Noble Auctions is auctioning no less than 17 classic pre-war and post-war Mercedes-Benz cars - and one 1932 Chevrolet Confederate Roadster - in its ‘A Private Mercedes Collection’o event.

The auction ends on December 15th, meaning that Christmas has come early in 2020 for classic Mercedes-Benz enthusiasts seeking to begin a collection or add to their existing garage.

‘A Private Mercedes Collection’ boasts a variety of interesting and rare classics from the Three Pointed Star’s back-catalogue, which includes a Mercedes-Benz’s 220S Ponton, and a 1934 170V Sport Roadster, which was awarded bronze in its class at the 2019 Pebble Beach Concours d’Elegance.

The majority of the cars have been lovingly restored by their current owner, and Axel Persoons - Noble Auctions managing partner - believes the eclectic history and varied models that make up ‘A Private Mercedes Collection’ will spark interest amongst classic Mercedes-Benz enthusiasts across the globe.

“The collector who owns these cars has always had a great passion for Mercedes’, old and new,” Persoons told Dyler.com. “Over a period of several decades, he acquired them from all over the world and he had no problem in travelling long distances to acquire a car that he longed after.

“Some of the cars in ‘A Private Mercedes Collection’ have Scandinavian provenance, whilst others came from Germany, France, Spain, and even the USA.

“We hope that the unique and personal histories behind each of these cars from the pre- and post-war eras will be of interest to classic Mercedes-Benz collectors around the world.”

It is estimated that the combined value of the collection will be around EUR 1,944,000. Noble Auctions predicts that the most expensive car to go under the hammer will be the 1934 Mercedes-Benz 170V Sport Roadster, which is expected to reach between EUR 250,000 to EUR 285,000.

Those interested in looking through the ‘A Private Mercedes Collection’ can do so via Dyler.com’s dedicated Noble Auctions page, or the Noble Auctions website. 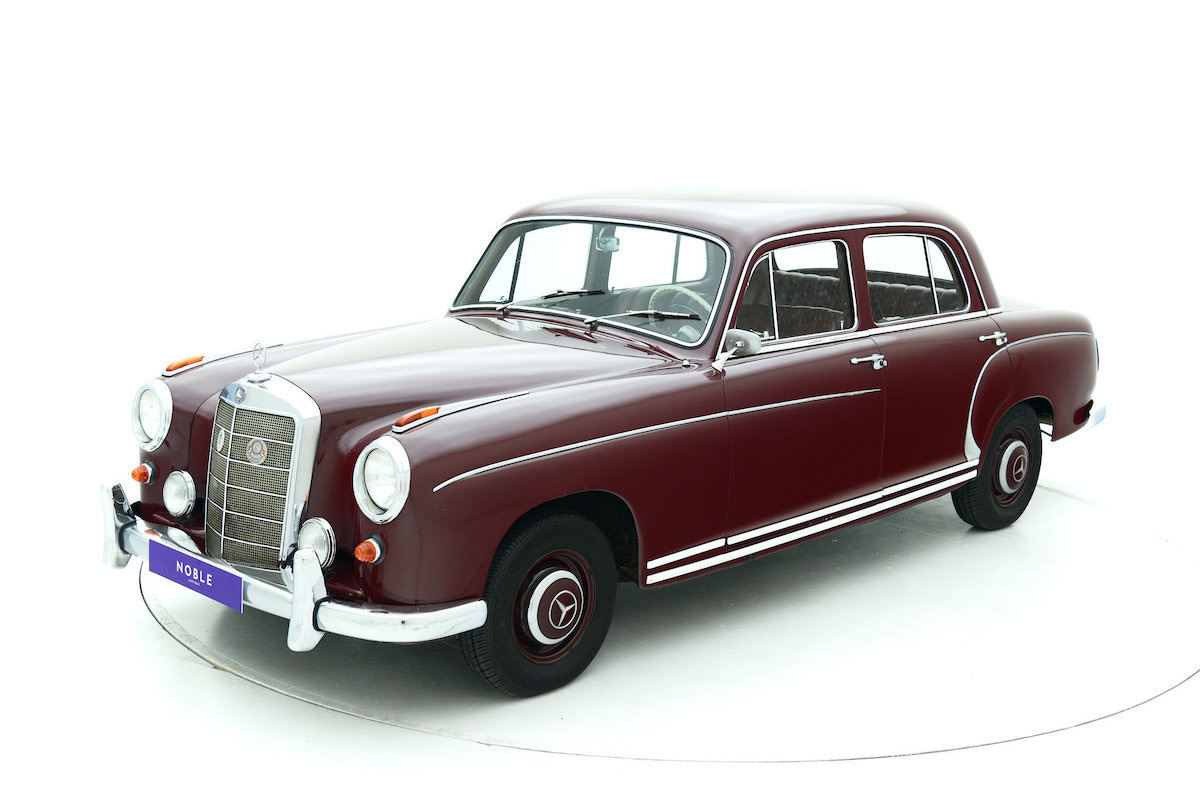 The Mercedes-Benz 220S is the great grandfather of the Mercedes S Class. Like the latest iteration of Mercedes’ flagship, the ‘Ponton’ was the bi-word in automotive luxury and performance when it launched in 1953. Unlike the rest of the cars that have made this list of classic Mercedes’, this six-cylinder luxury barge has been relatively unrestored. The only changes that the owner has made have been aesthetic - the original Graphitgrau body has been repainted into the tasteful burgundy you see here, and the interior has been retrimmed in brown vinyl. The car was originally delivered to its first owner in California, and since it was imported to the Netherlands, the owner has painstakingly sought to compile a file of the car’s maintenance records. Despite being over 60 years of age, this Ponton can still be enjoyed as a daily driver. 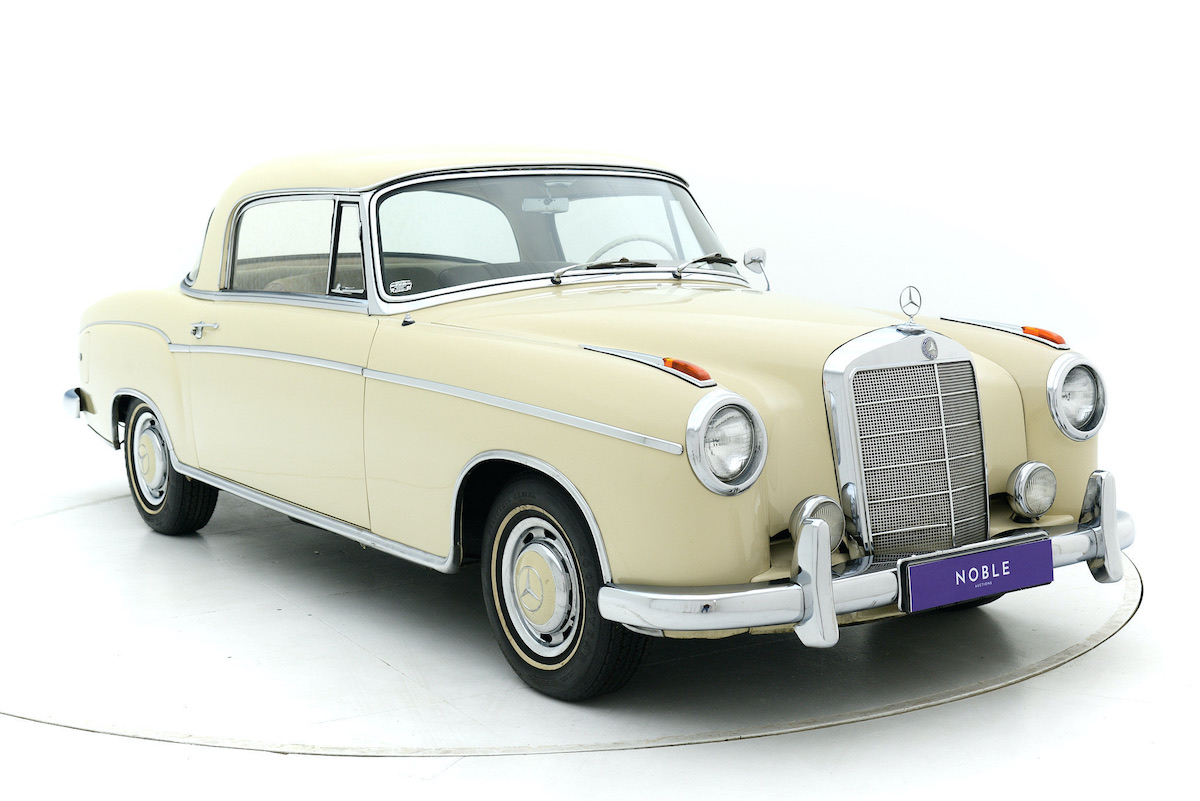 This classic Mercedes-Benz 220 SE Coupé also started its life in California, where it resided until 10 years ago. Since coming to Europe, the collector has lovingly restored the car to a high-standard inside and out, meaning it can be used as a daily driver. Under the skin, this Ponton’s fuel-injected inline six, 2.1-litre petrol engine has been completely rebuilt from the ground up, as has its four-speed manual gearbox. Step inside, and the seats have been completely re-upholstered in grey velour, whilst the original leather door panels remain. It is also worth adding that the car’s body has also been completely repainted in its original cream colour. For further piece of mind, please be aware that this car comes with a copy of all of its original documentation from its time in the United States. 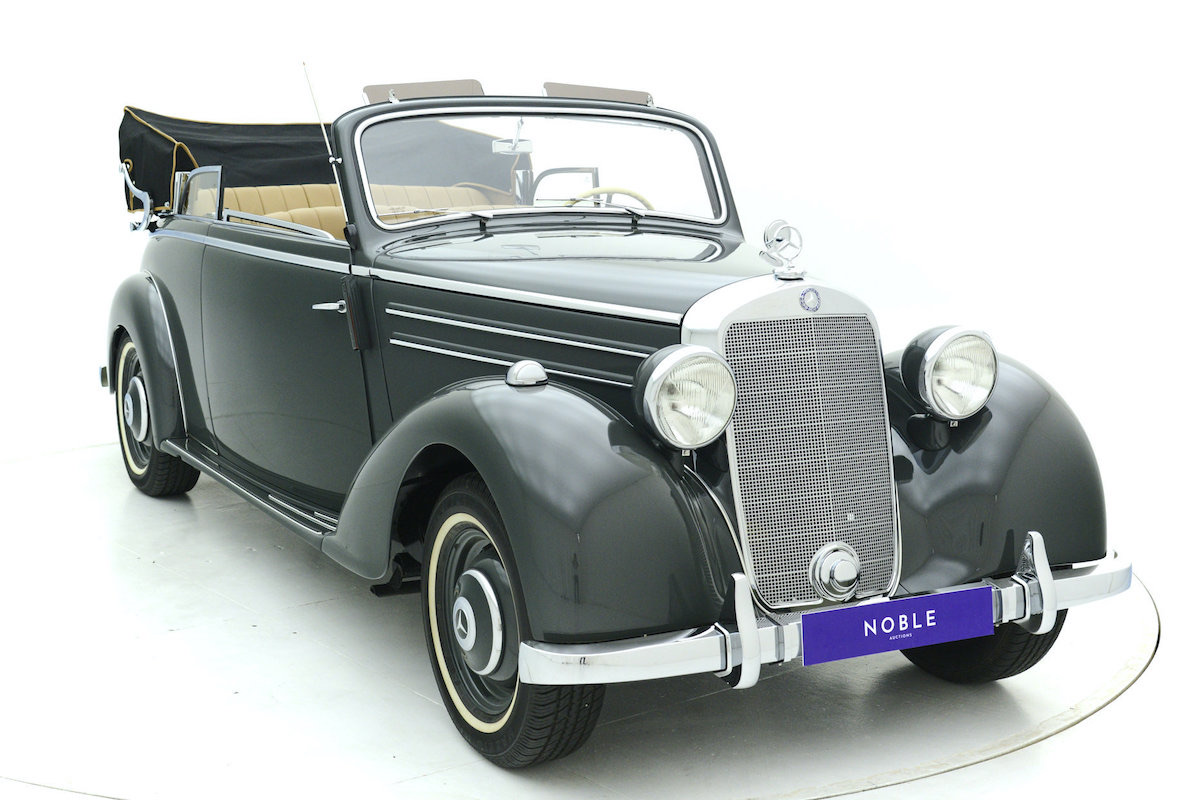 This 1950 Mercedes 170S has been completely restored to concourse standard, and is a stunning example of the craftsmanship put into a post-war Mercedes-Benz. The car was sourced from Germany, yet it currently resides in the Netherlands on Dutch plates, meaning it can be easily registered in any EU country. The bare-metal restoration on this period droptop has been meticulously inside and out, and its four-cylinder, 1.8-litre petrol engine and four-speed manual transmission were completely stripped and rebuilt during the restoration process. The graphite grey paintwork has been reproduced to original standards, and the beige leather interior has been retrimmed using the highest-quality materials available. 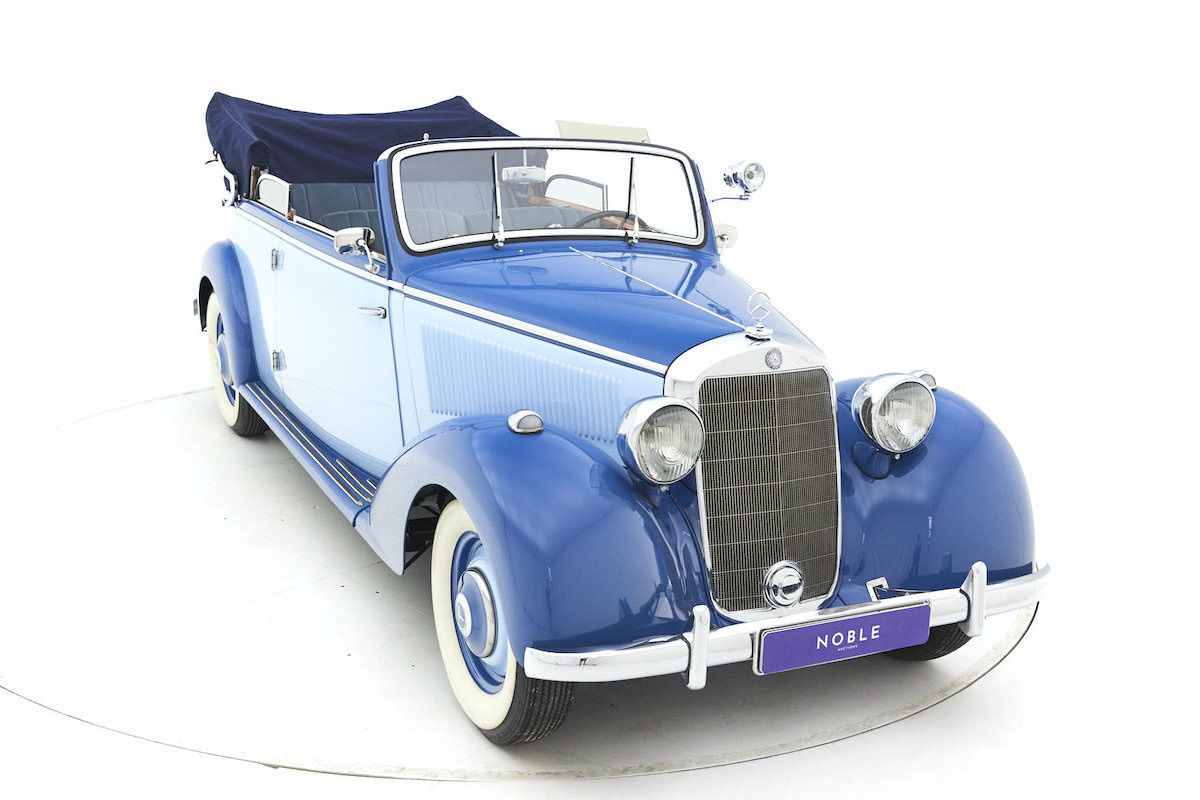 This stunning 1936 Mercedes 230 Cabriolet B is one of a series of classic, pre-war Mercedes’ available as part of the ‘A Private Mercedes Collection’ auction. An extremely rare model, this stunning two-tone blue car has been restored inside and out to an excellent standard, and can be used as a daily driver or a showpiece. Under the hood is a lusty, 2.3-litre straight-six motor, which is mated to a four-speed manual gearbox. The owner sourced this 230 Cabriolet B in France, and since importing it to the Netherlands, it has been issued with Dutch registration documents. 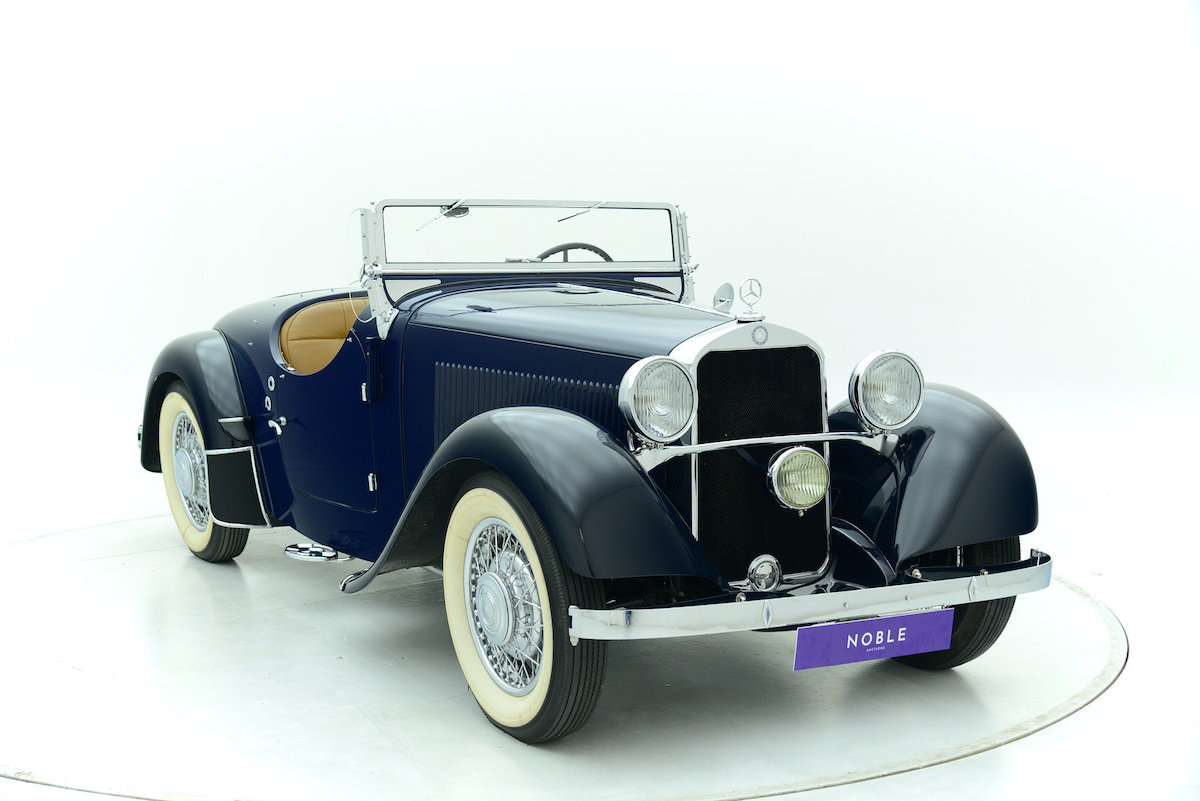 This beautiful 1934 170V Sports Roadster is one of the most exclusive pre-war classic Mercedes’ to go under the hammer at ‘A Private Mercedes Collection’. There is only one of these models remaining in the world, and you are looking at it right now. The car was originally purchased in Germany, and it was hidden by its owner during World War II. After the conflict, the Sports Roadster was found and purchased by a U.S. Army captain who was serving in post-war Germany. At the end of his tour in Europe, he exported it to the United States where it was well-loved until 2007 when it was purchased by the current owners. For the last 13 years, this stunning pre-war car has spent its life in the Netherlands where its biscuit-coloured interior and hand-built, two-tone blue coachwork was fully restored to its original glory. The final piece in the puzzle of this car’s remarkable past is that it finished third in class at the 2019 Pebble Beach Concours d’Elegance. Noble Auctions anticipates that this beautiful vehicle will be the most expensive car to sell during the ‘A Private Mercedes Collection’ auction.