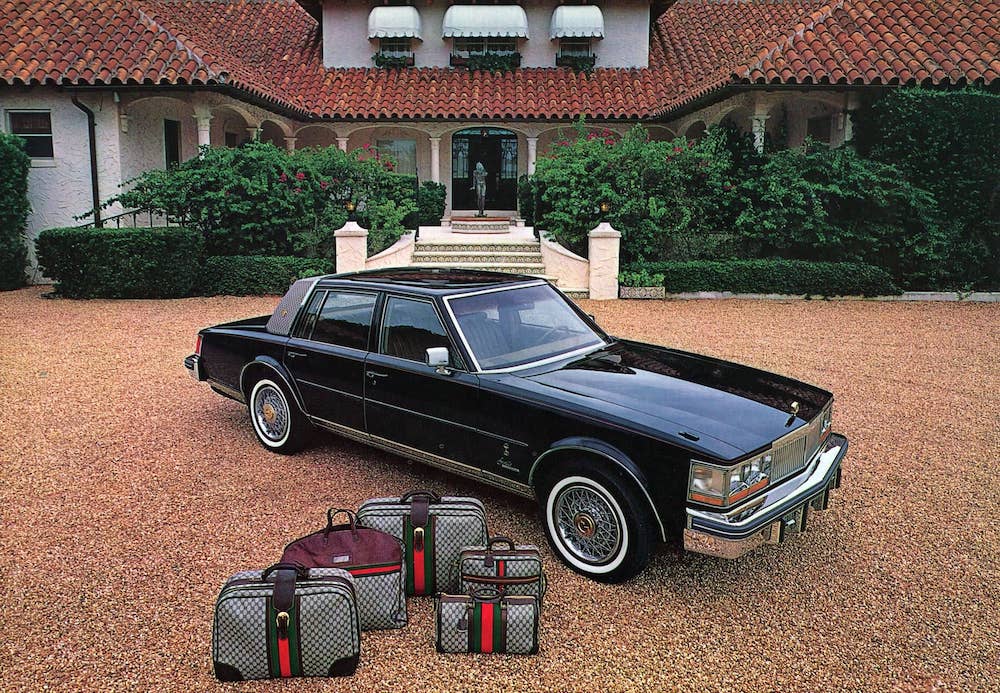 As of January 17 2023, the great and the good from the world of high fashion will converge for Paris Fashion Week 2023. Excellent news, if you’re into that sort of thing.

Now, as you may have noticed, Dyler.com is a car website, so we’ll not be covering Paris Fashion Week. What we have done, though, is compile a two-part feature in which we look at what happens when fashion houses and car manufacturers get together.

So, if ever you needed evidence as to why we should trust car designers to do their job - a similar analogy would be taking your own condiments to a restaurant - here it is. 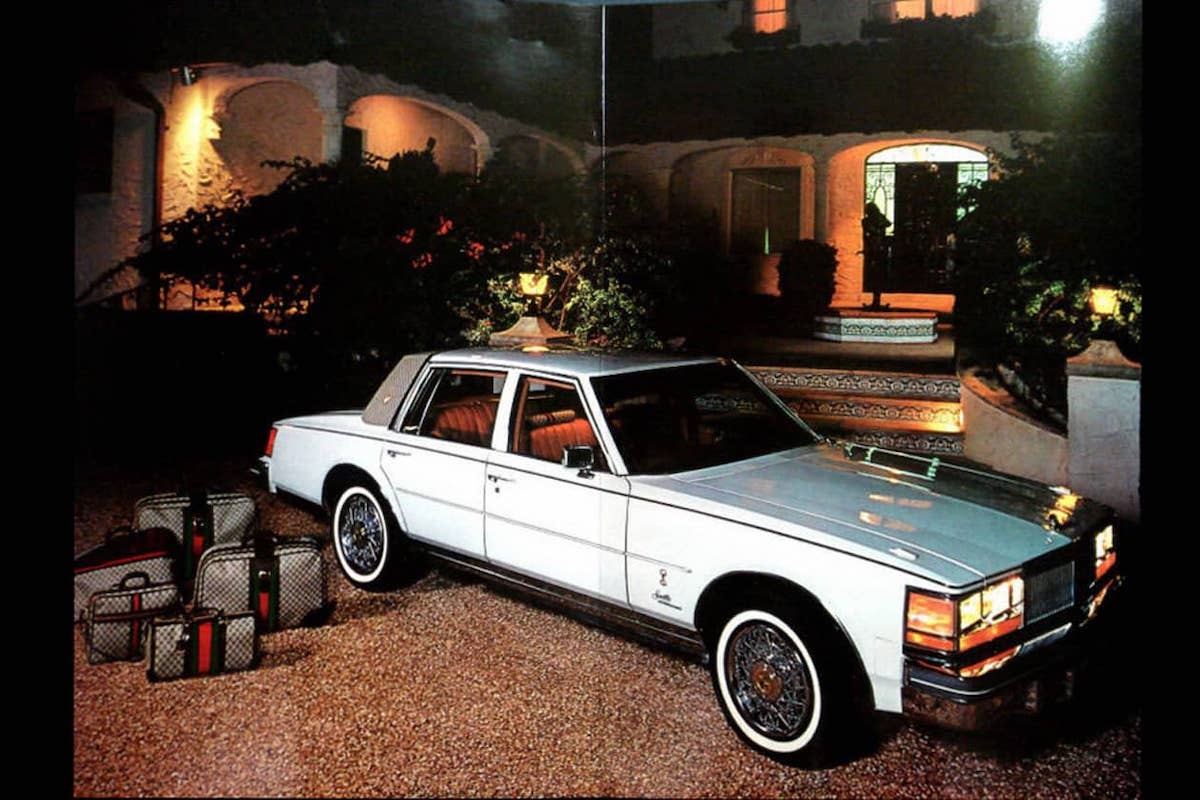 With a white paint job and a plethora of gold logos, the Cadillac Seville by Gucci was as tasteful as Katie Price’s downstairs bog
© Classic Driver

Launched in 1978, the Cadillac Seville by Gucci is the first example of ‘70s America at its most self-indulgent. The Gucci Caddy started life as a standard version of the GM-owned brand’s midsize luxury flagship sedan, and when it was finished, it would be sent to Gucci HQ where it was given a makeover in-line with fashionable consumer tastes of the time. According to then-Gucci chairman Aldo Gucci, “the [Gucci] styling we have created for this car gives the few fortunate owners a rare possession of distinction, beauty, and ultimate luxury.” In other words, the already-chintzy Cadillac Seville went full jingle-jangle, and received the following: a Gucci hood ornament, which was - of course - finished in gold, plus additional gold Gucci logos on the wire wheels, front fenders and C-Pillar. Meanwhile, the Italian brand’s trademark green and red stripes were laid across the boot. Inside, Gucci materials were fitted to the headrests, armrests, roof lining, and floor mats, whilst a Gucci badge took pride of place in the centre of the steering wheel. But was that enough Gucciness for this bastion of automotive high fashion? Remember that this was the ‘70s, and excess was the order of the day, so no. No it was not, and a five-piece Gucci luggage set was stowed in the boot for good measure. The Seville by Gucci was only available in white, black, or brown and the inaugural 1978 car had a price tag of $19,900, or $90,957 in 2023. The following year, this figure rose to $22,900, which is around $104,669 today. 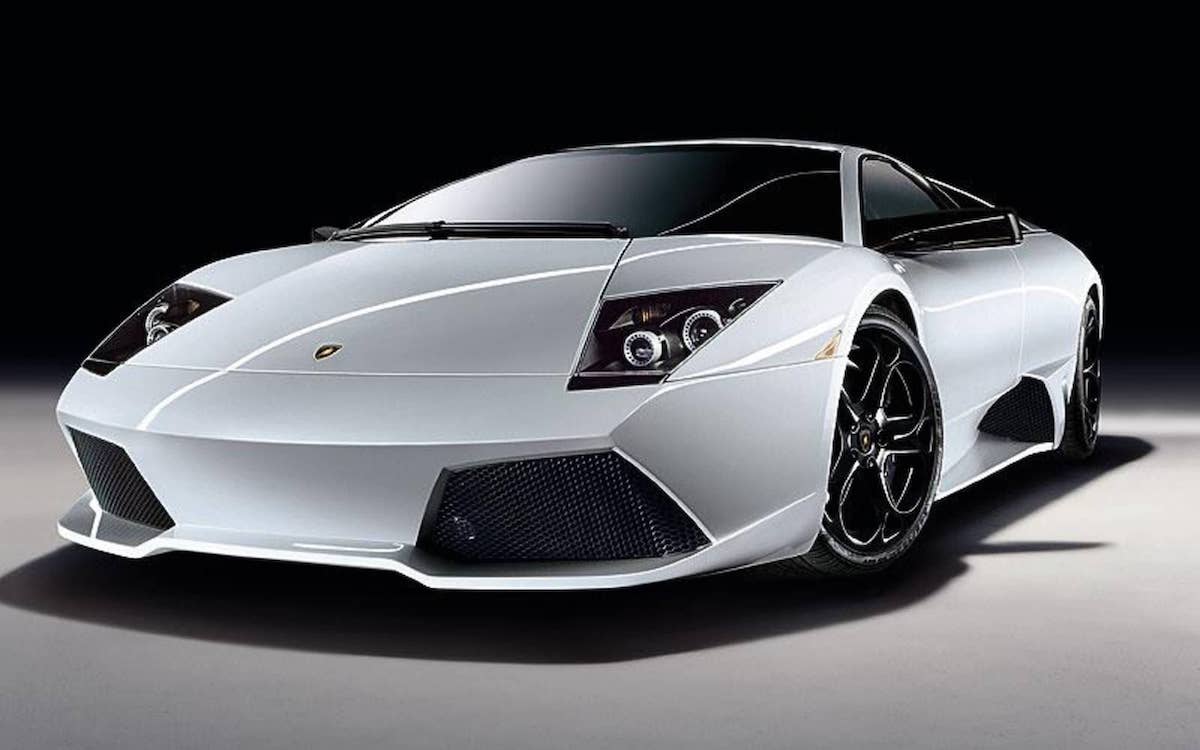 Of course Lamborghini teamed up with Versace, of course it did - what else did you expect?
© AutoWeek

With the exception of the Miura, there are few things in the automotive world as obnoxious as a Lamborghini. That considered, what did the Audi-owned supercar maker do to tone down a special edition of its 6.5 litre V12-powered Murcielago LP640 to appeal to a more discerning demographic of buyers? Nothing. Absolutely nothing. In fact, it did the total opposite and teamed up with Versace, a fashion brand equally as high-regarded as Lamborghini for its subtle approach to things. The Italian fashion brand’s ‘Ad Personam’ or personalisation department covered the interior with Nappa leather and slapped its Medusa all over the shop with reckless abandon. The car also sits on black carbon fibre ‘Hermera’ wheels and a glass engine cover. Only 20 of these Murcielagos were made, so of course it had a restrained asking price of $1m. Most likely popular in Dubai and amongst people who like Andrew Tate. 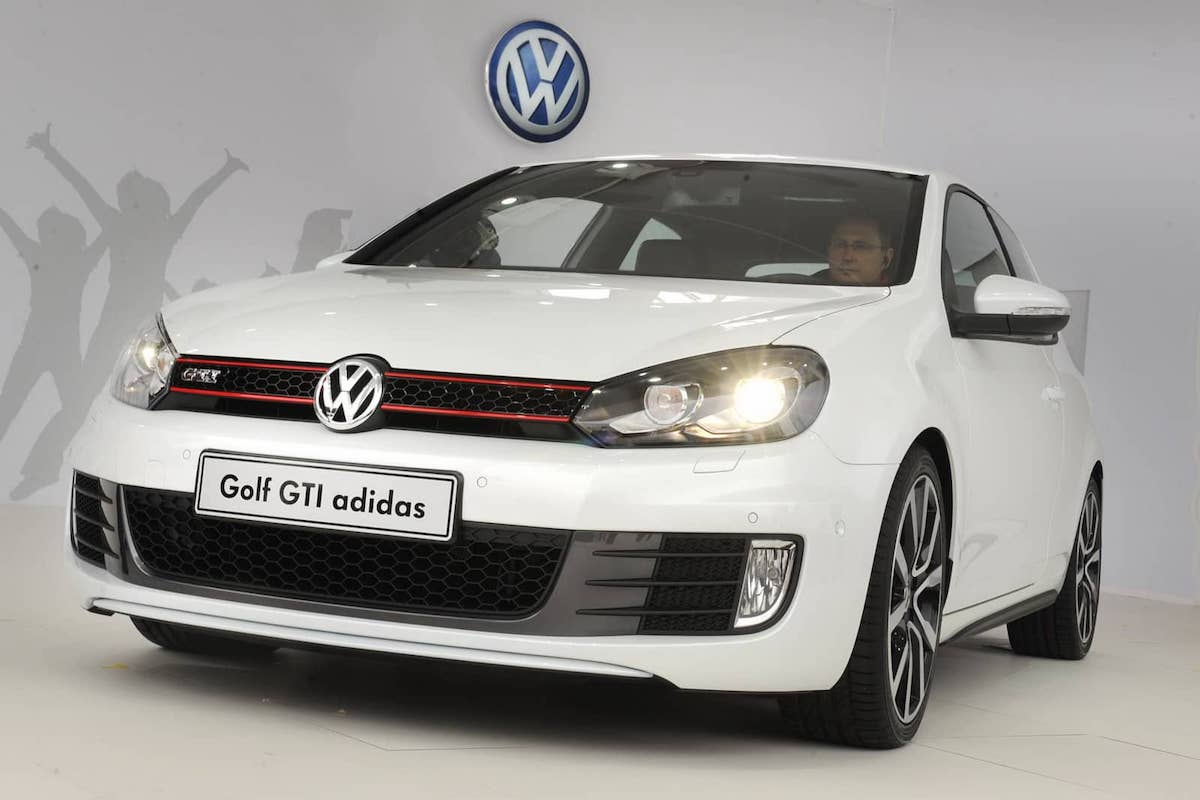 Understated and as dependable as a pair of Hamburg trainers, the Volkswagen Golf GTI Adidas Edition is definitely the least unpleasant option here
© Volkswagen Newsroom

The Volkswagen Golf GTI has long-been the thinking person’s hot hatch. It has a four decades-long pedigree of being both dependable and spirited, and it’s also sporty without being shouty. No surprises then, that when Volkswagen decided it wanted a fashion-inspired version of its eponymous hot hatch, it approached German brand Adidas, the purveyors of fine-yet-sturdy tracksuits and the Hamburg; a trainer so indestructible, it has - along with Keith Richards and the Toyota - the ability to survive a nuclear holocaust. So what Adidasiation did the Mk6 Golf GTI receive? In truth, not a lot. In fact, the only marked influence that the brand has was its iconic three stripes on the seats, which are finished in red, white, and black. Whilst we’re unable to verify the claims, it’s also said that the Golf GTI Adidas Edition came included with a hardbass album in the CD player as standard. 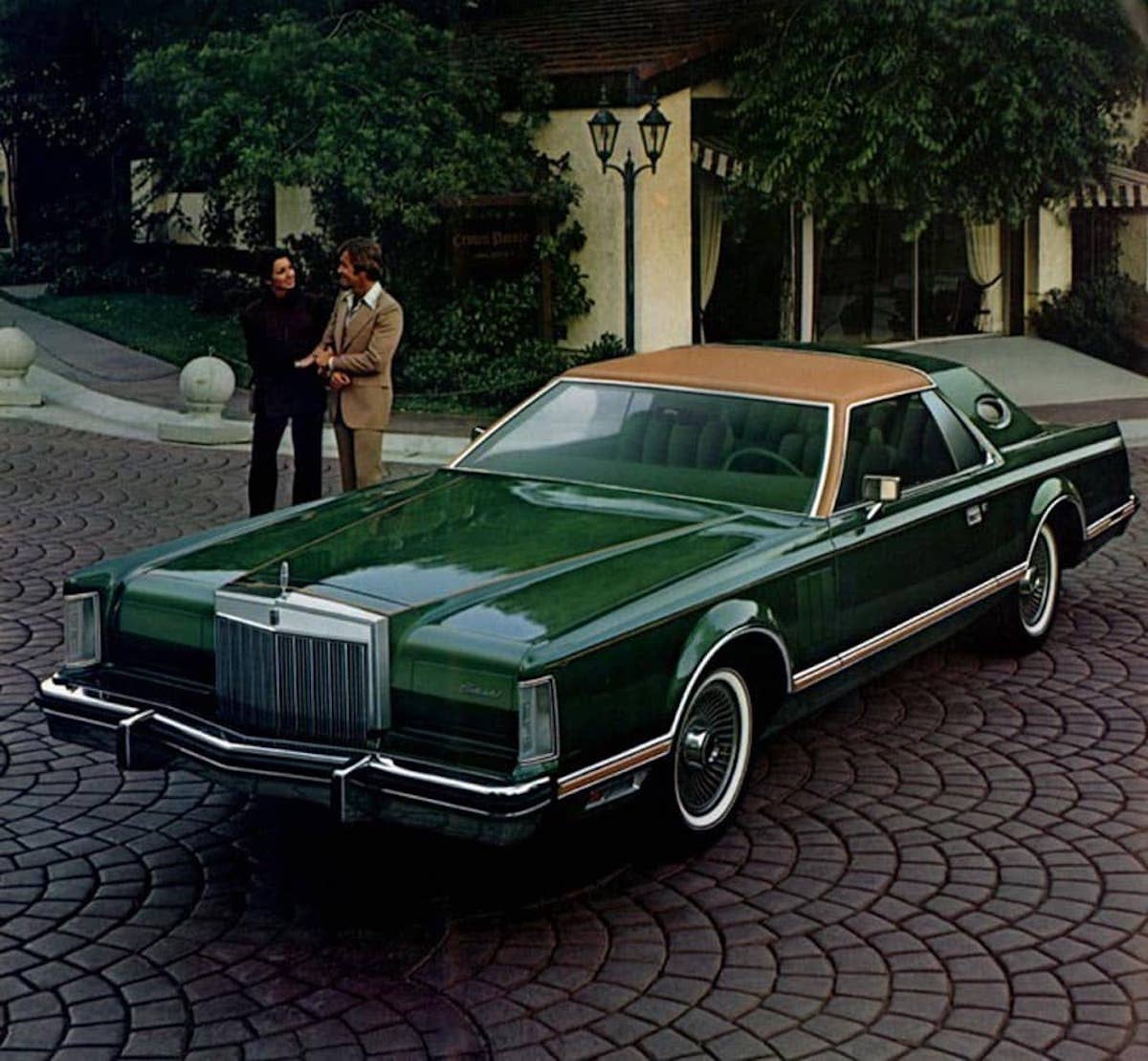 Slow, gaudy, and way too big, could the Lincoln Continental MkV Givenchy actually be more revolting than the Cadillac Seville by Gucci?
© Motor Authority

It’s back to the ‘70s again. This time we’re looking at the Lincoln Continental MkV Givenchy Edition, another land-yacht from the American car industry’s era of malaise and unconstrained opulence. Yet before we get into the influence of the French luxury fashion and perfume house over this six-metre long, 6.5-feet wide car, let’s consider some numbers. The 1979 Lincoln Continental MkV was available with two V8 engines, a 6.6L and a 7.7L which produced… 166bhp and 212bhp respectively in a car weighing over 2,000kg. Still, the piss poor performance was good news if you ordered the Givenchy package, which added an additional $2,145 (that’s $9,804 in today’s money) to the car’s base price of $13,300 (that’s $59,419 in today’s money) because you would be moving slow enough to truly breathe in the splendour and tastefulness of the gold Givenchy plaque on the dashboard… and the interior which was colour coordinated with the designer-inspired exterior paint job; an aesthetic feature no doubt enjoyed by envious, less-wealthy passers by. To further distinguish yourself from the surrounding poor who the economic crisis of the ‘70s had hit, the Givenchy-spec car had the brand’s ‘G’ logo in place of the Lincoln badge on the hood, plus further ‘G’ logos on the boot and MkV Continental’s signature opera windows at the back. Thankfully, like mushroom vol-au-vents, prog rock, and carpeted bathrooms, the Continental MkV Givenchy has long-been consigned to the dustbin of 1970s tat.

If, however, you are now feeling like a true fashionista and are overwhelmed by an irresistible urge to own any of the cars from this list, click here to browse the thousands of listings we have on Dyler.com.