Electric Cars: the Future From the Past

Ever since Elon Musk put the Tesla brand on the roads, electric car mania has been sweeping the globe. The number of electric models has grown noticeably in recent years, and more and more manufacturers are announcing that they will be launching their own electric cars in the near future. It might seem like the electric car is just a fad of the early 21st century that is destined to conquer the future, but that's not completely right. Since the appearance of the car in the late 19th century, numerous attempts have been made with varying degrees of success to persuade drivers to give up internal combustion engines, and failures to do so led to the emergence of various conspiracy theories.

The very first known attempts to develop electric drive vehicles go back to when there was still no such thing as a car, and it was predicted that London and Paris would drown in a sea of manure in the next 50 years due to the huge number of horses being used. In 1828, Hungarian engineer Ányos Jedlik built the first engine in the world to be powered by electric impulses and mounted it in a self-propelled toy. A few other inventors also tried various combinations of small toys and electric motors until a discovery was made in the 19th century that set off the golden age of electric cars. 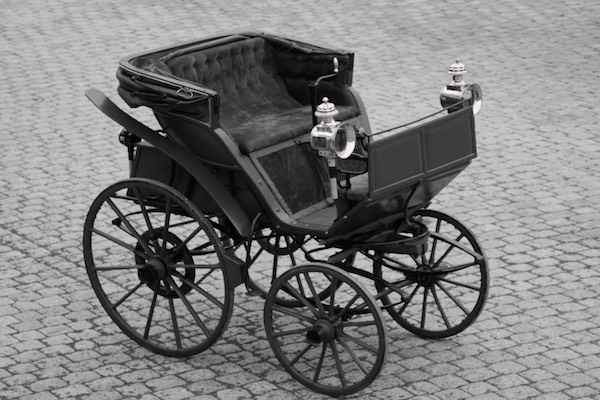 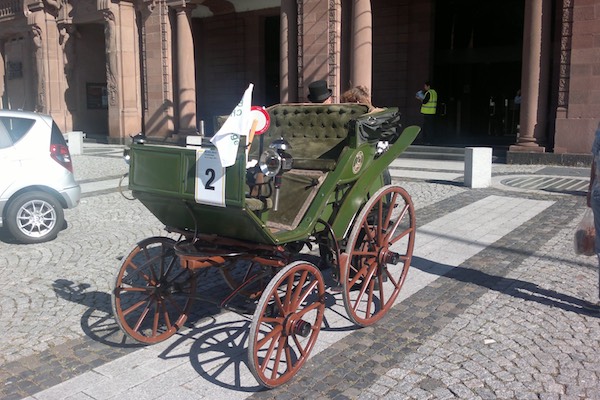 Rechargeable electric batteries that didn't take up half of the British Empire and could fit in a car were invented in 1859 by French chemist Gaston Planté; after a dozen or so years of improving their capabilities, the realisation quickly came about that these could replace the horse. The first signs appeared in France and the United Kingdom, and the first German electric cars came out shortly after the invention of the car itself – in 1888. At that time, they still looked like carriages without horses and their top speed was no more than that of a modern electric scooter, but it was huge progress compared to the expensive and unwieldy gasoline-powered cars with their abundance of handles and pedals.

Even though we always imagine the United States as a place represented by a cruiser from Detroit with a massive engine, the situation in that country was completely different at the beginning of the 20th century. The first electrically powered "American" was created by William Morisson in1890. His six-passenger wagon (most gasoline cars were two- or three-seaters) was capable of reaching a speed of 23 km/h. That's not bad compared to the internal-combustion engine cars that could only reach about 15 km/h. 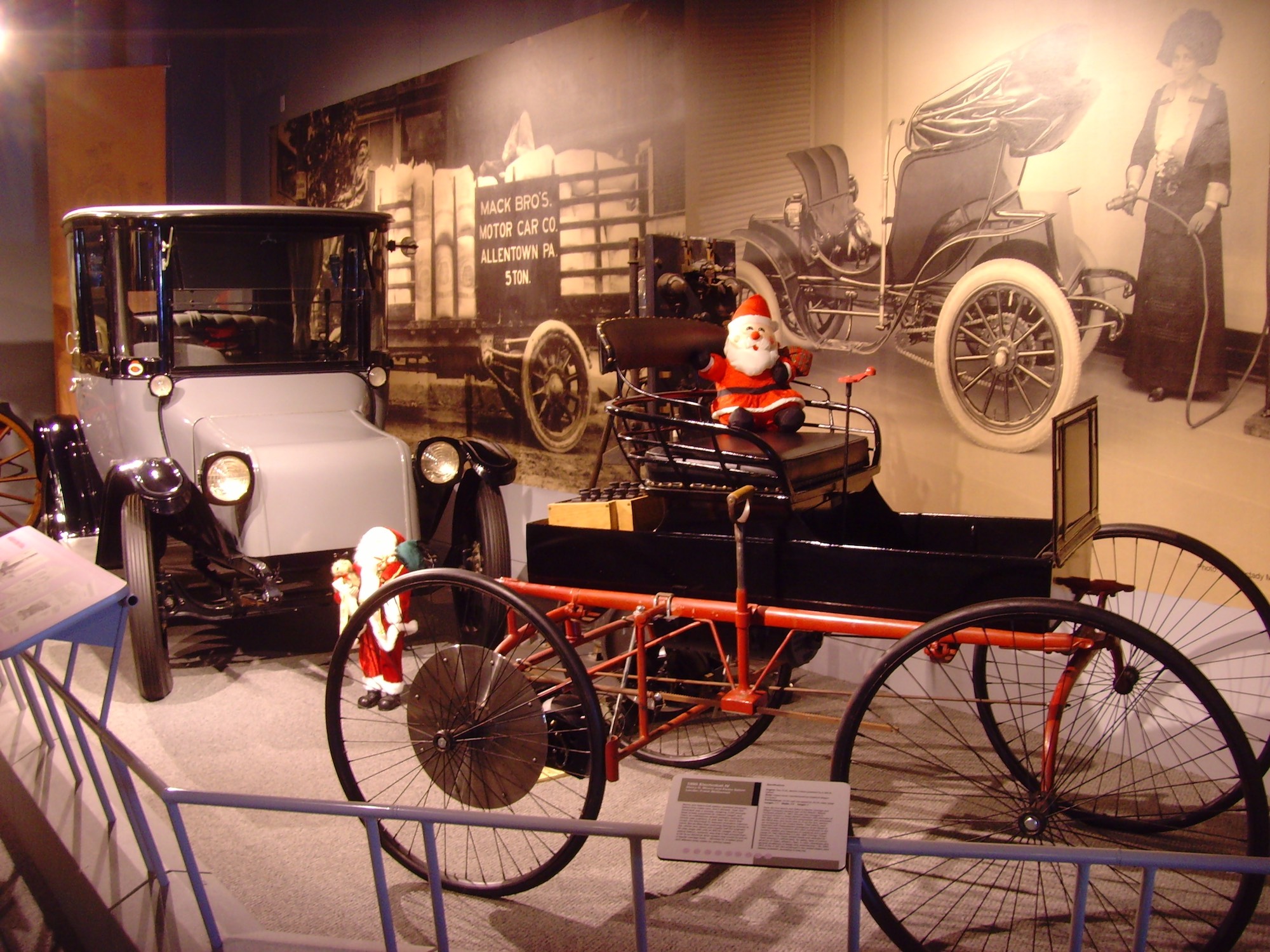 Just 10 years later, in 1900, electric cars accounted for a third of all vehicles on American roads. And if you think New York City is a really modern because it plans on moving to electrically powered cabs in the future, then you think wrong – over a century ago, a fleet of 62 electric taxis was operating in New York in that same year of 1900. London had a fleet of these cabs for three years – in 1897, Walter C. Bersey designed 12 horseless carriages powered by electric and put them on the streets of the capital of what was then the most powerful empire in the world. The golden age of electric cars had begun. A New York Times article from 1911 reported: “The designers of electric passenger car-carrying vehicles have made great advances in the past few years, and these machines have retained all their early popularity and are steadily growing in favor with both men and women.” 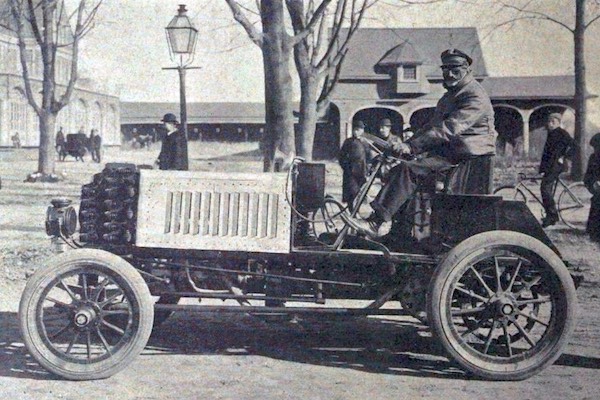 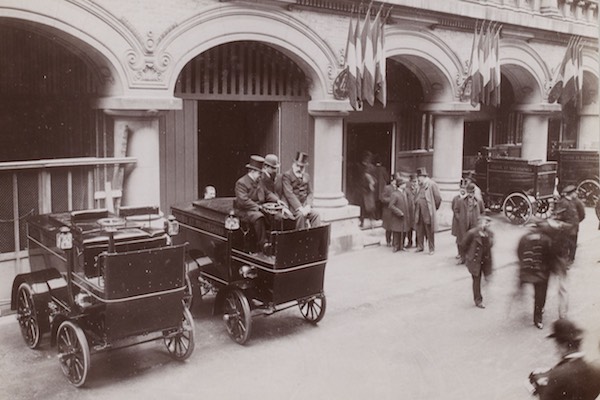 The rise and the fall

The popularity of electric cars back then was due to several reasons. They were simple in design, quiet, and most importantly – they didn't need a manual crank to start like the ones that protruded from the front of the first horseless carriages like Pinocchio's nose. This made the electric car particularly popular among women of society (especially since the considerable price meant that ordinary people could hardly afford an electric car). And with the industry developing rapidly, the technical capabilities of electric vehicles began to distance even further from the smoking internal combustion engines. 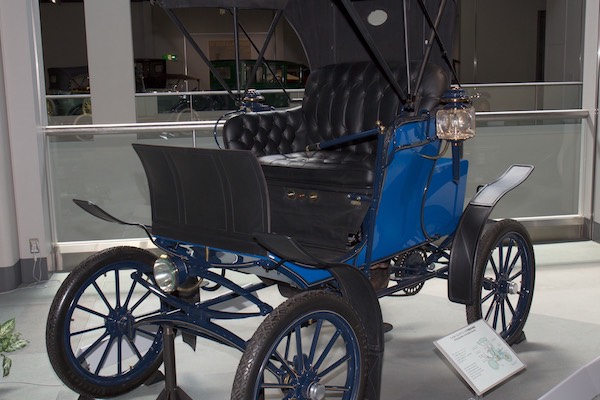 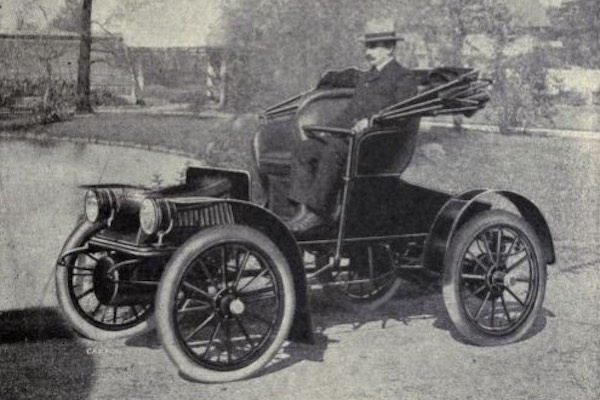 For example, up until 1902, the land speed record belonged to an electric vehicle which was also the first vehicle to break the 100 km/h barrier. The internal combustion engine suffered another blow when this land speed record was broken by a steam-powered vehicle. Together with the top speed, the distance that electric cars could cover also increased. The first ones only had a range of a few dozen miles, but the growing competition encouraged progress. In 1899, two American engineers went over 100 miles (160 km) with a single charge, and in 1909, Emil Gruenfeldt covered a whole160 miles with an electric car from Baker Motor Vehicle Company – a range that modern electric cars sometimes can't even produce. 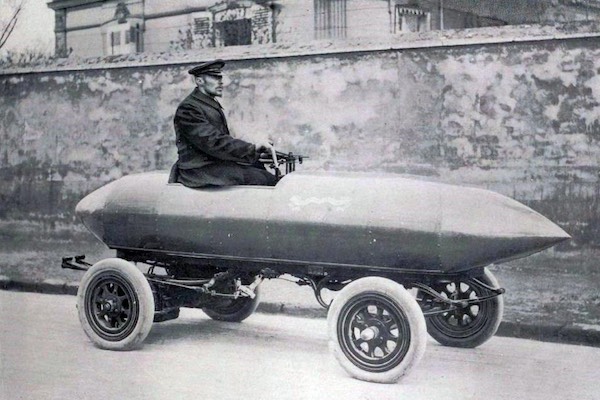 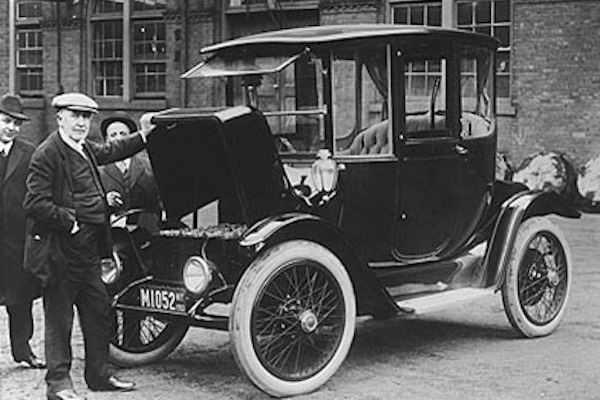 And just when it seemed that electric vehicles were destined for a bright future, Henry Ford gave them a taste of the brutal here and now. In 1908, the Ford T only cost $850 and got cheaper and cheaper with time. And Detroit also invented an electric starter that made it possible to start to the engine without having to do a morning manual crank workout. With oil being discovered regularly, better roads that were almost endless for gasoline cars, and most importantly – the low price (as opposed to the electric car which cost around $2,000 in 1912, which is about 50,000 in today's dollars), gasoline cars took the lead. Manufacturers quickly went bankrupt, and not a single running electric car was left in the US by 1935.

For the next 40 years, the concept of electric vehicles was left to trolleybuses and bumper cars. The first ideas for the revival of the electric car began to float when the world was shaken by the oil crisis and the cost of fuelling a gas guzzler from Detroit could equal the GDP of a small country. The first to experiment was American Motors Corporation (AMC), which produced a few test Gremlins that were electrically powered, but they didn't take off – probably because the conventional car could offer a better range. And once Ronald Reagan became president, fuel prices reached decade lows and high-capacity engines returned to the roads. This situation continued until the mid '90s, when the world started to get concerned about the air pollution caused by internal combustion engines.

The unexpected discontinuation of the GM EV1 project

And then there was a sensation. The largest automotive company in the world decided to radically change course and introduced the first modern production electric car in 1996 – the General Motors EV1! With its futuristic design, the EV1 was basically no different from the GM Impact concept that GM CEO Roger Smith demonstrated at the 1990 LA Auto Show to gauge the public's reaction to such a non-traditional car. Impressed with the feedback, Smith announced in April of the same year that the Impact would become a production vehicle.

After the prototype testing programme that lasted until the beginning of the 1996, the first EV1s reached drivers at the end of the same year. Since the vehicles were presented to users according to the General Motors pilot programme, the cars themselves actually remained the property of General Motors, being leased to users for about $500 per month. GM only leased 288 EV1s by 1999. Even though it looked futuristic, its batteries were produced with outdated manufacturing technology, and this, paired with the relatively powerful engine (137 hp), resulted in a low range (70–90 miles, or about 150 km). 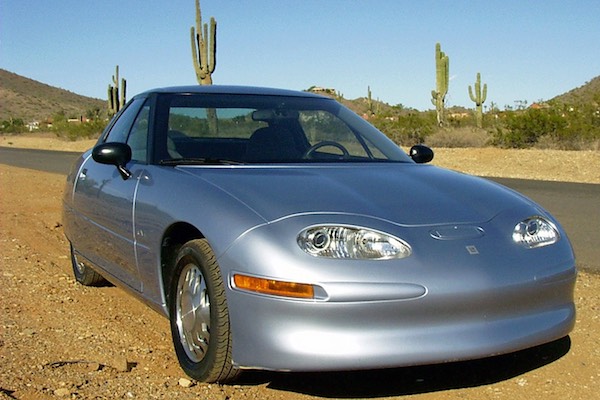 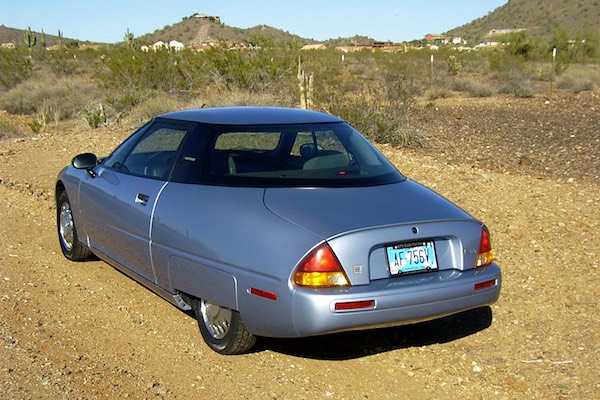 The situation could have been remedied by the second-generation EV1 that was released in 1999 and was capable of covering over 200 km with a single charge. There were hundreds of people on the EV1 waiting list who wanted to participate in the pilot programme when GM suddenly cancelled it without any explanation. All of the cars were reclaimed from the drivers and destroyed, with only a small number being left to museums and collections, and even then it was under the condition that the cars could never be operated. 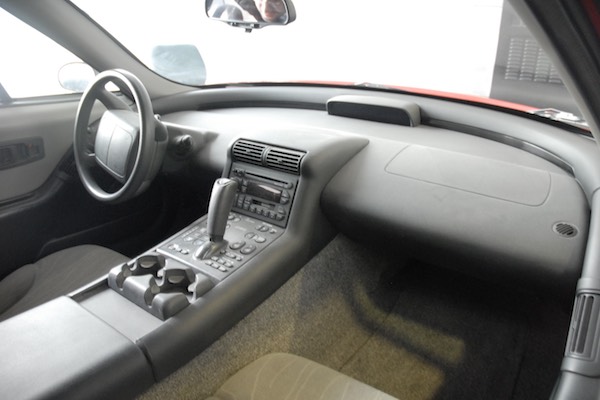 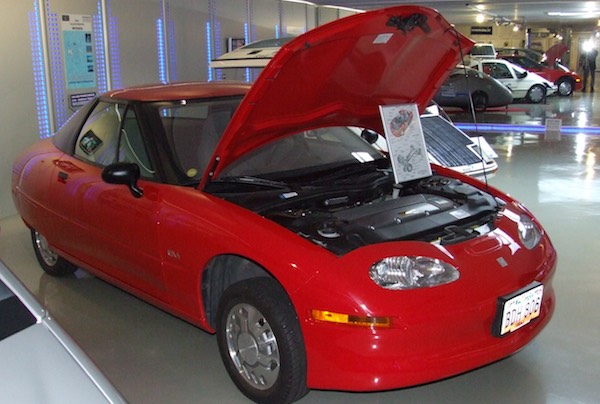 It's not surprising that such a strange ending for the project resulted in numerous conspiracy theories, the most popular of which is that GM gave in to pressure from the oil industry and decided to kill the electric car idea in favour of fossil fuel vehicles. Another theory is that GM designed an unsuccessful electric car with poor battery life on purpose in an effort to discredit this idea for good, and again – to serve the interests of the oil companies.

However, it seems that these conspiracy theories are not in line with reality. Although the first electric cars couldn't compete with the gasoline-powered competition and the GM EV1 project was trashed, electric cars are experiencing a real revival this decade and have a bright future in front of them.