A car from the golf club

While my friend and I were finishing our jobs in Corolla, North Carolina we started to hatch plans for our own Hollywood inspired journey. Unfortunately there was hardly any time to actually plan it properly – only a week’s worth of evenings and lunch breaks. We had no car, no itinerary, nor anyone’s help. Unless sharing a rumor counts as help. My Belarusian colleague mentioned that his Russian friend had a car which she was not using. At this point I and my journey pall divided tasks: my responsibility was getting a vehicle and his was sketching a route for it.

Puddle under the pedals

Here is what information I received about the car: it was some product of the Chrysler Corporation which was last used a year ago. Now it was sitting next to a golf maintenance shed 7 kilometers away from our apartment. It took quite some effort to actually see the car but finally there it was a 1994 Chrysler in all it's 90's glory. Dent-adjusted aerodynamic lines, purple-like color which was not being protected by a clear coat anymore. "This only adds character" I thought. When buying a car thinking this positive will usually lead to unrealistic evaluations, but according to the internet the closest cars for sale were 300 kilometers away and were way over the budget. So I kept my positive thoughts and sat inside where my feet were greeted by a puddle under the pedals. This was only due to the sunroof not being fully closed. Excluding a few fittings that were divorcing the car the rest of the interior was fine. Fortunately no divorce cases were filed at the engine compartment. Under the purple bonnet slept a 3.5l 24 valve SOCH V6 engine, which was quite easily awakened by a new battery. 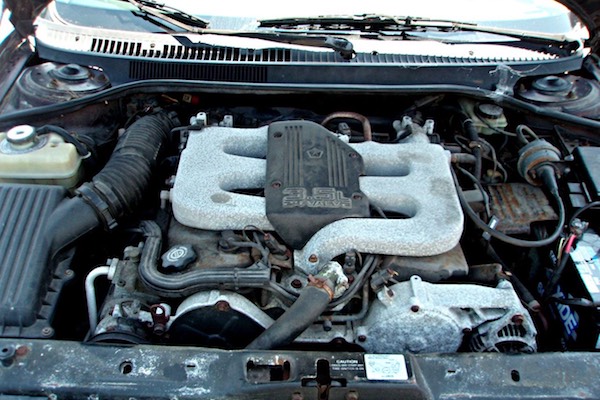 The OVH 3.5 V6 was easily awakened by the new battery
© AutoAgitator 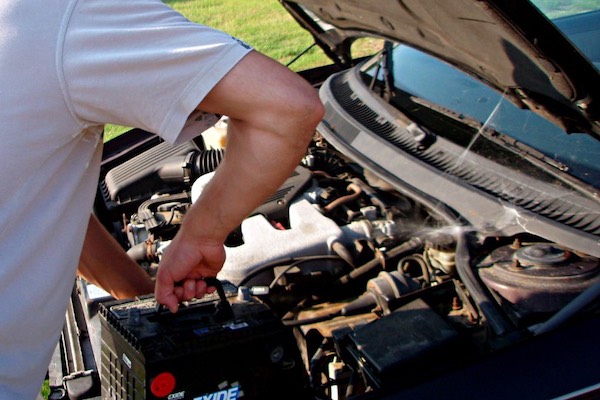 There was no time to waste the power created by this engine so I gingerly selected reverse to drive the car out of the jungle that has surrounded it. When the brakes were released there was no movement. Applying little pressure on the gas pedal did not do much either, so considerably more pressure was used. The Chrysler pondered a bit and jerked forward. This jerky motion could get stressful over time so after a little detective’s work a solution was found. The car was parked on a slope which helped the transmission fluid to seep out. After a quick refill it started to function almost like in the days of its youth. Everything else was quite alright as well: the front wheels listened to the steering wheel like a rebel teen listens to his parents, brakes transformed kinetic energy into heat and the instrument cluster lighting provided good illumination of the inoperative instruments. The driver’s window was requested to descend into the door to leave space for my forearm to collect rays from the North Carolina sun as I drove back home. 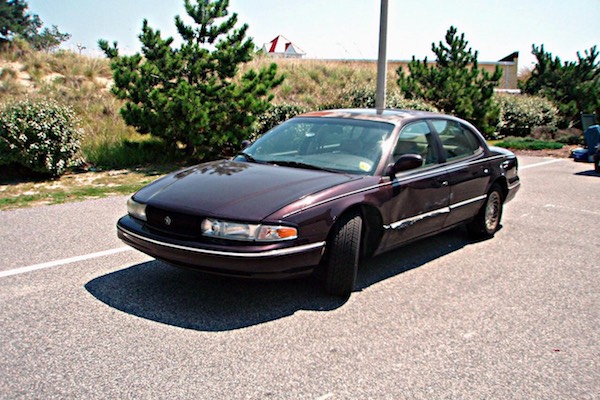 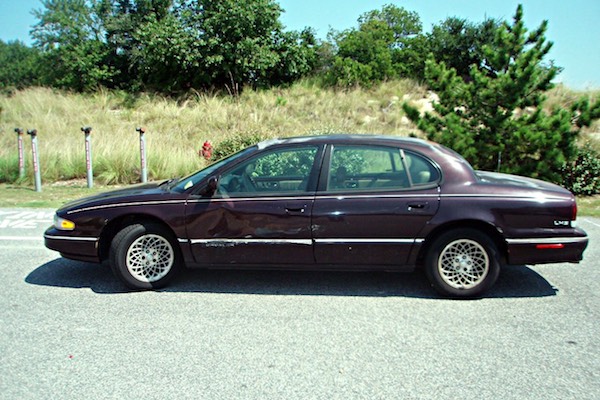 After introducing my fellow traveler with this gem of a car it became obvious that he did not share the same level of enthusiasm as me. Time was needed to fully understand the true value of our vehicle. Time was also needed to acquire license plates, insurance and certificate of title. The pink slips were easy as they were taken care of at a local bank. Insuring the LHS via internet was pretty straight forward as well. Only the cost of it was difficult to comprehend 1200$ for half a year. This was 930$ more than the car itself. At least the license plates were cheap at 28$. They were issued by the Division Of motor vehicles or DMV. Though to get them a challenging 60 kilometer drive awaited. In most parts of south-east USA only the rear license plate is mandatory. The front ones are used for patriotic state symbols, catchy puns or political views. I did not have time for any of that but I did put a sign behind the rear windshield with three letters indicating my destination – DMV. This was either very clever or the American drivers are very understanding. At least on this part of the east coast everyone is driving exemplary with respect to other road users as if they left their egos at home. The DMV also was rather modest, the license plates were handed out from a wooden kiosk hidden in the darkest corner of a shopping center. 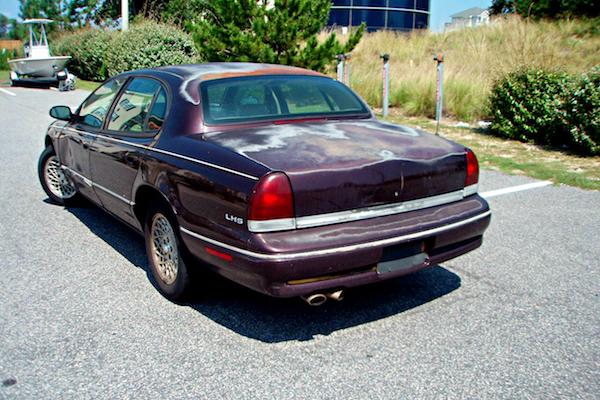 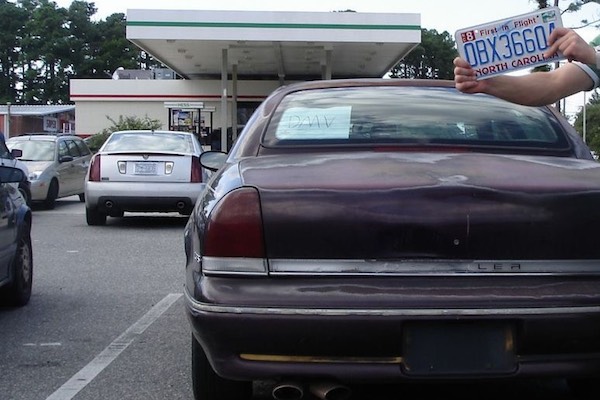 Roadworthiness and its relevance is also an interesting thing. Although it is necessary to do a vehicle check-up annually and it can be done at almost any service station, no one will find the certificate interesting. Not even the highway patrol. Nevertheless most locals take care of their vehicles thoroughly. I do not recall seeing leaking cars or oil marks at car parks. In Corolla there is even a designated part of the beach where it is legal to utilize your four wheel drive and search for wild horses. Unfortunately our Chrysler V6 was only rotating the front wheels so this time we rotated them in the other direction.

Now on navigator duty my colleague sketched the following route: Corolla, NC – Kitty Hawk, NC – Williamsburg, VA – Washington, DC – Buffalo, NY – Manhattan, NY. Only a little over 1000 miles or 1620 kilometers in under one week. The ardor to reach our destination was even higher when our boss told us that we should fail. I believe that William and Orville Wright heard the same line more than once when they were building the first manned aerodyne in Kitty Hawk - our first destination. 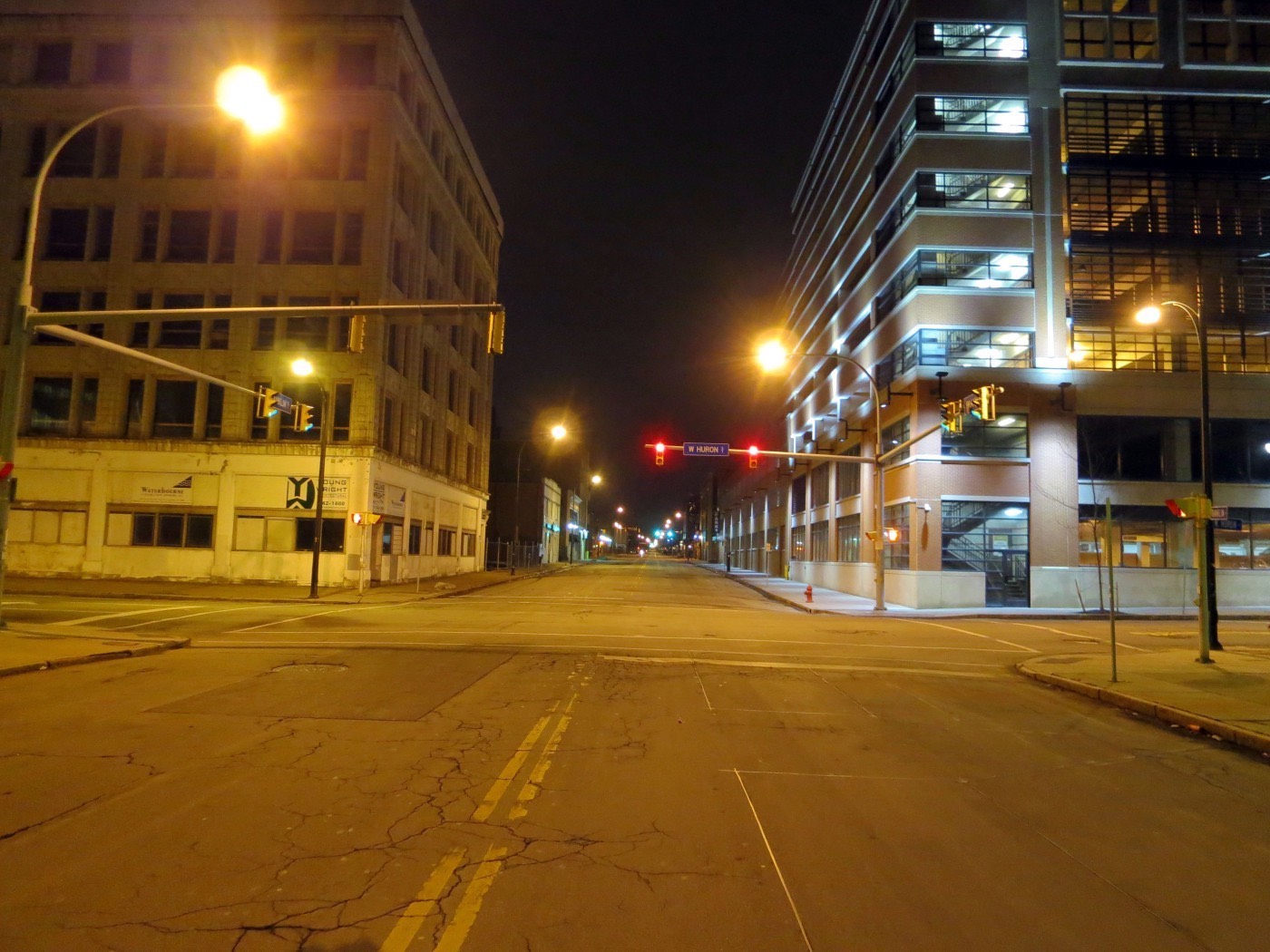 
On the East Coast with a 90s Classic. PART II: The Journey