The Golden Years of Jensen

It has always fascinated me how the British motoring industry fluctuates from making absolutely magnificent cars to churning out overpriced unreliable pieces of junk. For instance, Crème-de-la-Crème Aston Martin was making a DB7 which featured a host of poorly bolted Mazda bits and leather interior stained with glue but has now given the world the brilliant Rapide and DB11. Aston is just one of the many automakers that show how England’s motor industry is moving in phases.

Jensen, a now defunct manufacturer, had its own share of flops as well, including losing Volvo as a client for coachbuilding due to not meeting Swedish quality standards and going through multiple bankruptcies. But that is not to say the Jensen did not have its moments of glory. Founded by coachbuilders Richard and Alan Jensens in 1922, it managed to present some of the most spectacular cars to leave the British Isles. Most notable were the models from 1950s and 60s. We look at the most influential models. Despite their relative rarity, all of these models can be found in Dyler marketplace.

Jensen 541 debuted in 1954 and most definitely wasn’t the first car of company’s own design, but arguably the first Jensen to break new grounds. And, being a Jensen, it did it in style. For starters, all of the gorgeous 541’s body except for the doors was made from fiberglass, a revolutionary material back then. Thanks to that, despite being a comfortable 2+2 GT with automatic gearbox, leather interior and plush carpeting, it tipped the scales at just 1.2 tons. In addition to being lightweight, it was also sculpted by Eric Neale with aerodynamics in mind – sleek body had a driver-controlled grill that could open or close on command, balancing between cooling and aero drag. The result was a respectable Cd of 0.39.

Combine that with a low-revving torquey 4 liter straight-6 and you have yourself the fastest four seater in the world, at least if you’d believe the Autocar magazine. Not known for being purveyors of fake news, their journalist topped a 1957 541R (a slightly reworked version) at 205 km/h. Not only did it go as a sports car, it stopped like one too – courtesy of Dunlop disc brakes in all four corners, which was, again, an extremely unusual proposition at the time.

The final iteration came in 1960 and was dubbed the 541S. Offering even more comfort and safety, it received widened track which increased interior space and handling. There were plans to even fit with a V8 of Chrysler’s design and, in anticipation of a bigger motor and more heat, the car then lost its frontal cooling flap. Sadly, a V8 541 was never offered to the public. 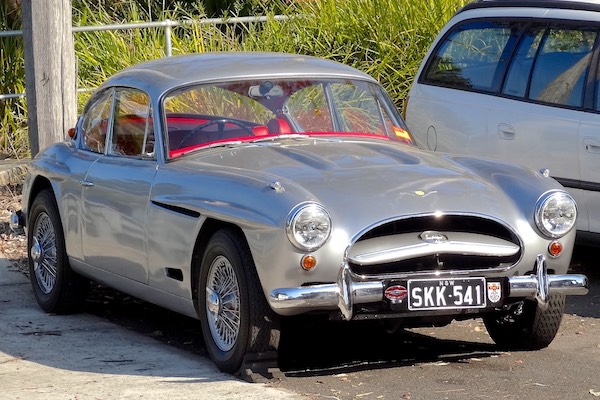 You can see the adjustable cooling flap of 541 in action
© D Mak, Flickr 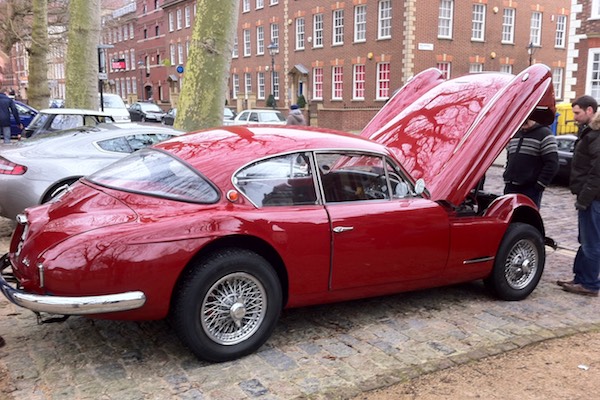 Molded from fiberglass, 541 was quite lightweight for its size
© Richytheanimal, Flickr

As you could guess from the name, the plan to fit a V8 worked out with this 1962 model. Albeit it was also penned by Eric Neale and carried over a large portion of 541s chassis, it hardly looked like any Jensen prior to it. Actually, with its quad headlights it didn’t resemble anything else on the road. Originally, they were supposed to be enclosed to be more streamline, but the idea of covers was ditched to maximize the light emission. Half a century later, C-V8s front end still looks almost controversial.

If Jensen C-V8s looks could be a subject of debate, the performance silenced all of the critics. Powered by a 305 bhp 6 liter Chrysler V8, it was most definitely a supercar at the time. 1963 MkII came with an even beefier 6.3 l motor, once more claiming the Autocar’s fastest four seater in the world title, topping out at 210 km/h.

It was very much built to cross continents at a whim. Proving that, the Autocar remarked C-V8 “holds 110 mph (180 km/h) with complete ease and in deceptively restful silence.”

It seemed then, the C-V8 was among the best cars the money could buy in 1960s, but Jensen restlessly worked on refining it even more. 1963 MkIII was its final version and featured a number of small alterations, including improved ventilation and braking systems. The cars are most easily differentiated by their equally sized headlights. This was also the magnum opus of the Jensen brothers, as they resigned from the company due to their age and managerial differences between them and the board. 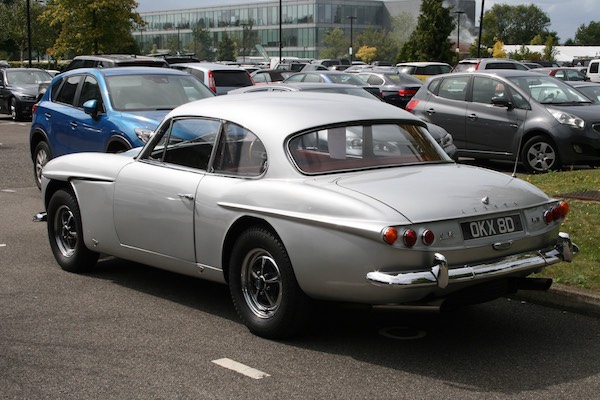 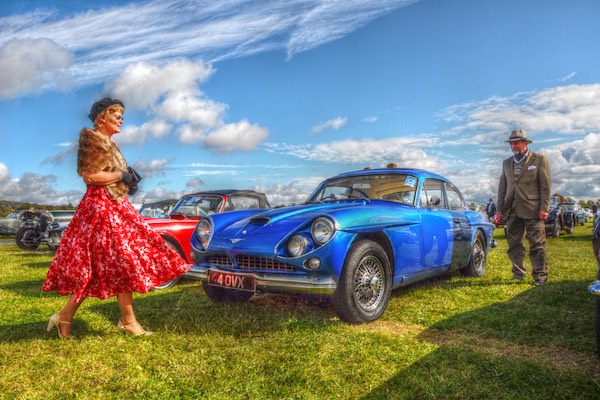 Look at the images of Jensen Interceptor and soon you will remember the familiar car. Popularized by Top Gear it is the most recognized Jensen among all. Whereas the C-V8 look required an acquired taste, Touring-designed interceptor left very few scoffers. While the first Interceptors retained the drivetrain of C-V8s up to 1971, body-wise things were a little different. No longer were the Jensens molded in fiberglass, they were all steel affairs built in Italy by Vignale.

At almost 1.6 tons, Jensen Interceptor was substantially heavier than its predecessor, but they were generously equipped with air conditioning, electric windows and leather clad interiors. In 1971 an enormous 7.2 l V8 was employed to haul everything. And haul it did, in a true Jensen fashion, the Interceptor was brilliant for wide open roads and cross-continental travels. 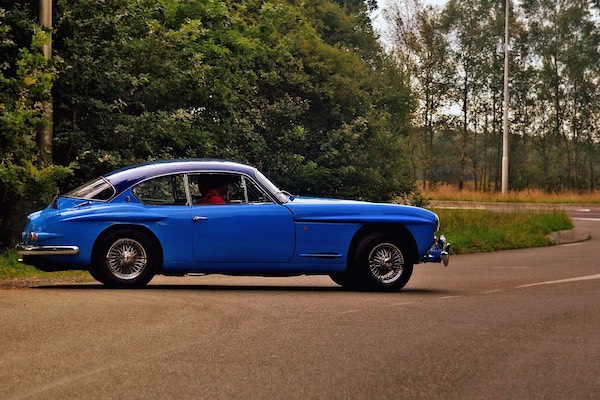 Jensens were at the peak of both style and performance
© Roberto Braam, Flickr 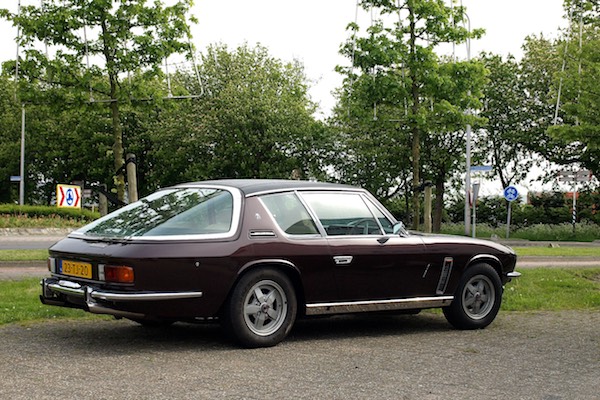 The Interceptor is by far the most recognized Jensen these days
© Martin van Duijn, Flickr

There was the FF version should you encounter some gnarly conditions on these drives. For those unfamiliar, Jensen FF was the first production car to have all wheel drive purely for road use as well as ABS. Hefty and complex nature of the AWD system suited the hefty and complex nature of Interceptor quite well. Unfortunately, the production numbers of FFs were rather low and they were only made in right hand drive. Given the innovation that went into them and rarity of these cars, they are the most sought after variants of the Interceptors. Wonder how much is Jensen Interceptor worth? Today Jensen Interceptor’s price starts at EUR 35,000, but there are some exclusive models that cost EUR 140,000.

The times of post-war optimism and 60s growth came to a halt in 1970s with gas crisis. Needless to say, it was tough to stay afloat then when your business is selling big luxury GTs equipped with a gas-guzzling V8. Jensen went under in 1976 and that was the end of the Interceptor. Or so it seemed. In 1980s, so investors chipped in and brought the Interceptor back, it was a modernized S4 version. During 10 years of production, 6,408 units of Jensen Interceptor were made. 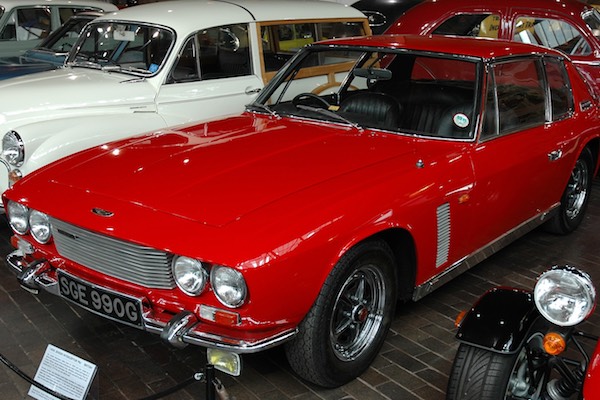 You can get a restomod Interceptor these days. This probably isn’t on
© J&A&HH, Flickr 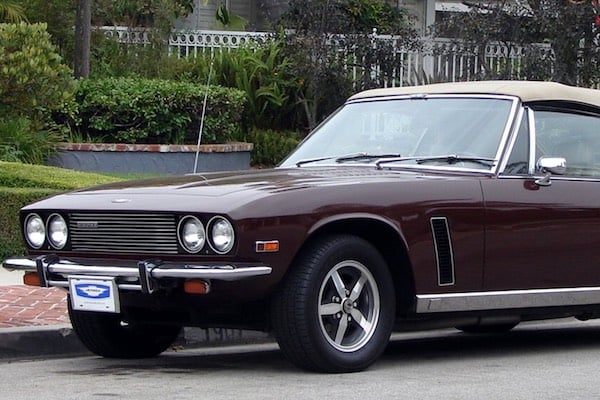 Some Interceptor convertibles were built. But they are now quite rare
© Rick Zolla, Flickr

With Italian styling, massive American V8 and British luxury, it seemed the Interceptors left little to be desired. And yet, it was built by an English company going through financial hardship, which just spells awful quality. Fortunately, there is Jensen International Automotive, a Bandbury UK based outfit which mends all of the issues plaguing old Jensens. Ridiculously complex Chrysler V8s are replaced with much simpler and more efficient modern GM counterparts, at the same time, most common electronic and mechanical gremlins are addressed as well. In the end, you end up with a Jensen that is true to its roots yet functioning on daily basis.

If you’d like to get a piece of the 60s superstar lifestyle, owning is Jensen is definitely a way to go. Just don’t get one that is too far gone. Superstar living comes with an appropriate price tag and any of the aforementioned models will set you back at least EUR 40-50k.