Brits On Wheels: The Roadmap To Your Dream Car

Growing up, we all dreamed big – buying a home, finding fame and driving fast cars are some of the topmost popular when you’re a kid.

As we get older, the realities of adult life can make us push our dreams to the back of our minds, depriving ourselves of the escapism they can provide. Looking to get an insight into what cars Brits dream of driving, we conducted a study to find out just that!

Along with the survey, we’re also introducing our newest tool - the ‘Dream Car Calculator’. With this calculator, you can find out how much and how long it will take to save for some of the ‘hottest wheels’ out there.

Starting off simple, asking the UK about the top choice of colour for a dream car, an overwhelming 30% of you would choose Black, with Blue and Red following in 2nd and 3rd place respectively. Whereas Silver was revealed to be Brits’ least favourite colour. Saloon cars have been elected as the least desired category amongst Brits, with only 9% dreaming of buying a Saloon model. 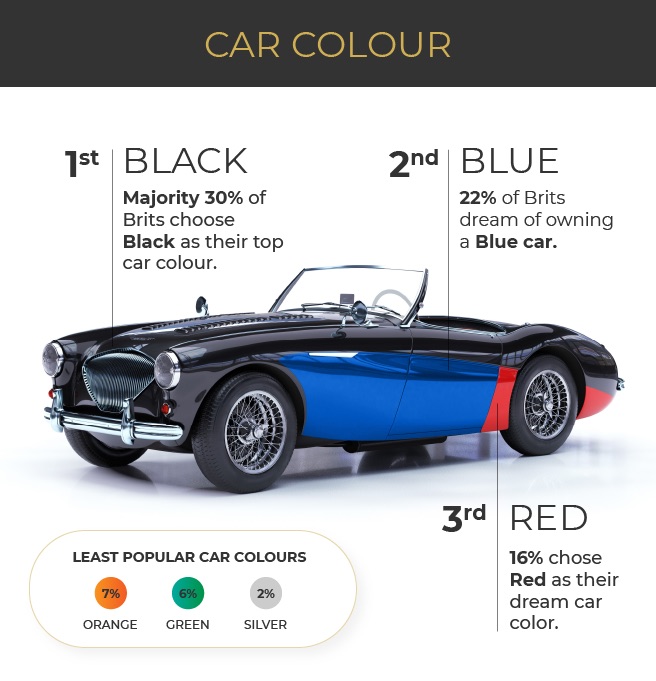 Surprisingly frugal for a dream car, SUV's have secured the top spot as the UK's most desired car body, with a majority 26% of Brits saying they’d love to have one. The multi-terrain friendly styles beat out their flashier rivals Sports Cars which ranked in 2nd place (22%) and Convertibles in 3rd (15%).

The frugality of the British continues to astound, with almost half of the nation (42%) never dreaming of spending above £25,000 for even the most spectacular set of wheels. Only 11% of Brits would dream of ever owning a car that set them back £1 million or more.

Posing the hypothetical question of what they’d be prepared to give up in exchange for their dream car, over a 1/4 of Brits (26%) say they would ditch chocolate first to get their dream car. Alcohol follows as a really close 2nd with 25% of Brits hypothetically giving it up and thirdly 1/5 of Brits (21%) would give up coffee for their dream. Among three of the biggest food & drink vices, it seems the UK is a coffee-loving nation above all!

At the other end, only 5% of Brits would be willing to give up the internet in order to get their dream car, coming in as the least likely sacrifice.

When asked about what factors would influence your decision most when picking a dream car, Design wins 1st place, with ⅓ of Brits choosing their dream car by how it looks first. Even in the hypothetical sense, price has ranked as the 2nd most influential factor (27%) and finally 1/5 of respondents revealed that environmental impact is their top most considered factor when buying their dream car, indicating that the UK is becoming a nation of increasingly eco-conscious drivers.

IF YOU HAD TO PICK A SUPERHERO…

Just for fun, we had made everyone choose their dream fictional ‘super’ car and it looks like Brits are big 80s fans. A majority 22% would choose KITT, the talking car from David Hasselhof’s ‘Knight Rider'. The time-travelling Delorian from ‘Back to the Future’ followed as 2nd top choice (21%) and The Weaseley’s Invisible Ford Anglia comes in as 3rd most popular (17%).

By collecting data spanning the most popular dream motor categories & models, we’ve managed to create a ‘Dream Car’ calculator for you to play with. Taking your location, job industry, salary and disposable income into account, the calculator works out just how long it’ll take for you to save enough funds to drive away in your dream car.

Motor categories featured in the calculator tool include Classic and Vintage, Luxury, Super and Hyper Cars and Electric.