It’s seemed an age since the lights went out at the 2020 Formula 1 season ender at Abu Dhabi, but on March 25th (that’s right, this Sunday!), the lights will go out at the Bahrain Sakhir circuit to mark the start of the F1 2021 season.

Whilst this year’s F1 cars may look similar to last year’s, plenty has changed under the skin with a new set of rules introduced to make the racing closer and create a more level playing field amongst the top teams and the rest of the field.

These all-new regulations include changes to the cars’ floors, the introduction of a revolutionary all-new cost cap of $147.4mn, and a clampdown on parts copying.

Whilst the recent three-day test at Bahrain proved inconclusive, it appears that the new 2021 F1 regulations have seemingly put current world champions Mercedes slightly on the back foot after Lewis Hamilton and Valtteri Bottas both struggled with the all-new Mercedes W12’s reliability and apparently twitchy handling.

Moreover, Hamilton is reportedly unhappy with his one year contract with the team, and after George Russell’s stellar stand-in job for Mercedes at the 2020 Sakhir Grand Prix, Bottas - also in the final year of his contract with Mercedes - will be looking nervously over his shoulder after another mediocre 2020.

The all-new Aston Martin team - who uses Mercedes gearboxes and engines - also appeared to struggle here, with ex-Ferrari man and four-time F1 title winner Sebastian Vettel setting the least amount of laps out of any of the 20 drivers due to reliability gremlins and not being able to get to grips with the steering of its 2021 AMR21 challenger which Vettel described as “different.”

By the end of the test, it appeared that Red Bull Racing with the Honda-powered RB16 - and arguably F1 2021’s strongest driver pairing in Max Verstappen and Sergio Perez - are the favourites going into this weekend’s season opener.

Of course, the intrigue of what 2021 has in store is not restricted to the sharp end of the grid. Carlos Sainz left McLaren to partner Charles Leclerc at the troubled Ferrari who suffered their worst season in 40 years after slipping to sixth in the constructors’ championship in 2020.

Daniel Ricciardo will replace Sainz at McLaren and pair up with Lando Norris to help the Woking-based team improve on its third-place constructors finish in 2020.

There is also the matter of Fernando Alonso returning to F1 with the former-Renault-now-Alpine team (the team with whom he won his 2005 and 2006 championships) after a three year hiatus, and the arrival of three rookies joining the grid.

Mick Schumacher and Nikita Mazepin will join HAAS to form the grid’s only all-rookie driver lineup, whilst Yuki Tsunoda will graduate to Alpha Tauri to partner the 2020 Italian Grand Prix winner Pierre Gasly on the back of an impressive 2020 F2 season.

In this first part of the Dyler F1 season preview, we look at the top five teams of 2021 and make our predictions for the sharp end of the grid and the top of the midfield.

Join us tomorrow for Part 2 of our reason preview where we look at the five other teams battling it out for midfield honours!

F1 2021 Season Preview: Mercedes and Red Bull at the sharp end of the grid with McLaren nipping at their heels. 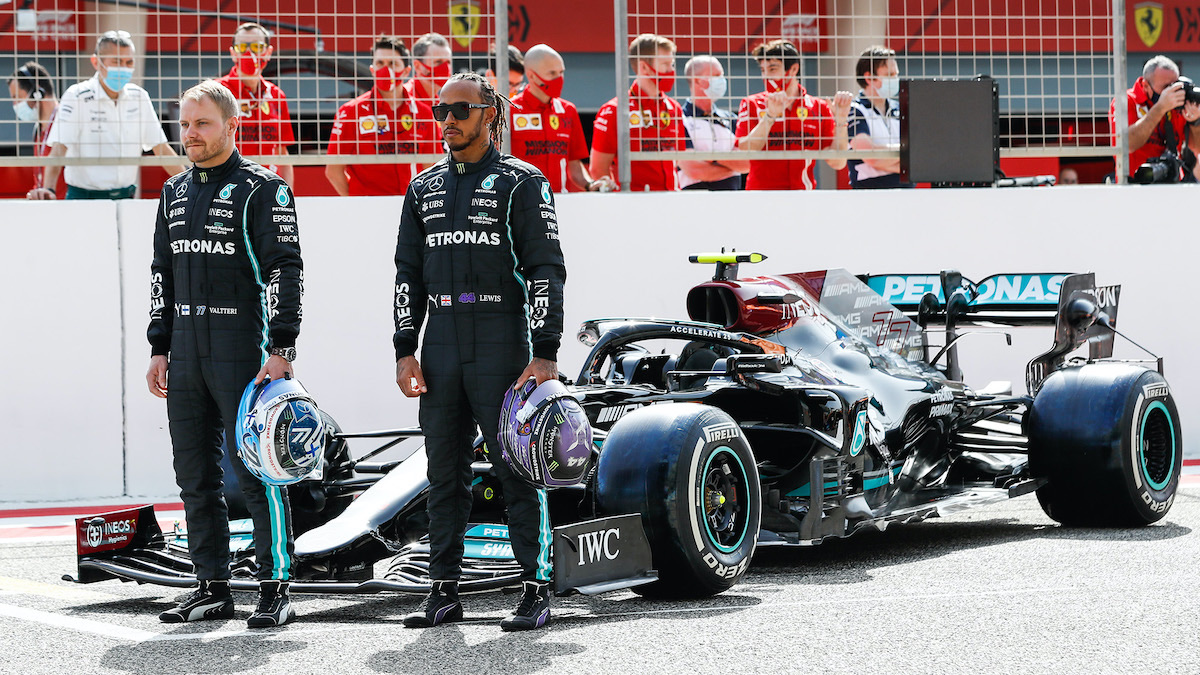 What you need to know: Just like every year since the F1 hybrid era began back in 2014, Mercedes is insisting that they’re going into the 2021 season without the best car. However, it’s difficult to believe them given that the team has won both the F1 drivers’ and constructors’ championships each year since the hybrid era started. However, the recent Bahrain test showed that the team was struggling more than usual. Both drivers bemoaned a lack of rear-end stability on its new W12 challenger (to the extent that Hamilton spun off into the gravel) and a series of reliability problems on the Mercedes power unit and gearbox caused a few headaches for Valtteri Bottas. Whilst the limited running as a result of these issues may set Mercedes back in the opening rounds of the 2021 F1 season, don’t forget they clawed back significant deficits to Ferrari and Sebastian Vettel in 2017 and 2018. Don’t expect Mercedes to struggle all-season long though as Bottas - despite his reliability gremlins - still managed to set the fastest time at the Bahrain pre-season test.

Our prediction: Hamilton will win a record-breaking eighth title, but only just. Despite flashes of brilliance, Bottas will finish fourth behind both Red Bull drivers. The team will lose out to Red Bull in the constructors’ standings. 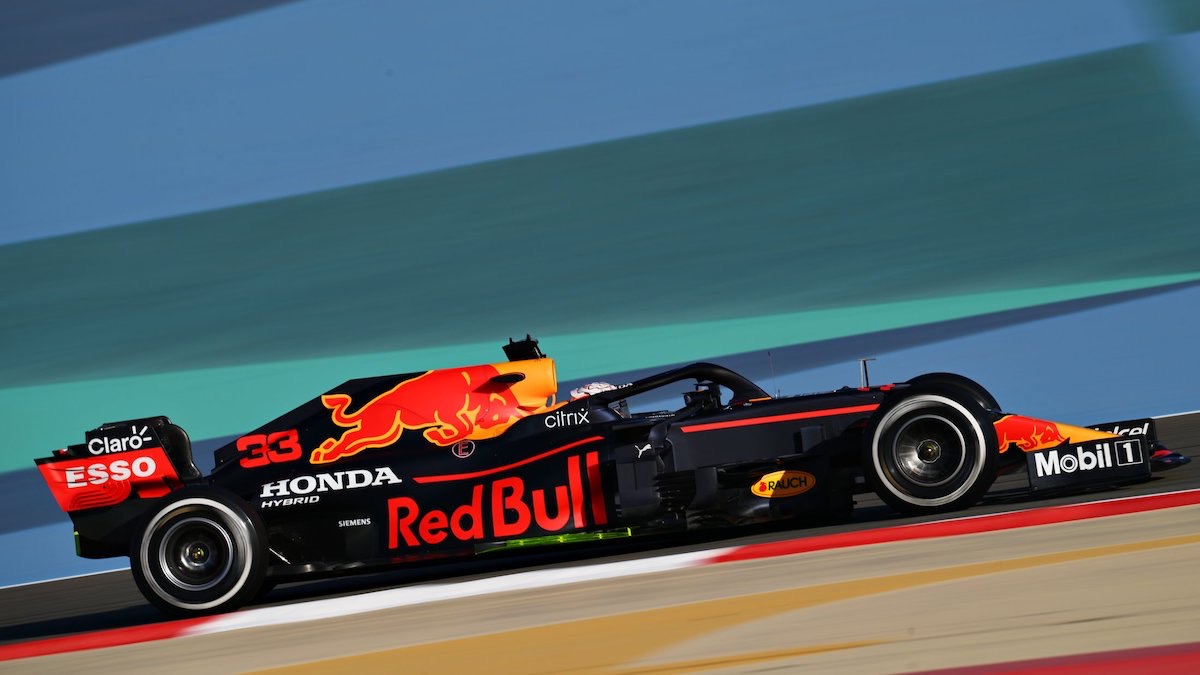 What you need to know: Red Bull heads into the 2021 F1 season with arguably its strongest driver line-up since its championship winning years with Sebastian Vettel and Mark Webber. In fact, some would argue that it has the strongest outright driver pairing on the grid. Max Verstappen’s talent needs no introduction, and he is considered the only man who can take the fight to Lewis Hamilton and Mercedes. Joining him from Racing Point-turned-Aston Martin is Sergio Perez, one of the star performers of 2020, a race winner, and a driver long-noted for outstanding tyre preservation. Perez also joins the team on the back of his best ever season in F1 after finishing fourth overall in the standings last year. According to reports, Red Bull’s 2021 challenger - the RB16B - is much easier to drive than its twitchy predecessor. The Honda engine power unit also ran reliably in testing. Don’t be surprised if Red Bull causes Mercedes some major headaches this F1 season.

Our prediction: Red Bull will win the F1 constructors’ championship thanks to the Verstappen and Perez driver pairing. Both drivers will win multiple races, and finish the championship second and third respectively.

Daniel Ricciardo (left) joins Lando Norris (right) at McLaren to build on the team’s strong 2020 season - will we see the Woking team rejoin the F1 winners’ circle in 2021?
© McLaren

What you need to know: McLaren has plenty of reasons to feel optimistic for the 2021 season. After the dismal Honda years, a switch to Renault power, and the hiring of ex-Porsche Motorsport man Andreas Seidl, McLaren has gradually clawed its way back towards the sharp end of the grid over the last few seasons. In 2020, the team enjoyed its best result for almost 10 years after finishing a well-deserved third in the constructors’ standings after a season-long battle with Racing Point. Despite losing Carlos Sainz to Ferrari, the mood within the Woking-based team is still positive. Daniel Ricciardo - a winner of six F1 races - joins the team from Renault to partner Lando Norris who will start his third season wearing McLaren colours 2021. Over the winter, McLaren also rekindled its relationship with Mercedes, meaning that the power unit in the back of its MCL35m challenger is arguably the best on the grid. With talk of a clever diffuser and a strong showing at the front of the field in pre-season testing from both drivers, there is very little reason to doubt that McLaren will give up third in the constructors’ championship. Expect several podiums and possibly a race win or two.

Our prediction: It’ll be tight between Ricciardo and Norris, but the Australian will finish ahead of the Brit in the standings thanks to having over a decade’s worth of F1 experience under his belt. McLaren will rank third in the constructors’ and the drivers will finish fifth (Ricciardo) and eighth (Norris) respectively.

F1 2021 Season Preview: It’ll be tight between at the top of the midfield with Aston Martin leading the way 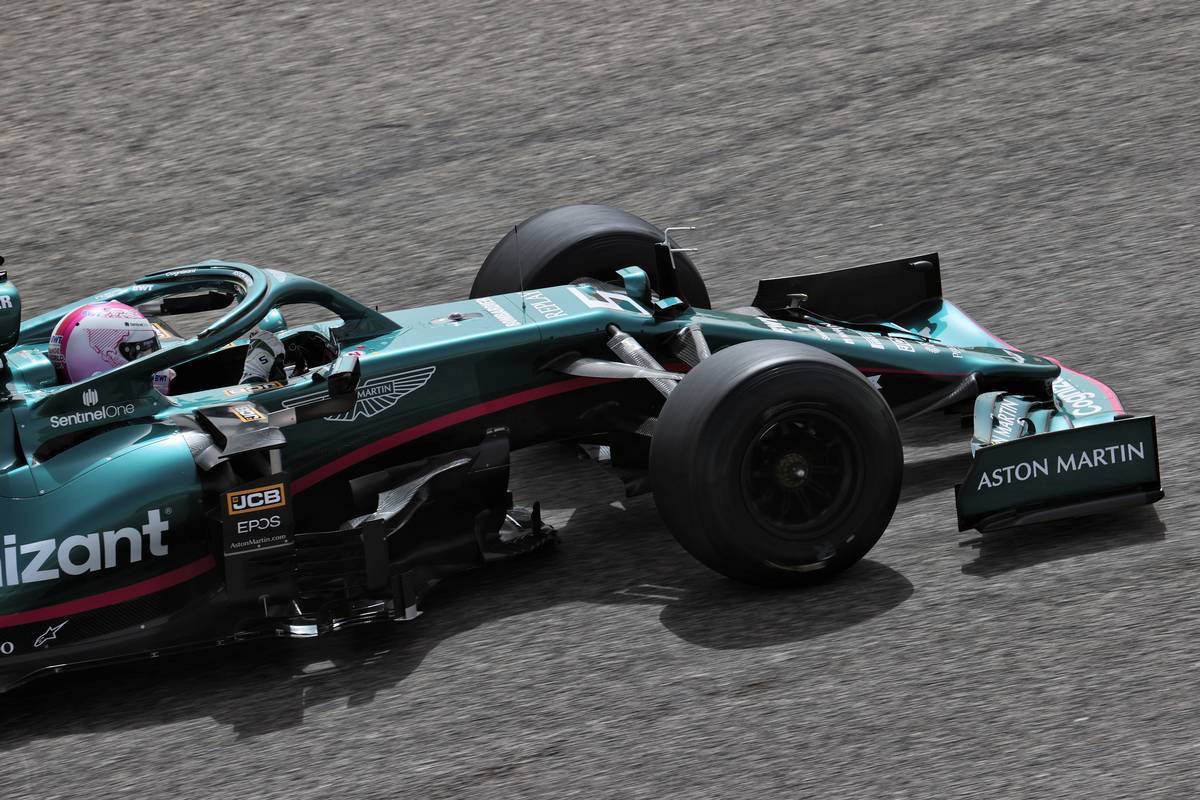 What you need to know: After 60 years, the Aston Martin name is back in F1 and the signing of four-time world champion Sebastian Vettel shows that they’re taking things very seriously. In 2020, the team ran under the Racing Point banner and finished a well-deserved fourth in the constructors’ standings with a car that was extremely similar to the 2019 title-winning Mercedes. In one of the many feel good moments of the 2020 season, the team even won the Sakhir Grand Prix on pure pace thanks to Sergio Perez. Yet over the winter, the team was taken over by Aston Martin, Vettel joins after a bruising 2020 with Ferrari, and Perez has moved to Red Bull. On paper, the team should do well in 2021. Canada’s Lance Stroll keeps his seat, and the car - the Aston Martin AMR21, which remains largely unchanged from its race winning predecessor - has a stable rear end which should be to Vettel’s liking. However, pre-season testing didn’t go too well with Vettel suffering a series of reliability problems. In fact, the German completed just 116 laps - the least of anybody - over the three days of pre-season testing. Despite being blindingly quick on his day and one of the best in varying weather conditions, question marks still surround Stroll’s consistency. If the Canadian can avoid his yo-yoing form of 2020, and Aston Martin can coax out the Vettel of old who won four consecutive drivers’ titles from 2010 to 2013, expect the team in green to give McLaren a serious headache in the battle for third in the constructors’ championship.

Our prediction: Vettel will discover the old magic and thrive amidst the “let’s go racing” mentality of the Aston Martin team, which is a far cry from the political environment at Ferrari. He’ll finish sixth in the standings and may even nick a win. Stroll once again will improve on his 2020 performance. However, he’ll struggle to match Vettel over a full season and end the season 10th. 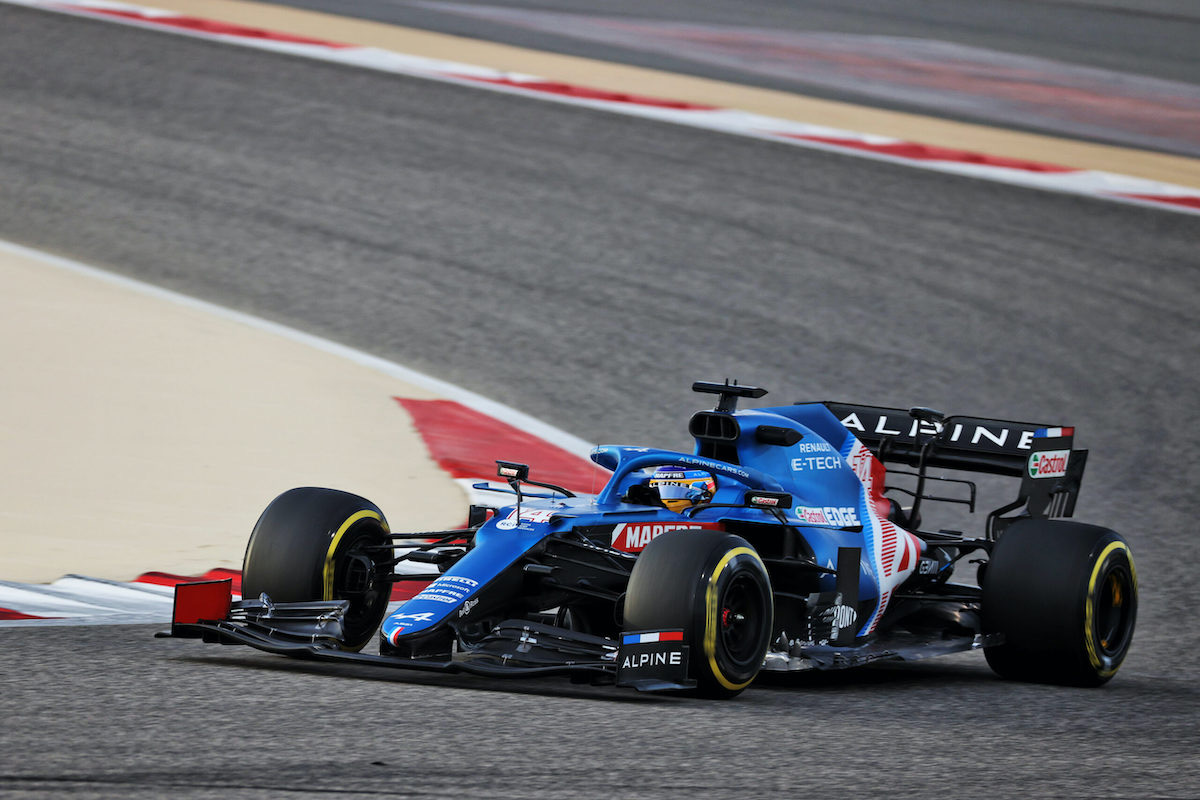 What you need to know: It’s all change for the Enstone team in 2021. Firstly, the team has lured two-time F1 title winner Fernando Alonso back to the sport after a three year hiatus. Secondly, the team has rebranded as Alpine; Renault’s performance sub-brand. In the pre-season test, the striking blue car with its massive airbox ran without major drama, and the times Alonso and team-mate Esteban Ocon proved to be consistently towards the top of the midfield. Despite being away for three years, expect Alonso to be his brilliant best and consistently be within striking distance of a good result should the teams ahead trip up. After all, its A521 challenger is an evolution of last year’s Renault RS20, which scored two podiums in the very capable hands of Daniel Ricciardo. After a fairly anonymous 2020 against Ricciardo, Ocon will be expected to raise his game in 2021. Given Alonso’s decades of F1 experience and notorious pace, it will be a mighty feat if the Frenchman can get close to one of the greatest drivers in the history of the sport.

Our prediction: Alonso will be seventh in the standings, with Ocon 11th. Alpine will end the season fifth, which is where they finished last season.

What do you think about Part 1 of our F1 2021 preview? Accurate, massively wrong, or somewhere in between? Let us know by getting in touch with us via our Facebook or Instagram pages!

As we promised, Part 2 of our F1 2021 will be ready for you to read tomorrow. In the meantime, if you’re interested in owning your very own piece of motorsport history click here to take a look at the race cars listed on Dyler.com.