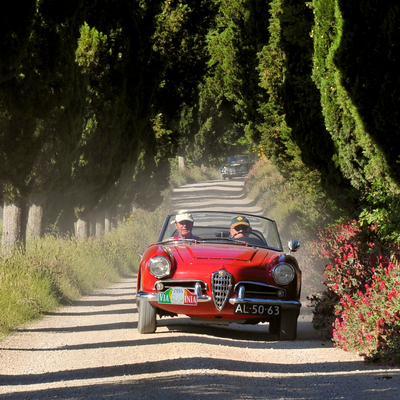 Via Flaminia - Borghi & Palazzi on the Mille Miglia road

We had such a demand for the rally in May that we found ourselves compelled to organise another event in 2020. Marco Brocken and Kitty Kamerbeek, many time participants had already indicated to be willing to organise a rally under the Via Flaminia umbrella. They will be starting with the September Via Flaminia Classic, largely a copy of the May edition.

The 16th edition of the Via Flaminia has the subtitle “Borghi e Palazzi” or “villages and palaces”. We will be staying in restructured villages and palaces, which is a word used widely in Italy and refers to large (family) mansions.

The rally starts at a Villa Scacciapensieri in the commune of Siena at a short distance from the Firenze Airport. We will be bringing your classic car to the airport and you should be in time at the hotel to indulge at the pool.

The next day, on Sunday, we will be crossing the Apennines to the east. A very nice drive, leaving Tuscany and taking the smaller roads gently climbing into oblivion, leaving civilisation behind us, replacing traffic for cows and old Fiat 500’s.

Our destination is a picture-book perfect walled village, which has been converted to accommodate guests. How come I haven’t found this gem before? For two nights we take much of this hill-perched village for ourselves and will be discovering the surrounding Marche region on the next day. Ranges of lush hills with the Adriatic as backdrop are the setting for our trip.

From the Marche we drive back over the Apennines into Umbria and we come to a marvel, which even surpasses the previous village. This fortified village is often used for weddings. It is well rebuilt to modern standards and even has a swimming pool. The next morning we will have a short drive leaving the option to you to either indulge at the pool or discover Orvieto at a few kilometres from our village.

After two nights in Umbria we drive east towards our beloved Abruzzo. We stay in the absolutely fabulous village of Santo Stefano. It has been restructured to high standards while leaving the authentic aspect.

The next day we drive up the Gran Sasso planes, a region, which was famous for the quality of wool provided by its sheep and part of the state of Florence. This is also why the villages were relatively rich. Personally I must have drive there over 50 times, each time the light and vegetation is different, it keeps on fascinating me.

The last hotel is a wonderful medieval castle on the hills overlooking Rome. It is set i a dominant position overlooking he lush countryside of the Sabina area.

The next morning it is only a small drive to the Airport of Fiumicino where we will pick up your car.

As always, the Via Flaminia is a layback rally where the competition serves the atmosphere, winning is not a goal on itself. Those who want to have a stop for a coffee can do so. No time constraint. The classification is done via navigation and the competition for the last place is sometimes fierce. Unless the May edition of the Via Flaminia there is no Sport-class.