90 Years ago: Opel Sounds in the Era of Rockets

10 o’clock in the morning on May 23, 1928: A futuristic racing car with lateral wings storms along the Avus in Berlin while hissing sharply. 29-year-old Fritz von Opel, a grandson of company founder Adam Opel, had successively fired the 24 solid fuel rockets in the rear of his RAK 2 and shot past the packed stands with a fire trail in his wake.

The 3,000 spectators go crazy when the glossy black car with the Opel writing comes to a standstill: “Rocket Fritz” from Rüsselsheim has just set a new course speed record with 238 km/h. On top of that he has just proved to the general public that rocket propulsion is powerful and controllable. Opel sounds in the era of rockets in front of film cameras – and lays the foundations for manned space flight. 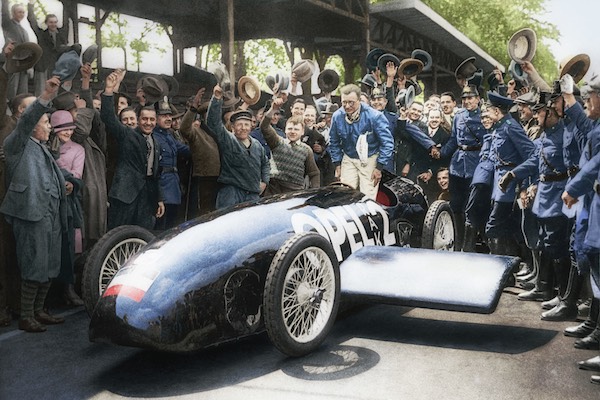 Opel reworked the original black and white photograph from 1928: Fritz von Opel is celebrated after his wild ride in the RAK 2
©Opel archive 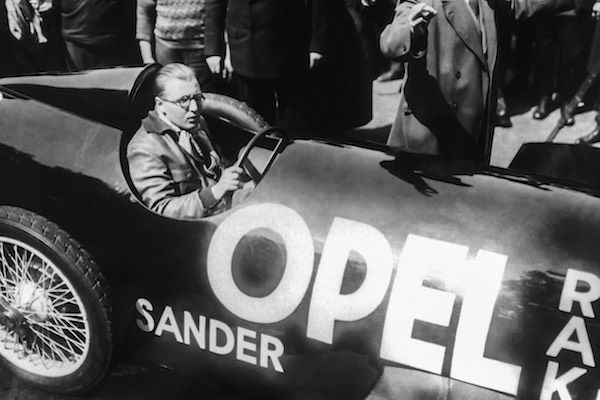 Don’t try this at home: Fritz von Opel did not wear a helmet for his record-breaking run in the RAK 2
©Opel archive

The history of the Opel RAK 2 dates back to the autumn of 1927. Fritz von Opel decides to get actively involved in the rocket research project of publicist and astronomer Max Valier (1895-1930) after meeting the Austrian. The racing driver, entrepreneur and the qualified engineer brings his own commitment along with the innovative and financial strength of Opel to the table.

On the one hand, because he is personally fascinated by rocket technology and on the other, because he hopes that the visionary plan will have a positive impact on the Opel brand. Opel asks Friedrich Sander (1885-1938) to join the project for a fast implementation of the rocket motor as Sander’s company makes solid fuel signal rockets. 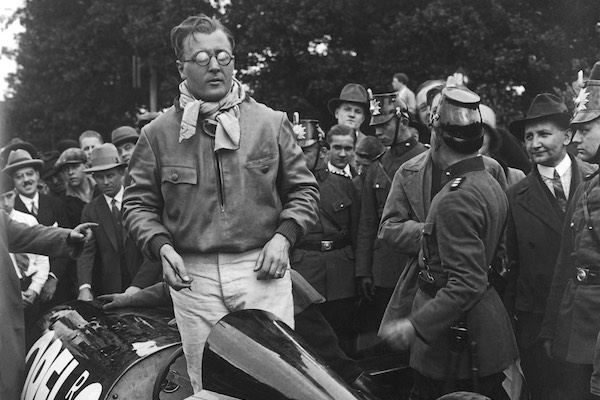 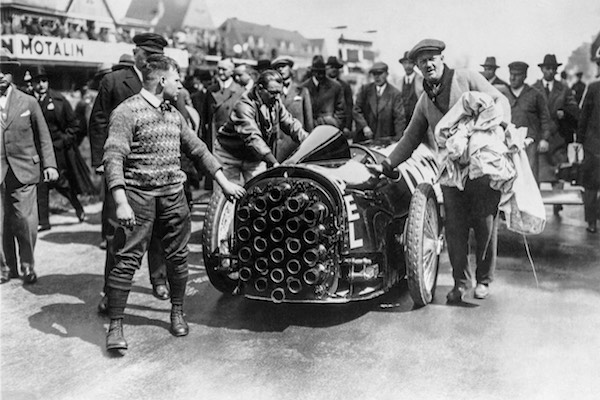 Moments to go: The Opel team pushes the RAK 2 to its starting position
©Opel archive

The cooperation between Valier, Sander and von Opel started to bear fruits as early as March 1928. The first rocket-propelled prototypes are launched on the Opel test track in Rüsselsheim – obviously behind closed doors. On April 11, the Opel RAK 1 with Opel engineer and racing driver Kurt Volkhart behind the wheel reaches 100 km/h within eight seconds.

The vehicle, which already has small lateral wings, is based on an Opel 4/12. It is propelled by twelve Sander rockets with around 40 kilogrammes of explosives. The proof of the usability of rockets is done. The team agrees that tests with higher speeds should be conducted, not least based on the overwhelming response in the press. As the test track in Rüsselsheim is not suitable for such tests, the team choses the Avus in Berlin – it has two long straights. 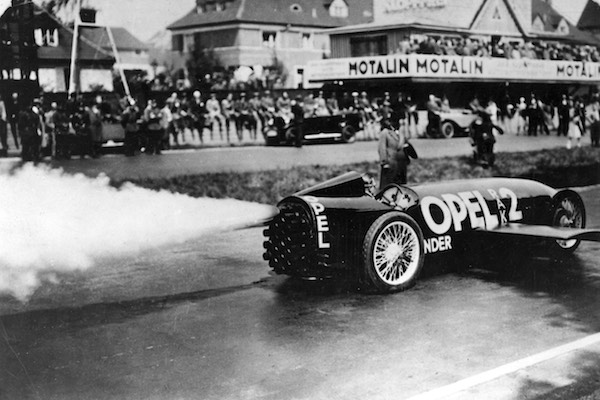 And he’s off: Fritz von Opel ignites the first rocket in the rear of the RAK 2 via a pedal
©Opel archive 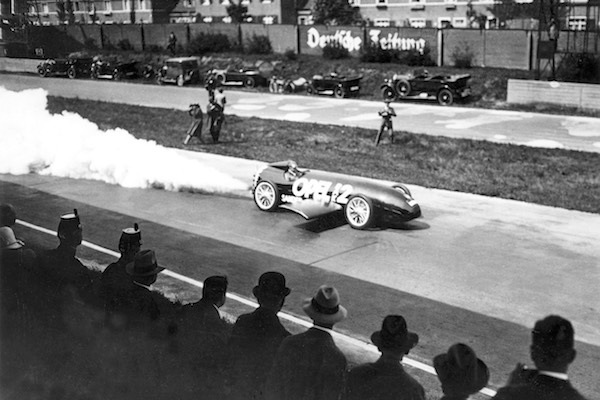 Spectacular: The RAK 2 races past the stands of the Avus trailing a white plume of smoke
©Opel archive

The Opel RAK 2 is especially designed for the record-breaking attempt on the Avus. It is based on the chassis of an Opel 10/40 and is an enhancement of the RAK 1 in many areas. It is longer than its predecessor with a length of 4.88 metres, the aerodynamics have been fine-tuned, the lateral wings are larger and it has 24 solid fuel rockets that develop six tonnes of thrust. Elsewhere, the sequential electric ignition of the charges via a pedal in the footwell was maintained. The 560 kg futuristic-looking race car neither had an engine nor a transmission.

Fritz von Opel names himself as the pilot – and he plans his record-breaking show in Berlin meticulously both from a technical as from an organisational perspective. Around 3,000 people including journalists, celebrities, athletes and politicians are invited. And the guests flocked to the event. Film stars Lilian Harvey and Thea von Harbou, Metropolis director Fritz Lang, popular racing drivers Hanni Köhler and Carl Jörns along with boxing legend Max Schmeling were all in attendance.

Prior to the start Professor Johann Schütte, Chairman of the Scientific Society of Aviation, and Fritz von Opel held prophetic speeches. Then the Opel team gets ready. Mechanics August Becker and Karl Treber take the tarpaulin off the Opel RAK 2 and carefully push it to the start. Only then are the rockets installed and connected to the ignition mechanism. Police clear the track and Fritz von Opel gets behind the large wooden steering wheel. A handshake pregnant with meaning with Friedrich Sander follows. The excited spectators suddenly fall silent. Then everything happens really fast. 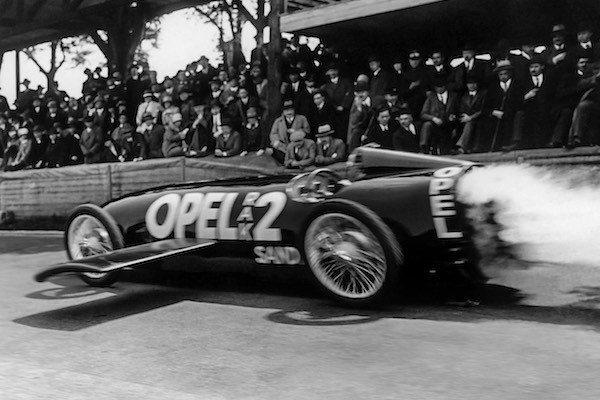 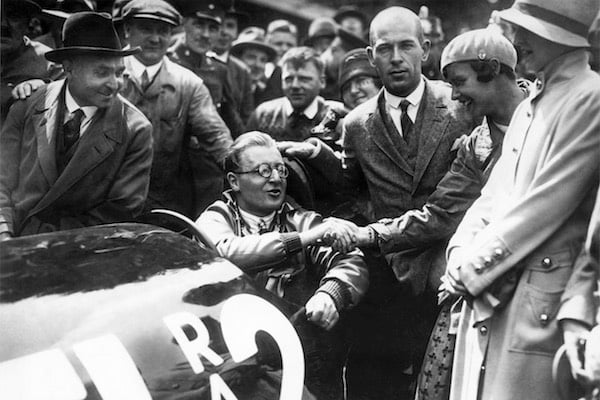 “I step on the ignition pedal and the rockets roar behind me, throwing me forward. … I step on the pedal again, then again and – it grips me like a rage – a fourth time. To my sides, everything disappears. ... The acceleration gives me a rush. I stop thinking. I’m acting on instinct alone, with uncontrollable forces raging behind me,” said “Rocket Fritz” when looking back.

The Rüsselsheim-born entrepreneur masters the Nordkurve and successfully prevents the car from taking off – the wings do not deliver enough downforce for the breakneck speed. Everything is over after just three minutes. The RAK 2 slowly taxis to a standstill, the large white plume of smokes disappear into the Berlin sky and are replace by the thunderous applause from the spectators. A utopia has become reality and results in a spectacular triumph. Von Opel reaches a speed of 238 km/h becomes a household name in Germany overnight. The Opel brand is immediately recognized at the more progressive and innovative car. The era of rockets has begun.

Spurred by their success in Berlin, Fritz von Opel and Friedrich Sander continue their experiments. On June 23, 1928, they set a new record for rail vehicles when they reach 256 km/h with the Opel RAK 3 rocket handcar. After also conducted tests with a motorbike, the legendary Opel Motoclub, they turn their attention to aviation. 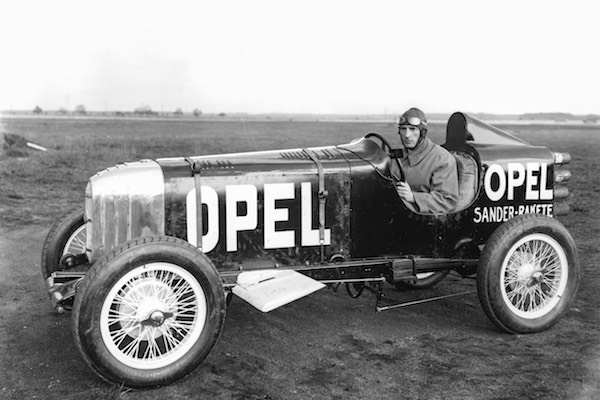 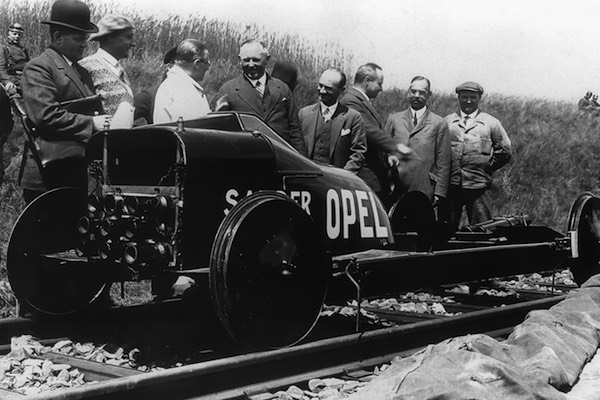 And on September 30, 1929, they are responsible for yet another pioneering feat – the first ever public rocket-powered flight in the Opel-Sander RAK 1 high wing aircraft built by Julius Hatry. Shortly after this, the Opel rocket experiments were brought to an end by the Great Depression and the company focused its development capacities on vehicle development. 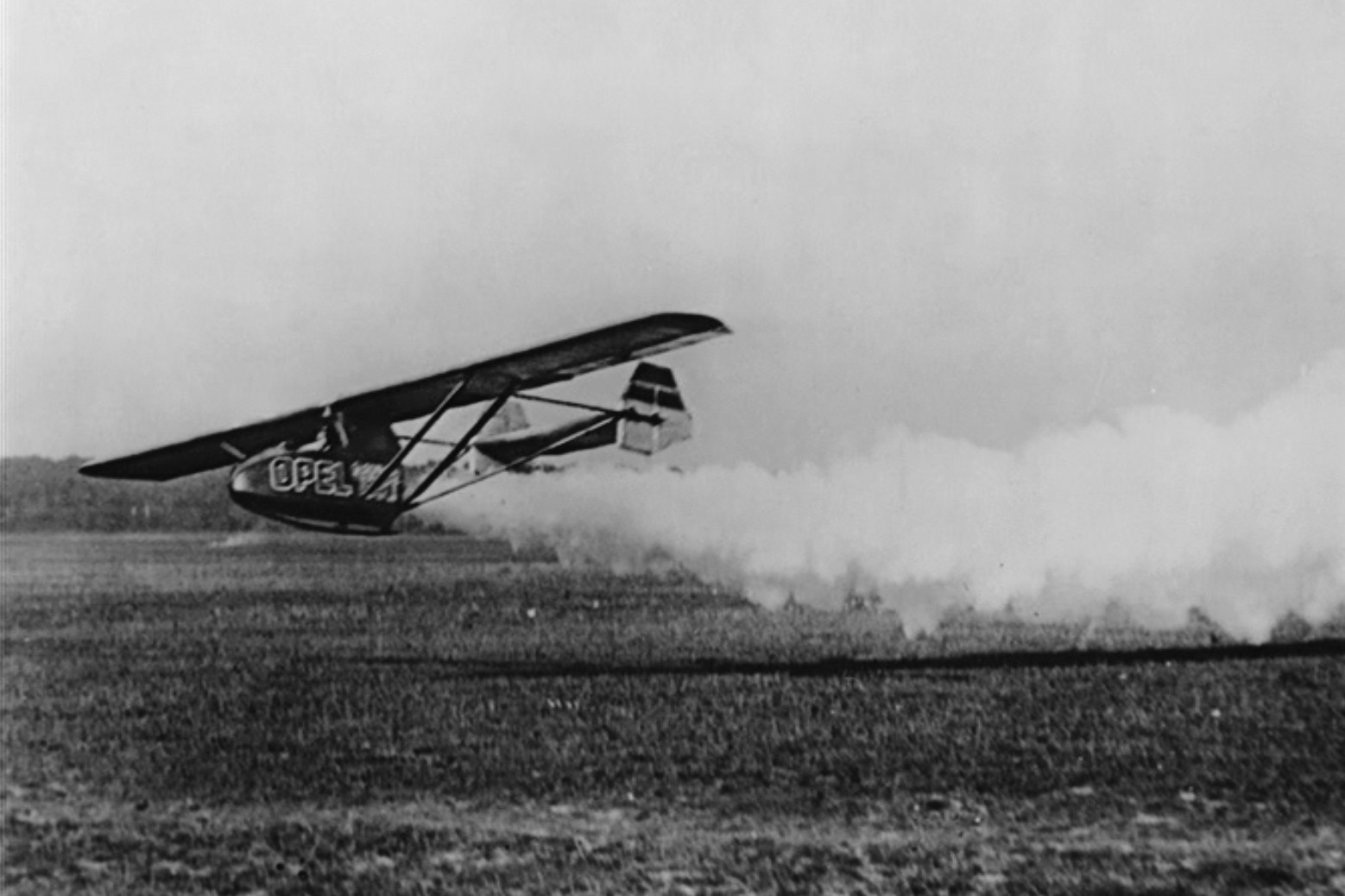 First ever rocket-powered flight in the world: Fritz von Opel takes off from the airport in Frankfurt Rebstock in the Opel-Sander RAK 1 in the autumn of 1929
©Opel archive 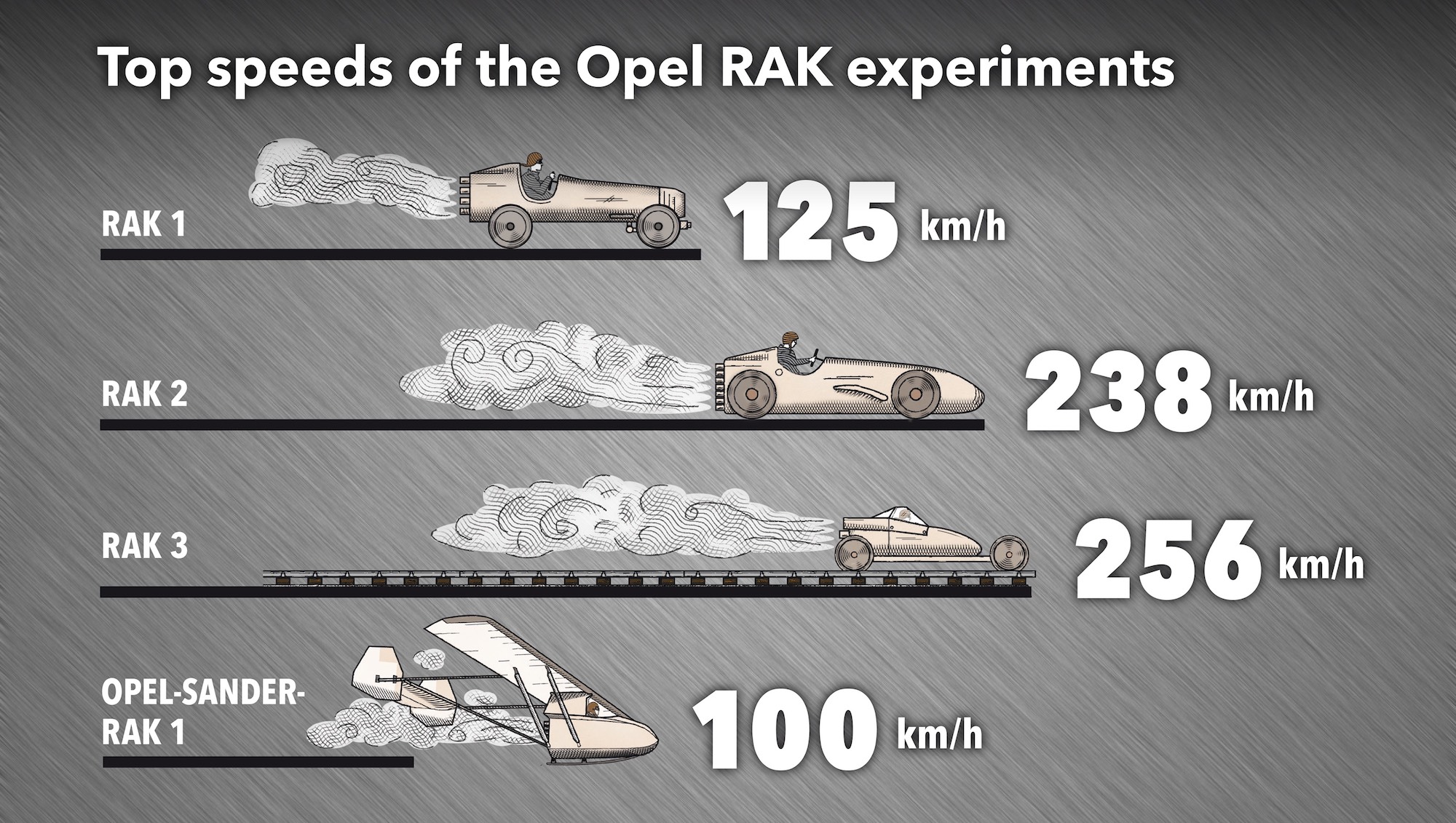 On rail, on the road and in the air: The top speeds of the Opel RAK experiments
©Opel archive