Mauritania - Final Destination for Most of the Mercedes W201's

Classic Mercedes-Benz's are commonly associated not only with luxury but also with being extremely tough. In some places they are like the German Toyota. One such place is Mauritania - a country which lies in the north-west of Africa. It's unique in that two thirds of it is covered by sand and that it is home for most of the 1.87 million Mercedes w201's produced. Or at least it seems that way.

Even though import of the old mercs is decreasing, it would be very difficult to find another country that is as densely filled with the silver star badged cars as this one. Of course if you look closely you might find other means of transport here: Toyota Land Cruisers , Mercedes-Benz W124's (did not see a single W123), French creations from the 1980s and mule pulled carriages. All these vehicles excluding the mules are commonly considered unbeatable. Maybe at some point they will be replaced with the ever-growing Japanese cars from the 2000’s.

When we got in our 1980s Mercedes 190D cushy seats and turned the key it seemed that the engine is just getting ran in. It started and idled like in the car ad descriptions. All was well besides it: silent bump collecting ride, small traces of rust on the rear wheel arches and a few unsmooth driving results at the front. 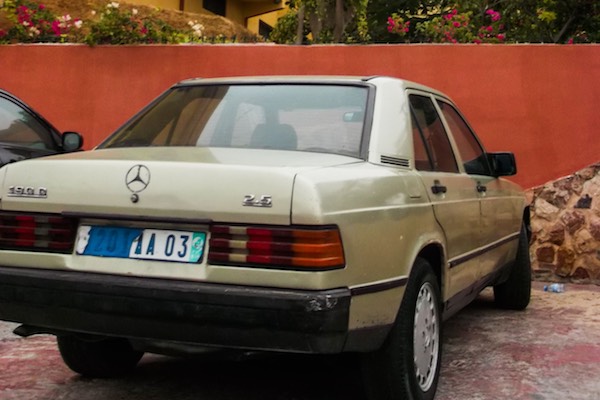 The 190D that helped us getting around the city
© AutoAgitator 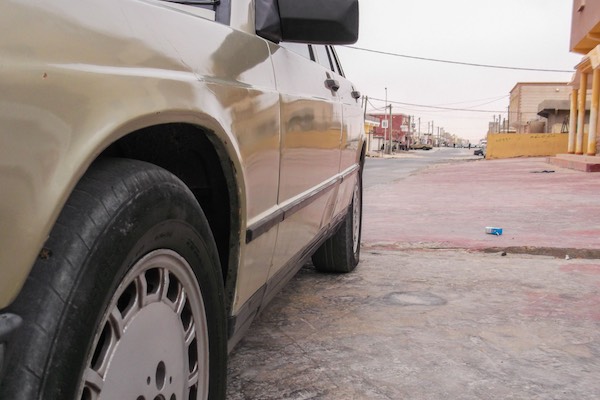 Tires with tread are a luxury
© AutoAgitator

If this country had a spine it would be Nuadibu. It is its most important fishing capital settled in a 60km long appendix like White Cape. I guess here the anatomic comparisons can end and the look around the city can begin. 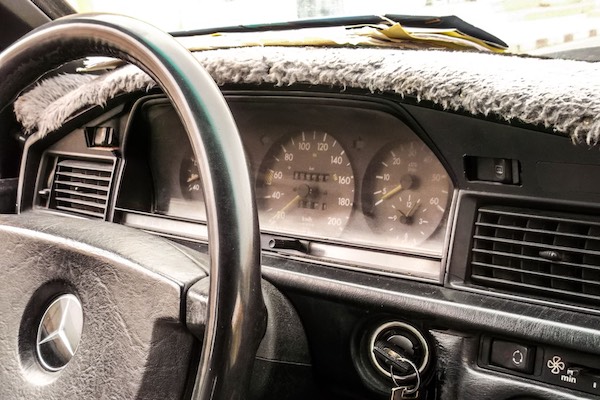 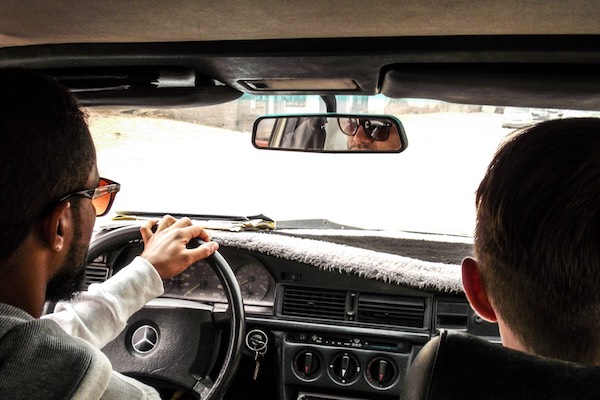 A boat-like suspension of our 190D
© AutoAgitator

Nuadibu color scheme is dominated by dull gray-yellow shades, which require some adaptation from the European eyes. Near the unfinished/abandoned buildings a luxurious villa can be found. It is a similar story with the cars: sometimes in a crowd of beat-up survivors a classic in showroom condition appears. 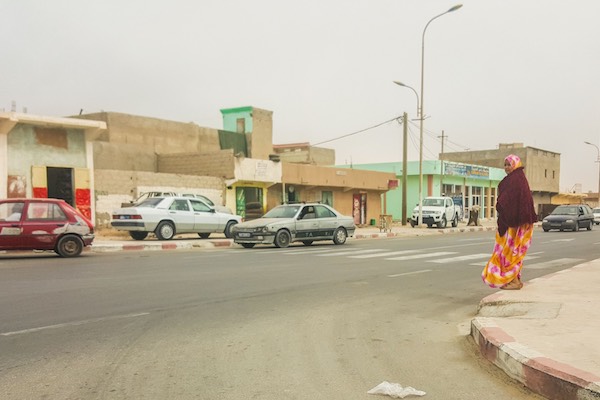 Typical view of the city. Notice the patched up Peugeot's and a neat W201
© AutoAgitator 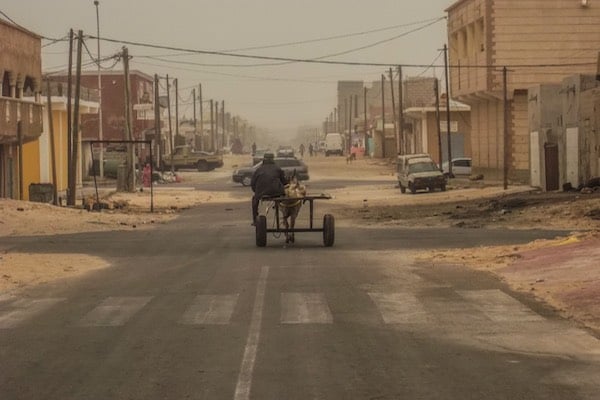 Mule pulled carriages are quite common as well
© AutoAgitator

Driving in Nuadibu on the surprisingly good quality paved roads has its similarities with driving in Sicily. Horn must be used a lot to announce one's participation in traffic. Failing to do so might get you involved in an accident, which happen quite frequently here. The big number of accidents might also relate to how the driving exam is carried out. Many participants pass it without a vehicle. Introducing a sufficient amount of money to the instructor usually does the job. This 'exam' can be held by anyone with 17 years of age. 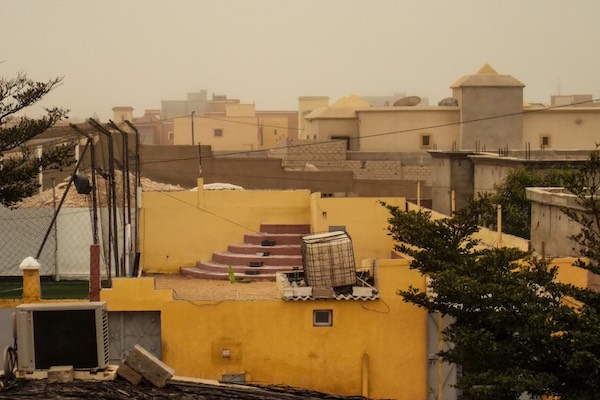 A skyline of yellow and grey
© AutoAgitator

Meanwhile we were trying to reach the famous fish market without any new 'unsmooth' driving marks. By carefully limiting the power produced by our five-cylinder diesel engine we made it and it was difficult not to notice the unique car park at the gate. Bodywork rusted so bad that one can see through it and windshields faded so much that one cannot see through them anymore. Of course that is no surprise, these vehicles are vital tools and some of them are serving for more than six decades. Luxuries like an interior or headlights are not a necessity therefore not all cars have them. The local mechanics probably use similar methods to keep these machines running as the Cubans. 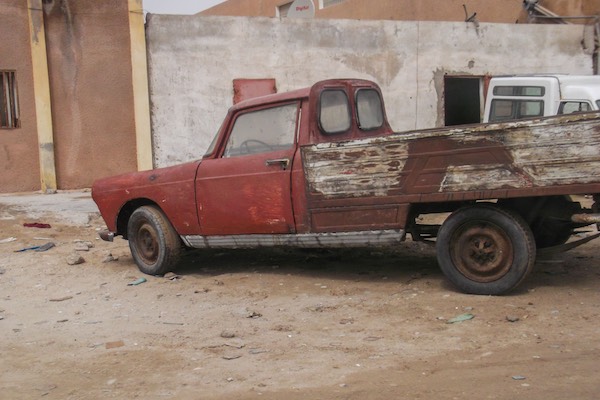 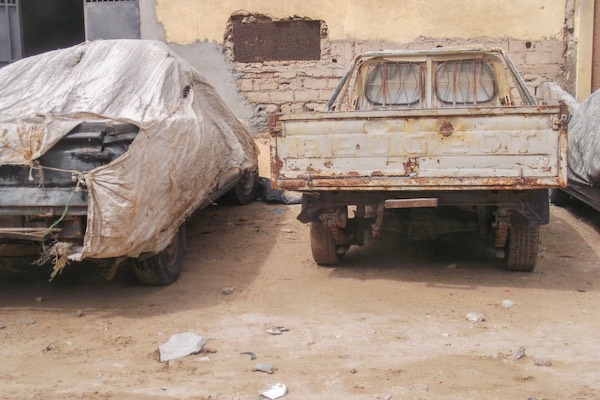 We parked our Mercedes next to these survivors and headed inside. I do not even want to try to explain the gruesomeness of the smell that was protecting the entrance, but we made it through. Although it was not allowed to take pictures it was difficult to see why. A shore with an infinite number of fishing boats and a hangar where pallets with fish were stacked. After an unsuccessful search for some more exotic looking fish we went out and started driving towards the beach. The road was winding through ghostly neighbourhoods and later vast planes of sand and rock. Spirit of the Sahara desert could be felt. The difference being that these planes are subjected to tides which leave a blanket of waste. A good reminder to recycle. Following our improvised road we arrived at the beach. Although we were determined to have a swim, a sudden wind rise sandblasting our tan changed that. It seemed more fun just to cover every patch of skin instead. 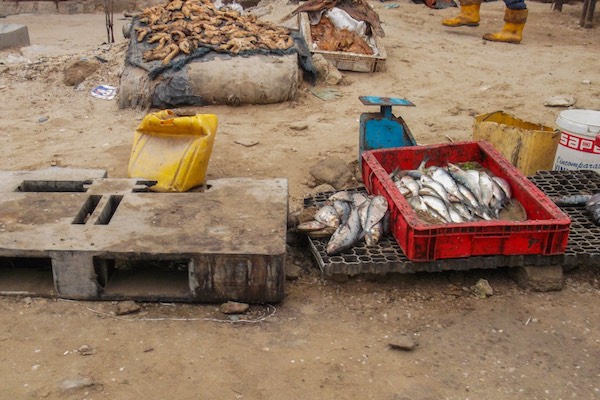 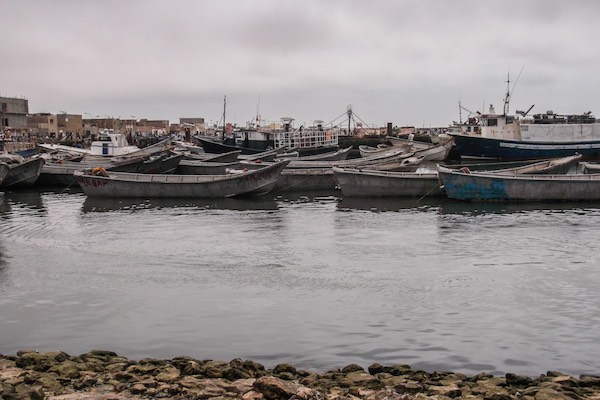 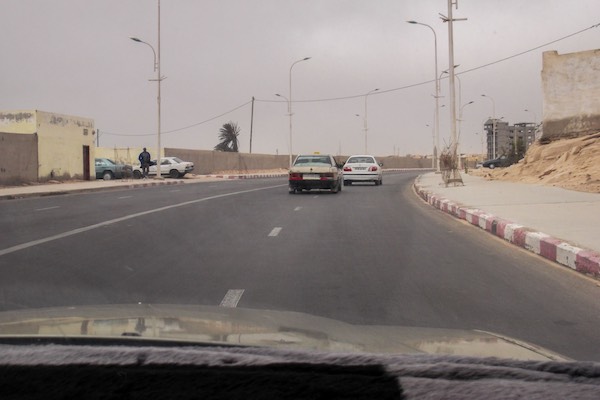 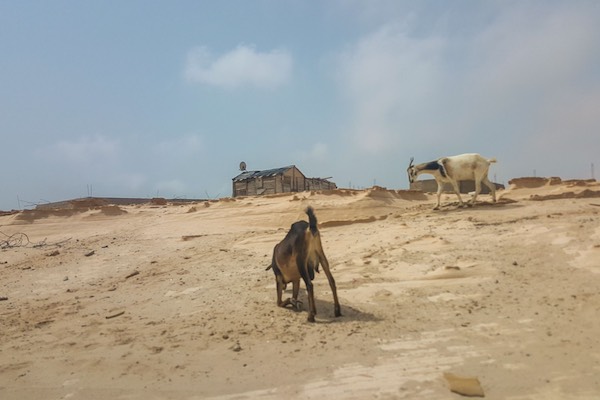 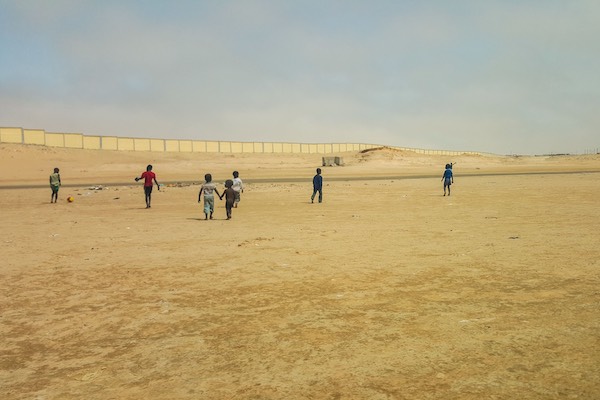 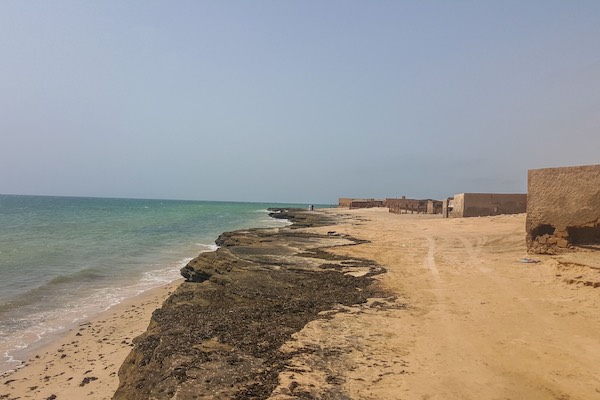 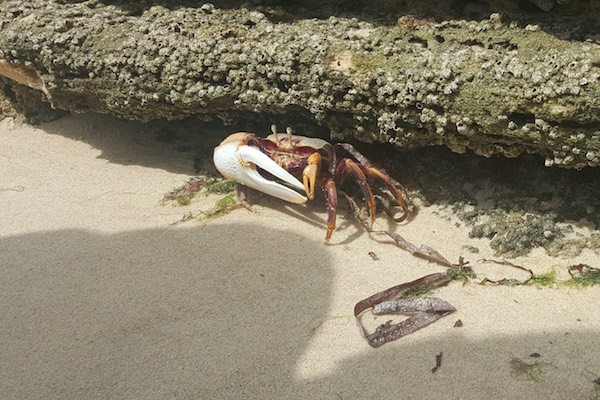 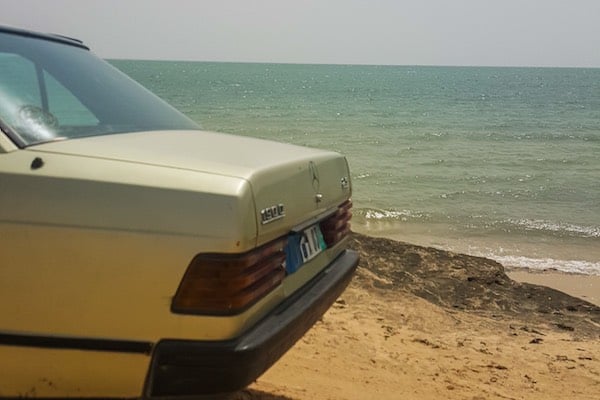 On our way back darkness started to set in. It was nice to see that those who do not have headlights stay off the main roads, unfortunately those who do - use them as much as they can. High beam and fog light combinations on a clear night are a common sight. A blinding end to what was an eye-opening visit. 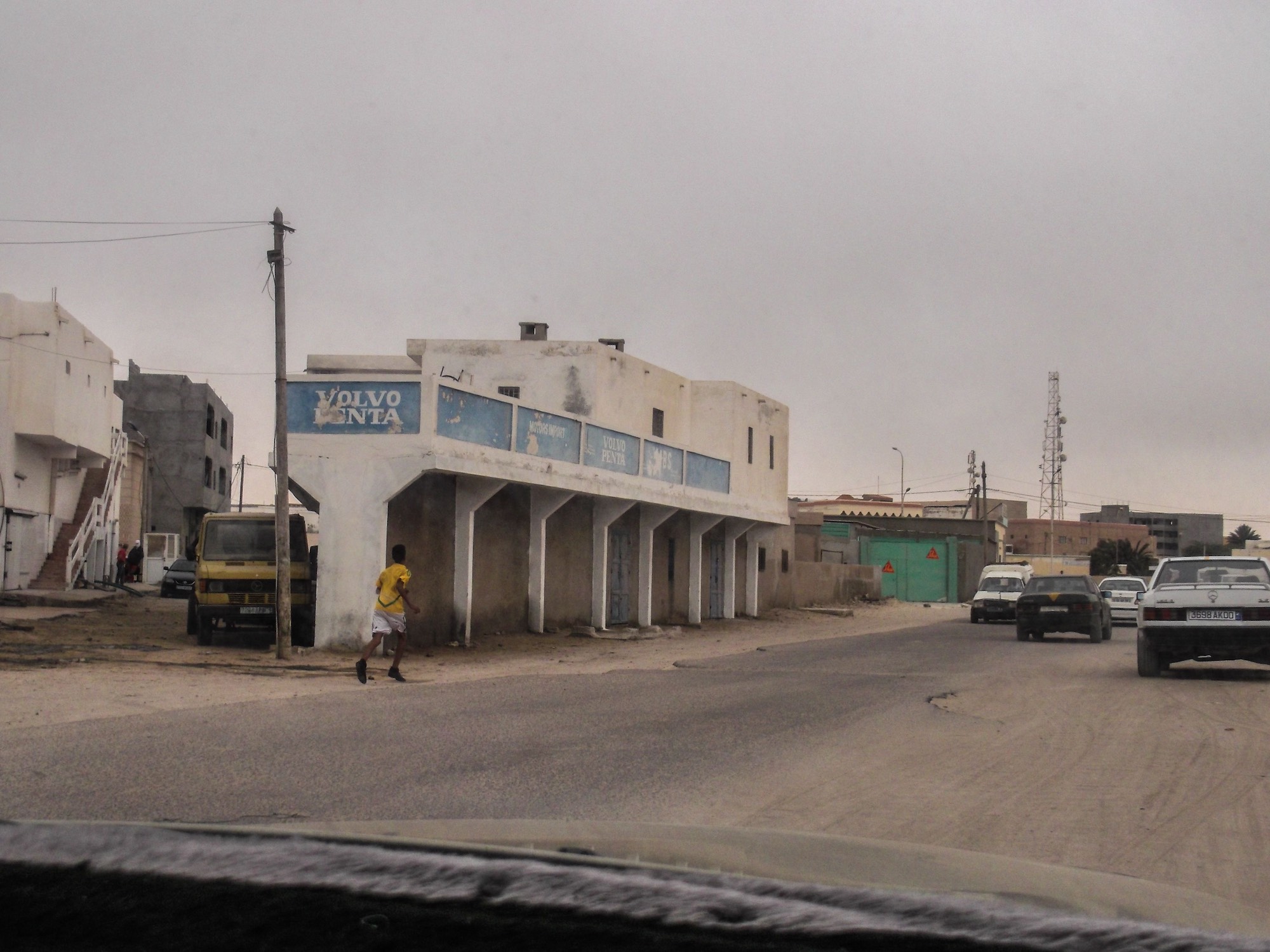