The automotive industry is inexorably moving in the direction of electrification. For many, this technology seems like a breath-taking innovation, capable of reducing emissions drastically and thus significantly contributing to a decrease in pollution.

Yet if we take a look at the textbooks of automotive history, we can see that electric cars were not invented yesterday. In fact, the first electric vehicle began cruising the streets of our planet in 1832. Given, this was not a car, but rather – a carriage with an electric motor, but it was the first step towards eco-friendly modes of transportation.

In fact, the first hybrid car was constructed in 1901 by Ferdinand Porsche – yes, ladies and gentlemen, it was 116 years ago that the first automobile driven by both petrol and electric motors saw the light of day.

Attempts to perfect the hybrid powertrain were numerous. Many automobile manufacturers have experimented with this attractive powertrain. Including Audi, which we could easily call the pioneer of European hybrid cars.

Back in 1989, this member of the Volkswagen Group introduced a hybrid based on the Audi 100 Avant at the Frankfurt Motor Show; this concept was supposed to solve the problems that were only giving engineers headaches at the time. 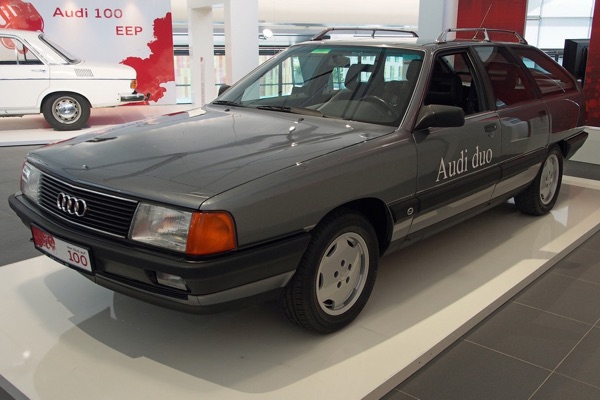 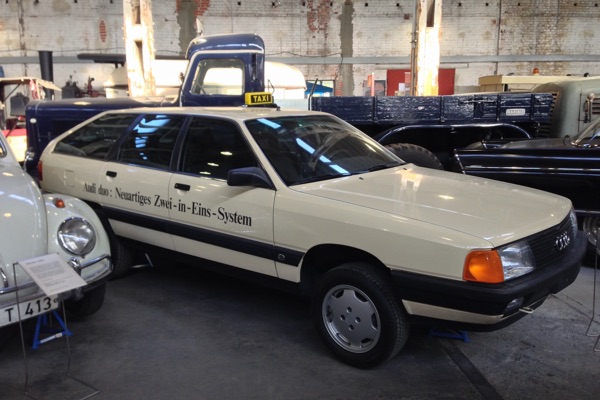 Instead of the traditional four-wheel drive system, the Germans chose a different route that is now used in all vehicles that have hybrid powertrains: they took a regular front-wheel-drive Audi 100 wagon and put a 9.3 kW electric motor on the rear axle.

This was linked with a 2.3-litre, 5-cylinder petrol engine that could generate 136 PS. While the conventional internal combustion engine drove the front wheels, the battery-powered motor drove the rear wheels. This configuration is widely used in modern cars, but this system was a bit more interesting because one of two modes could be selected with the push of a button. 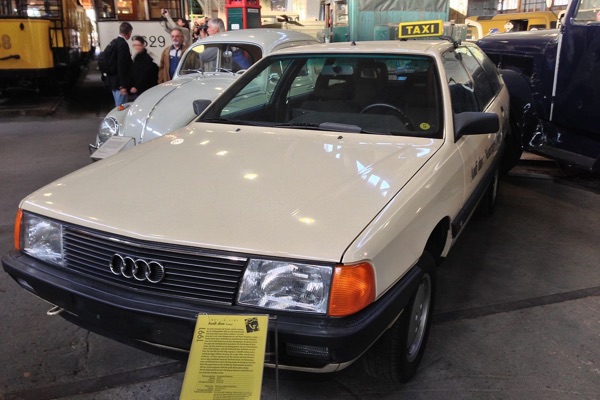 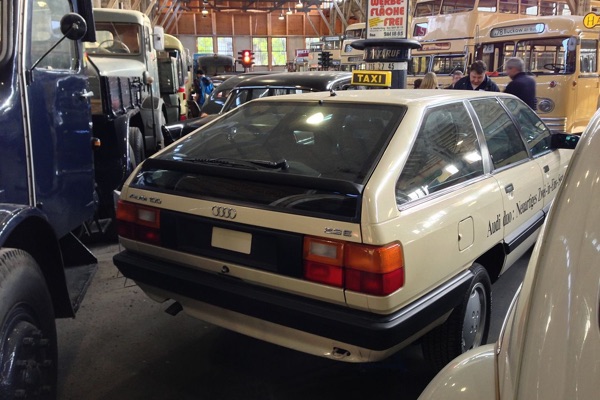 Like modern hybrid cars, the 1989 project used electricity when the car began moving and at low speeds. So you could say that the principle behind how hybrid cars work has not changed in 24 years.

During the launch, the company claimed that the car can cover approximately 80 kilometres on battery power alone, and that it takes eight hours for a dead battery to be fully recharged.

However, the hybrid's greatest shortcoming was its weight. Compared to the regular version of the Audi 100, the hybrid modification was about 200 kg heavier. 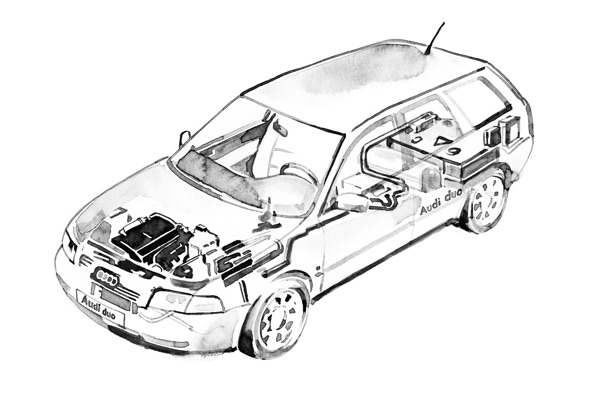 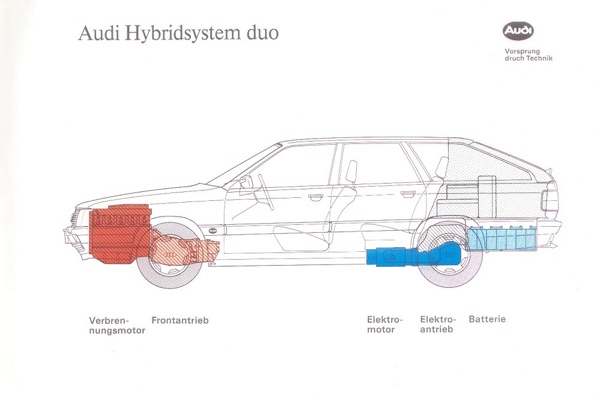 The car that captivated visitors at the Frankfurt Motor Show was only designed to demonstrate the ingenuity and inventiveness of its engineers. Driven by enthusiasm and a desire to see how the project will develop, the Germans produced ten units of this hybrid model. But that was not the end of it.

Two years later, Audi introduced an improved hybrid version of the Audi 100 based on the C4 model. Compared to the previous prototype, the second hybrid evolution had a permanent four-wheel drive system. There was a 4-cylinder, 2.0-litre engine mounted in front that charged the batteries in the boot when necessary. 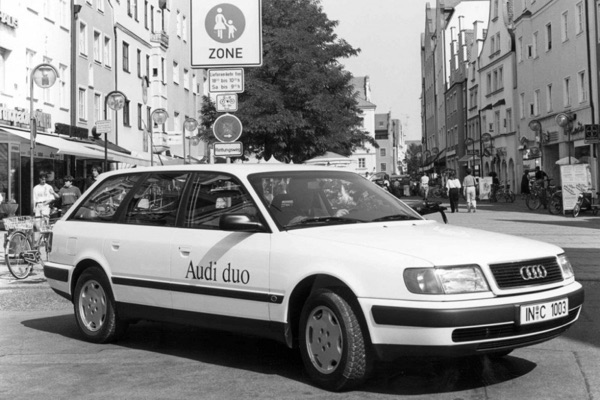 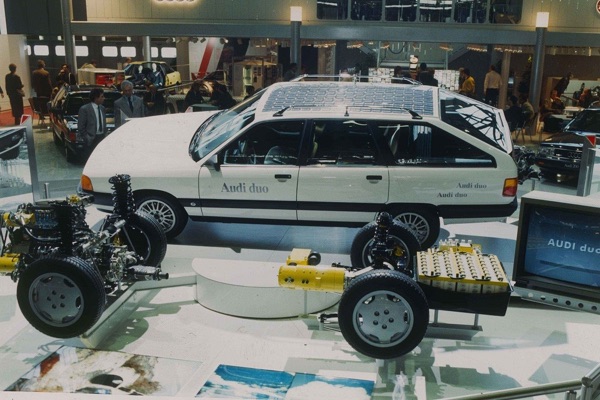 The third hybrid evolution was introduced in 1996. The petrol engine was replaced by a 1.9-litre diesel engine that produced 90 PS. This was coupled with a 29-PS water-cooled electric motor.

With the third hybrid evolution, Audi abandoned the four-wheel drive system and went with the traditional front-wheel drive layout. When using battery power alone, the A4 could reach a top speed of 80 km/h, while the top speed with the diesel engine was 170 km/h.

In September 1997, the Germans decided to try their luck and offer buyers a hybrid version of the Audi A4 wagon. The manufacturer wanted 60,000 Deutschmarks for this version, or about 30,000 euros. The relatively high price meant that Audi only sold 90 A4 hybrids.

Understanding that this experiment will never receive the attention it deserves, the Germans stopped mass production and put off further plans for hybrids. 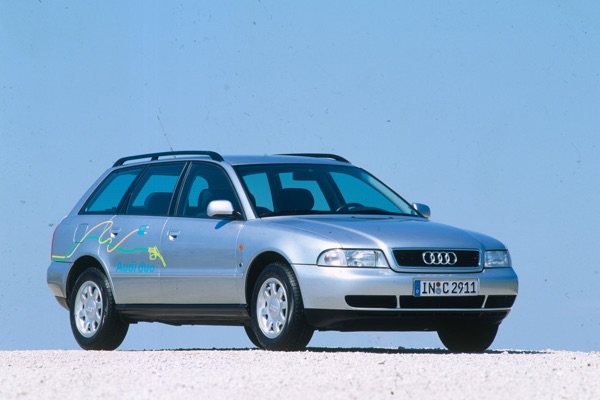 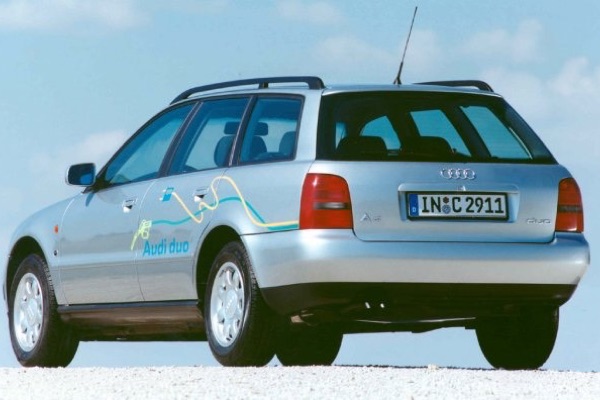 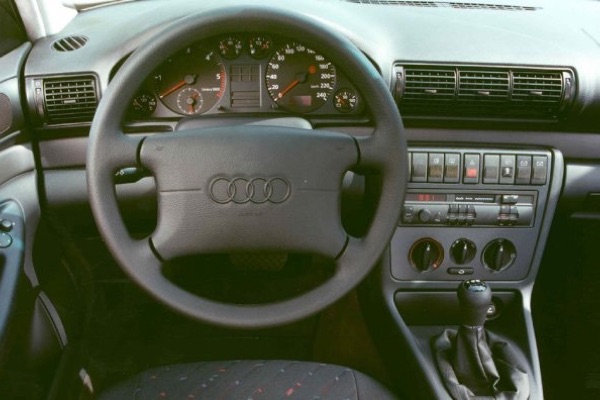 Not the first, but also not the last

In spite of the commercially unsuccessful project in the 1990s, the engineers at the German company continued to work on the hybrid car idea.

After the Audi A4 Duo III Hybrid was moved to the company museum in 1997, Audi only introduced another hybrid concept in 2005. At that time, the Audi Q7 SUV, which had an extremely powerful 4.2-litre, 8-cylinder engine but could also drive using power from electric motors, became Audi's pride and joy. 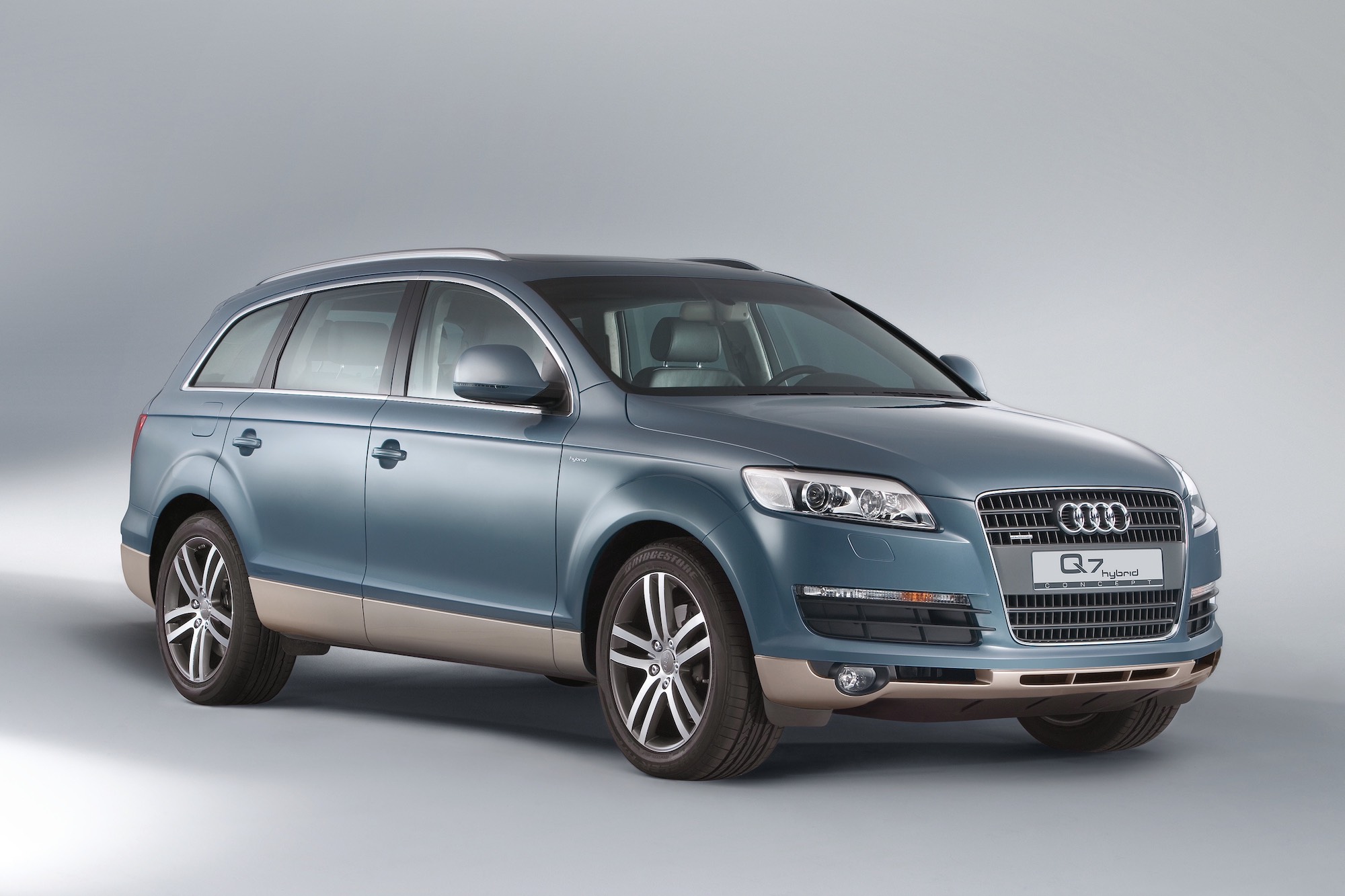 The hybrid train was back in motion, and the Audi MetroProject Quattro project, which later evolved into the popular Audi A1 hatchback, found itself in the spotlight in 2007. 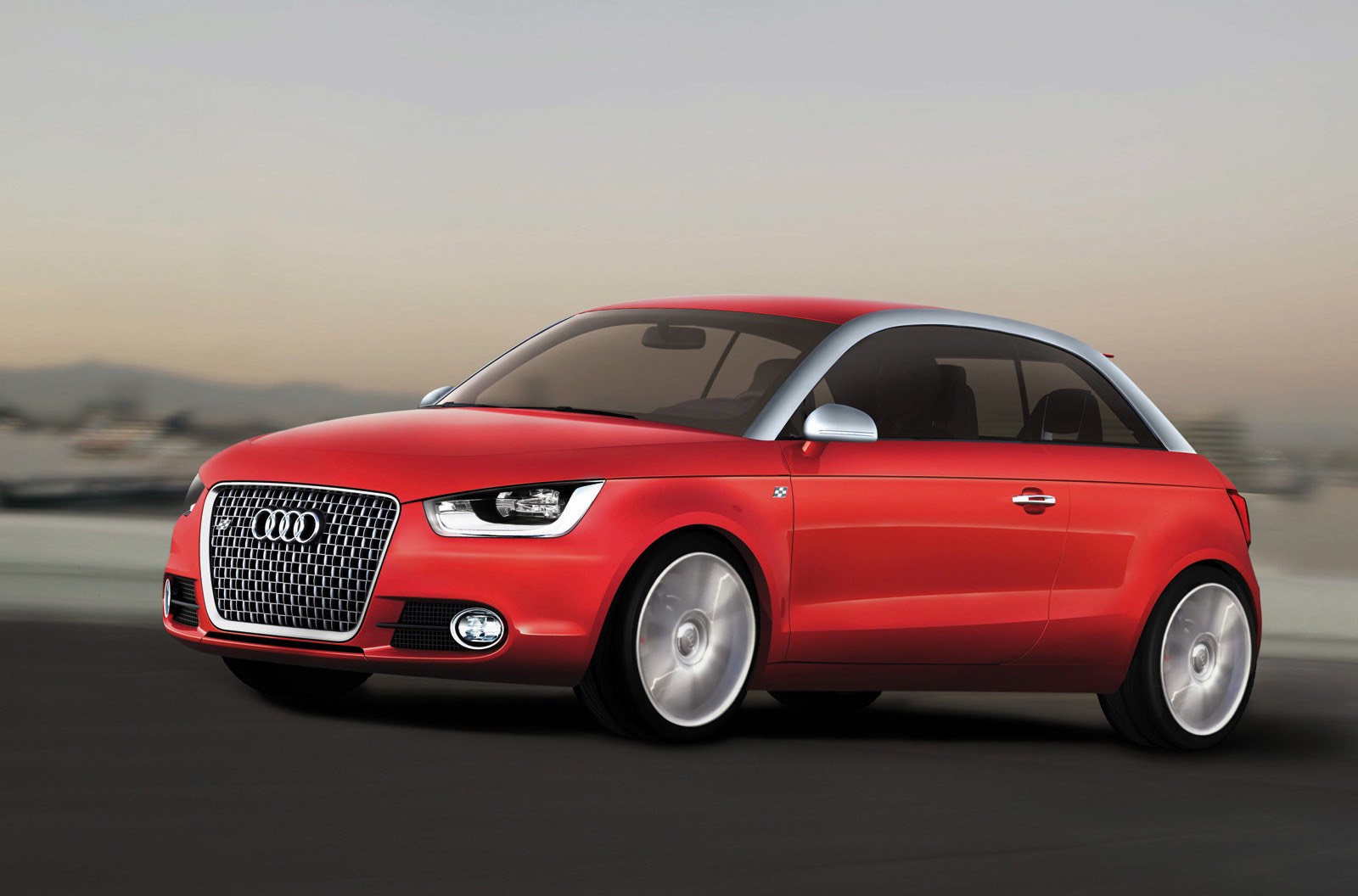 Like many innovative projects, the Audi A1 hatchback that made it to mass production was forced to give up certain things in terms of benefits and technology. One of them was the hybrid powertrain that consisted of a 1.4-litre turbocharged petrol engine generating 150 PS and 240 N·m of torque, and a 30 kW electric motor on the rear axle.

At the time, Audi claimed that this concept had an all-electric range of up to 100 kilometres and could reach a top speed of over 100 km/h.

2011 was one of the most memorable years in Audi's history – this is when it was officially announced that mass production of the first (even though it was actually the second) hybrid car had begun. Taking the rapidly growing demand for SUV-type vehicles into account, Audi installed a hybrid powertrain in one of its most popular models – the Audi Q5 SUV, with a 2.0-litre, 210-PS petrol engine and a 45-PS electric motor. 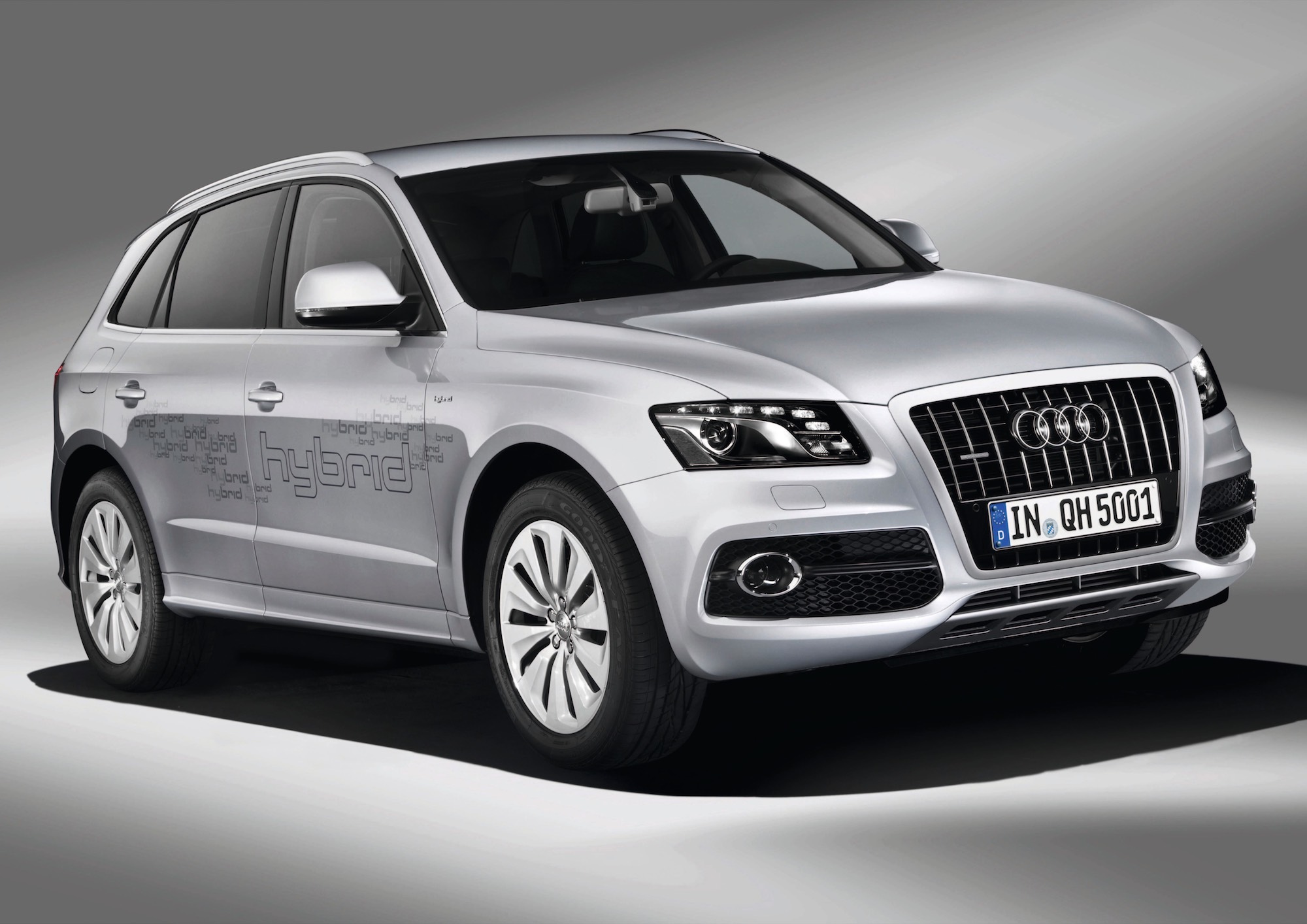 Even though it was late to get on the hybrid train, Audi was the first European automobile manufacturers to put a hybrid car into production. Audi is currently planning not only on expanding its hybrid model range, but also on investing in electric vehicle production. Audi has recruited Japan-based Sanyo, which specialises in the manufacture of electronic components, to help with this ambitious project.