Quattro is a name familiar to virtually any car enthusiast in the world – it evokes an image of a tech-clad modern day saloon with a supercar performance or an outrageous Group B monster weaving around crowds of spectators. This four-wheel drive system has become a cornerstone of Audi brand and history.

How it all came together

The story of quattro (the manufacturer insists on always spelling “quattro” with lowercase “q” as this is how it first appeared on their cars) begins in the late 1970s with a man named Jörg Bensinger. After witnessing how unstoppable the military VW Iltis was in slippery conditions of Finnish winter, Bensinger thought of adapting this off-road technology in a road car. He pitched the idea to Ferdinand Piech, Audi’s director of technical development and green light was lit for a four wheel drive project based on Audi 80. After building several test vehicles, the engineers discovered an inherent flaw of Iltis’ system performance on road - the drivetrain had no central differential, making test mules jittery and difficult to control in tight turns. Lockable open diff was thrown in between the axles, resulting in the very first version of Audi quattro. 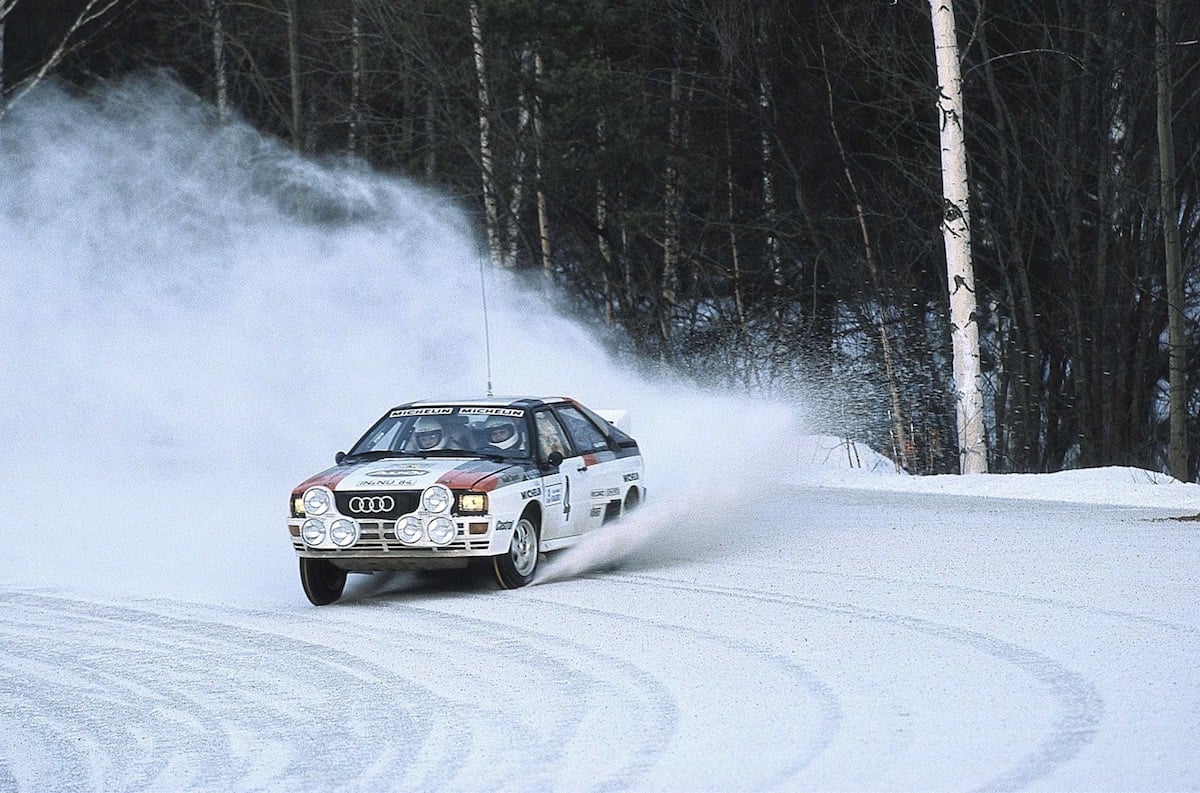 Initially, the advantages of quattro were discovered on snow
© Audi AG

The said central differential was quite an engineering masterpiece, aside from being lockable it also featured a hollow driveshaft housing another shaft. Driveshaft coming from the engine was wrapped around the one driving front wheels. Not only this design was compact and light, but, coupled with longitudinally mounted engine, it offered almost perfect side-to-side weight distribution. Quattro critics may point to resulting awkward mass difference between the axles – the engine was sitting so far up front, it was almost between the headlights. While there is truth to these remarks, no one can argue with Audi’s motorsport victories which they owe to quattro Later iterations of the system had Torsen limited slip differentials in the center and in rear, eliminating the need for manual locking. 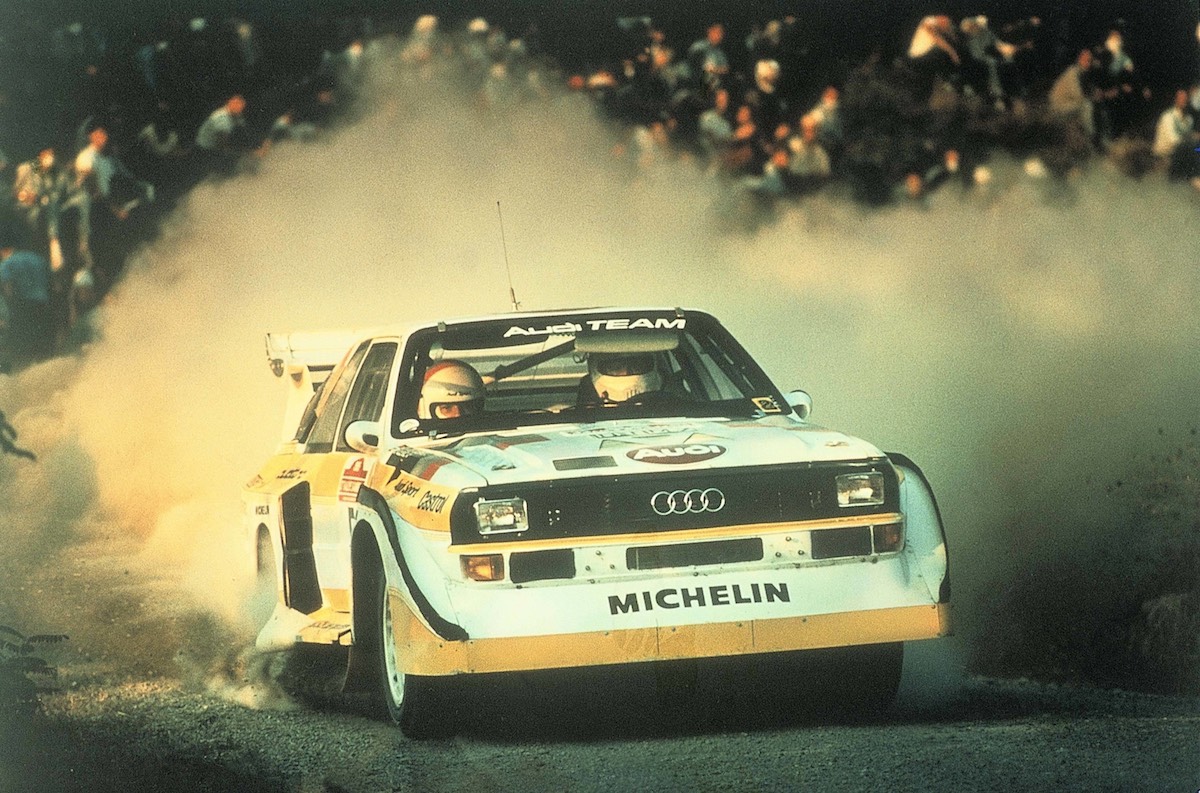 1980s was truly a decade of Audis, it started with an overwhelming domination of world rally championship in 1981. The rally car was based on production quattro (4wd version of Audi Coupe), sharing the bodyshell and the turbocharged five-cylinder. It was extremely easy for Audi to dominate the field as all of their competitors entered the rally with two wheel drive cars. In fact, before Audi, there were no serious attempts to use four wheel drive in rallying. 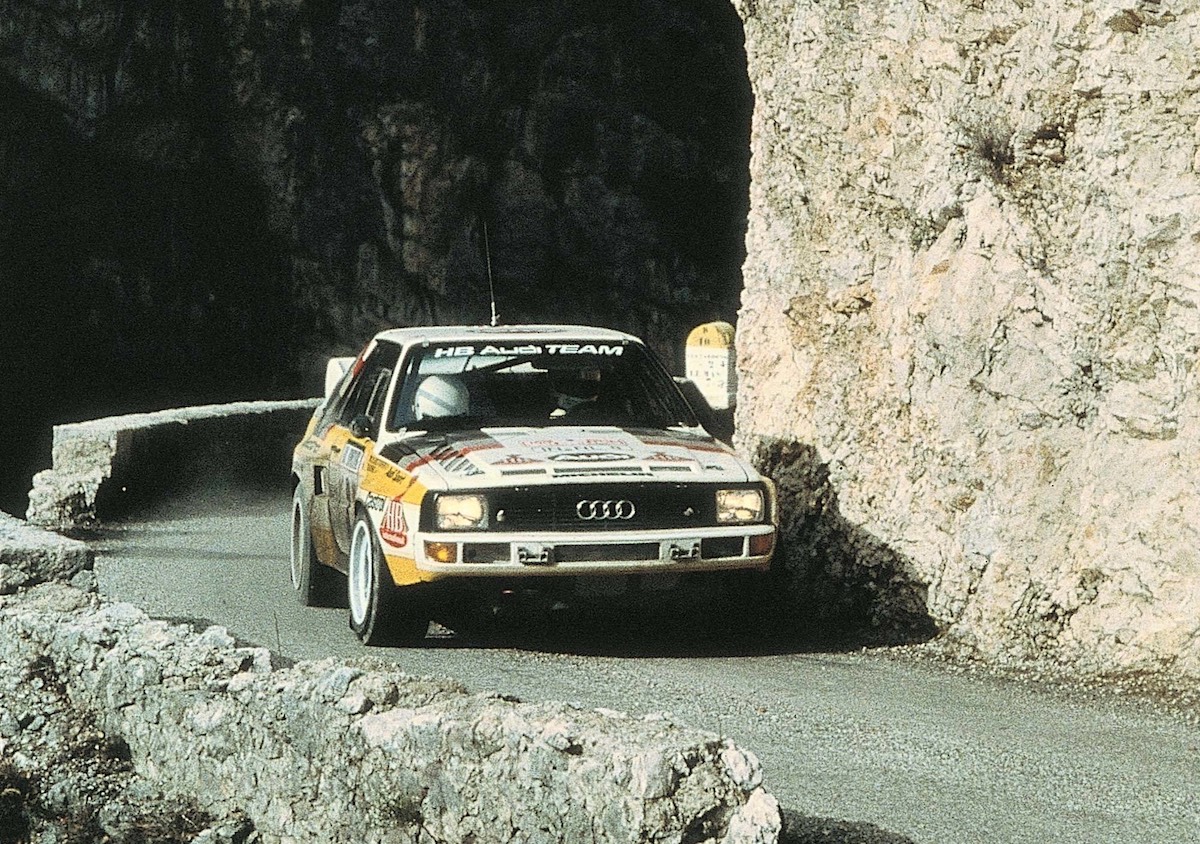 Quattro really came into its own in 1983 season, when the A1 version of the rally car debuted. It was built for the infamous Group B, and only featured external resemblance to the production car – this rally monster was shorter, more powerful and much lighter. Group B featured virtually no restrictions on engineering, thus quattro sported exotic materials like carbon Kevlar and its turbo produced endless amounts of boost. 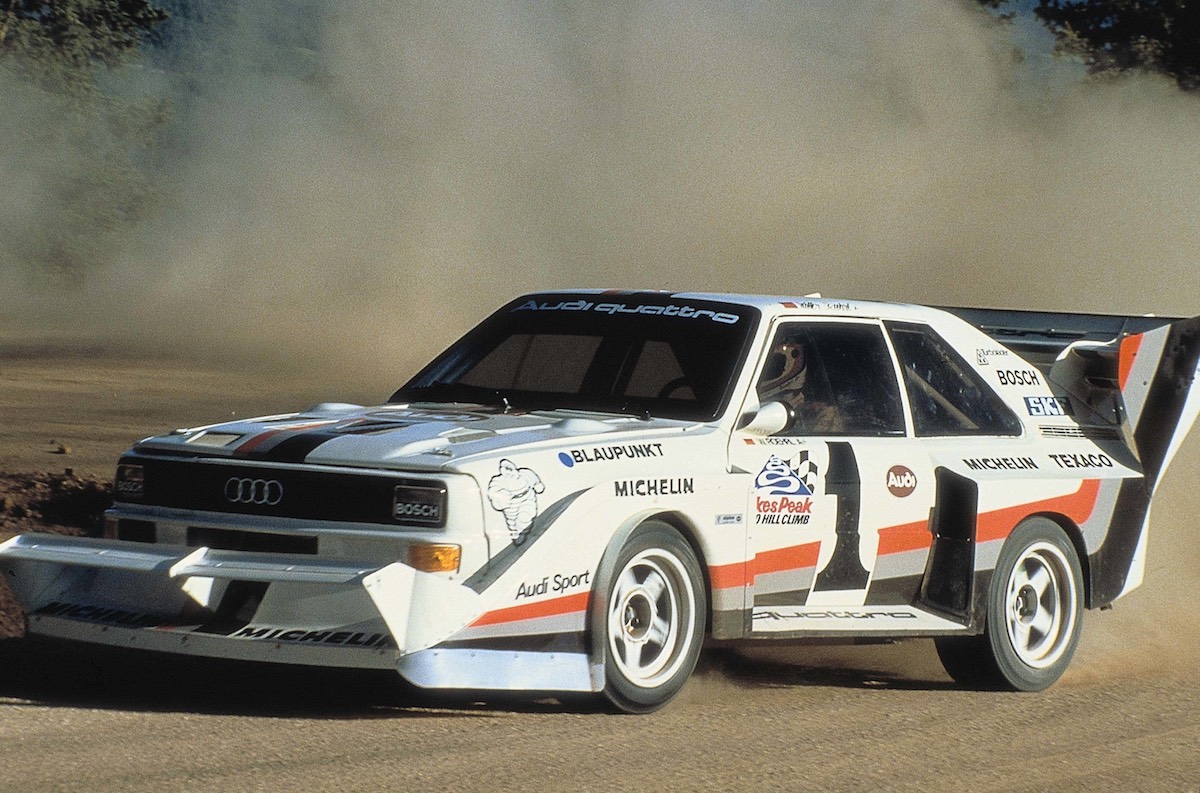 Due to this boost, the Group B versions of quattro produced anywhere between 350 and 600 bhp, latter number was produced by the final Sport quattro S1 E2 race car. This car was a technological tour de force, with sophisticated aero package and a “power-shift” gearbox, a predecessor of DSG. All of this gravel madness was brought to a halt when FIA pulled the plug on Group B in 1986 after several fatal incidents. After this unfortunate development, Audi still brought their car to win Pikes Peak in 1987 with legendary Walter Röhl, take a look at this Sport quattro S1’s swan song:

Although Group B days earned quattro a legendary status and endless views on Youtube, the sporting career of this system was not contained strictly to gravel. Audi disrupted circuit racing when they entered Trans Am series in 1988 with their full sized Audi 200 saloon. To everyone’s surprise, the large car was extremely competitive against pure-bred sports cars such as Chevrolet Corvettes or Merkur XR4tis (American version of Ford Sierra XR4i). In fact, quattro system was so advantageous, SCCA banned it for the following year of the championship. 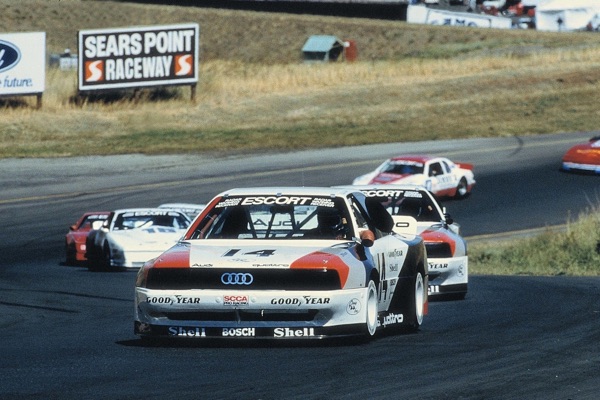 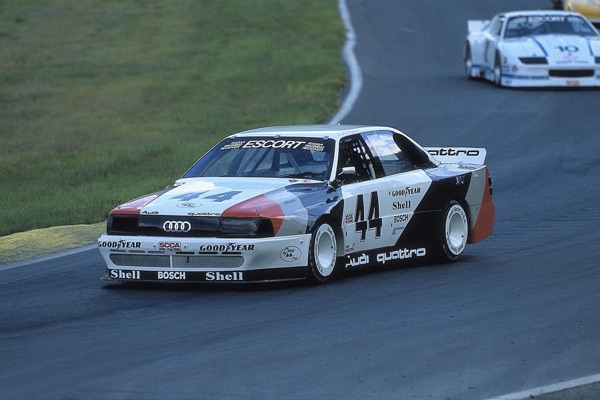 Due to strict Trans Am regulations, racing 200 did not differ much from the road-going model
© Audi AG

Consequentially, the Germans focused their efforts on much less constrained IMSA championship, for which they have devised a wild version of Audi 90. IMSA Audi 90 GTO was closer to the aforementioned Group B machine than it was to the road-going Audi 90. With 720 bhp on tap, these cars launched to 100 km/h in around 3 seconds. While they did very well in racing, it was far from the ridiculous lead Audi had in Trans Am series. After racing IMSA in 1989, Audi has largely stopped experimenting with quattro in motorsport. 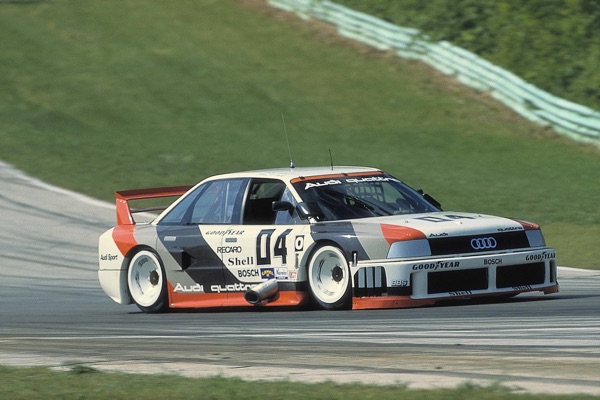 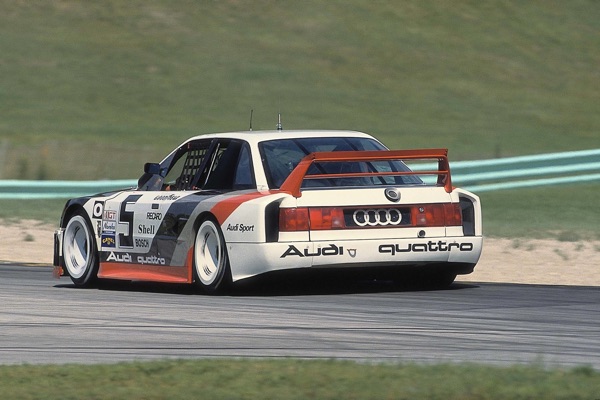 Enthusiasts can get their hands on the original quattros – Audi has produced a sporty 4wd version of first generation Coupe for 11 years. All of them offer quintessentially 80s styling with flared arches as well as the glorious turbocharged 5-pot. Although quattro has not changed much externally during its lifespan, Audi implemented multiple revisions under the shell. The earliest cars, also known as Ur-quattro, had lockable open center and rear differentials, mated to a 2.1 liter 10V SOHC engine, which was good for 197 bhp. Later versions got more advanced, with implementation of Torsen differentials and larger 2.2 liter 20V engines, putting out around 220 bhp. The successor to quattro was Audi S2, based on B3 generation of Audi Coupe and using a similar engine and 4wd system. 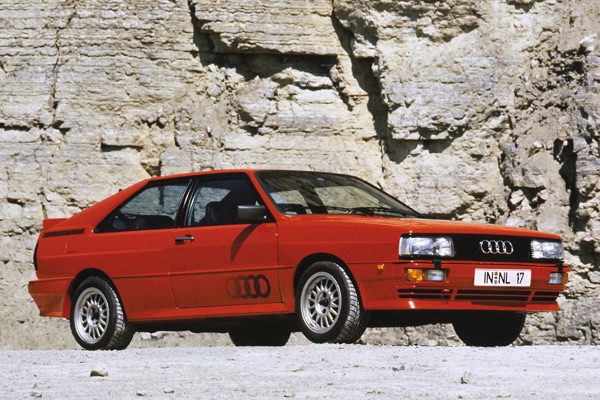 Road going quattro was based on Audi Coupe, but had flared arches and quattro badging
© Audi AG 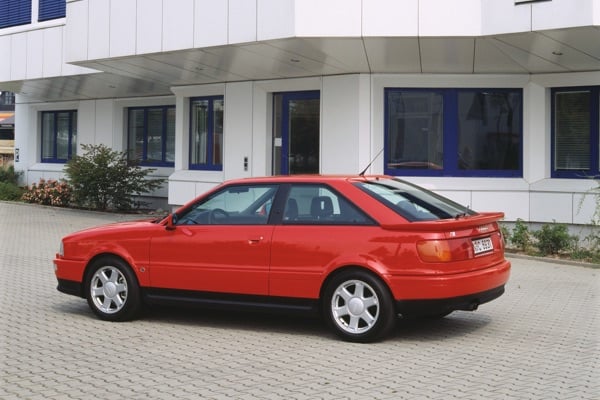 Nowadays, quattro logo appears on ludicrously fast Audi estates, such as RS6 and RS4, but Audi RS2 Avant was the one to start this tradition. Based on the mundane Audi 80 B4, this joint operation between Audi and Porsche utilized similar internals to previous road-going quattros – 2.2 l engine and Torsen-based 4wd system. Porsche fitted Audi’s motor with a bigger turbo, resulting in respectable 311 bhp. To cope with this hike in power, Porsche also developed beefier brakes and sophisticated suspension. In fact, each and every one of 2891 RS2 Avants produced were even assembled by Porsche. Most of these cars went to Europe and are very sought after today. 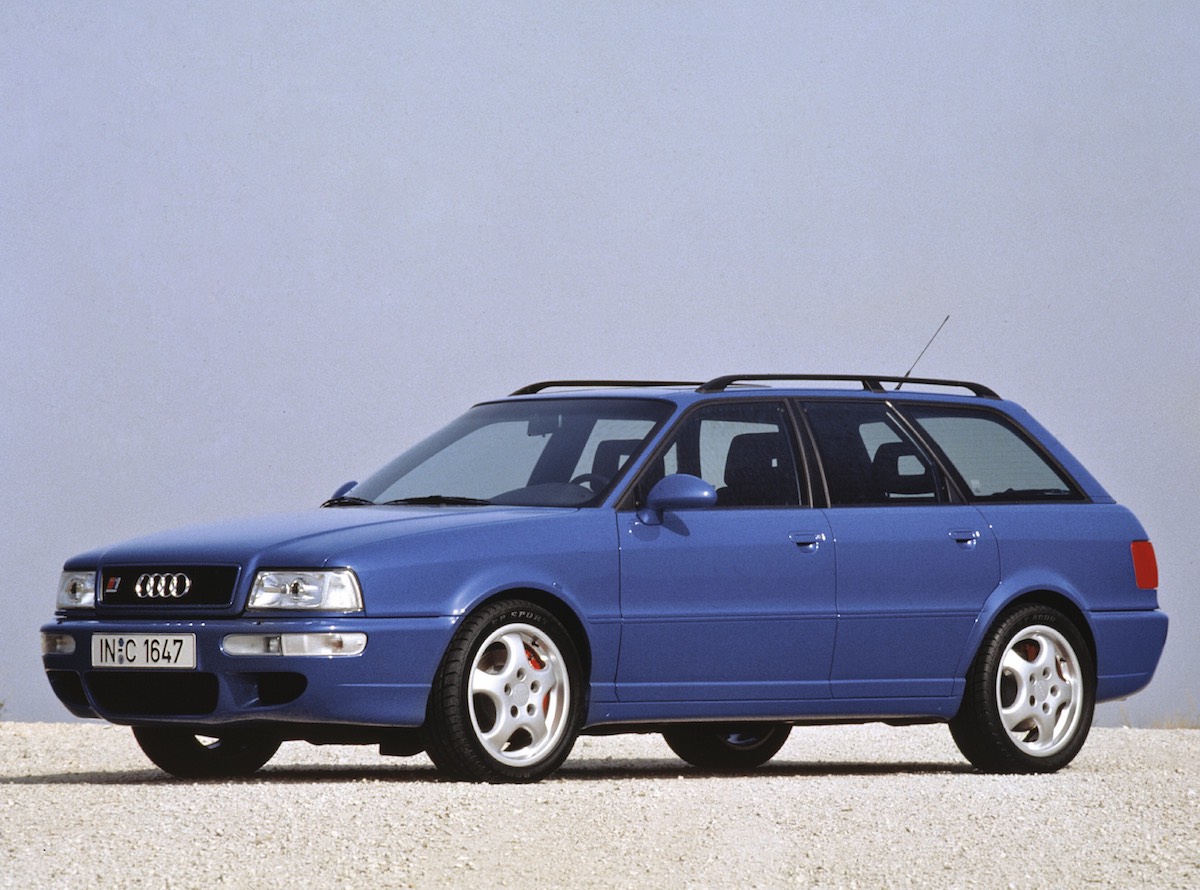 Since then, the quattro system has been implemented in numerous Audis, and these days the badge marks anything from mind-boggling fast hatchbacks, saloons, estates or even SUVs of the RS range to regular cars with 4wd. Quattro brand now denotes a vast variety of four wheel drive solutions, including ones with transversely mounted motors, Haldex coupling and clever electronic wizardry. Although these solutions are light years away from the original rally-bred power transfer technology, one can always rely on quattro for traction.