The role of automotive advertising is really rather straightforward – making a car stand out from the rest, emphasizing its virtues, making it desirable. And yet, formulaic advertising can easily result in the opposite, when all ads promise you freedom, adventures with zero percent interest financing, they drown in the sea of lookalikes. Suddenly, they all disappear from our memory. Can you recall the last car advertisement you saw? I can’t either.

Yet every now and then, there is an ad campaign that stir things up, gets people talking and change the advertising industry forever. Here are some of my favorite historical ads.

First-gen Honda Civic was a non-conformist option when it first came out in US. It was a tiny car with a small 4-cylinder motor, a polar opposite of the American offerings at the time. Despite all of these limitations the Civic was promising to be a refreshingly fun automobile to drive, with its low curb weight and zippy motor. It was a smack in Detroit’s face, but when it came to advertising the little Civic, Honda decided to deal another blow to the establishment by targeting the prevailing gender roles.

As crazy as it may sound, back in the 70s it was common belief that manual gearboxes can only be operated by men. Generally, it was thought that all women have an extremely hard time driving and in order to sell them a car it had to be easy to steer, a breeze to park and, crucially, come with an automatic. Just like you see in this old Mini ad. 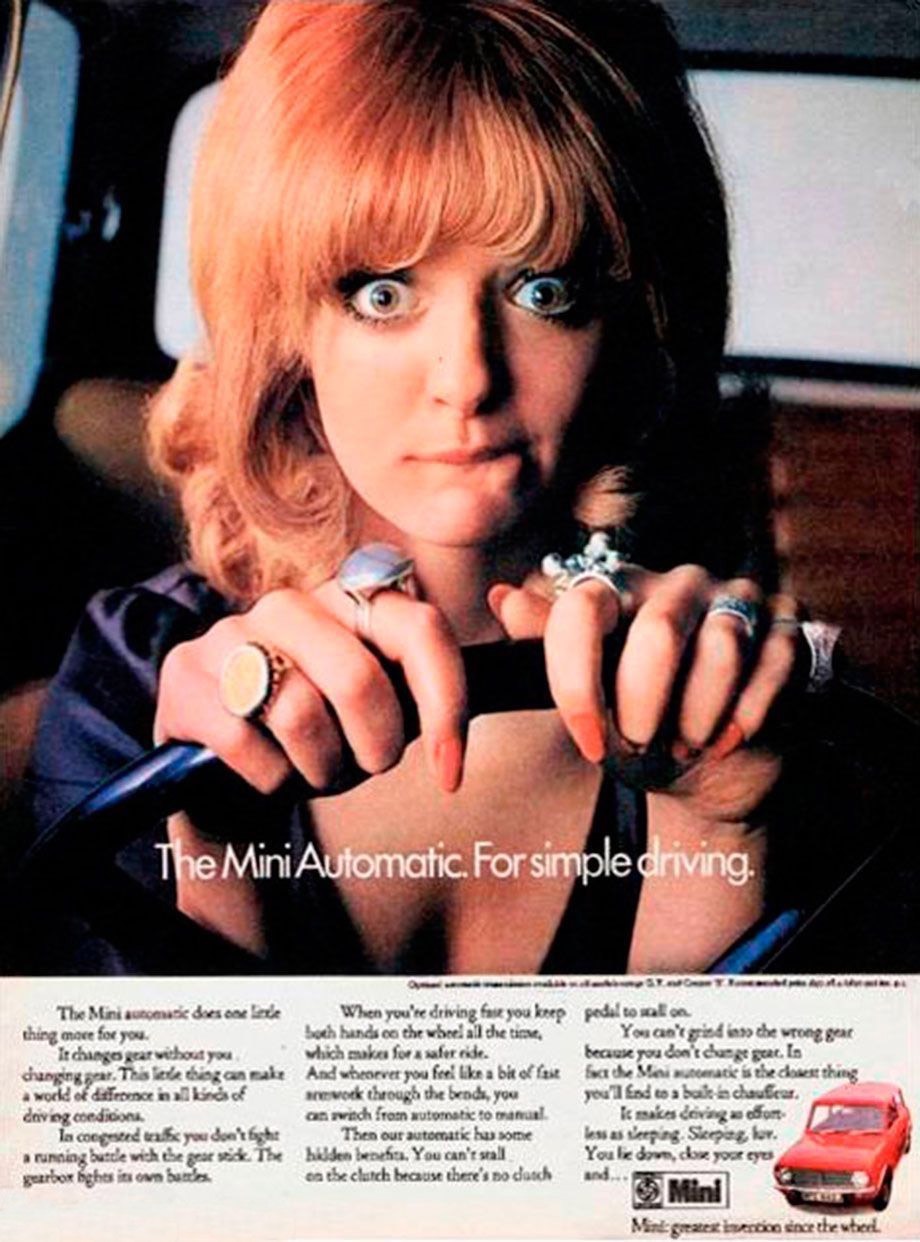 Honda saw the absurdity of gendering cars and openly mocked them in a series of print ads encouraging women to try the affordable thrills of the Civic. Both genders were invited to enjoy its engaging gearbox, crisp steering and zippy motor while hooning the car on roundabouts and parking lots. Honda’s ad fits neatly with the spirit of the times, USA was getting more liberal in the 70s and women’s right movement received a lot of mainstream attention. Pretty soon, gendered automotive ads became a thing of the past. 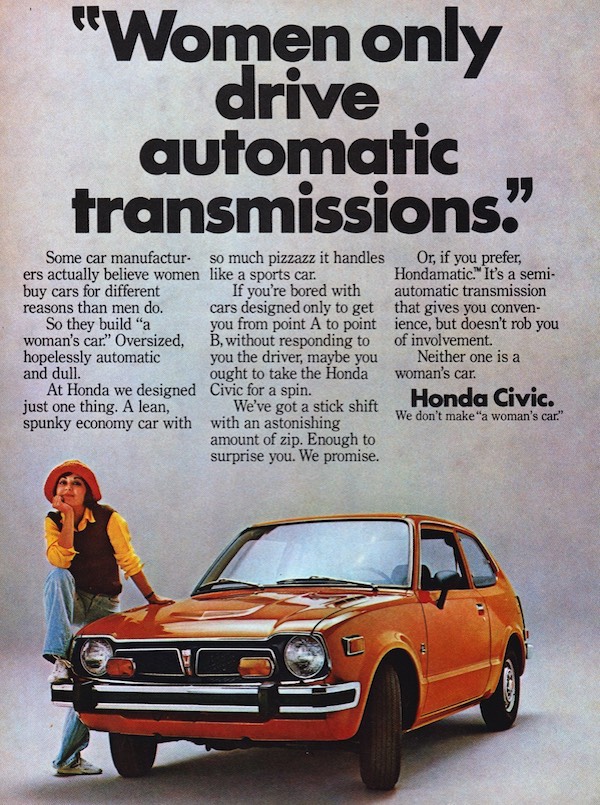 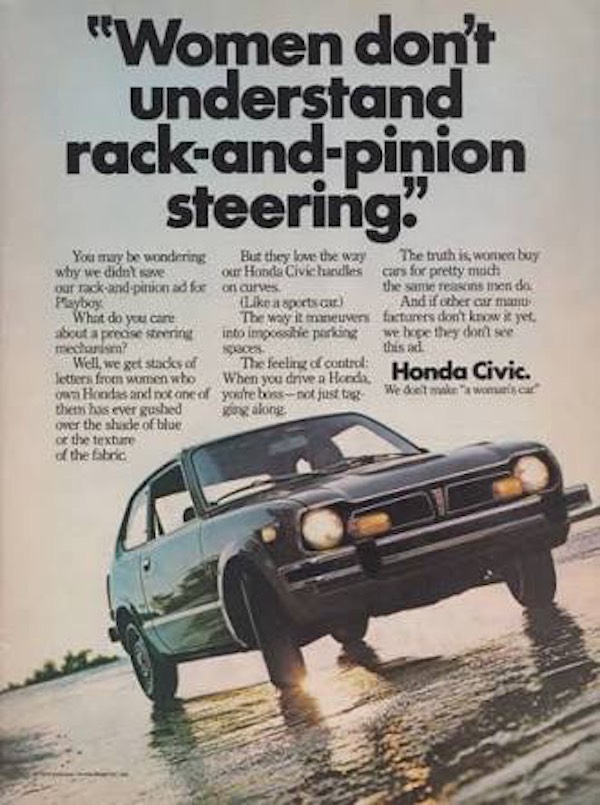 Baffling the viewers with Citroën CX2 and Grace Jones

Citroën is generally known for being unusual and daring manufacturer, but this TV spot from mid-80s is odd even by Citroën’s standards. It features one of the most eccentric figures in pop culture at the time, Grace Jones driving. Rest of the 40 seconds clip is quite abstract, and, aside from the final phrase “beauté sauvage” (wild beauty), is really tough to grasp. Despite being so open for interpretation, there is no doubt the ad is meant for the Citroën CX. There is no way a similar spot would work for, let’s say, a Toyota Camry. 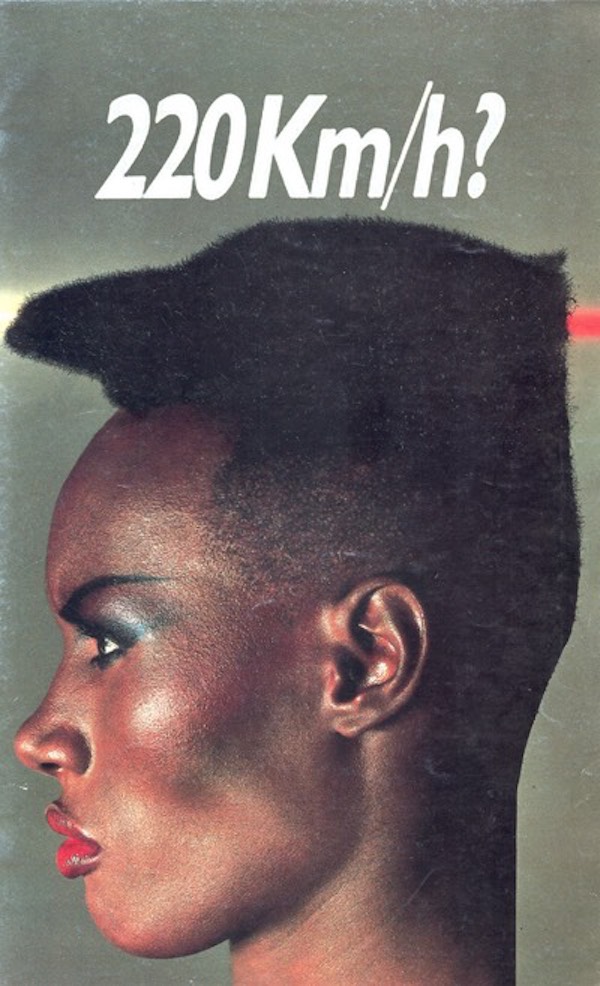 This was essentially the Twin Peaks of car advertisements as it didn’t look like anything that has come before it. But that was what made the ad really stick. So much so, that while scrolling through Youtube comments under this ad, I found several confessions from people claiming this ad has been haunting them for the past three decades.

This listicle wouldn’t be complete without mentioning one of the greatest automotive ad campaigns of all time . Actually, according to AdAge, that is the best ad campaign of the past century. It managed to sell a Nazi-designed ascetic commuter car in US during the economic boom of the 50s, a.k.a. a decade of prosperity. DDB ad agency knew this was a difficult which required thinking outside the box.

And think outside the box they did. In 1950s, American cars were getting more lavish by a minute, and so were their ads. Every print was filled with loud statements, happy faces and car’s features, overwhelming the audience and leaving them perplexed. Just like the Beetle, the ads had only the most essential features and not much more. They were comprised of a minimal photo of the car and a short text highlighting only one virtue per ad. That was it, no excessive gloating, and no information fatigue for the reader.

It wasn’t only the format that was novel, ads’ content was unconventional as well. They often featured tongue-in-cheek statements as “If you’d run out of gas, it’s easy to push”, highlighting how the car is not overloaded with pointless gadgets. Or “Ugly is only skin-deep” humble bragging how under the unassuming shell there’s thoughtful engineering. Most other ads emphasized genuine merits of the little Volkswagen, such as reliability, fuel economy, timelessness or ease of maintenance. Suddenly, a Nazimobile was transformed into a smart choice for a smart American. 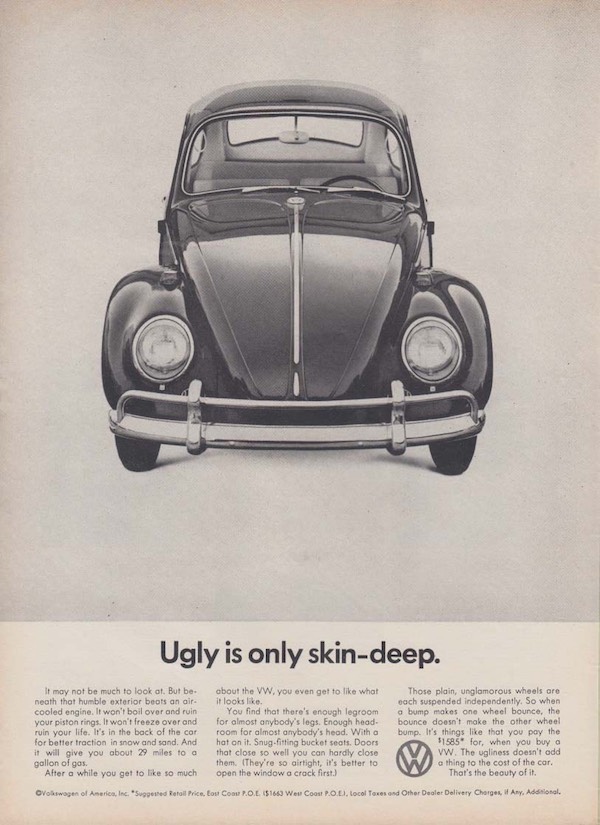 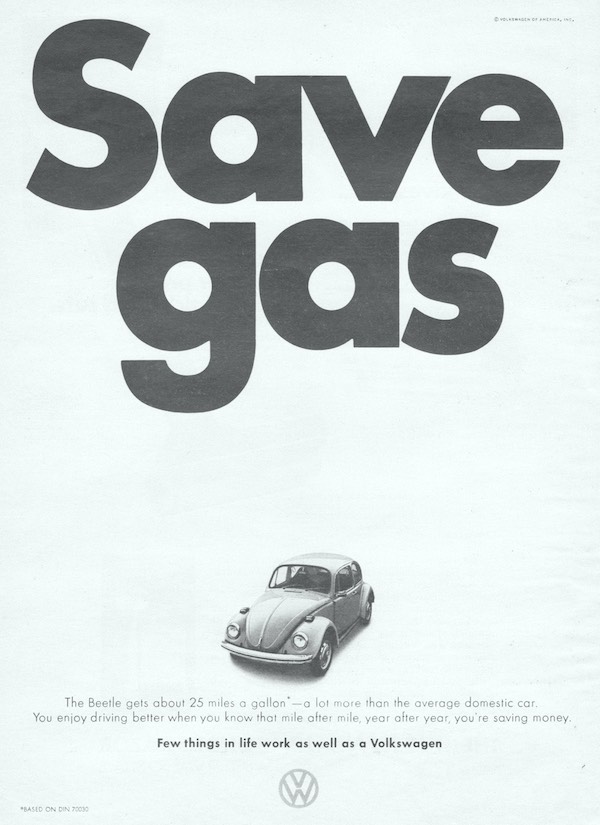 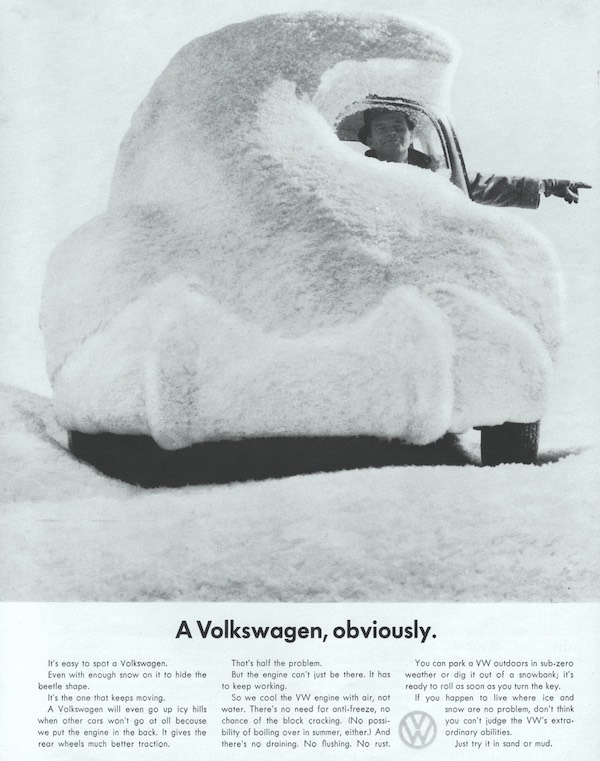 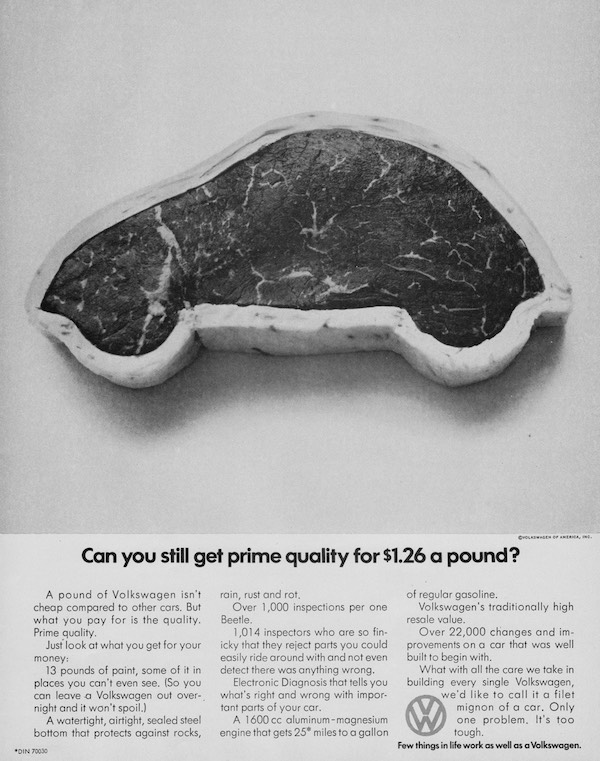 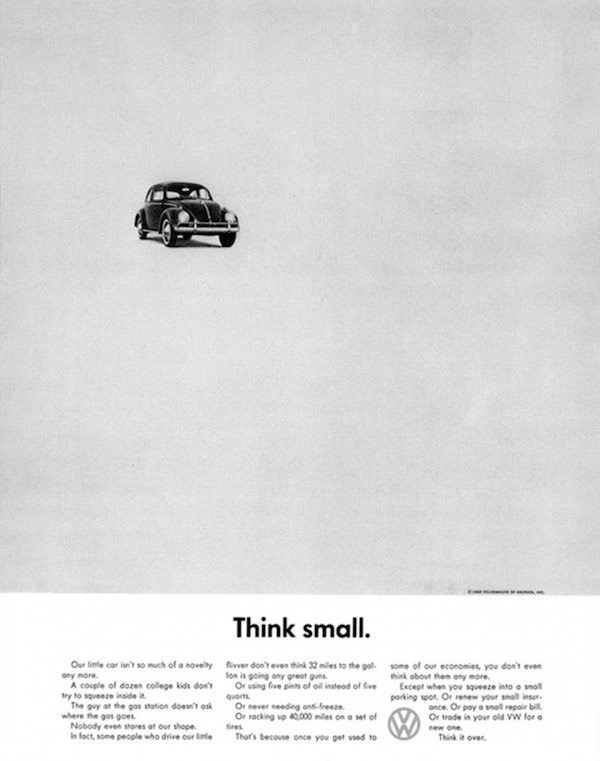 Despite being half a century old, this ad campaign remains a textbook example of advertising genius, turning the negative into positive. Over the years, Volkswagen themselves had come back to the template over and over again, and many imposters were trying to replicate the style.

In retrospect, it doesn’t take much thought to see why all of these ads are brilliant in their own right. But don’t be fooled by this obviousness, it takes a brilliant creative mind to take a step back and tailor a message so memorable and so perfectly suited for the car. Advertisements like this persist and withstand the test of time rather than be fade away moments after seeing them.