Ferrari and the V8: Two Ingredients Worthy of Each Other

The history of the Ferrari brand deserves a separate article, book or even documentary film. Car enthusiasts will never get tired of listening about Ferrari’s achievements in the motorsport arena or Enzo Ferrari’s character, which was something like that of a stubborn goat.

From the company’s very inception, Ferrari has focused on a variety of motorsport disciplines. That was Enzo Ferrari’s passion and goal – not only to participate in motorsport races but to dominate as well.

As the Ferrari name quickly grew bigger and stronger, Enzo Ferrari was impelled to create a separate division in order to take care of models that were designed for use on public roads. Initially, the authentic Ferrari models were neither very interesting nor worth any major investments. The situation changed dramatically after Enzo Ferrari made a deal with Gianni Agnelli, who back then was the head of Fiat and the engineer steerer of Italy’s economic locomotive. In the late 1960s, Fiat acquired 50 percent of Ferrari, and that is when the rapid modernization and development of the Italian brand began.

The Ferrari Dino 246 was the first joint product of the two corporations. It was also the first Ferrari model that allowed the manufacturer to test the waters of the international market. It was due to the appearance of the Dino 246 GT that Ferrari got a name not only as a motor racing team but as a car manufacturer as well.

Mentioning the Ferrari 246 GT in this story is only necessary in order to mention what launched the real company’s outburst. It was the Dino 308 GT4 that came out in 1973 and gave the Ferrari brand a real electrical shock. 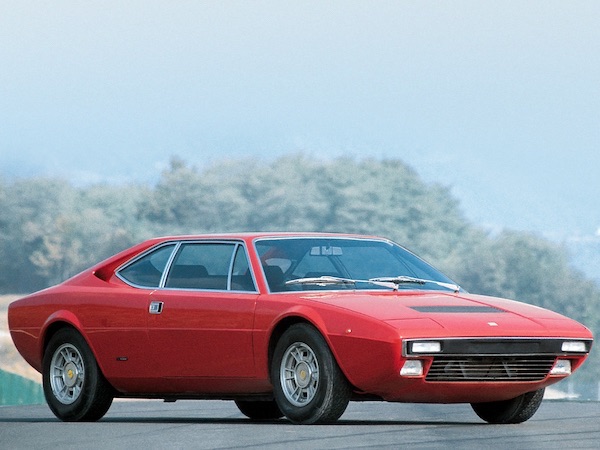 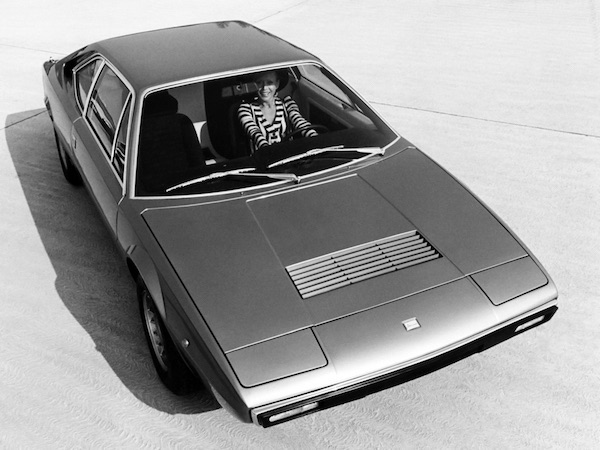 The Dino 308 GT is important for a few reasons. First, it was the first Ferrari model that had a mid-mounted V8 engine – a configuration that would later become the key to global success. Second, it was the first car developed in cooperation with Bertone instead of Pininfarina. And third, the 308 GT4 sported the Dino badge. At the beginning of 1973, Enzo Ferrari have decided that models without V12 engines belong to a completely different brand. And that is how Dino was born – a brand named in honor to Enzo Ferrari's son that existed for just three years. 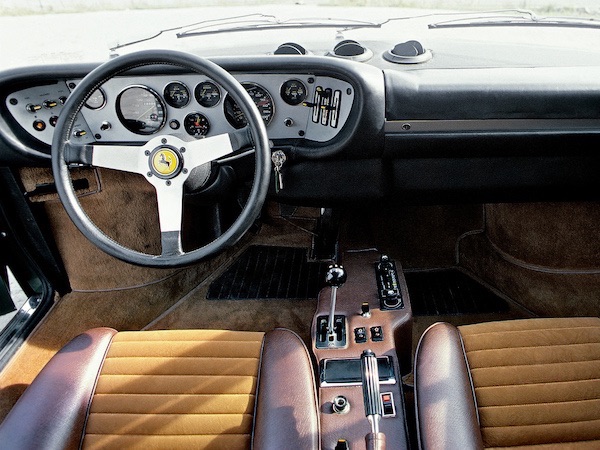 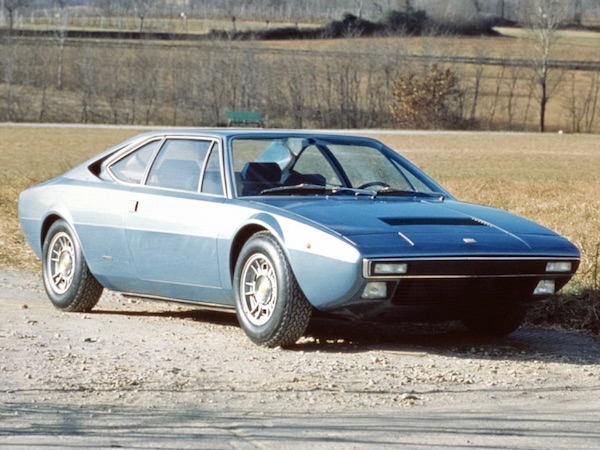 Ferrari has always been associated with Formula One and thunderous cars with 12-cylinder engines under their bonnets. In the 1970s, Ferrari founder and manager Enzo Ferrari have realized that the motorsports programme could potentially be funded with the money generated by other models. For example, those that were designed for use on public roads.

Introduced in 1975, the Ferrari 308 GTB was different from its predecessors and all other Ferrari models. It was geared not toward millionaires, but toward middle-class drivers who were sick to death of Porsche, Mercedes-Benz, and Jaguar. 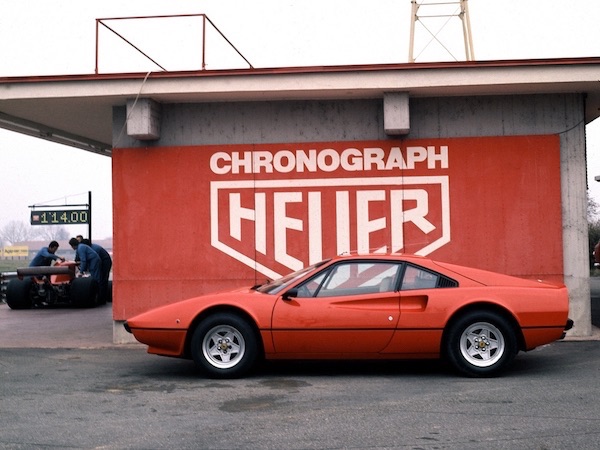 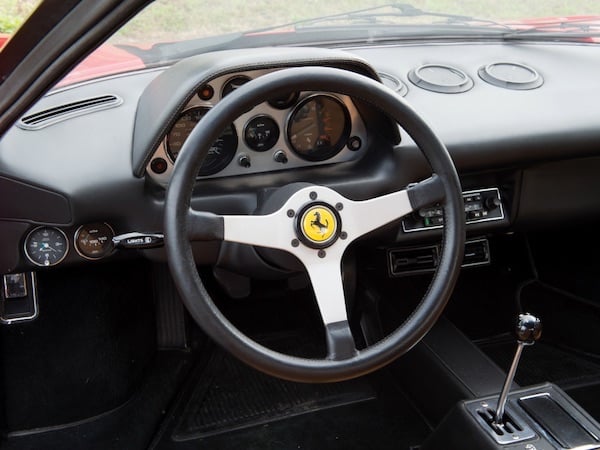 The Ferrari 308 GTB became the first model from this marque that received not only global recognition but also a commercial success. Particularly in the US market, where the majority of the 308 GTBs were shipped to.

The car was adored for a few things: its compactness, agility and amazing handling. The car was also praised for its dynamic features, because the body of the Ferrari 308 GTB was made of fibreglass. Because of that, it was possible to reduce its curb weight to a ludicrous 1,090 kg. For comparison, the modern Mazda MX-5 weighs considerably more.

After coupling an extremely lightweight body with a sweet-sounding V8 engine, we were left with an outright addictive vehicle. The first Ferrari car that could boast of good sales was also the first real sports car with an 8-cylinder engine.

Motoring journalists adored the Ferrari 308. For example, a member of the editorial board of Car and Driver admitted to driving the Ferrari 308 in an illegal race where he tried to prove its superiority over the Porsche 911. While bragging about his behavior, the journalist revealed that the Porsche hung onto the back of the Ferrari until the moment the cars reached 190 km/h speed. Then, the Ferrari 308 managed to escape and leave its opponent in the dust.

In 1985, Ferrari introduced a new family of 308 models – the 328. This was not a completely new model, but it was a major revamp of the old one. Ferrari made some small modifications to the body style and the interior. By putting in a 3.2-litre V8 engine, the car could generate 270 hp and accelerate to 100 km/h in 5.5 seconds. 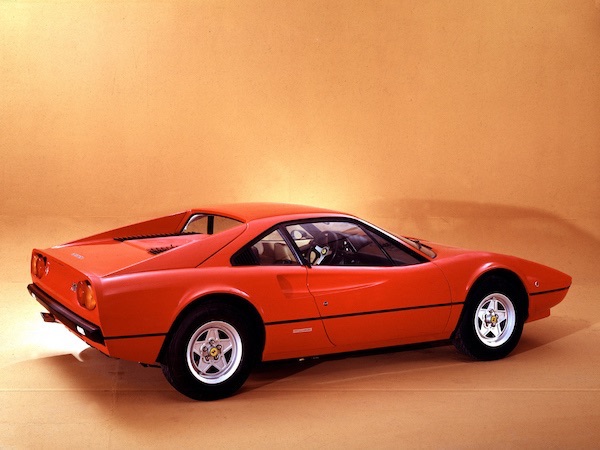 The minor changes made it possible to maintain a huge buyer interest especially in the US. There, the Ferrari name always sounded exotic and associated with TV series Miami Vice that won viewers hearts in the 1980s.

It was the last Ferrari model with a transverse engine in the rear. Though this concept was abandoned not because of a lack of popularity. In 1989, the 328 had been replaced by the 348. Over 20,000 models of 308 and 328 were produced in total, with 12,000 of them being 308s. These Ferrari models with V8 engines gave the company a real boost. They also proved that Ferrari is capable of creating more than just great V12 engines. 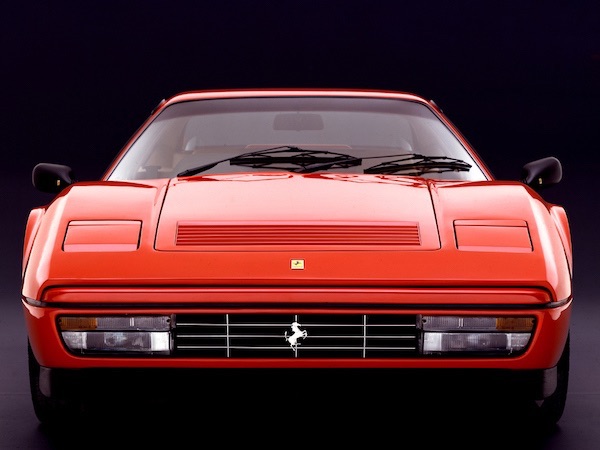 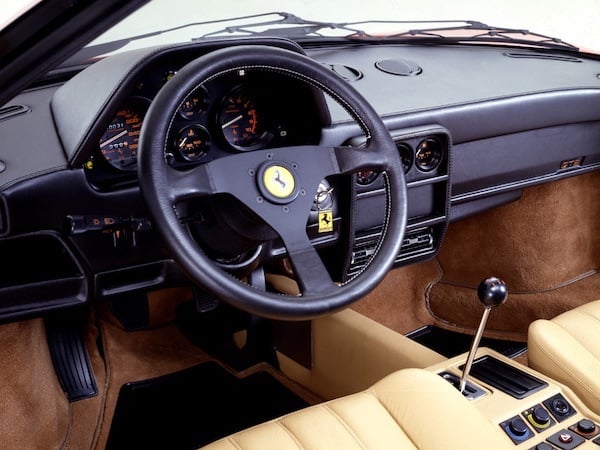 The Ferrari 328 was the last model with a transversely mounted engine built by this company. Models 348, 355 and others that came out later had engines that were mounted longitudinally. This decision was made when Ferrari started using a new chassis design.

Now, the Ferrari 328 is not only of interest to collectors. It also interests people who want to own a classic Ferrari that is easy to maintain. The Ferrari 328 and its predecessor, the 308, feature a fairly simple design that allows doing the most important work in your garage. But if you are skilled and have enough time, you could actually carry out a full-fledged Ferrari maintenance in your own backyard.

Over the company’s incredibly colourful and rich history, Ferrari managed to create a few impressive hits, especially during the V8 engine era. Obviously, like many companies, they also had their misses, but the Ferrari F355 was the car that returned the company on the road to success.

The Ferrari F355 went into development at the same time when the illustrious and very outspoken Luca Cordero di Montezemolo took the helm of the company. And he was the one who constantly monitored the development of the F355 model and made sure that the new Ferrari will stun the world. 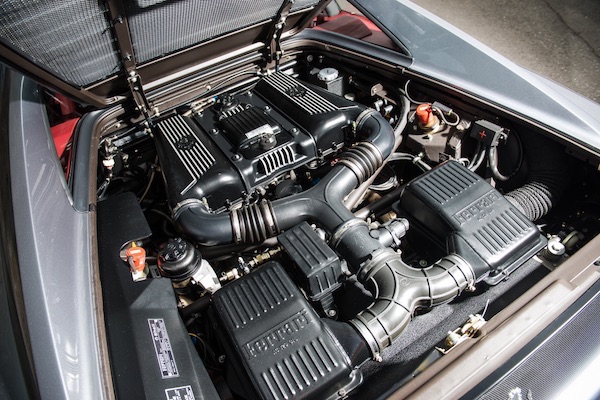 Each Ferrari model has to be beautiful – something that makes you look twice. The F355 did just that, but to this day, many people get surprised when they find out that its body was fine-tuned in a wind tunnel. The engineers spent over 1,300 hours to reach the desired result. Yet they still managed to preserve the fantastic, timeless body lines.

The most notable news was the automated manual gearbox that became the precursor of the early DSG or PDK type of gearbox. The first DSG came out in 2003, while Ferrari began using this technology much earlier – in 1997.

When Ferrari had introduced this model in 1994, many members of the press tested it. After the test, they gushed over it and named F355 the best Ferrari of all time. Nobody would have ever thought that this label would be granted to another Ferrari model.

In 1999, Ferrari held a presentation of the 360 Modena along with test drives for representatives of various publications. Compared to highly acclaimed F355, the new model was more agile, faster and efficient. In other words, it was superior in every sense. And you know what? Once again, Ferrari executives had to accept a huge wave of compliments.

The 360 had an entirely new aluminium chassis that was 40 percent stiffer than the F355. It was also 28 percent lighter. The suspension, interior and other key elements were new as well. Nevertheless, the F355 and the 360 shared one very important feature – the 8-cylinder V-shaped engine next to the rear axle that became the calling card of successful Ferrari models. 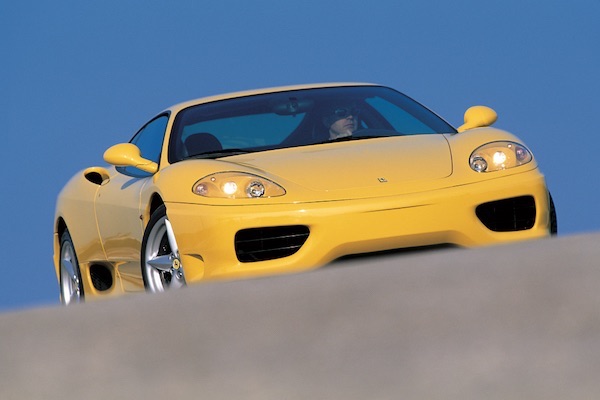 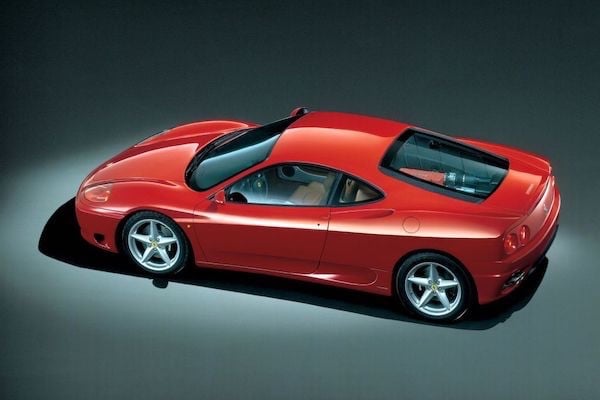 Like now, new car buyers back then were willing to spend huge amounts of money in the name of progress. And that is exactly what Ferrari did with the F355 and 360 models, demonstrating tremendous progress and building cars that were competitive.

The lessons learned during development of the F355 and 360 models were transferred to one of the most prominent supercars that came out in the 2000s – the F430. This time, Ferrari wanted to create a car that would be recognised globally as a superior alternative to the Porsche 911 Turbo. Although the Italian car manufacturers have never stood out for their consistency, they managed to achieve their goal with the F430 and surpass all expectations. 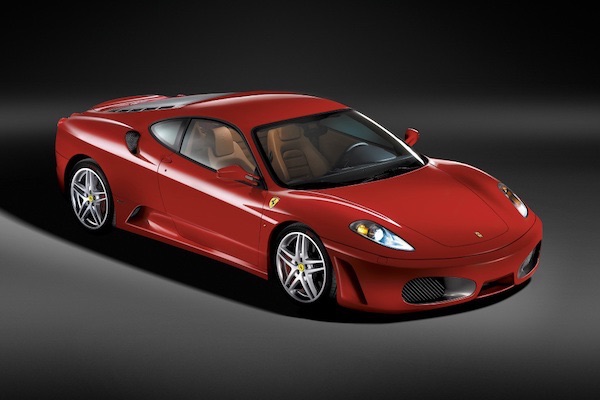 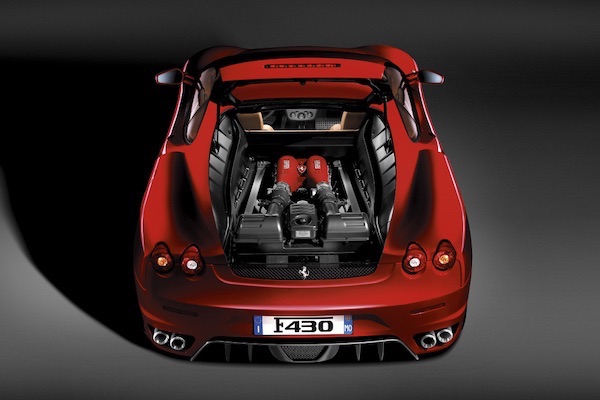 With the F430, Ferrari turned a completely new page in their history. For the first time, after 50 years, Ferrari introduced a brand new V8 engine that was earmarked for the F430 model from the very first days of its development. Even though the engine capacity grew to 4.3 litres, the components inside pistons, crankshaft, cylinder head, inlet and exhaust manifolds – were all brand new. The only thing that new engine had in common with previous models was the Ferrari name.

The new engine was accompanied by a much better interior and previously unseen technology. For example, an electronically controlled limited slip active differential which varied the distribution of torque based on several factors such as steering angle, driving trajectory, and lateral acceleration. Now, many modern cars are fitted with this technology, but back then it seemed like something out of this world. 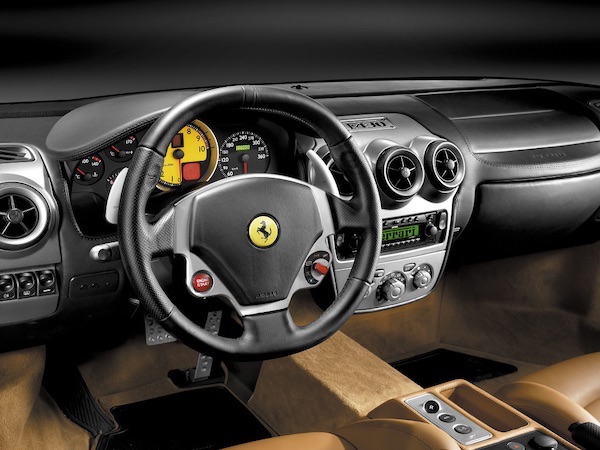 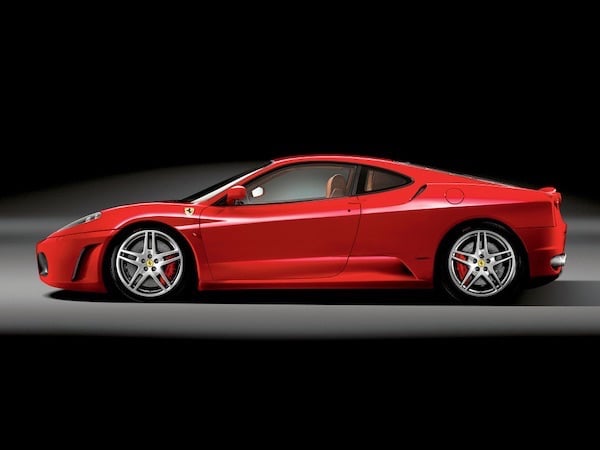 With the F430 model, Ferrari proved for the third time in a row that automotive design can bring you to your knees when combined with the latest technology and world-class engineering solutions. And the Ferrari F430 broke the marque’s sales record once again until it finally had to pass the baton to the Ferrari 458 – yet another successful model that managed to transform the supercar segment.