Up to and during the 1970s, the British Aston Martin was known as a manufacturer of fast and very luxurious coupés that even her Majesty's secret service agent 007 didn't turn down. However, James Bond and MI5 were not the most spendthrift clients, so the company was faced with financial difficulties and even teetered on the brink of bankruptcy. In order to salvage the situation, a decision was made that these days is common in this segment but which at the time was a completely innovative solution – production of a four-door luxury sedan. And this is how the Aston Martin Lagonda arrived into the world.

When speaking about this unique car, the history of its strange-sounding name cannot go without mention. No, it is not the name of some driver who brought the company renown on the racing circuit, nor is it an ancient Latin word. The Lagonda was an old British marque established back in 1906 which Aston Martin acquired in 1947. Most likely, the company's management decided that this sedan, with its unconventional lines, would be the best perpetuation of the name.

Speaking of unconventional lines, the car's design is, at the same time, a typical product of the 1970s, and a spaceship both then and now. Penned by designer William Towns, who worked on the Lagonda's look for an entire month, 12 hours a day, the wedge shape and folded-paper styling were in line with the angular car design trends of the time (with the most typical representatives being the Ford Granada or just about everything that came out of Detroit).

But the exterior was so unusual – especially compared to other cars of that time – that it immediately caused heated discussions that haven't stopped to this day. Some critics say that you have to buy Lagonda if thinking about a pencil box makes you want to get behind the wheel, and Bloomberg Businessweek named it as one of the 50 ugliest cars ever. However, design is a matter of taste, especially given that angular shapes come back into style about every other decade, as is happening at the moment.

Incidentally, it should be noted that the associative angular image that comes to mind when you hear the word "Lagonda" is not the first series, but rather the second, which was launched in 1976 (by the time the model was discontinued in 1990, a total of four series had been released). The very first Aston Martin Lagonda was essentially a four-door Aston Martin V8 that only found seven customers worldwide. 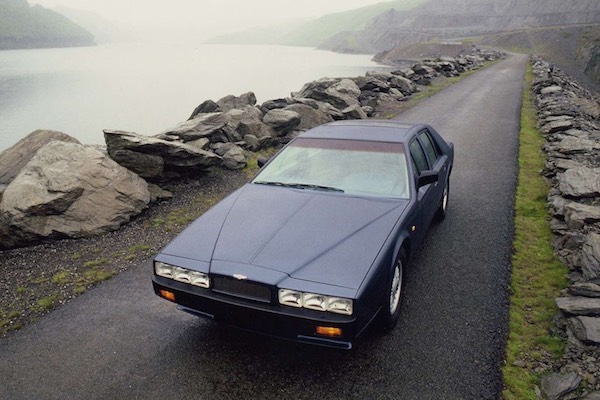 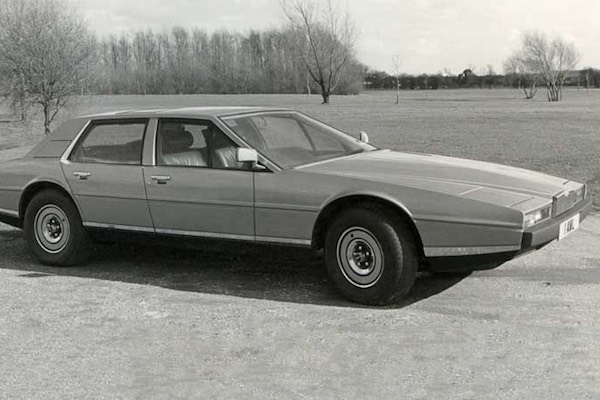 However, it was not the design that was the Lagonda's pride and joy. Its full beauty was hidden in the electronics. Just imagine – these days it's no big deal if your car calculates your average fuel consumption and displays it on a screen in digital format, but in those days this was like something from outer space. Literally.

In an era when man had already flown to the moon and computers were used for guiding ballistic missiles, even the most luxurious cars were still just a lot of metal, plastic and leather with basically no microchips at all. Aston Martin decided that this was the game to play – offering wealthy buyers an angular flying saucer that provided all of its data on a computer screen. According to the original idea that the company management and Lagonda designers had, the instrument panel was supposed to be one big screen that flickered with numbers related to vehicle operating parameters and trip data.

However, not everything turned out to be that easy. While the mechanical portion of the Lagonda was ready in just nine months, it took two years to force the electronics to work the way they had planned. The first thing they had to give up was the idea of one big screen. This was replaced by three smaller screens that used green light (in Series 2 models) to show speed, average speed, RPM, fuel levels and other data that is a must in order to reach the destination. 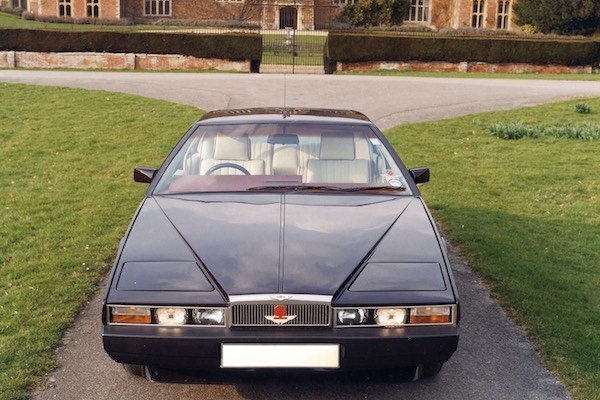 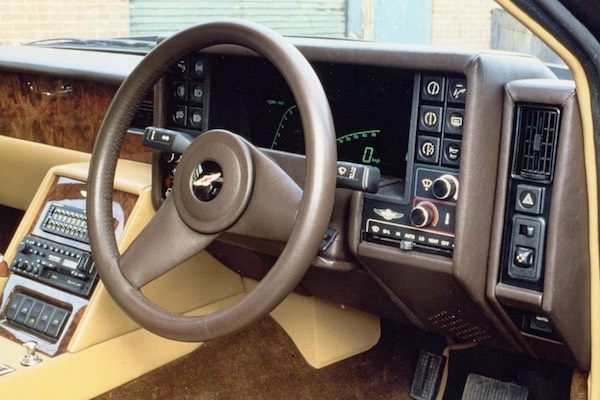 The achievements of the automotive industry were not yet enough to create what was then considered such perfect technology. In order to force the instruments to function the way they were meant to, Aston Martin first turned to a British university of science and technology that was knowledgeable in the area. But the specialists there couldn't figure out how to connect everything to one place. The Brits eventually had to ask for help from the New World. One company in Texas that was involved in the production of aircraft instruments finally agreed to inject some life into the Lagonda's dash.

Unfortunately, the injection was fairly conditional. The Lagonda went down in history not only for its – by some estimates – dreadful design, but also for the functionality of its instruments, which was more tragic than British weather. You never knew when the power seats were going to start fooling around and press the you to the steering wheel like something out of Stephen King's Christine, or when the headlights would start to pop up when you least needed them. That's how capricious artificial intelligence can be. And incidentally, it also eventually learned how to talk. In later Lagonda series, a voice synthesizer would tell you when to refuel, put on your seat belt or turn off the lights. And this synthesizer was a polyglot. The Lagonda could speak English, French, German and Arabic. At that time, sheikhs swimming in oil money could already afford such a luxury. Returning to the Lagonda's instruments, they did nevertheless merge into one screen in later generations of the model, and that screen started to be even more capricious that ever before. While Aston Martin's electronics were very, very far from perfection, the Lagonda still went down in automotive history as being the first car to have what is now commonplace – vehicle parameters shown on a computer screen. 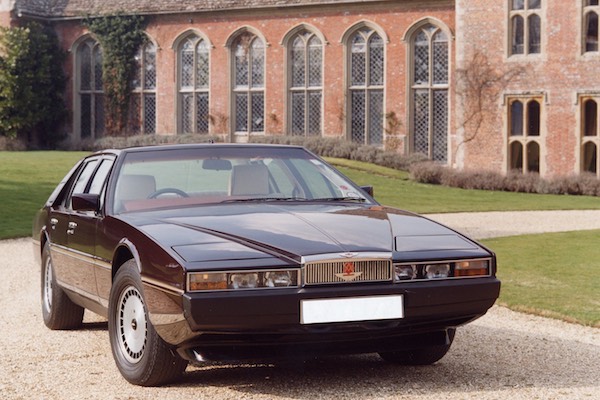 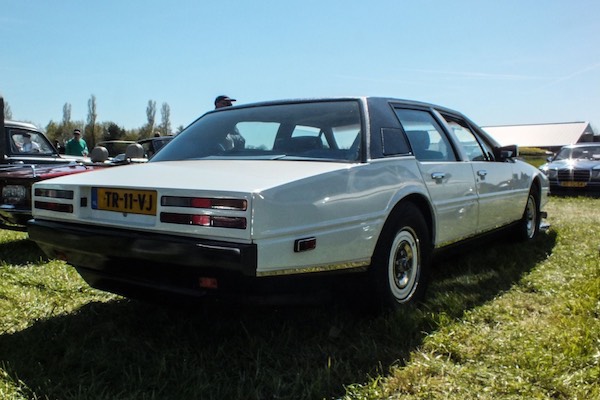 Everything modern except for the engine

However, that computer would stand in a room collecting dust if it didn't have an engine and all the other mechanisms that make it change its position in space. And in this respect, the Lagonda was a conservative Brit. While its electronics were something out of the future, the mechanical part went back to the 1960s. It had a 3-speed automatic transmission bought from Chrysler that didn't even have the usual hydro-transformer. However, even then it was able to adapt to driving style. While cruising along as if you were passing by Buckingham Palace, it switched to third as soon as it reached 25 kilometres per hour. And if the gearbox perceived that it had a fun drive with the pedal to the metal ahead of it, then it only switched to third after reaching 120 kilometres per hour.

The engine was also quite conservative. It was a V8, 5.3-litre unit that managed to get the Lagonda to a top speed of 230 km/h and accelerate to 100 km/h in 8.8 seconds. Honestly – not very impressive. And when the model just went into production, fuel was supplied to this engine through a carburettor. Fuel injection only appeared in the next series, which came out in the mid-1980s. Isn't it strange that this kind of ultramodern design and electronics were driven by such an archaism? Given, it was still a pretty nice drive. Even though it was designed to be a limousine to transport the passenger in comfort, the Lagonda actually drove quite well. According to people who have tried it, the person behind the wheel got, even more, driving pleasure than the passenger in back...

In its 14 years of production, the Aston Martin Lagonda never managed to become a standard attribute of luxury, like a Rolls-Royce or a Bentley. Only a very small number was made in total – 645 units. And they were all assembled by hand, with approximately one car manufactured per week. About one-third of all the Lagondas that were made were sold to the Middle East, and a quarter went to the United States and the United Kingdom.

Even though the Lagonda seems almost unobtainable due to the small number that was produced, you can still get your hands on one or two if you have the desire, the money, and a lot of luck. Stasys Brundza – Lithuania's most famous racing driver and collector – sold some of his car collection in 2015. The Lagonda that he had was shipped off to some foreign buyer who forked out 89,000 euros for the car. You could say that this is the market value for a Lagonda, but no one can actually pinpoint what the average price would be when so few were made. All the more so when this car – even with all of its criticism and rough spots – is also a part of global automotive history that not only saved Aston Martin from bankruptcy but also put computers in mass production vehicles.