Ford Mustang: The Best Ratio Between Price and Fun

Dodge Charger and Challenger, Chevrolet Camaro, Ford Mustang, and discontinued Chevrolet SS and Dodge Viper (RIP). These are cars reminiscent of the best period of the American automotive industry. Then, engineers decided to ignore the opinions of environmentalists and installed giant, earth-shaking engines in their cars.

The Ford Mustang has always been a symbol of American culture, but in Europe, it looks like a white crow - it has no analogues that could match its charisma. Most European cars are serious, stylish, and do not overstep any boundaries. It is not strange as Europeans like restraint, elegance and sophistication. But as you look at the Ford Mustang, 1970s rock music comes to mind, and there is a relentless urge to burnout. The fact that this car looks like a toy car is the biggest asset and the most charming attribute.

Ford does not hide the fact that engineers from Ford of Europe branch were called in to help develop the next-generation Mustang. They sought to create a car that appealed not only to Americans but also to Europeans. Although the shapes resemble previous Mustangs, the familiar bodywork hides a revolutionary design.

Engineers changed the position of the front and rear struts and installed a slopier roofline that improved the car's aerodynamics. Moreover, its wide “hips” conceal a 7 cm wider rear tread. Besides, this Mustang finally got rid of the springs that remind of the 1970s. Yes, it is a cheaper and more basic solution that Americans have not complained about. However, to please Europeans, the iconic car of the US industry must neatly make at least one turn. Now, in the rear suspension, we will find a Multi-Link configuration that we like best. 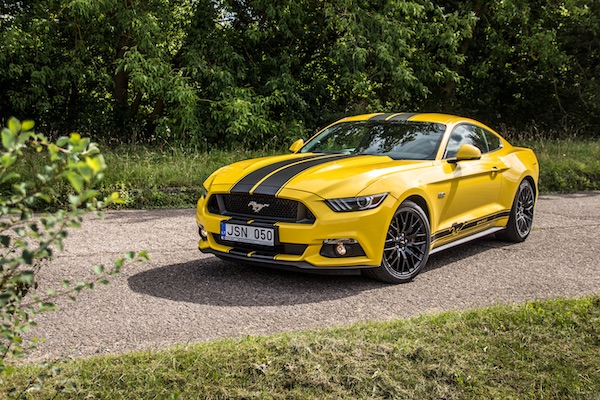 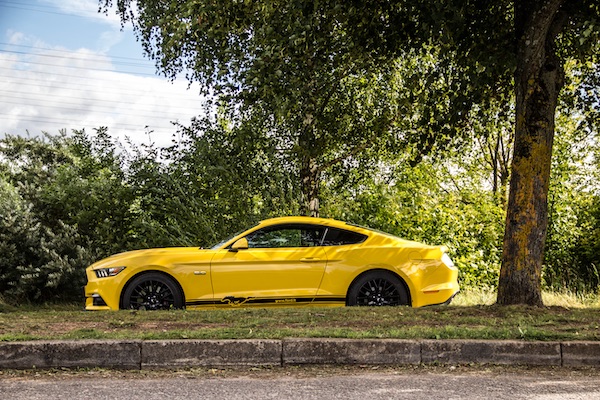 In Europe, the Ford Mustang is offered with one of two engines - a 2.3-litre, four-cylinder turbo that is currently also fitted to the Ford Focus RS, or with a 5.0-litre, 8-cylinder natural-aspirated engine. The car can be equipped with a 6-speed manual or 6-speed automatic gearbox.

Theoretically, the smaller Ecoboost engine should give the Mustangs an outstanding dynamic performance. The manufacturer ensures that this version accelerates to 100 km / h in about 6 seconds and burns around 8 l / 100 km of petrol. Still, we got into our hands (oh brother, how fun) the thunderous 8-cylinder engine. Ironically, it is in Europe that many buyers of the Ford Mustang opt for the 4-cylinder instead of the 8-cylinder. Damn those bureaucrats and environmentalists from the European Union! 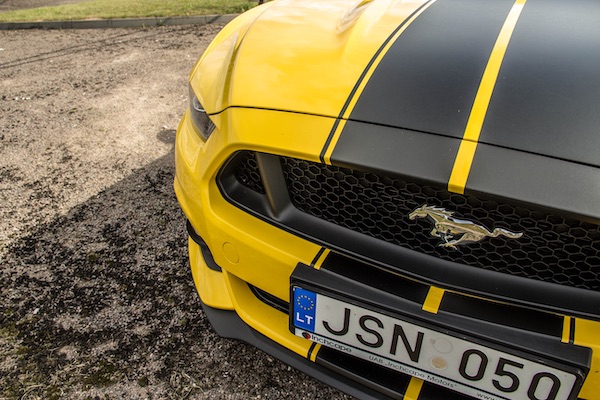 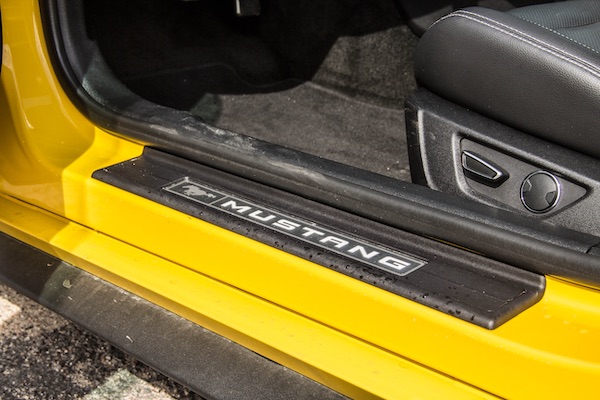 The Mustang is not a compact car - it is obvious when standing next to the vehicle and is felt when sitting inside. At first glance, the Mustang may only accommodate two adults. In part, that's the truth. The rear seats are either suitable for children, multiple items or tiny people. I highly doubt that people taller than 1.80 cm will sit comfortably there. Still, Ford technicians should be commended for their very comfortable and deep rear seats, not the animal train benches that usually find their way to other cars of this type.

Meanwhile, there is plenty of space in the front. The seats are wide and comfortable - just like a car brought to Europe from the United States is supposed to be. Sitting in the driver's seat, the chaos of buttons on the steering wheel is obscured, and the computer's control is somewhat complicated. The first minutes of trying to figure out how to control these devices are not the easiest.

It is worth mentioning the infotainment system, which is a few steps ahead of what we saw in the Ford Focus RS. Because the display is mounted at almost the same level as the gear lever, owners of longer fingers will be able to shift between all functions without having to pull their hand away from the gear lever. 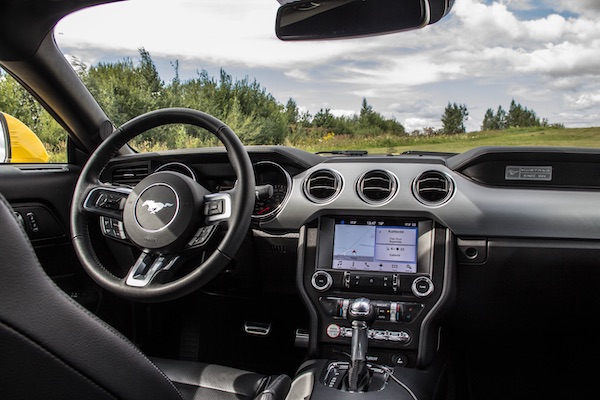 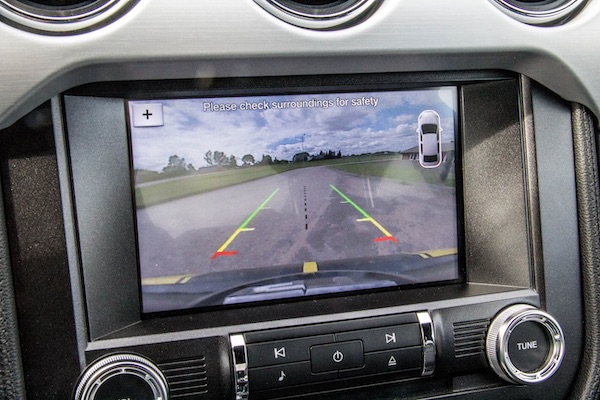 And what can you expect from a Ford Mustang when you point its nose toward a turn? If you're used to precise steering that reads your actions telepathically, you will be disappointed. Ford Mustang is not like that, and thank goodness because driving this giant is a completely different experience.

As long as you keep control of the car in your hands and do cross the line, the control of the Ford Mustang somewhat reminds of the sporty hatchback models of the last decade, when they weren't ideal but very enjoyable and charismatic. This is precisely what the Ford Mustang is. It will always act out you if you try to drive it as a tool for the race track. Instead, just let go of the reels and sometimes let the rear dictate your driving pace. However, you can choose another path. If you want to make a turn without drama, just press the brake pedal gently just before the corner and watch the Mustang behave like a domesticated wild horse. 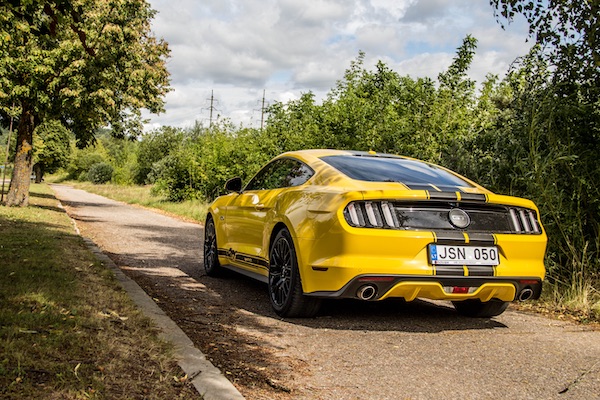 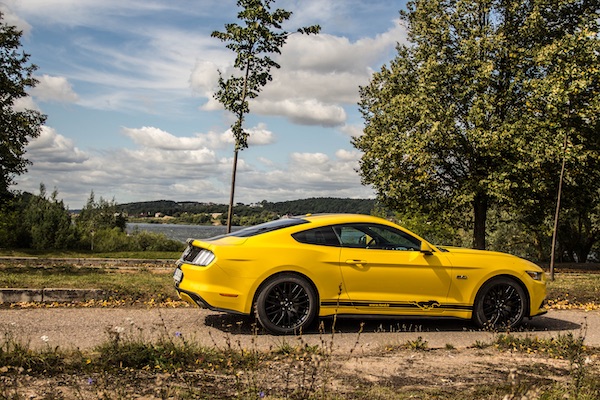 The 5-litre, 8-cylinder engine always strives to dominate and overshadow other features of the Ford Mustang. And it does it very well because every interaction with the accelerator ends with driver’s bloated and stupid smile on his face. The 421 bhp and 524 Nm torque engine that we tested was paired with an automatic gearbox. Not the perfect combination, but the 6-speed machine does its job well enough and always tries to shift to a lower gear quickly and efficiently.

If you decide to give up your gearbox command role and leave it alone, it will perform no worse than its European counterparts. Gears change quickly, with no extraneous noise and, most importantly, seamlessly. At a moderate pace, you will only hear the melody changing from the exhaust system.

And at this point, we return to the engine, which occasionally forms the image of a giant brick capable of hitting the car’s back. As a natural-aspirated motor, it instantly responds to the accelerator pedal and fires forward. How fast? The manufacturer claims the Mustang with this engine accelerates up to 100 km / h in 4.7 seconds and can reach 250 km / h maximum speed. Sounds good, doesn't it? But what’s most impressive is that this engine maintains a high pace throughout the rev range. You get the feeling that, before the tachometer arrow climbs up, the engine takes a deep breath and holds a giant explosive charge. Once you reach the 6500 rpm limit, the action sequence repeats and you continue the 8-cylinder engine show. 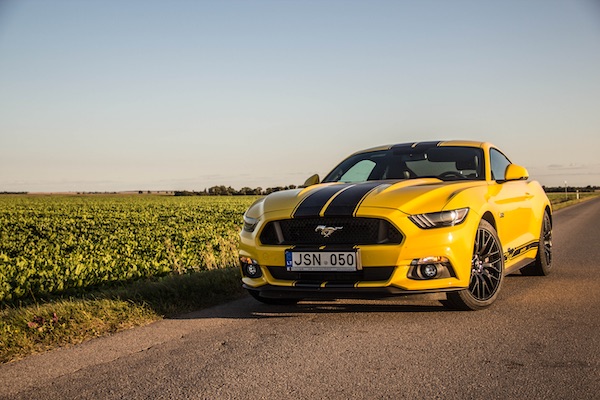 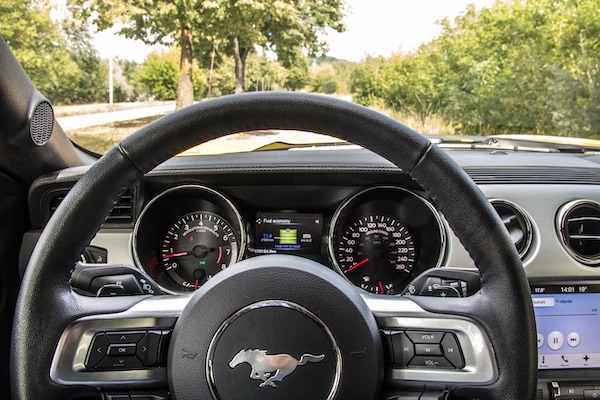 You can look at this car with contempt or fascination - there is simply no other way. The Ford Mustang has always been one of those cars that has been able to evoke emotions. Previous Mustangs radiated tremendous charisma but never met European standards. Now, with the introduction of the 6th generation, the situation has changed. The Ford Mustang is still radiant with charm and the character of American cars, but now it has everything a regular European could want - civilization and restraint on a cold Monday morning. 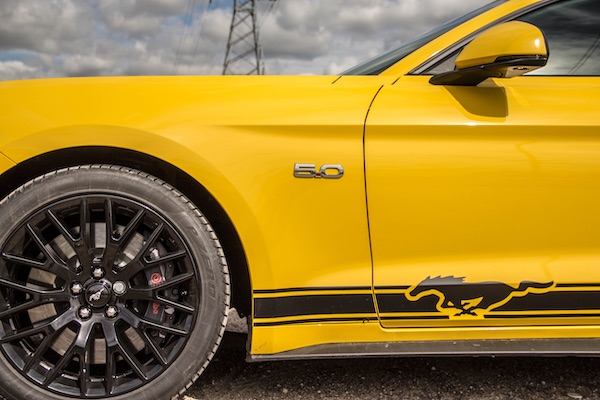 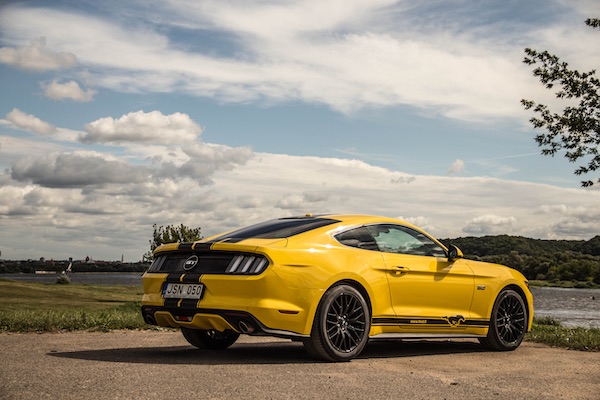 Mustang is not perfect, it has some annoying drawbacks, but they become absolutely irrelevant when you think about the capacity of the car and how much you pay for it. It will take almost twice as much to buy a European vehicle of similar power. But would it be twice as good? Definitely not.