This Week in Cars: The EV Has Effectively Killed The US Muscle Car, So Let’s Enjoy These Five American V8 Classic Cars In Its Memory

I don’t know about you, but when I read the news that Dodge will be killing off its classic American muscle cars - you know, big, V8-powered, working class heroes such as the Charger and Challenger - with EV models, I was saddened.

Celebrating the American muscle car: a blue-collar icon from the 1960s and ‘70s

Forgive me for rifling through the bookshelf and whipping the dictionary out, but for a long time, I’ve considered cars to be anachronistic; products of their time, which encapsulate a certain public spirit. If we’re getting all Guardianista about things, a zeitgeist if you will.

Ever since I’ve had an interest in cars, which is getting on for three decades now, I’ve been fascinated by the original American muscle car. Their heyday of the late 1960s to early 1970s sums up an era we’ll never return to. Not least in our lifetime.

The classic muscle car is from a period when cars were cheap, and petrol was even cheaper. These working class heroes were made for the average blue-collar worker who - after clocking off - wanted to get from Point A to Point B as quickly as possible with the throbbing wubwubwubwubwub soundtrack of a locally-made V8 in the background.

Yet come the mid-’70s with the global oil crisis and the emergence of smaller, more fuel efficient cars from Japan and Europe such as the Honda Civic and the VW Rabbit (or Golf, if you’re European) effectively rang the death knell for the classic muscle car in the USA.

Cars such as the Dodge Challenger and Charger I already mentioned, along with similar big V8s such as the Plymouth Barracuda and Chevrolet Chevelle were consigned to the US car industry’s history book overnight. Almost immediately, these much-loved names had become too thirsty, too big, and too brash in an automotive world which was looking to downsize.

From the mid-2000s until now, the American muscle car enjoyed a resurgence in popularity. US carmakers such as Dodge, Ford, and Chevrolet revived their iconic American muscle car names from the late ‘60s and ‘70s and fitted them with big V8s. What’s more, none of them were particularly expensive. In the UK, you can pick up a Ford Mustang GT500 for the price of a European hot hatch.

Yet come the turn of the 2020s, the V8-powered American muscle car is facing extinction once again. The automotive scene is shifting towards the EV and that’s fine. We’re fans of the EV at Dyler. After all, what Dodge plans to do with its new all-electric muscle car of the future is - once again - an anachronism of our times.

Here’s the catch though. Unlike the classic muscle car, EVs are not exactly affordable. Neither are they particularly simple to fix, which was also a large part of the appeal of the original Detroit and Dearborn icons.

Don’t get me wrong, though. I’m very much looking forward to what Dodge does with its EV muscle car of the future. I have no doubt that it’ll be a tyre-smoking, quarter mile devouring hoot to drive.

However, I still can’t shake the feeling that without that snarling V8 soundtrack, slightly ropey build quality and blue collar hero status, Dodge - a maker of some of the greatest American muscle cars of all time - will slightly miss the point of what made it great in the first place.

That’s a shame. That’s also why this latest edition of This Week in Cars is all about the V8-powered heroes that have made muscle cars cult figures over the last six decades. 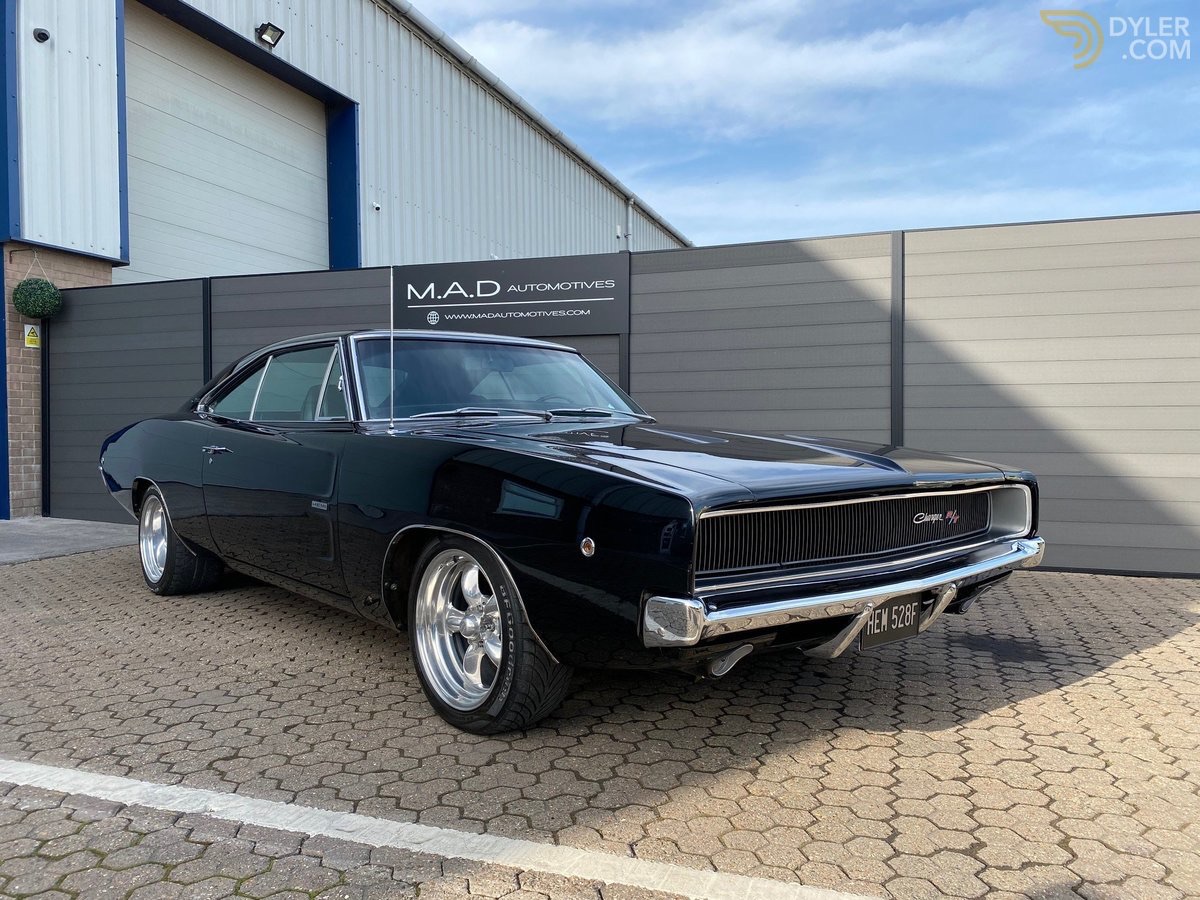 Villainous, aggressive, and the arch rival to the Ford Mustang, the Dodge Charger was - and still is - the bad boy’s choice of classic muscle car
© MAD Automotives

The 1968 Dodge Charger is widely considered by the classic American car scene to be peak Charger. Mostly recognised for its role as the villain’s car in the Steve McQueen classic, Bullitt, the Charger underwent a full redesign for the 1968 model year. It retained the mean, angry looking, full-width hidden headlight grill as found on its predecessor. However, the previous car’s fastback design had been scrapped and replaced with a new, “Coke bottle” shape with a flying buttress to give the Charger a more aggressive, sporty appearance. 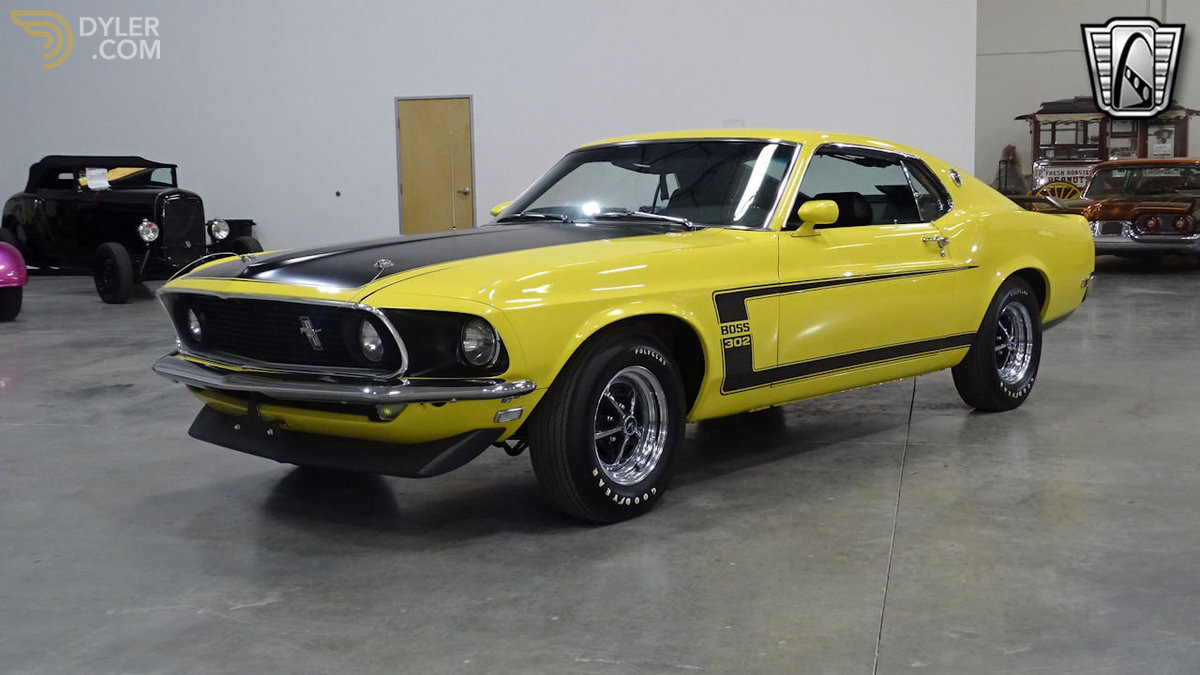 Scared by the success of the faster, smaller Camaro, Ford commissioned the Mustang 302 BOSS to ward off the threat from General Motors during the classic muscle car was of the late 1970s
© Gateway Classic Cars

The classic American muscle car’s heyday was marked by a rivalry between Ford and Chevrolet, or Mustang vs. Camaro. Come the end of the late 1960s, Ford top brass was concerned that its much-loved Mustang was about to lose out to the increasingly popular - and much quicker - Chevrolet Camaro. To counter the threat from GM, Ford decided to take the fight to Chevy on the race track by creating the 302 BOSS model as a homologation special to compete in the Trans-Am championship. The Boss 302 boasted a small block, lightweight 5.0-litre V8 which Ford put to competitive use in the Trans-Am and Australian Touring Car championships from 1969 to 1972. The BOSS Mustangs can be easily recognised with their chin spoilers, rear louvres, and iconic “hockey stick” sidestrip. The average price on the classic car market for a BOSS 302 is around $135,000, which makes this car a bargain. 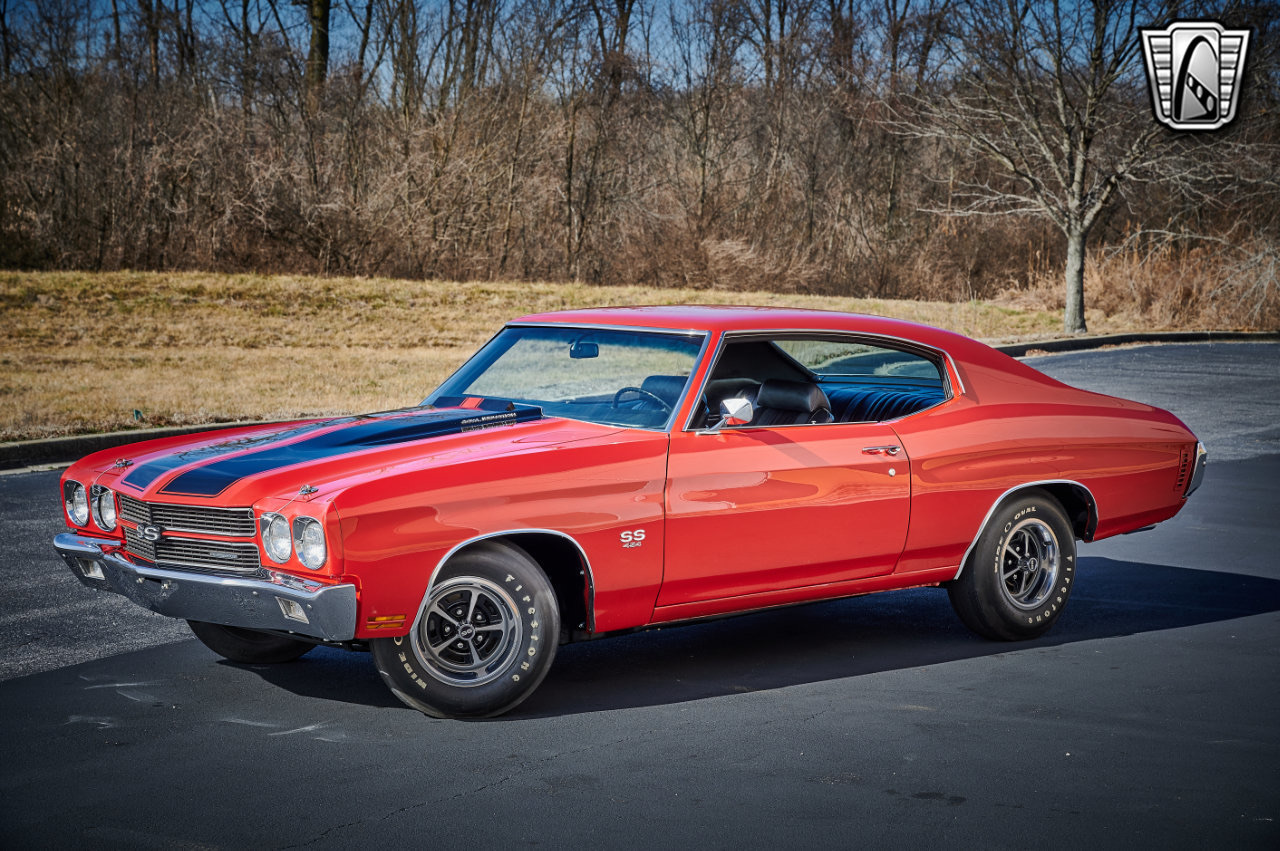 Produced from 1964 to 1978, the Chevrolet Chevelle is yet another instantly-recognisable classic American muscle car thanks to its “Coke bottle” design. The 1970 model - the one you see here - the most popular of the bunch. The SS model was powered by an “entry level”, 7.4L engine which produced 360bhp. Should this not have been enough, buyers of this Texan-made classic ccar could spec their Chevelle with a single four-barrel carburettor which boosted power to 450bhp. The Chevelle also bore the Chevrolet El Camino truck, which is also one of the coolest utility vehicles of all time. Unlike most of the cars on this list, Chevrolet chose not to revive the Chevelle name during the American muscle car renaissance of the last decade or so. 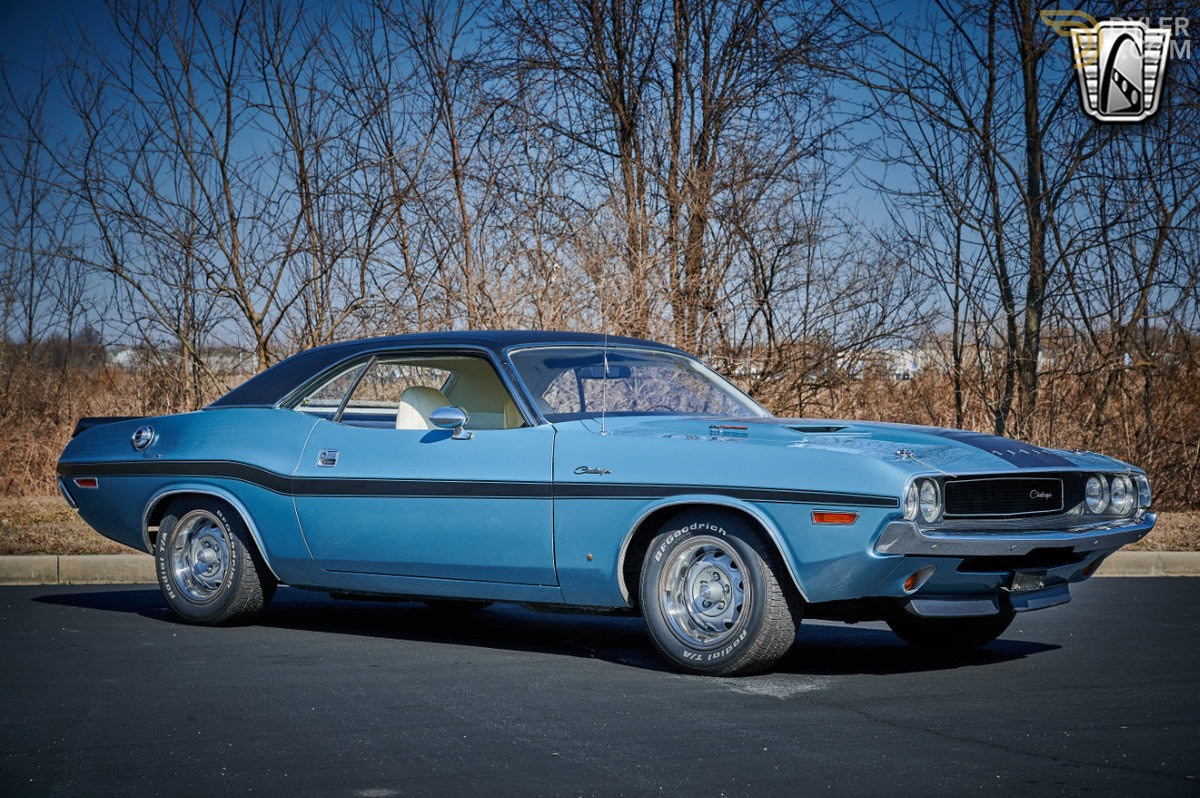 A legend within the muscle car and classic car worlds, the Dodge Challenger has been in production for over 50 years now
© Gateway Classic Cars

Originally introduced in 1970, the Dodge Challenger is one of the classic American muscle cars that is still being produced to this day, albeit it’s now in its third generation. The Carl Cameron-designed Challenger was launched to be ‘fast’ or ‘even faster’ with Dodge only offering two model types - the Challenger and the Challenger R/T which came available with a choice of V8 motors ranging from a ‘small’ 355bhp unit, to a 425bhp Hemi block. The Dodge Challenger was - and still is - a by-word for affordability in terms of a muscle car, which is part of its enduring appeal. What’s more, like its bigger brother - the Dodge Charger - and the Ford Mustang, it also has star appeal. An all white, slightly muddied Challenger, took centre stage in the 1971 cult classic, Vanishing Point. 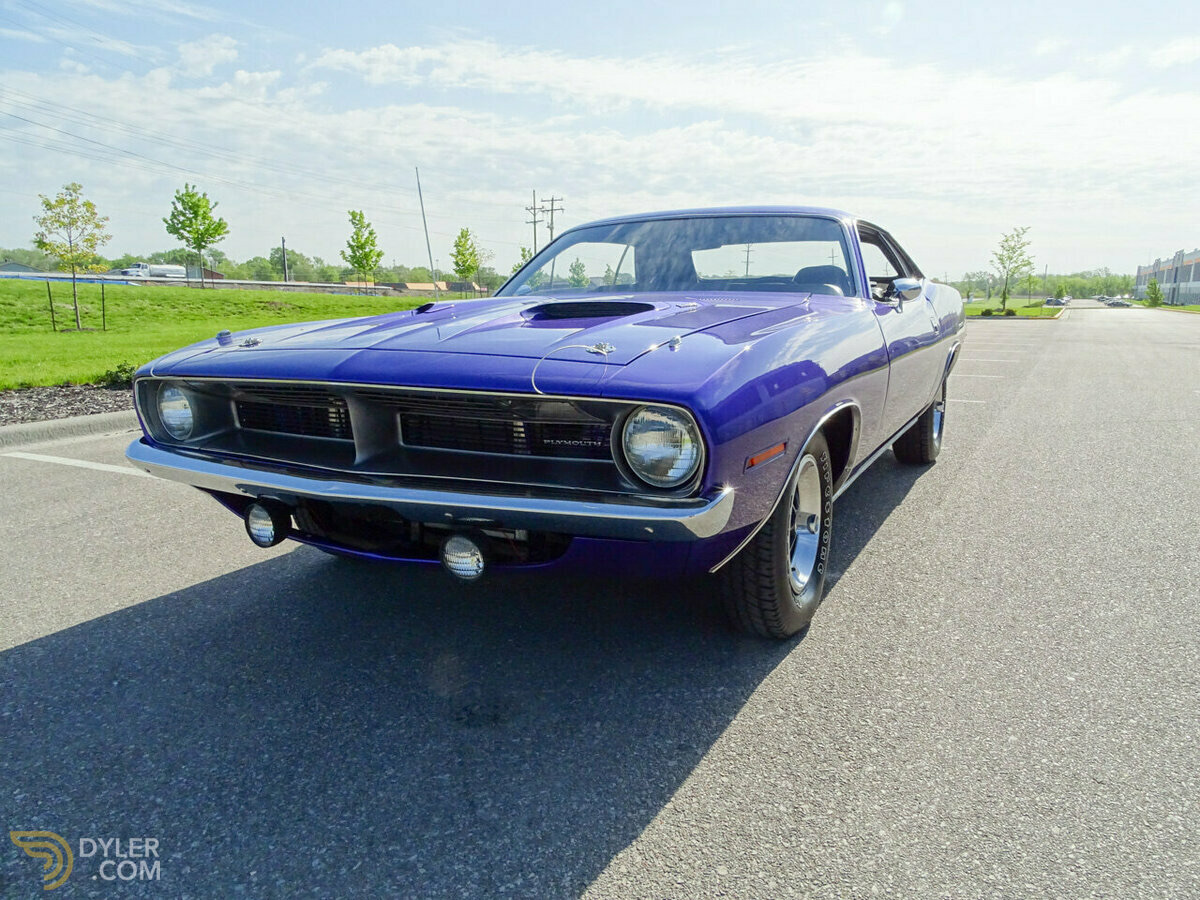 The Plymouth Barracuda was the stablemate to the Dodge Challenger we just looked at. Despite sharing the all-new, Chrysler-developed E-Platform which it shared with the Challenger, the Barracuda was created to be a budget, high-powered hot rod. Alongside two straight-six motors, Plymouth offered the Barracuda with a further six versions of the Chrysler V8 which it fitted to all of the muscle car brands it owned. The Barracuda was also hugely modifiable. Alongside the highly-tweakable engines and bonnet modifications, Plymouth offered Barracuda buyers a series of boldly-named colours such as “Sassy Grass”, “Vitamin C”, and “Moulin Rouge”.