If Steve McQueen was the King of Cool and Elvis Presley was the King of Rock’n’Roll, Art Fitzpatrick was the King of automotive illustrations. His artistic career took off immediately following WW2, after he was employed by Mercury to draw ads for their models. Art was a good artist, and he was soon headhunted by General Motors. He moved there together with Van Kaufman, his colleague and future long-time friend. Previously a cartoonist at Disney, Van was no less an artist than Art; besides this, his specialism was drawing people and landscapes, which meant that he and Art made a great duo.

Increasingly, they were swamped with orders and had to take on separate tasks: Art drew the cars and Van took care of the background. What Van drew though was something more than just a background. The environments he created were in no way less elaborate than the car drawings car and were sometimes even superior in terms of technique. We already mentioned that the duo had lots of work, as they produced not just ads but also model booklets - try to imagine what it takes to produce a 10 to 20 page booklet that is crammed with different views of the car in all kinds of environments, presentations of the color palette, the equipment, body varieties, and the interior options. 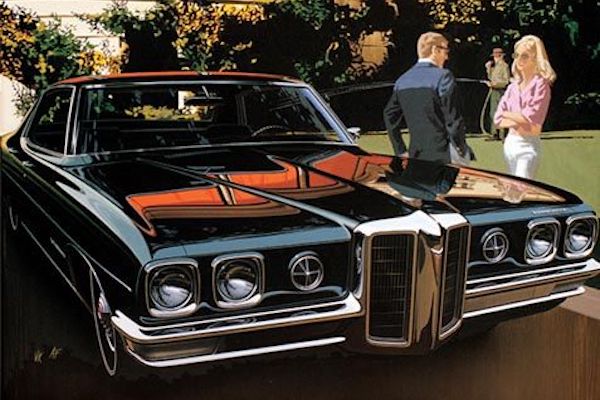 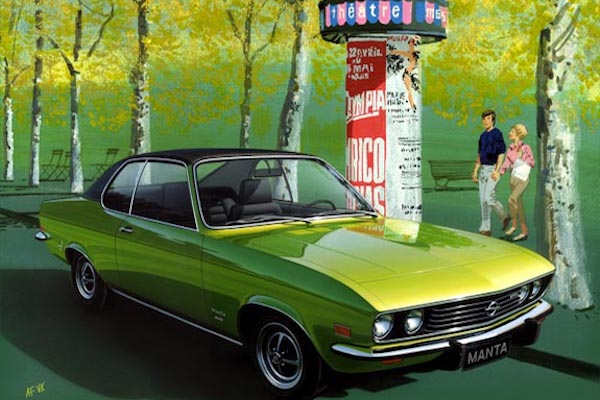 Initially, they worked on the Buick, but the Buick was already successful and GM soon gave the duo a more important mission - to lure crowds to GM dealerships in order to buy the new wide track Pontiacs. “Wide track” meant that all the models in the range had a 5in wider track (the car was made wider accordingly) amounting to 80in or 203cm (which was 5in wider than the modern S-Class Mercedes-Benz!). Unsurprisingly, the Pontiac Bonneville or Catalina models from this period had a 172cm wide rear seat (how wide is your sofa?) while the car itself could be as long as 5.6m - the American Dream at its best.

Still, the "wide track" buzzword wasn't enough. It all had to be visualized in the ads, so Van & Art sharpened their pencils and got to work. Their efforts resulted in an amazing hand-drawn ad series for the Pontiac wide track that spanned 12 years (1959 through 1971). It is now considered as one of the top car ad campaigns and features absolutely the best of hand-drawn ads. 285 Pontiac images were drawn in 12 years, each of which is an artistic creation in itself. "People want to see the car in places they wish to visit, instead of in their backyard," said Art placed different Pontiacs in the beautiful views of Paris, Nice, or Italy that were drawn by Van.

It's true that the cars appear unusually wide in these drawings. As we already mentioned, the core idea of the advertising was the "wide track", which had to be visualized by the buyers. As an artist, Art had the perfect justification, "It is not the car but my impression of the car that I draw." It was not so simple though. At that time, the Senate bureaucrats were on a crusade against any kind of artificial exaggeration in advertising, and they started twisting the arm of GM, and the GM Marketing Manager started pressuring Art in turn. Without losing his cool, Art made several photos from which he copied by hand the proportions of the car on a 1:1 scale. He also copied one of his drawings. All of these drawings were presented before the naysayers, who were not able to tell which one was copied from a drawing and not from a photo. That was the end of this investigation. Later, Art told one of his interviewers that the perspective he used in his drawings is roughly equivalent to those in pictures that are made with a 35mm lens (longer focal distance lens were usually used). 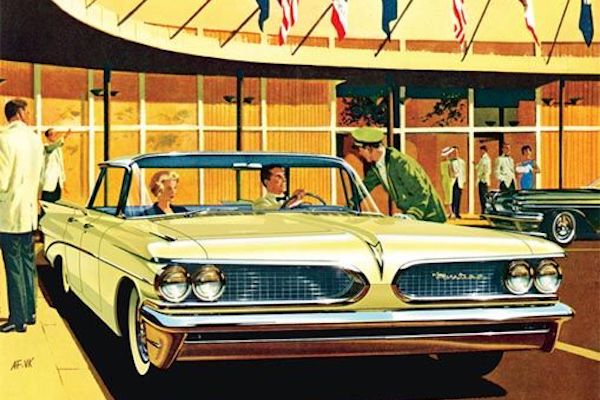 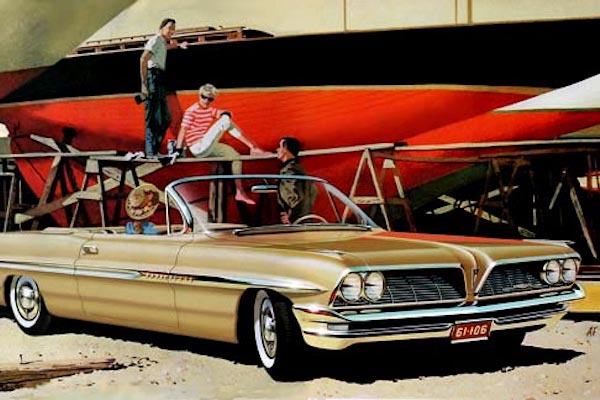 But sadly, nothing good lasts forever. In 1959, when the wide track was introduced, the hand-drawn ads were the only way to create high quality product promotions, as the photographic techniques in these days were not too advanced, to put it mildly. Still these techniques improved, and in five years’ time the managers of advertising agencies started knocking on the doors of car producers, offering photography as a considerably cheaper and faster, and in no way inferior, option. GM could not ignore the advance of progress, as the drawings were indeed more expensive and had a long production time. Initially, they used photography to promote cheaper models, leaving their expensive vehicles exclusively in the capable hands of Fitzpatrick and Kaufman. Nonetheless, they could not continue to amaze the public in the eighties, or it could have been a trend shift in advertising, but in any case the audience wanting something "more real". Thus, the hand-drawn Pontiac era ended in 1971. The two friends were not left empty-handed, as they were employed by Opel for several years.

Besides his great drawings, Art became an advisor to Pixar, the creator of the Cars movie, and released a series of postage stamps called America on the move at the end of his career. He worked until his death in 2015, leaving a legacy of more than 700 car drawings. His Pontiac wide track series is probably a must-see for all petrolheads.