The Week in Cars: Five JDM Classics That’ll Take You Back to Playing Gran Turismo on Your PlayStation

We don’t have much else to say apart from the fact that these five JDM classics for sale are some of the most important cars for those of us who grew up in the 1990s.

These are the cars that were the posterboys of the original Gran Turismo games. They’re the cars that helped form our automotive passions, and if you’re reading this, we’re sure that they represent something similar for you too.

These are the cars that we hurled around Table Mountain in all their pixelated glory in the hope that one day, we’d be able to drive one too.

These are the cars that you can now afford. Take a look below to find out what we mean… 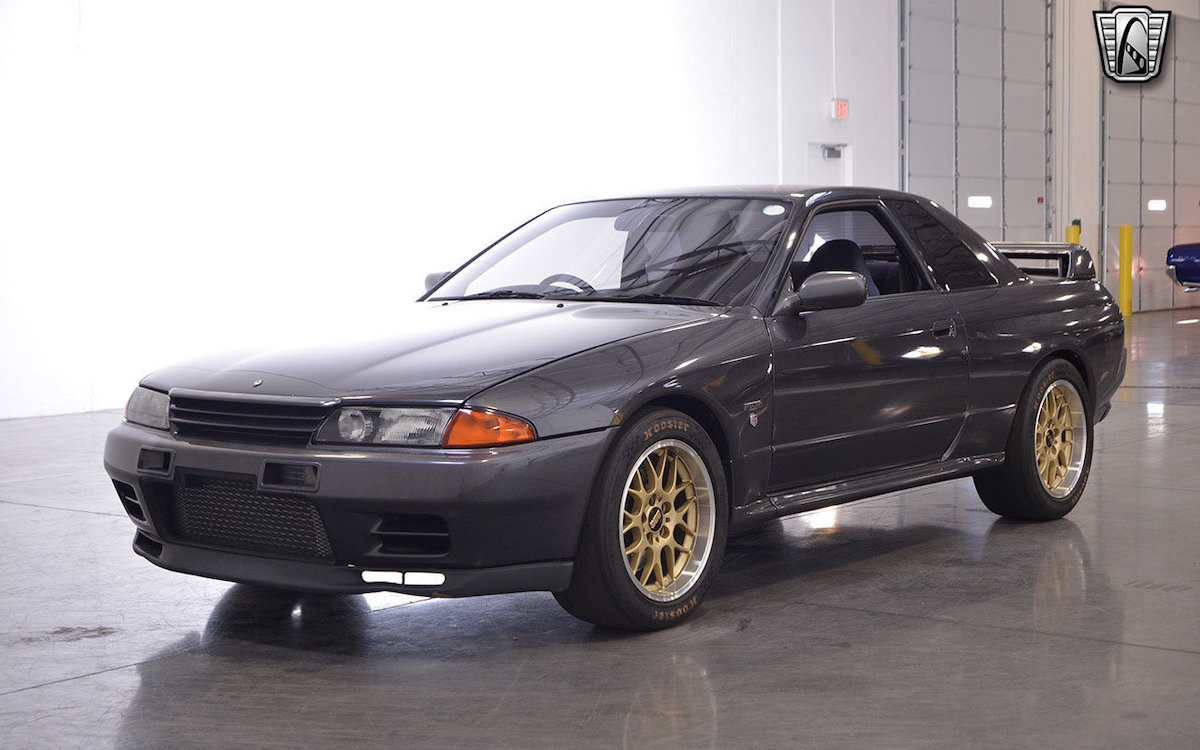 Nicknamed “Godzilla” for its monstrous power and technology, the Nissan Skyline GT-R R32 was one of the posterboys for the PlayStation Generation of car lovers. The Naganori Ito-designed R32 was unlike anything that had come before it. Under the hood of that streamlined, coupé body was a 2.6-litre twin-turbocharged inline six engine, which boasted a top speed of 156mph, and would launch the R32 from 0-62mph in 5.6 seconds. In terms of tech, the R32 put rival cars such as the BMW M3 E30 and Porsche 911 Turbo in the shade - its HICAS or High Capacity Actively Controlled Steering would turn all four wheels in the same direction, or in the opposite direction to boost low-speed grip and improve high-speed stability. The Advanced Total Traction Engineering System For All-Terrain With Torque Split, or simply put, ATTESA E-TS, gave the car unparalleled levels of grip across all different kinds of surfaces. The R32 is the grandaddy to the R33 and R34, a car which is considered to be Peak GT-R. It may be over 30 years old now and its interior may have a whiff of period Shiny Japanese Black Plastic, but none of this matters. None of this matters at all, because the R32 is still an epic driver’s car that altered the automotive landscape for the better.

PRICE:
64 500 USD
LINK TO CAR AND DEALER:
Gateway Classic Cars
USELESS CAR FACT:
The United States actually made the R32 illegal for a while. The US government’s Motor Vehicle Safety Compliance Act was designed to stop grey imports (non-US market cars) from Japan. The legislation halted the import of Japanese Domestic Market (JDM) cars under 25 years of age, so until 2014/2015, the R32 was technically illegal. The car still doesn’t meet many of the US’ emissions regulations, but the majority of states don’t really care apart from California. But you expected that, didn’t you? 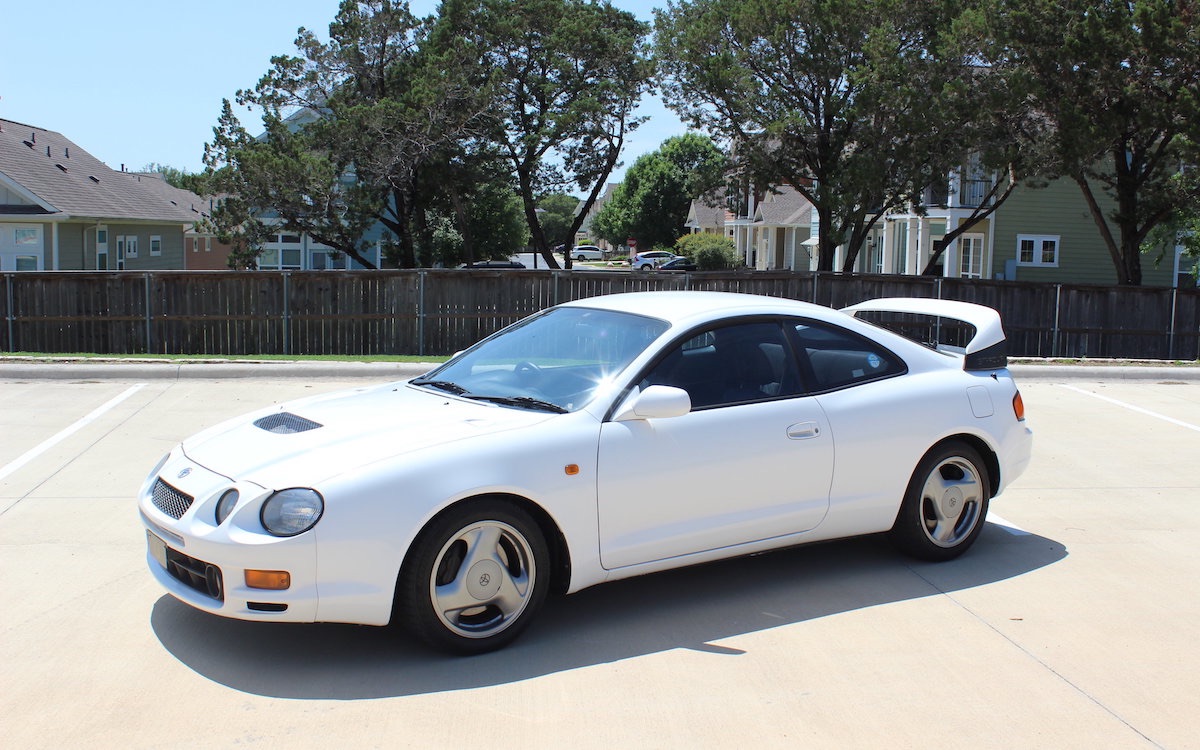 The Toyota Celica GT-Four WRC (ST205) is the car that got Toyota kicked out of the World Rally Championship in 1995 for cheating, but don’t let that deter you. The Celica GT-Four was designed by Toyota for one thing, and one thing only - to compete in the WRC. When it was introduced in 1994 to replace the multiple championship-winning ST185 which boasts one of the coolest motorsport liveries in history, the four-wheel-drive ST205 was the most powerful Celica ever made. The JDM version of the car boasted 252bhp, whilst European and Australian market cars were slightly less powerful with 239bhp under the hood. The WRC boasts a rally car-style anti-lag system, water spray bar for the twin-entry turbo, a small bonnet mounted spoiler and a ludicrous rear wing which remained until production ended in 1999. The period Subaru Impreza WRX STi and Mitsubishi Lancer Evo VI are often favoured over the ST205 for some reason, but the GT-Four WRC is a rarer bird, as only 2,500 were made. Don’t let Turbogate put you off of this JDM classic.

PRICE:
25 000 USD
LINK TO CAR AND DEALER:
Independent Vendor
USELESS CAR FACT:
Of the 2,500 GT-Four WRCs made, only five made it to New Zealand, and 77 made it to Australia where it was marketed as the Rallye. 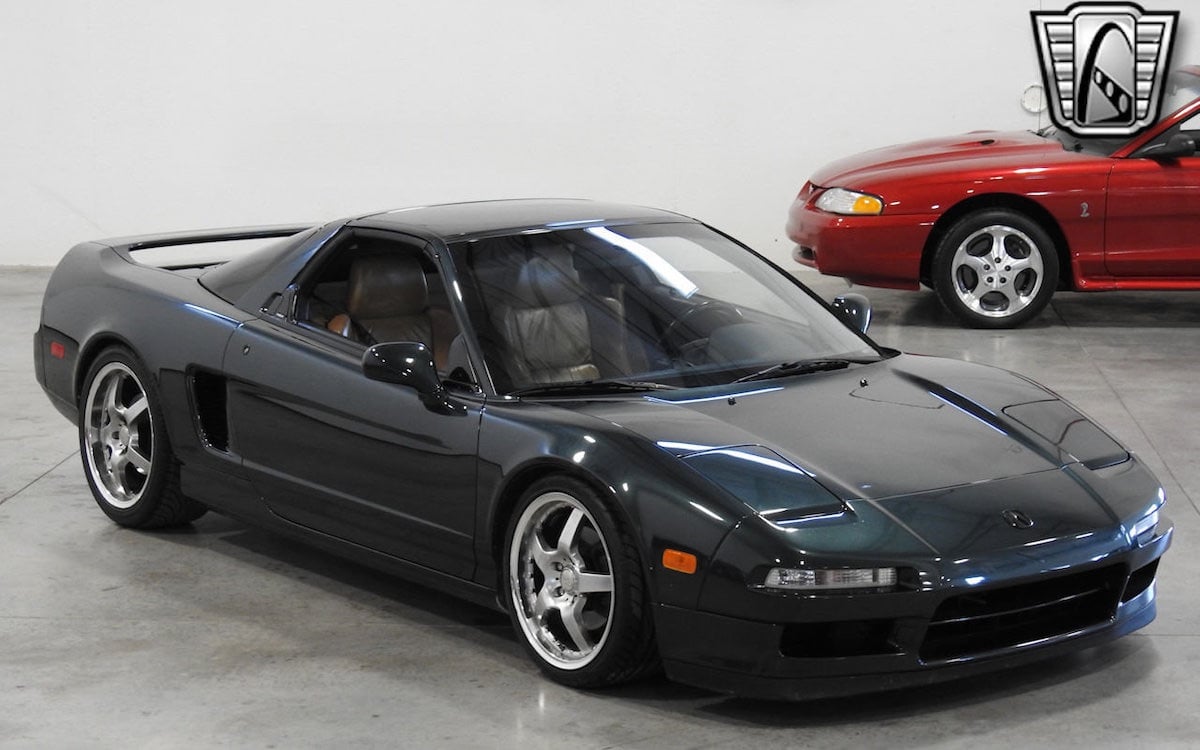 Something, something Ayrton Senna helped tune this car, but we’re not going to play Ayrton Senna Buzzword Bingo. with one of the most exciting machines to have left the Honda (or Acura, Honda’s luxury brand) factory. The NSX was designed with Ferrari in its sights and it showed. The driver was cocooned in a well-built, well-insulated leather cockpit which was inspired by the F16 fighter jet, and the all-aluminium NSX was pushed along by its party piece - Honda’s mid-mounted 3.0-litre V6 VTEC motor. Whilst the NSX was more than capable of matching similar Ferraris and Porsches in the handling and performance stakes, it was remarkable in that it was the supercar you could use every day thanks to its unparalleled refinement and comfort. Whilst popping to the shops for a pint of milk would have been a particularly uncomfortable ordeal in a period Ferrari, Porsche, or Lamborghini, it was no more difficult in the NSX than it would have been in a 1.6 Civic. Parking may have been a small issue though, as the NSX is a thing of considerable length, but don’t let that put you off. This car is an all-time favourite of ours because it’s a thoughtful sports car for thoughtful people. Pre-facelift models also have pop-up headlights, and pop-up headlights are cool.

PRICE:
52 500 USD
LINK TO CAR AND DEALER:
Gateway Classic Cars
USELESS CAR FACT:
The NSX was made on the same production line as the wonderful little Honda Insight at Honda’s Tochigi factory. This is because both cars were made of aluminium and it made manufacturing easier. The Insight also has the same steering wheel from later NSXes. 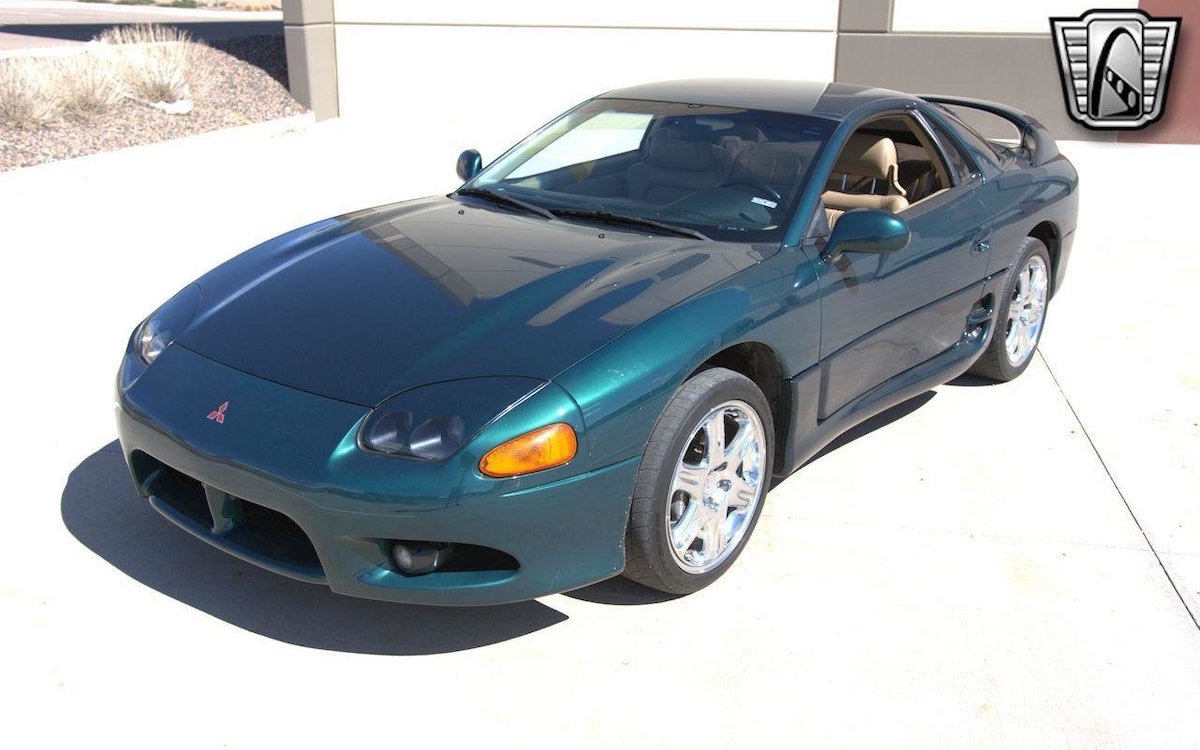 For most Gran Turismo fans, the Mitsubishi 3000GT VR4 (or GTO for non-US markets) was the best entry-level car you could buy on the game. However, the VR-4 was anything but an entry level machine. Conceived at the height of Japan’s economic boom in the late 1980s, it represented a serious case of “the sky’s the limit” when it was launched in 1990. Mitsubishi threw EVERYTHING they had at this car, and it showed. The 3000GT VR4 was powered by Mitsubishi’s punchy twin-turbo V6, motor, which made it faster than a Ferrari 348. It had four-wheel steering, an active exhaust which could be made louder at the touch of a button, active suspension, and most astonishingly, active aerodynamics which came into effect to stabilise the car at high speeds. Again, remember this was in 1990 - most of this tech didn’t become mainstream until around a decade ago. Along with the Mercedes S-Class W140, the 3000GT VR4 can easily lay claim to being one of the most forward-thinking cars of the 1990s and possibly of all-time. That’s high praise. That’s very high praise indeed.

PRICE:
25 500 USD
LINK TO CAR AND DEALER:
Gateway Classic Cars
USELESS CAR FACT:
The 3000GT was also sold from 1991 to 1999 as the Dodge Stealth as a result of a collaborative effort with Mitsubishi. 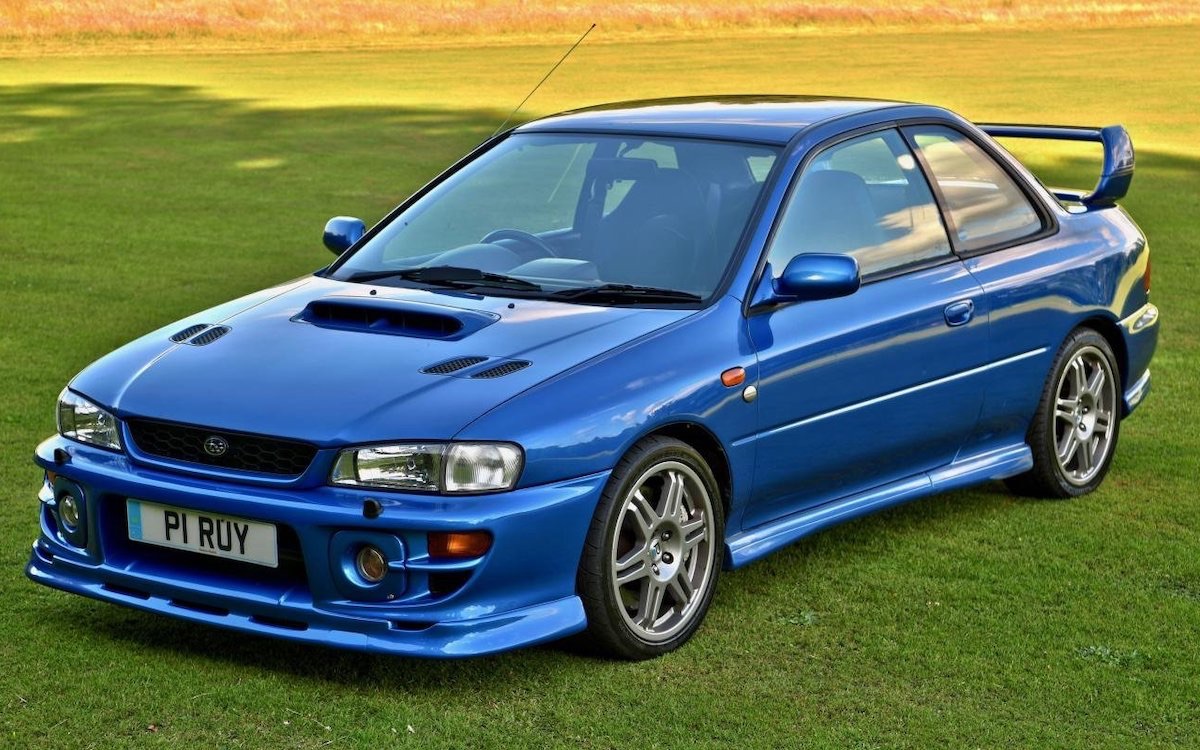 No JDM car list would be complete without an Impreza, especially a pre-bug eye model in Sonic Blue. The P1 was introduced to the UK market as a way of beating the influx of those pesky grey imports that were coming thick and fast as a result of the car’s popularity, which was sent stratospheric by a certain Colin McRae. The P1 was developed by Prodrive, the company responsible for the preparation of the Subaru Impreza WRC. They took a standard Impreza Type R and developed a bespoke suspension which would make the ride more attuned to UK roads. The UK’s only “official” two door Subaru Impreza also got newly-designed wheels, and all-new front-and-rear spoilers. Unlike imported cars, it had ABS as standard. Prodrive also tweaked the car’s 2.0-litre turbocharged engine to up the power to 280bhp and reduce the 0-62mph time from 6.3 to 4.8 seconds. The P1 is already a very special car that can trace its lineage directly back to the dusty and punishing tracks of the WRC. The fact that only 1,000 were made makes it even more desirable to own and drive.

PRICE:
27 500 GBP
LINK TO CAR AND DEALER:
Vintage & Prestige
USELESS CAR FACT:
The Subaru Impreza’s wheels and spoilers were designed by Peter Stevens, the man who would go on to design the McLaren P1 hypercar.


These cars were also listed in this week’s edition of the Dyler.com newsletter, which you can register for by clicking this link.