Carroll Shelby’s $2.5m Toyota 2000 GT And 10 More Of The Most Expensive JDM Cars Ever Sold At Auction 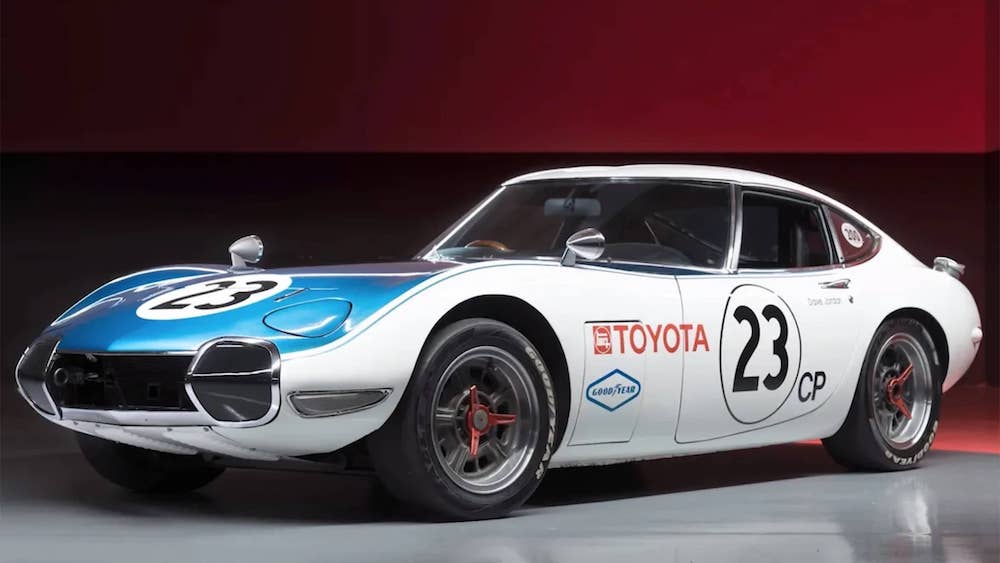 For some reason, Japanese cars seldom reach the big bucks of their European and American counterparts at auctions. However, that doesn’t mean that there haven't been some wildly expensive JDM cars to go under the hammer over the last decade or so. Given a renewed interest in classic and modern classic Japanese cars amongst enthusiasts in recent years, here is a list of 11 of the most expensive JDM cars to have ever been sold at various auctions across the world. There’s a lot of Toyotas here, so you can rejoice if you’re a Toyota fan. Just be aware that they all come with a very hefty price tag… 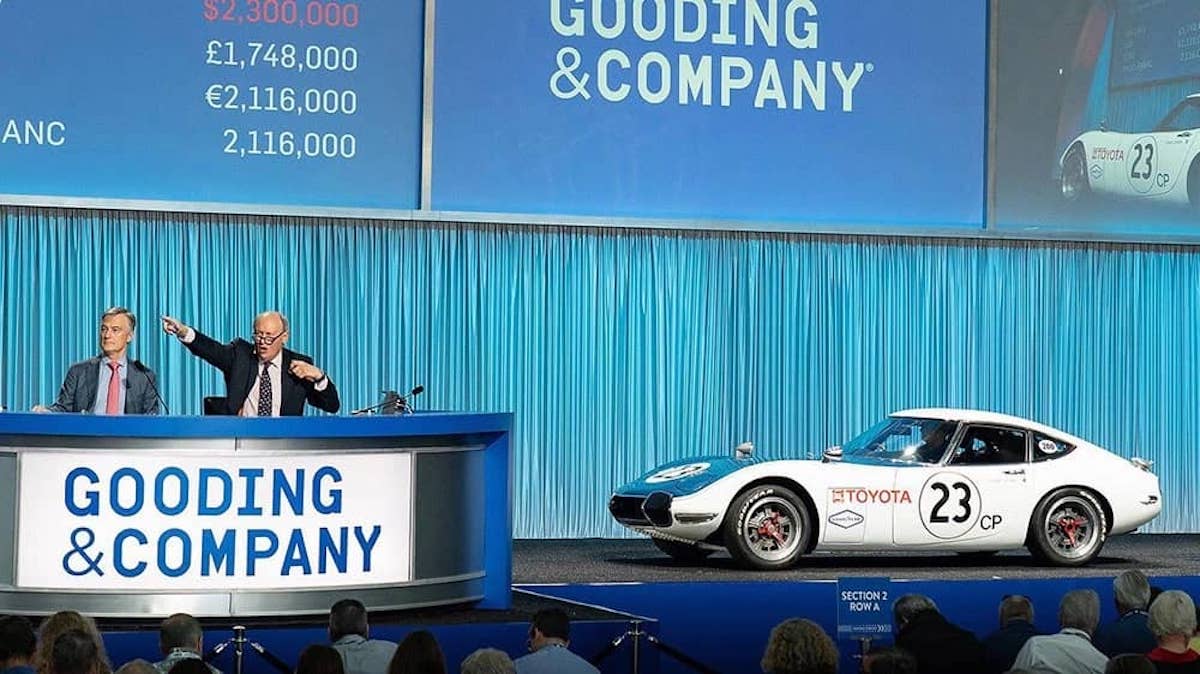 There are plenty of Toyotas on this list, and it’s a Toyota that can lay claim to being the most expensive JDM car ever sold. In March 2022, this 1967 Carroll Shelby-tuned Toyota 2000 GT sold for a huge $2,540,000 at the Gooding & Company’s Amelia Island Auction, beating the existing price record by $400,000! The Satoru Nozaki-designed coupé is a rare car as is, with just 351 examples built during its production run. However, the Shelby Toyota 2000 GT has an extra dose of exclusivity thanks to being just one of three, and boasting a tuned version of the standard car’s six-cylinder 2.0L 138 bhp engine, a lowered suspension, and a rad 1960s racing livery. 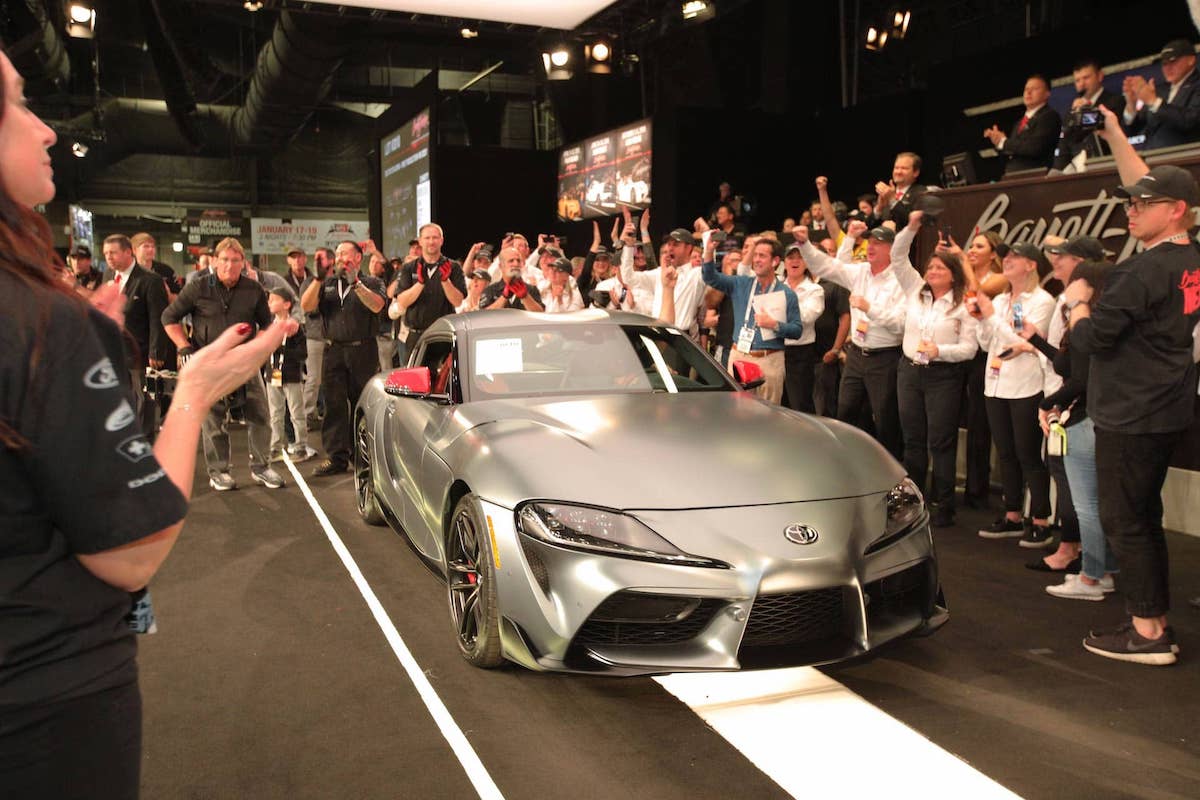 With a one-off paint job and a signature by Toyota’s CEO, the world’s first ever fifth-gen Toyota Supra held the title for the most expensive Japanese car ever sold at auction until 2022
© Toyota UK Media

Back in 2019, Toyota revived its iconic Supra nameplate after an absence of almost 20 years. The world’s first ever production model of the fifth-generation Supra (that’s the car you see above) was signed by Toyota CEO Akio Toyoda and finished in a one-off matt grey with a red interior and red wing mirrors. Naturally, this wasn’t going to have a modest price tag at the Barrett-Jackson annual auction in Scottsdale, Arizona in 2019 - after all, the car started at $100,000. However, nobody expected it to reach its final asking price of $2.1m. 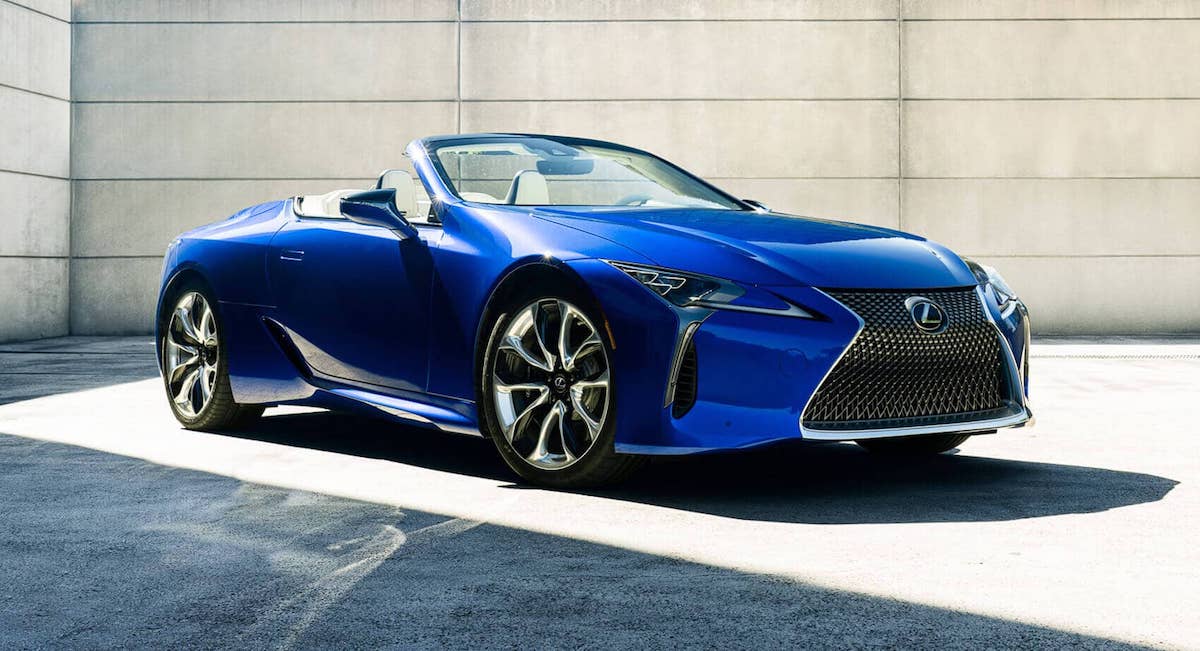 With a price of a not insignificant $2m, this Lexus LC500 is big, wafty, and very expensive
© Lexus Newsroom

The following year at the 2020 Barratt-Jackson auction, the second-most expensive JDM car of all time was sold. In just three minutes, the first production 2021 Lexus LC500 went under the hammer for $2,000,000. The car was finished in Lexus’ Structural Blue paint - the deepest blue of any car currently on sale - with a white leather interior. Included with their six-figure purchase was a set of Zero Halliburton luggage designed specifically to fit in the trunk of the V8-powered Japanese Mercedes SL, a photo album depicting the LC’s production cycle, and driving lessons hosted by US race driver Scott Pruett. 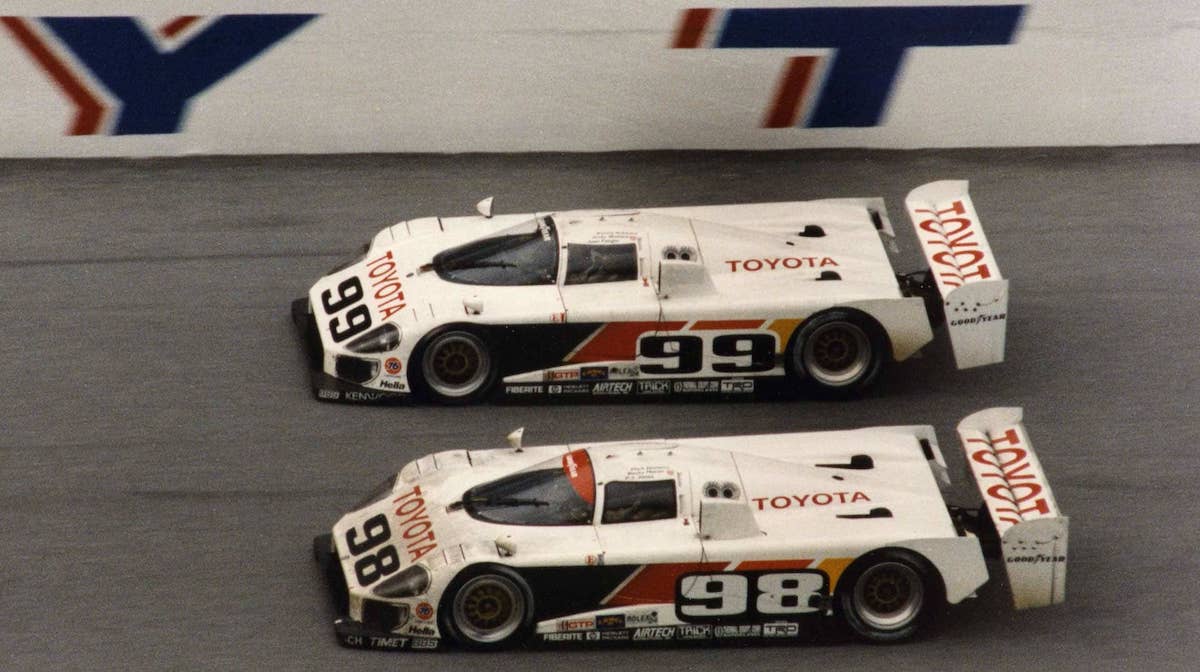 Capable of producing over 3,000kg of downforce and over 750bhp from its turbocharged four banger, the Toyota Eagle MKIII GTP was another of Toyota’s motorsport success stories… sort of…
© IMSA.com

Another Toyota, but not really a Toyota. The Toyota Eagle MKIII GTP was the work of Dan Gurney’s AAR or “All American Racers”; an IMSA GTP with Toyota branding and the Japanese carmaker’s very small but immensely strong turbocharged 2.1L four-cylinder engine which - get ready for this! - churned out over 750bhp in a car weighing just 875kg. What’s more, legend has it that the engine was so powerful, that it destroyed four dynamometers belonging to Toyota Racing Development (TRD, now Gazoo Racing) during testing! The car was a masterpiece, and won 21 of the 27 races it entered during the 1992 and IMSA season. To underline how impressive the Toyota Eagle MKIII GTP was, at speeds of over 300k/h (186mph) it produced more than 3,000kg of downforce. 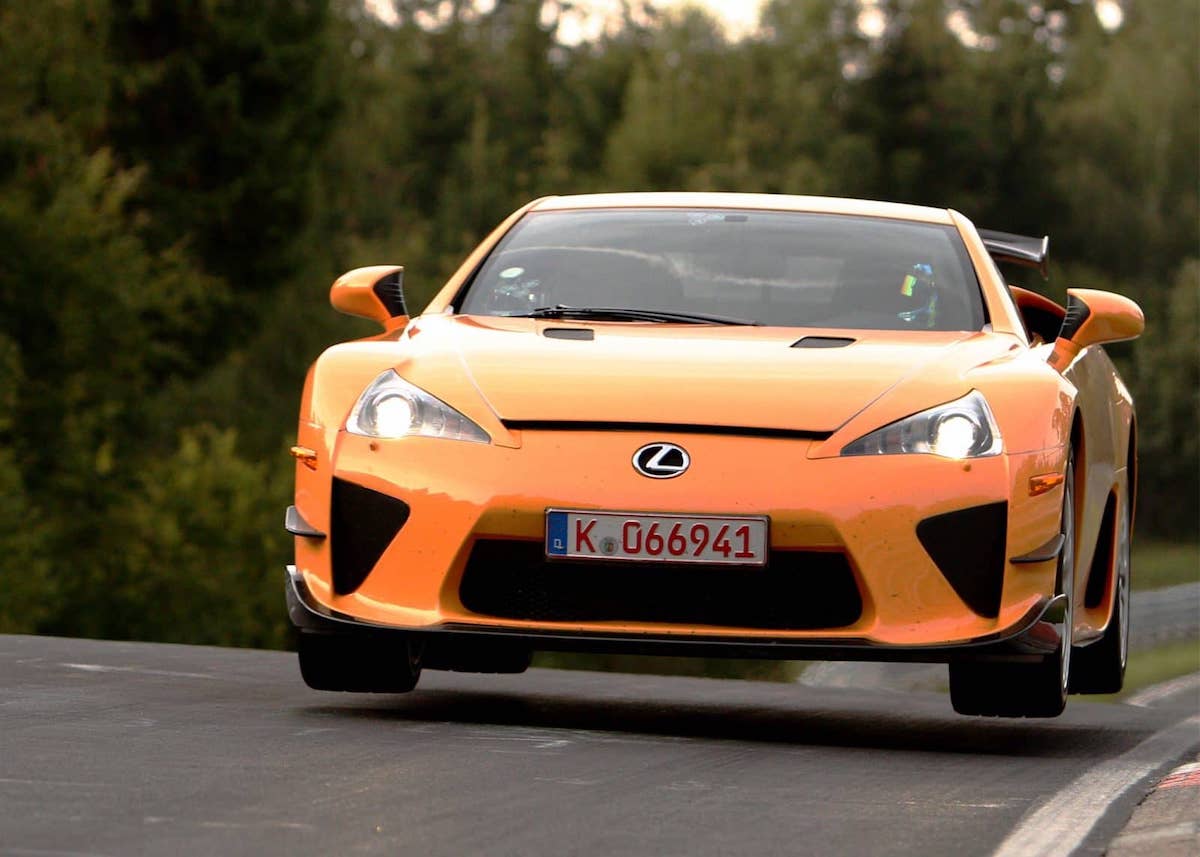 Lexus made the mighty LFA even mightier with the $918,000 LFA Nürburgring Edition
© Lexus Newsroom

The 4.8L, 562bhp V10 powering the Lexus LFA is widely considered to be one of the greatest engines ever made and so it should be - it sounds glorious. Yet again at the 2019 Barrett-Jackson auction, one of the 50 LFA Nürburgring editions produced with just 885 miles on the clock sold for $918,500. To provide some further background as to just how epic this iteration of the already-epic LFA is, its engine was capable of revving from 0-to-9000 rpm in 0.6 seconds, and Toyota had to develop a digital tachymeter to keep up with the V10 revving from idle. Oh, and if you were wondering, the Lexus LFA Nürburgring Edition managed to get around the Nordschleife in 7m14.640s with an average speed of 106 mph. 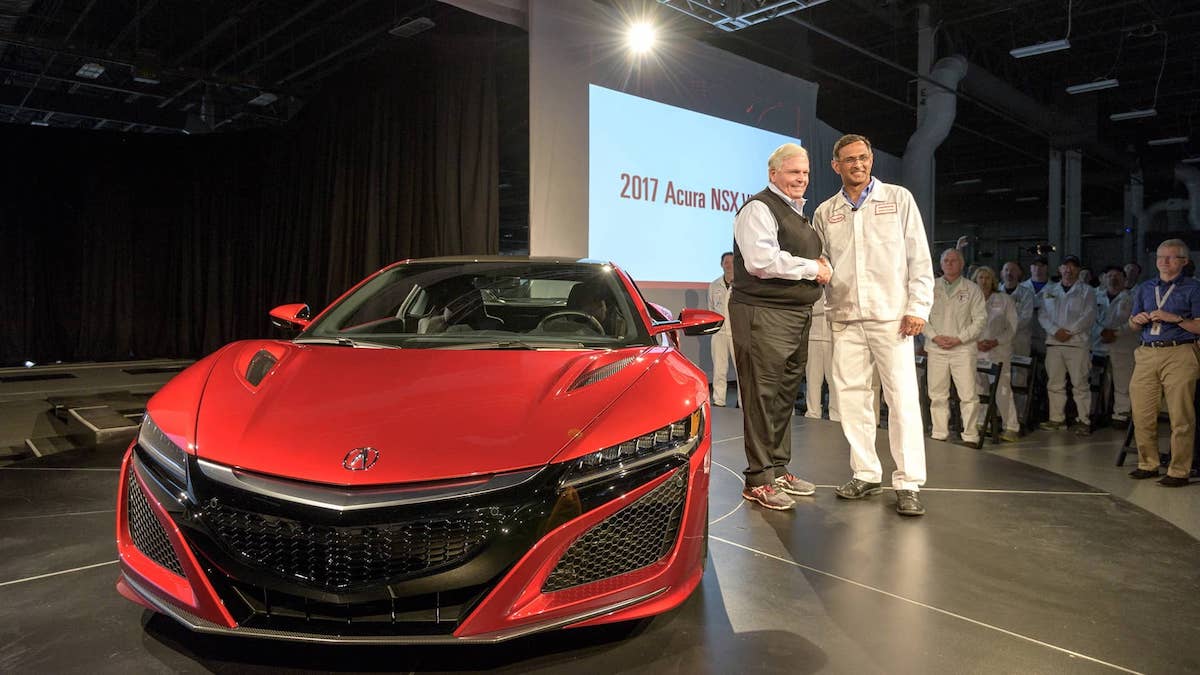 The first ever production version of the latest Honda NSX was purchased by Rick Hendrick for $1.2m
© MotorAuthority.com

After a hiatus of 12 years, Honda - or Acura if you’re in the USA - reintroduced the NSX for the 2017 model as an all-wheel-drive, mild hybrid sports car. Its 3.5L V6 was mated to a hybrid electric drivetrain, which produced 573bhp; almost double that of the original NSX of the late 1980s. Once more at the Barrett-Jackson auction - this time in 2016 - the first-ever production Acura NSX was purchased for $1,200,000 by Rick Hendrick, the owner of the Hendrick Automotive Group of car Hendrick Motorsports - the most successful NASCAR team in the history of the sport. Like every Japanese car sold at Barrett-Jackson on this list, the proceeds went to charity. 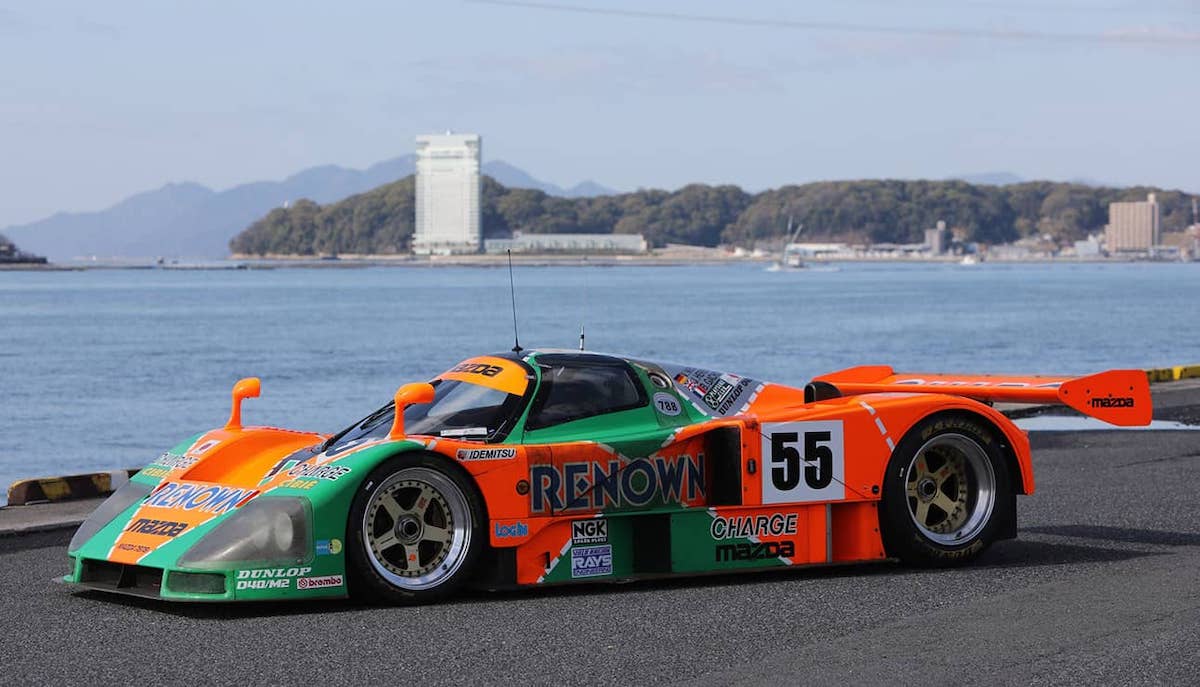 The Mazda 767B laid the groundwork for its Le Mans 24-winning successor, the legendary 787B
© Mazda.com

Yet another race-winning prototype from Japan, the Mazda 787B won the 24 Hours of Le Mans in 1991 with Mazda’s quirky 654cc, four-rotor Wankel engine and became the first ever Japanese car to win the greatest endurance on earth. The number 55 car finished 362 laps around the 13.9km La Sarthe circuit, and set an overall distance of approximately 4,923 kilometres. It was also the first - and so far only! - rotary-engined car to take victory at Le Mans. The identical Mazda 767B - that’s the racer you see above - was the 787B’s predecessor, and whilst it doesn’t have the Le Mans-winning pedigree of the car that came after, it set the groundwork for one of the most iconic machines in endurance racing history. At the 2017 Amelia Island auction, the 767B sold for $1,175,000. 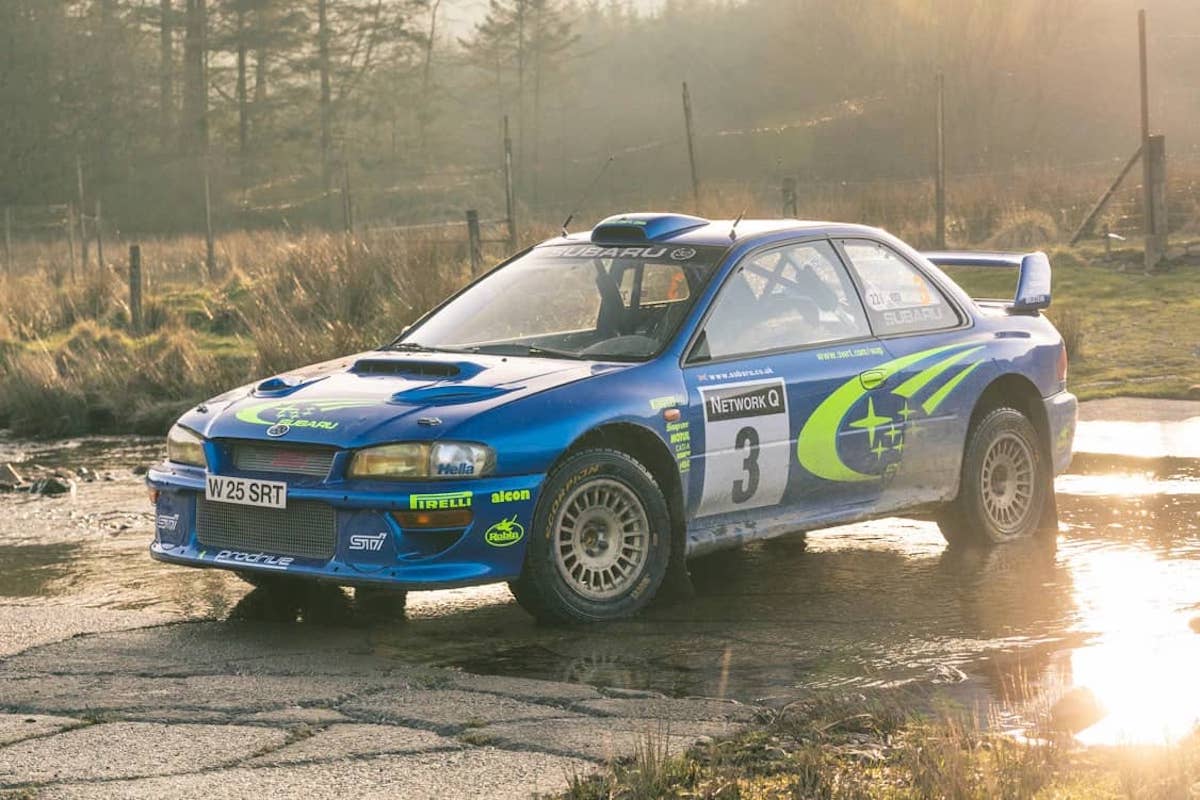 This ex-Richard Burns Subaru Impreza S6 WRC sold for over £600,000 at auction with rally battle scars and all
© CollectingCars.com

No list of the most expensive Japanese cars (or Japanese cars in general, really!) would be complete without a Subaru Impreza, so here we are. W25 SRT is a Subaru Impreza S6 WRC2000, which was driven by 2001 World Rally Champion, the late Richard Burns. During the 2000 season, Burns took four wins and finished second in the drivers’ standings; just five points shy of title winner Marcus Grönholm. In 2021, the car Burns drove to victory on home turf at the 2000 Rally GB, sold for over £600,000 on CollectingCars.com. Interestingly, the car was handed over to its new owner in the condition it had finished Rally GB; battle scars and all! 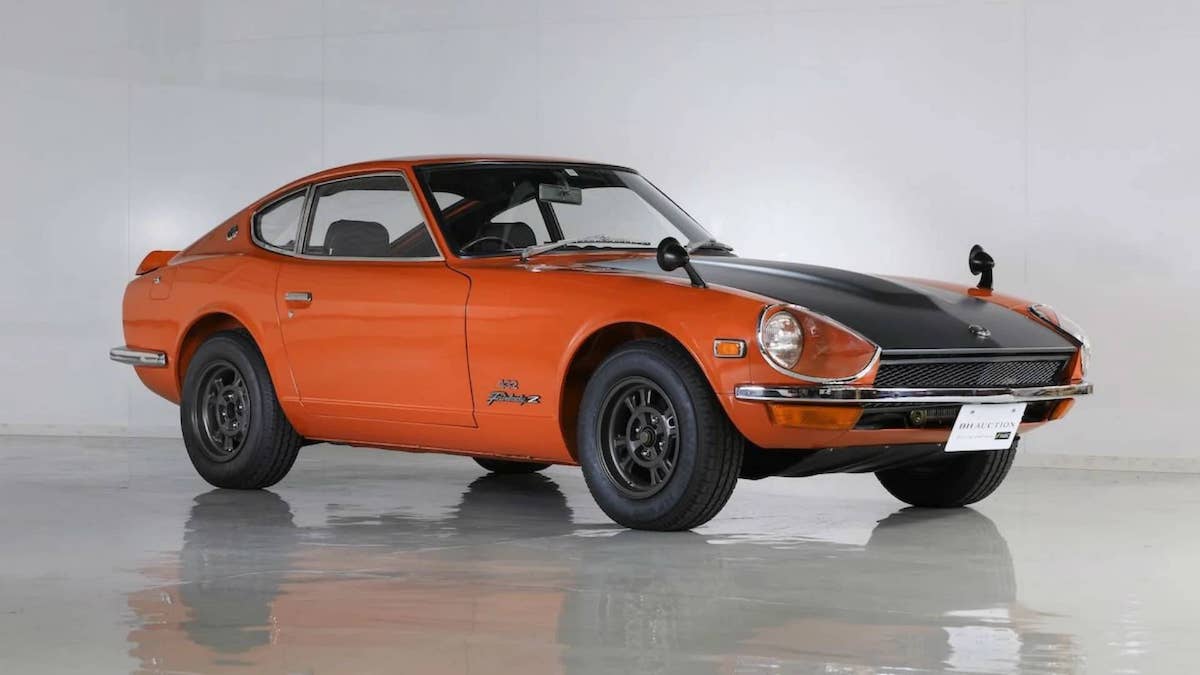 Just 400 units of the hardcore Nissan Fairlady Z432R were made, which may explain why the cost of one will set you back more than $805,000
© RoadAndTrack.com

Selling for a princely $805,000 in January 2020, the Nissan Fairlady Z432R was a very expensive, very special edition of Nissan’s iconic sports car. The Z432R was a lightweight, hardcore variant of the regular Fairlady with four valves per-cylinder (that’s the ‘4’), three carburettors (that’s the ‘3’) and dual camshafts (that’s the ‘2’). The car was fashioned from thinner-gauge steel, and with the exception of the windscreen, all of the glass was replaced with acrylic. Oh, and the hardcore Z432R had no creature comforts; no heater, no clock, no soundproofing, and no radio. Essentially, then, this was Japan’s answer to the Porsche 911 R of the late 1960s and early 1970s. Oh, the Z432R was rare, too - Nissan made just over 400 of them. 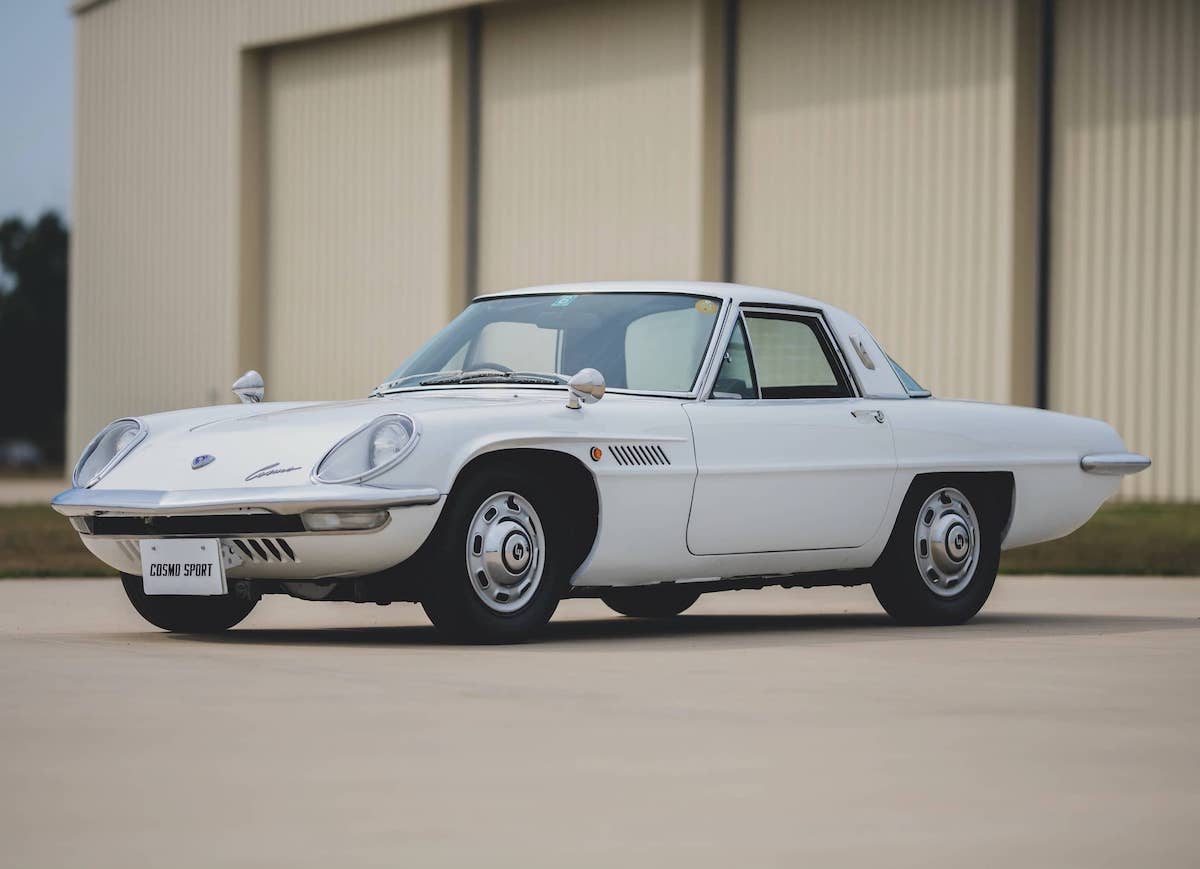 Quirky, pretty, and expensive are three words that sum up the Mazda Cosmo 110
© Silodrome.com

Launched in 1967, the Mazda Cosmo 110 was a world-first. The futuristically-designed sports car was highly-praised for its futuristic proportions and innovative two-rotor, 982cc Wankel rotary engine which made 110bhp and propelled the car to a respectable top speed of 114mph (185 kmh). Mazda produced just 343 Cosmo 110s, so its exclusivity demands a six-figure asking price on the collectable classic car market; so much so, that a restored early Cosmo sold for $264,000 at Pebble Beach in 2014. 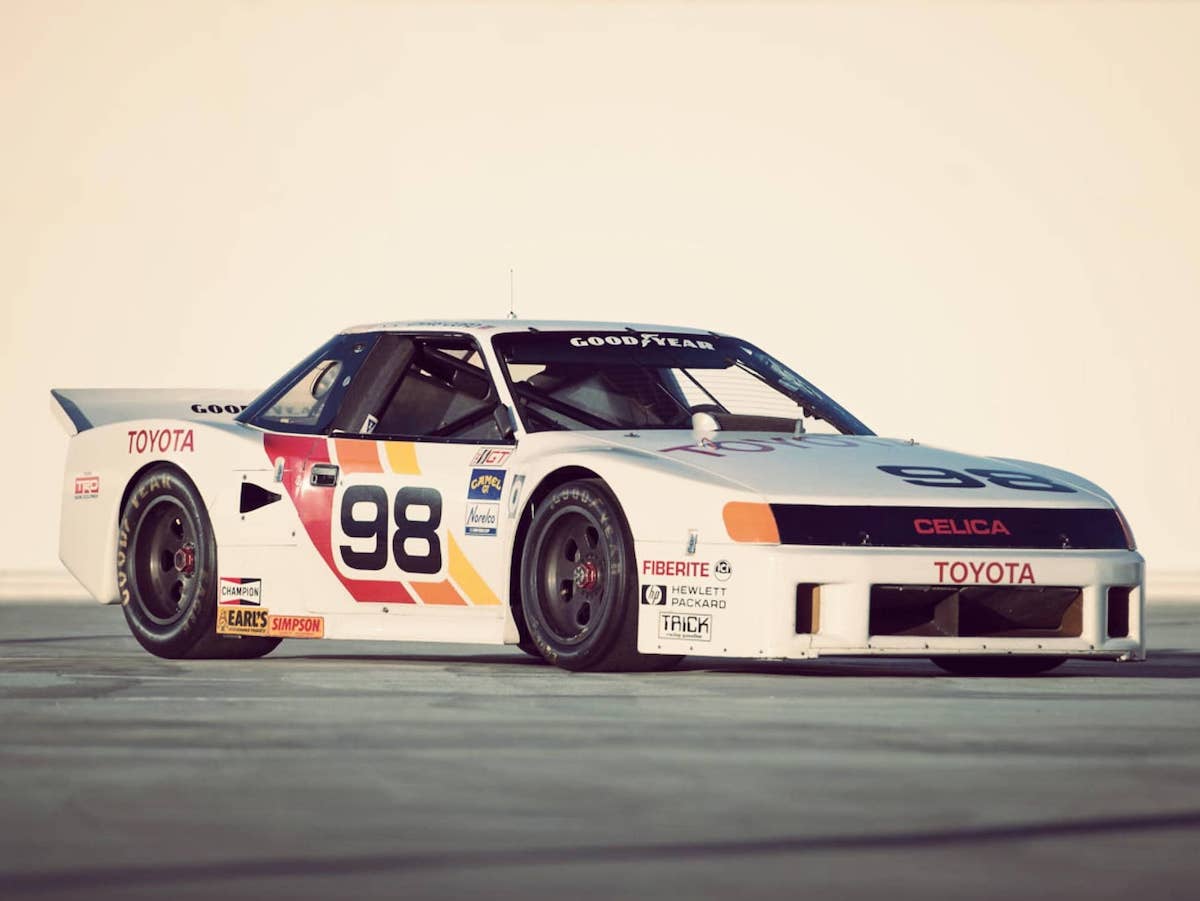 The Celica IMSA GTO was another iconic AAR/Toyota collab with a six-figure asking price
© Silodrome.com

Once again a collaboration between AAR and Toyota, the Celica IMSA GTO was a purpose-built race car to compete in the North American IMSA series. Introduced in 1986, the car was a Celica in name only thanks to its tubular space frame chassis, aerodynamic body, and a turbocharged version of Toyota’s mighty four-cylinder engine that produced over 600bhp before IMSA regulations clamped down, and Toyota was forced to downtune the motor to 450 horses. Just three Celica IMSA GTOx were produced; one for the 1986 season, another for 1987, and a last car for 1988. At a Sotheby’s auction in 2014, this 1986 car was sold for $242,000.

Are you now interested in owning a car from any of the brands on this list? Click here to browse through the thousands of Japanese cars we have listed for sale on Dyler.com!