The Week in Cars: Celebrating Sir William Lyons and 119 Years of Jaaaaaaags

Whilst no longer with us, we’d still like to say a big thank you to “Mr. Jaguar”. Had his original business - the Swallow Sidecar Company - not morphed into Jaguar after World War II, we wouldn’t have this uniquely British car company.

We love Jaguars because they are unique in their ability to combine incredibly sophisticated aesthetics with unprecedented levels of cool, luxury, and on supercharged models - eye swivelling standards of performance and a howling, V8 soundtrack that would shame a valkyrie.

Whether it’s the performance of the E39 M5-bating, Jaguar XJR X308 or the Ian Callum-designed cool of the XF, each of these cars appeals to our inner gentleman hooligan. Jaguars are like Pierce Brosnan’s James Bond - they can hold their own in a fight, but nobody will suspect they’re a bit handy because they’re wearing a tailored suit.

Sir William passed away in 1985, so he wouldn’t have been able to see the five modern classic Jaguars we’ve included in the fourth edition of This Week in Cars.

These ones are for him. 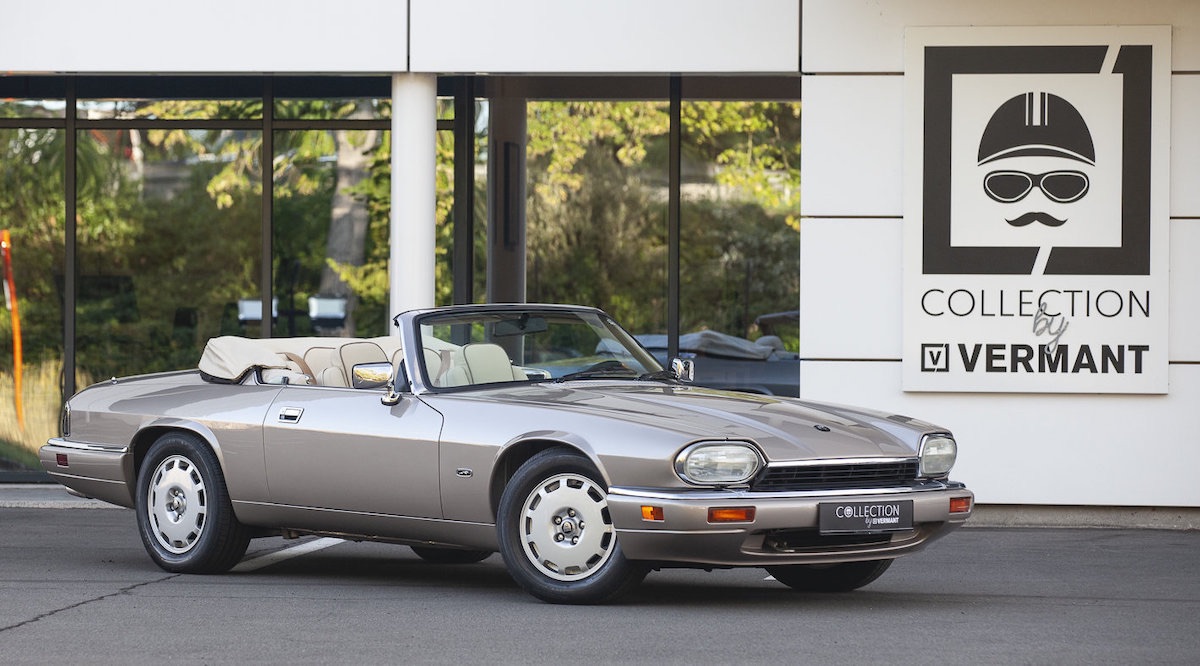 Only 4,000 of these exclusive XJS Celebration models were produced by Jaguar
© Collection by Vermant

Produced from 1975 to 1996, the Jaguar XJS is one of the British brand’s most popular models amongst classic car enthusiasts. Throughout its extensive life, the XJS was always appreciated for its sleek, low-slung design that characterised Jaguars, and the coupé model’s prominent rear flying buttresses were a key feature of the car’s overall aesthetic. The XJS was powered by a straight-six or V12 engine, which when combined with Jaguar’s characteristic wood and leather interior, helped earn it a reputation for being an immensely capable grand tourer that could soak up the miles. The model here, the ‘Celebration’ was commissioned to celebrate Jaguar’s 60th anniversary. Only 4,000 of these exclusive Big Cats were produced, and to add even more luxury to the occasion, each of them had a wooden steering wheel, diamond-cut alloys, and Jaguar-embossed leather seats. Whilst the XJS is unlikely to reach E-Type levels of money, their value jumped 50% from 2007 to 2017. Experts estimate that prices will continue rising year-on-year by the thousand in the not too distant future.

PRICE:
EUR 26,450
LINK TO CAR AND DEALER:
Collection by Vermant
USELESS CAR FACT:
A Jaguar XJS won the Cannonball Run in 1979. It achieved the journey from New York to Los Angeles in a record time of 32 hours and 51 minutes. The record stood until 1983 when it was beaten by a Ferrari 308. 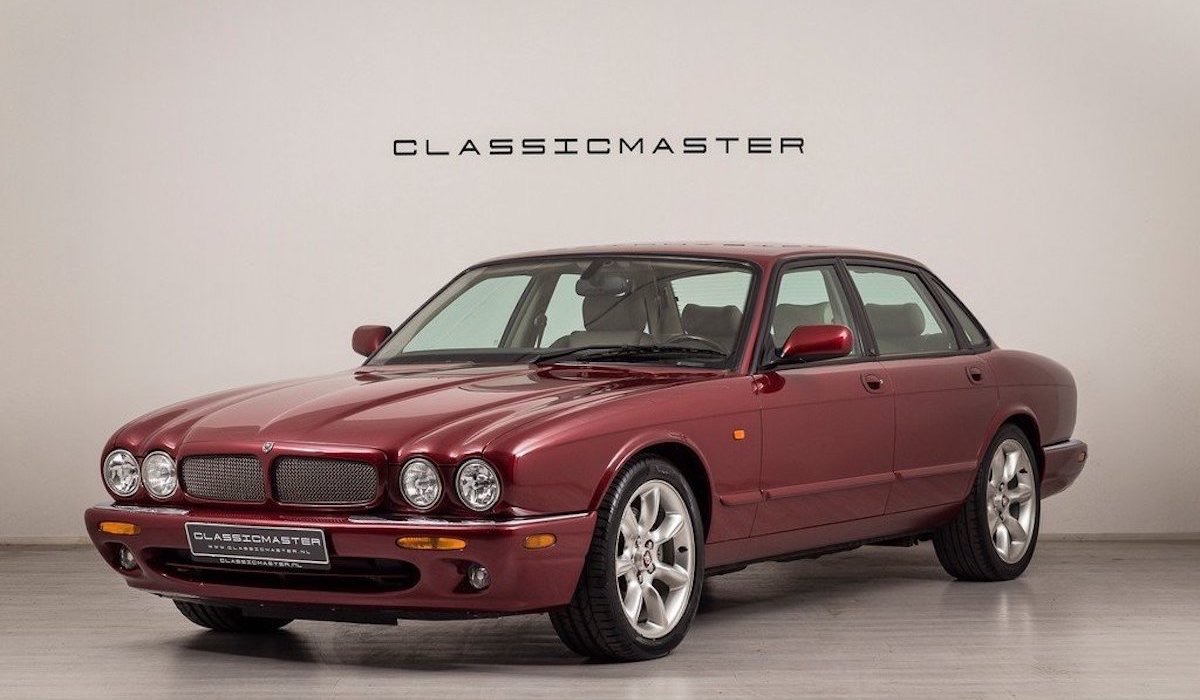 In 2019, the Jaguar XJ went out of production after 51 years. The XJR was its hot model - Jaguar’s answer to the Mercedes Benz E55 AMG and BMW M5. The model you see here, the X308, is widely considered to be Peak XJR as it was the perfect combination of Jaguar’s classic visual elegance and modern gentleman thuggery thanks to the howling, supercharged 4.0-litre V8 shoehorned under the bonnet. During its lifetime, the X308 enjoyed positive reviews from the motoring press, and TV’s Jeremy Clarkson even owned one describing it as “faster than a Ferrari F355 in the real world - the epitome of luxury, beauty, and performance.” The Jaguar boasted a 0-60mph time of just 5.6 seconds and an electronically-limited top speed of 155mph, which even in 2020 is remarkable for a car that weighed almost 2,000 kilograms. The XJR was also praised for its handling, which was often compared to the BMW M5 E39 - a car considered to be one of BMW’s finest cars ever. In fact, Motor Trend summed the X308 XJR up as “a masterful blend of British Luxury and American muscle.” At the time of writing, Jaguar has yet to announce a replacement for its XJ line of cars as it assesses its future in an automotive world that’s constantly transitioning towards electric power. If we never see an XJR again, that’ll be a sad day.

PRICE:
EUR 24,950
LINK TO CAR AND DEALER:
Classicmaster
USELESS CAR FACT:
Despite weighing nearly two-tonnes, the XJR was quicker to 0-60mph than Jaguar’s two-door XK GT that you see below. 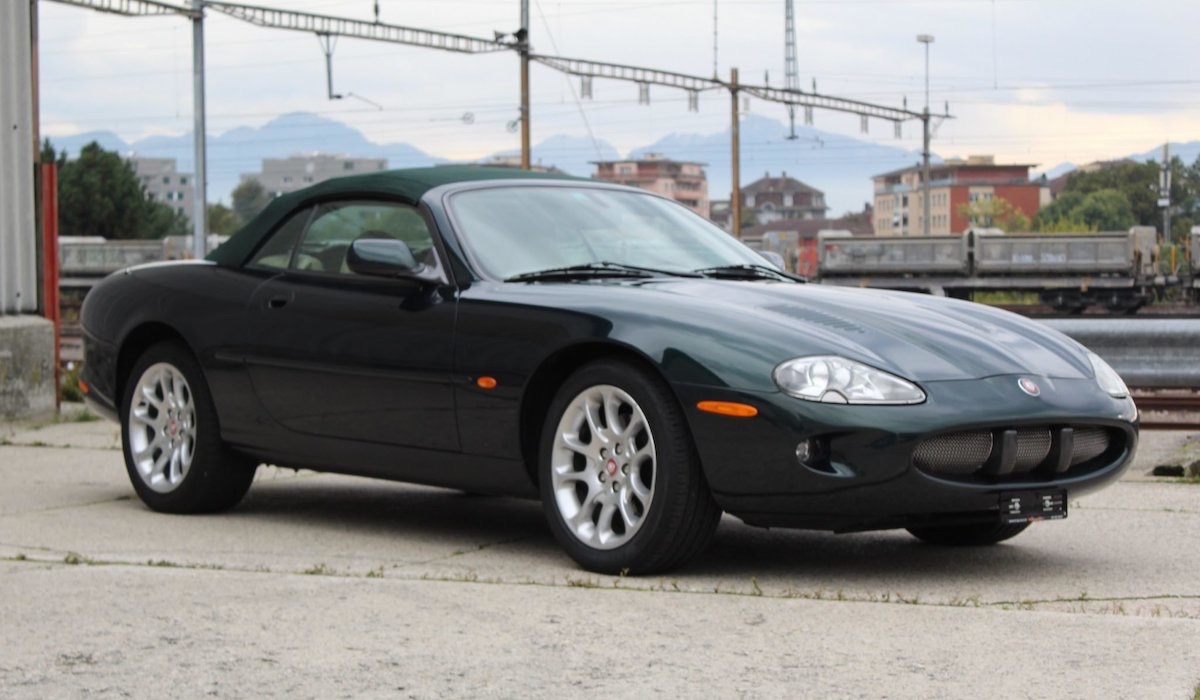 The Jaguar XK was a replacement for the ageing XJS
© WoowMotors

The Jaguar XKR was the performance version of Jaguar’s XK grand tourer - a car that launched in 1996 to replace the XJS. Like Jaguar’s XJR super-saloon, the X100 XKR was powered by the brand’s 4.0-litre V8, but it boasted a new intercooler and two-piece driveshaft to handle its higher 370bhp power output. The XKR’s subtle performance cues such as 18-inch wheels, a mesh front grille, and aerodynamic bulges on the bonnet differentiate it from the standard XK. However, the interiors of both are full of the sumptuous wood and leather that came to be expected from Jaguars of the time. This first generation of the XKR also featured in the 2002 James Bond movie, ‘Die Another Day’ and was arguably cooler than the Aston Martin Vanquish driven by the British super spy. Jaguar also launched a limited edition ‘Silverstone’ edition of the XKR for the 2001 model year to celebrate its return to Formula 1. Whilst the Big Cat’s F1 tenure wasn’t exactly a high point in its illustrious history, the limited run of 456 Silverstone XJRs remain highly lucrative amongst collectors thanks to a unique platinum paint job, upgraded suspension and engine, as well as 20-inch BBS alloy wheels, and a silver birds-eye maple wood interior.

PRICE:
P.O.R.
LINK TO CAR AND DEALER:
WoowMotors
USELESS CAR FACT:
At the time of production, Jaguar was owned by Ford and parts sharing was not uncommon in an effort to save costs. Look closely, and you’ll see that the air vent rotators and some of the buttons on the centre console on early cars are shared with the Ford Mondeo. 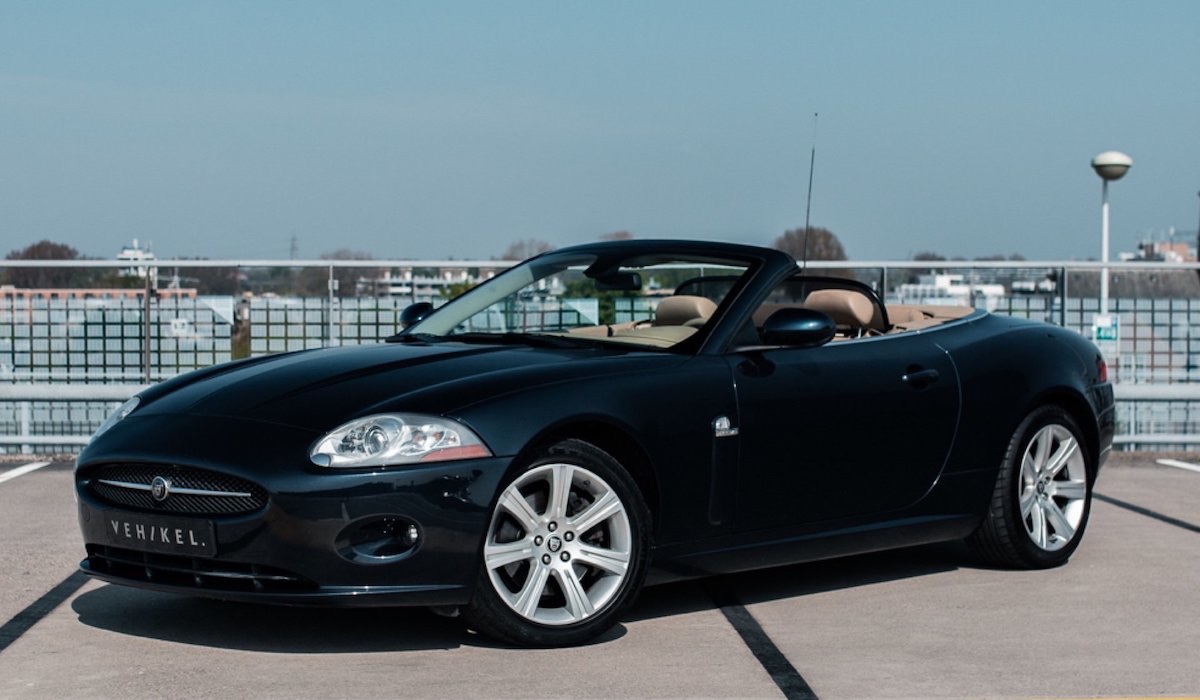 The X150 was the second generation of the Jaguar XK cars and the first to be designed by Ian Callum - the gentleman responsible for the Aston Martin DB7 and the Aston Martin Vanquish. Unlike its predecessor, the X150 had a fully aluminium chassis and fully aluminium panels which resulted in a weight reduction of 91 kilograms and improved performance - whilst both electronically limited, the standard XK had a top speed of 158mph whilst the XKR topped out at 174mph. What’s interesting about this second-gen XK, is that Callum incorporated design elements of the past - for example, the grille was inspired by the E-Type - but sought to move the brand away from the wood and leather that characterised Jaguars of the past. As a result, the XK150 had no wood trim as standard on the interior. The XK was discontinued in 2014 after nine years of service. Until now, Jaguar has no plans to replace it.

PRICE:
EUR 21,750
LINK TO CAR AND DEALER:
Vehikel
USELESS CAR FACT:
Contrary to popular belief, the Jaguar F-Type is the “spiritual successor to the E-Type” and not the XK, despite using most of the latter’s tooling. 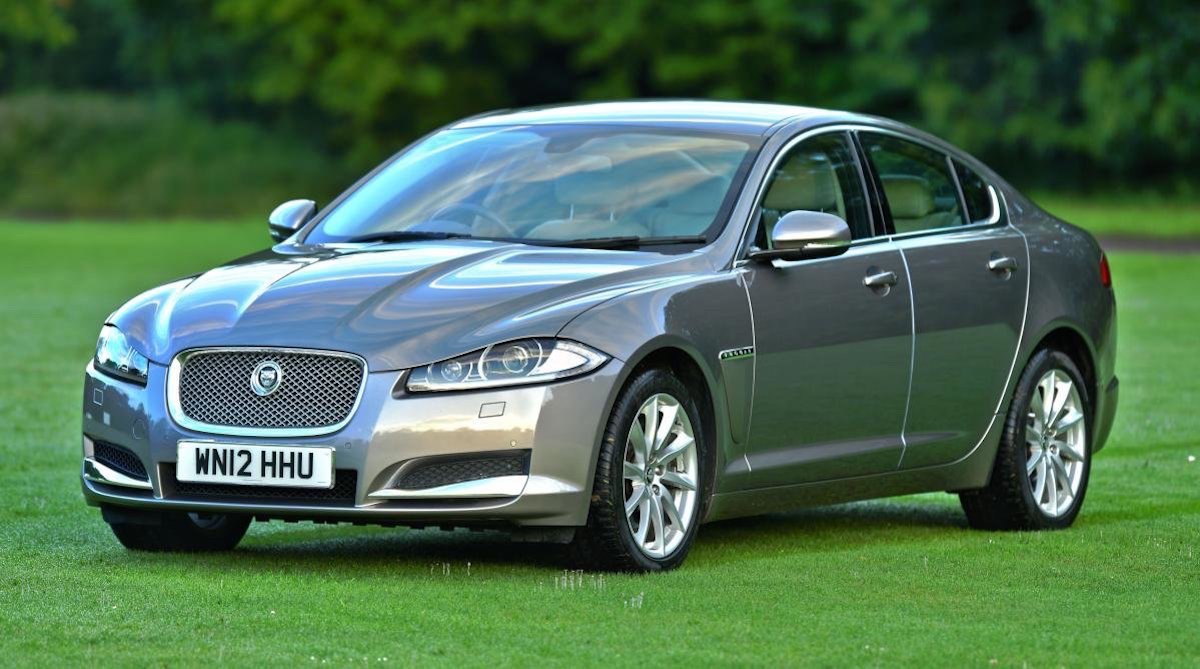 The Jaguar XF was another Ian Callum-designed car that heralded Jaguar’s departure from its traditional wood and leather demographic. The car that preceded it was the S-Type. Whilst mechanically solid and decent to drive, its retro styling harked back to the 1950s which is exactly what Jaguar sought to move away from in the late 2000s. When launched in 2008, the XF did just that and introduced an entirely new aesthetic to the manufacturer. Its interior was more urban cocktail bar than golf club, with restful blue lighting, classy aluminium trim, and control buttons that rose up from from the transmission tunnel. Along with the inside, the XF’s exterior was also a far cry from Jags of old which were more a case of evolution that outright revolution. The XF is future classic because of what it represented for Jaguar - it took the manufacturer well into the 21st century. During his tenure as Director of Design Jaguar, Callum was quoted as saying that “Jaguars should be perceived as cool cars and cool cars attract interesting, edgy people.” With the XF, he certainly succeeded there.

PRICE:
EUR 49,555
LINK TO CAR AND DEALER:
Vintage and Prestige
USELESS CAR FACT:
The latest version of the XF - the X260 - is the most aerodynamically efficient Jag ever with a drag-coefficiency of 0.26Cd.