This Week in Cars: Takeaways from Germany’s Classic Car Scene

According to a 2020 report, Germany boasts the largest classic car market in Europe with over 2,000,000 classic and modern classic cars registered on German roads.

The prevalent train of thought amongst Germany’s classic car buyers is ‘buy local’. This means that the majority of classic car enthusiasts tend to opt for models made by Mercedes-Benz, BMW, Porsche, Volkswagen, and Opel.

The findings from the same report showed that classic cars from the 1950s-70s are the most in-demand with wealthier buyers.

These models include the BMW 3.0 CSL ‘Batmobile’, the Porsche 911 Turbo (930), and Mercedes 600. There is also a consistent demand for classic Volkswagen models including the Golf (and its US-derivative, the Rabbit), the Beetle, the Karmann-Ghia, the Thing, and the Transporter.

As-per the wider global classic car market, there has also been a recorded interest in growth amongst Millennial buyers in Germany.

Now, I don’t know about you, but I’ve heard that Germany is quite good at this car thing, especially when it comes to well-engineered, well-built cars.

With that in mind, this edition of This Week in Cars is all about what we learned from reading the reports on the German classic car market. The five cars we have selected for you this week are all taken from our findings.

Oh, and why it may seem like a random topic to cover, it’ll all make sense very shortly.

Thanks for reading, and until next Friday! 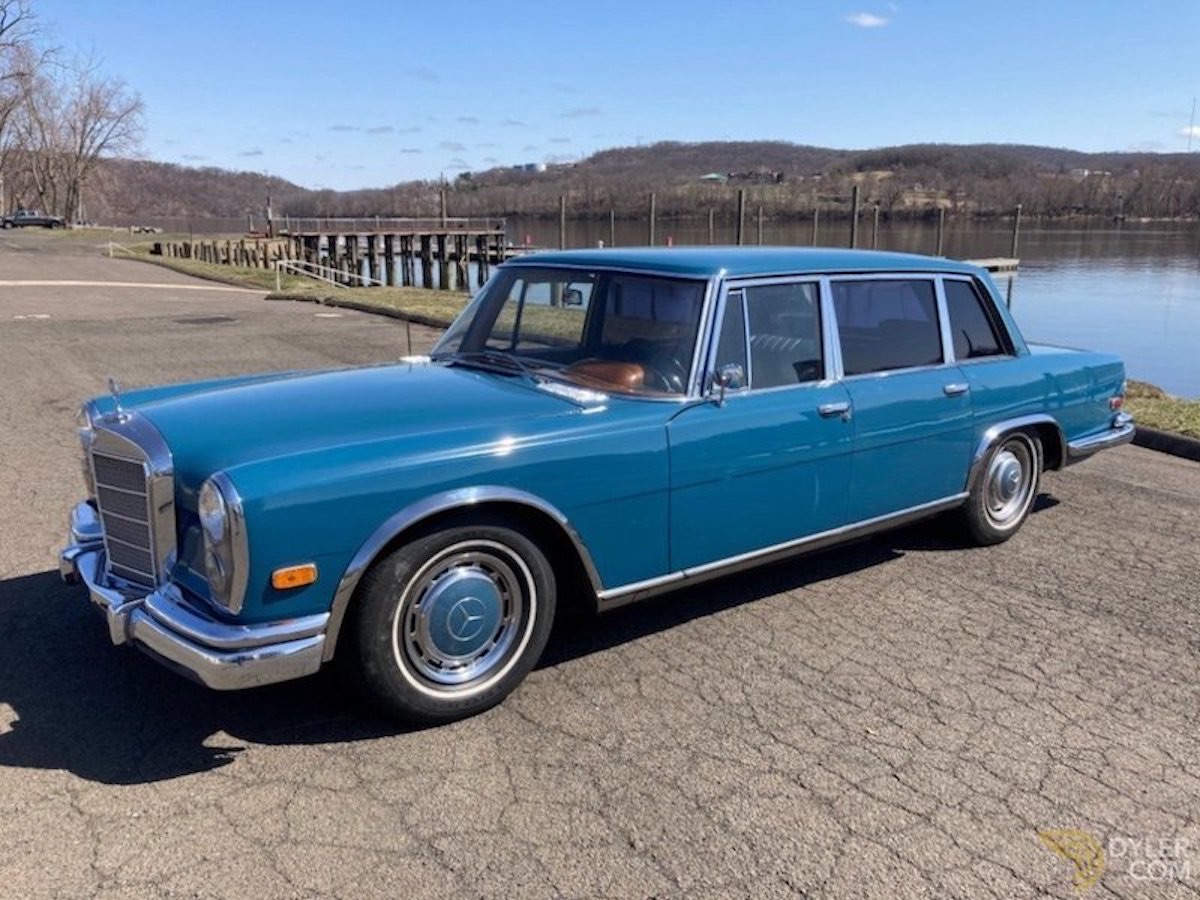 Both the choice of dictators and Jeremy Clarkson, the Mercedes-Benz 600 is a classic car that is predecessor to the modern day Maybach
© Gullwing Motor Cars

In production from 1965 to 1981, the Mercedes-Benz 600 was the forerunner to the modern day Maybach flagship luxury car. Known as the Grand Mercedes due to its kerb weight of 3,000 kilograms, the 600 - like all big Mercedes today - was praised for being a byword for luxury and technology. The interior was a symphony in wood and leather front back, whilst the car rode on an air-suspension, meaning it would ride pillow-like across rough roads thanks to its pneumatic suspension. The 600 came in two body styles - a short wheelbase four-door car, which was already 5,540 millimetres long, and a long wheelbase four-door version called the ‘Pullman’. Whilst the car of choice for celebrities over the years, the Pullman was also the choice of a number of dictators around the world, including Kim Jong-Un, Kim Jong-Il, Idi Amin, and Papa Doc Duvalier. Jeremy Clarkson had one, too. 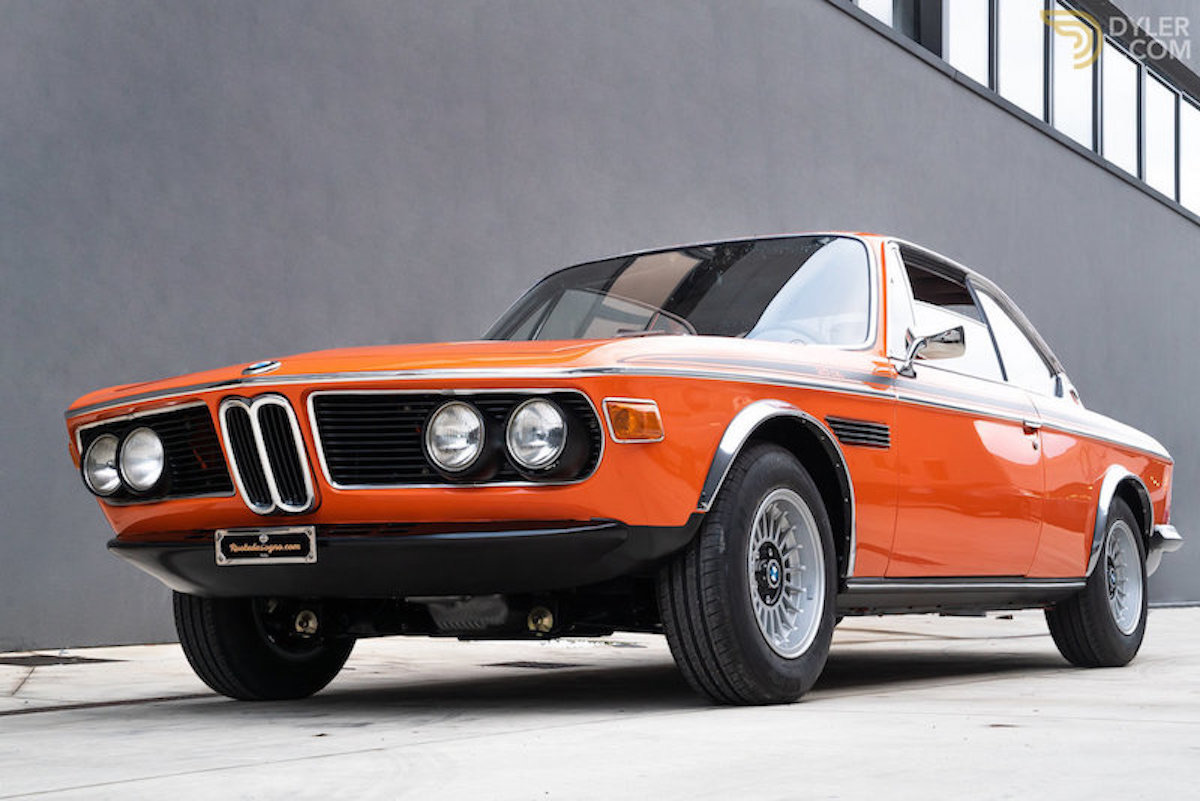 Expensive, rare, and iconic, the BMW 3.0 CSL is one of the most desirable classic cars from Germany at present
© Ruote da Sogno

The letters 'CSL' are three of the most important and iconic in BMW history. Munich's timeless 3.0-litre coupé was designed for the racetrack, meaning only 1,000 of these 'Batmobile' cars were made. As a homologation special, the shark-nosed CSL (meaning "Coupe Sport Leicht") had aluminium doors, an aluminium bonnet, and an aluminium boot. As well as being highly technologically advanced for when the CSL came out in the late 1960s, the aluminium bodywork was also an effective weight saving measure. From 1968 to 1978, the CSL won five European Touring Car championships, making it one of the all-time great BMW race cars. Of equal importance is the fact that it was the first car to be engineered by what would become the legendary BMW M division in the future. It may not have the 'M' badge found on later cars from Munich's skunkworks, but the CSL was the first car to have worn the iconic blue, purple, and red badging found on future M Cars. 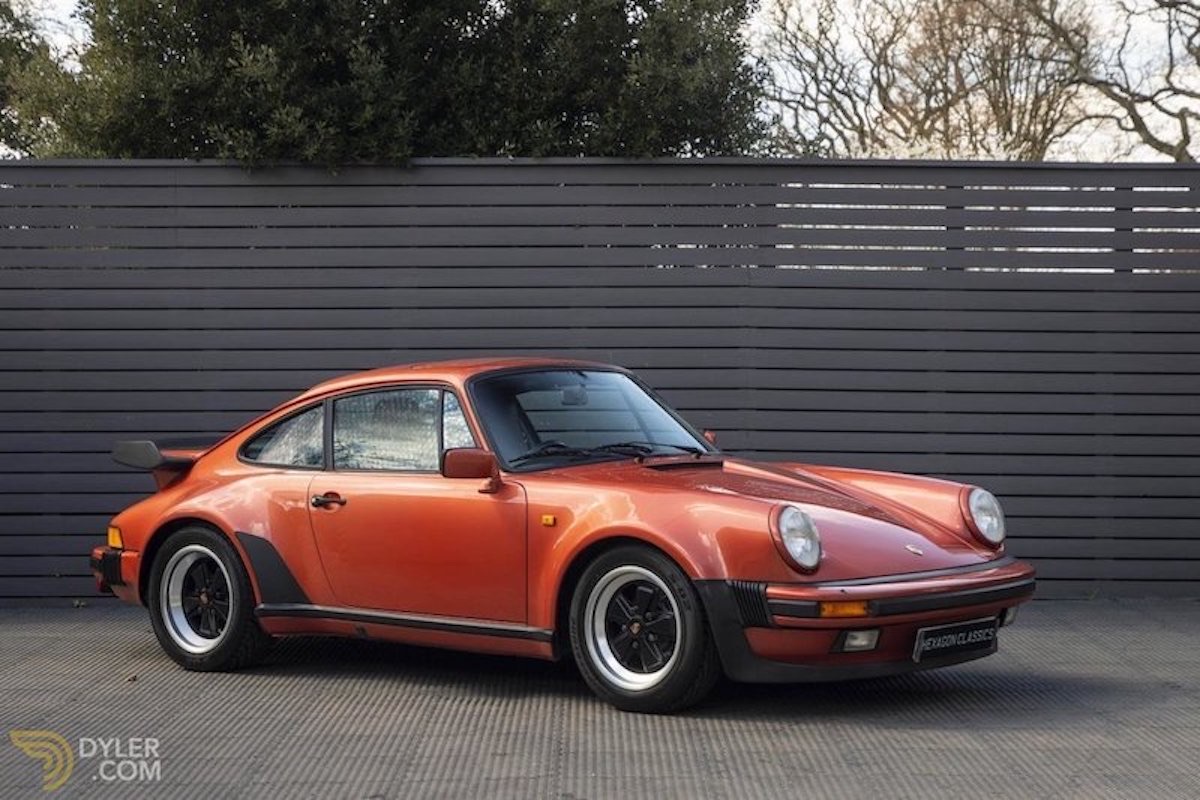 The Porsche 930 Turbo is the first-gen 911 Turbo, and along with the later 993, is one of the most desirable classic cars on the German classic car market
© Hexagon Classics

The 3.3-litre Porsche 930 Turbo you see here was the forefather to the current iteration of the 911 Turbo - the all-wheel-drive, twin-turbo, supercar which you can use as a daily. Despite being known as the “widowmaker” or “witwenmacher” in German, the 930 Turbo wasn’t as fearsome as its morbid moniker suggested. However, the on/off nature of the turbo’s power delivery through the rear wheels to its 3.3-litre, rear-mounted engine means that even now, some 40 years since its launch, the 930 Turbo is a car that demands your full respect. The heavy, non-power assisted steering, turbo lag, and a manual gearbox that needs to be worked hard is a further sign that the 930 Turbo requires you to bring your A-Game every time you go for a drive. Let your guard down, and the ‘Whale Tail’ will let you know otherwise. 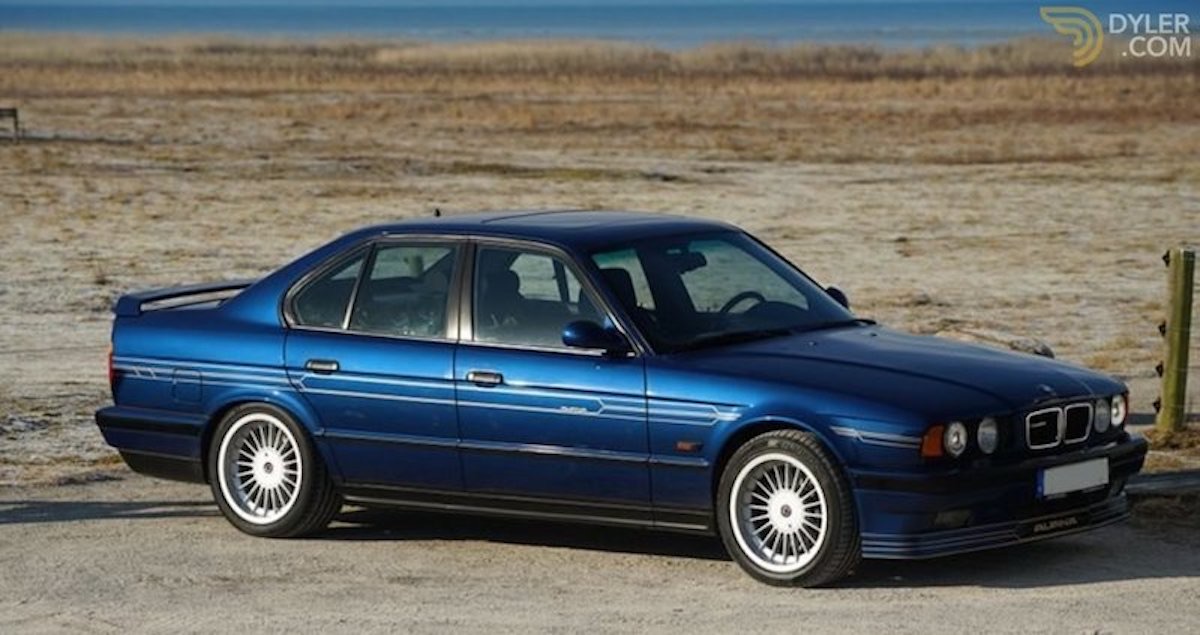 Already a classic car in its own right, the BMW E34 Alpina was the most powerful 5 Series on sale from 1989 to 1994
© Classix by Schiebler

We’re fans of a fast sedan here at Dyler, so the BMW E34 Alpina B10 BiTurbo very much ticks all of our boxes. From 1989 to 1994, just 504 of these ultra rare, twin-turbocharged E34s were made. By the time production stopped, it was the best-selling Alpina BMW ever. The German tuning house ripped out the standard car’s 208bhp motor and replaced it with a twin-turbo unit, which produced 355bhp, and a top speed of over 180mph. This made it faster than the much more expensive Ferrari Testarossa, and alongside being the world’s fastest sedan, was considered by the motoring press at the time to be one of the fastest production cars in the world.

PRICE:
EUR 62,000
LINK TO CAR AND DEALER:
Classix by Schiebler 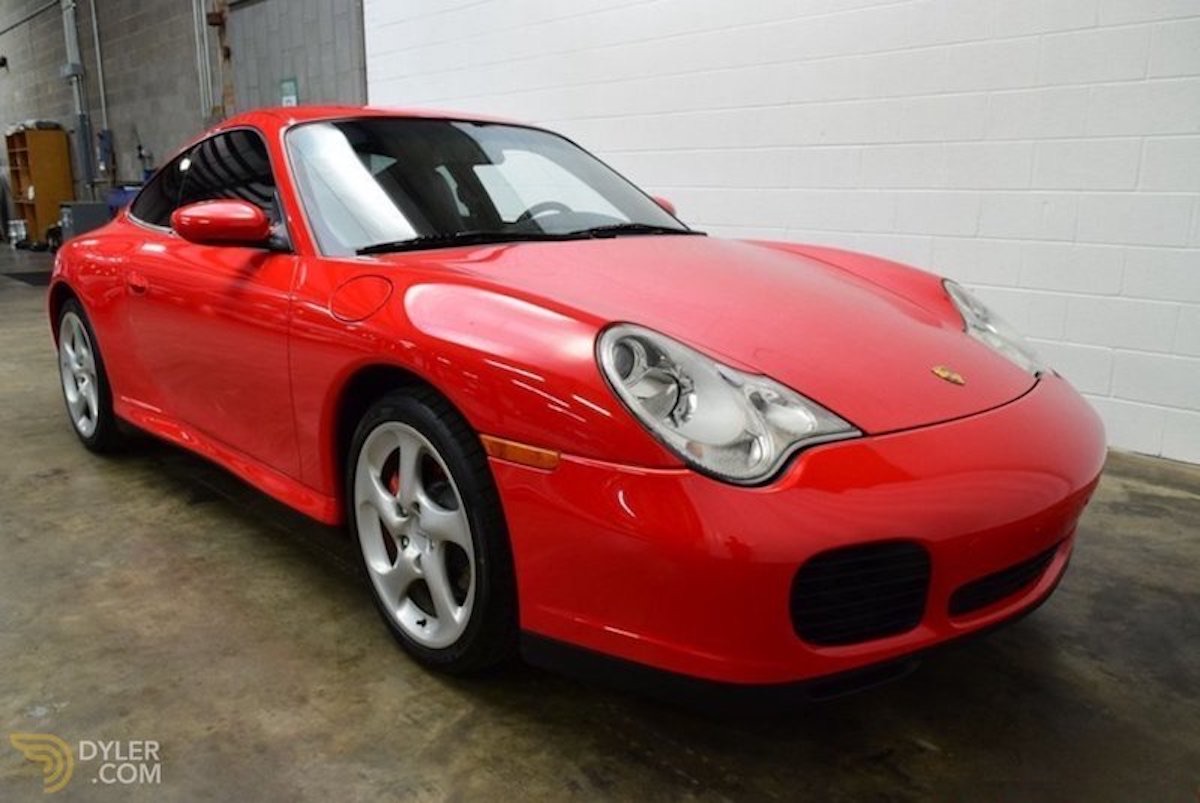 The Porsche 996 is already a classic car, and base models can cost less than a brand new hot hatch
© Shelton Classics & Performance

Introduced in 2002, the Porsche 996 Carrera 4S has the wider, flared body taken from the faster 911 Turbo, yet when compared to newer 991s and 992 cars, it still manages to look dainty and highlights just how porcine modern cars have become over the last few decades. The Carrera was and still is the entry-level 911. Even in C4S guise, the 996 is still a reasonably simple machine, and therein lies its beauty. Its 3.6-litre, flat-six boxer engine is naturally aspirated, whilst the passive rear axle and mechanically-assisted steering make for a truly engaging, analogue experience behind the wheel. Reliable, fast, and usable as a daily as well as a weekend sports car, the 996 is a throwback to a more mechanical era.