From 2005 to 2019, Bruno Spengler earned a reputation as being one of the fastest drivers in the DTM. Nicknamed “the secret Canadian” due to his low-key nature, Spengler scored 16 wins, 51 podiums and 18 pole positions from 195 starts - numbers which put him firmly amongst the top 10 most successful drivers that the DTM has ever seen.

Spengler started his DTM career with Mercedes-Benz and his stellar performances - for example, finishing as championship runner up just in his second season - saw him almost land a McLaren Mercedes Formula 1 drive alongside Lewis Hamilton for 2008. 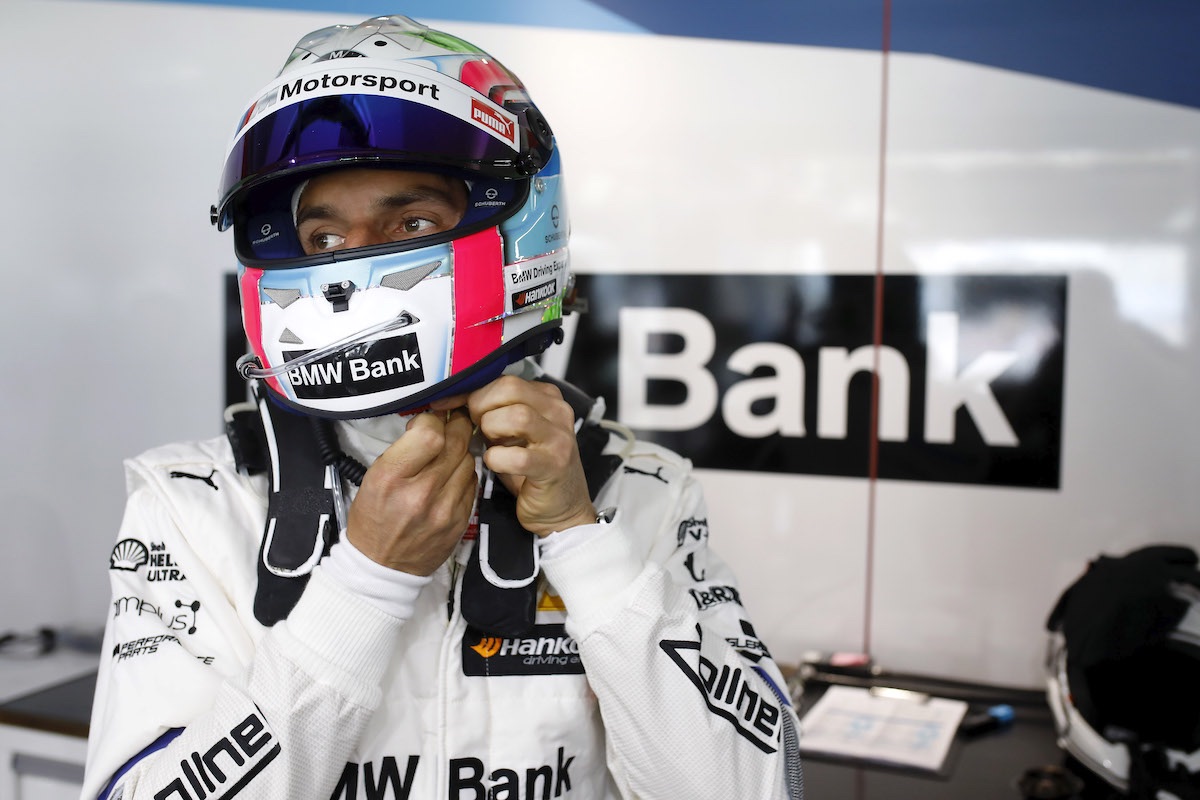 For reasons known only to then-McLaren chief Ron Dennis, the Woking-based team chose Heikki Kovalainen over to partner Hamilton in the Briton’s 2008 title year. However, McLaren’s and Mercedes’ loss turned out to be a win for BMW, and, in 2012, the Canadian joined the Munich carmaker to lead its assault in the DTM after a 20-year hiatus.

What happened next was a motorsport fairytale: In BMW’s DTM comeback season, Spengler scored his maiden DTM title behind the wheel of an M3 DTM which earned the nickname of “the black beast” - a fitting term for Spengler’s car, given its aggressive matte black livery.


If the driver’s title wasn’t enough for BMW, the Munich powerhouse also beat its rivals Audi and Mercedes-Benz to the manufacturer’s championship. To complete the Triple Crown of the drivers’, manufacturers’, and team’s titles, the legendary BMW Schnitzer outfit - for whom Spengler drove - was the 2012 DTM season’s team’s champion.

Within the space of a year, Spengler and “the black beast” had rightfully earned themselves a place amongst BMW royalty such as Alessandro Zanardi, Jonny Ceccotto and Robert Kubica. 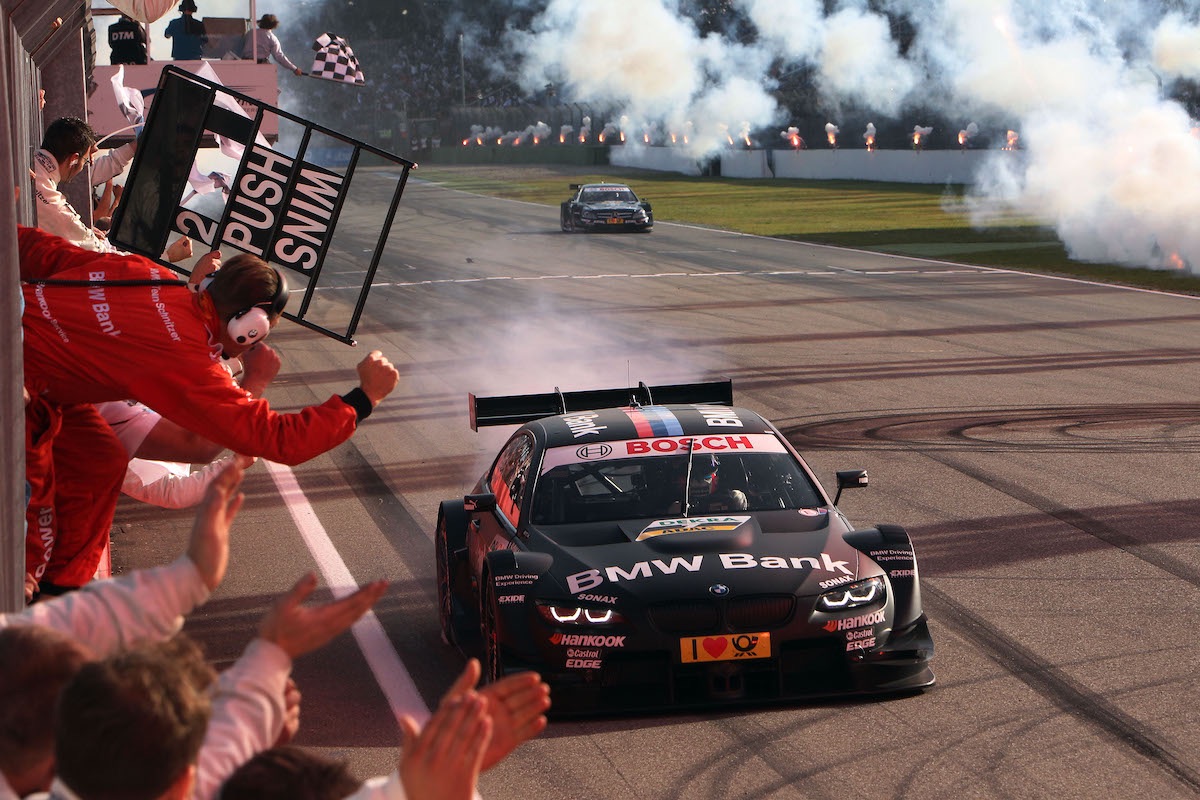 In 2014, the BMW M3 DTM became the BMW M4 DTM . In 2019, the series moved away from 4.0-litre V8 engines to four-cylinder, 2.0-litre turbocharged units as part of a newly-introduced “Class One” regulations and the pairing continued to cement their place in BMW Motorsport history.

For 2020 though, the story between Spengler and “the black beast” was over. At least for now. BMW management moved Spengler away from the DTM to compete in the United States-based IMSA WeatherTech SportsCar Championship with the BMW M8 GTE - an endurance race car based on the BMW 8 Series G15 - which is run by BMW works outfit, BMW Team RLL.

Meanwhile, the car that became synonymous with Spengler in the DTM will be raced by series returnee, Lucas Auer.


Considering the history between Spengler and “the black beast,” does the 36-year-old Canadian feel aggrieved at being separated from a car that took him to championship glory and cemented his position as a BMW and DTM icon?

“Was I upset at finding out I wouldn’t be racing in the DTM this year?” he replies when asked this question by Dyler.com. “Well, I was a little bit, that’s for sure, but, if I look back, I have nothing to complain about! 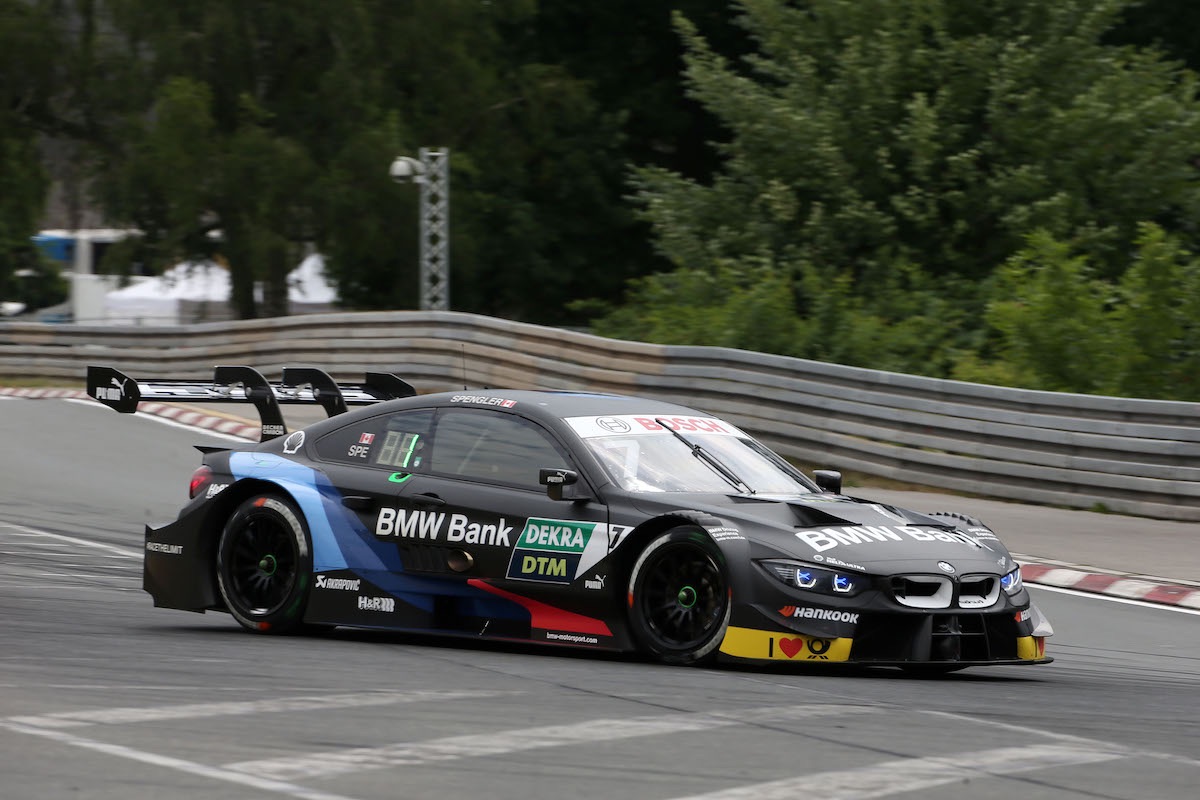 After 15 season in the DTM, Spengler took 16 wins and one championship
© BMW Press Club

“The M3 DTM was an amazing race car, and I honestly think that it was one of the greatest racing cars that BMW has ever made, so, with the championship and that whole bunch of wins and pole positions and great memories we made together, I’m in no position to sit around being upset. Also, remember that I raced in DTM for 15 seasons which is a long time, so I’m very much looking forward to getting going in IMSA once the season gets started again.”

Adapting to the “Big M8” from the M4 DTM


Spengler’s optimism about his stateside adventure does not come without reason. Whilst a factory BMW DTM driver, he dovetailed his commitments with a number of outings in the US behind the wheel of an RLL run BMW Z4 GTE, a car he describes as “immensely fun and driveable,” and an RLL-prepared M6 GTE, the predecessor to the M8 GTE. At the time of writing, the Canadian’s best results were a second place in the 2015 24 Hours of Daytona, and another runner-up spot in the following year’s 12 Hours of Sebring.

In his first outing as a full-time IMSA driver in the 2020 season-opening Daytona 24, Spengler and teammate Connor De Phillippi finished fifth in their BMW Motorsport liveried M8 GTE. Not a terrible result by any standard, but given the sister car won the event, what were the biggest challenges that Spengler faced in switching from the M4 DTM to the M8 GTE - a car that in 2018, gained “Big M8” meme status due to its significant size. 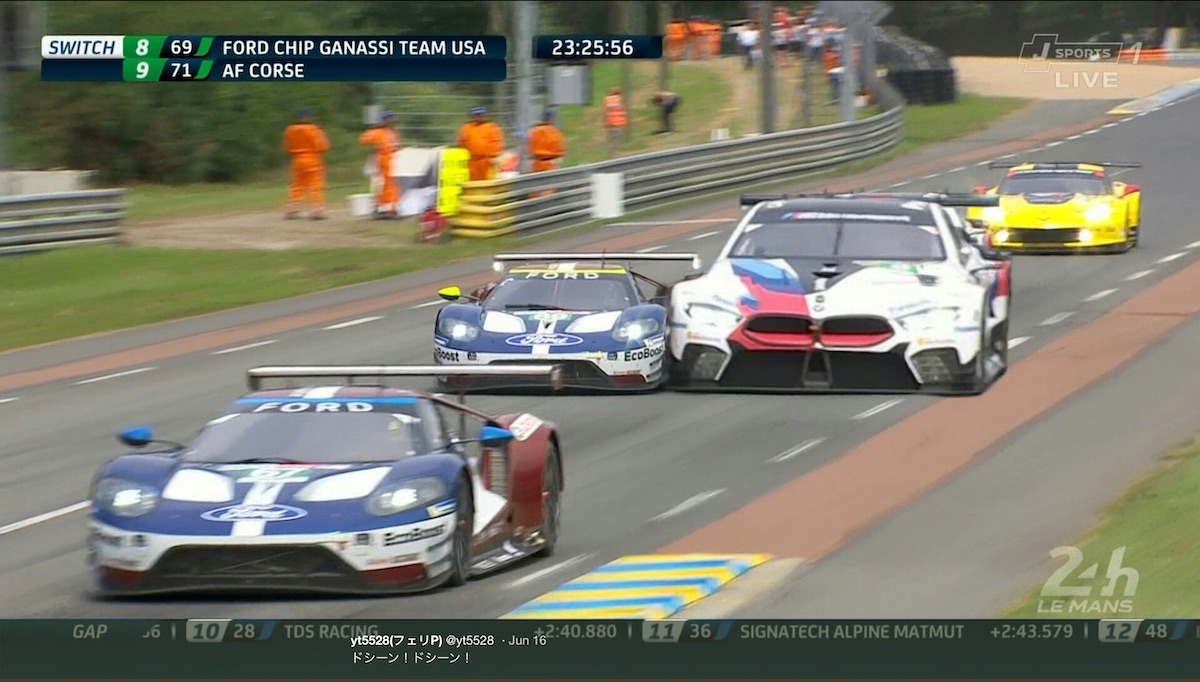 “I think that there’s some truth in the ‘Big M8’ meme,”’ he explains with a laugh. “Of course, it’s some Internet silliness as whilst the M8 GTE is bigger than it’s rivals, it’s not massive like the meme would suggest. At the end of the day, all BMW has done is pursue a different concept to its rivals. At the end of the day though, watching different types of cars race each other is what makes GT racing worth watching.

“If I have to compare the M3 and M4 DTM to the M8 GTE, I would start off by saying that they are very different machines and I have a lot to learn. To begin with, a GT is much heavier than a DTM car - I mean the M8 is 1,250 kilogrammes, and the M3 and M4 are around 200kg lighter than that. A GT also has a lot less downforce as well as non-carbon brakes. As a driver, this means you can’t brake as late as you would in a DTM machine.


“The biggest challenge in adapting to the GT’s lower downforce and extra weight is having to adjust your corner entry speeds and braking points - you can easily end up pushing a bit too much in these areas and losing out on lap time. 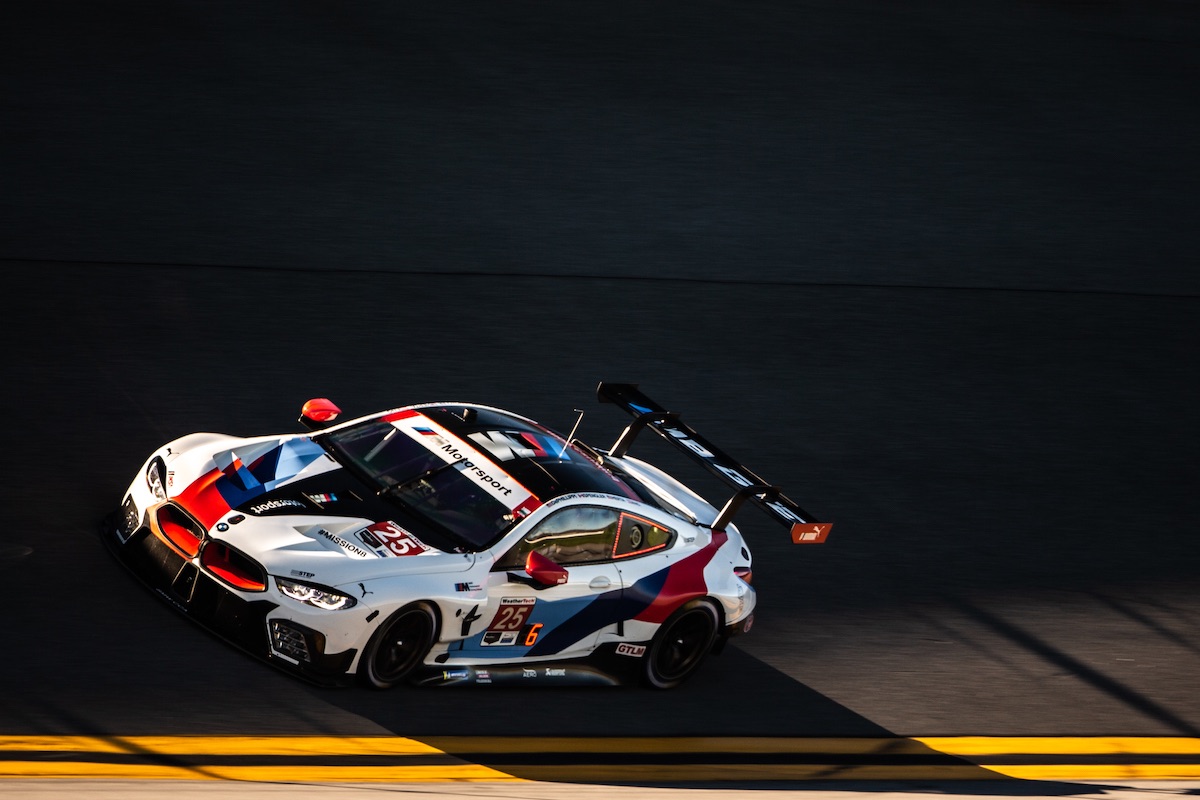 As the COVID19 pandemic put a temporary stop to all motorsport activity, Spengler - like his former Audi DTM rival Nico Müller who Dyler.com interviewed in June 2020 - was using the iRacing simulator on the PC to keep “race sharp” ahead of the IMSA season restart on July 3rd.

He also points to eSports as his way of adapting to the M8’s handling characteristics. Given he was crowned the 2020 IMSA eSports champion with the M8 GTE, things are looking up for the Canadian.

“There’s obviously been no testing in the last few months, so I’ve been using the ‘virtual M8’ to get used to things ahead of the season restart, and I have to say, it’s extremely close to real life. I’ve only raced at Daytona and Sebring in North America, so racing online has definitely helped me get up to speed quicker with tracks I’ve never raced on in the past. That said, I’m under no illusion that this year will be easy at all.” 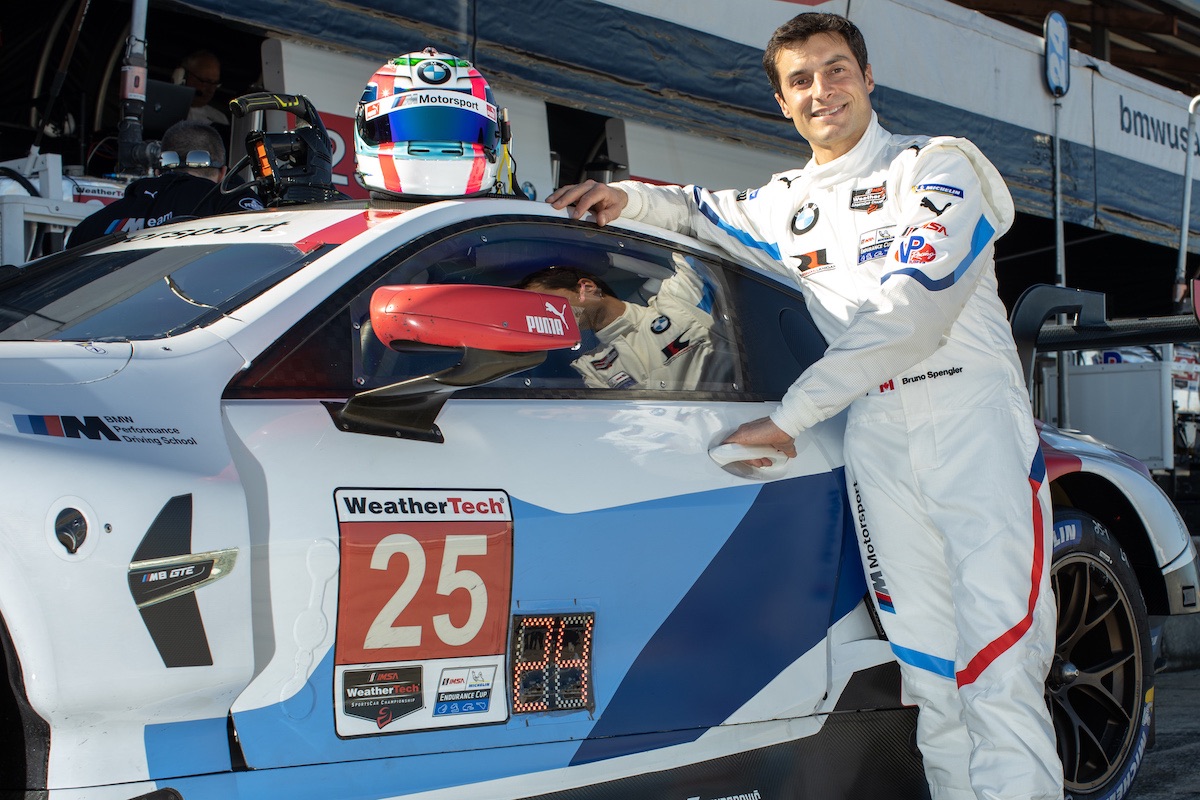 After having had the joy of experiencing some of BMW’s finest race cars first-hand, where does Spengler rank the M8 GTE in Bavaria’s catalogue of greatest hits?

“Well, I can’t choose an outright favourite because each BMW race car is special in its own way,” he concludes. “But if I had to choose, I would definitely say M3 DTM is up there because it was simply fantastic - each driver could easily set it up as he wanted, it was incredibly fast, and I won my DTM title in it.

“I like the Z4 GTE because it’s immensely fun and drivable, and the M8? I’d include that too - I like that it’s built on a totally different philosophy to its competitors and it was really cool to race it online, so yeah, it definitely ranks amongst my favourites.”

The next chapter of Bruno’s BMW career in the IMSA championship takes place on July 16 - 18 with the Cadillac Grand Prix of Sebring.

Bruno also cited the M5, X3 M Competition and the M3 E30 as his favourite BMW road cars. To take a look through the range of BMW classic and performance cars available on Dyler.com.