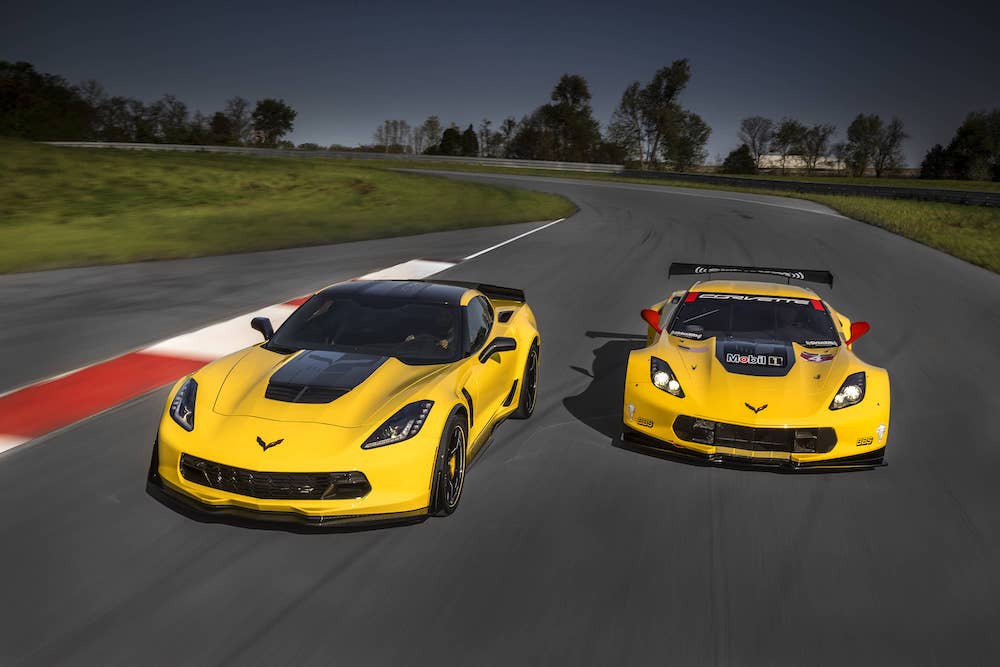 Whether you dig the distinctive off-kilter burble of a five-cylinder or prefer the howl of a naturally-aspirated V10, one thing that unites petrolheads across the world is their common love for the steady rumbling soundtrack unique to the V8.

Whilst most European carmakers are slowly ditching the V8 in favour of more efficient, equally-powerful engines - and the V8 was never really a “thing” in South-East Asia - it’s America whose love for the V8 remains as strong as ever since Cadillac introduced it into mainstream car culture in 1914.

To celebrate more than a century of the all-American V8 and everything that’s great and good about it, here are some of the best sounding V8s to have ever been manufactured across the pond. 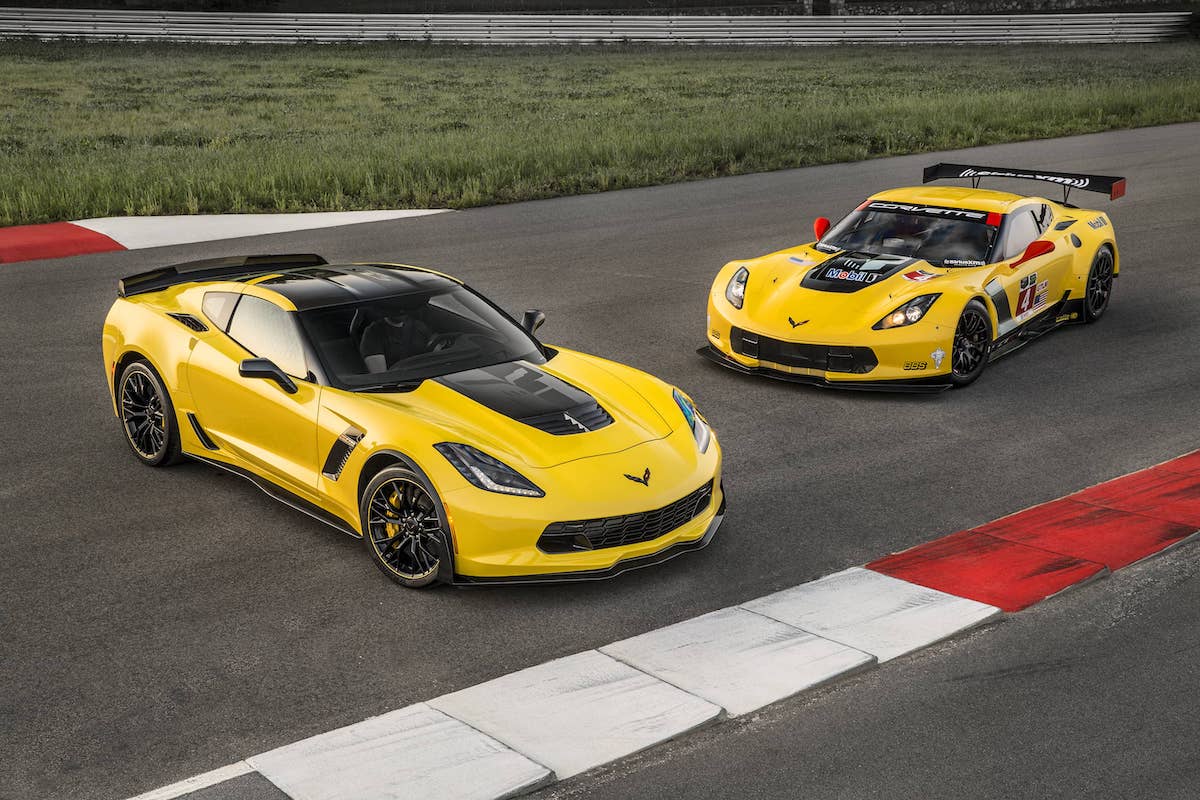 With its awesome-sounding 5.5L LT5 motor, the Corvette C7.R (right) is one of the most-loved American V8s from recent years
© General Motors

There’s a lot to like about the Chevrolet Corvette C7. It can stake a strong claim to being the best-looking Corvette ever, and it is by far the best sounding iteration of the all-American sports car. The last front-engined Corvette to be made before Chevy switched to its successor, the Ferrari-scaring C8, the C7 was only available with several small block V8s. The range of C7 engines started with the entry-level LT1, a 455bhp, 6.2-litre, and was rounded off with the supercharged, 755bhp LT5. Nevertheless, each C7 is aural nectar irrespective of power output. If we had to choose a favourite, though? It’d be the 491bhp, LT5.5 that powers the Corvette C7.R race car. The C7.R is a machine that captured the hearts of car enthusiasts across the globe, largely thanks to its goosebump-inducing, gnarly-sounding V8, and race-winning heroics in some of the greatest endurance races on earth including the 24 Hours of Le Mans, the 12 Hours of Sebring, and the Rolex 24 Hours of Daytona. Whilst the flat plane-crank, mid-engined C8 is a better car in almost every conceivable way whether in race or street spec, it doesn’t quite pack the same spine-tingling sense of theatre as its predecessor. 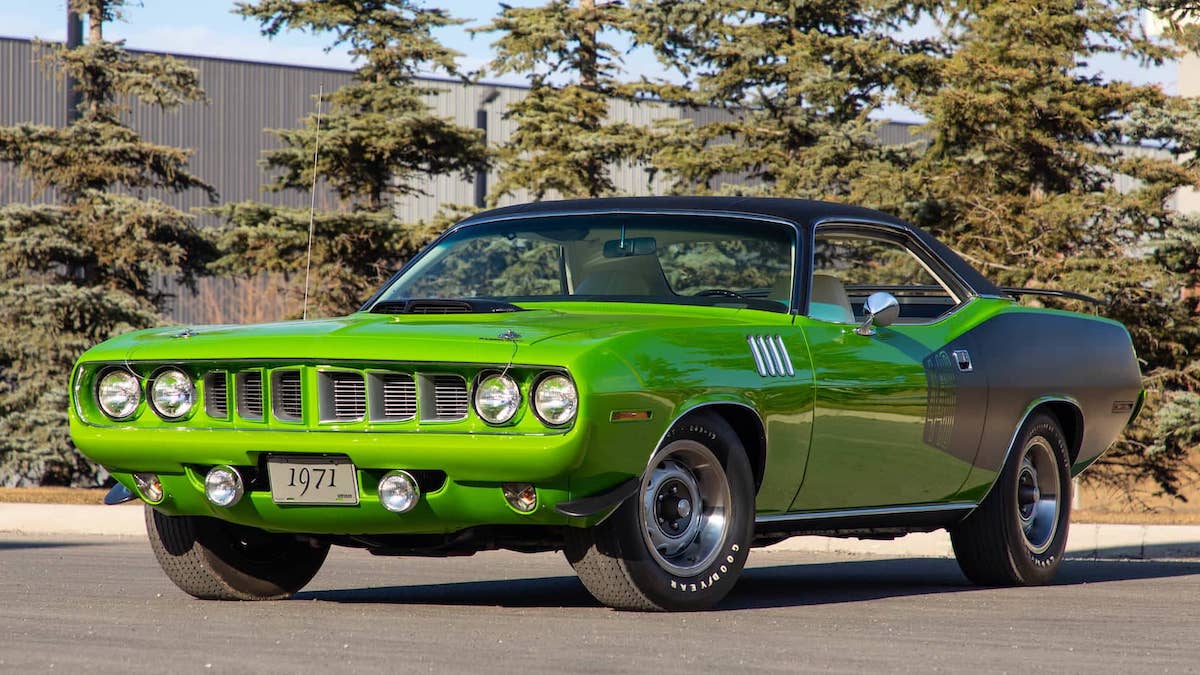 Just 115 high-performance Plymouth ‘Cuda were made, and every single one of them packed the legendary Dodge 426 HEMI V8
© MecumAuctions.com

It’d be impossible to create a list of the greatest-sounding American V8s and NOT mention the Plymouth 426 HEMI. Introduced in 1970, the engine was a 426 cubic inch (that’s 7.0-litres if you’re not from the United States) V8 good for 425bhp and a 0-62 time of 5.6 seconds. The engine was fitted to the HEMI-powered Plymouth ‘Cuda; a high-performance variant of the Ford Mustang-rivalling Plymouth Barracuda. Alongside the steady rolling soundtrack of the 426 V8, the ‘Cuda is arguably one of the coolest US muscle cars of that era. It resembled a meaner version of its sister car - the Dodge Challenger - and was available with a wide selection of lairy colours including Lime Light, Vitamin C, and Lemon Twist. The ‘Cuda also wore a ‘shaker hood scoop’ on its bonnet to force air into the engine. Just 115 426 ‘Cuda were sold by the time it was withdrawn from production in 1971, because Plymouth brand didn’t want to strangle the HEMI V8 to meet newly-introduced emissions regulations. No surprises that given its exclusivity, the HEMI ‘Cuda is one of the most expensive and sought-after classic US muscle cars of today. 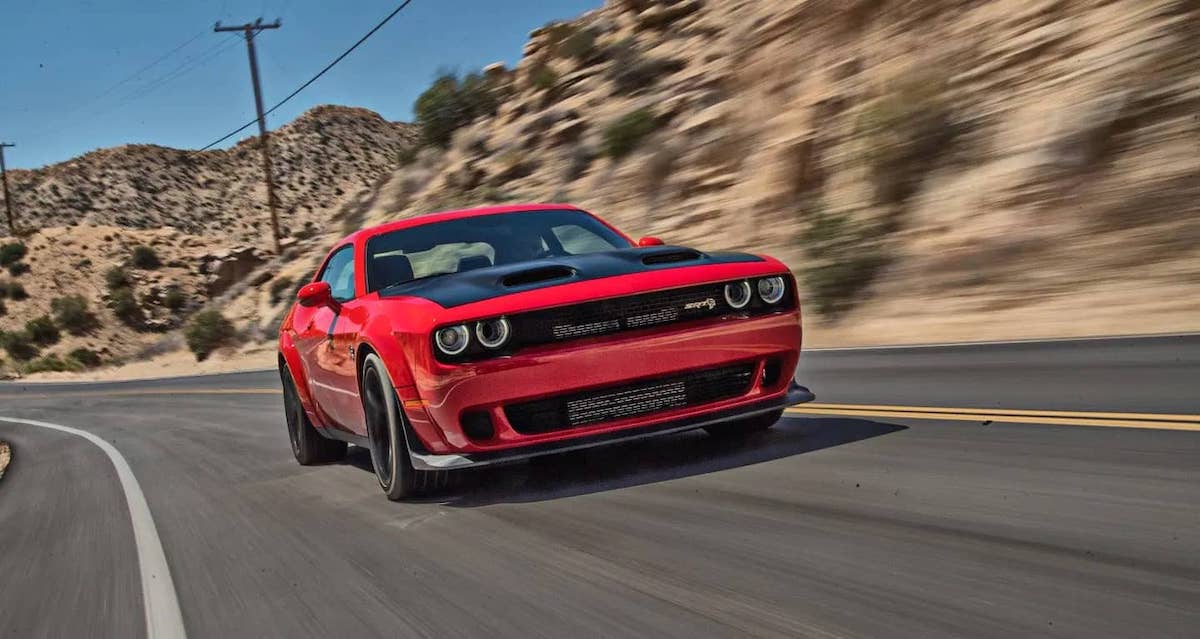 The fire-spitting 7.0L FE engine that powered the early Ford GT40 was responsible for The Blue Oval’s first outright victory at the 1966 running of the Le Mans 24 and has since gone down as one of the greatest American V8s in US automotive history
© Dodge

Time for another HEMI, and it’s the supercharged 6.2L V8 that powers the Dodge Challenger Hellcat; a car with one of the most distinctive engine notes in recent years. At low revs, the 6.2L has the American V8 burble we all know and love. Yet as the revs rise, the supercharged kicks in, and the earth begins to shake, the sound builds into an cacophonous, hellish scream that would make The Devil himself shake his cloven hooves in rapturous delight. With such large displacement numbers, it’ll come as no surprise that each Dodge Challenger Hellcat is fast and powerful. Very fast and very powerful, in fact. The entry-level SRT churns out ‘only’ 717bhp, the mid-spec Hellcat Redeye is capable of 797bhp, whilst the gnarliest, most demonic Hellcat spawns 807bhp. Whilst these cars will cost you a small fortune in tyres and most likely see you lose your driving licence at some stage, enjoy them whilst you can - Dodge confirmed that by the end of 2023, it will replace the HEMI Challenger and Charger with an all-electric muscle car. 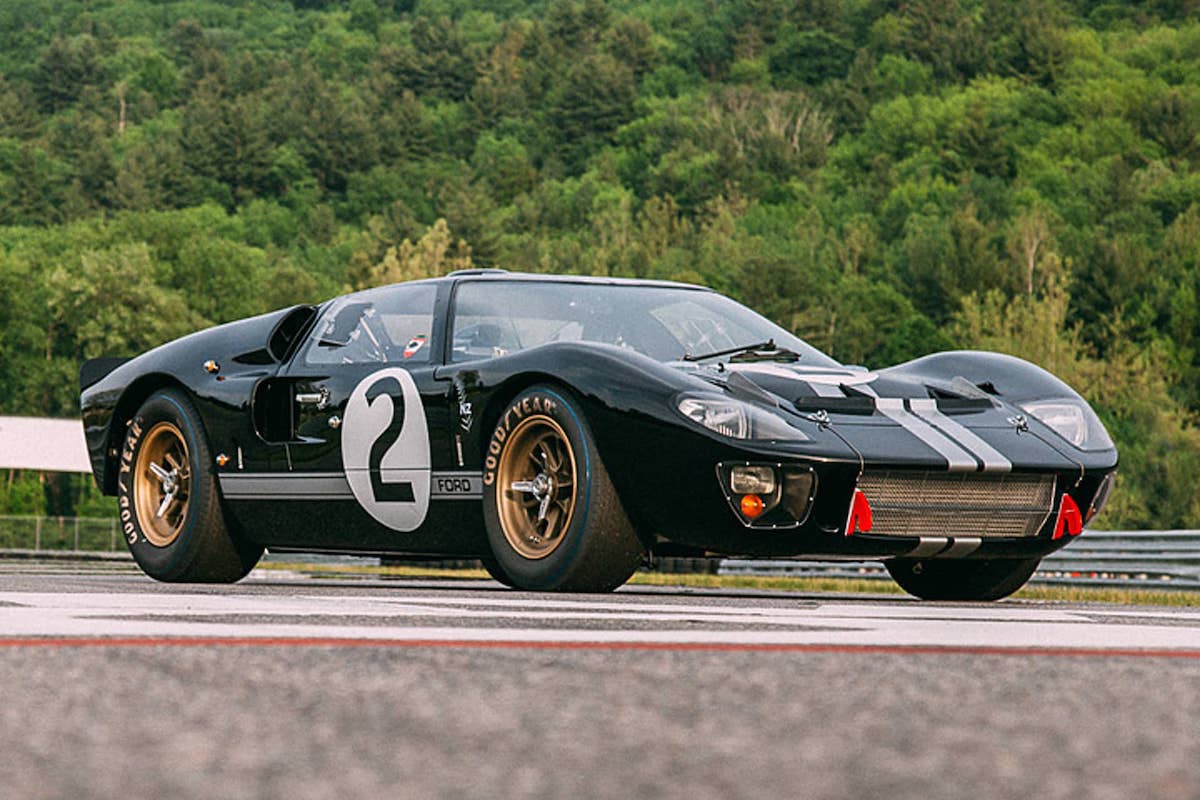 The fire-spitting 7.0L FE engine that powered the early Ford GT40 was responsible for The Blue Oval’s first outright victory at the 1966 running of the Le Mans 24 and has since gone down as one of the greatest American V8s in US automotive history
© Motor1.com

Like the Corvette C7.R, the classic Ford GT40 is another V8-powered endurance racer from the USA America. Like the Chevy, it also sounded sensational and took victory at the 24 Hours of Le Mans. Throughout its life, the GT40 was powered by several V8s, but the ear-splitting, raw-sounding 7.0L FE lump that helped Ford to its first LM24 victory in 1966 is widely-considered to be the pick of the bunch. The engine’s heroics were not limited to endurance racing, either - it enjoyed success in NASCAR, and by clubbing two 7.0L V8 FEs together to create a mighty 14.0L V16, the US Navy SEALs even used it to power some of its smaller, punchier watercraft at various points in history. 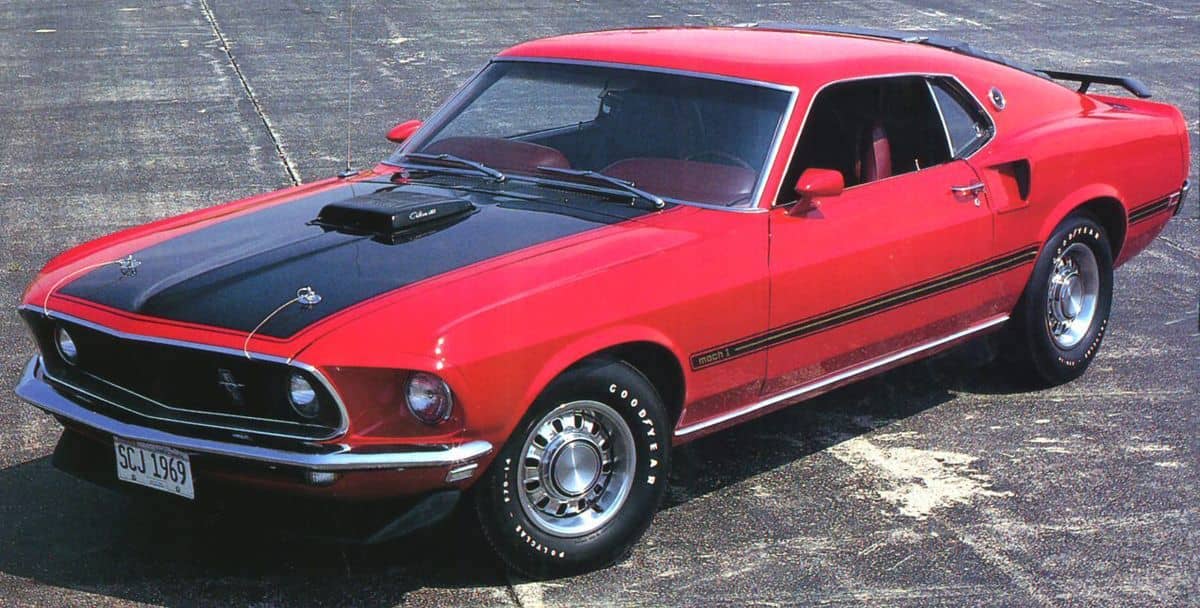 The 7.0L 428 cubic inch Cobra Jet V8 that powered the Mustang Mach (above) I re-established Ford as a force to be reckoned with in the muscle car game of the late 1960s
© Motor1.com

Towards the end of the late 1960s, the Ford Mustang was beginning to lag behind General Motors and Chrysler in the muscle car firepower stakes. To claw back some ground, the Ford engineers at Dearborn got to work, and they got their heads down to create the 428 Cobra Jet motor; a 428 cubic inch (7.0L) V8 capable of 335bhp - all figures that made the Cobra Jet one of the fastest classic Mustangs ever made. Upon its release in 1968, it was fitted to the Mach 1; a car considered to be one of the greatest Mustangs of all time.

All of these American-made V8s are very cool, so you have our full support if you want one of these cars. To browse the thousands of modern and classic American cars we have listed on Dyler.com, click these yellow words.