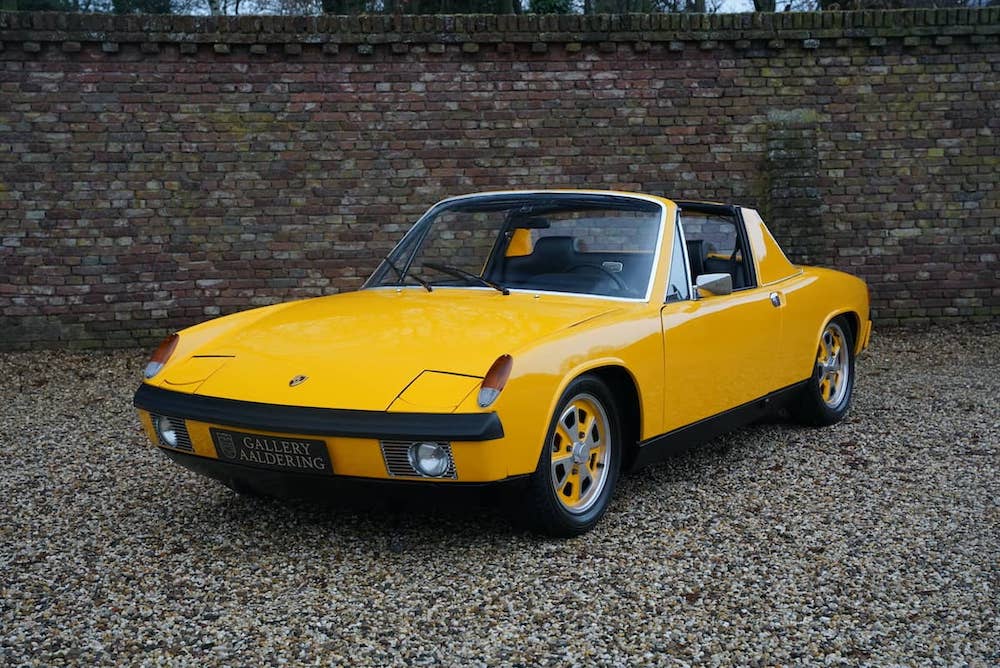 Air-cooled Porsche ownership is something classic car enthusiasts across the world crave. For many, the iconic Porsche 911 is the definitive sports car.

According to Classics World, turbocharged cars have also stopped going for silly money. Prior to the pandemic, a 993 Turbo would easily reach above EUR 200,000. In 2022, one of these can be picked up for around EUR 90,000.

The bad news is, given the 911’s popularity, these air-cooled cars are most likely to be snapped up soon and so the cycle begins again. 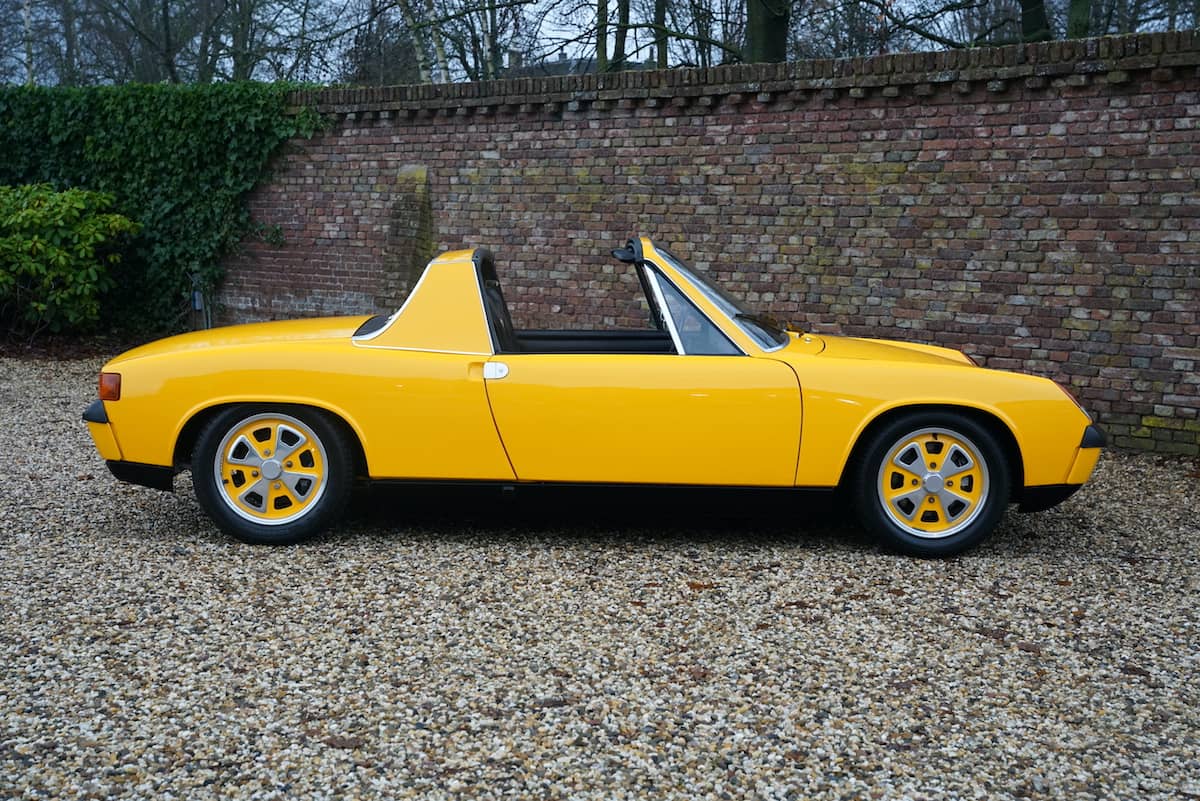 With that in mind, have you considered the left-field choice - the Porsche 914 you see above?

Only 118,000 of these mid-engined, two-seater Targas were made from 1969 to 1976, and if you thought the 911 had an interesting backstory, wait until you read more about the turbulent gestation period the grandfather of the Boxster endured…

Thanks to our friends at Gallery Aaldering, we’ve put together this story to help you decide whether the 914 is the air-cooled Porsche for you.

What’s more, we’ve done our best to quash the notion that the 914 is not a “proper Porsche” - remember, detractors also said about the 996 and the Boxster - because it very much is…

Is the Porsche 914 a real Porsche? 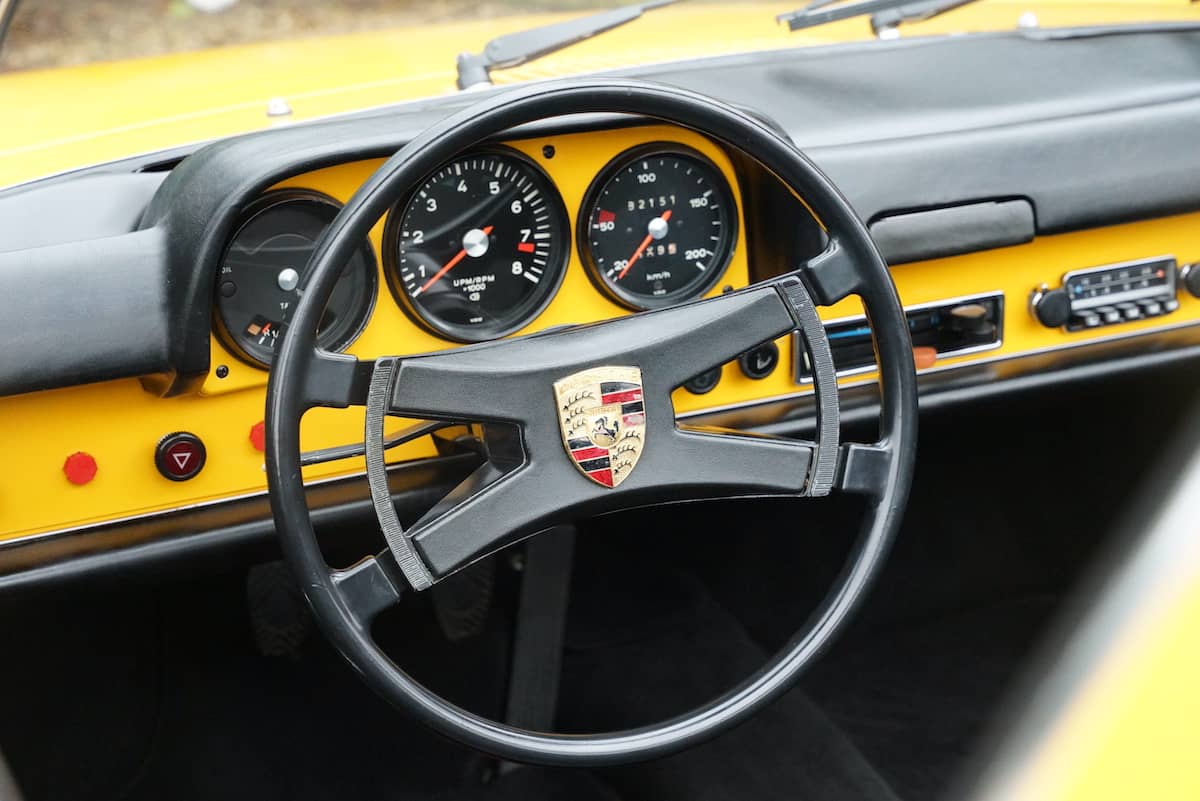 Like in the early Porsche 911, there are no driver distractions in the minimalist cabin of the Porsche 914
© Gallery Aaldering

The 914 is very much still a proper Porsche, as it was developed by Porsche under Ferdinand Piëch. Its six-cylinder engine was taken from the Porsche 911 T, and cars with the six-cylinder unit were built at the Porsche factory at Zuffenhausen. Things, however, get a bit tricky here. The 914 was a joint project between Volkswagen and Porsche. Dating back to Porsche’s founding in the 1930s, VW verbally contracted the Stuttgart-based carmaker to carry out the bulk of its development work. Due to the length of the agreement between the two German automotive giants, the 914 was set to be the last of these co-projects. VW needed a replacement for its Type 34 Karmann Ghia, and Porsche needed an entry-level car to take over from the 912. It was decided between Porsche and VW, that Porsche would sell the six-cylinder cars as Porsches, and the four-cylinder cars would be sold as VWs. Porsche management took a dim view of this approach, and decided that all cars aimed at the North American market would be sold as Porsches. In Europe, the 4-cyl cars were sold as Volkswagen Porsches through VW’s European dealer network. Clear as mud, right? But this is Porsche - the oddball company who has persisted with the 911 for nearly 60 years and made it the go-to driver’s car. Looking through Porsche’s lengthy back catalogue, there’s never been a bad Porsche whether it be a 911, a Boxster, a Panamera, a 928, a 944, or a very early 356. The 914’s featherlight kerbweight of 950 kilograms, rear-wheel drive layout, and eager mid-mounted boxer engine makes it more than worthy of the famous Porsche badge.

Did the Porsche 914 have a Volkswagen engine? 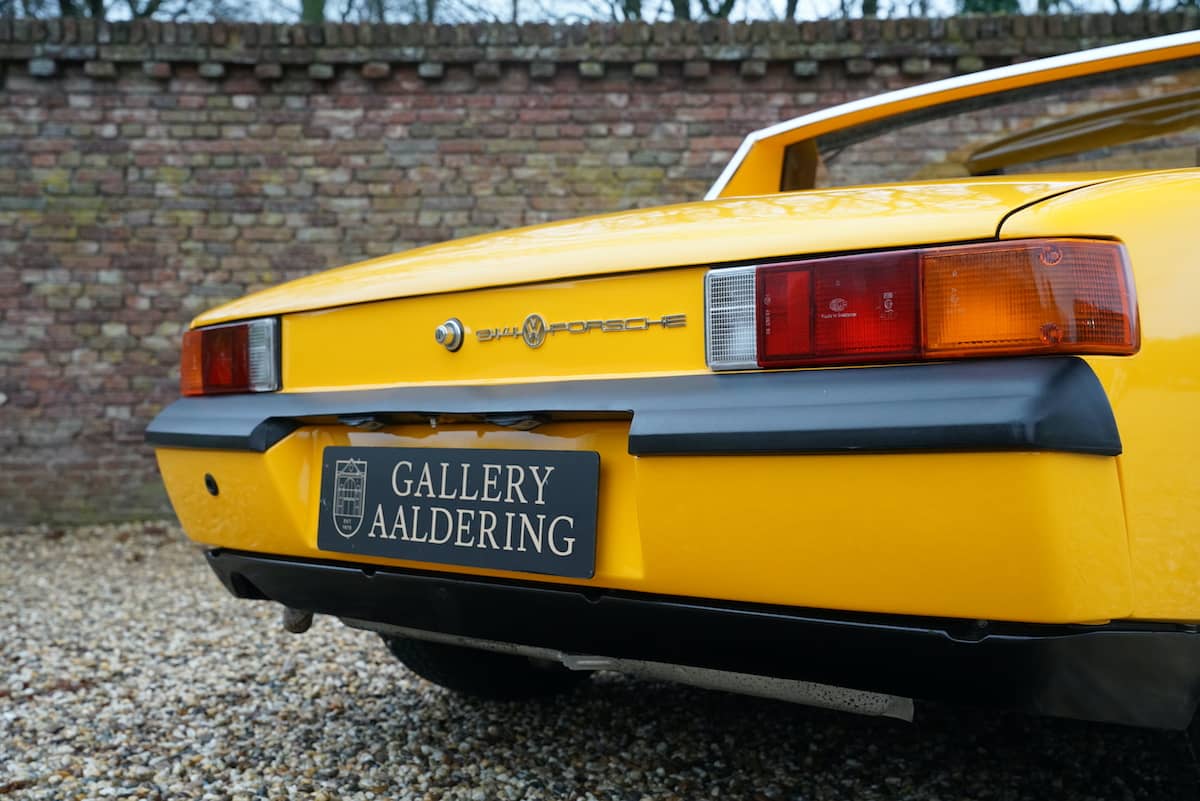 Is the 914 as fast as an early era, naturally-aspirated air-cooled Porsche 911? 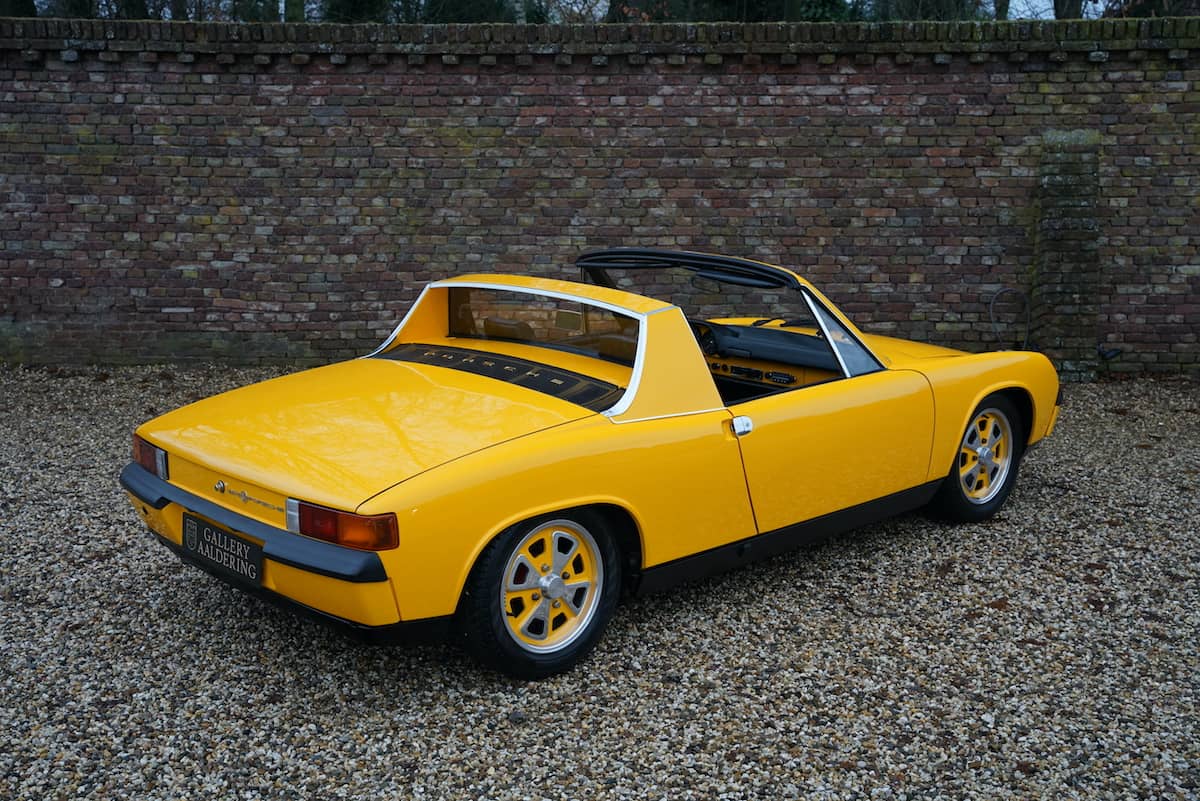 The quickest 914 was the 914/6, which had 110bhp and a top speed of 129mph. These are comparable numbers to the early 2.0L 911s. The fastest non-homologation, naturally-aspirated 911 of the 914 era was the 3.2L flat-six, which could produce up to 228bhp. Ultimately, none of this matters. History has shown us that small, light cars do not need heaps of power to be enjoyable. All they need is a good chassis, which, being a Porsche, the 914 certainly has. Further cases in point include the Mazda MX-5 (or “Miata” if you don’t live in Europe), the FIAT X/19, the 914’s grandson, the Porsche Boxster, the Lotus Elise, and the Toyota MR-2.

Was the 914 a mass-produced model by Porsche? 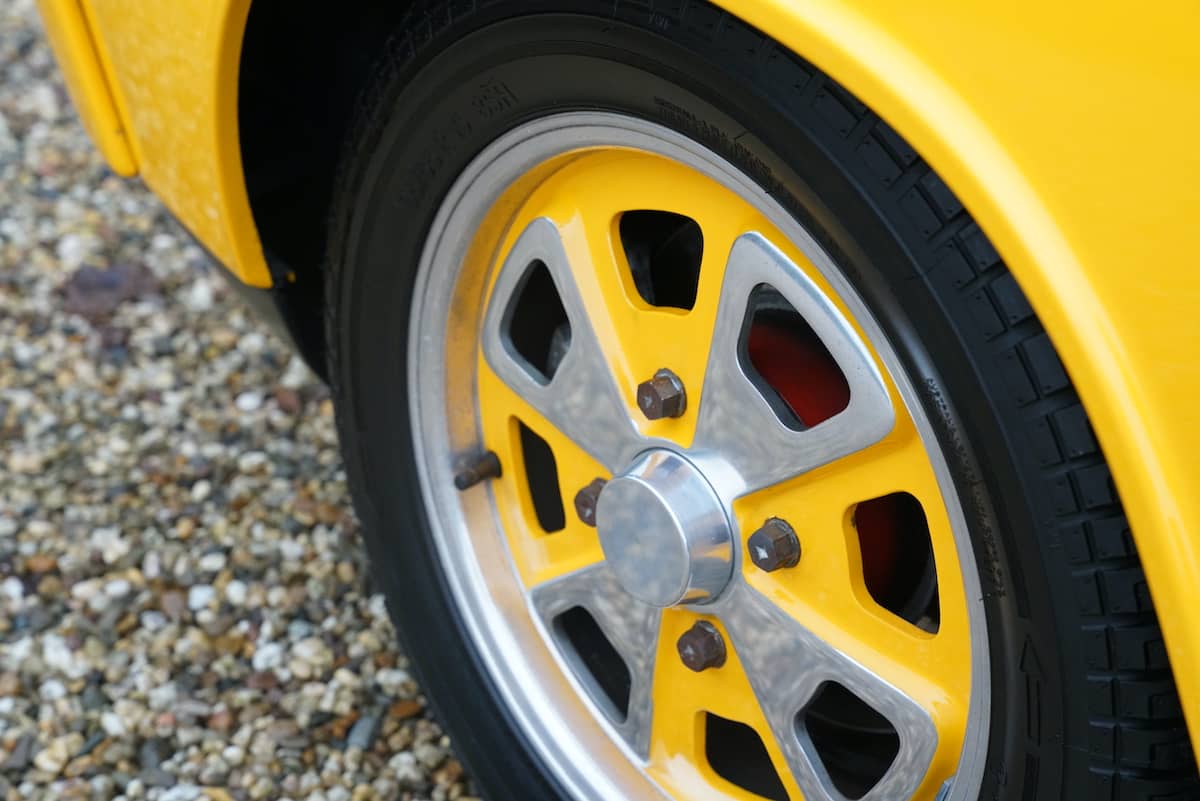 Spend a little bit more, and you too could own a Porsche 914 riding on steelies like these
© Gallery Aaldering

How much would a Porsche 914 cost me today? 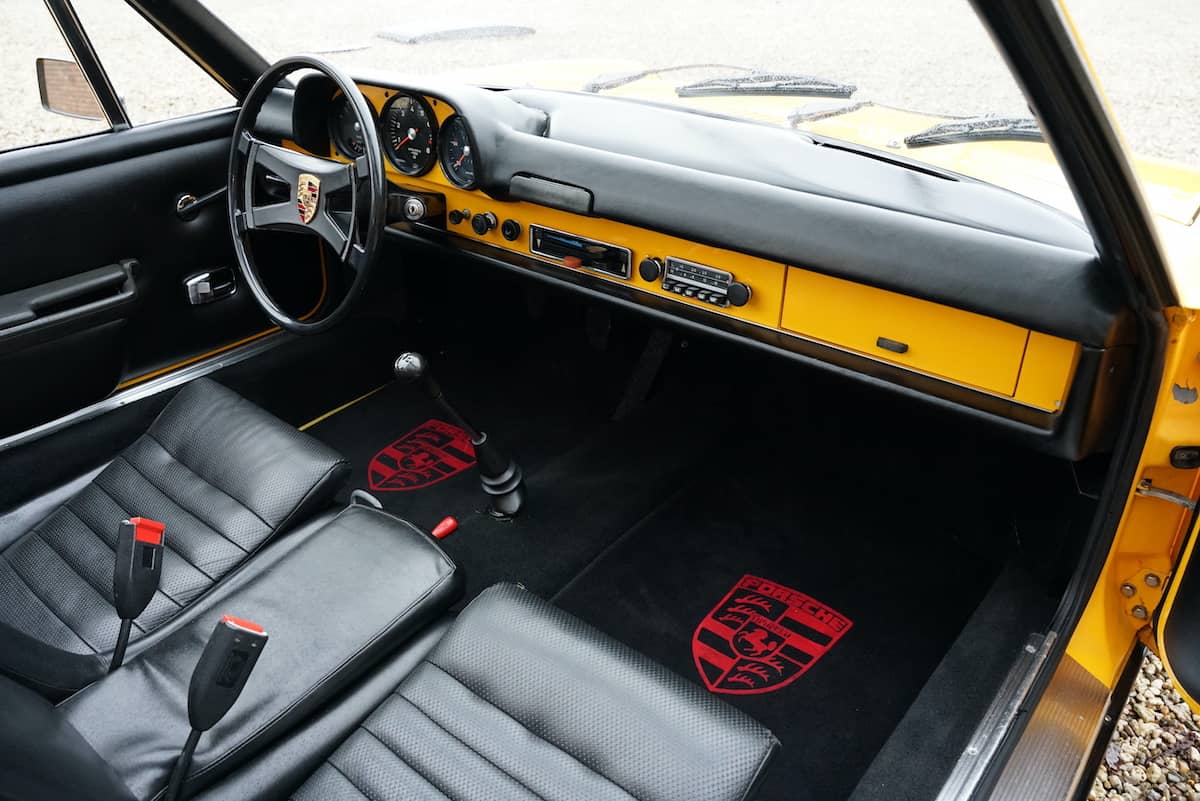 Our estimates show that a 914 can be picked up for as little as around EUR 10,000. However, please note that these cars will need a lot of love and investment to restore them to their original glory. A tidy 914 sits around the EUR 25,000 mark. For something fully restored in Grade A condition such as the 1969 914/5 you’ve been looking throughout this story, expect to pay upwards of EUR 30,000. This car - for sale with Gallery Aaldering - is marked up at EUR 38,950. 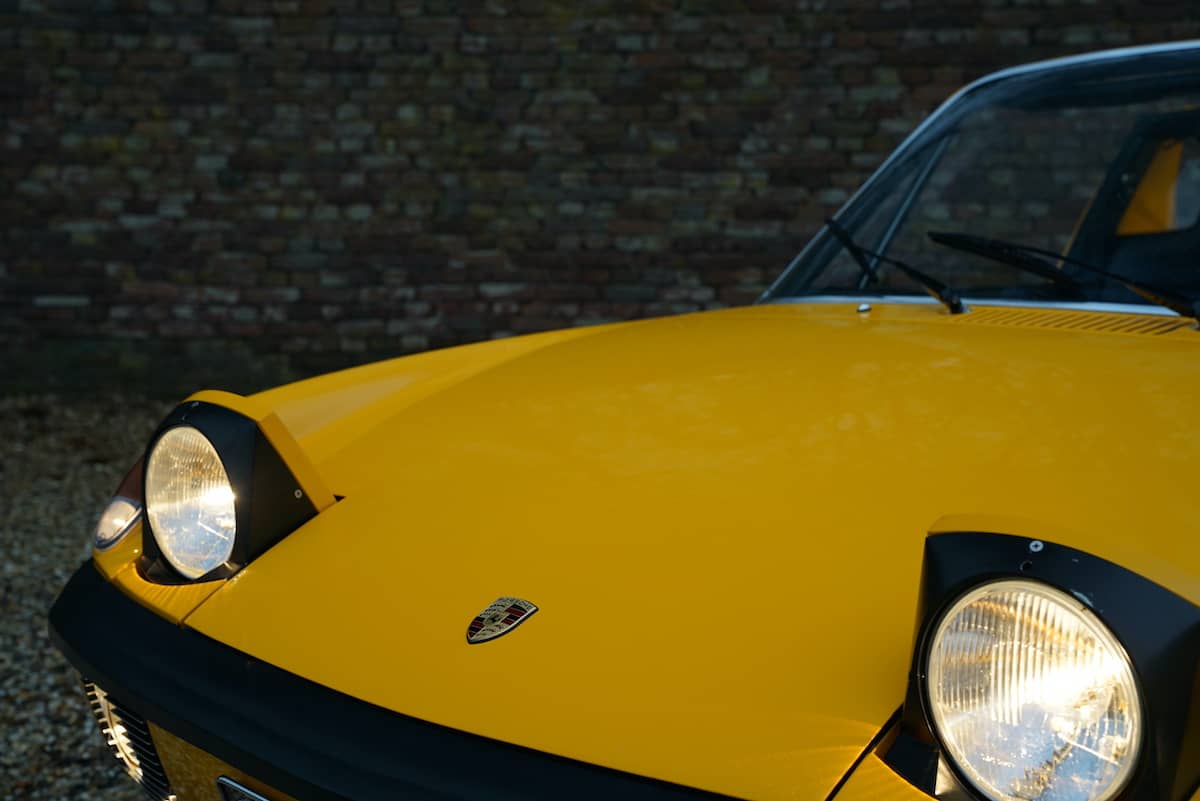 Pop-up headlamps. The Porsche 914 has them. This should be a selling point!
© Gallery Aaldering

This all depends on what kind of car you like. If you are looking for a small, classic mid-engined sports car made by a pedigree manufacturer, then a 914 should rank highly on your list. What’s more, its complex history (this was not an easy article to put together - Editor!) and relative exclusivity for a Porsche means it’s a curiosity for those who like their cars to be a little obscure. Most importantly though, the 914 is an affordable way into air-cooled Porsche ownership. Oh, and did we mention pop-up headlamps?

A special thanks to Gallery Aaldering for allowing us to use the photos of this stunning early Porsche 914 for this story. To take a look through their entire catalogue of classics and youngtimers, click these three words.

Interested in owning a Porsche 914 these? Click here to browse the entire Porsche 914 listings for sale on Dyler!