This Week in Cars: Lotus Has Killed The Elise and The Exige - Long Live The King

After 25 years of service, the iconic Lotus Elise is no more. To truly mark the end of an era, the Elise’s hardcore, coupé cousin, the Exige, will be axed too.

When it launched in 1996, the Elise captured the hearts of driving enthusiasts and the motoring press alike for being “somewhere between a Caterham and a Porsche”.

Like every good Lotus that came before it, the Elise’s party piece wasn’t hinged around power. The magic lay within lightweight construction and a chassis tweaked by the engineering wizards at Lotus’ Hethel HQ. The result? Handling and a drive that was matched by very few other sports cars around.

It’s no surprise then, that the Elise and the Exige had earned their stripes as classics of the future .

Yet as car manufacturers began their shift towards greener power sources such as hybrid engines, electricity and in the case of Toyota, hydrogen, the Elise and the Exige began to figure less and less in Lotus’ future plans.

Don’t get me wrong, this is sad, as both cars were and still are tremendously engineered, driver-focused machines.

Yet don’t despair, because Lotus is ensuring that both the Elise and the Exige go out with the bang they deserve. This is thanks to a limited final run of both cars called the Elise Sport 240, Elise Cup 250, Exige Sport 390, Exige Sport 420 and Exige Cup 430, whose power outputs and driving credentials are reflected in their names.

What’s more, amidst Brexit doom-and-gloom and the ongoing COVID-19 pandemic, the future of Lotus is genuinely something for the British motoring industry and the wider car world to look forward to. The company has already confirmed three new models for 2021: its all-new, 2000bhp Evija hypercar, the intriguingly-named 131, and a tie-up between itself and Alpine for an all-electric sports car, are all on the cards from late-2021 onwards.

There are also rumours of an all-new Esprit. Given that I believe the Giugiaro-penned Esprit S3 Turbo to be the definitive piece of perfect automotive design, I very much hope that’s true.

Anyway, our latest edition of This Week in Cars that you’re reading now isn’t just about the Elise. It’s a celebration of everything that’s great and good about Lotus. 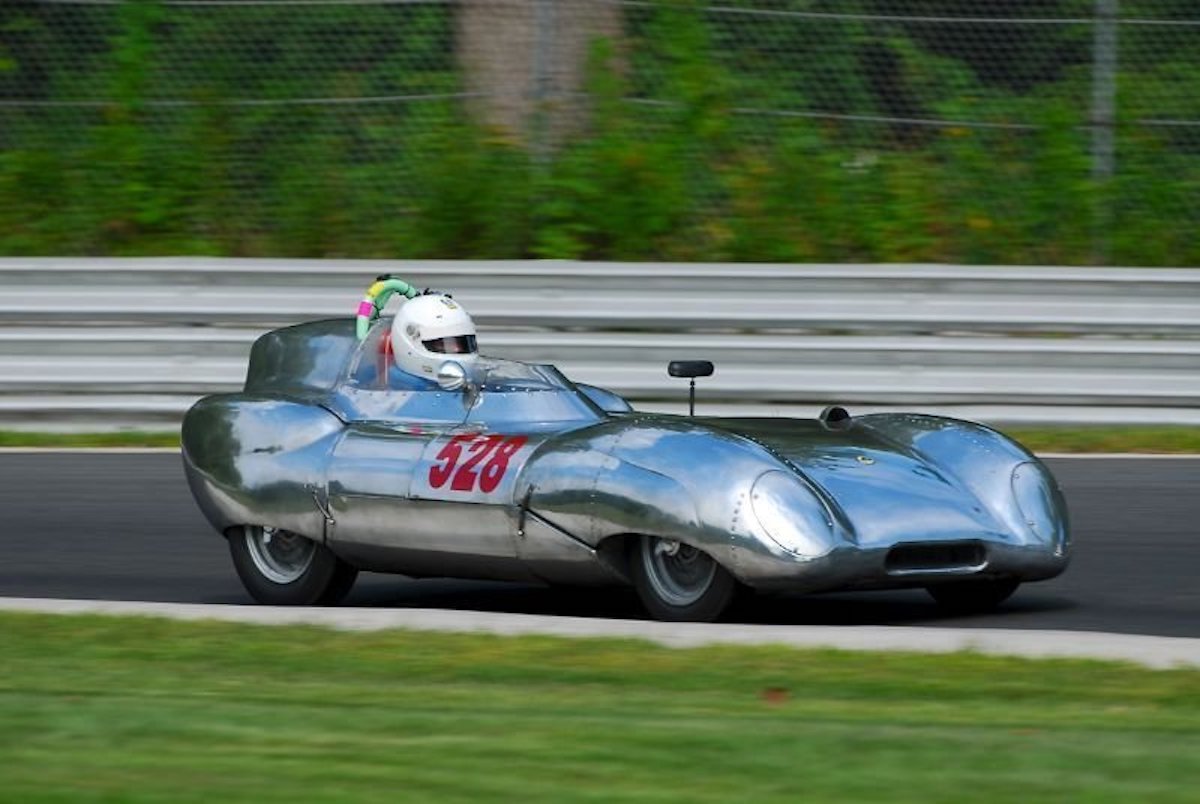 With 150 victories to its name, the Lotus Eleven is the most successful track car in Lotus history to this day
© Exceptional Car Broker

Introduced in 1956, the Lotus Eleven was the successor to the much-loved, yet-ageing Lotus Mk.6. When it broke cover, the Eleven’s aerodynamically-driven design penned by Frank Costin took the automotive world by storm, as Britain during the 1950s largely specialised in clunky Morris Minors, Wolseleys, and Many Other Cars from The Midlands. The Eleven was as fast as it looked, too, thanks to an ultra-lightweight tubular chassis that weighed in at a featherweight 31 kilograms and a series of engines that ranged from 1100cc on the roadgoing Sport model, to a 1500cc unit on the range-topping, race-ready Le Mans edition. The Le Mans edition also came fitted with Girling brakes, a de Dion axle, and a four-speed manual gearbox to ensure it was track ready out of the box. From 1956 to 1958, the Lotus Eleven won a staggering 150 races including class victories at the Le Mans 24 Hours of Le Mans, and further wins at Sebring, Monza - where it set a class lap record in the hands of Stirling Moss - and the Mille Miglia. To this day, the Lotus Eleven remains the most successful track racing car in Lotus history in terms of victories. 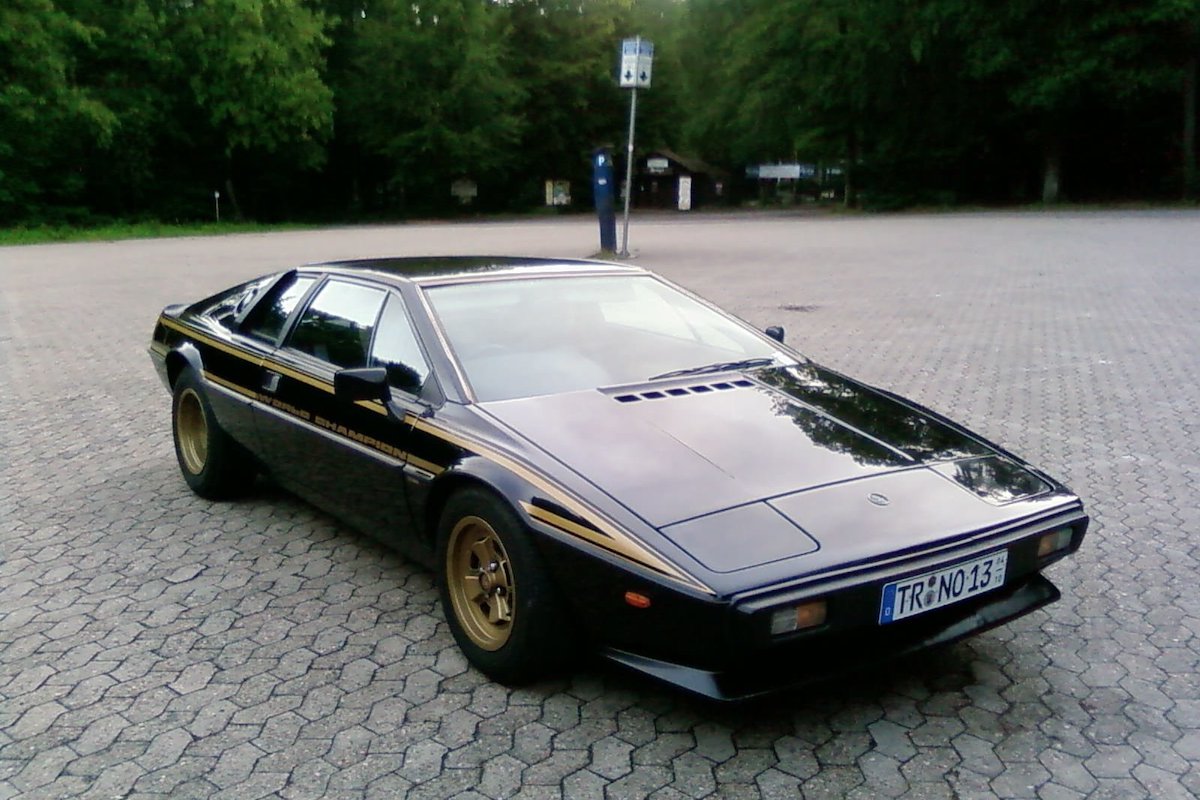 Only 100 or so of these JPS special edition Lotus Esprit S2s were made
© Dyler.com

If you are of a certain age like me, then you will forever associate the early Lotus Esprit with its role in the 1977 James Bond caper, The Spy Who Loved Me. Whilst the association helped matters, the Esprit S1 and S2 would be cool cars nonetheless. Just drink in its Giugiaro-designed shape, and try to find a sports car that’s aged better. To give it a few further cool points, during the 1970s when the S2 came out, Lotus was somewhat of a Formula 1 powerhouse and it took the drivers’ championships in 1970, 1972, and 1978. Lotus celebrated its 1978 title win with this special edition, “World Championship Commemorative Model” Esprit S2, of which around 100 were made. When Mario Andretti won the 1978 drivers’ championship, the team was sponsored by John Player Special (or ‘JPS’) cigarettes whose branding colours were black and gold. In 1979 when Lotus launched its “World Championship Commemorative Model” Esprit, JPS had withdrawn its backing from the team. Nonetheless, Lotus top brass rather liked the now-iconic colour scheme and kept it. Subsequently, these very rare S2s became unofficially known as JPS Esprits. 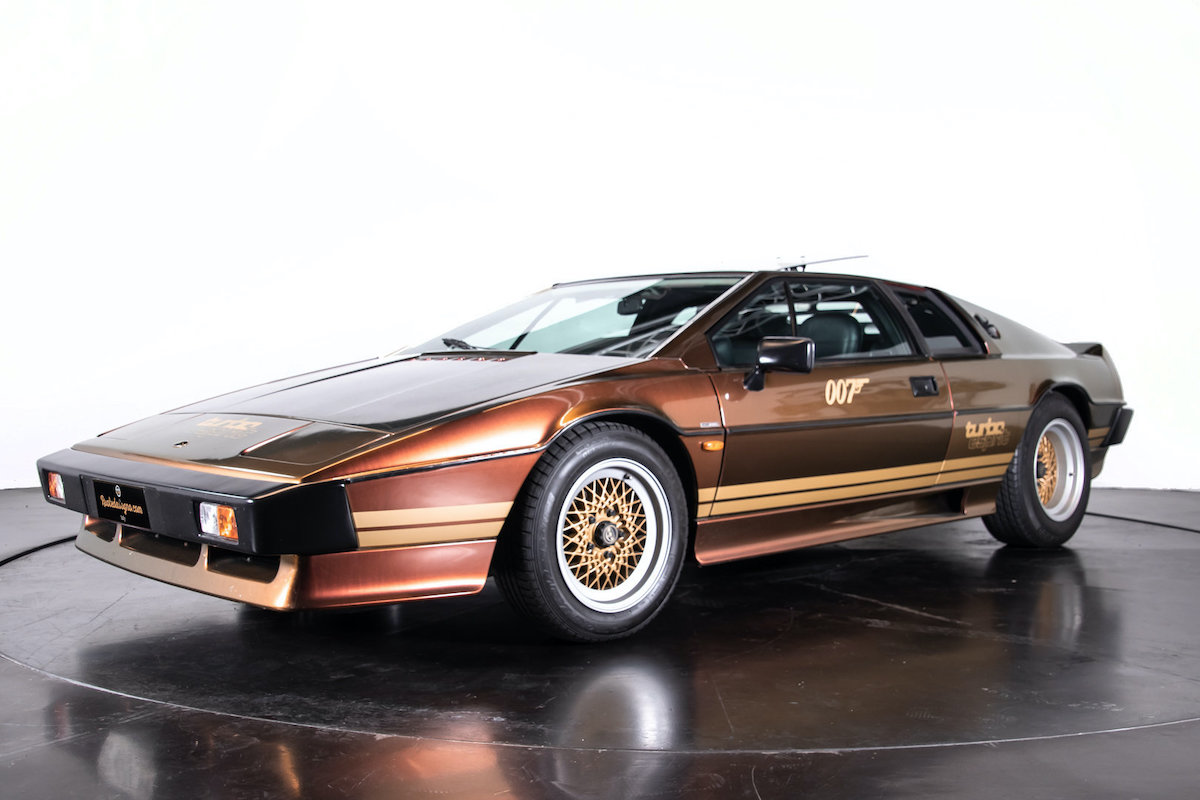 Does anybody do 1980s performance cars better than the Lotus Esprit?
© Ruote da Sogno

The Series 3 or S3 Lotus Esprit was the company’s first turbocharged production car. When it launched in 1981, the Turbo Esprit was a clear statement of intent by Lotus that it had Ferrari and Porsche firmly within its sights. The Lotus design wizards set about improving the car’s already-stellar handling by redesigning the chassis and rear suspension. Giugiaro also penned a more aerodynamically-efficient bodykit, which featured thicker, more aggressive bumpers, a rear lip spoiler, and improved airflow around the rear windows. With the addition of 15-inch BBS alloys, the Turbo Esprit looked spectacular and to this day, it remains a Giugiaro masterclass in how to combine style with aggression. The in-line four 2.2-litre turbo engine produced 210bhp and a claimed top speed of 152mph, which meant that at last, Lotus’ performance car finally had the performance to match its sublime handling. Oh, if you’re wondering why the 007 logo is on the side of this car, here’s the reason - Roger Moore’s James Bond drove two Turbo Esprits in the 1981 film, For Your Eyes Only. The initial car, a white Turbo Esprit with red detailing was blown up by some bad lads in tracksuits. It was then replaced by a bronze over gold car identical to the one you see here, and driven by Sir Rog to Cortina d’Ampezzo for a spot of skiing. 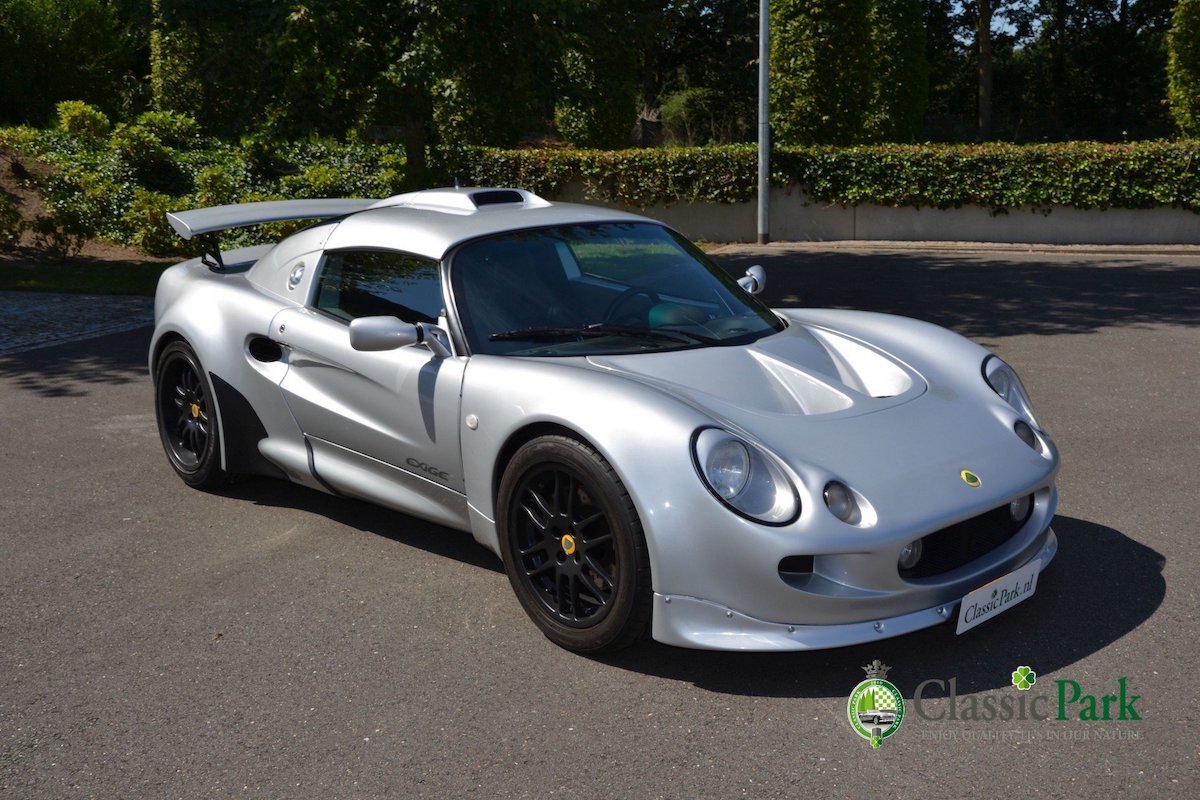 If it seems strange to think that the Lotus Elise has been around 25 years now, it’s even stranger to think that its more hardcore, track-focused coupé cousin - the Exige - has been around since 2000. The S1 was the Exige in its rawest form. By no means was the Exige a luxurious thing in its standard guise, but when it came to creating the S1, Lotus pushed the “simplify, and then add lightness” mantra of its founder Colin Chapman as far as it could within the realms of the law. Inside, the Exige S1 is all bare metal and racing seats. This was done to keep weight down, and to help its driver extract the best out of the oh-so-sweet chassis, and the peppy, naturally-aspirated, mid-mounted 1.8-litre K Series engine that Lotus borrowed from Rover. From the Series 3 Exige onwards, Lotus upped the power with the addition of a supercharged 3.5-litre Toyota V6 used in the larger Lotus Evora sports car, but now - after more than 20 years - there are few things that can still come close to the original Elise and Exige for naturally-aspirated thrills. 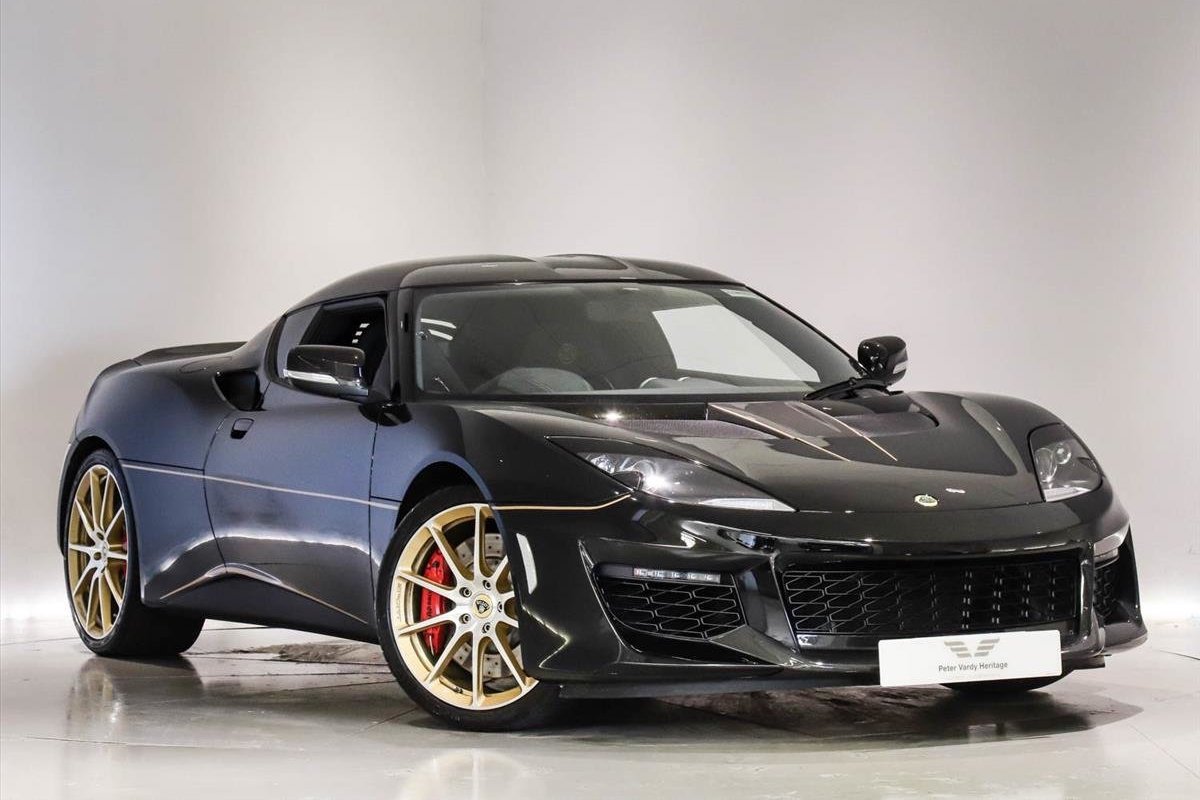 Like the Elise and Exige, the Lotus Evora will be no more as of 2021. In its standard guise, the Evora has been around since 2010. However, the 410 Sport version you see here was commissioned in 2018 to mark the brand’s 70th anniversary. To celebrate seven decades of Lotus, Hethel took a bunch of its flagship-yet-hardcore Evora 430s, toned down their aggressive shape, and added some carbon fibre to ensure it was still light. Despite being firmly aimed at the likes of the similarly driver-orientated Porsche 911 Carrera T, the Evora 410 Sport still remains to be comfortable over long distances, and it’s not a chore to drive in town. Despite being seemingly docile compared to other Lotuses past-and-present, it is still capable of 191mph when specced with the standard six-speed gearbox. Will it be missed like the Elise and the Exige? Only time will tell.