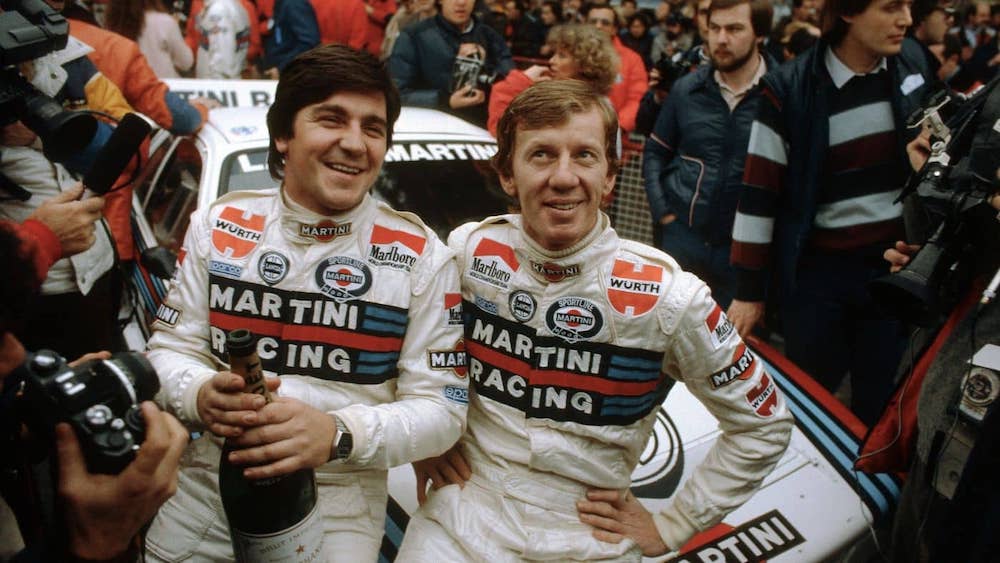 Christian Geistdörfer, the 1980 and 1982 World Rally Championship co-drivers’ champion, believes 2022 WRC title winners, Kalle Rovanperä and Toyota Gazoo Racing, are the favourites to take victory at this year’s Rally Monte Carlo - the opening round of the 2023 WRC season, which started on January 19.

However, Geistdörfer feels that the experience of drivers such as Rovanperä’s Toyota teammate, nine-time WRC champion Sébastien Ogier, 2019 title winner, Ott Tänak, and 17-time WRC event winner, Thierry Neuville, could all prove a thorn in the side for the young Finn who is seeking his debut victory on the French Riviera.

Speaking exclusively to Dyler.com, Geistdörfer explained that his reasoning for marking Rovanperä as the overall event favourite is because he feels the 22 year-old’s precise style of driving echoes that of Walter Röhrl; the two-time WRC title winner Geistdörfer partnered as a co-driver from 1977 to 1987.

Röhrl is also widely-considered by many to be amongst the greatest all-round drivers in motorsport history. 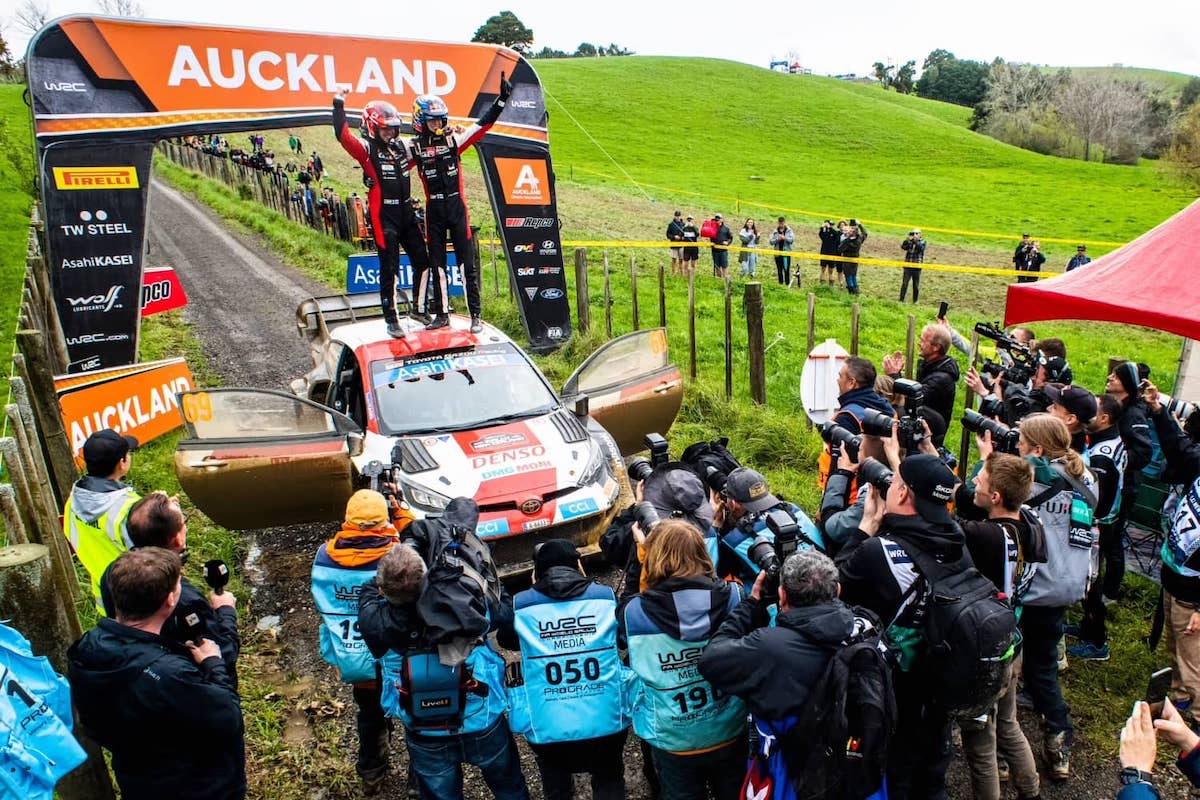 “I think it would be silly to bet against our current champion, Kalle [Rovanperä],” Geistdörfer explained. “When he drives, he has this lightness in his style that makes everything look like he’s taking it easy.

“Kalle is always driving the car very calmly, and his inputs look like they are in super slow motion. This way of driving reminds me very much of Walter Röhrl, because neither of them seem to be pushing too hard. With this approach, the car goes where they want and they make little-to-no mistakes.

“Kalle is always driving the car very calmly, and his inputs look like they are in super slow motion. This way of driving reminds me very much of Walter Röhrl”

“I’m very impressed by Kalle, because last year he showed he knows how to win on every surface - gravel, snow, and tarmac. However, in terms of years, he doesn’t have the same amount of Monte Carlo experience as Ogier in the Toyota, Tänak in the Ford, and Neuville in the Hyundaiw who have been around for around a decade or even longer.

“It will be interesting to watch if Kalle can beat these guys on pure pace alone, because knowledge at Monte Carlo is just as important as being fast.” 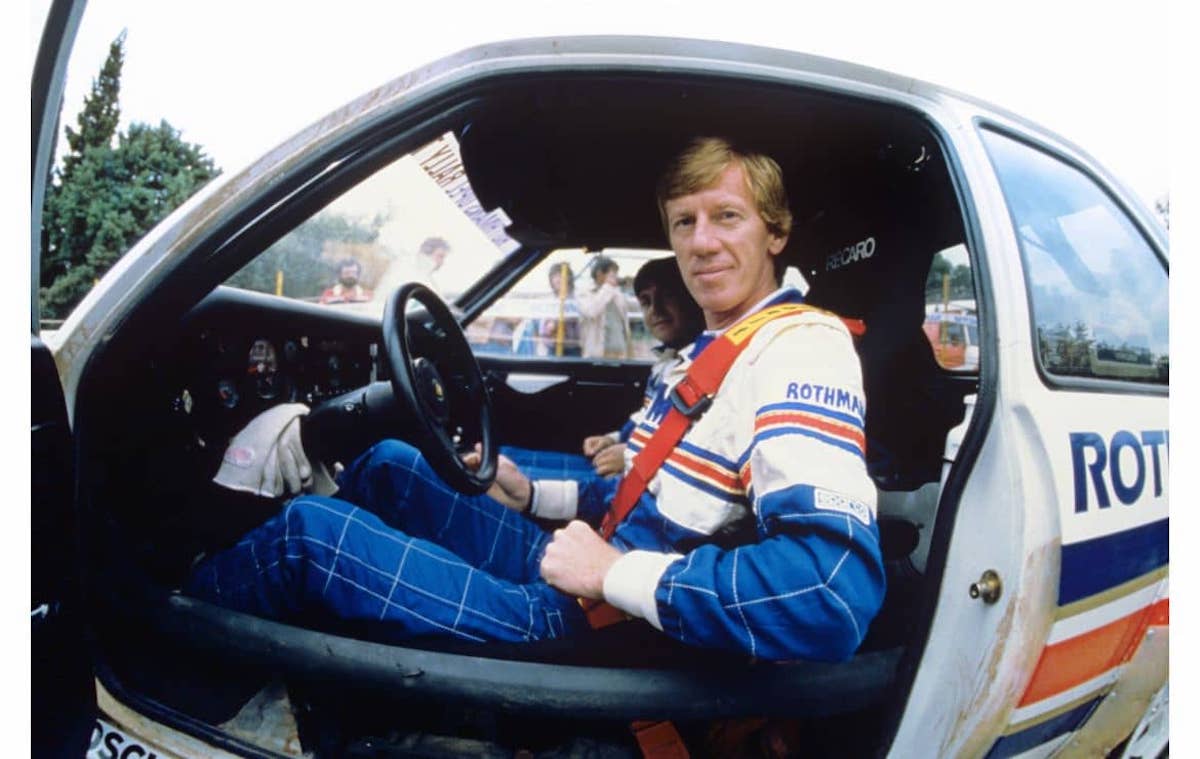 Walter Röhrl took his second WRC title in 1982 with an Opel Ascona, and the German is widely considered to be one of the most complete racing drivers of all-time
© Stellantis Media

And Geistdörfer knows what he’s talking about. Monte Carlo is an event that he knows how to win. And he’s won it more than once.

A testament to the Röhrl/Geistdörfer partnership is that each of their four Monte Carlo wins were taken in different cars.

“The [Lancia] 037 weighed less than 1,100 kilograms, and when you see one in real life, it’s actually very small. It’s beautiful”

The only other driver to have achieved the same feat is nine-time WRC champion, Sébastien Ogier, who has won the event with Volkswagen, Ford, Citroën, and Toyota.

But now back to Geistdörfer.

Whilst he and Röhrl are largely associated with the Audi Quattro, it’s the 1983 Monte Carlo victory with the Lancia 037 that Geistdörfer cites as his favourite. 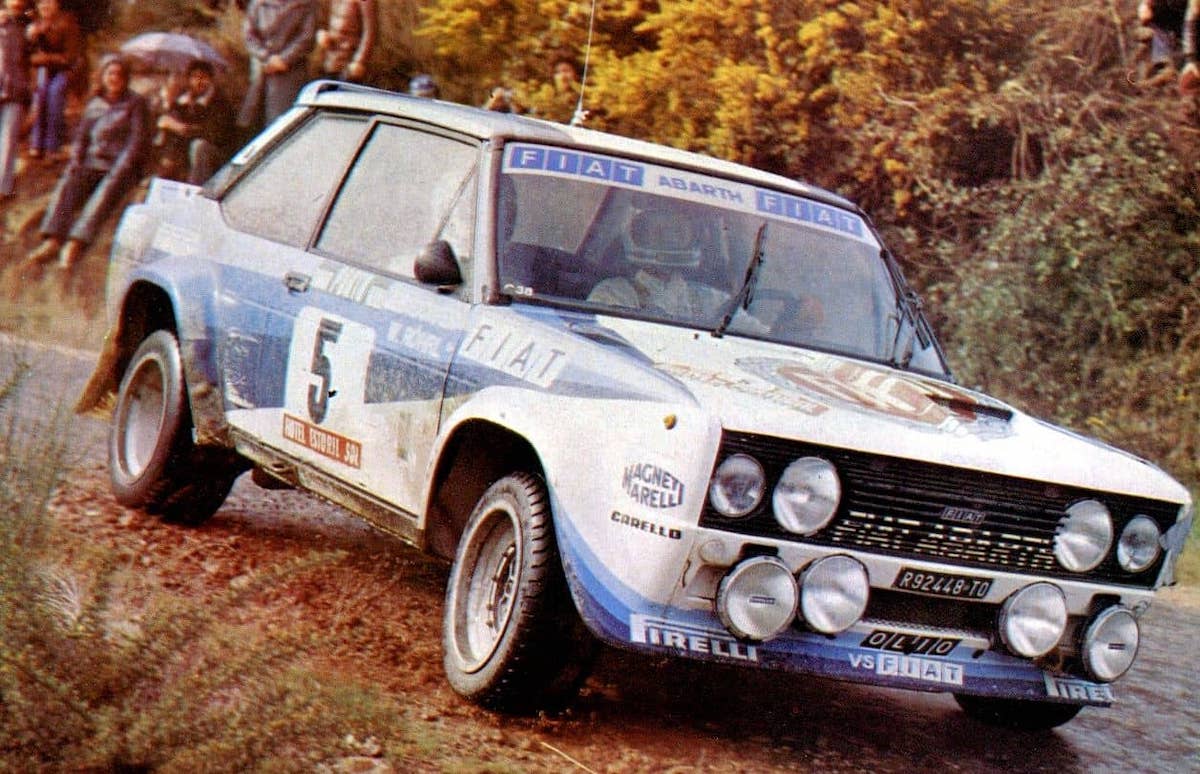 The pairing of Walter Röhrl and Christian Geistdörfer won their maiden World Rally Championship with the FIAT 131 Abarth in 1980; a team they would return to within a few years following its rebrand to Lancia
© Pinterest

“The thing with the Lancia [037] was that it represented a homecoming. We left FIAT at the end of 1980 and had agreed to return to the team by 1983, but by then it had become Lancia,” he explains on the 40th anniversary of one of the greatest WRC wins of all time. “The team was still based in Turin, Cesare Fiorio was still running the team, and Giorgio Pianta - a superb test driver I’d known for many years from our FIAT days - was in charge of the 037’s development, and what a car he created!

“The 037 weighed less than 1,100 kilograms, and when you see one in real life, it’s actually very small. It’s beautiful. The engine developed by Gianni Tonti - one of our engineers - was also superb. It was a mid-mounted, 2.0-litre compressor engine which gave us very good torque at low-revs with zero lag, because it didn’t have a turbo. 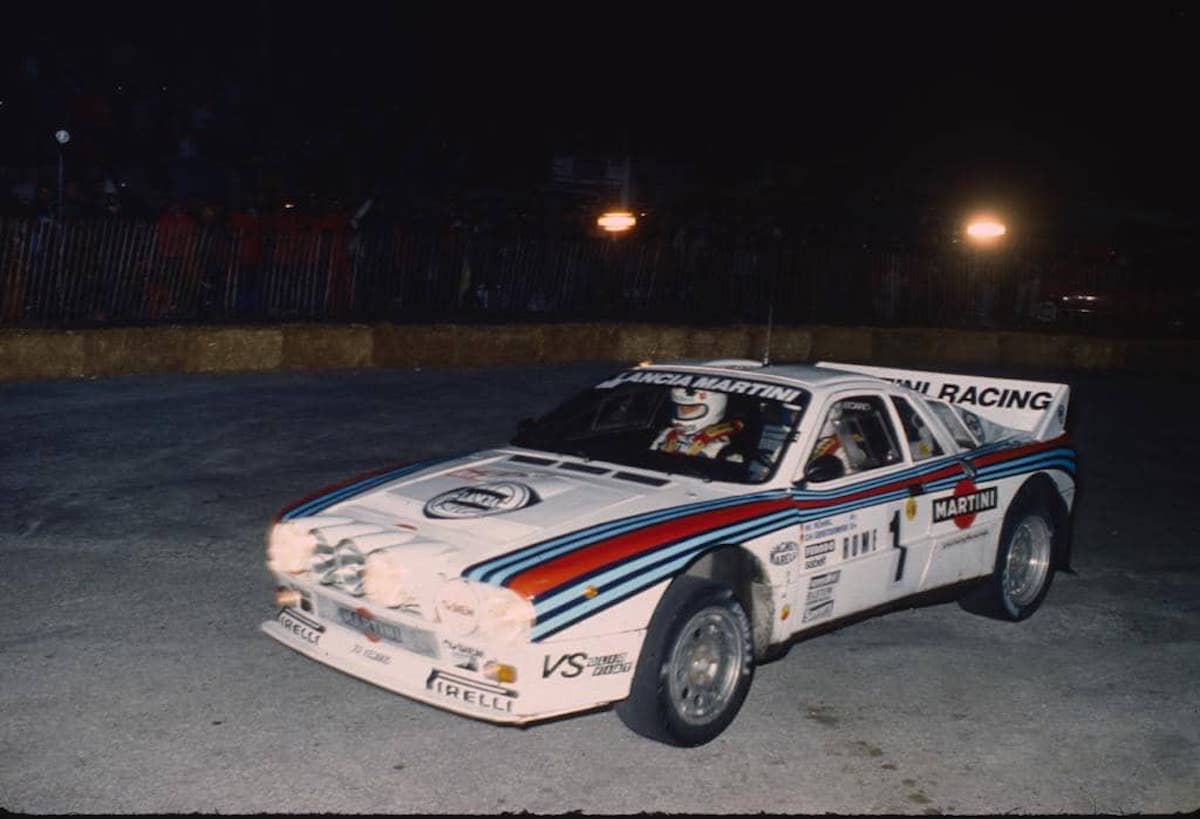 “As you’d expect, the car was very sensitive but it fitted Walter’s easy, drama-free driving style like a glove. There were a lot of arguments against us for making this little car out of fibreglass and kevlar, and a lot of people said “what if you have an accident, blah blah?”

“Well, the point is to not have an accident in rallying, is it?!” Geistdörfer smiles. “And honestly, out of six rallies we competed in during 1983, we didn’t have a single crash.”

Heading into the 1983 season opener at Monte Carlo, the Audi Quattros driven by Hannu Mikkola, Michèle Mouton, and Stig Blomqvist were the clear favourites.

The heavier, four-wheel drive German cars were certain to be far more sure-footed around the twisty and treacherous ice and snow-covered stages of Monte Carlo than the skittish, rear-wheel drive Lancia 037.

What’s more, Röhrl had only taken the driver’s title by a handful of points from Mouton the previous season, and Audi had still managed to clinch the constructors’ trophy. 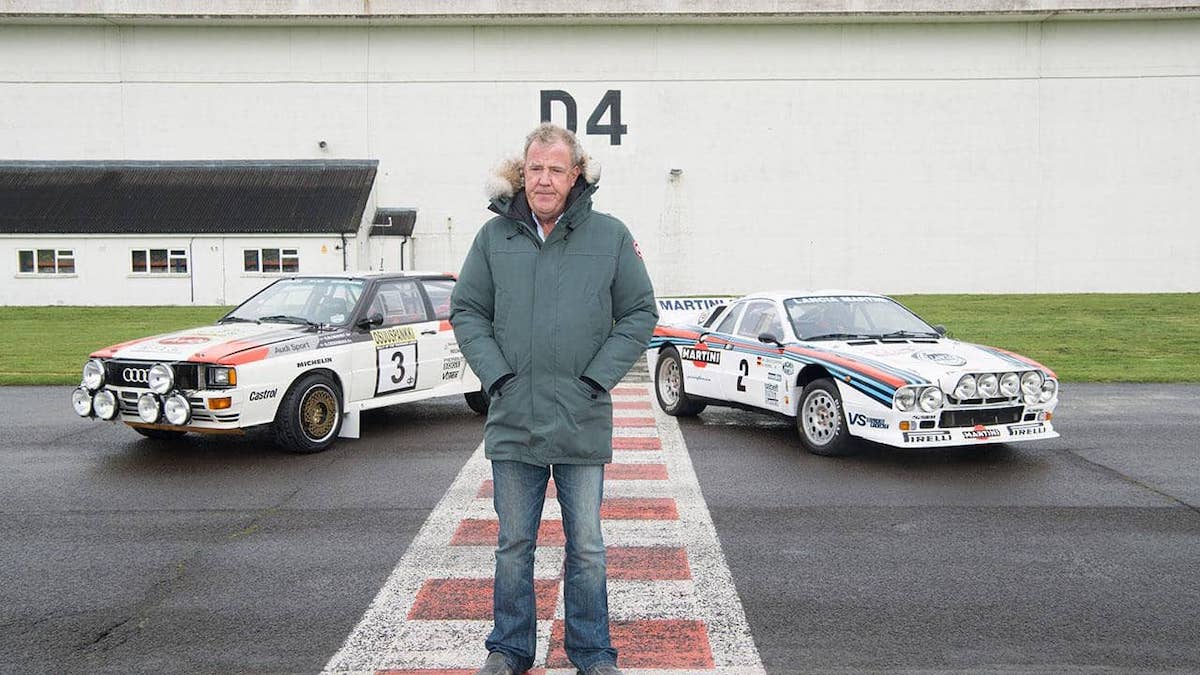 The battle between the Audi Quattro A2 and the Lancia 037 throughout 1983 was so intense, that it earned itself a feature-long segment on The Grand Tour
© Amazon Prime Video/The Grand Tour

But Audi didn’t win Monte Carlo 1983. In fact, only one Audi made the podium come the end of the rally, some 10 minutes behind the winning 037 of Röhrl/Geistdörfer, and some four minutes afield of the second-placed Lancia driven by Markku Alen and his co-driver Ilkka Kivimäki.

What Geistdörfer explains next is a piece of pure David vs. Goliath motorsport folklore. Despite all the Teutonic AWD might of Team Audi, it was the combination of Geistdörfer’s sharp thinking and Lancia’s know-how of the regulations that helped The Team From Turin to victory, whilst Ingolstadt left the French Riviera feeling more than a little embarrassed.

“There was nothing in the regulations at the time that said we couldn’t change tyres during the stage, so that’s exactly what we did!”

Like Geistdörfer and Röhrl, Lancia - in various guises - had been in the WRC since the early-to-mid 1970s. Audi? Since 1981. As Geistdörfer mentioned earlier in relation to Kalle Rovanperä, experience is just as important as speed when it comes to winning in Monte Carlo Rally. 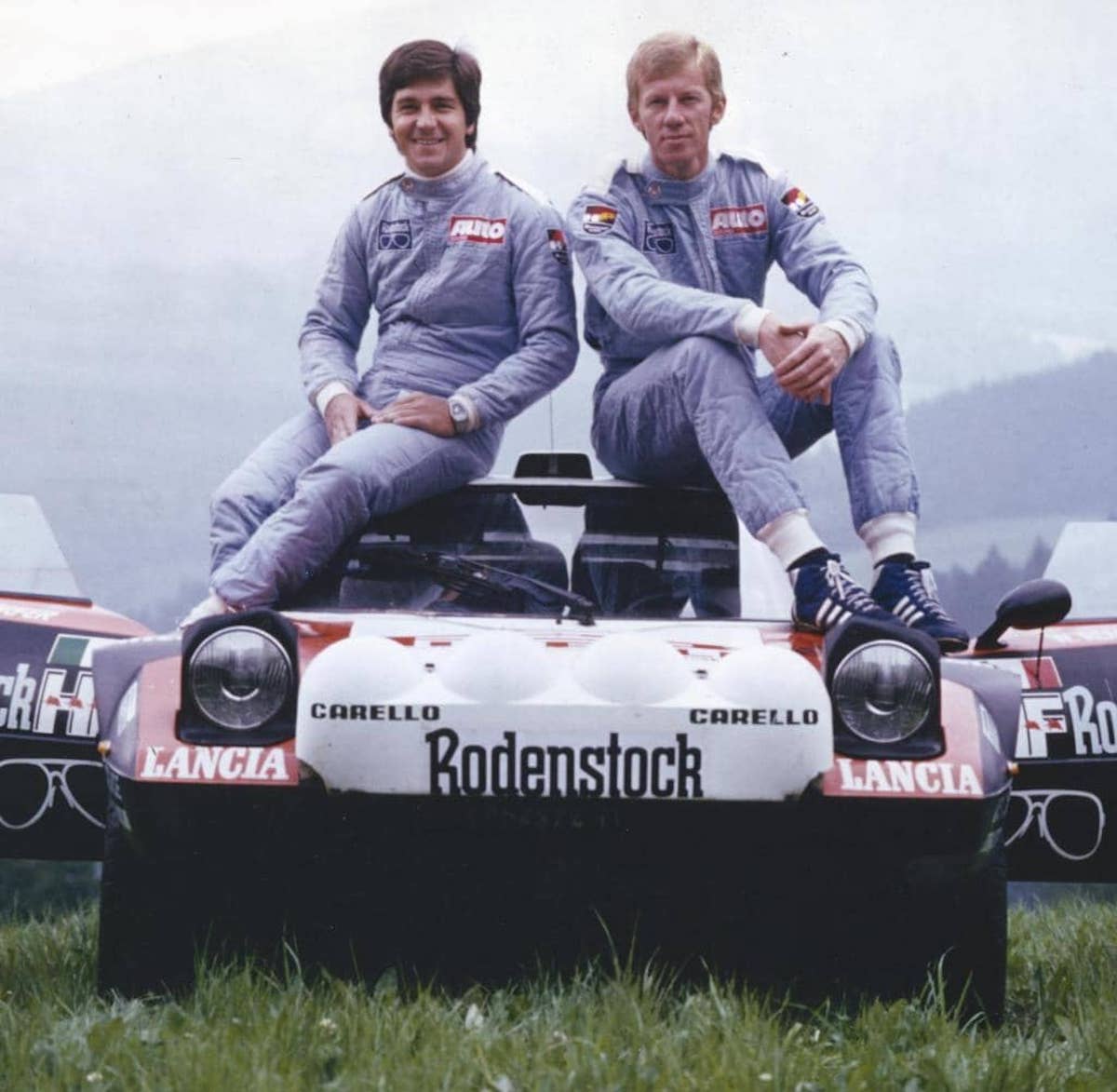 “There was nothing in the regulations at the time that said we couldn’t change tyres during the stage, so that’s exactly what we did!” recalls Geistdörfer. “As you know, Monte Carlo has a lot of mixed conditions, and we noticed that the second stage had a lot of snow and ice on the road surface because the organisers hadn’t snow-blown it for some reason.

“Anyway, after three or four kilometres into the stage, you came out onto a big main road that had been salted and was pretty much perfect for the slick Pirelli tyres we were using on our car.

“We made a really big spectacle of things too, because not only did we do this “pit stop” by the side of the road with the crew, there was also the service truck and everything waiting for us!”

“So, what did we do when this second stage started? We fitted slicks at the front and studded tyres at the rear for extra traction on the short section covered in ice and snow. 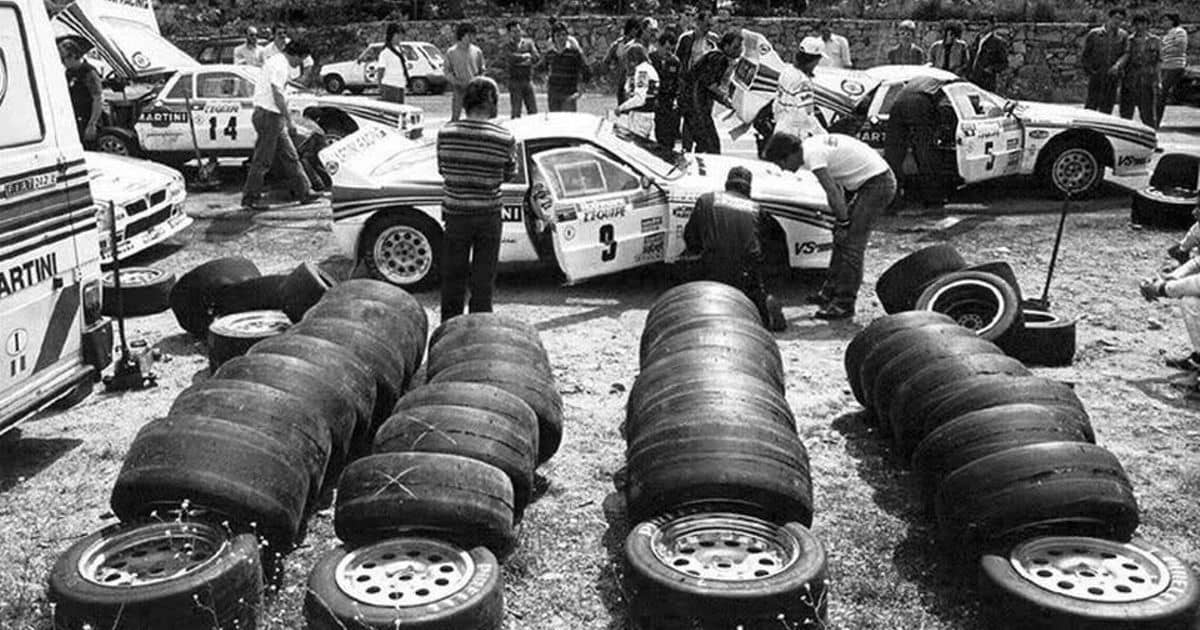 “Can you imagine trying to do something like that now?!” Geistdörfer laughs. “We made a really big spectacle of things too, because not only did we do this “pit stop” by the side of the road with the crew, there was also the service truck and everything waiting for us!”

Yet despite the theatrics cooked up by Geistdörfer and Lancia, it transpired to be a stroke of genius. Röhrl gained a net 35 seconds on that stage alone, and they would make a further three mid-stage tyre changes across the course of the 30-stage event to extend their advantage.

These occasions wouldn’t be the only time that Lancia operated within the grey area of the WRC’s then-sporting regulations. Once again working within the realms of the unwritten, Lancia lobbied the local authorities to salt the roads to more or less secure victory for Röhrl and Geistdörfer. 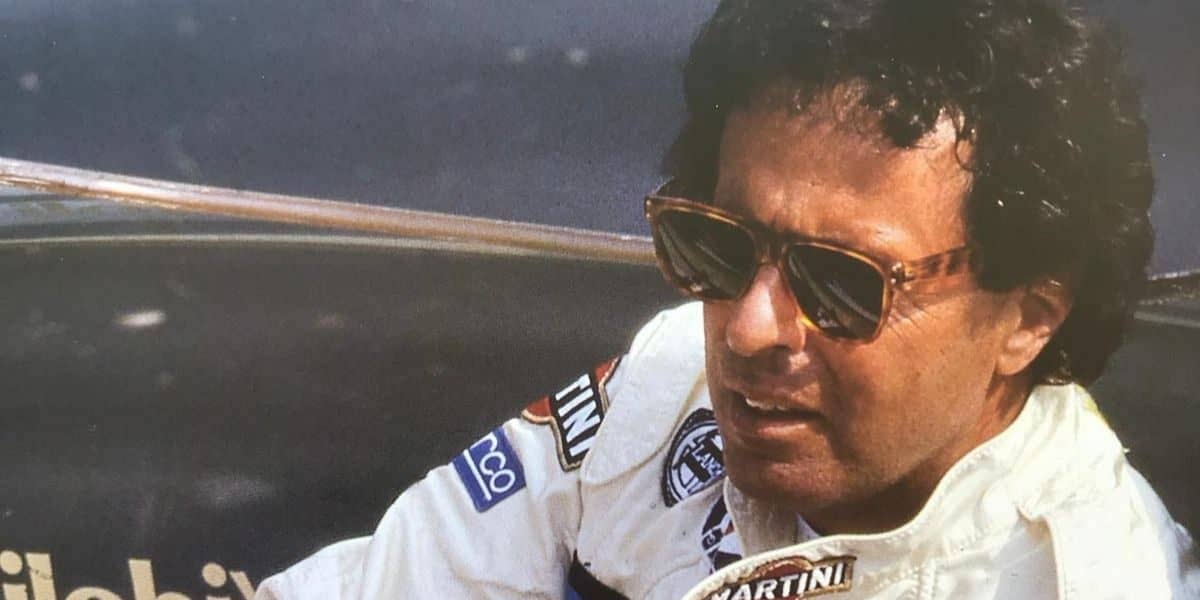 “On the last night of the rally, we were set to run a stage called the Col de la Madone,” Geistdörfer explains. “It starts quite far south and it’s mainly dry during the first half, but as you head further north it turns very quickly into this mixture of solid ice.

“We’d managed everything we possibly could to gain an advantage over Audi in this rally, and it was unthinkable that we could throw it all away in the last 14 hours of the event, because our mid-engined, rear-wheel drive 037 was completely unsuited to these conditions.

“It was unthinkable that we could throw it all away in the last 14 hours of the event, because our mid-engined, rear-wheel drive 037 was completely unsuited to these conditions.”

“Anyway, our team boss Cesare [Fiorio] convinced the local authorities who are responsible for taking care of the roads to salt them under the premise of “spectator safety” - after all, we’d get really close to spectators during those days, and safety wasn’t what it is now… 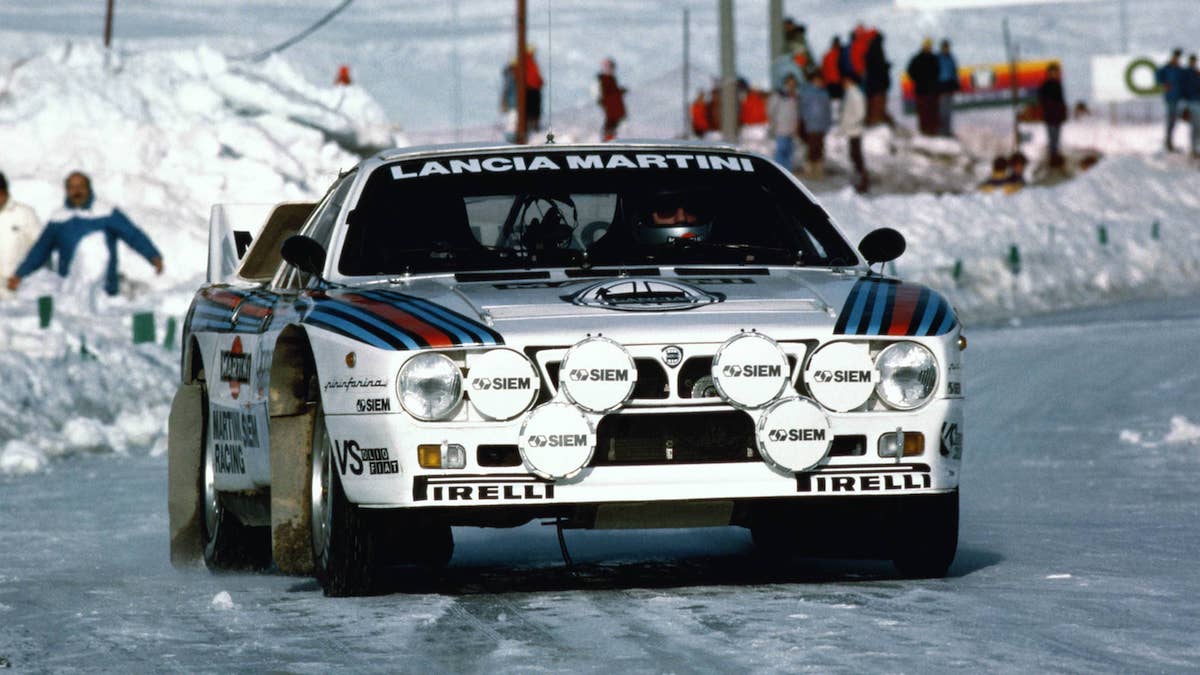 The Lancia 037 of Walter Röhrl and Geistdörfer took a legendary victory on the ‘83 Monte, and ended up winning the event by over six minutes ahead of the sister car driven by Markku Alén
© Pirelli

“The thing was though, the salt was just dumped on top of the road and if you want it to react with the ice and get it to melt, you have to really grind it in. So, what did we do?

“Some time before we were set to run the stage, everyone on the Lancia team with a driving licence somehow got hold of a car and drove that stretch of road repeatedly to ensure the ice had melted for us!

“Combine that with Walter’s skill and complete dedication to winning the rally, the conditions were absolutely perfect for us to take the win, which we did by about six minutes from Markku [Alén] in the sister car.”

“Audi largely lost that event for being too arrogant”

It’s been an outrageously enjoyable hour with Geistdörfer. Yet despite the sense of wonderment at how he, Röhrl, and Turin managed to beat Audi at an event it really should have won, the time spent listening to Geistdörfer has also been a valuable insight into the intellectual side of motorsport.

In short, whilst Audi was playing at checkers, Lancia was committed to playing three-dimensional chess. 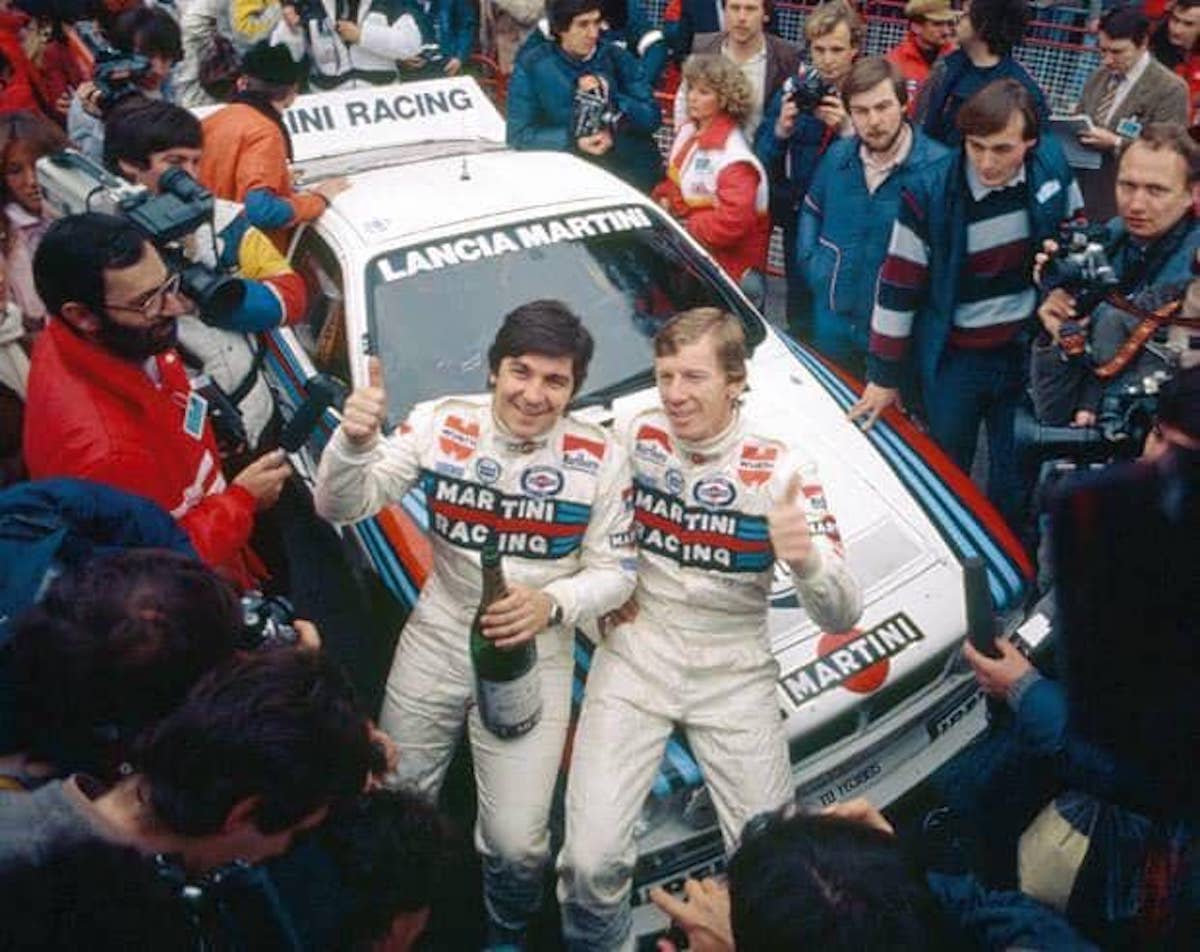 “Audi largely lost that event for being too arrogant,” Geistdörfer concludes with a smile. “They didn’t even bother sending a crew out to check the conditions for the Col de la Madone stage, because they were so sure it would be all ice, and they thought their Quattro would win easily.

They also clearly didn’t bother making the most out of the regulations either, and there was nothing written in the rules about anything we did, so what’s not written was not forbidden! Anyway, the FIA changed two years later…”

Dyler.com would like to extend a special thank you to Tazio Magazine and its staff for the introduction to Christian Geistdörfer.

In the meantime, if you would like to add a Lancia 037 or an Audi Quattro to your classic car collection, click the yellow words!