This week, we’ve found five iconic classic rally cars for the road that you’ll recognise almost immediately from the history books and guess what? They’re all up for sale on Dyler.com!

These machines were homologated with one goal in mind - to win rallies and championships. From the 1980s to the mid-1990s, that’s exactly what they did.

Some of the cars on this list also formed the basis of some of the quickest, outlandish, and recognizable rally cars in history, most notably the four-wheel-drive Audi quattro S1 and the twitchy, supercharged Lancia 037.

No list of modern classic roadgoing rally cars would be complete without these two cars, but what are the other three we chose for you? Well, to find out, you’ll have to scroll down a bit further!

Please don’t forget that all of these cars are for sale via our partner dealers. Should you wish to own a slice of old school WRC history, please contact the dealership by clicking the link next to LINK TO CAR AND DEALER to take your enquiry further.

Many thanks and enjoy the reading! 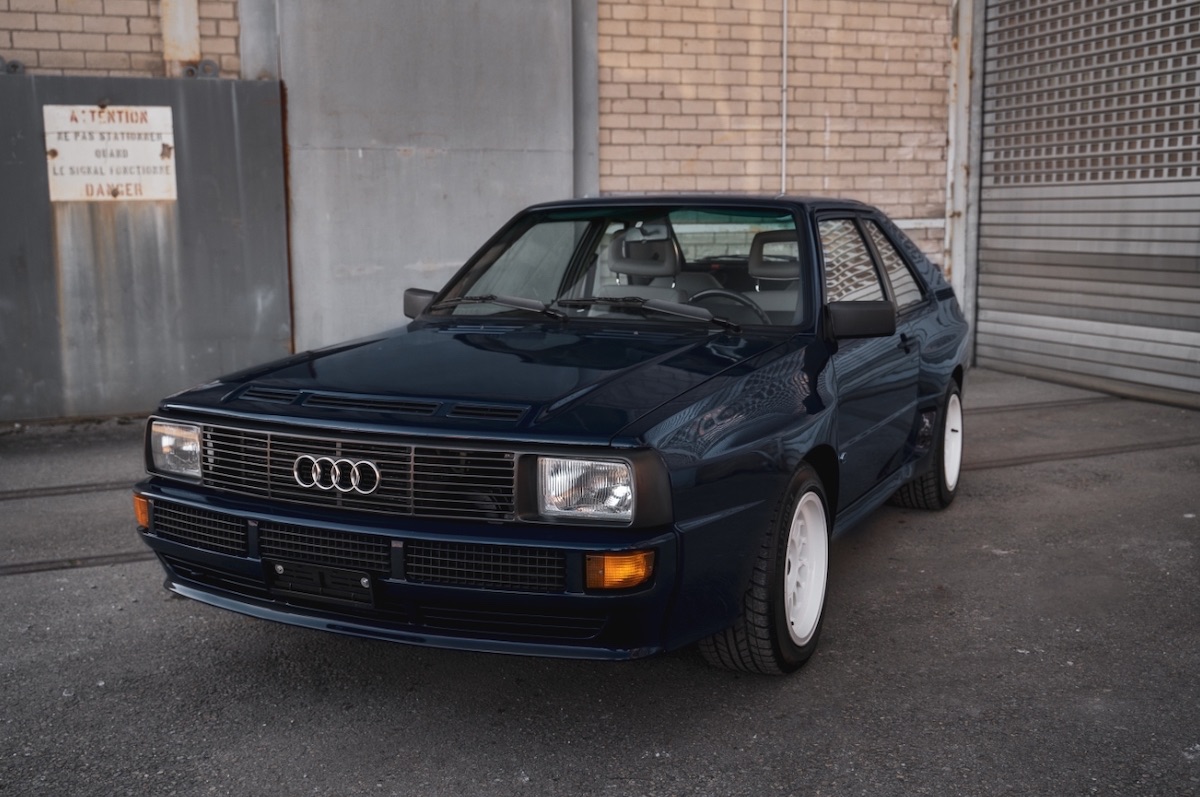 Along with the Ford Model T, Volkswagen Beetle and VAZ 2101, The Audi quattro is one of the most important cars in automotive history. Whilst it didn’t sell in numbers as high as the cars we mentioned previously, it revolutionised the world of motorsport. Audi engineers combined the Audi 80-based coupé with the rudimentary four-wheel-drive system taken from the Kübelwagen-derived Volkswagen Thing. Whilst the Thing could trace its off-road system back to the dark days of World War II, the boffins from Ingolstadt sprinkled some magic dust over it to create a World Rally Car like nothing seen before it. Despite being heavier than its arch rivals, the Lancia 037 and Lancia Delta, the traction afforded from the quattro four-wheel-drive system allowed its drivers to carry greater speeds through corners, as well as greater stability. The Sport quattro you see here is a homologation car developed for Group B rallying. It produced 302bhp (the original car had 197bhp) from its 2.1-litre engine and competition versions featured a body shell made from carbon-kevlar and a shorter wheelbase than the original quattro. Alongside the WRC manufacturers’ title in 1984, the Sport quattro also won the 1985 Pikes Peak Hillclimb in its famous S1 guise with Michèle Mouton behind the wheel.

PRICE:
P.O.R.
LINK TO CAR AND DEALER:
WoowMotors
USELESS CAR FACT:
Volkswagen’s marketing department wanted to call the quattro the ‘Carat’. During the time of the quattro’s development in the late 1970s, Carat was also a brand of cheap women’s perfume on-sale in West Germany. For a car as utilitarian as the quattro, Audi kicked up a bit of a fuss about this. In the end, the quattro name remained. “Fire up the Carat” doesn’t have quite the same ring to it, does it? 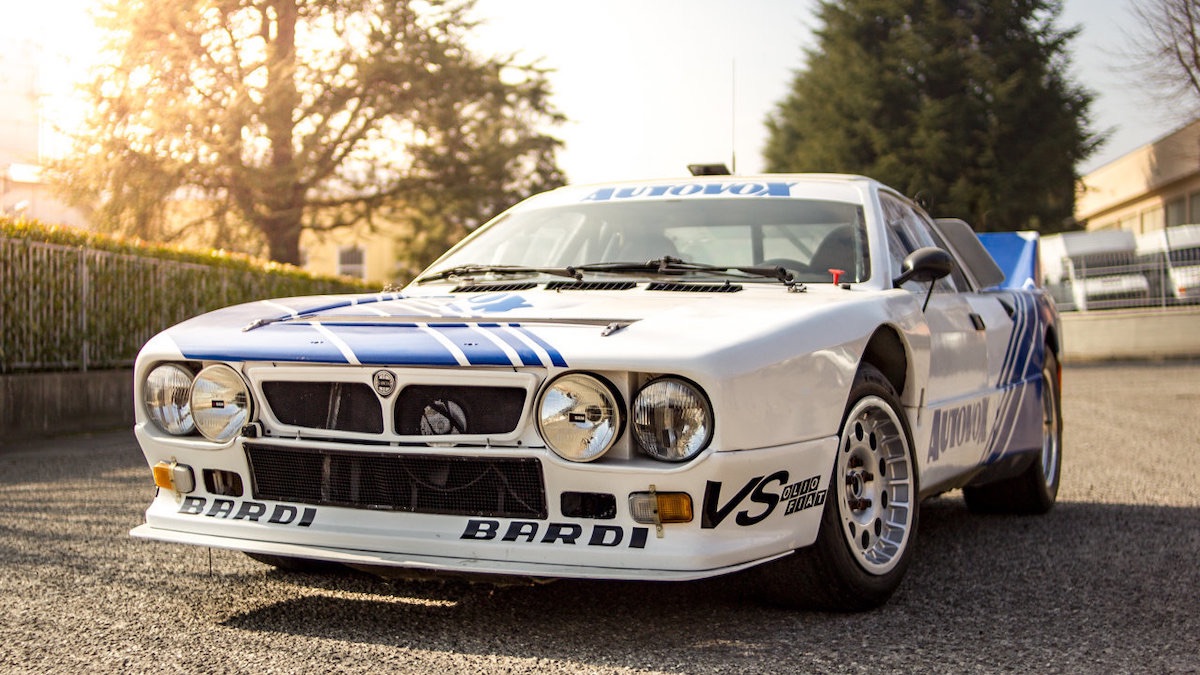 The Pininfarina-designed, supercharged Lancia 037 was fearsome, fast, and a WRC title winner in the hands of Walter Röhrl and Markku Ale
© Ruote da Sogno

The Lancia 037 was the successor to the Italian marque’s Stratos - one of the most successful rally cars of all time. The 037 was developed by Pininfarina, Abarth, and Dallara to compete in Group B rallying, and only 207 were made for homologation purposes. The 037 had a relatively short competition life and it lasted just three years from 1982 to 1985 as a works Lancia rally car. By the time it was replaced by the Lancia Delta S4, the rear-wheel-drive 037 had been thoroughly outclassed by the all-wheel-drive Audi quattros. However, the 037 scooped still managed to take six wins from 62 rallies in the hands of Walter Röhrl and Markku Alen, and Lancia even won the 1983 constructors’ title despite not turning up for the last two rounds. 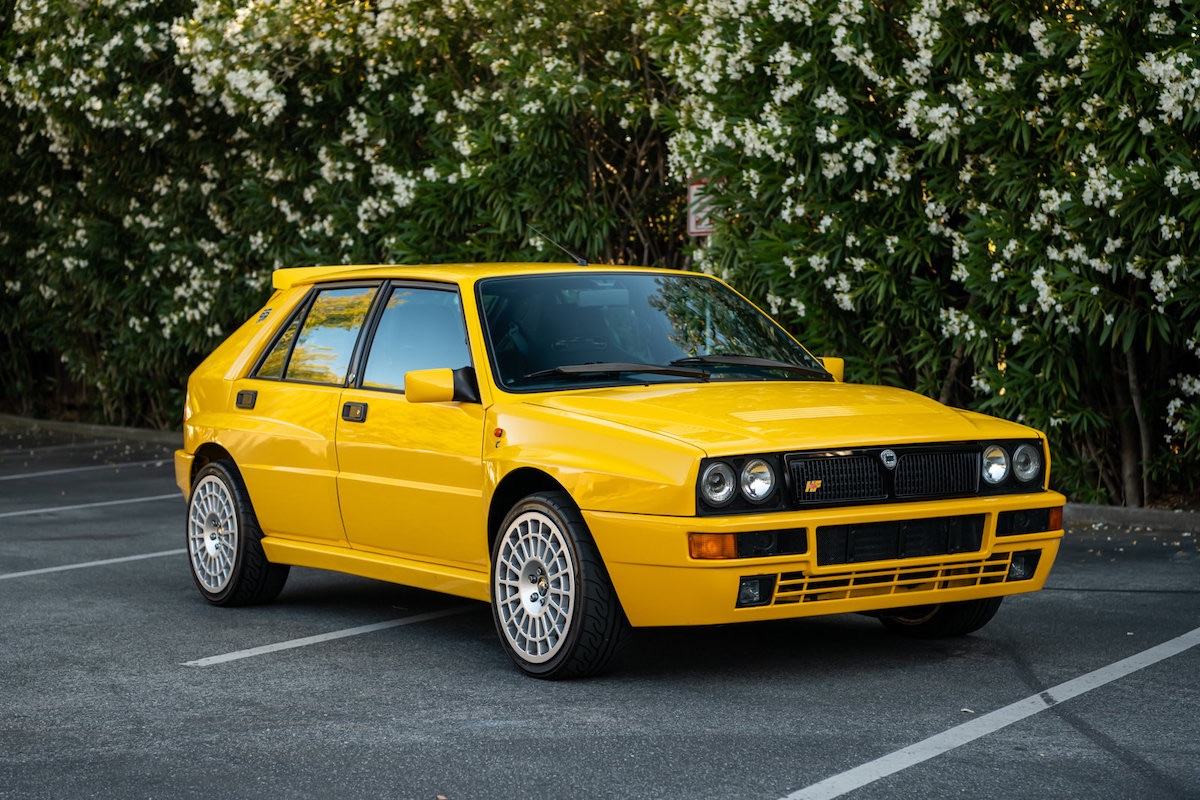 Along with the Subaru Impreza and the Mitsubishi Lancer Evolution, the Lancia Delta HF Integrale was one of the most recognisable roadgoing rally cars of the 1990s
© Euro Classix Cars

The Lancia Delta HF Integrale needs no huge introduction, so we won’t bother. One of the most iconic hot-hatches and road-going rally cars of all time, the Evo II was the final version of the ultra-successful Lancia Delta HF Integrale. The Evo II was wider, faster, and more aggressive looking thanks to a wider bodykit, updated 2.0-litre turbocharged engine, all-new Garrett turbocharger, as well as improved air induction and an upgraded fuel injection system.

PRICE:
P.O.R
LINK TO CAR AND DEALER:
Euro Classix Cars
USELESS CAR FACT:
This final version of the Delta HF Integrale Evo was never supported by Lancia as a manufacturer in the World Rally Championship. It was prepared by the privateer Jolly Club team. Despite now being run by privateers, the Evo still scored Lancia’s sixth and final WRC constructors’ title in 1992. 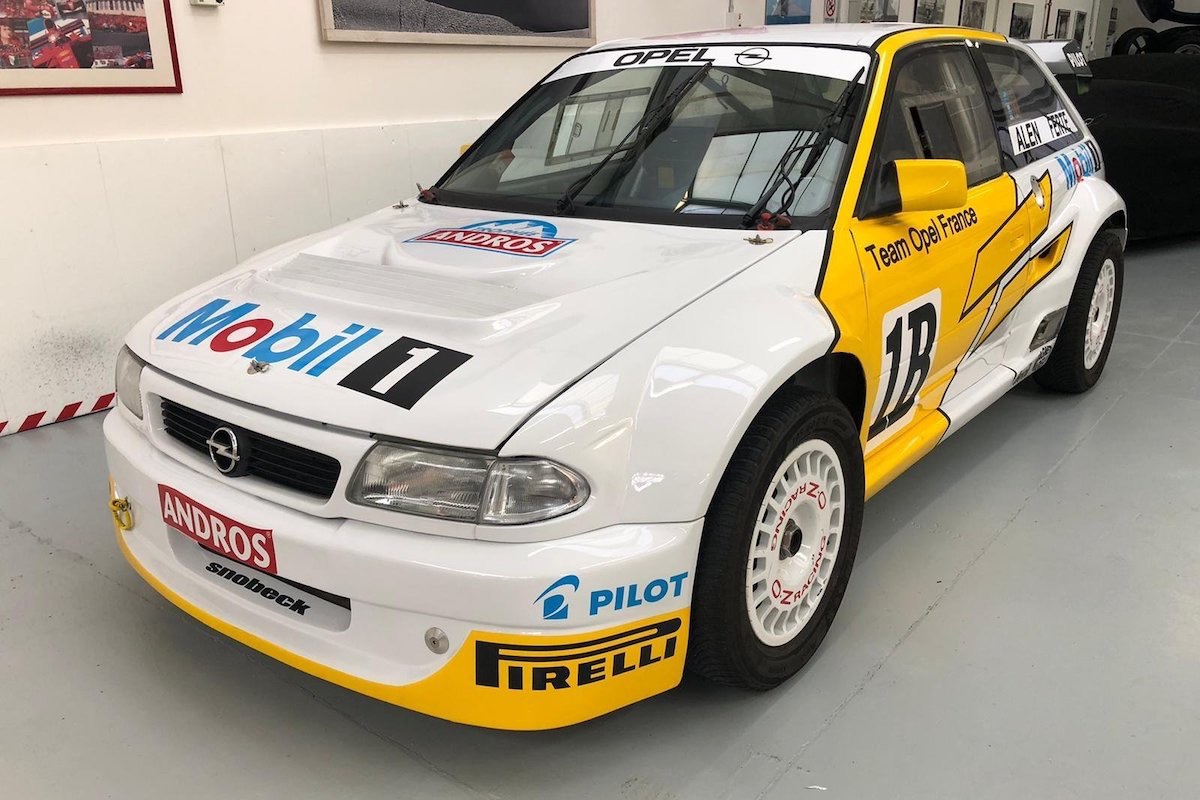 The Opel Astra (or Vauxhall Astra if you’re from the UK) offers very little to car enthusiasts. In fact, this mid-1990s version was memorable for erm… uhh… nope. Nothing. However, this V6-powered, Andros Trophy-spec version should make you stand up and take notice because it’s mega. The Andros Trophy is pretty much rallycross on ice, and it has attracted huge names from the motorsport world such as ex-F1 world champions Jacques Villeneuve and Alain Prost, touring car legend Yvan Müller, and some Finnish chap called Markku Alen to its roster of competitors. Yes, that’s right, that’s the same Finnish WRC legend who coined the term “maximum attack.” Speaking of Alen, this is the very car he drove whilst competing in the Andros Trophy. This Astra is powered by a 345bhp, mid-mounted 3.0-litre V6, and it’s underpinned by a four-wheel-drive system to cope with the icy surfaces of the close-knit, twisty Andros circuits. Still think ‘90s Astras are boring?

PRICE:
P.O.R
LINK TO CAR AND DEALER:
Erridibi Motori
USELESS CAR FACT:
Despite officially going out of production in 1998, this first generation of Astra continued to be produced by the General Motors factory in Poland (Gliwice) until 2002 under the name of the Astra Classic. 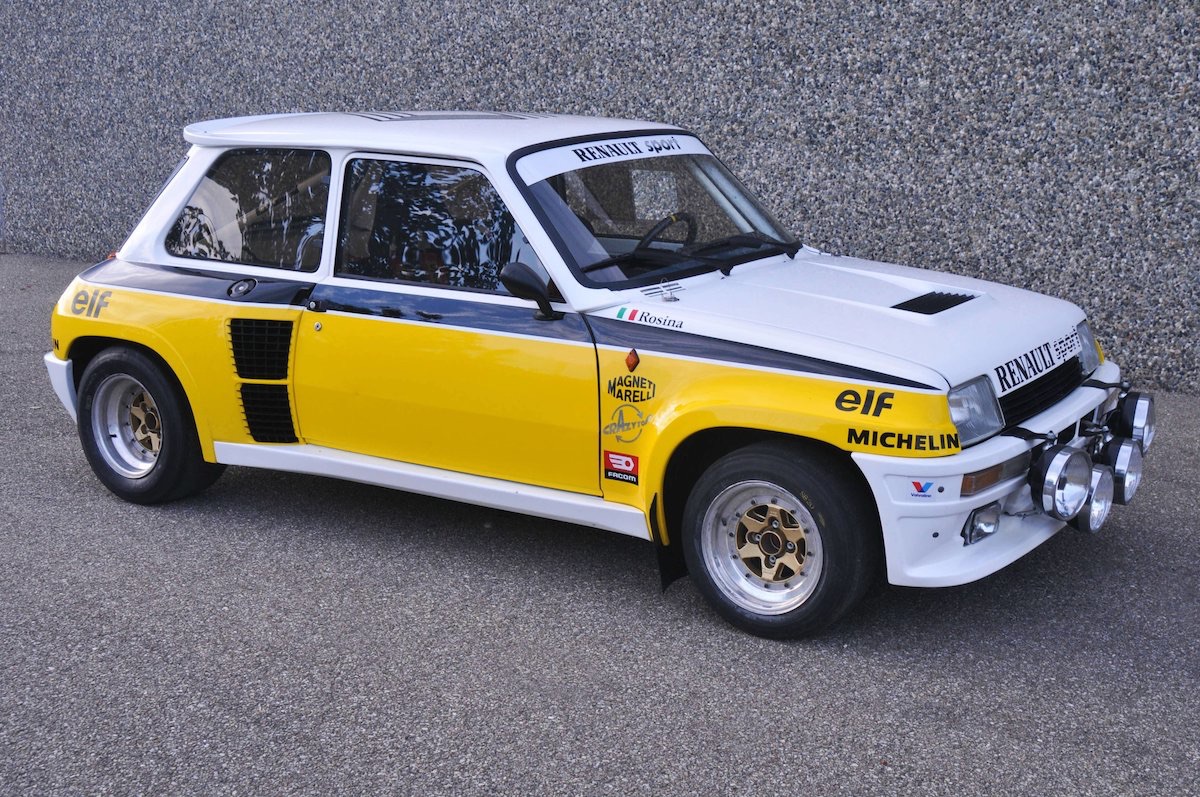 Believe it or not, the Renault 5 Turbo was once the fastest French production car around
© Heritage Motors

The Renault 5 Turbo (or R5) was what happened when Renault applied the turbo-charging expertise from its F1 team in the early-1980s to its tiny 1.4-litre engine that powered its humble Renault 5 hatchback. The outcome was 160bhp, a top speed of over 200km/h, and a 0-100km/h time of just under seven seconds. The powerful engine and the 5’s tiny, Bertone-designed dimensions were a recipe for success, and it proved a veritable rally weapon in the hands of Jean Ragnotti who took it to multiple victories in the WRC - most notably on its competitive debut in the 1981 Rally Monte Carlo and twice on the tough and twisty Tour de Corse. At the time of its launch in 1980, the R5 Turbo was the fastest French production car on the market.

PRICE:
EUR 130,000
LINK TO CAR AND DEALER:
Heritage Motors
USELESS CAR FACT:
The R5 was manufactured at the Alpine plant in Dieppe, France. By the time production of the little Renault ceased in 1986, many of its parts including the dashboard, suspension, and alloy wheel set were transferred to the Alpine A310.