One strong brand is good, but a twin-turbo is even better, which is why we see a lot of different brand partnerships in the market. It's not common, but sometimes a third joins in, and then the trio creates a harmonious environment. However, the key to a successful partnership is that the brands have to be in the same league and of equal emotional capacity, since too many car and watch tandems are simply inadequate. In my opinion, the minimal test is to just honestly answer one question: would the owner of that specific brand of car wear a watch with that label?

One of the most successful and well-known car and watch manufacturer partnerships began in 2003 – Breitling for Bentley. This interesting brand adventure started out modestly enough – Breitling designed and produced the on-board clock for the newly-released Continental GT. Later, an entire collection of mechanical chronographs was launched – over-sized, luxury watches ideally suited to owners (and wannabe owners) of the Crewe car-maker's sporty behemoths.

There was, however, one subtle nuance that only watch lovers know about. For automotive enthusiasts, one of the most important things is what's under the bonnet. True watch aficionados adhere to similar values. So Breitling has long used ETA movements for its watches. And incidentally, they are all COSC certified. Nonetheless, this is the same as putting another manufacturer's engine in your car. In other words, it's as if there's nothing wrong with it, but it's still not a factory team. However, Breitling worked hard to create its own movement, and in 2009 it launched the 01caliber, which is wholly assembled in-house. These mechanisms have been used for Breitling for Bentley watches since 2013, so everything is now in place. 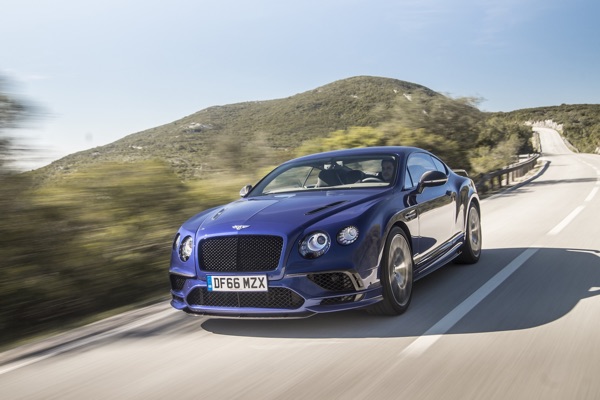 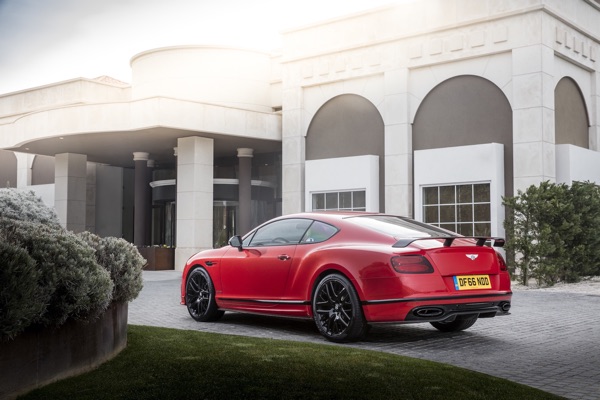 However, the latest product of this partnership is a spectacular chronograph in tribute to the new Continentall Supersport. With a top speed of 211 mph (340 km/h) and a 0–60 mph (0 to 100 km/h) acceleration time of 3.5 seconds, this is the fastest Continental ever built. To celebrate the launch of the Bentley Continental Supersports, Breitling for Bentley has created a limited-edition chronograph with a titanium case, carbon dial and a connected movement equipped with functions dedicated to motorsports. A performance-packed model in the vanguard of technology. Limited edition – only 500 watches – Bentley Supersports B55 grab attention instantly by its super powerful and sporty design. Dial in carbon fibre – a favourite material in the motorsports arena and featured in many details of the new Continental Supersports. This intrepid touch is further enhanced by a double-layer red-edged and lined black rubber strap.

Such exceptional bodywork deserved an equally exceptional engine. For the first time in Breitling for Bentley history Breitling has equipped a chronograph dedicated to the British carmaker with an electronic movement – and a very special one at that. A high-octane tribute to the sportiest of the Continental GT, and a showcase for Breitling’s trademark innovation, this Bentley Supersports B55 with its officially chronometer-certified SuperQuartz™ movement once again pushes the limits of functionality, precision, and performance. The epitome of vanguard connected chronograph technology. 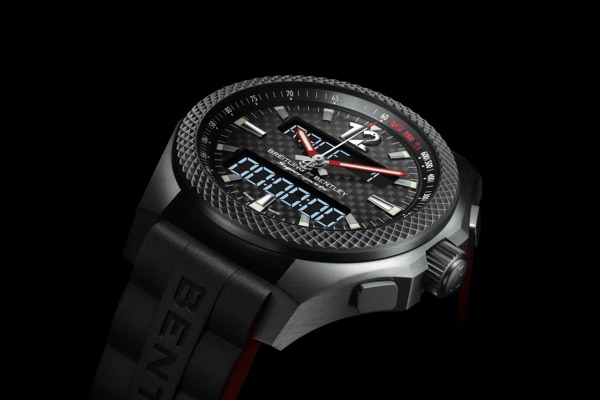 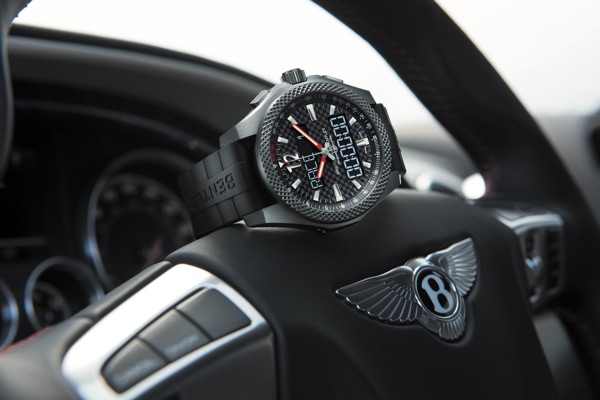 This new version of its in-house B55 connected calibre is enriched with functions tailor-made for the automobile universe. Alongside the flyback chronograph, lap timer and electronic tachymeter, this B55 “Racing” calibre features three types of exclusive chronograph functions. Firstly, the “chrono rally” function serves to record up to 30 stages, complete with the departure date of the rally, the start time and duration of each stage, as well as intermediate times for each stage, while adding in any penalties incurred. Secondly, the “chrono race” function designed for track races enables the user to record the split times for each lap and calculate the average speed per lap. Thirdly, the “regularity rally” function (useful in competitions in which the objective is to cover a given distance in a given time) affords the possibility of predefining target times or intermediate times out of a total time, and then checking at the press of a button whether one is meeting those goals.

The entirely autonomous Bentley Supersports B55 has been designed as a full-fledged chronograph, with the smartphone connection used to enhance its functionality and to store or transmit data. The smartphone app has been developed in Switzerland specifically for this watch. The two ultra-legible LCD (liquid crystal display) screens are equipped with a backlighting system that can be activated by pressing the crown or by tilting the wrist – a welcome asset in the heat of the action.

Yet however cool the Bentley Supersports B55 may be, it has quartz movement. If we treat it as a specific instrument, then everything is fine, but if we treat it as a standard traditional watch with specific functions, then it may not be acceptable to many real horology fans – something like a diesel engine is to sports car enthusiasts. So for lovers of classic horology, there is the Bentley B06 Midnight Carbon, with its Manufacture Breitling Calibre B06 and exclusive “30-second chronograph” system. Its originality is now further accentuated in an all black-clad 500-piece limited series. 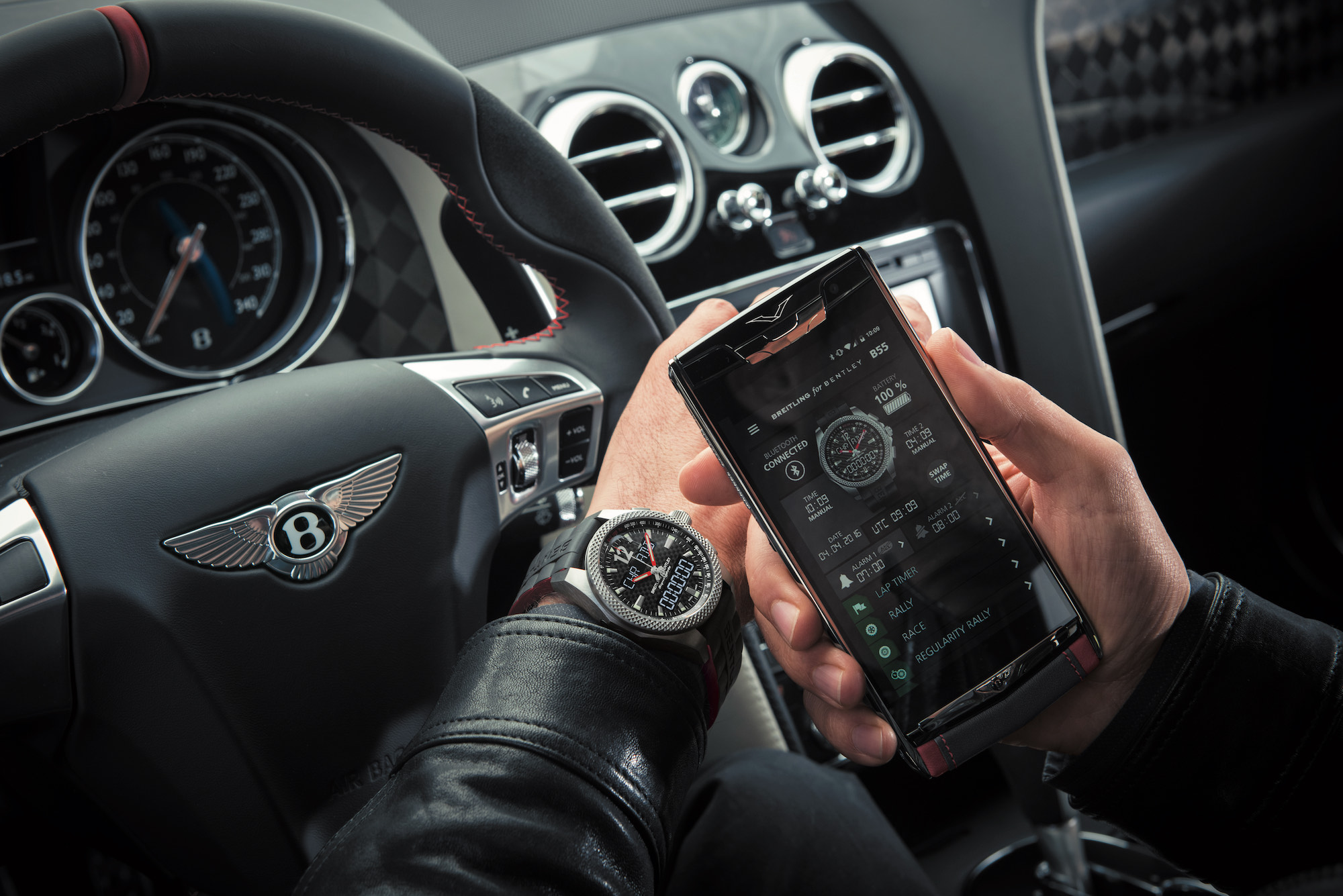 Bentley Supersports B55 has been designed as a full-fledged chronograph, with the smartphone connection used to enhance its functionality and to store or transmit data
© Breitling

Both the satin-brushed steel case and the bezel featuring a knurled motif inspired by the Bentley radiator grilles are coated with a black high-resistance carbon-based treatment. The dial stages a striking contrast between a shimmering black mother-of-pearl background, matt counters and red and white indications. This original and powerful approach continues on the reverse side of the watch with a spectacular 360°-sculpted oscillating weight evoking the shape of a wheel rim and visible through a transparent caseback.

Beneath this stylish exterior beats Manufacture Breitling Calibre B06, a high-performance selfwinding chronograph movement chronometer-certified by the COSC (Swiss Official Chronometer Testing Institute). The ingenious “30-second chronograph” system, inspired by a Breitling patent dating from 1926, is distinguished by its central hand performing a full sweep of the dial in half a minute – and thus ensuring extremely accurate 1/8th of a second time readings. 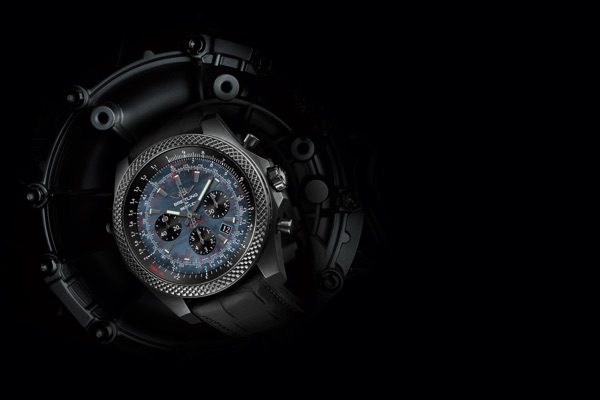 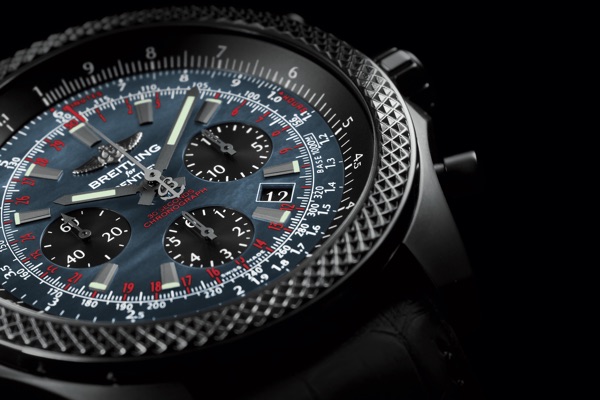 Beneath this stylish exterior beats Manufacture Breitling Calibre B06, a high-performance selfwinding chronograph movement chronometer-certified by the COSC
© Breitling

The dial also displays another world-exclusive feature of Breitling for Bentley instruments: a “variable tachymeter”, based on a circular slide rule. Used in conjunction with the chronograph, this system serves to measure an average speed whatever the time elapsed, the distance covered or the speed reached. This device ensures considerably superior operation to that of conventional tachymeters which are confined to observations based on times under 60 seconds. 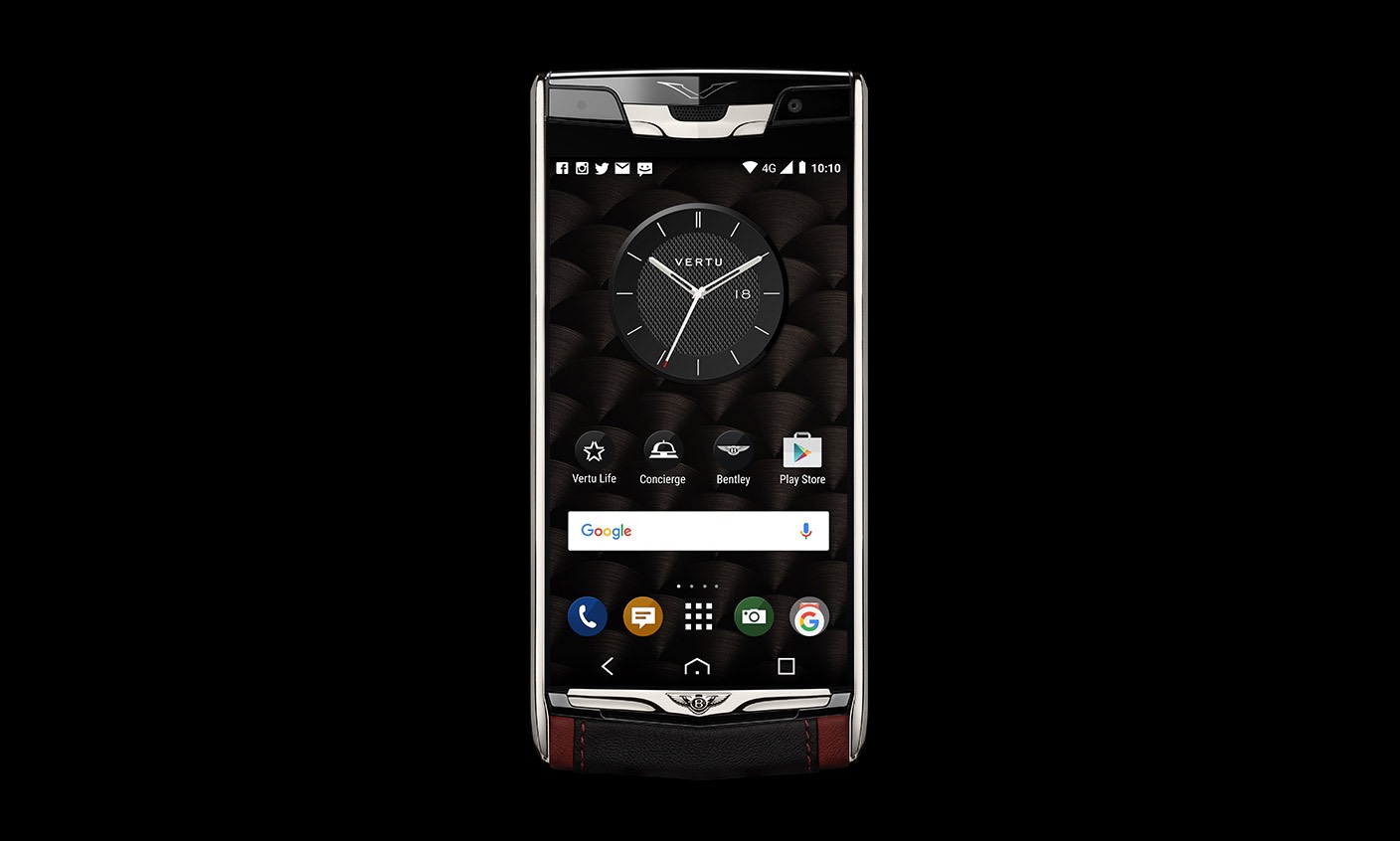 Designed to capture Vertu and Bentley’s shared design and performance ethos, Signature Touch for Bentley is a masterpiece of engineering. It features a 21-megapixel camera with ultra-high definition 4k video capture, and significant speed and security improvements with the Android Lollipop 5.1 64-bit operating system. The 5’2” sapphire screen is Vertu’s largest to date and delivers exceptional colour and brightness. The Bentley app delivers exclusive content for owners and enthusiasts alike, ensuring you are closer than ever to unique brand experiences and content. Enjoy complete peace of mind with our new Lost Phone service, as well as 24-hour dedicated Concierge, Vertu Life and Vertu Certainty, with heightened voice and data security.