What do watchmakers and car manufacturers share in common? They both create objects which manifest love in a mechanical object. Let's take a look at the watches offered to fans by the exclusive car brands.

The long-term friendship between car manufacturers and watchmakers dates back to the period when they began installing clocks on car dashboards. In 1903, Alfred Dunhill's company created the first patented car chronograph. 8 years later, this idea became a reality when in 1911 it was put in practice by Heuer company. They installed 11 cm diameter clocks named Time of Trip on car (or airplane) dashboards. This was an amazing invention, so it didn't take long for this chronograph to become the most popular worldwide.

Naturally, this cooperation soon took the direction of wristwatches which, similarly to cars, explicitly speak of the owner's financial status and taste. Car manufacturers sell watches for a number of reasons, yet in most cases it is for the sake of the brand's publicity. Some may cost a few hundred dollars, whereas others are coated with gold or platinum. Some watches are impossible to purchase, such as the Bugatti watches which are available only to VIP car buyers.

Let's look at some interesting partnerships between car manufacturers and watchmakers.

The history of the Mille Miglia car race dates back to 1927. The legendary Enzo Ferrari described it as "the most beautiful car race". Chopard has been one of the sponsors of this race since 1988. The company offers car fans the opportunity to purchase the Mille Miglia chronograph. The company's owner, Karl-Friedrich Schuefele, personally attends this event every year. 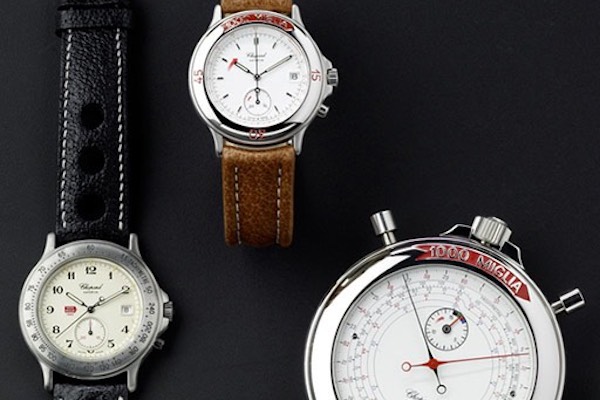 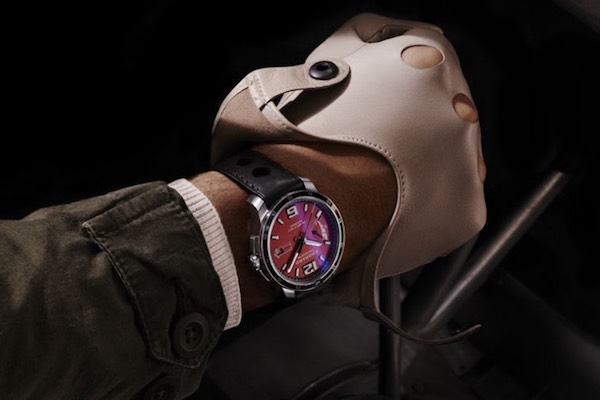 Also each year, the Geneva-based Chopard watchmakers design a new Mille Miglia model that reflects the sport style of this iconic race. For over 25 years, fans of cars and racing have looked forward to a new version of this famous watch, with a rubber band that imitates Dunlop tire patterns as its trademark, which was introduced in 1990.

Now the price of the watches in Chopard's featured Mille Miglia collection ranges from several thousand to as much as 15 000 dollars.

Ferrari was one of the first car manufacturers to begin an active cooperation with watchmakers, in order to allow their fans to wear Ferrari brand wristwatches. Their long-term friendship with Longines began in 1979. Initially, the partnership was limited to the Formula 1 team. In the beginning of the 1990s, Ferrari began cooperating with Girard-Perregeaux and introduced 499 gilded frame watches in the limited edition Tribute to Ferrari series. For over a decade, the company produced extremely luxurious watches, which are worth from several to many thousands of dollars. 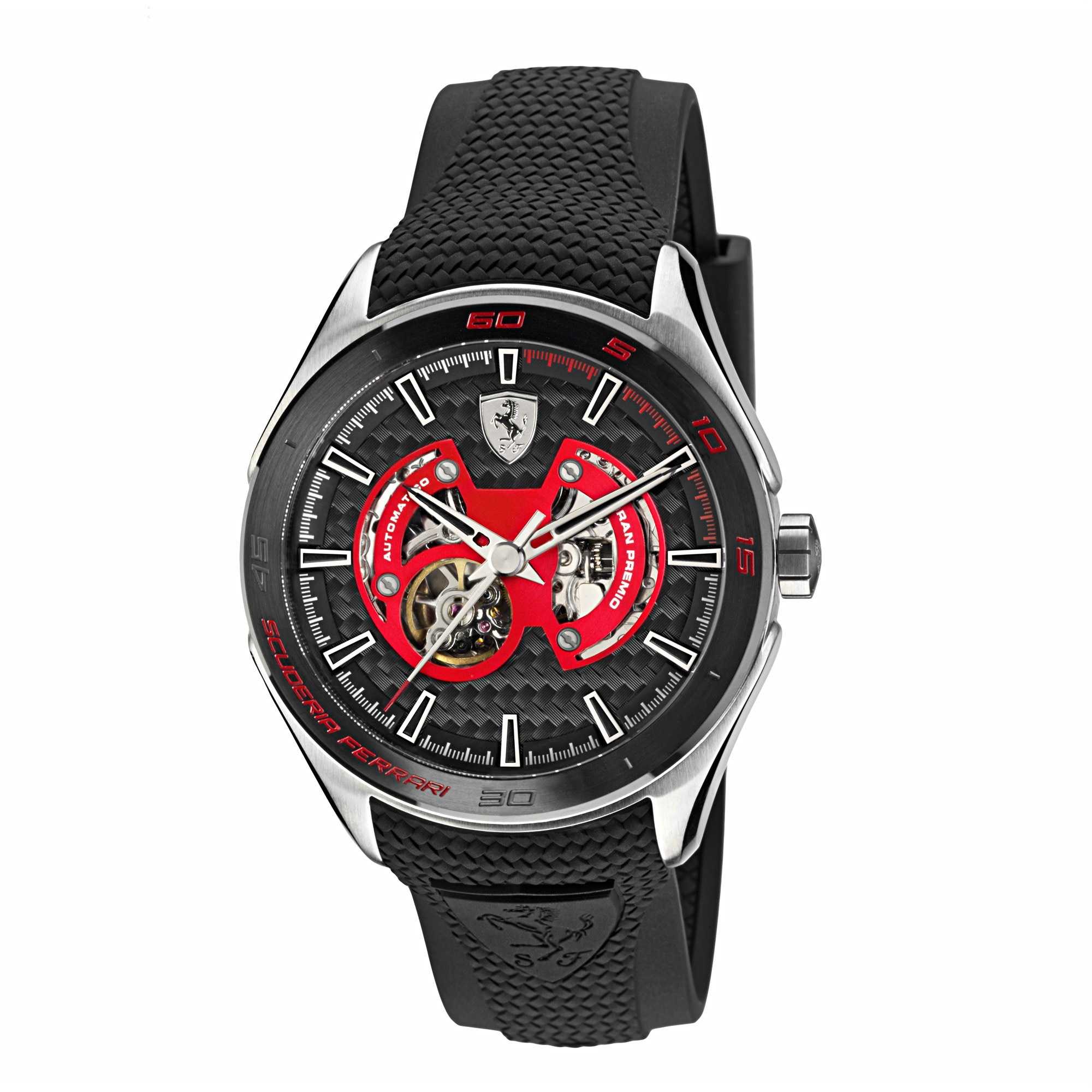 In 2005, however, the partnership was terminated and in 2006 Ferrari’s new partners, Officine Panerai, were introduced. This new partner created a new watch, the Ferrari Panerai, and also introduced a different kind of philosophy. Traditionally, watchmakers would follow the principle of producing a single watch especially for the Ferrari brand, whereas now a different approach was adopted - it is a Ferrari watch brand created by Panerai. Two collections followed afterwards: Granturismo and Scuderia. The Ferrari Engineered by Panerai watches cost from 5 000 to 30 000 USD. However, the sales didn't meet expectations, which resulted in a termination of the cooperation between the two companies in 2010.

The Swiss company Breitling has always been famous for its production of pilot watches. Therefore, it is no surprise that similarities can be found in its cooperation with car manufacturers. Lately, this company has been engaged by the Bentley brand. The car company's founder, Owen Bentley, once manufactured airplane engines and was a pilot of the French Air Force during WWI. 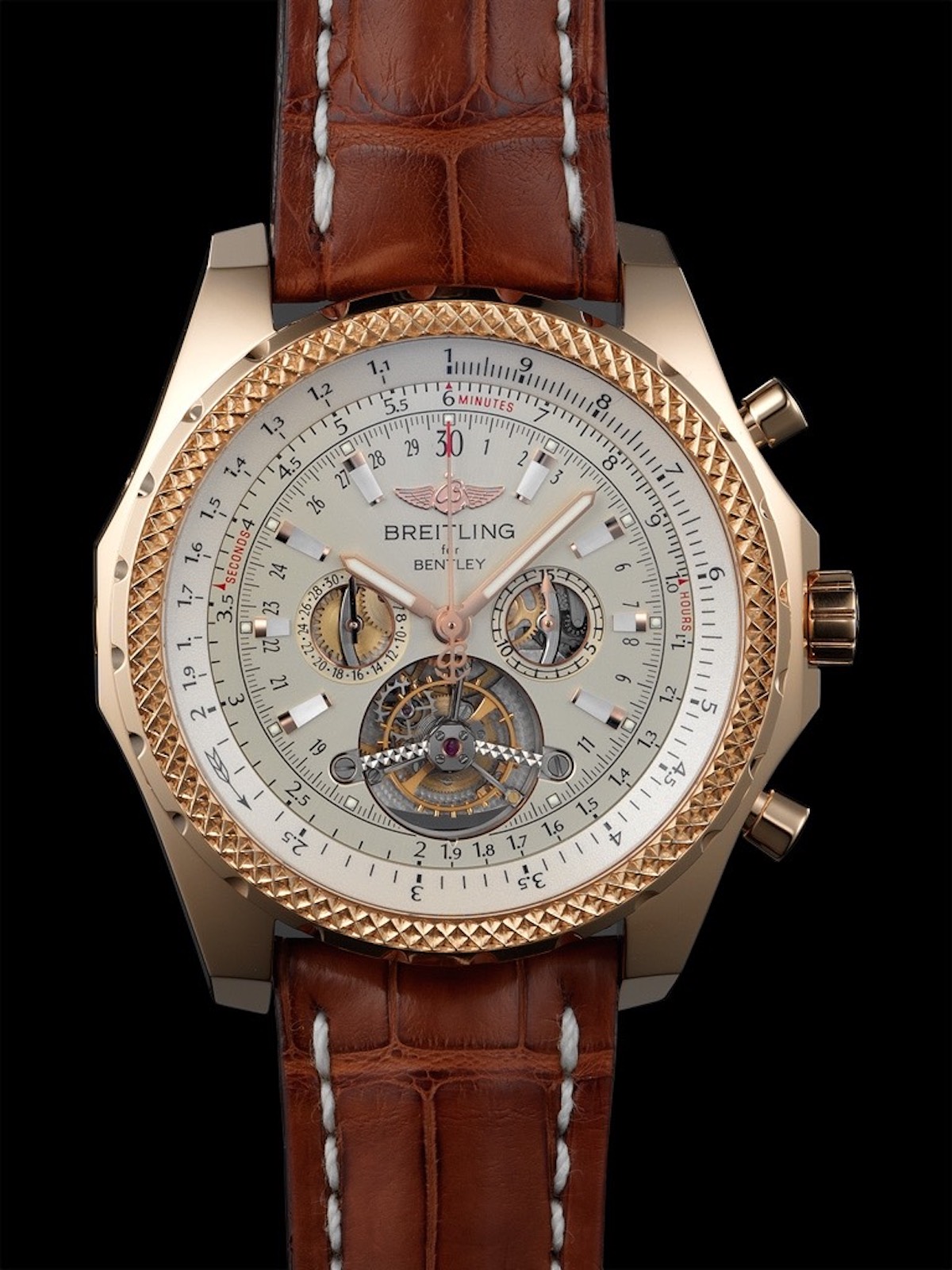 The first joint item of Breitling and Bentley was introduced in 2002; however, it wasn't a watch but was a super-fast Continental GT model. The entire automobile was created by the Bentley professionals, except for the dashboard which was entrusted to Breitling. As might have been expected, each buyer of this model received a special dedicated Swiss watch.

The Breitling for Bentley collection is currently available. It is hard to find two identical Bentley cars - and this philosophy is also shared by the watchmakers. Every Bentley client can make personal changes to any part of the watch; however the dial must be colored only in the original Bentley body colors.

The famous Italian design house Pininfarina introduced an original idea in the association between a car manufacturer and a top-quality watchmaker. In 2008, in the Concours d'Elegance competition, a special order was introduced by an American collector, Pebble Beach. It was a re-make of the Rolls-Royce Drophead-Coupe, originally created by Pininfarina, but given the new name of Hyperion. An interesting solution was presented - the Girard-Perregaux Vintage 1945 Tourbillon was installed in the dashboard, yet it was also possible to take it out and wear as a wristwatch. 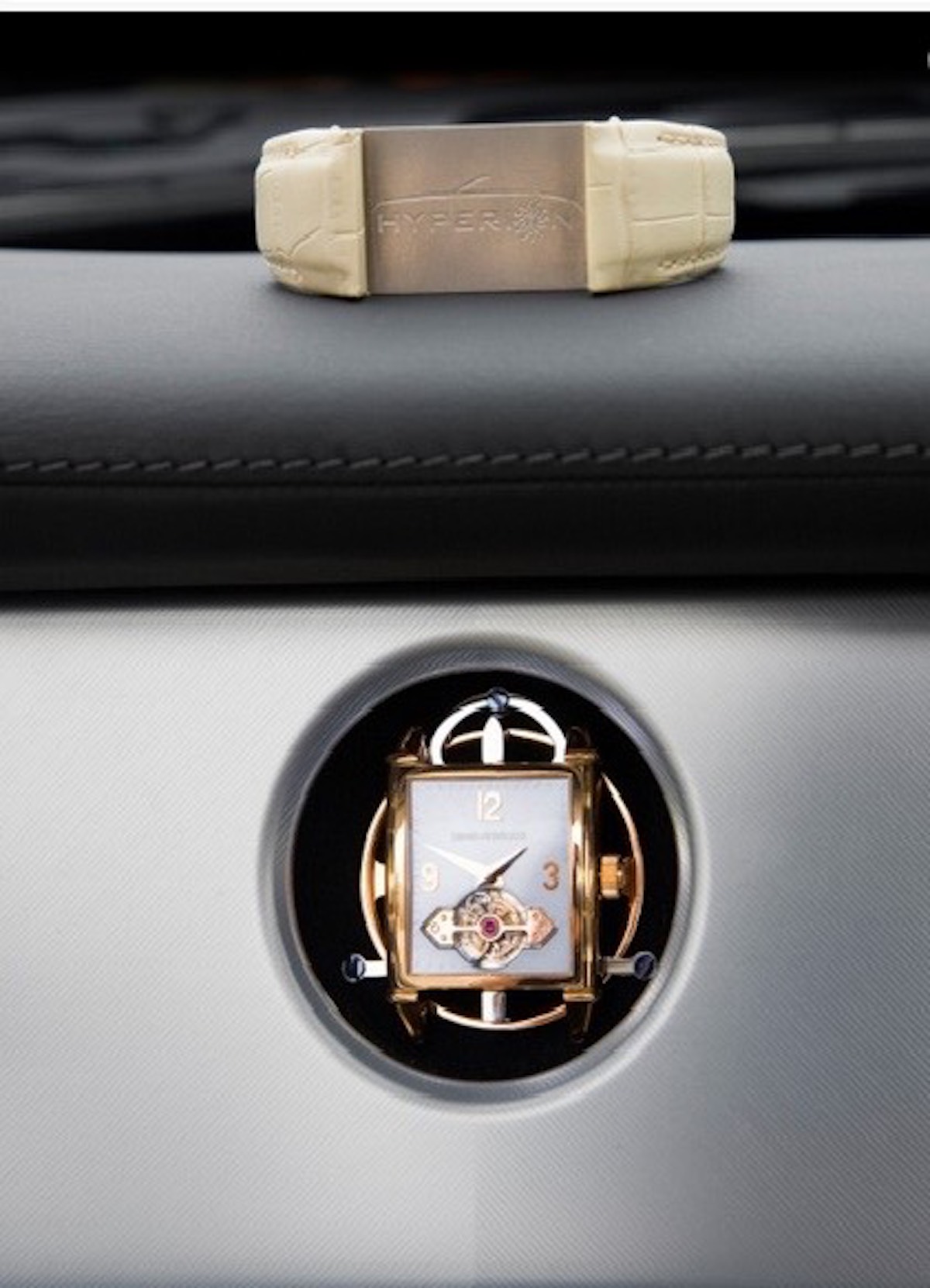 Perhaps the most famous period of the partnership between Rolls-Royce and a watchmaker was in 1976-1996, when the Swiss company Corum produced an extremely limited edition series of luxury watches. These stood out not only in terms of their expensive parts, - their design was exceptional as well. The watch body resembled the shape of a Rolls-Royce engine grid.

This Italian car manufacturer is famous for eccentricity, so its trademarked watches must have the same feature. This has proven to be true in Maserati’s cooperation with Audemars Piguet. At the time of Maserati's 90-year anniversary, the first jointly created watch was introduced - a rather strange and confusing Dual Time Millenary Maserati. 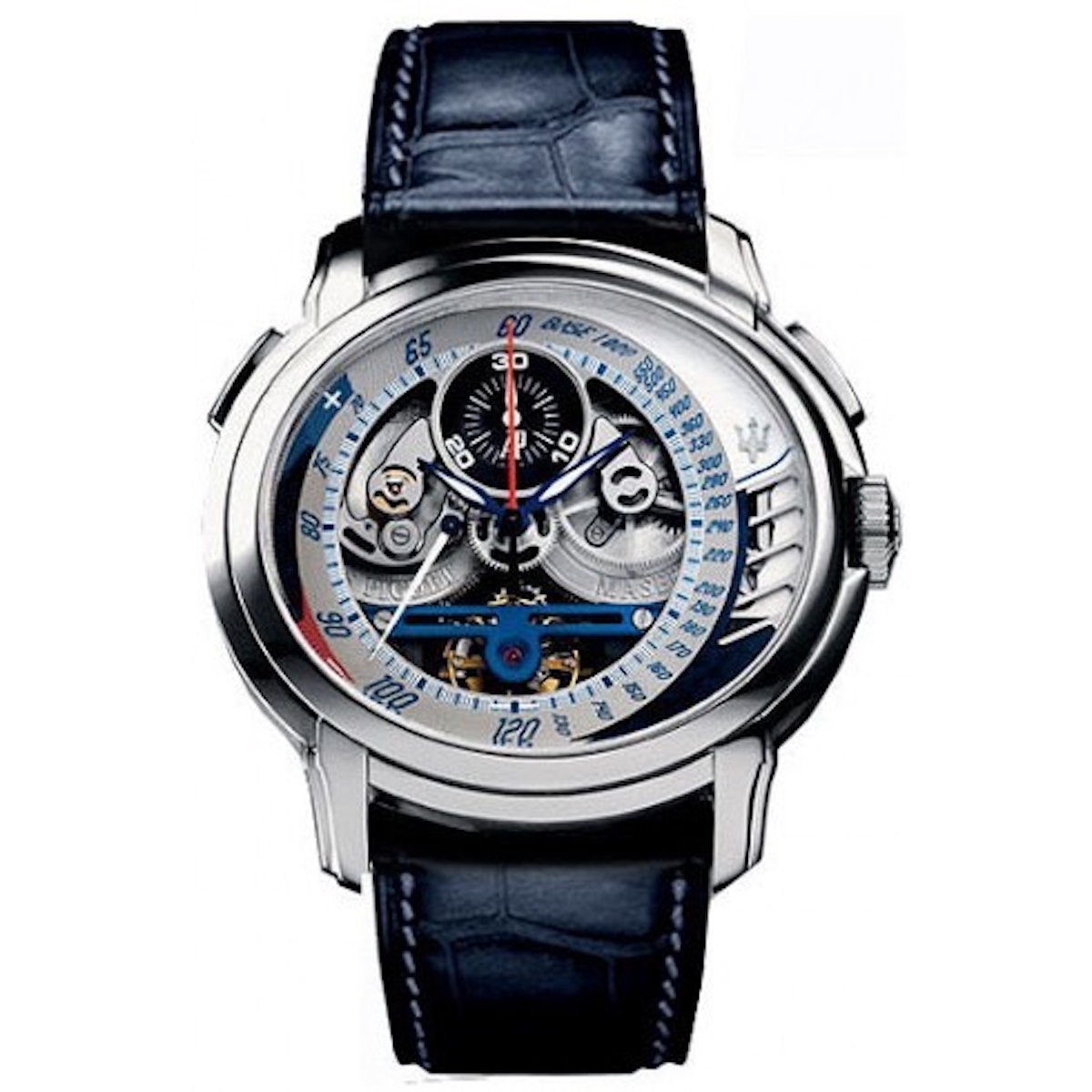 Then in 2006 the most exotic debut was made - the platinum Millenary MC12 Tourbillon Chronograph in the same color as the MC12 model. Only 150 fortunate buyers could acquire the watch. Amazingly, this watch was sold for 300 000 dollars.