An Introduction to the POTUS Limousine


The Beast, Cadillac One, Limousine One, the First Car and Stagecoach are only a handful of the nicknames used for the state cars of the President of the United States. Throughout its history, the presidential vehicle has long been the centre of attention and during the course of its life, it has undergone a series of intriguing modifications that have captured the attention of car enthusiasts across the globe.

The first official presidential car was introduced in 1939. Beforehand, the FBI had not focused on providing the Head of State with a specially-designed, armour-cladded vehicle for official use, meaning regular production cars were used to transport the US president.

Prior to the introduction of an official presidential vehicle under President Franklin D. Roosevelt, there was already established history of POTUS using a car to travel around, with President William McKinley being the first to do so in 1901 Stanley Steamer. However, it was William Taft who could be properly considered to be the first ‘motoring president’. 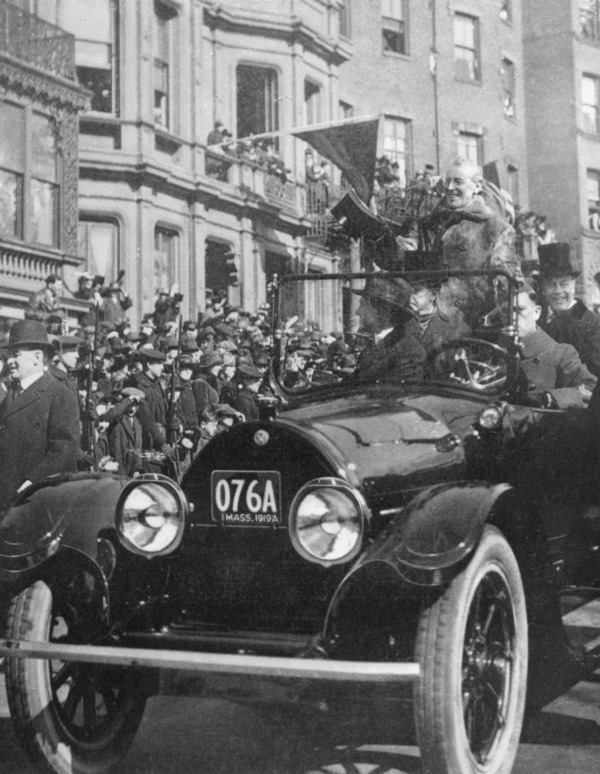 William Taft: The Pioneer of the US Presidential Vehicle


During his term from 1909 to 1913, Taft commissioned four vehicles - at the price of $12,000 USD - for the presidential garage. These were two Pierce-Arrow, a White Motor Company steam car, and a Baker Motor Vehicle electric car, which boasted a top speed of 14 miles-per-hour and most importantly, did not require a crank handle to start. 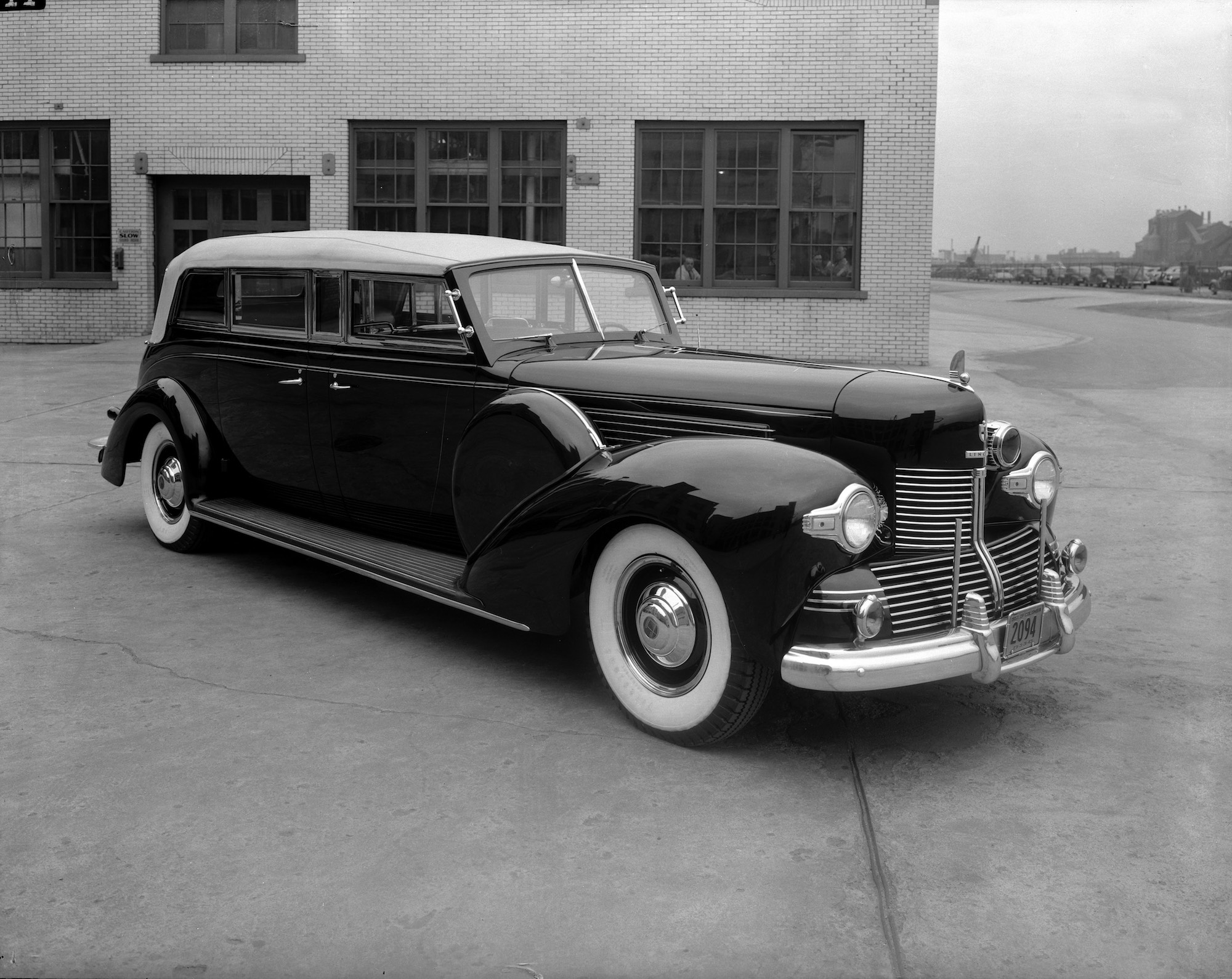 It is worth noting that until FDR came to power in 1933, that the President of the United States rode in an unarmoured vehicle. This changed when the government confiscated a 1928 Cadillac V-16 was confiscated from an infamous mobster, Al Capone, and used as the presidential limousine. 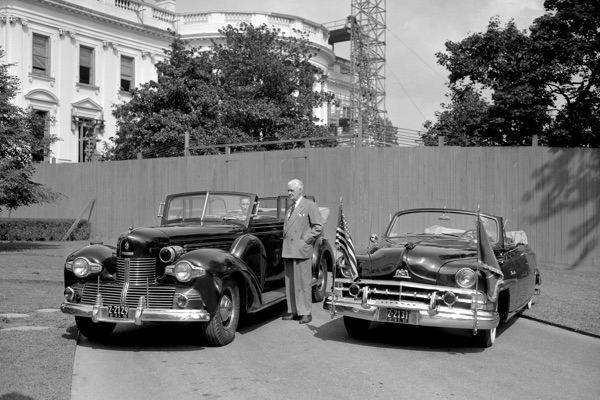 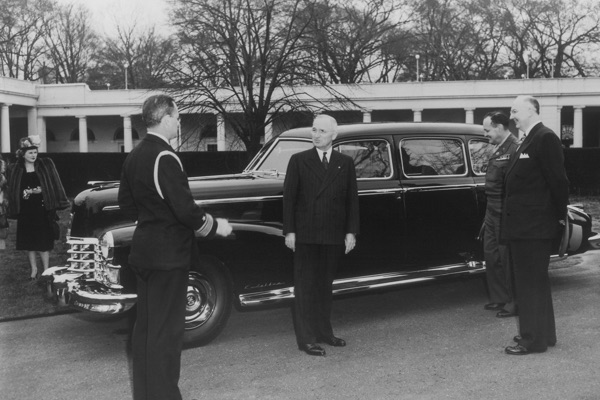 The Cadillac’s colourful history didn’t win it too many friends in Washington circles, but it did set a precedent for using armour plating for POTUS’ vehicle.

FDR: A New Deal for the United States and an All-New Presidential Car Concept

In 1939 - a year that is often considered to be the start of the presidential car - it was replaced by the Lincoln convertible, which was known as the ‘Sunshine Special’ as it was often seen with its top retracted.

The Sunshine Special was the first car to be built to a specification outlined by the FBI. It featured suicide doors, heavy-duty suspension, two side-mounted spare tyres, and side-running standing platforms for armed presidential bodyguards.

Following the Japanese attack on Pearl Harbour, the secret service commissioned the addition of more armour, one-inch-thick bulletproof glass, metal-clad flat-proof tyres, a radio transmitter, a siren, red warning lights, and a hidden compartment for submachine guns - these modifications saw the car’s weight jump to 4,200 kilograms, and the ‘Sunshine Special’ can be seen on display at the Henry Ford Museum in Dearborn, Michigan.

In 1950, the Sunshine Special was replaced by the Lincoln Cosmopolitan, which was built for President Harry S. Truman. It is rumoured that Ford-owned Lincoln received the commission for the latest presidential vehicle, as Truman harboured a grudge against General Motors, who would not provide him with a car during his 1948 presidential campaign.

The Lincoln Cosmopolitan was the first car to use a bulletproof “bubbletop” canopy and when it was decommissioned in 1967, it too was returned to the Henry Ford Museum. 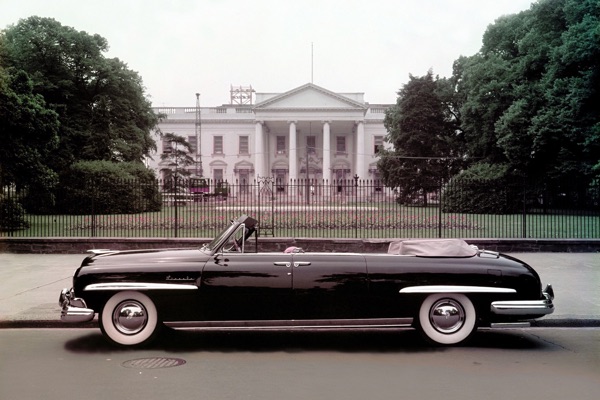 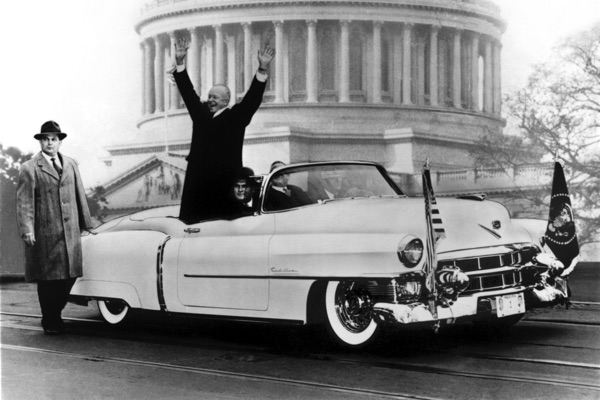 
Another Lincoln worth a story of its own was the 1961 Lincoln Continental SS-100-X, which was used by President John F. Kennedy and his successor, Lyndon B. Johnson. It was also the car in which Kennedy was assassinated in Dallas on November 22nd, 1963. 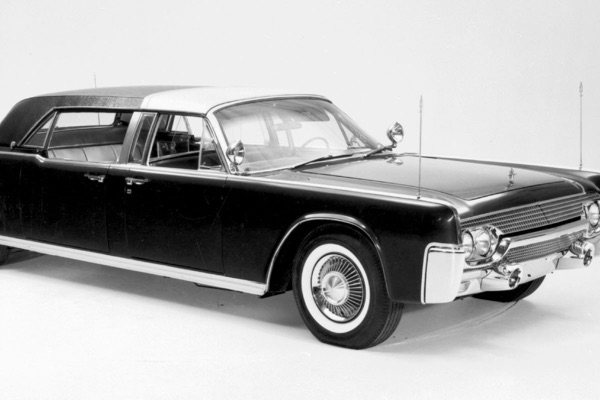 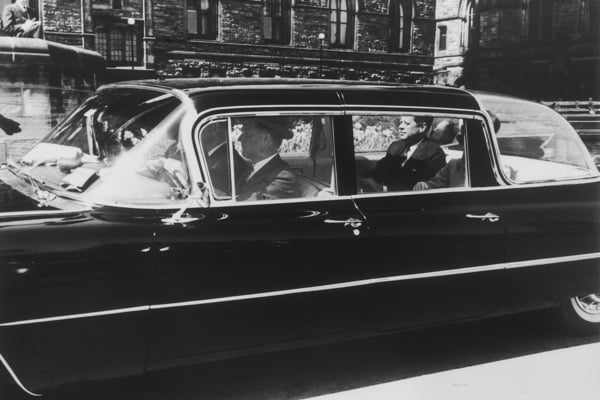 President John F. Kennedy and Mrs. Kennedy visit Canada in a custom modified limousine made for a visit from Queen Elizabeth II to Canada
© General Motors

The Kennedy car was the most high-tech and best-equipped presidential yet with a heavy-duty heater, air conditioning system, a pair of radiotelephones, a fire extinguisher, a first aid kit, and a siren. In terms of tech, the SS-100-X was fitted with retractable standing platforms, three sets of removable roofs - a standard soft top, a lightweight metal one, and a transparent plastic one - as well as a hydraulic lift that raised the car’s rear seat. 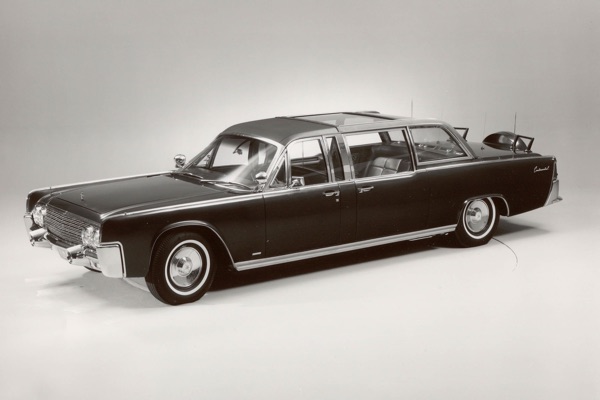 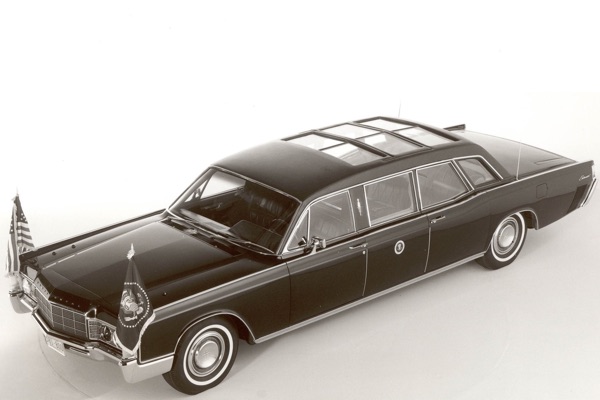 What was the purpose of all of the above? To make the president visible at all times.

Following JFK’s assassination, SS-100-X was not taken out of service. It was redesigned with a fixed bulletproof roof and repainted black instead of the Kennedy car’s navy blue. It was used by President LBJ until 1967. The car’s history has made the Lincoln Continental one of the most recognisable cars in history, and unsurprisingly, it was the last convertible to be used by the White House. 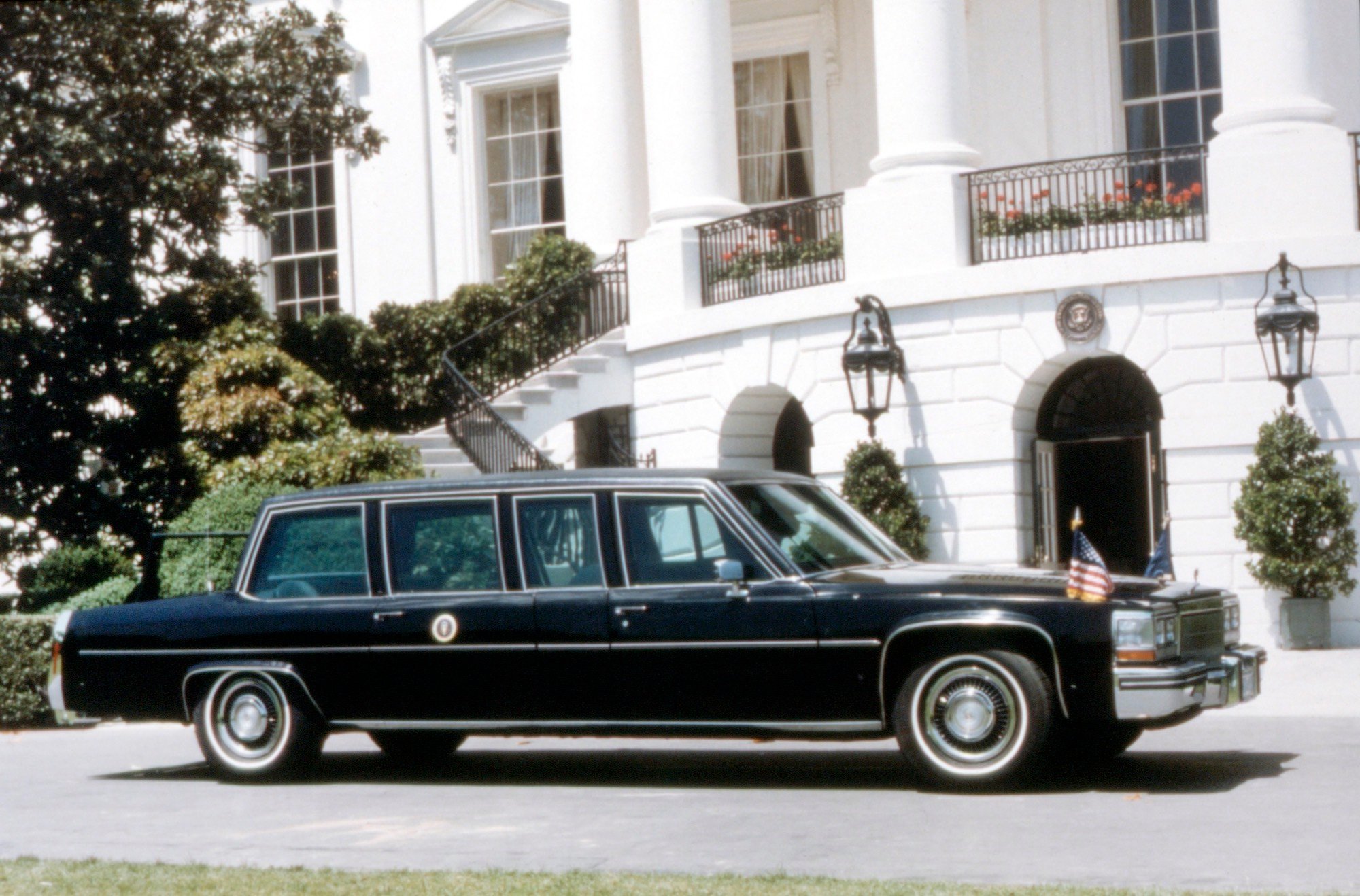 Reagan to Trump: From Lincoln to Cadillac, to Lincoln and Back to Cadillac with “the Beast”


Each US president from Richard Nixon to Ronald Reagan used Lincolns until 1983, when the latter switched the presidential car to a Cadillac Fleetwood Brougham. It featured armour plating, bulletproof glass, and was described as being “distinctively styled, with a raised roof and a large rear greenhouse.”

From 1989 to 1993, Reagan’s successor, George H. W. Bush returned to the Lincoln brand and rode in a Lincoln Town Car. In 1993 when Bill Clinton replaced Bush as POTUS, the White House returned to Cadillac as the presidential car and has remained so ever since. 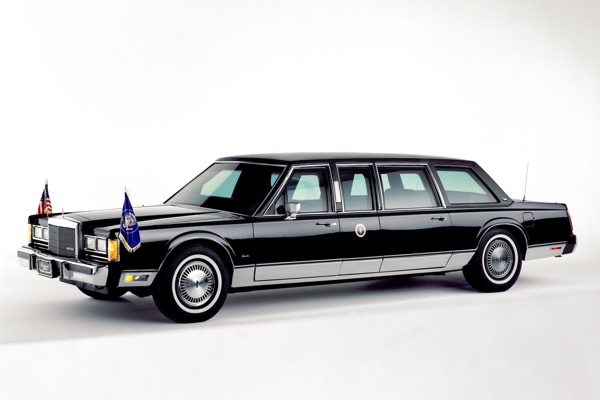 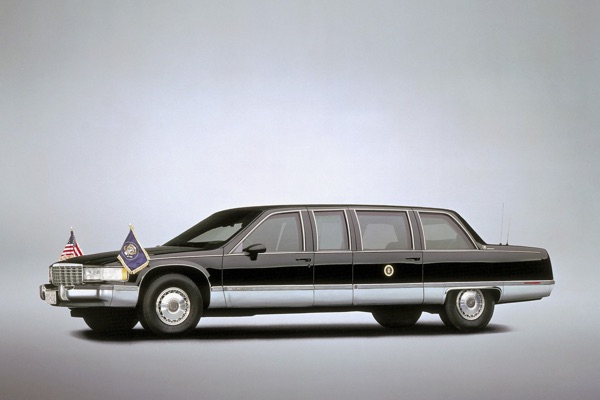 When Barack Obama became president in 2009 the presidential vehicle became an armoured Cadillac called “Cadillac One” after Air Force One, or “the Beast.” Despite taking styling cues from existing Cadillac, it is an entirely unique vehicle, which has been developed on a medium-sized truck platform. The car is also used by the presidential incumbent, Donald Trump

The Beast's doors have eight-inch thick armour plating, with bulletproof class a further five-inches thick. It has run-flat tyres, an armour-plated fuel tank, and an interior which is completely hermetically seaweed to protect its occupants in the event of a chemical and armed attached. In terms of defence mechanisms, the Beast boasts rocket-propelled grenades, night vision optics, a tear gas cannon, on-board oxygen tanks, an armoured fuel tank filled with foam to prevent an explosion, pump-action shotguns, and two US pints of blood in the president's blood type 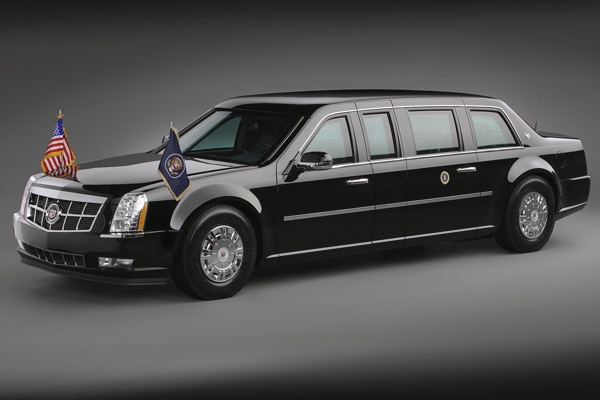 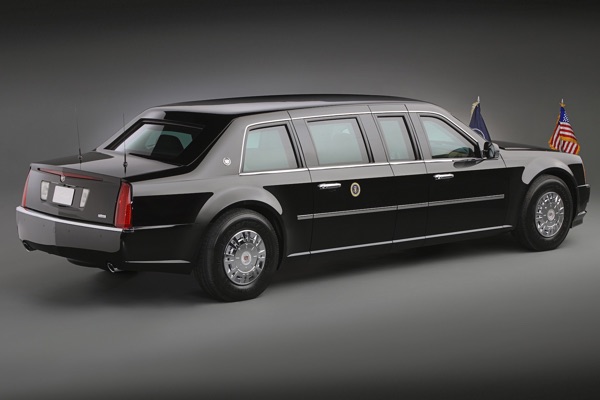 The engine that powers the current presidential vehicle is also unknown, but it is suspected there are two options - a petrol-powered Vortec 8.1-litre V8, or a 6.6-litre turbo diesel V8 engine. The car's weight ranges from 6,800 to 9,100 kilograms and as a result, it can only reach a top speed of around about 60 mph. According to unofficial information, the White House has twelve of these cars

Trump or Biden: What’s Next?


In November 2020, it remains to be seen whether Donald Trump will be re-elected, or Joe Biden will become the 46th President of the United States. Whatever happens, either candidate will likely be given an all-new presidential vehicle. It’s almost more exciting than the actual election, isn’t it?