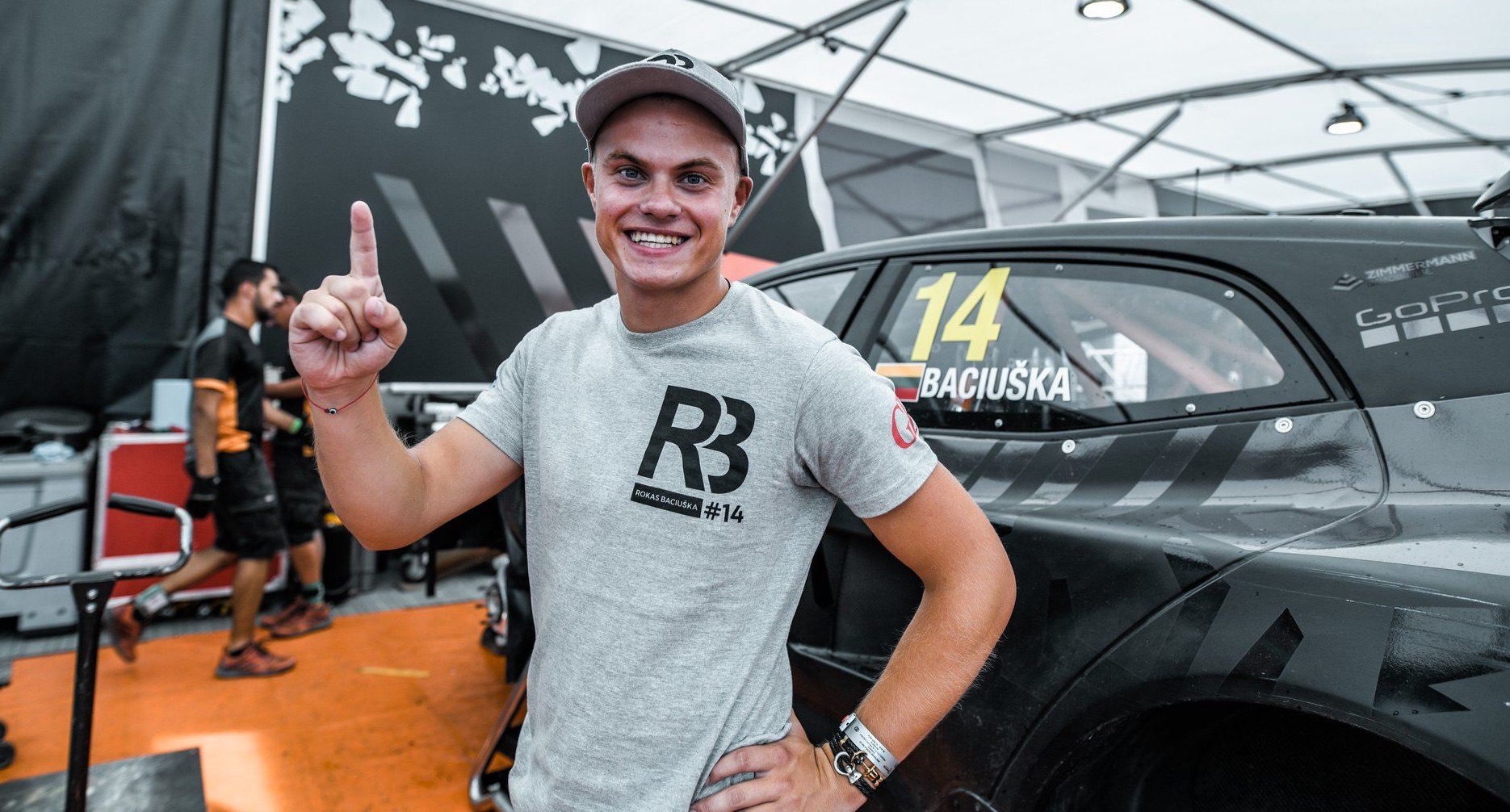 Motorsport in Lithuania, Latvia, and Estonia’s Age of Independence


In recent years, the three Baltic States - Lithuania, Latvia, and Estonia - have become permanent names on the FIA motorsport calendar, but just 30 years ago, these three countries wedged between Poland and Russia were still under Soviet occupation.

These nations have since survived economic collapse as they shifted from communism to the free market and since gaining independence, the three countries have firmly turned their backs on the Kremlin to look westwards. Since 2004, Lithuania, Latvia, and Estonia have been members of the European Union.

Given how and what these three countries have overcome and achieved over the last three decades, to have drivers and events represent them at the highest level of international motorsport is little short of incredible. 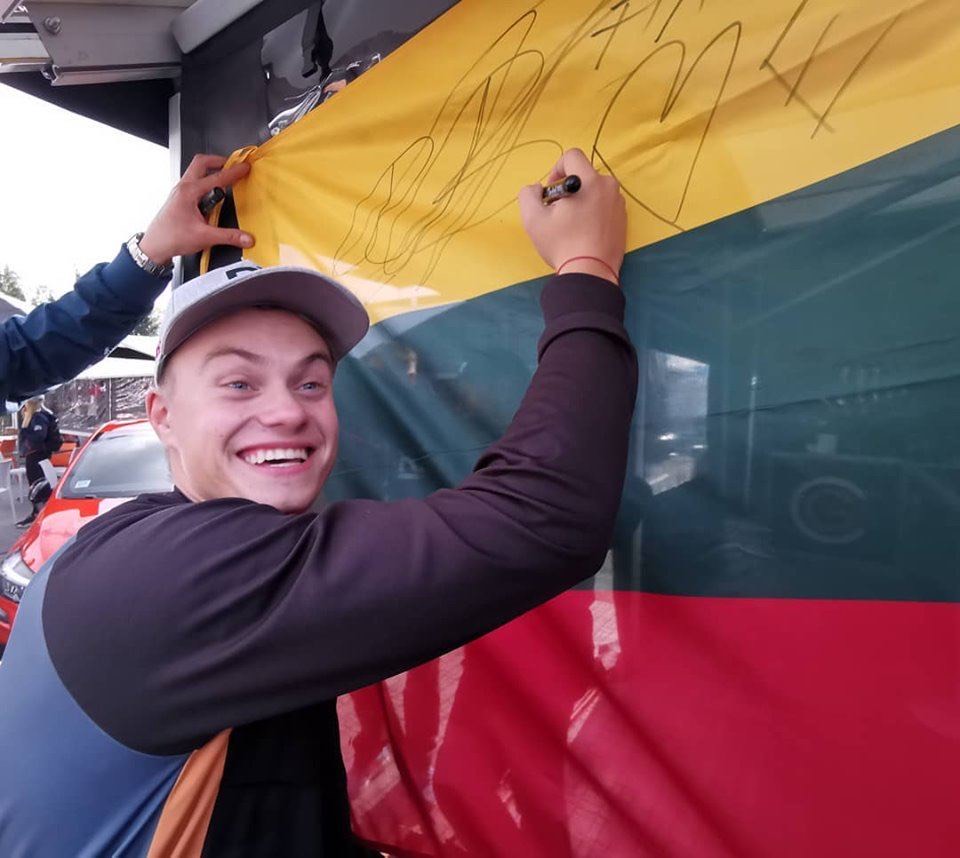 Baciuška signs the Lithuanian tricolour for fans at the World RX event in Riga - one of his favourite events on the series’ calendar
© Zilvarskas/15min.lt

Since 2016, Riga - the Latvian capital - has held a World Rallycross event at its centrally-located Biķernieki circuit.

Meanwhile, Ott Tänak has long-represented Estonia in the World Rally Championship. In 2019, he made history by becoming the first Estonian World Rally champion in the history of the sport.

Tänak was also the first driver not called Sébastien since 2004 to not win the title. In September 2020, Estonia - with its dense woodlands and fast, flowing, sandy forest roads - will also host a round of the WRC for the very first time.

But what about Lithuania? Despite being the largest of the Baltic nations, the country is arguably the least represented in motorsport terms. For over a decade now, Benediktas Vanagas has flown the yellow, green, and red tricolour for Lithuania in the Dakar with varied results, and Vaidotas Žala topped the event’s timing sheets earlier this year.

But apart from the Dakar, there hasn’t been much else to write home about for Lithuanian motorsport.

That was the case until 2018. That was until Rokas Baciuška arrived.

How Rokas Baciuška Shook up the Lithuanian Motorsport World


Following a successful karting career where he was crowned the Baltics Rotax and Lithuanian national champion, Baciuška graduated to World Rallycross with a part-time programme in 2017.

The following season, aged 18, he won the European Rallycross Championship Super 1600. It was his very first season in the sport, and his title win represented the first time in history that a Lithuanian won an international motorsport championship.

On the back of his title win, Baciuška graduated to RX Supercars - the top-tier of World Rallycross. His performances in Euro RX 1600 attracted the attention of 2016 World Rallycross champion Mattias Ekström who attempted to sign the youngster to drive one of his EKS-prepared, championship-winning Audi S1 EKS RX machines for 2019. 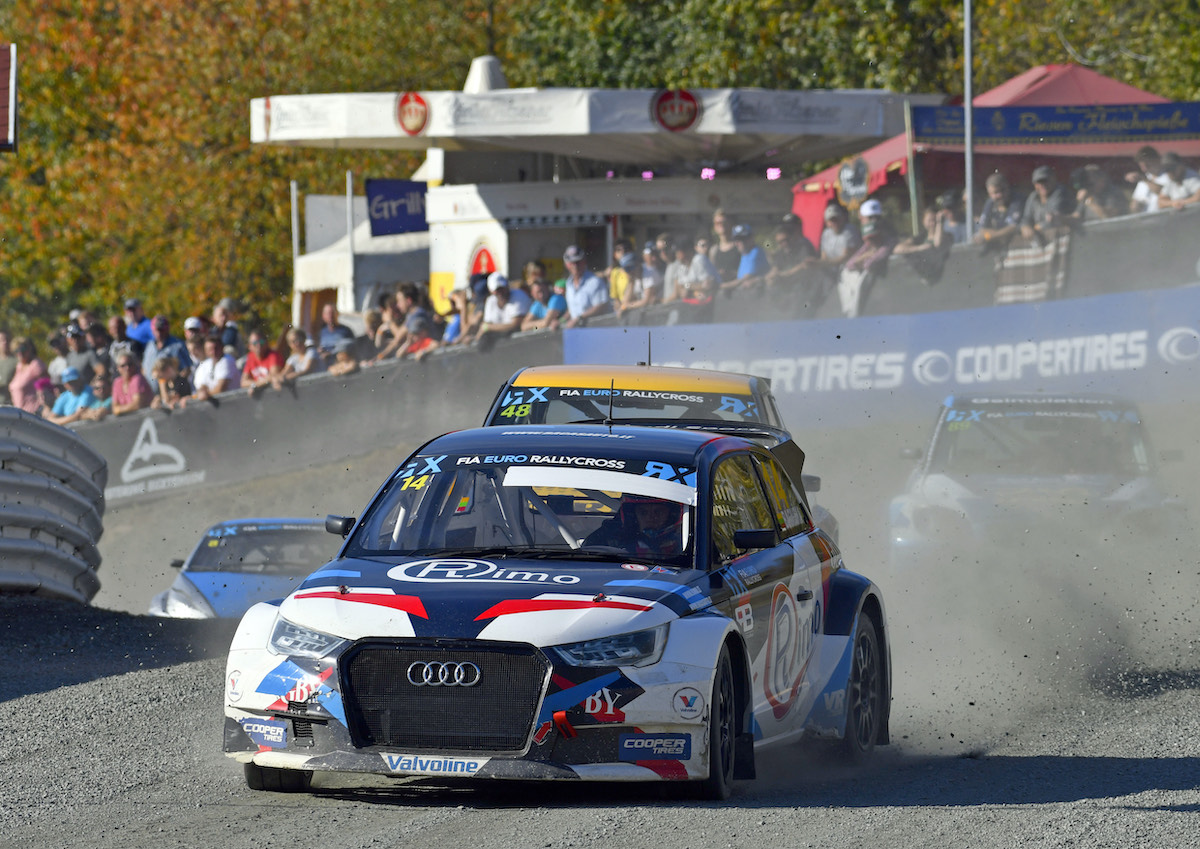 Baciuška eventually signed for the Lithuanian ES Motorsport team over EKS. At the opening round of the 2019 World RX season in Abu Dhabi, the youngster from the small town of Tauragė lined up on the grid in the team’s Škoda Fabia RX to etch his name into motorsport history as he became the first-ever Lithuanian to take a World RX supercars start.

Ahead of the fifth round of the 2019 championship in Hell, Norway, Baciuška split from ES Motorsport. He then switched to the GCK outfit to drive one of the team’s Prodrive-prepared Renault Mégane RX cars alongside team owner, French rally and rallycross driver, Guerlain Chicherit.

Following a low-key debut with the French squad in Norway, Baciuška opened his points account at Höljes in Sweden when he finished ninth overall and scored two points.

Again, he’d achieved something no other Lithuanian driver had done before - score points in a World RX event. He added a further two points to his tally at the next round in Canada and finished a career-best fourth at the following event at Lohéac in France. It was only a mechanical issue that robbed Baciuška of a maiden World RX career podium.

By the end of his debut World RX season, the Lithuanian finished 11th in the standings - ahead of previous event winners Toomas Heikkinen and Reinis Nitišs - on 76 points.


In 2020, Baciuška will head into his second full World RX season with GCK, which is now racing under the GCK UNKORRUPTED banner. The only thing that’s different is that the team has switched from the Mégane to the Clio. 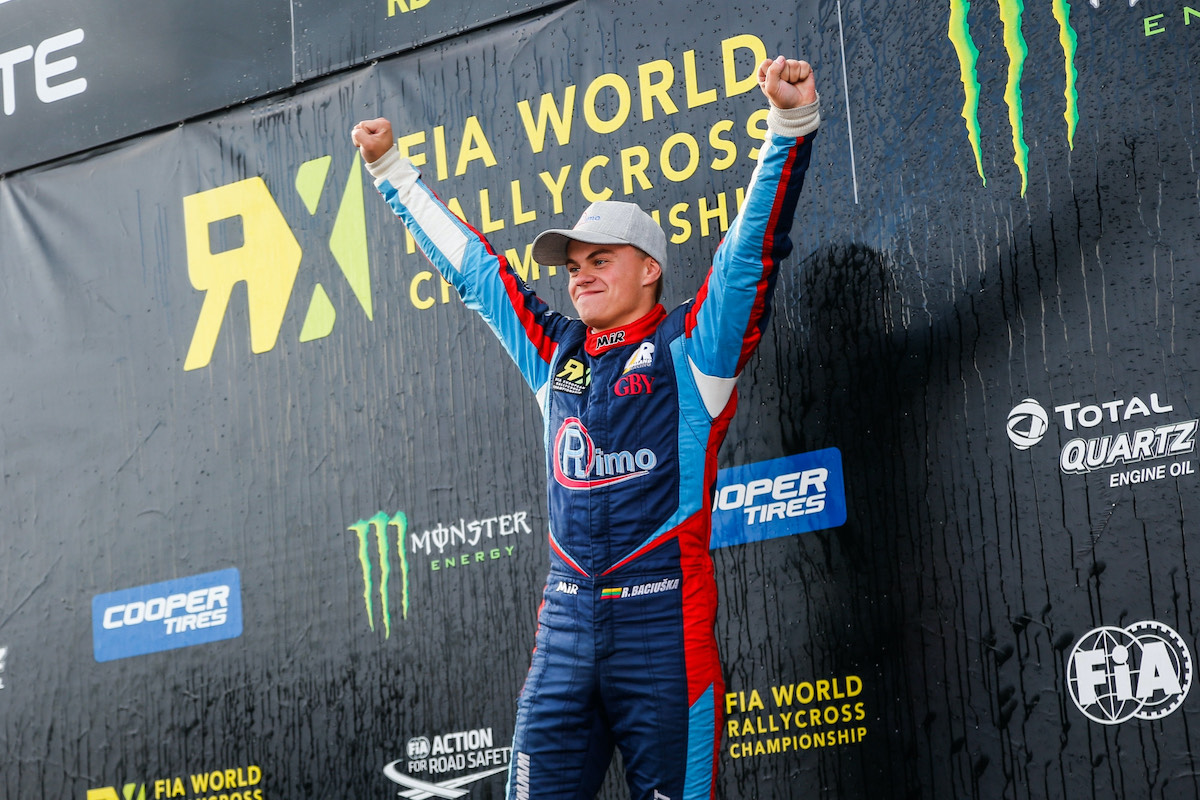 Ahead of the 2020 World RX season opener which takes place this weekend in Höljes, Baciuška explained to Dyler.com why he’s ready to get his elbows out this year. He’s also ready to further strengthen Lithuania’s position in international motorsport and set more records.

The 2019 World RX season was one of the closest-fought in years. From the 10-round calendar, six different drivers won events. Meanwhile, the title was won in a nail-biting season finale by Timmy Hansen who finished the season on equal points with Andreas Bakkerud. Hansen was eventually awarded the title on countback after winning four events to Bakkerud’s two.

“I really think that the title will be just as tight as last year, even more so,” Baciuška told Dyler.com. “Johan Kristofferson who won the title in 2017 and 2018 is also coming back to the championship, and I’m really looking forward to racing against him - I think his return will close the racing up even further.

“As for me, I don’t want to make any predictions yet but I’m not scared of the challenge this year at all. However, I’d be very happy to be in the title fight and I’ll do my best to be there from the season opener in Höljes.” 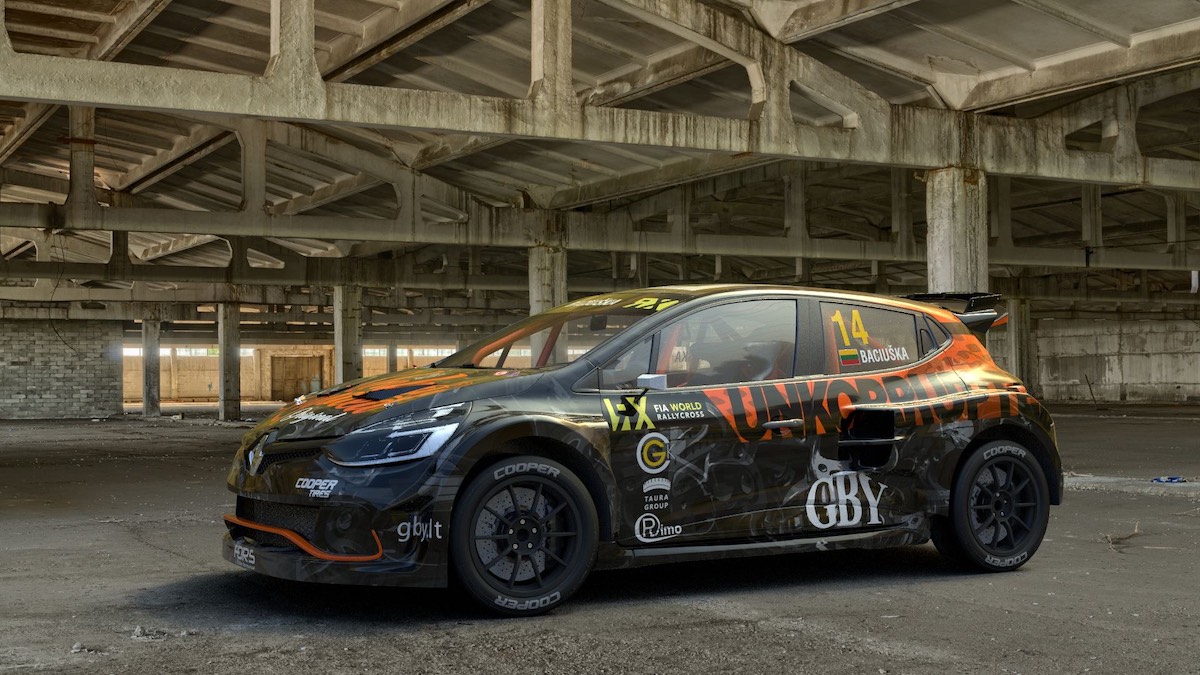 Same team, but new car and new colours for Baciuška in 2020
© GCK

When Baciuška speaks, he’s borderline shy in his answers. After all, Lithuania is known for being a nation of introverts. His replies to my questions are well-considered and modest. However, there’s underlying steeliness behind them.

Now in his second year with GCK, Baciuška has reason to be confident, too. He knows the team, and he knows its development plan for its new Clio RX.

“Starting the year with the same team as last season is a huge plus in our preparations, to be honest,” he continues. You know everyone, you understand each other, and you know what to expect. This gives you an advantage from the very first race because you can focus on just yourself, whilst you trust everyone else to do their job.

“This is why I’m not worried about switching from the Mégane to the Clio, really. It’s quite a bit different in terms of handling. It’s more agile than the old car because it’s smaller and we’ve added new dampers and a new gearbox. In terms of outright performance though, it’s not too different at all.”


Along with his speed, Baciuška’s ability to focus on himself at just 20 years of age is one of the reasons why Mattias Ekström believes the Lithuanian to be the future face of World RX.

“Rokas’ ability to focus on himself is remarkable,” Ekström explained to Dyler.com. “He’s also got this “eye of the tiger” mindset and he’s always up for a fight. The pace he showed in the few outings he had last year was also amazing. He also came to the EKS driving academy in Sweden this winter and I noticed that he works really hard. I like him a lot.”

It’s evident that the Lithuanian and the Swede enjoy a close relationship. Baciuška reveals that Ekström’s experience as a champion in the DTM and World RX has been key to his development as a rallycross driver.

“Mattias is one of the leading authorities in motorsport, and one of the fastest drivers in the world,” Baciuška says with a wide, infectious smile. “Along with Rolf Volland, Mattias has been close to me since the very first meters of my rallycross career, and he’s helped me a lot in terms of mental preparation. I am very, very, very happy to know him.”

The Future for Lithuania and International Motorsport


With the backing of a world champion and an infectious personality that just screams “I’m happy to be here,” it’s impossible to dislike Baciuška. It seems appropriate to finish the interview with a question about how he sees Lithuania represented in international motorsport in the future. 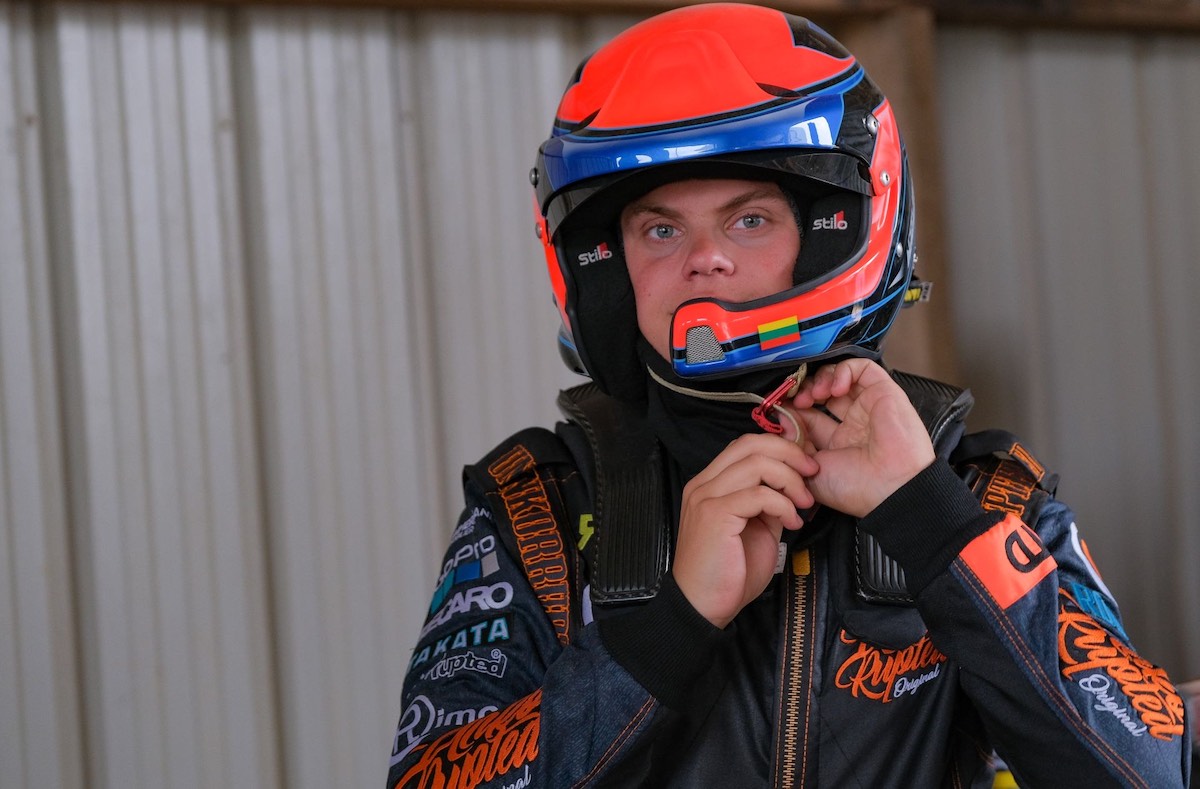 “Well,” he concludes thoughtfully with a wide grin. “Estonia has its own Ott Tänak, and Latvia has its own RX event in Riga which has been voted the best race of the year for the last couple of seasons. I think it’d be nice if we could say Lithuania has its own Rokas Baciuška.”

There is every reason to believe that sooner than later we will.

To keep up with Rokas in World RX, follow him on Facebook here, and on Instagram here. Away from the circuits of the World RX championship, Baciuška drives a Subaru Impreza WRX, a machine he describes as “a car with a soul.” He also owns an ultra-rare Ford Focus RS 500.

Should you wish to take a look at any of the production versions of cars mentioned in this feature, please head to Dyler.com.