33 Stradale is one of the most sought after cars in the world. It makes perfect sense, as it is essentially a successful race car dressed with a gorgeous body. On top of that, it even was the most expensive car when it came out. With only 18 of 33 Stradales produced and even fewer in existence today, you’re unlikely to come across one – even Alfa Romeo museum stores a replica. We attempt to fill in this gap and provide vital knowledge about this crème de la crème Alfa.

Lusted by many, owned by a lucky few

33 Stradale debuted in 1967 Turin Motor show and caused quite a stir. It is not much of surprise, as it boasted a modified chassis from Alfa Romeo Tipo 33 and stunning styling by Franco Scaglione . 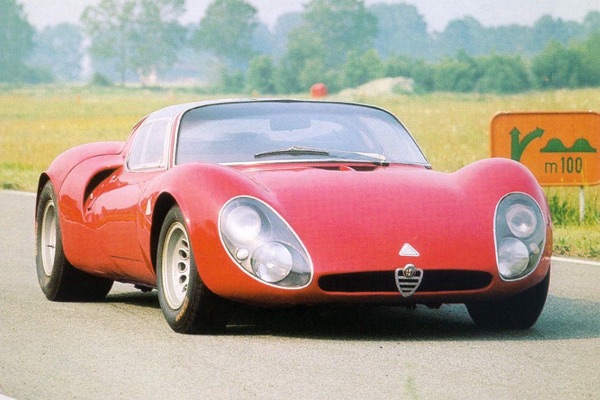 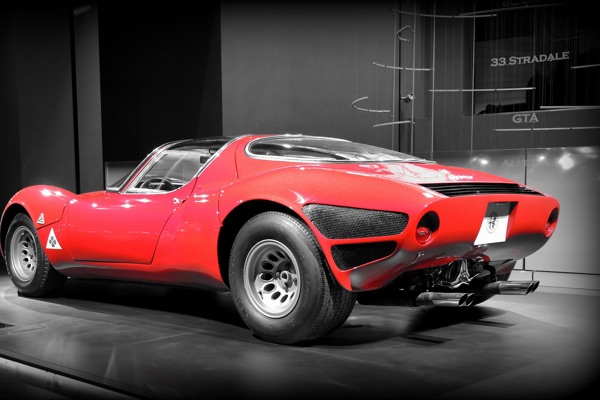 Each 33 Stradale was handmade, and differed very slightly
© FCA

Stradale literally means “street-going” denoting what is meant for, meanwhile Tipo 33 platform was used by Alfa for many years, proving to be a very successful base for a racecar. Consequently, 33 Stradale was the fastest road car the money could buy in 1967 – the car held a standing kilometer record at 24 seconds. The reason for that is a race-derived flat plane crank V8, spinning all the way to 10 000 RPM. It accelerates to 100 km/h in 5.5 and tops out at 260 km/h. Clearly then, low curb weight (Stradale tips the scales at 700 kg) and low slung aerodynamic body play their part. 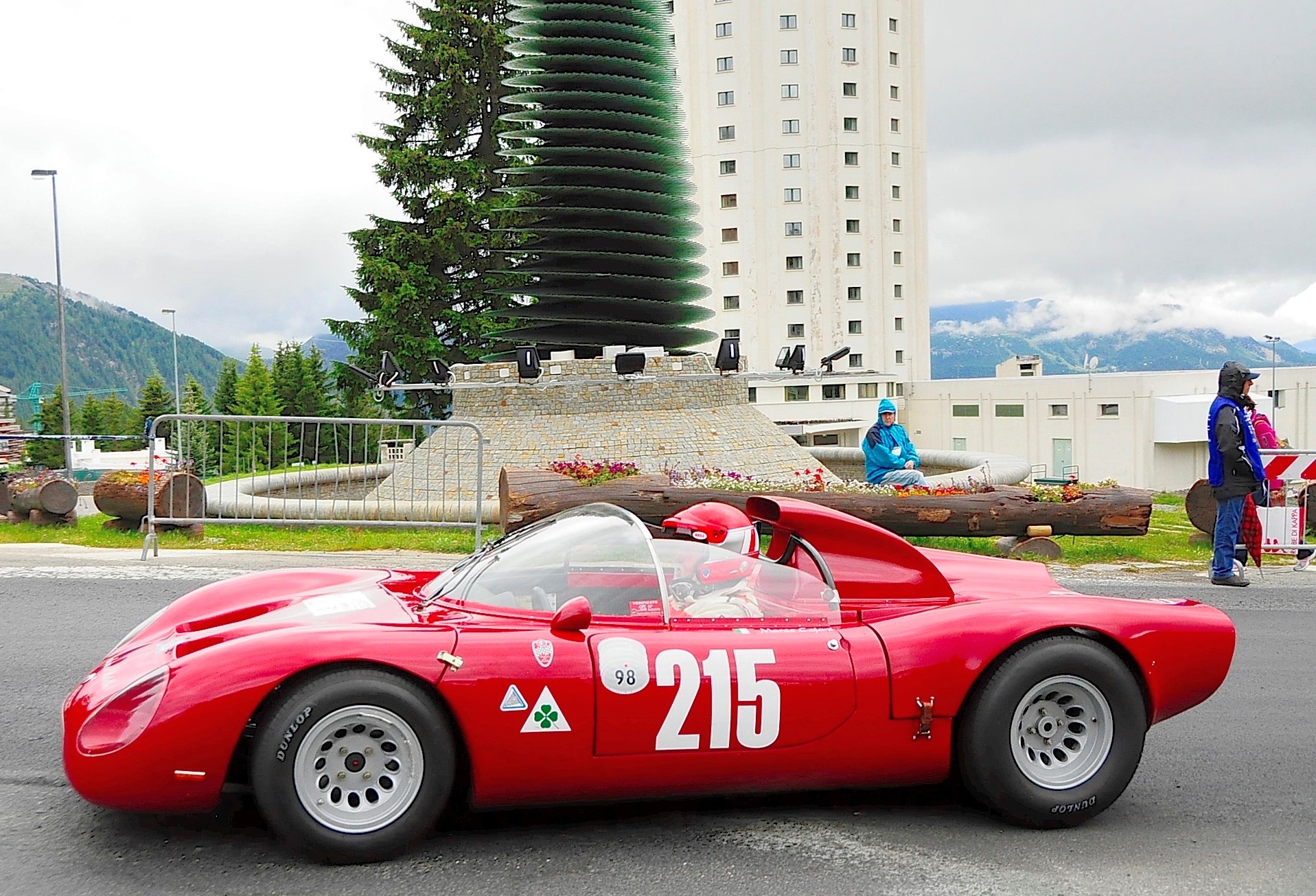 Tipo 33 was a base for Stradale
© FCA

Talking about the body, its design, as mentioned, comes from Scaglione. The man has penned such cars as Lamborghini 350 GT and Alfa Romeo Giulietta Sprint, but 33 Stradale is arguably his finest work. It has gorgeous curves, mean proportions and those dihedral doors that wrap into the roof – a first time they were used in a production car. After all, the enthusiasts have been drooling over the styling of 33 Stradale for decades now. I would bet somebody has fainted after seeing one in flesh. 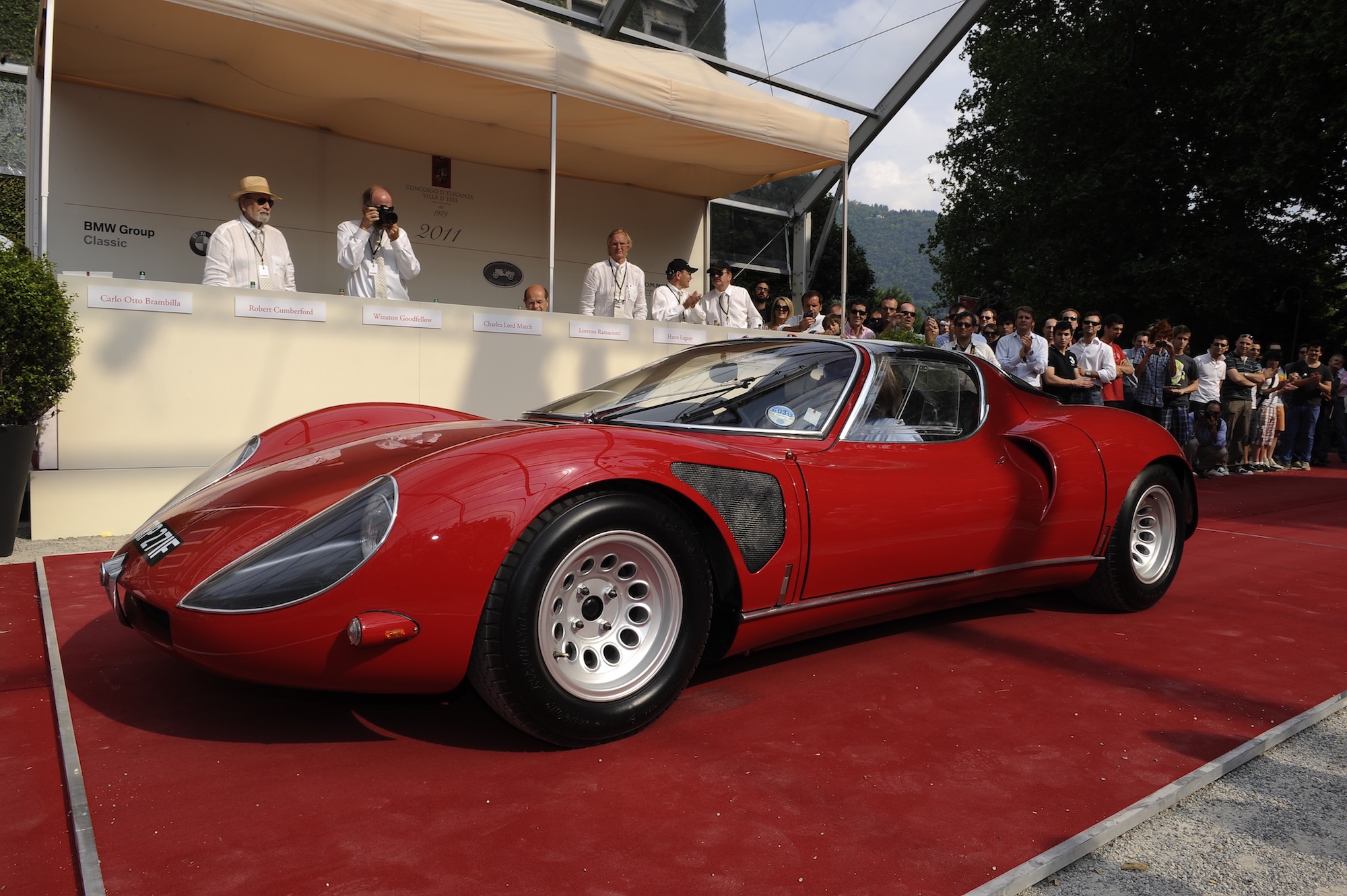 According to many, it is the prettiest Alfa Romeo
© Concorso d'Eleganza Villa d'Este archive

Chances of some poor souls fainting were minimized by making the car extremely exclusive. As mentioned earlier, only 18 were manufactured in 1967 and 1968. In addition to that, 33 Stradale was the most expensive car in the world – the price tag read $17,000, roughly 6 times more than an average automobile at the time. Unsurprisingly, now they mostly spend their days in air-conditioned garages just to be taken out on a concourse lawn once in a while. Here you can see one of around eight Stradales left doing exactly that:

The steep price tag was justified not only by the rarity of the Stradale – it has very advanced technology for the time, think of it as LaFerrari half a century ago. The motor is undoubtedly one of the main features – although it only has 2 liters in capacity, it squeezed out around 250 bhp. This comes as a courtesy of such technology 4 chain-driven camshafts and twin spark plugs in each cylinder. In comparison, Miura had twice the displacement, but could not keep up with the lightweight high-tech 33 Stradale. 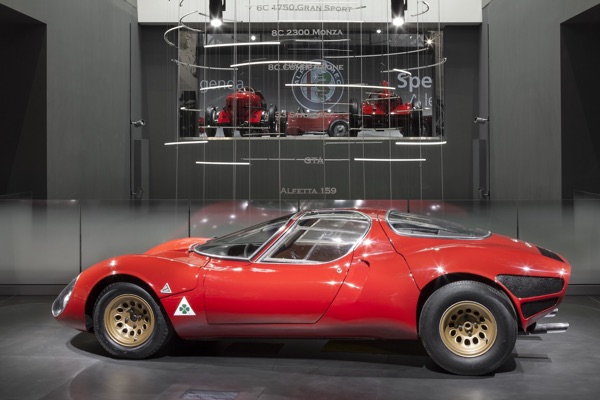 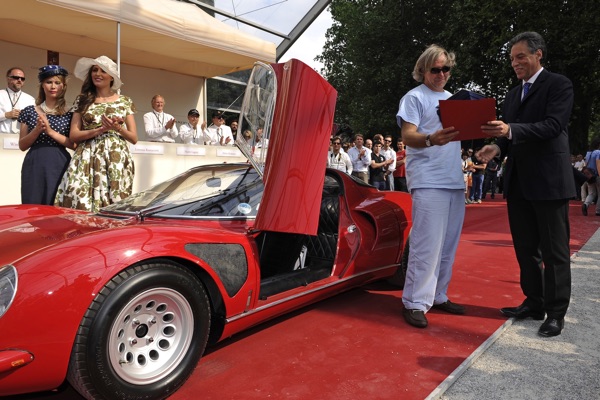 33 Stradale is very much race-car like in other respects as well. It has a featherweight aluminum tube chassis with a hand shaped aluminum body. It does have a different wheelbase from track-going Tipo 33, 10 cm longer to be precise. Just like the race car, Stradale boasts disc brakes in all four corners, rear ones being inboard to reduce unsprung weight. Mass is further minimized with small yet wide magnesium wheels, the rims are only 13 inches in diameter, but 8 (front) and 9 (rear) inches in width. Lastly, the suspension is largely what one would find on race cars from the era – double control arms upfront and trailing arms in the rear.

Curiously, Alfa did not stop improving Stradales even during the short production run. Being hand built, these cars constantly received minor adjustments, and thus no two are the same. For instance, later cars received additional cooling ducts behind front and rear wheels to improve the brake ventilation. Less notable changes included numbers of headlights, wipers and positions of minor details. 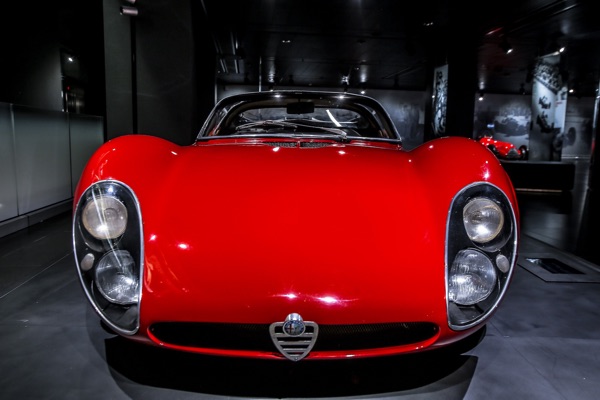 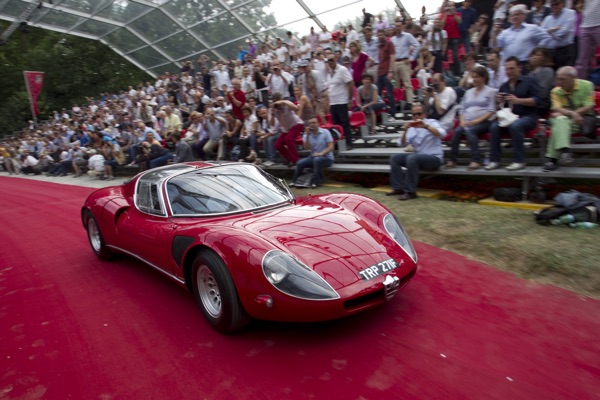 Not all of the 33 Stradales ended up driven by 1960s playboys, five were used by Pininfarina, Bertone and Italdesign. Low and wide tube chassis lent itself well to brave concepts by the Italian coachbuilders. There is no denying, it is much cooler to have a race car chassis and motor to power your design study, rather than present an immobile plastic shell with blacked-out windows. 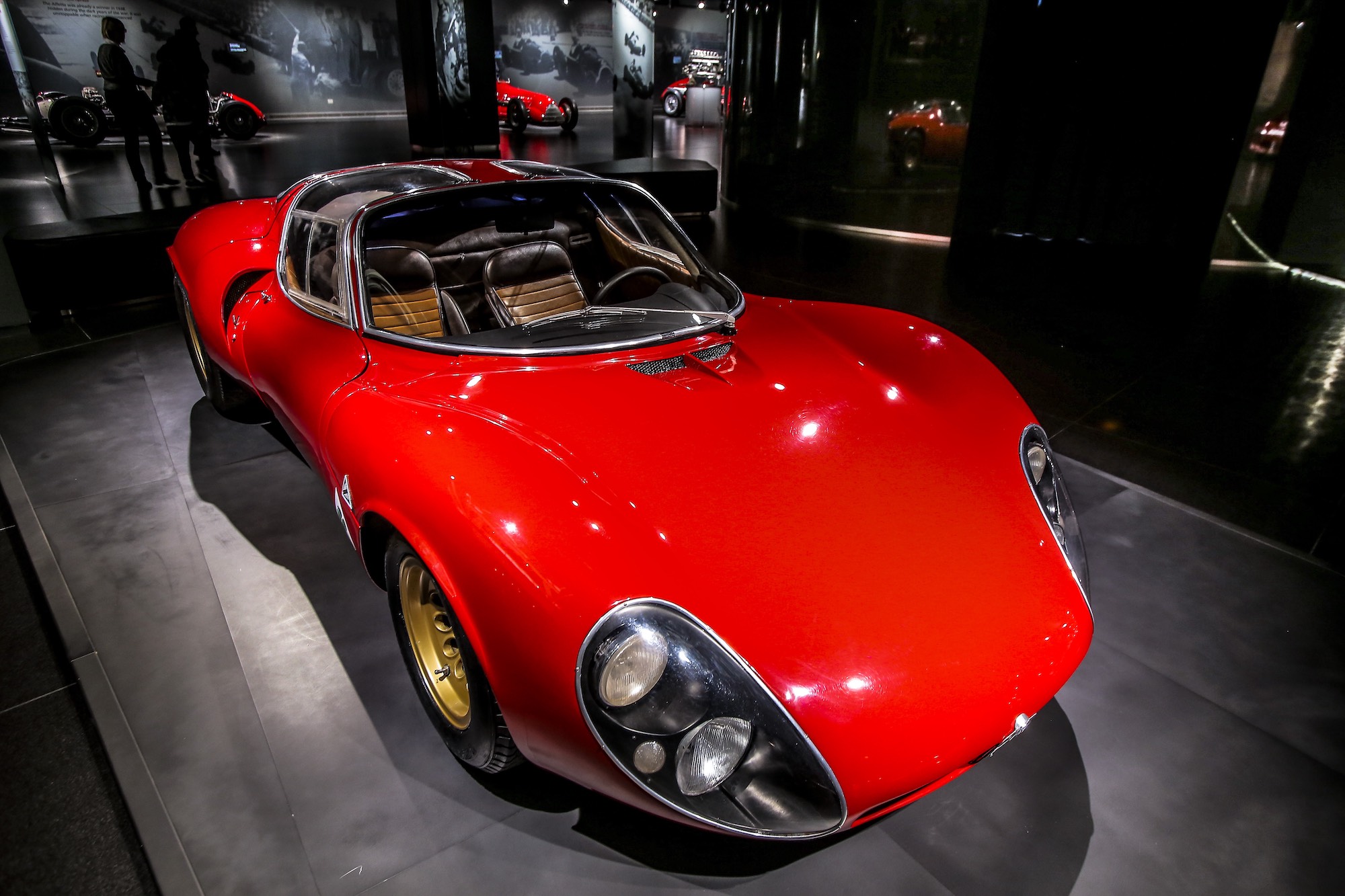 Arguably, all six of the concepts produced on 33 Stradale chassis are interesting, but Bertone’s 1968 Alfa Romeo Carabo is the most striking. It was a pioneer of the wedge and rectangle design theme, which would later define 1970s and 1980s. Penned by Marcello Gandini, the green Carabo concept was shocking and challenging, but it arguably started a trend that would shape cars starting with Lamborghini Countach, ending with MkII Golf. 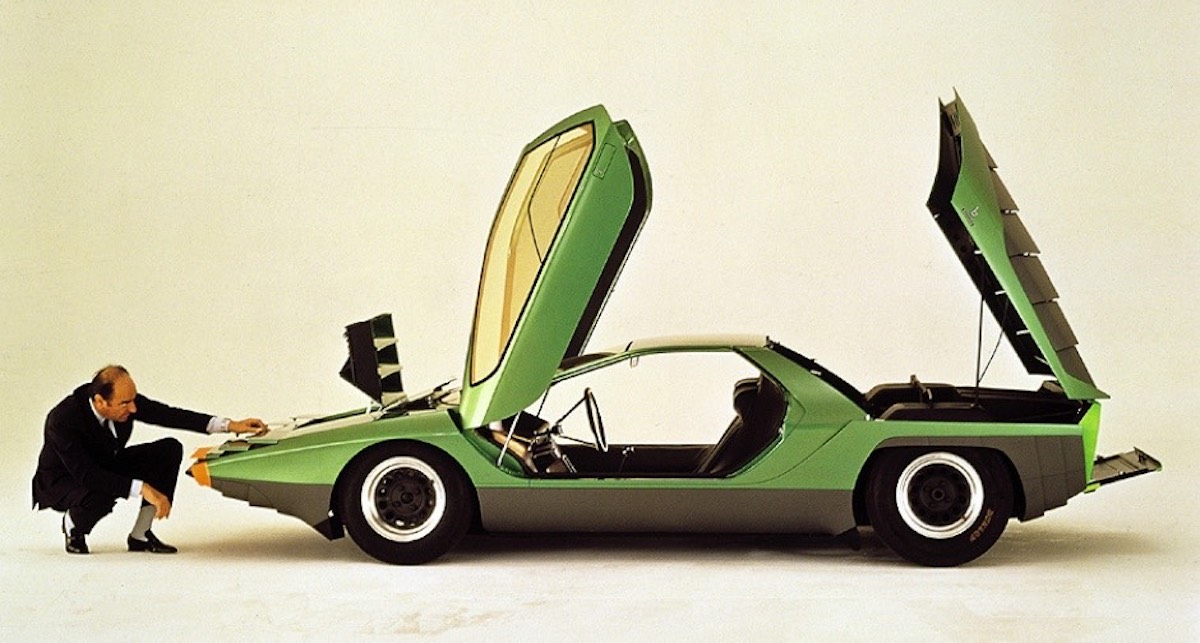 If you are now dreaming of owning a 33 Stradale, you are strongly advised to stop that for your own good. They are estimated to cost around 10 million dollars these days, if they ever changed hands. Problem is, this is quite unlikely to happen – their owners like holding on to them. So if you happen to even see one of these Italian rarities in some event, make sure you spend enough time appreciating the craftsmanship that went into them. You are unlikely to get another chance.