It was early 70s and Fiat were planning on replacing their smallest sports car, 850 Spider. Bertone pitched an idea of developing a car based on their Autobianchi Runabout concept but using the front-wheel drive Fiat 128 running gear to cut costs. The clever bit was that the engine would be crammed behind the seats and power the rear wheels, making it a true classical sports car. I could not find the record of how this Fiat and Bertone executive meeting ended, but it was probably finished by a reluctant “ok” from the Fiat side.

The manufacturer was not very heavily invested in the development of the new vehicle. Fiat did not even bother to give it a sportier engine than the asthmatic 1.3-liter unit from their pedestrian 128. What is more, when X1/9 project was ready to debut in 1972 Turin Auto Salon, its public outing was postponed so it would not steal the thunder from the Fiat 126 city car. Fiat did not even plan on selling many X1/9s, so they did not build the bodies themselves, instead leaving it to Bertone, where smaller production runs were more sustainable. 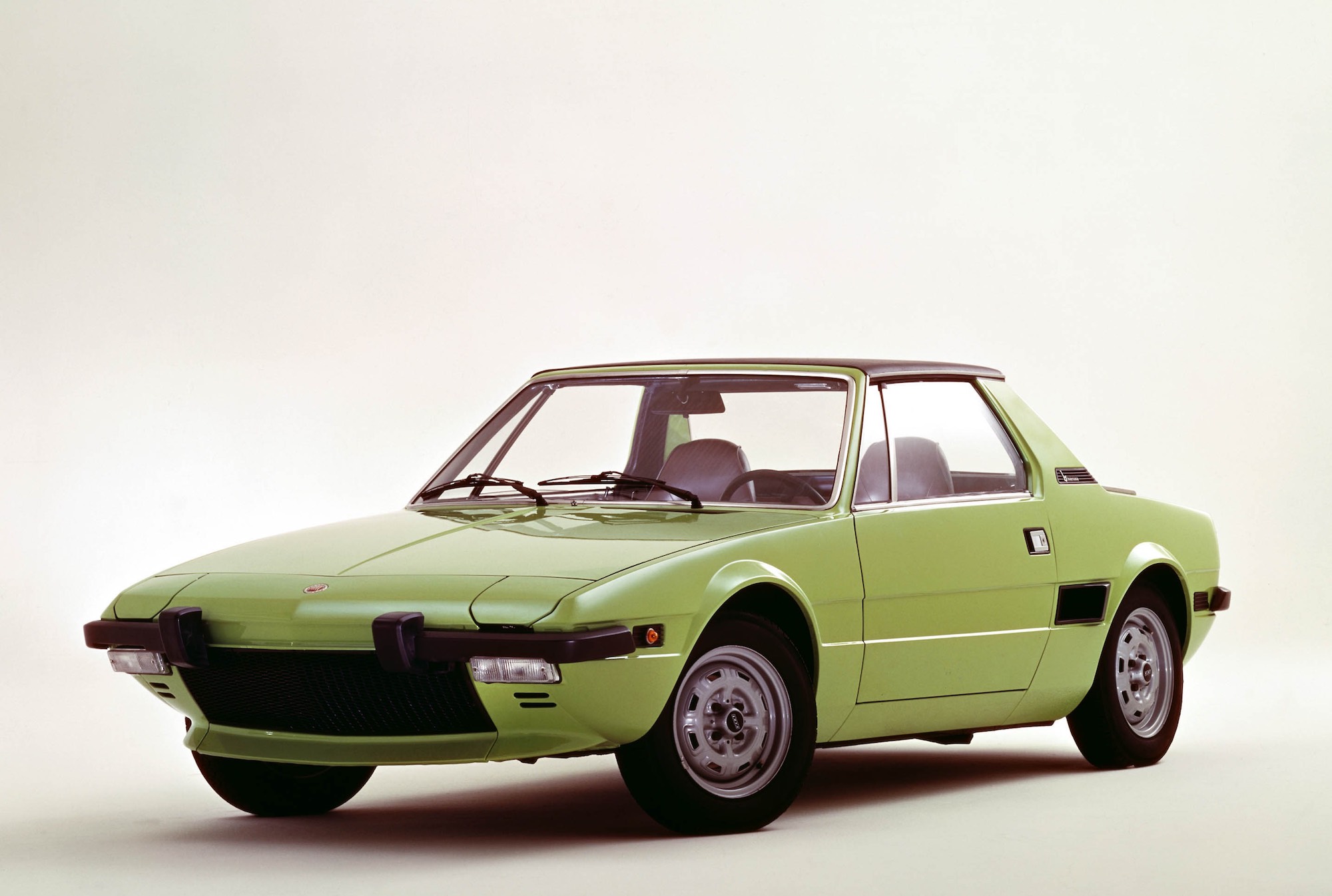 Looking retrospectively, it is hard to see how Fiat were so unwitting of the car’s full potential. After all, it was a small well-balanced sports car penned by Marcello Gandini, the godfather of the 70s wedge craze (designer of Alfa Romeo Carabo and Lamborghini Countach). Not only was the motor moved to the center to ensure perfect balance, fuel tank and spare tire were tucked behind the seats to move even more of the weight inboard. In addition to that, Bertone opted for a Targa Top design in fears of US safety requirements becoming more stringent. Consequently, X1/9 boasted the rigidity and safety of a regular car while still offering the joys of open top driving, with space for the roof in front of the car. This sports car package was finished off by disc brakes and independent suspension in all corners. 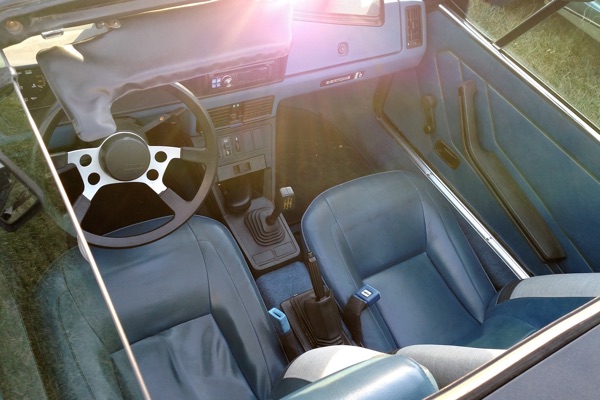 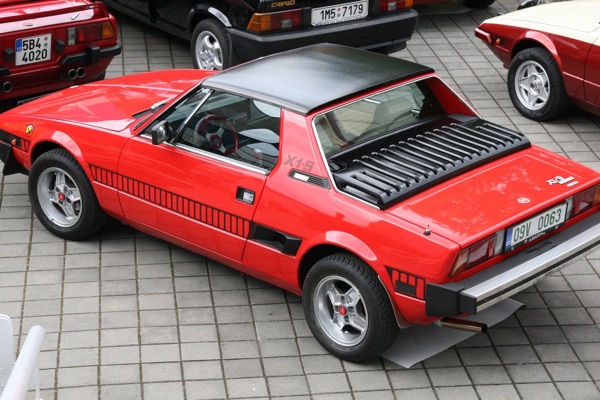 The best part? This tiny was the cheapest mid-engine car on offer, costing even less than a cut-price Porsche 914, one could get a X1/9 for less than $4,000. At least Fiat were well aware of this advantage and made it the main selling point. A quick internet search would return you with a bunch of ads emphasizing this benefit or even shamelessly comparing the X1/9 to the likes of mid-engined Lamborghini Countach and Ferrari 308.

Unsurprisingly then, there was a whole industry of bodykits meant to make X1/9s look like more expensive sports cars. For instance, companies like Schult and Eurosport offered kits that would transform X1/9 into a tiny Ferrari Testarossa lookalike, long before people were making fake Ferraris from Pontiac Fieros and Toyota MR2s. 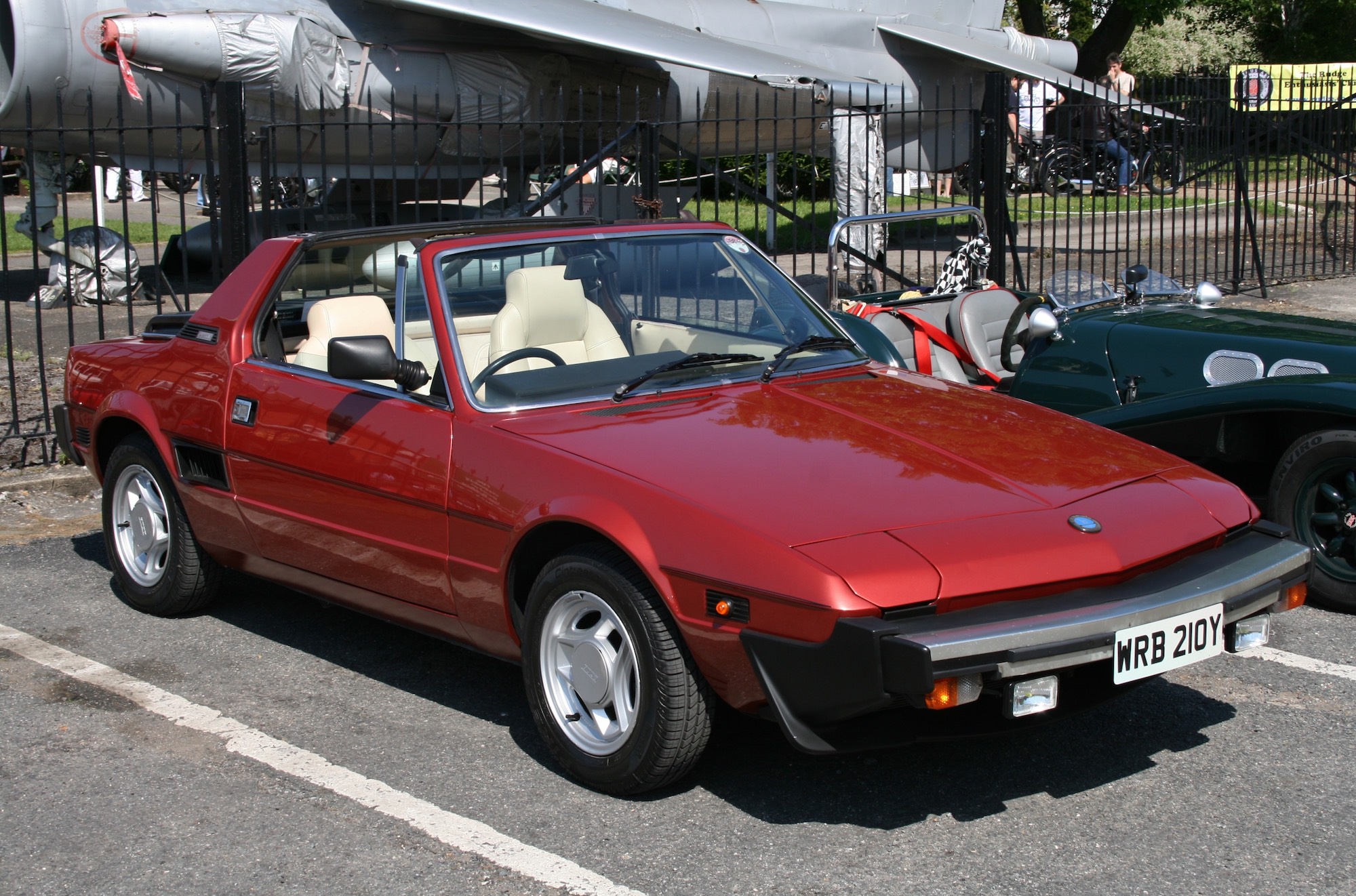 So why didn’t the X1/9 become an instant best seller, with its sports car handling and styling for a fraction of the price? The lethargic Fiat 128, 75 bhp engine was the main drawback of X1/9. Acceleration-wise, the roadster could not compete with other sporty cars. Later introduction of 1.5-liter engine did not make much of a difference – even when the carburetors were replaced by fuel injection, this engine squeezed out 85 bhp. By that time, even Golf GTI offered superior performance. The X1/9 was meant for those who prefer neutral sporty handling to neck-breaking acceleration. 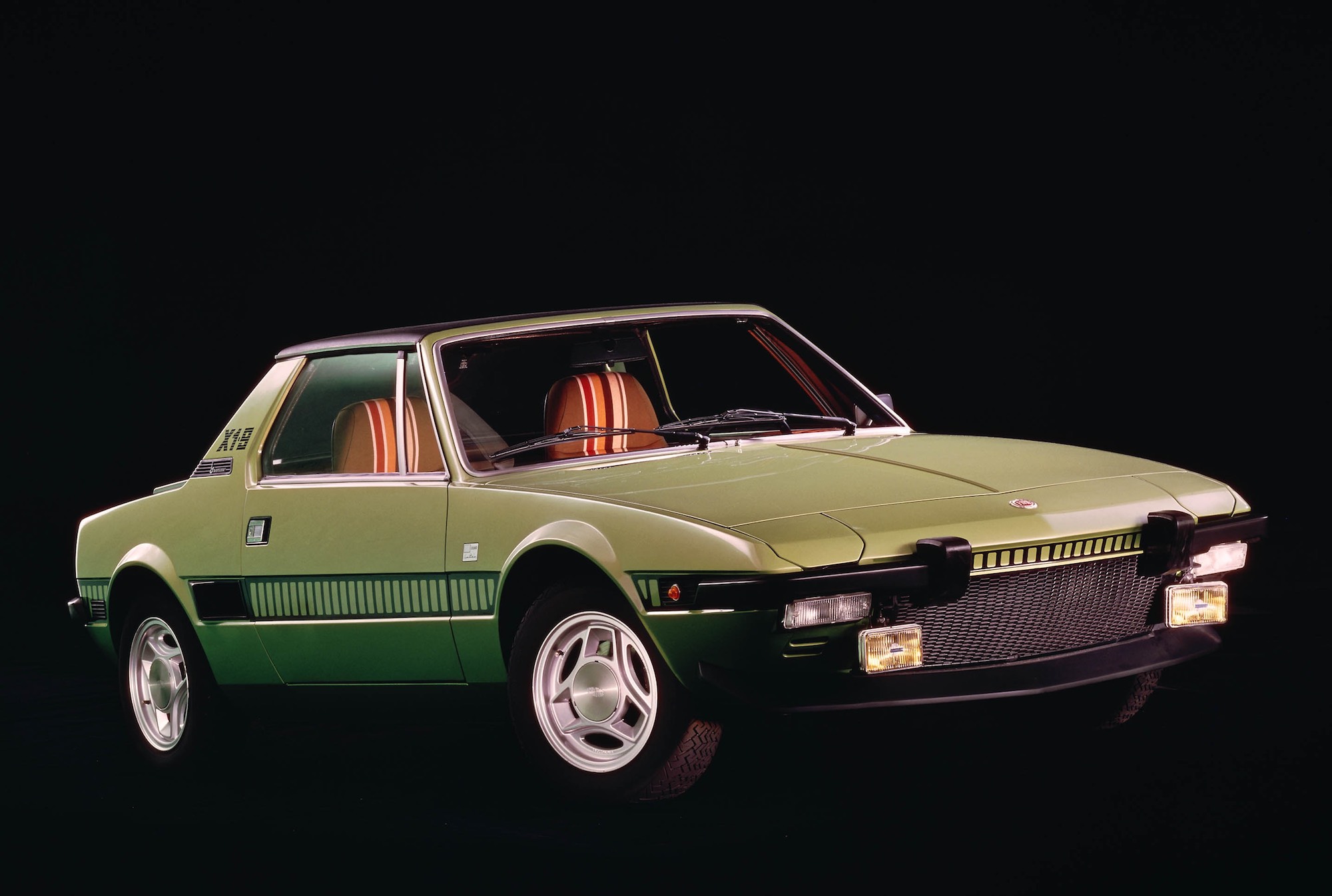 Several race teams decided to exploit the capable chassis of X1/9 and breathe more power into it. Most potent example was produce by Italian racing gurus from Dallara. They built a custom 16V engine, fettled with X1/9 suspension and gave the car an aggressive wide bodykit. The final result was Dallara Icsunonove (literally meaning “X1/9” in Italian) and it competed in Group 5 touring car championships. Fiat’s in-house tuner Abarth were fettling with the little roadster as well. They were planning to use X1/9 Prototipo with 1.8 liter 16V engine for rallying, but eventually, 131 Abarth was chosen instead. 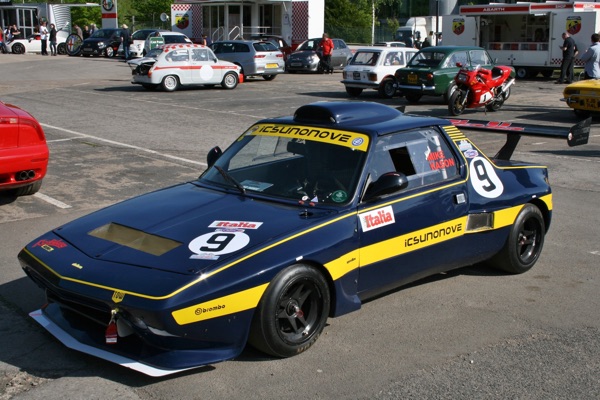 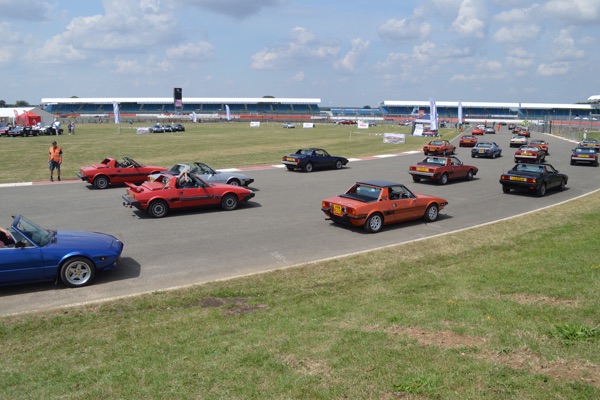 By 1982, Fiat officially ditched their rather unloved X1/9, but the production continued under Bertone’s name. Bertone badged cars were sold up until 1989. In total, 150,000 Fiat X1/9s were sold and 50,000 of their Bertone siblings. Despite the fact that there was no successor to X1/9 from Fiat themselves, many other manufacturers offered cheap mid-engined thrill machines in the years to follow. Think of Honda Beat, MG TF, Pontiac Fiero or three generations of Toyota MR2. 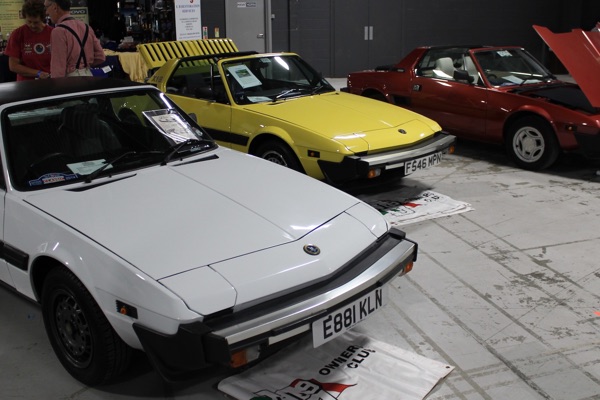 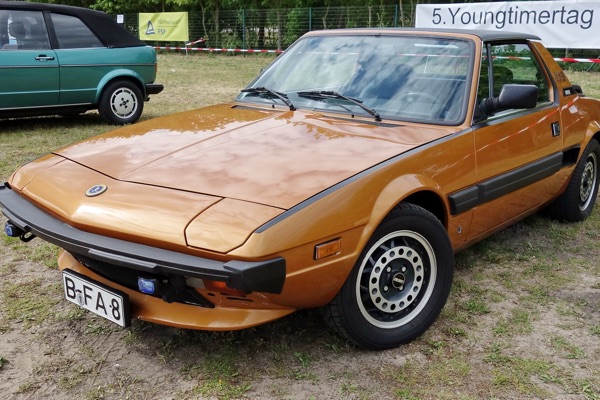 Just like when it was first sold, X1/9 is still the cheapest way to get a mid-engined car with Bertone styling. This wedge-shaped package can still ensure cheap thrills and as little as EUR 5,000 can get you a decent X1/9.