Fiat 850 Spider is not so obvious of a choice when it comes to small Italian roadsters. This rear engined two seater was a luxurious version of an ordinary 850 saloon, with a body designed and manufactured by Bertone. Although 850 Spider does not have a cult following Fiat 124 Spider or Alfa Romeo roadsters have, it works wonders when letting one Dutch Fiat aficionado to occasionally live la dolce vita in often rainy and gloomy Holland.

I have met Frank, the owner of Fiat 850 Spider pictured here, sitting in a café by a canal just outside of Rotterdam. Narrow windy roads, following the lines of Dutch waterways seem just as natural for this Spider as rural Italian serpentines would be. 850 Spider is tiny in proportions, making it extremely spritely in tight roads or narrow Dutch streets. The car even looks like a small boat, thus shooting it on the streets of central Rotterdam that were once canals, seemed appropriate. 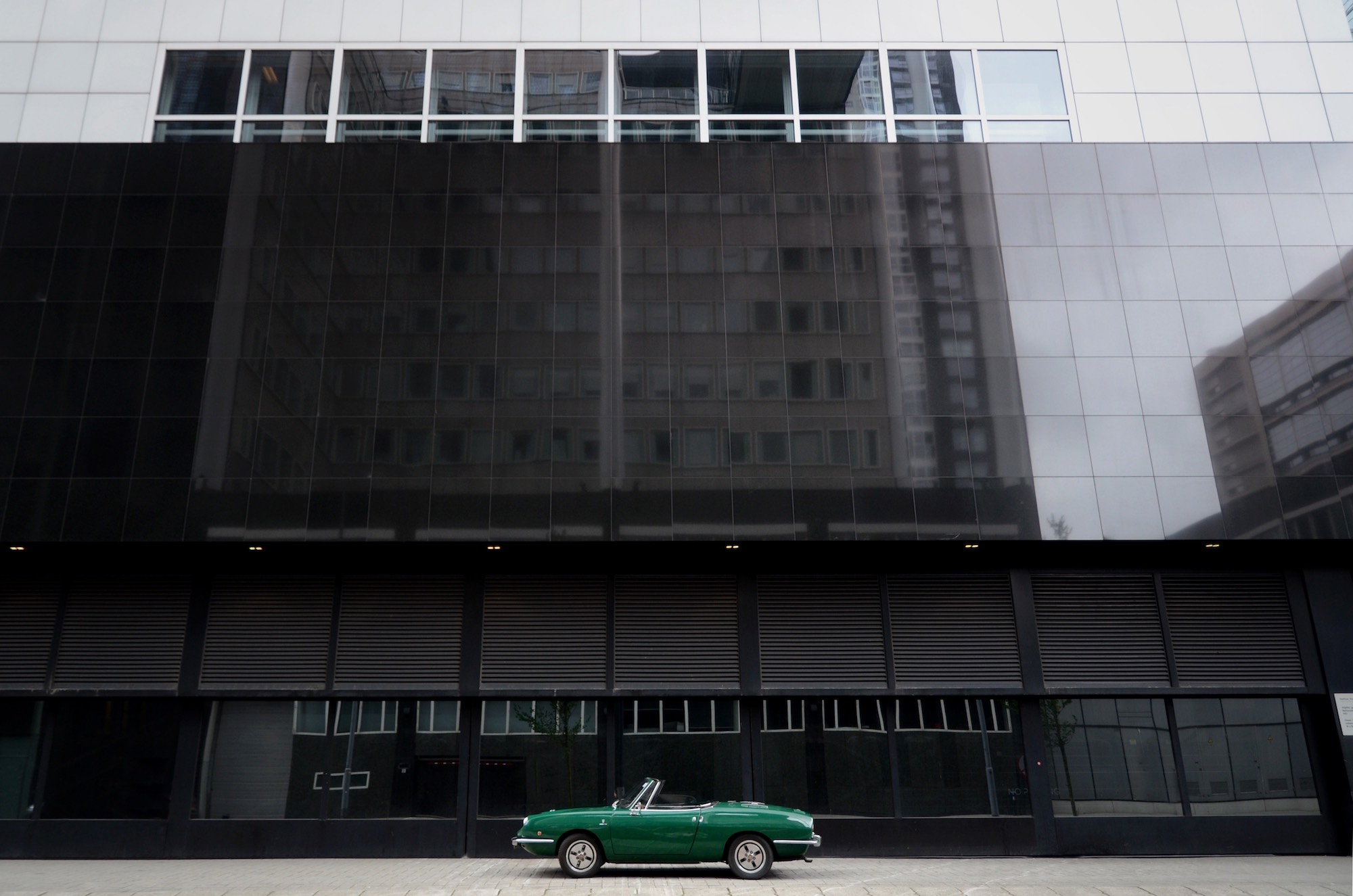 With its tiny proportions and lively engine, this spider fits well both in the Dutch streets and roads outside the city
© Domantas Mizeikis

While driving there, small engine in the back is buzzing and truly adds to the experience. Compared to other versions of 850, Spider’s engine was the most eager – putting out 49 bhp in earlier versions and 52 bhp, in later models (as the one you see here). The 903 cc (earlier cars had 843 cc) water cooled engine sounds very determined and honest. While photographing the car, we were passed by a couple of Golf Rs with their loud exhausts and over exaggerated backfire noises, in contrast, 850 sounds strikingly genuine and lively.

Not your ordinary people carrier

Roadsters’ motors were not the only feature differentiating them from your run of the mill 850. This small car for the masses was an evolution of the popular Fiat 600 and came in a variety of body versions including saloon or van. Depending on the year of production, regular 850s had either 34 or 37 bhp engines and drum brakes all around, whereas Spiders came with discs up front. 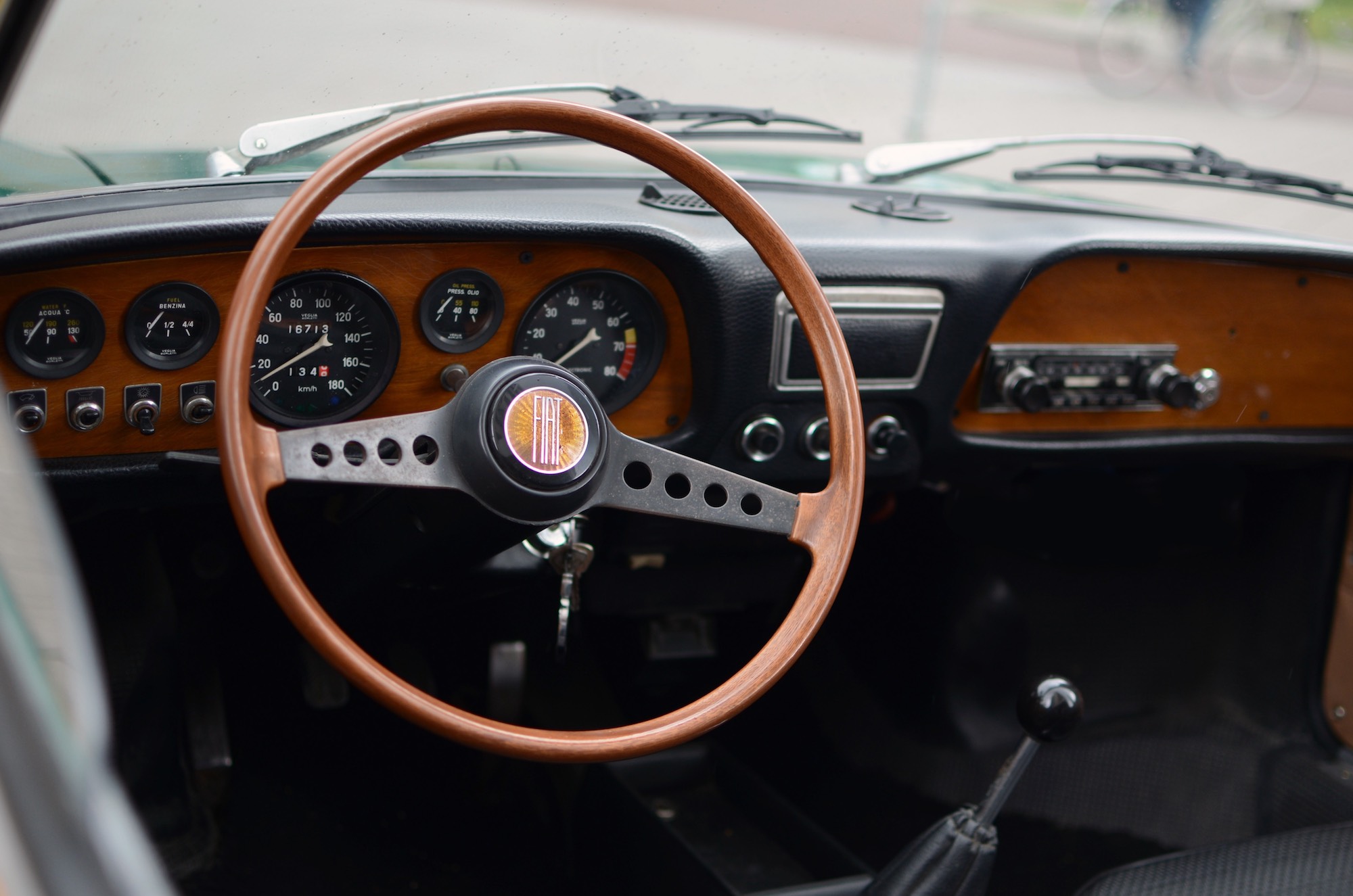 Although the interior of the Spider is not what one could call luxurious with vinyl seats (Frank even uses a little pillow to increase the comfort of his roadster) and leather pattern plastic dash, it was still a step up from other 850s. Unlike its siblings, 850 Spider sported a whole different instrument panel and round gauges. To be precise, the car pictured here is an 850 Spider Sport, a slightly refreshed version with more powerful engine, minor brake improvements and different headlights. The last feature helps to easily identify the updated version – pre-1968 cars had flush headlights under transparent covers while later Spiders got more efficient vertical headlights you see here. 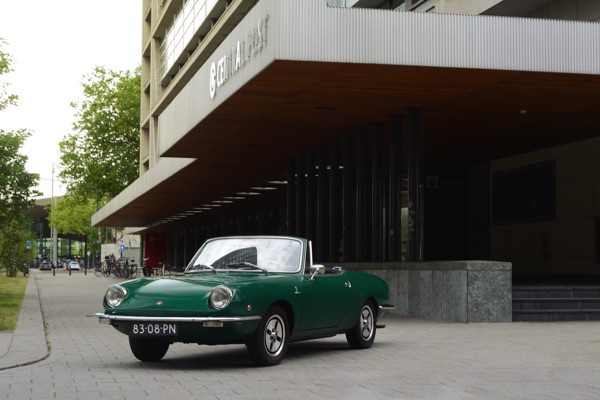 This is a later version of 850 Spider, distinguished mostly by its vertical headlights
© Domantas Mizeikis 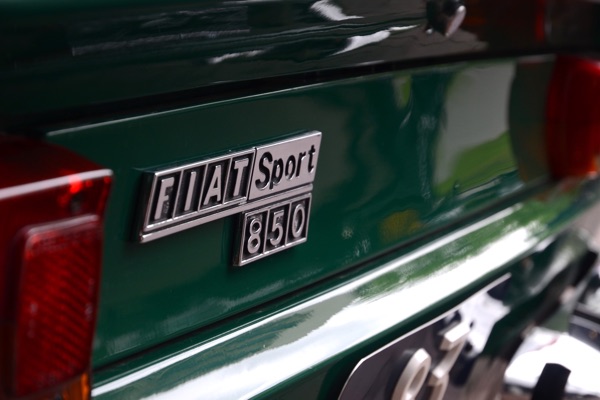 Penned by an absolute design icon, Giorgetto Giugiaro, this tiny roadster has smooth flowing lines and good proportions. Perhaps the weirdest feature of the design is a long front overhang, especially considering that engine is in the back of the car. Because the front wheels are so far back, their wheel wells extend into the foot wells of both driver and passenger, making them both turn slightly toward the center of the car. Consequently, the pedals are not in line with the steering column and are shifted right, something that is encountered in quite many vintage cars. 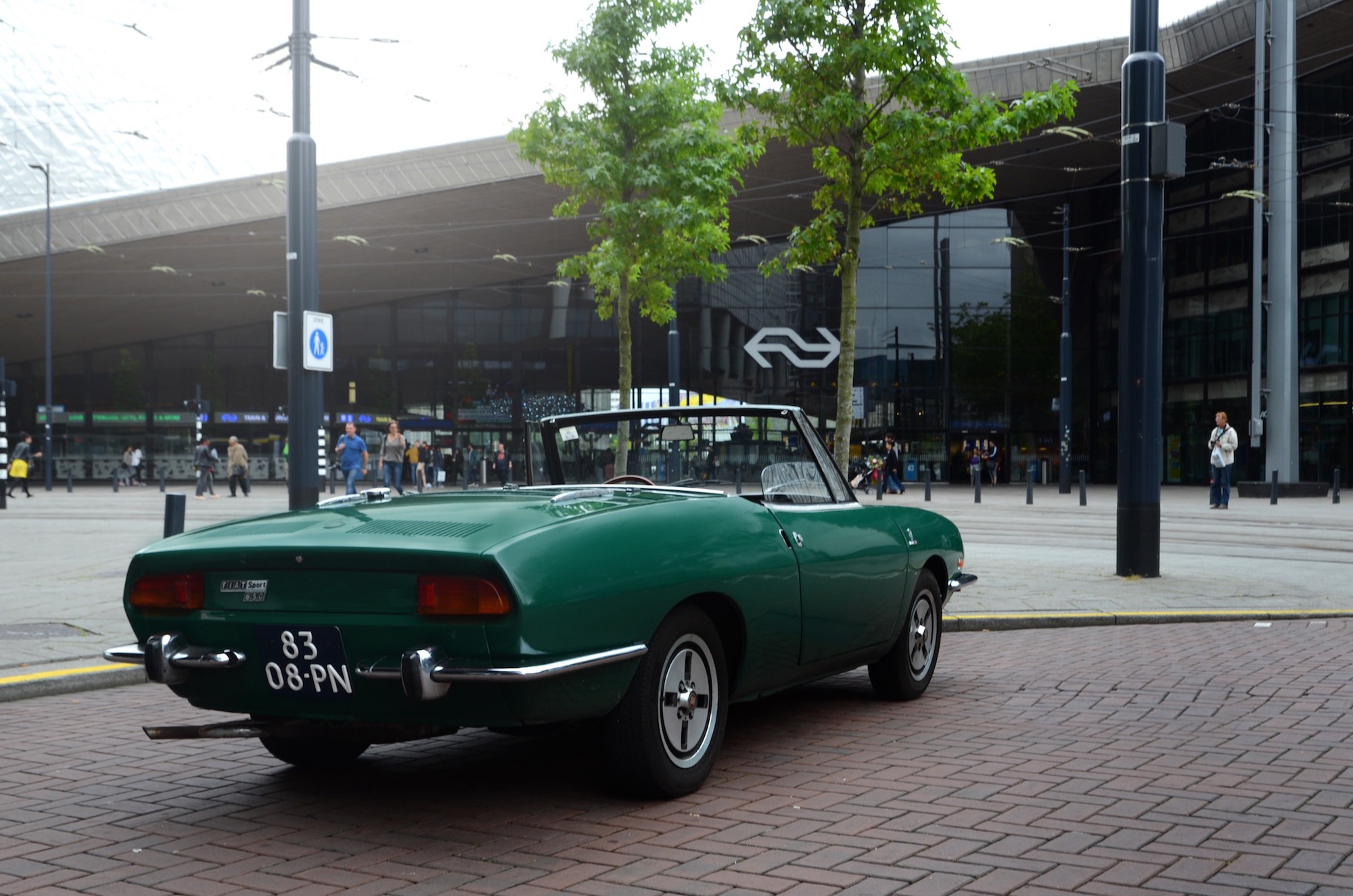 Front wheels have slight, yet visible positive camber to them – this is due to front suspension design, utilizing a single transversely mounted leaf spring, similar to the one found on Fiat 500, 600 and others. Tires are only 155 mm wide, but it is ok, considering the car weighs under 700 kgs. 13 inch wheels on this car in particular off an old Fiat Panda, yet they complement Bertone-made body well. Frank confessed that he had owned perhaps 10 Pandas of different generations, so the choice of wheels does not come as a surprise. 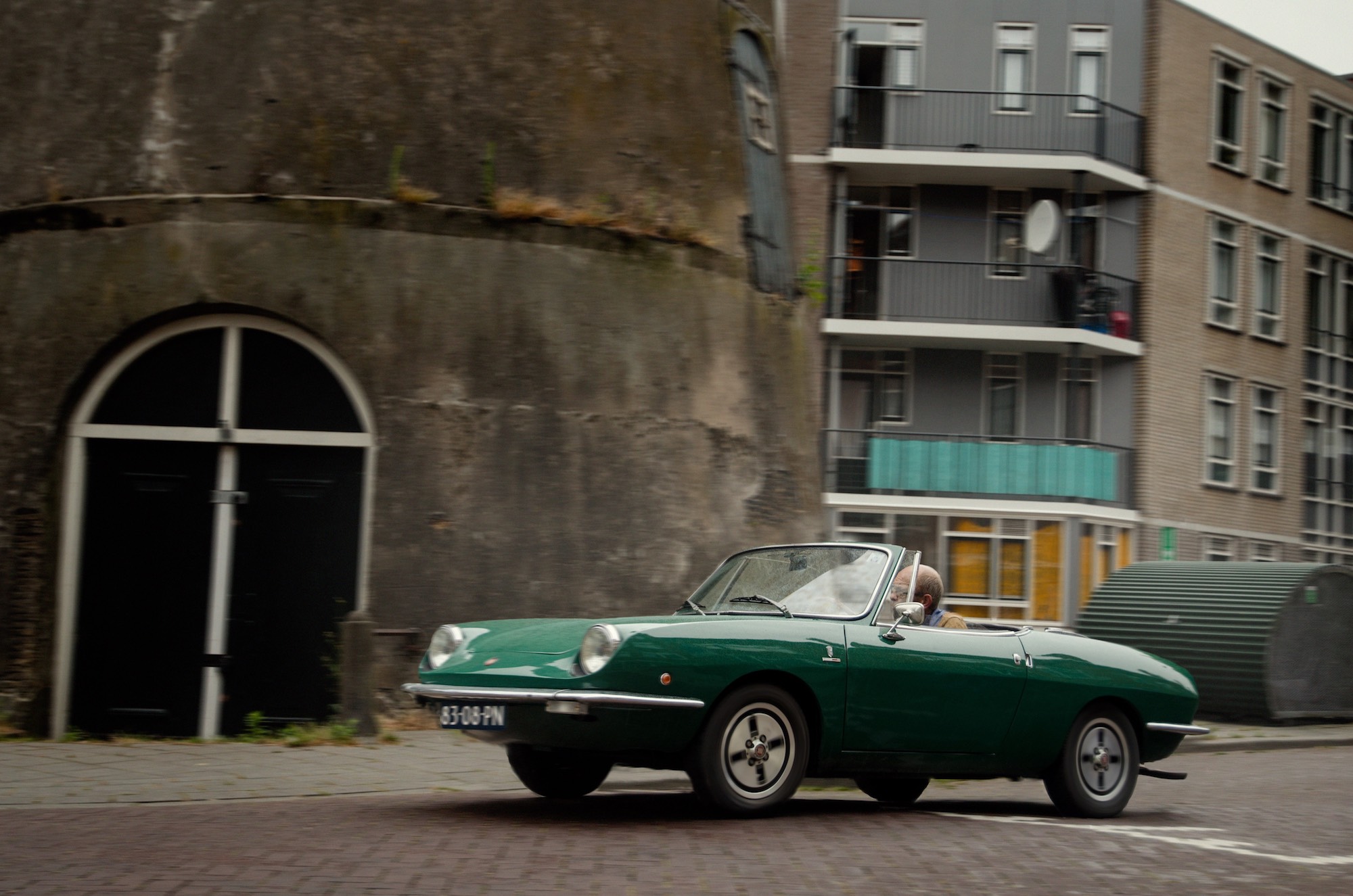 The car has a weirdly long front overhang, even though the engine is in the back
© Domantas Mizeikis

Joys and struggles of underdog ownership

Admittedly, 850 Spider was not the fastest Fiat roadster at the time of its production, and was often overshadowed by its bigger brother, 124 Spider, which debuted in 1966 (850 Spiders were produced from 1964). These days, smaller Spiders still remain to be underdogs. Initially, Frank wanted to get a 124 as well, but at the time it was beyond his budget, so he settled for this 850, which he’s owned for 28 years. This car, in particular, is taken out for joy drives quite often is definitely not a garage queen. During its lifetime, the car has undergone restoration twice. The owner mostly drives this Spider in sunny weather, which is not frequent in the Netherlands. In fact, the photoshoot for this article was interrupted by rain, resulting putting up the rag top and hiding camera gear in a rush. 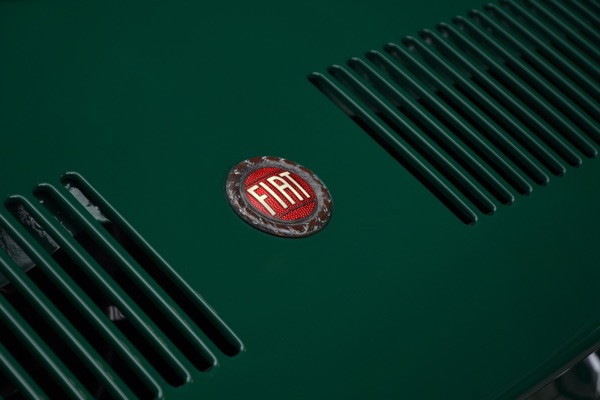 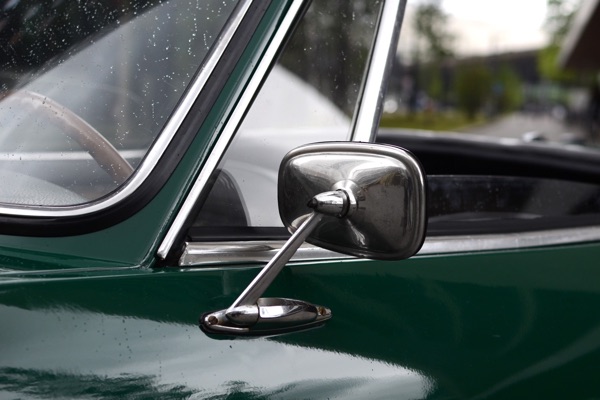 Originally, more than 120,000 of these Spiders were produced, most of which found their customers across the Atlantic, in USA. While it was quite successful for a sports car, these Spiders are relatively few and far apart these days, partially because they were less desirable than 124s and were not so well cared for. Whenever something goes wrong with his 850 Spider, it is challenging for Frank to find parts as there is no sufficient support and fan base these days, especially considering quite many bits and pieces from regular 850 do not fit the Spider. That being said, if you can find an 850 Spider in a good state, it should not set you back much more than EUR 10,000. That is not a bad price for an original way of experiencing la dolce vita, at least when the sun is out.