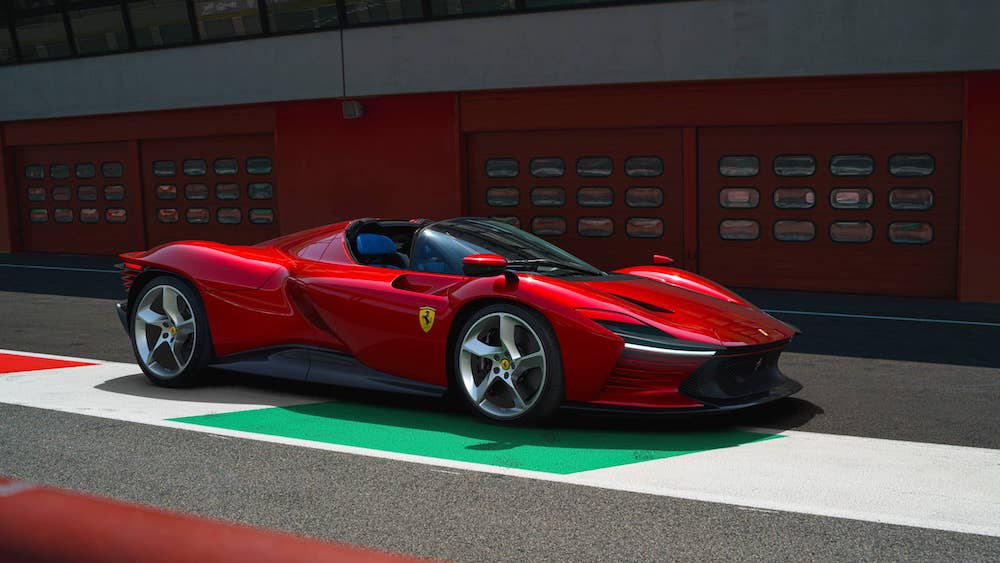 Around a week ago, Ferrari unveiled its Daytona SP3, an ultra-limited edition supercar that’s part of its Icona series - a group of very exclusive cars aimed at some of Maranello’s most exclusive (see, wealthy) clients.

The SP3 launched at Italy’s Mugello Circuit, a fearsome, undulating rollercoaster of a track located the heart of Tuscany, and an apt location given that the SP3 was made to celebrate one of Ferrari’s greatest motorsport successes; its 1-2-3 finish at the 1967 24 Hours of Le Mans.

Powered by the 829bhp, 6.5-litre V12 found in the Ferrari 812 Competizione, the SP3 brings together new-world Ferrari tech and reliability, with old school design tropes such as curvaceous contours, a wraparound windscreen, taken from Ferrari’s Le Mans racers of the Swinging Sixties. In short, it’s a very lovely, very ‘heritage’ thing. 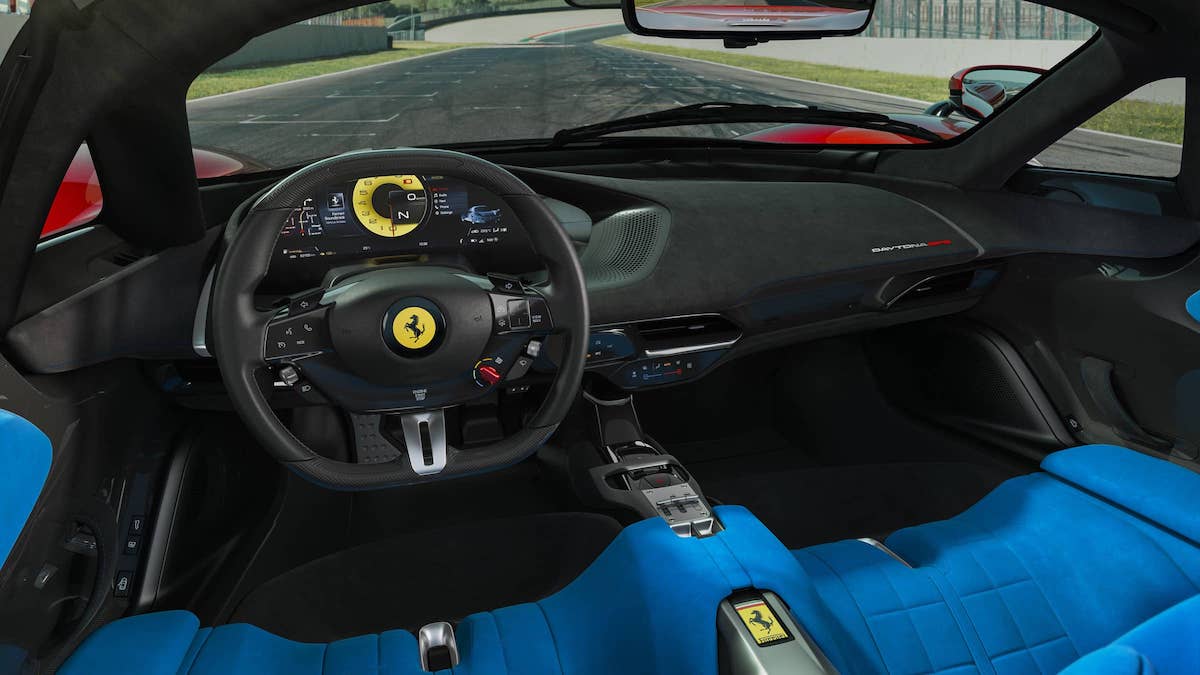 But at Dyler, we’re a broad church. Cars we enjoy do not necessarily have to be the likes of a Ferrari, a Porsche, or a Lamborghini. They just have to be interesting, and that’s why this list of limited edition and concept cars includes everything from this Ferrari SP3 Daytona and the Vall-aluminium Audi Avus, to the blood-powered Škoda Ferat, and the hugely intelligent Lancia Orca which we’re hoping makes a return in 2024... 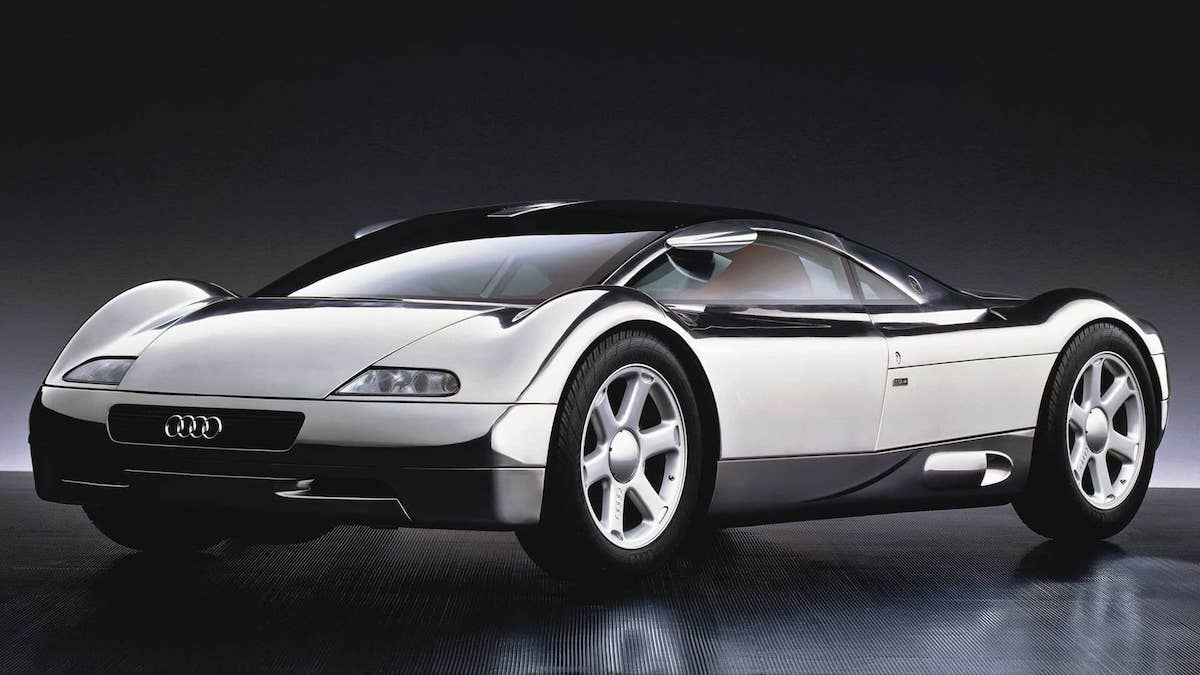 Believe it or not, the Audi Avus is 30 years old - it was also the car that signalled the company’s use of aluminium car constructio
© Audi Media Centre

When the Audi Avus launched at the 1991 Tokyo Motor Show, the sound of jaws dropping could be heard all over the world. You see, whilst the Quattro had been around for almost a decade by the time the covers came off Audi’s concept supercar, the German carmaker was still synonymous with fast-yet-functional cars. The rear-engined Avus, with its burnished aluminium body, and its 6.0-litre, W12 motor was a signal of clear intent from Audi that for the 1990s and beyond, it intended to combine sexiness with its now-trademark innovation. The aluminium space frame would herald the start of a ‘thing’ for Audi, and Ingolstadt would go on to use this ultra lightweight metal construction on pretty much all of its cars in the future. What’s more, the W12 motor powering the Avus is still used in the Audi A8 flagship today. The biggest difference between the engine now and the engine from 30 years ago, was that the engine in the Avus isn’t actually real… the 1991 W12 wasn’t ready in time for Tokyo 1991, so Audi engineers put together a lookalike unit fashioned from wood and plastic. That’s the one you still see under the Avus’ glass engine cover, so even if you wanted to have a go, you couldn’t. That said, Audi does still make the R8 V10, which is this car’s great-great grandson. Go on. You know you want to. 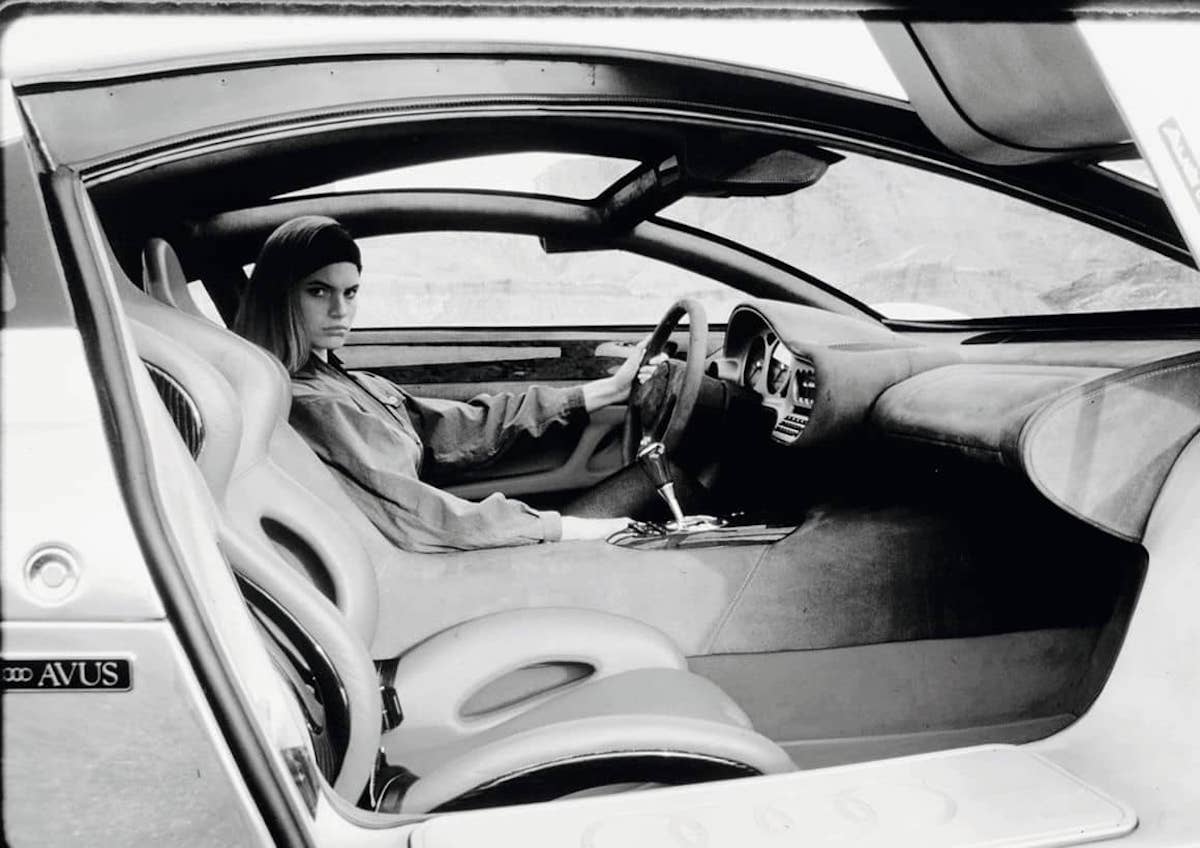 Look closely, and you’ll see that the Avus also boasts plenty of trad ‘90s wood and leather - bring it back!
© Audi Media Centre 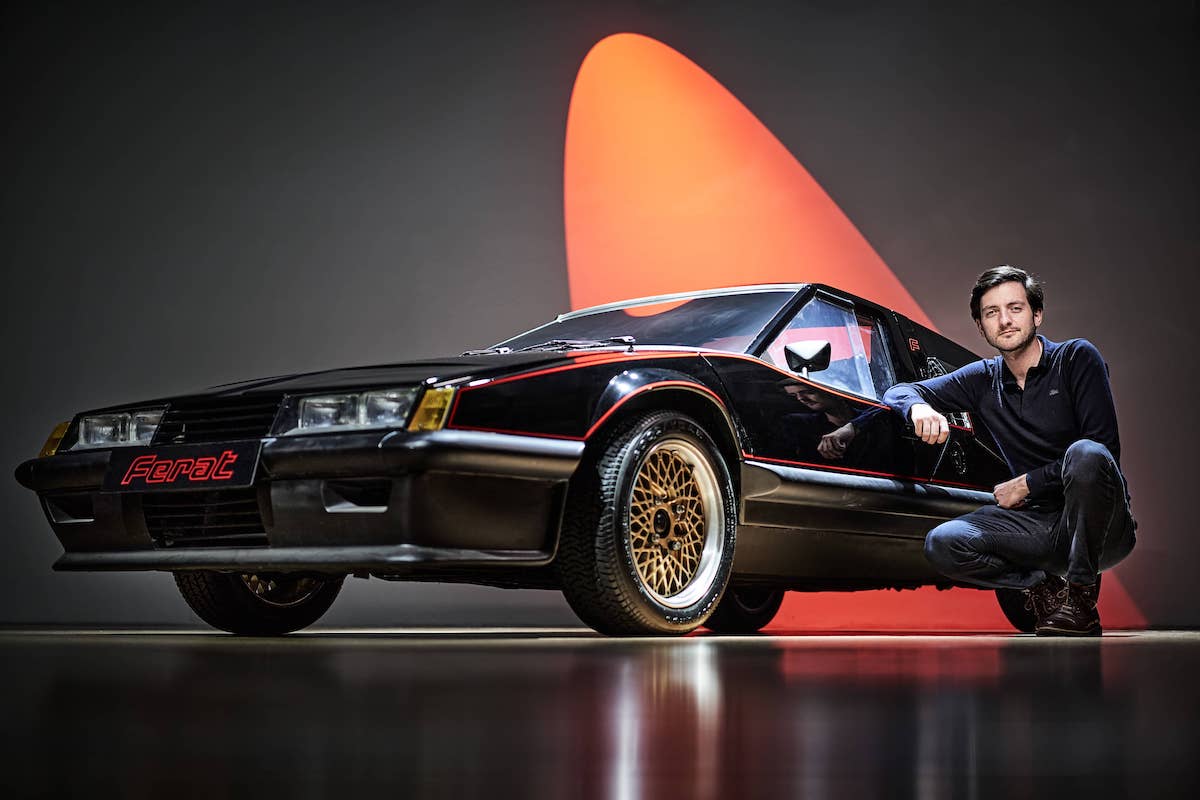 Based on the daring Škoda 110 Super Sport, the Ferat was the star of the 1982 Czechoslovak horror flick, Upír z Feratu
© Škoda Storyboard

The Škoda 110 Super Sport was always a strange car from the off, so it’s no surprise that what it became - the Ferat you see above - ran on human blood. Sort of. Then-Czechoslovakia’s Škoda unveiled its one-off 110 Super Sport at the 1972 Brussels Motor Show to show the world that - were it allowed - it could make a sports car as good as anything from the West. Powered by a rear-mid 1.1-litre engine taken from a Škoda rally car, the 900kg 110 Super Sport was capable of a very respectable top speed of 130mph. Škoda also eschewed doors in favour of a front canopy that lifted forwards to let the driver and passenger in and out. It also had 16 circular rear brake lights, and a further six circular headlights, so it looked a bit, erm.. spidery. A decade later, the 110 Super Sport was rescued from the Škoda factory in Mladà Boleslav to star in the 1982 Czechoslovak horror movie, Upír z Feratu or The Ferat Vampire. The once arachnid-like 110 Super Sport was repainted with a menacing black and red colour scheme - the original car was white - and the pop-up headlights were replaced with a fixed rectangular set up to give the car a sleek, menacing look. Now renamed the Ferat, the Sporty Škoda also boasted 15-inch gold BBS wheels, and a big ol’ rear spoiler because well, 1982. The end result was a sports coupé that looked like the Lancia 037’s harder, pissed off, Slavic brother. Oh, yeah - the Ferat was also powered by blood drained through the driver’s feet. If anyone reading - from Škoda or otherwise! - knows how this knows how this gruesome fuel system worked, please get in touch. It’s not as if we’re dying to find out... 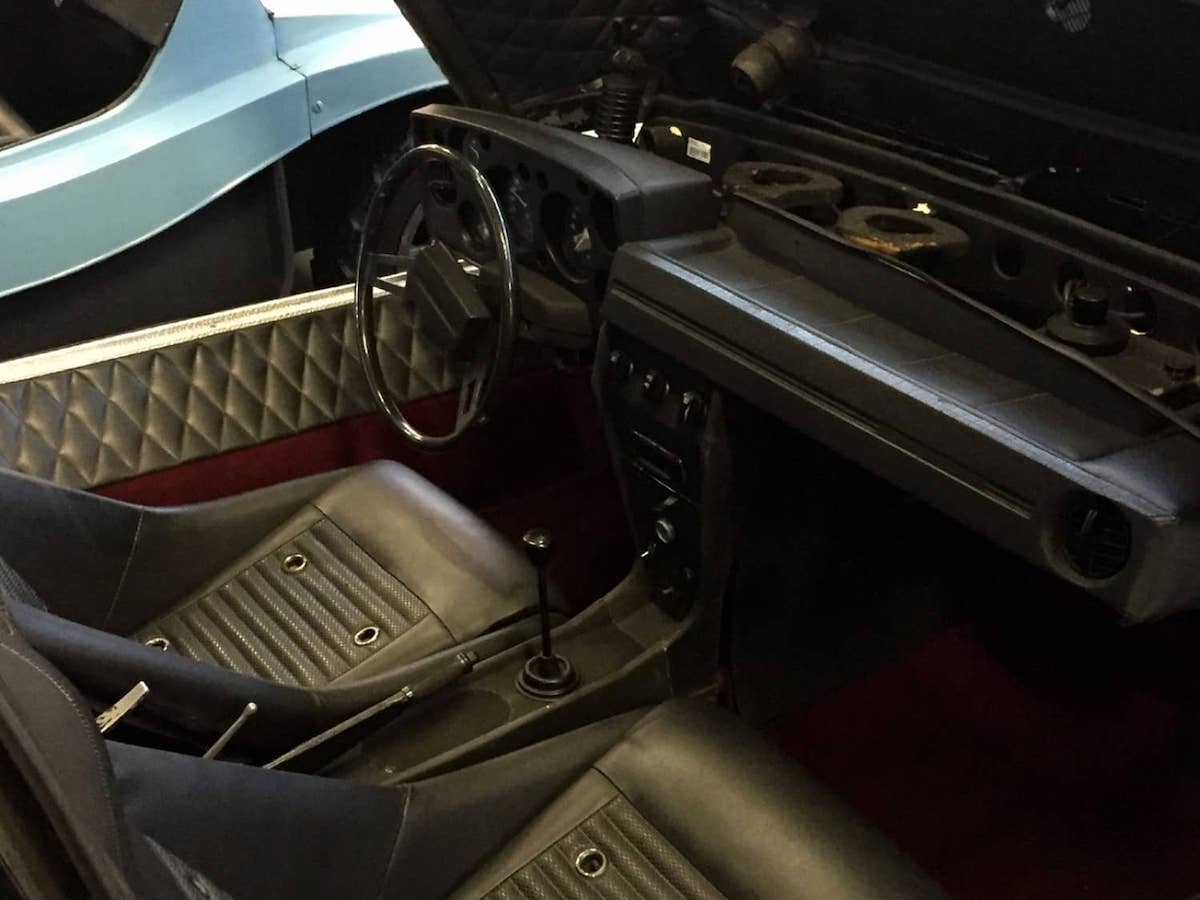 Mind your feet in the Ferat, it’ll suck your blood out
© Eurekar 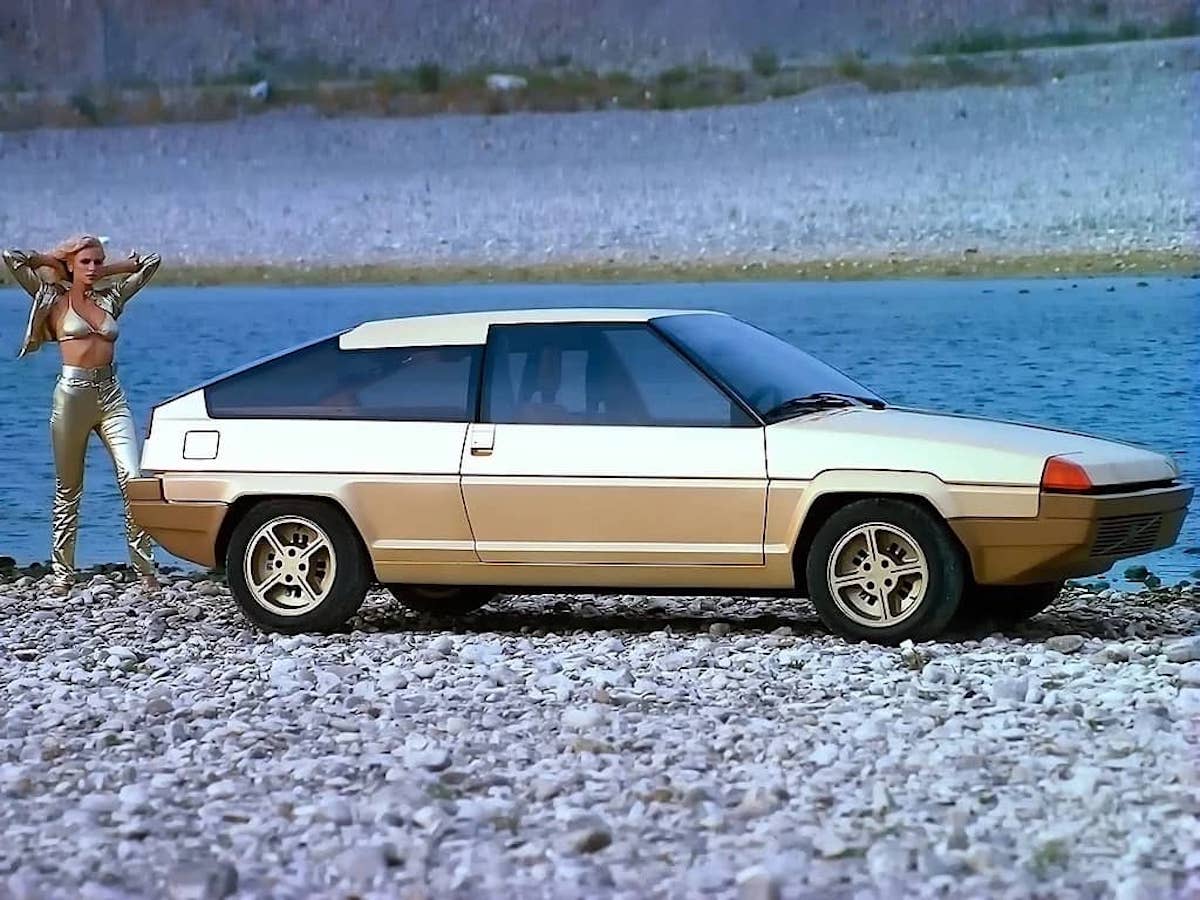 The Citroën BX started life as the Volvo Tundra
© Reddit

“Hang on a moment,” we hear you say. “That looks like a Citroën BX”... and you’re right, yes, yes it does. But the wedgy Citroën actually started out life as a Bertone design for Volvo, when the Swedes decided it wanted to replace its 343 car with something a little more exciting for the 1980s. The result from Marcello Gandini’s pencil was this, the racy 1979 Volvo Tundra, with its offset grille, angular profile, and pop-up headlamps - not your usual fare from Gothenburg at the time or ever, right? Inside the Tundra was most un-Volvo like too, thanks to its digital dashboard (because the ‘70s), wrap-around glass, and a ‘floating’ roof. All of this would be considered avant-garde today, so it’s no surprise that Volvo, who then traded off of their reputation of building solid if not spectacular family cars, told Bertone “yes, that’s all very nice but it’s not really our thing.” Following the Swedish rejection, Tundra design was then sold off to Citroën - possibly one of the most daring car manufacturers of the ‘70s and ‘80s - who turned it into the BX. Despite ultimately being turned over to Citroën, the Tundra’s influence had some influence from The People at Volvo - during the next decade, its design clearly had some sway over the Volvo 480 of the mid-80s. What’s more, the Tundra wasn’t even the last Bertone Volvo - the Italian design house also penned the rather lovely Volvo 780 whose production ran from 1986 to the early ‘90s. 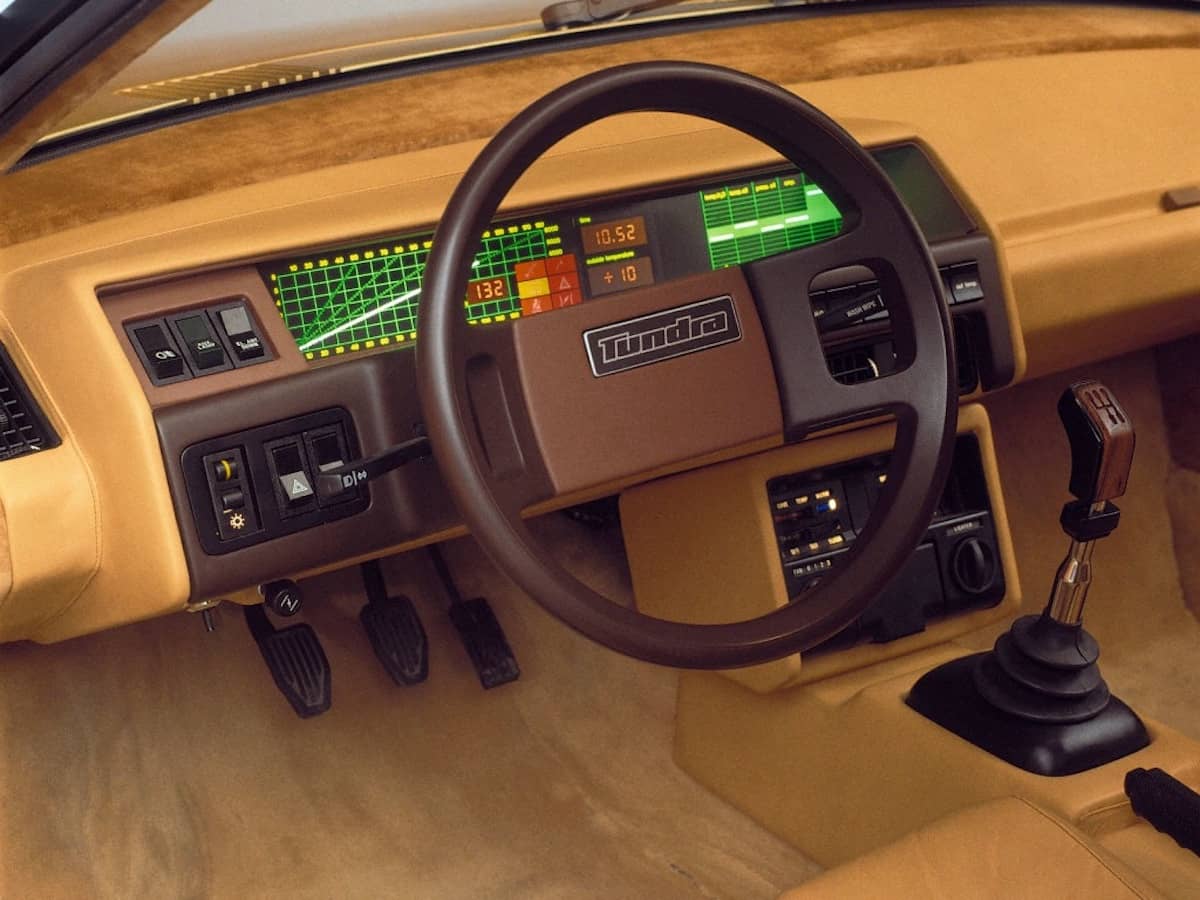 Digital dashboards were a thing in the ‘70s, and like ABBA, they’re a thing once again now
© Reddit 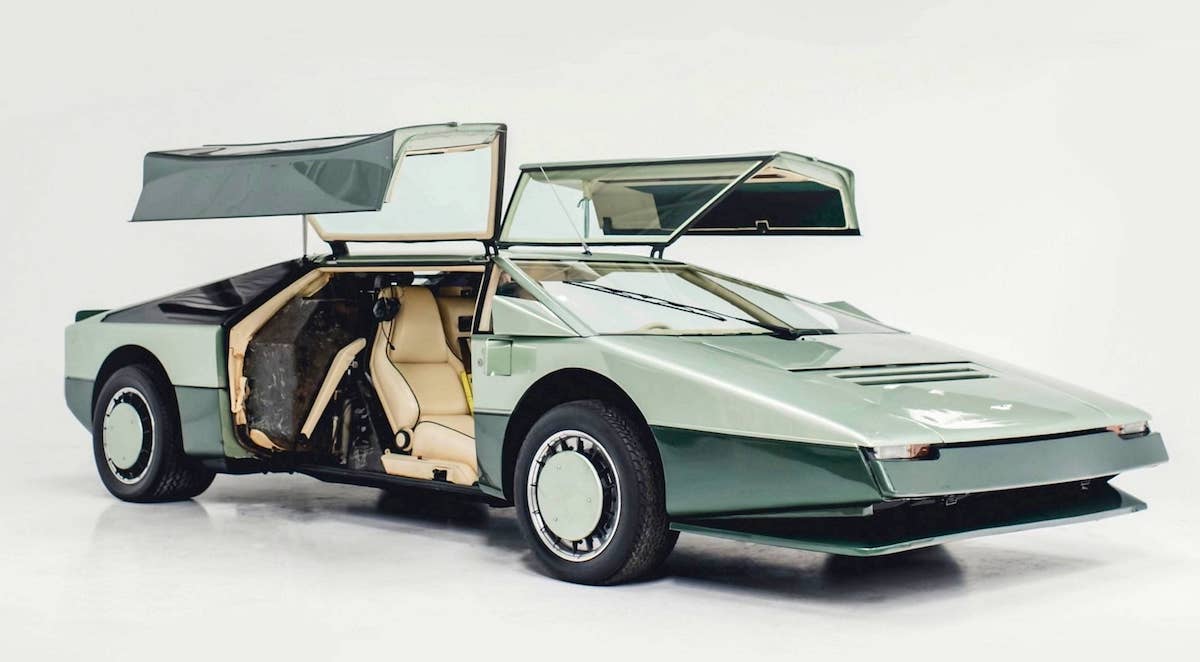 Fast, wedgy, and futuristic, the Aston Martin Bulldog was supposed to be the first British hypercar of the 1980s
© Reddit

An unintended one-off by Aston Martin to show the supercar world that it could compete with the likes of Ferrari and Porsche, the 1979 Bulldog was the British sportscar maker’s flex in wedge design, high-tech, and massive power. Designed to showcase the technological might of its newly-built Newport Pagnell facility, Aston Martin immediately gunned for the accolade of the world’s fastest car by claiming that the Bulldog’s twin-turbocharged, 700bhp V8 would propel it to a whopping 237mph. Alongside its gullwing doors and semi-digital interior lifted from its then-flagship Lagonda, the Bulldog had five hidden headlamps up front, which gave it a sort of… insect-like appearance. Unfortunately, the Bulldog proved to be such an expensive project, that Aston Martin’s then-director, the wonderfully-named Victor Gauntlett, cancelled it after just one car. Arguably, its spirit still lives on today in the form of Aston Martin’s Valkyrie hypercar. 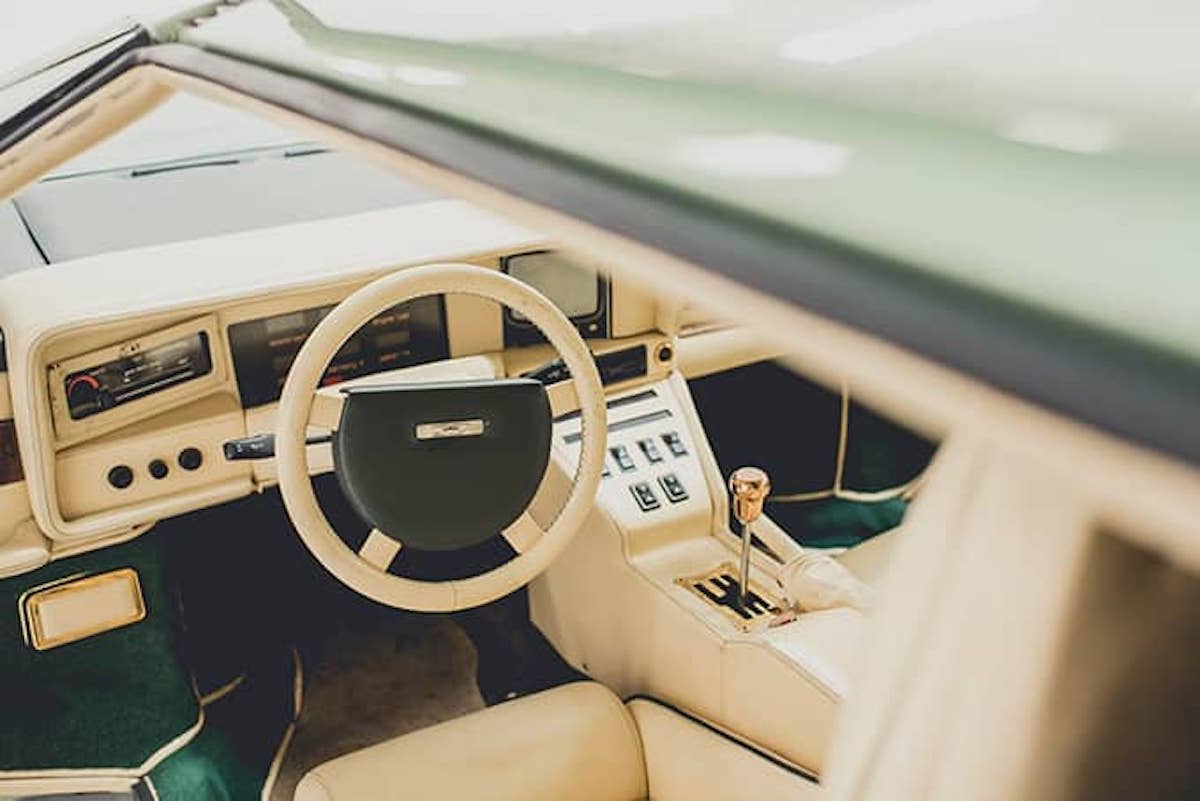 With its digital screens and swathes of leather, the Aston Martin Bulldog was both luxurious AND technologically advanced
© Reddit 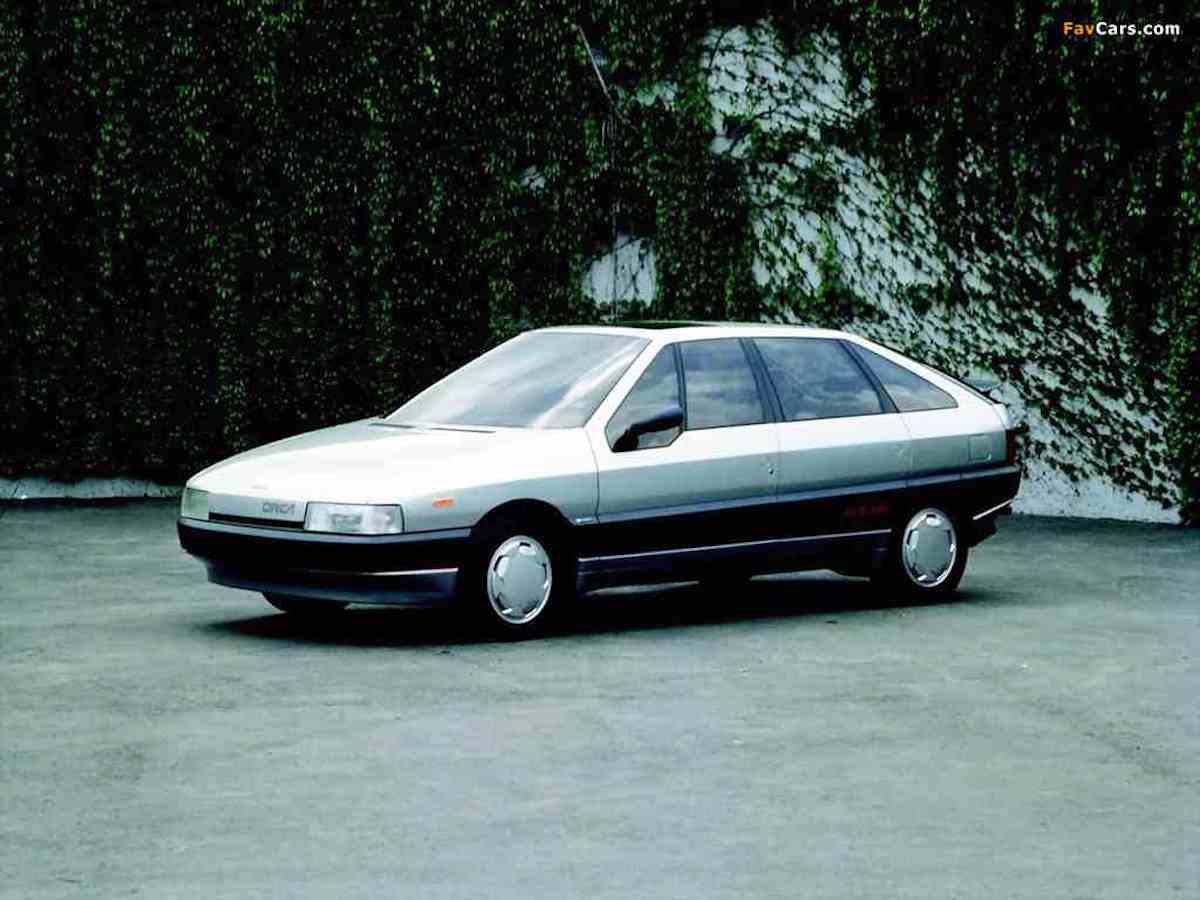 Named after a whale but nowhere near as aerodynamically efficient, the enormously clever Lancia Orca was one of Italy’s greatest ‘what ifs’ of the 1980s
© Polestar Press

The 1980s were a golden era for Lancia. The Turin-based car maker was hoovering up World Rally Championships, and it was also making interesting concept and production cars such as the one you see above - the 1982 Lancia Orca. Named after the Killer Whale, the Orca boasted one of the most adventurous interiors well… ever! It’s wheel-mounted controls used ultrasound pulses to activate everything from the HVAC, to the horn and the headlights. What’s more, the centrally-mounted steering wheel controls would remain fixed when the driver rotated it. This prevented him, her, or they from mistakenly pressing something whilst turning. Impressive ergonomics, right? The Orca was also underpinned by the four-wheel-drive system from the Lancia Delta, and what’s more, both cars were powered by Lancia’s 1.6L turbocharged engine. Already a seriously impressive car, the ItalDesign-designed Orca also boasted a front-mounted light bar that illuminated under braking. Its purpose? To warn pedestrians that the car was slowing. Sadly, the Orca never made it to production. However… Lancia’s now-owner Stellantis recently promised that it would return the much-loved Italian car maker back to its brilliant best over the next three years. With that in mind, let’s hope that the mid-2020s will be when an all-new, full-EV version of the Orca makes a splash. 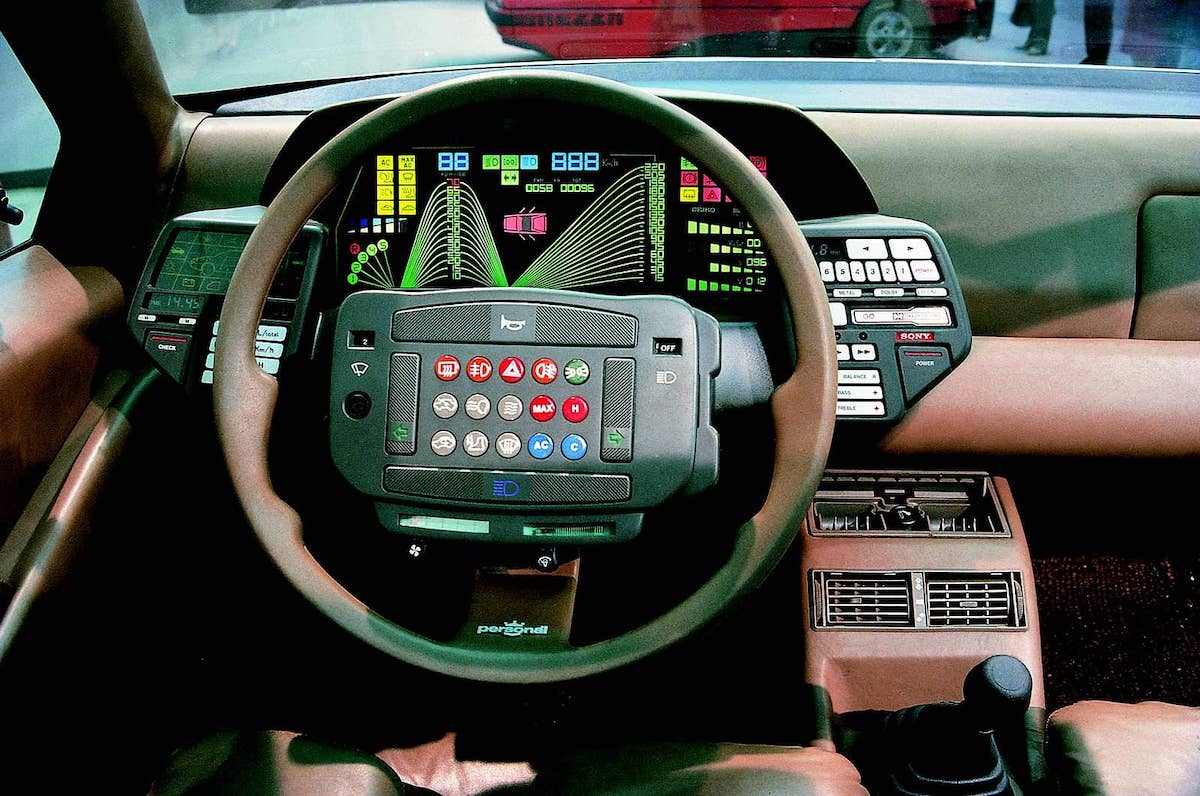 The Lancia Orca’s steering wheel-mounted controls were all underpinned by ultrasound pulses
© Carstyling.ru 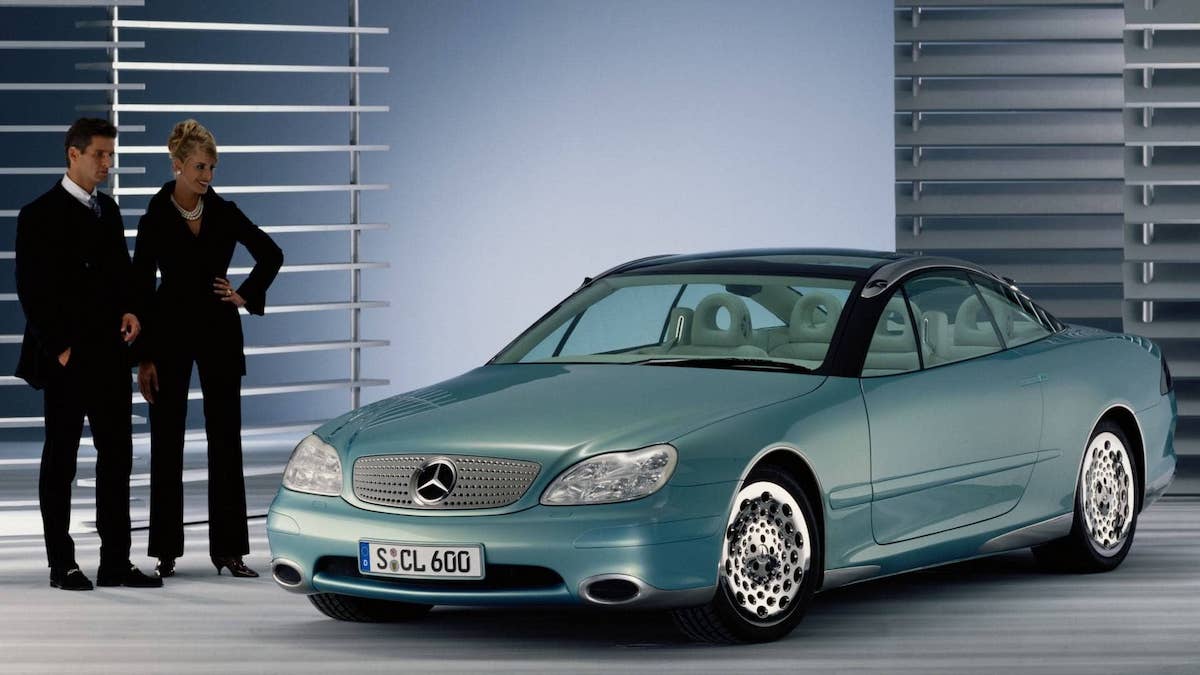 Clever, good looking, and way too advanced for its time, the F200 Imagination was Mercedes-Benz at its brilliant best
© Motor1.com

When it comes to being forward-thinking, there are few better car companies who do that better than Mercedes-Benz. The 1996 F200 Imagination here is a case in point. Alongside partially showcasing the design for the upcoming W220 S-Class and its C215 CL Coupé derivative, the F200 Imagination was all about Mercedes flexing its muscles as a technological powerhouse. Listing every single amazing piece of tech on this car would be another story unto itself, so for the sake of column inches, here are a few mind blowing features about this car - in place of the usual steering wheel and pedals configuration, it had drive-by-wire joysticks, which could be toggled between the driver. Its butterfly doors were given to the 2003 Mercedes-Benz SLR McLaren, and its electro-transparent glass roof featured on the 2002 Maybach 62. Perhaps most astonishing of all, was the F200’s Linguatronic voice recognition function - an early version of Siri, if you will. Even today, the F200 is one of Mercedes’ most astonishing feats of technology and design. 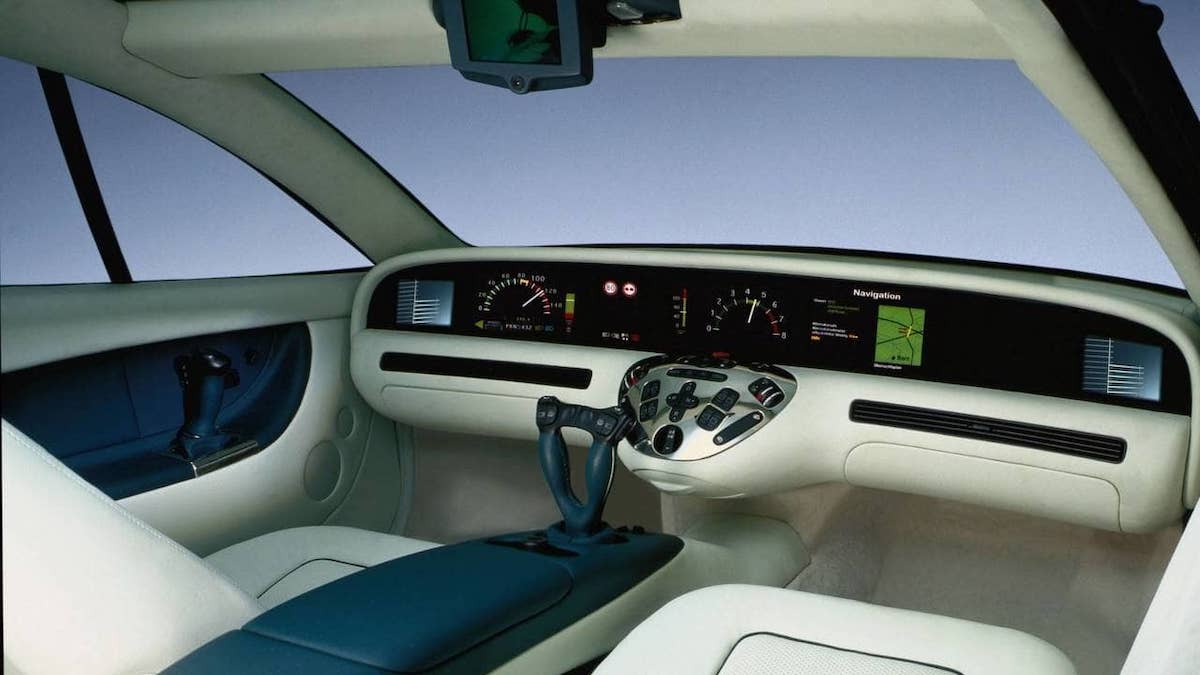 Yes, that’s right - the F200 Imagination was driven by joysticks that could be toggled for both driver and passenger
© Motor1.com

Whilst none of these exact cars are sold on Dyler, plenty of others made by the manufacturers mentioned in this story are. To browse our 1,000s of listings, please click here!