The Curious Case of Studebaker

Studebaker is one of the most important American automakers that have been pushed to the margins of history. Most of the youth these days hardly know anything about the marque, which is a shame, as Studebaker had quite a run for more than a century. Below is an attempt to compile the whole history of the defunct automaker, including ruthless competition, military contracts and controversial cars’ names.

The story of Studebaker motor company starts well before anyone was putting motors in cars at all. In 1852, a family of German descent started Studebaker Corporation in South Bend, Indiana. The company founders, five Studebaker brothers, came from a long lineage of wagon builders, so this venture was nothing new to them. The first big break for the corporation came in a form of a military contract – they were commissioned to build a fleet of wagons for the Union army in American Civil War. Military contracts would come to play a huge role in company’s success. This civil war income afforded the company to expand and become the largest vehicle house in the world in 1875.

Granted, if you are on Dyler, you are not especially interested in reading about horse wagons, so let us forward to the 20th century. Studebaker presented their very first motorized car, an electric one, in 1902, becoming the only carriage builder in the US to successfully transition to automobile business. Two years later, they presented a gasoline propelled car, while still producing electric cars until 1911. For their petrol powered cars, Studebaker cooperated with Garford and E-M-F, yet none of these partnerships were great for the company. E-M-F could not ensure sufficient build quality while Garford did not follow the partnership agreement. 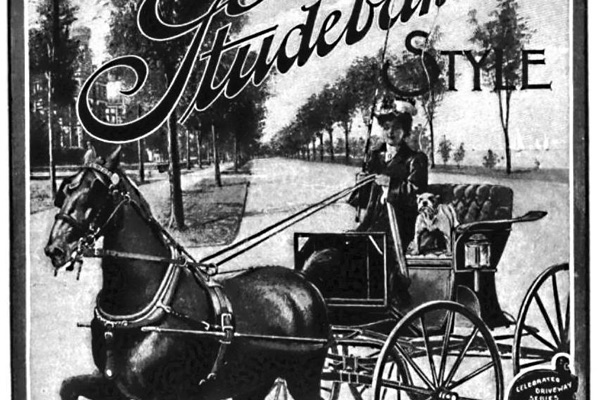 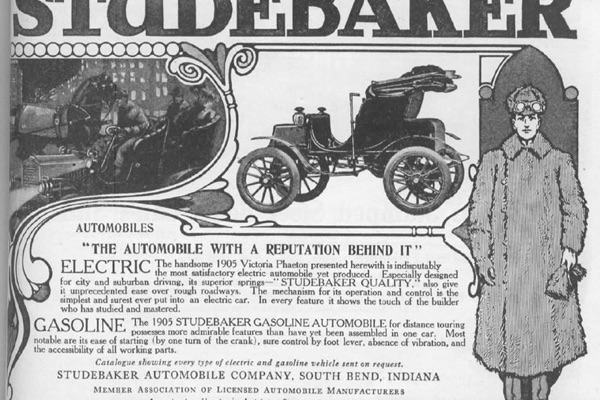 For a while, Studebaker made electric cars
© Public domain

Considering these flawed partnerships, it is not certain if Studebaker would have made it into the 1920s if it was not for another military contract. Fortunately for Studebaker, WWI broke out in Europe, and they were commissioned to build cars, ambulances, transport wagons and even horse saddles for the military forces of Britain, France and Russia. Ethically complicated but undoubtedly a lucrative gig. 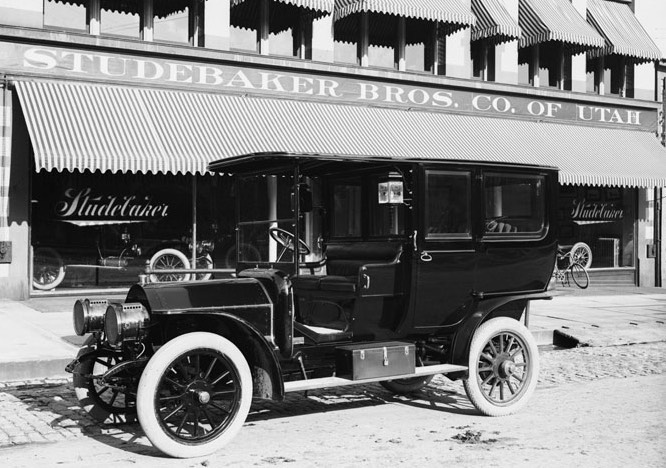 Soon after WWI, Studebaker dropped their horse-drawn vehicle operations and introduced a line of trucks and busses to fill this gap. For the following decade or so, Studebaker experienced a rapid growth, expanding both in the US and Europe. This expansion to a large part relied on offering a sub-$1,000 Erskine economy car, named after Studebaker’s president at the time.

Another inter-war Studebaker, the Dictator, is quite remarkable too. Not because it was a bestseller but because retrospectively it was quite a marketing blunder. This entry-level car was named this way since it supposedly “dictated the standard”. Unfortunately, in European monarchies the word “dictator” carried different connotations, thus Studebaker had to rename the car as Director there. With Hitler’s rise to power, Studebaker decided to ditch the controversial Dictator name altogether and named the car Commander in all markets.

This problematic name was not much of a hurdle for Studebaker. The manufacturer was flourishing in the 1920s and the management was truly riding the gravy train. In 1929, the vast majority of Studebaker’s earnings were paid as dividends to the shareholders and not invested in the company. This practice proved fatal for the automaker when the 1930s Great Depression hit. Albert R. Erskine decided to invest heavily into their upcoming economy car Rocke, but hardly anyone was buying even the cheapest of cars. This has led to massive cutbacks and layoffs in the company. Erskine himself committed suicide in 1933, the year Studebaker went into receivership and was consequently restructured. In 1935, the company was fully restructured, refinanced and began designing new models.

“First by far, with a post-war car”

While war is terrible for people, it is often beneficial for the economy, at least in Studebaker’s case it definitely was. When WWII came around, they managed to score a contract to build some military trucks as well as M29 Weasel, a tracked transporter meant to tackle snow. In order to fulfill the all-important military responsibilities, the production of civilian cars was cut down to only one model, Champion. That was a small price to pay, as those government contracts gave Studebaker a head start immediately after the war. 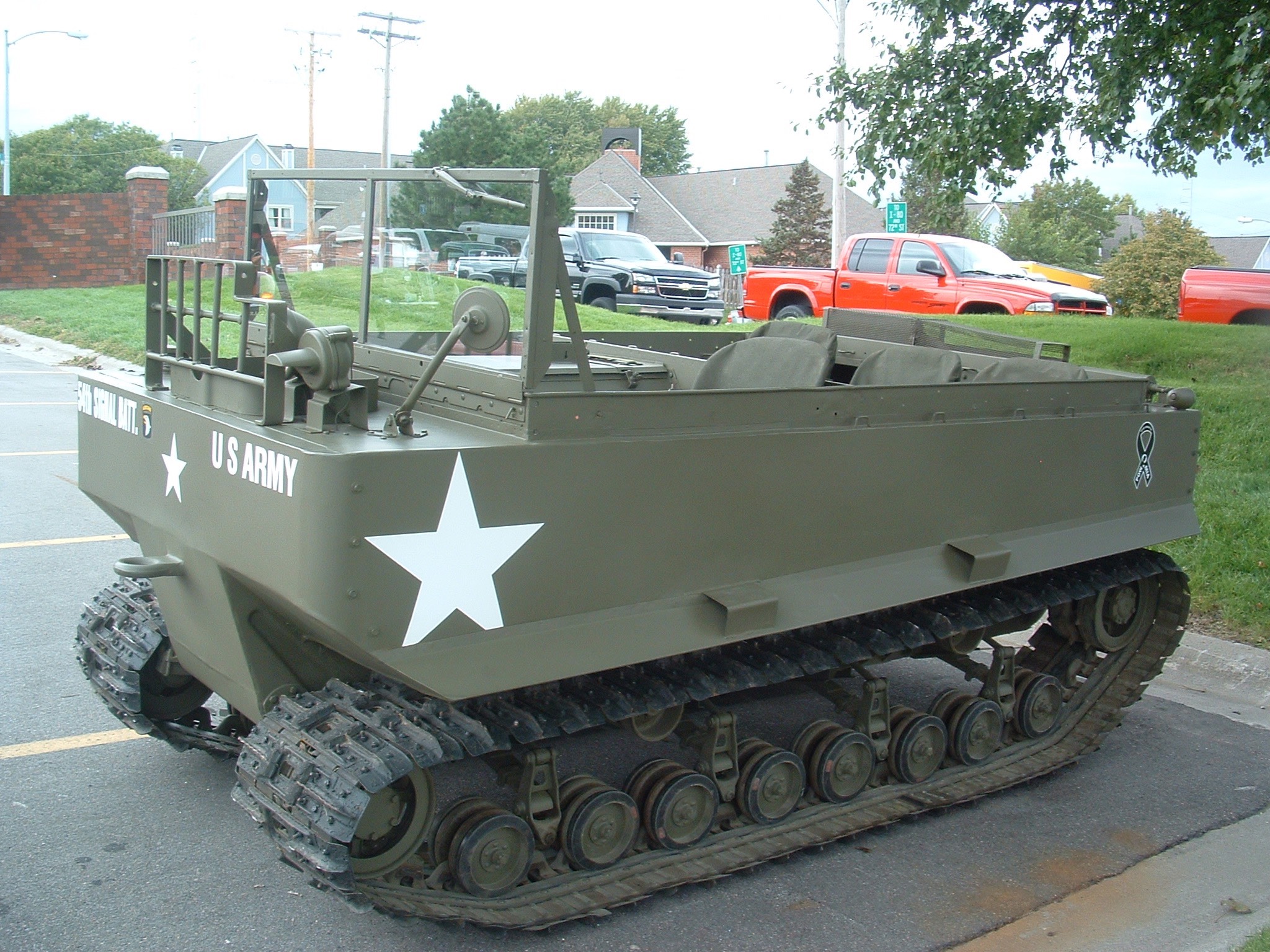 M29 Weasel was produced to operate in difficult terrain in WWII.
© Public domain

In 1947, Studebaker debuted a new line-up of their bestselling Champion model, with a bold slogan “First by far, with a post-war car”. The Starlight Coupe of the champion range was perhaps the most curious looking one. With a long trunk lid and a wrap-around rear window the car looked like it had two front ends. For a while, these cars got a distinctive ‘bullet nose’. Aside from looking very futuristic, it probably helped to tell which way the car is facing. 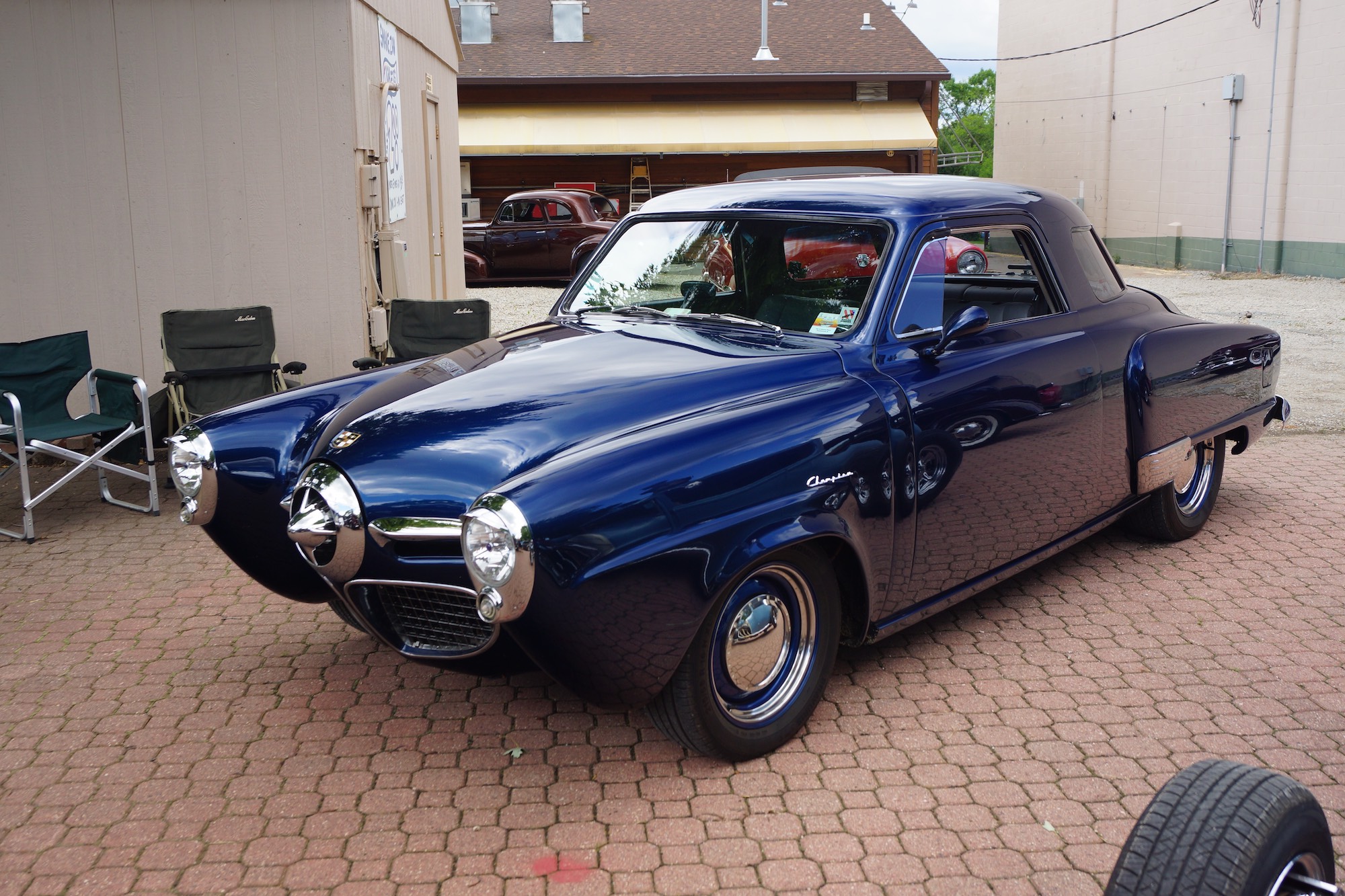 Although the appearance of the first Champion Starlight Coupe polarized opinions, the look of the second iteration was universally appreciated. Penned by Raymond Loewy studio, it is considered one of the best American designs to this day. It came in two guises: a cheaper Starlight, featuring a B pillar and a pillar-less Starliner. Low and sleek coupes are now compared to the finest European designs. Sadly, these stunning coupes did not bring Studebaker a fortune. Produced only for two years, 1953-54, they were plagued by mechanical issues ruining their reputation. What is more, the manufacturer was not expecting to sell that many of them, struggled to keep up with the demand and lost quite a few customers. 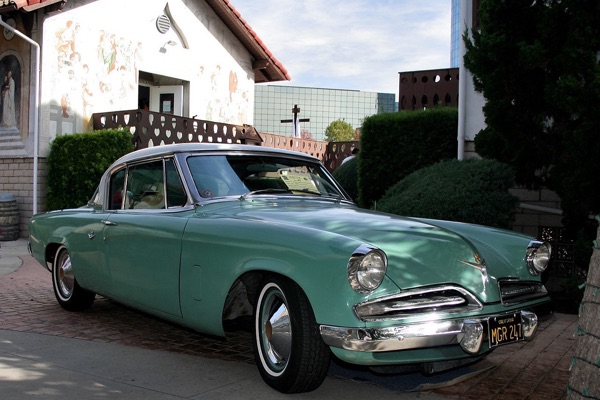 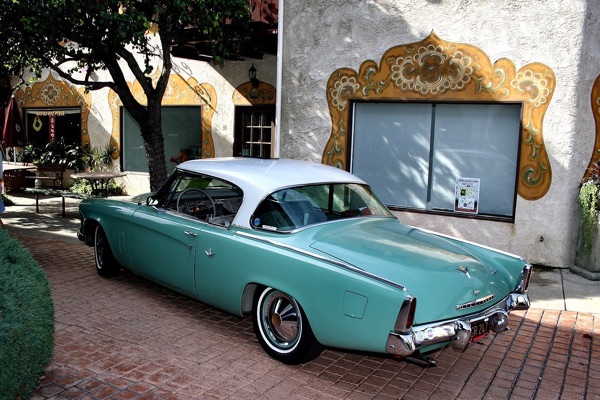 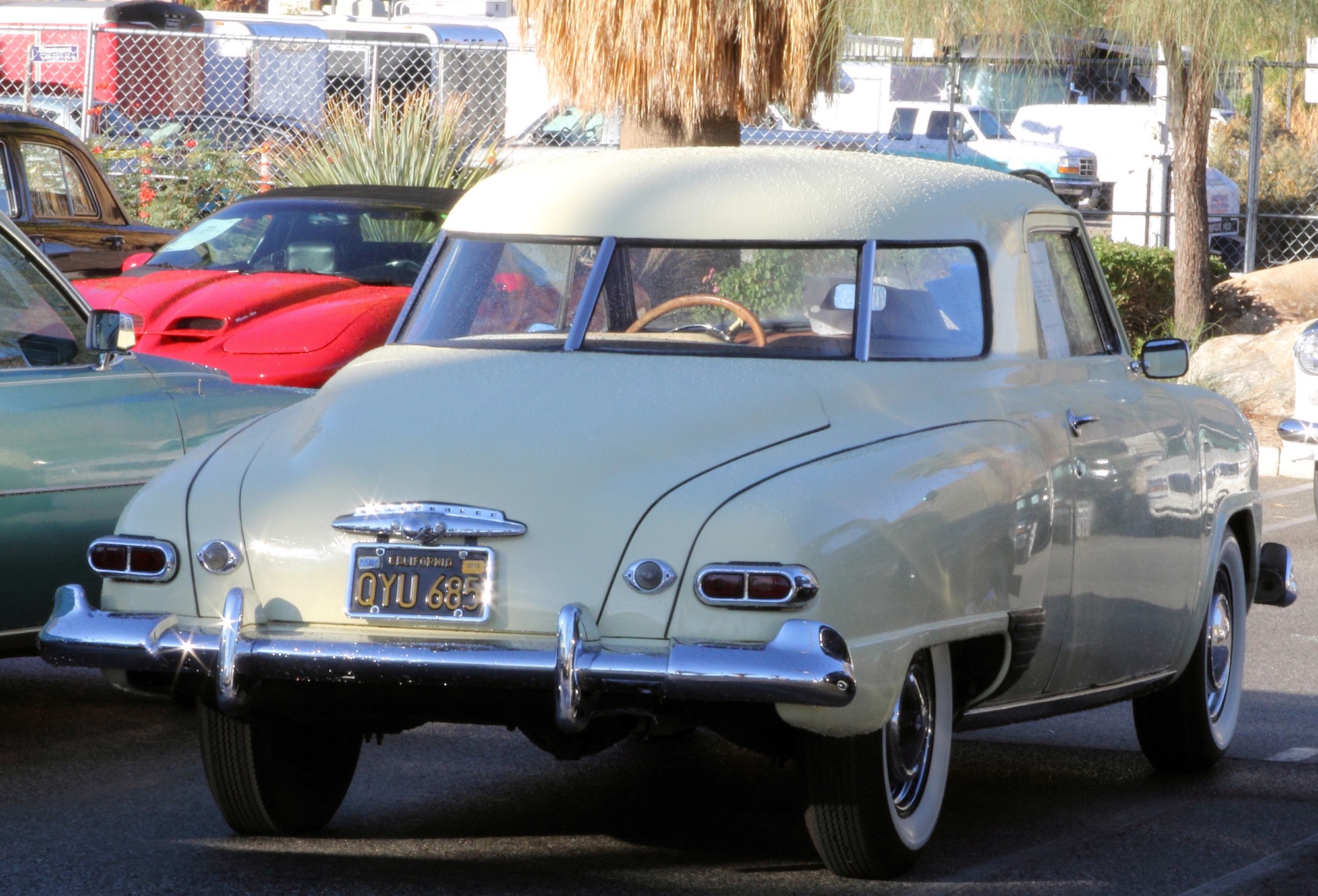 Having beautiful luxury coupes is all very nice, but the bread and butter in the automotive industry is earned by selling reasonable cars to regular people. Studebaker could not really do it in 1954 because of what its arch nemesis, Ford, decided to pull off.

Due the shortage of resources, the production of all cars was limited during the Korean War. When it ended in 1953, these limitations were lifted and Ford set out to steal the bestselling American manufacturer title from Chevrolet. Ford was determined to do so at any cost, even selling cars at a loss. And there were many cars to be sold, just in 1954 alone, the blue oval giant churned out 1.2 million automobiles. In the end, this aggressive production and marketing strategy made Ford the number 1 manufacturer in the US. While it did not leave much of a dent in Chevy’s budget, it severely hurt smaller manufacturers, including Studebaker which could not compete with such low prices. 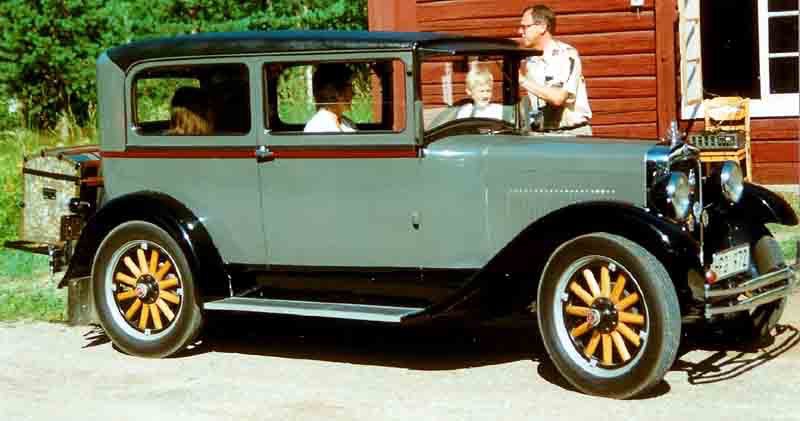 To combat the aggressive pricing policy of its bigger competitors, Studebaker came up with an ascetic version of its Champion. This economy car was named Scotsman (another politically incorrect model name) because Scots are stingy, obviously. The basic car would set one back $1,776, making it the cheapest American car in 1957-58 when it was produced. On the outside, it looked plain with very little chrome. On the inside, such luxuries as armrests and sun visors were extras. The car could still transport five full-sized adults, but they would have to make do without a radio or carpets during the journey. 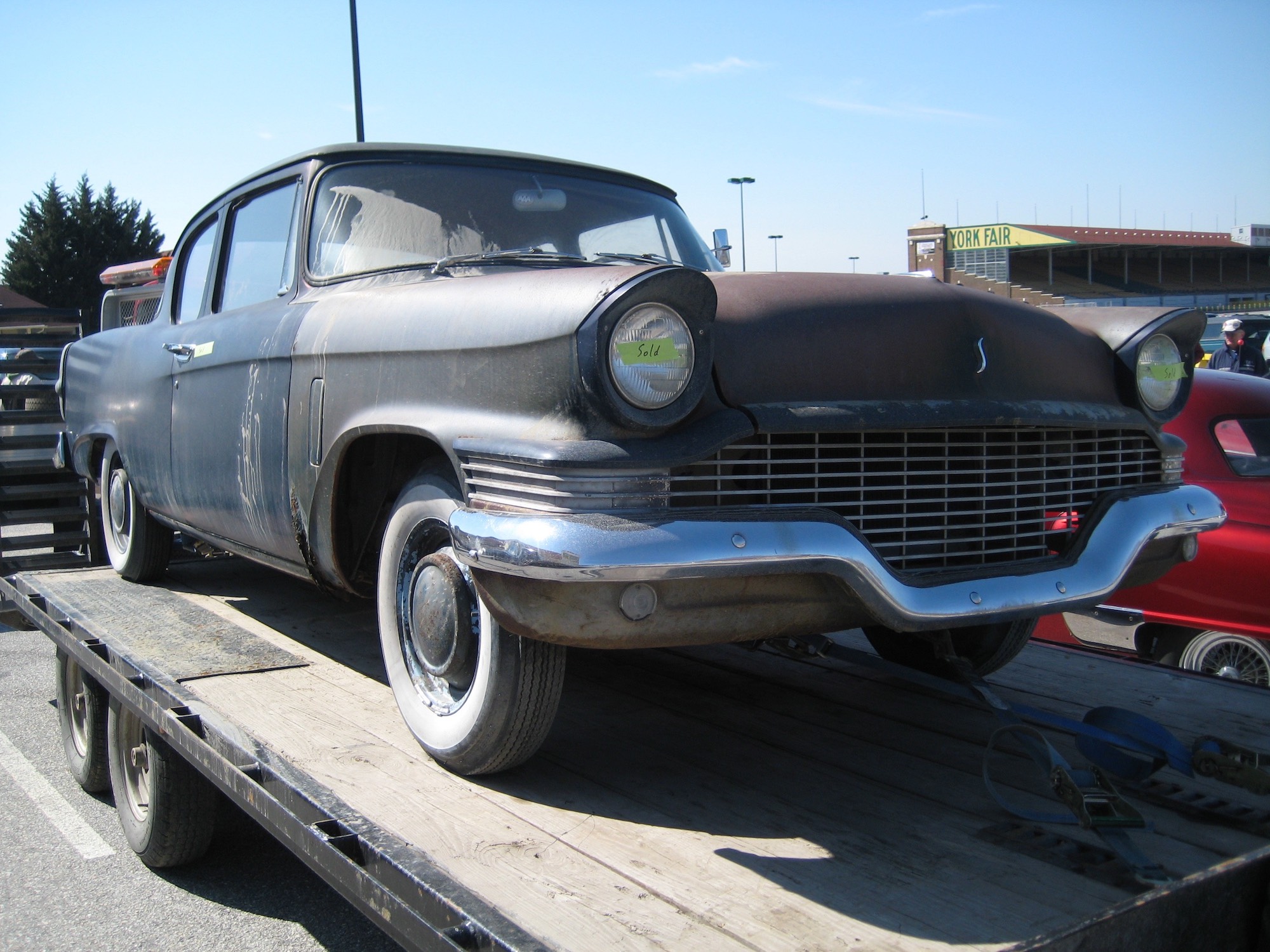 Scotsman was the most ascetic car on offer. It did originally come with paint, though
© John Lloyd, Flickr

Despite various bold marketing moves, when the 1960s came, the Studebaker did not have much money to R&D new models. As a result, their offerings in the 60s were mostly redesigned older cars. Despite this hardship, they did introduce one last remarkable car in 1962 – Avanti. 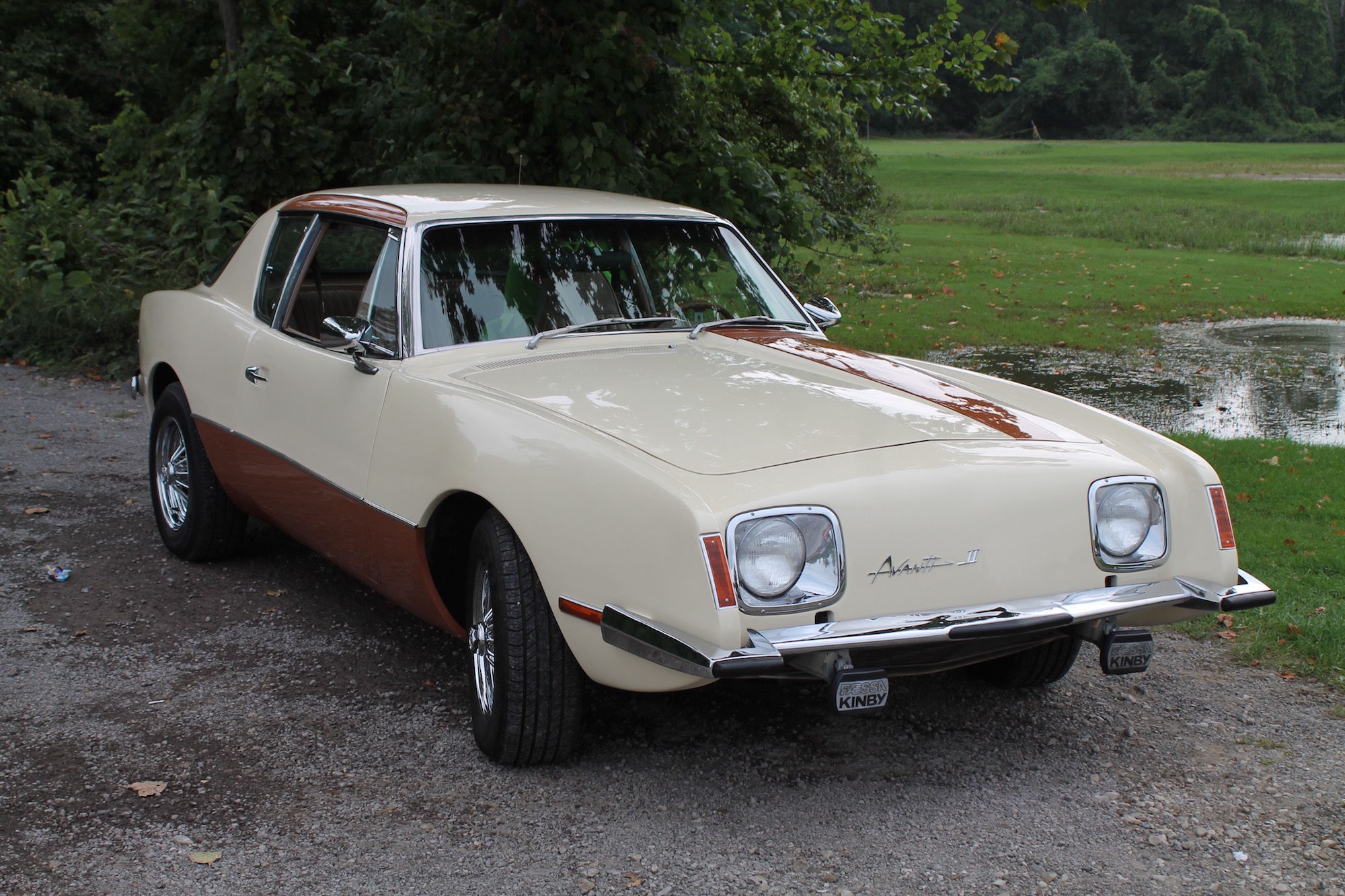 Avanti was the last car Studebaker released, quite a farewell
© priceman 141, Flickr

Avanti was mostly based on their existing Lark model but featured a rather extravagant grill-less front end. It was marketed as America’s only 4 passengers high performance vehicle. To deliver the promised performance, it utilized a 4.7 l V8 engine from their bigger model Hawk. The car even managed to break a Bonneville Salt Flat speed record in 1963, reaching 195.64 MPH (314.85 km/h).

Avanti’s body shape was quite complex and producing all panels in steel would have been too costly, so they were molded from fiberglass. Studebaker did not have the facilities for that, so the task was trusted to subcontractors. Half bankrupt Studebaker could not keep up with its responsibilities to both partners and customers, struggling to deliver Avanti’s orders.

On top of other struggles, the labor force at Studebaker was among the highest paid in the American automotive industry, as their union was very aggressive in negotiations. Smaller Studebaker could not rule with the iron fist like Ford, Chevy or Chrysler, making it a nicer place to work but leaving less profit margins for the manufacturer. To mend this issue, they signed a contract with Curtiss-Wright, an airplane maker which was supposed to overhaul the whole employment structure of the automaker. This collaboration was a failure, as Curtiss-Wright management had little experience in the automotive business and ended up ruining Studebaker completely.

Studebaker did not have the funds to cushion this fall, so it was forced to halt its operations. The factory in South Bend closed in 1963, and another plant in Ontario, Canada did so in 1966. Studebaker was among the biggest employers in both of these cities, resulting in spike in unemployment in both areas. The Studebaker Company officially seized to exist in 1967.

Many fans of the marque like to point out one or two reasons that led to company’s demise, some blatantly blaming the major manufacturers of Detroit. It seems there is no definitive explanation why this happened, but it is certain that the American automotive landscape became far less diverse from the day Studebaker closed its doors.