Four Miles per Minute in an MG

There is something that urges the Brits to go fast. Hardly any other nation on earth has as many land speed record holders as Great Britain. MG EX181 was one of the most elegant attempts, this sleek flying saucer whizzed through the Bonneville Salt Flats at whopping 245 mph (394 km/h) with not much more than Sir Stirling Moss and a 1.5 l engine on board.

By 1950s, it was a common practice to use airplane engines for land speed record attempts, reaching in excess of 600 km/h. Instead of going down that route and just slapping their logo on a wingless aircraft with wheels, MG decided to base their record car on their products and utilize their very own 1.5 liter 4-cylinder unit from MGA. That allowed them to compete in Class F (up to 1500cc). Of course, MG engineers set out to squeeze the absolute maximum from this tiny powerplant. With the help of a supercharger and a methanol-based race fuel, the unit produced just a bit south from 300 bhp, an admirable power for such engine. 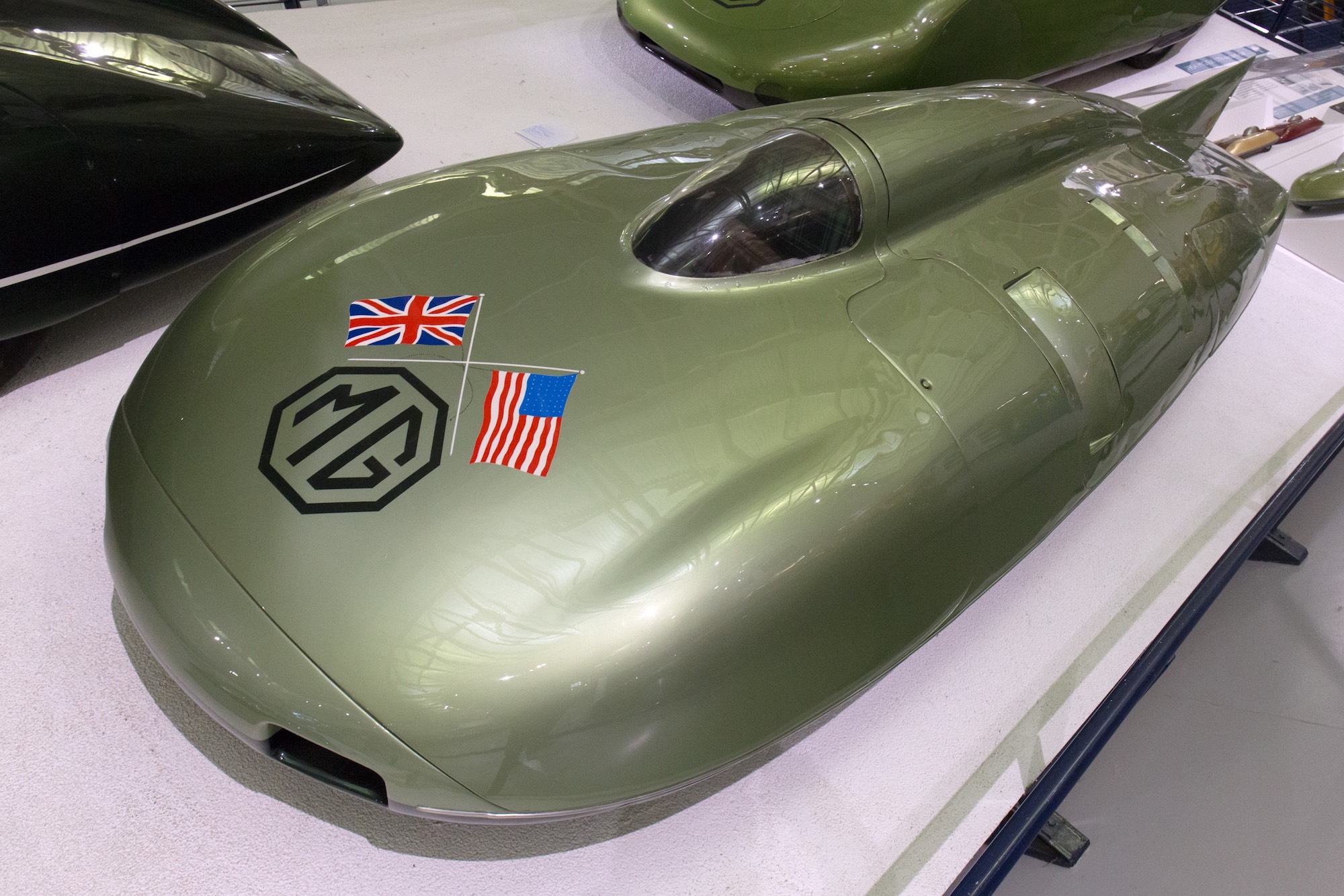 Enzo Ferrari famously said "Aerodynamics are for people who can't build engines". This logic certainly did not apply to the EX181. After pushing the most out of the engine, MG engineered the body to be as slippery as possible. Usually, the land speed record cars were designed around the chassis which was then wrapped in an aerodynamic shell. This time round, the body was designed from a clean slate and all of the components had to comply with the harsh mistress of aerodynamics from the beginning. And that included Stirling Moss himself – the legendary racer was given just enough room inside the cabin, sitting in a recumbent position just inches away from the car’s nose. All in hopes to minimize wind resistance. Think of the EX181 as a motorized skinsuit for Stirling Moss then. Even though the man is not that tall, he was probably the biggest component of the vehicle. This old timey video shows how the EX181 came together:

As much as the Brits enjoy breaking speed records, they don’t really have a place suitable for the purpose. The MG EX181 was taken apart and taken across the Atlantic to race in the world famous Bonneville Salt Flats. 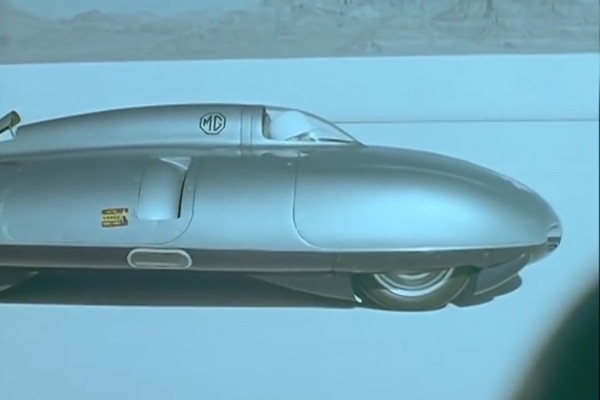 The goal was for the EX181 to cover at least 4 miles per minute
© Screengrab from British Pathe, Youtube 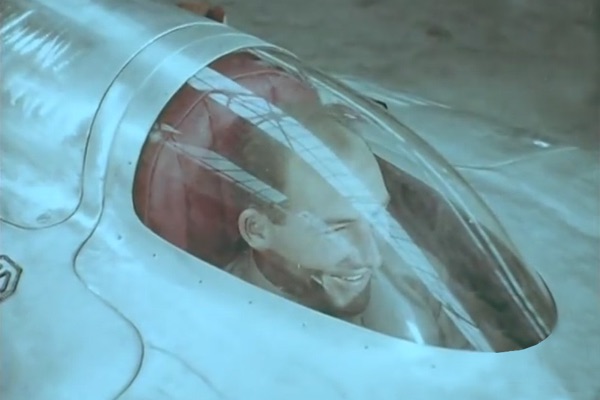 The car was tightly shaped around Stirling Moss
© Screengrab from British Pathe, Youtube

As you can see in the video, there was not much in terms of crash safety in the slippery racecar. Although there were not many obstacles to crash into in the deserted lake bed, there was only a thin layer of aluminum and a laughable crash helmet to save one of the greatest race drivers from a 320+ km/h impact. To make matters worse, toxic methanol fumes came into the cabin every time the driver went off the throttle, an issue that only surfaced during testing in Salt Flats. If that record attempt happened today, such safety hazards would stop the record runs before they even started. Of course, it was the 50s, so Stirling Moss probably just smoked a pack of cigarettes and set off. 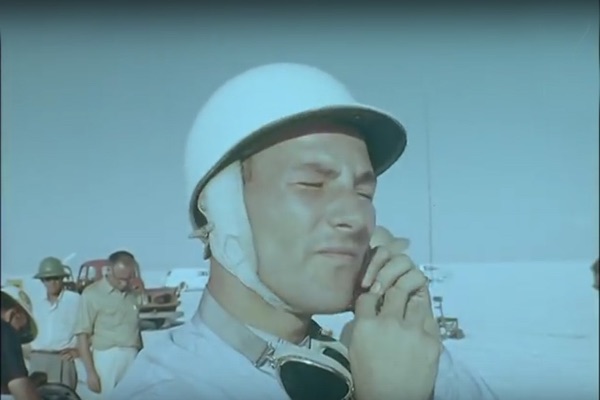 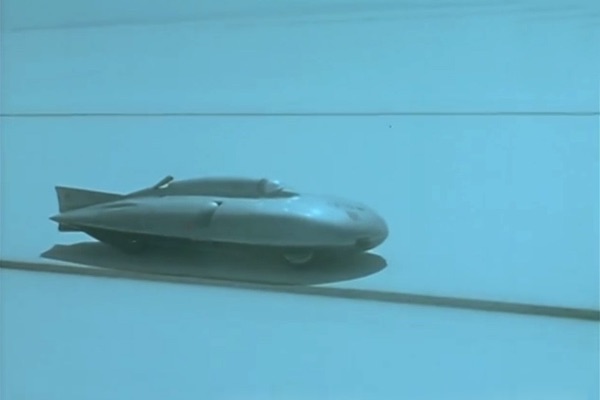 The record run had to be done twice, in opposing directions
© Screengrab from British Pathe, Youtube

The team’s aim was to cover at least 4 miles per minute when the EX181 was travelling at maximum velocity. This meant the peak speed had to be at least 240 mph (386 km/h). To account for wind in the vast dried out lake bed, Stirling Moss had to drive twice in the opposite directions. The average result was 395.31 km/h, smashing the previous record of 327 km/h and around 10 other records along the way. Most importantly, Sir Moss survived and carried on with his magnificent racing career. 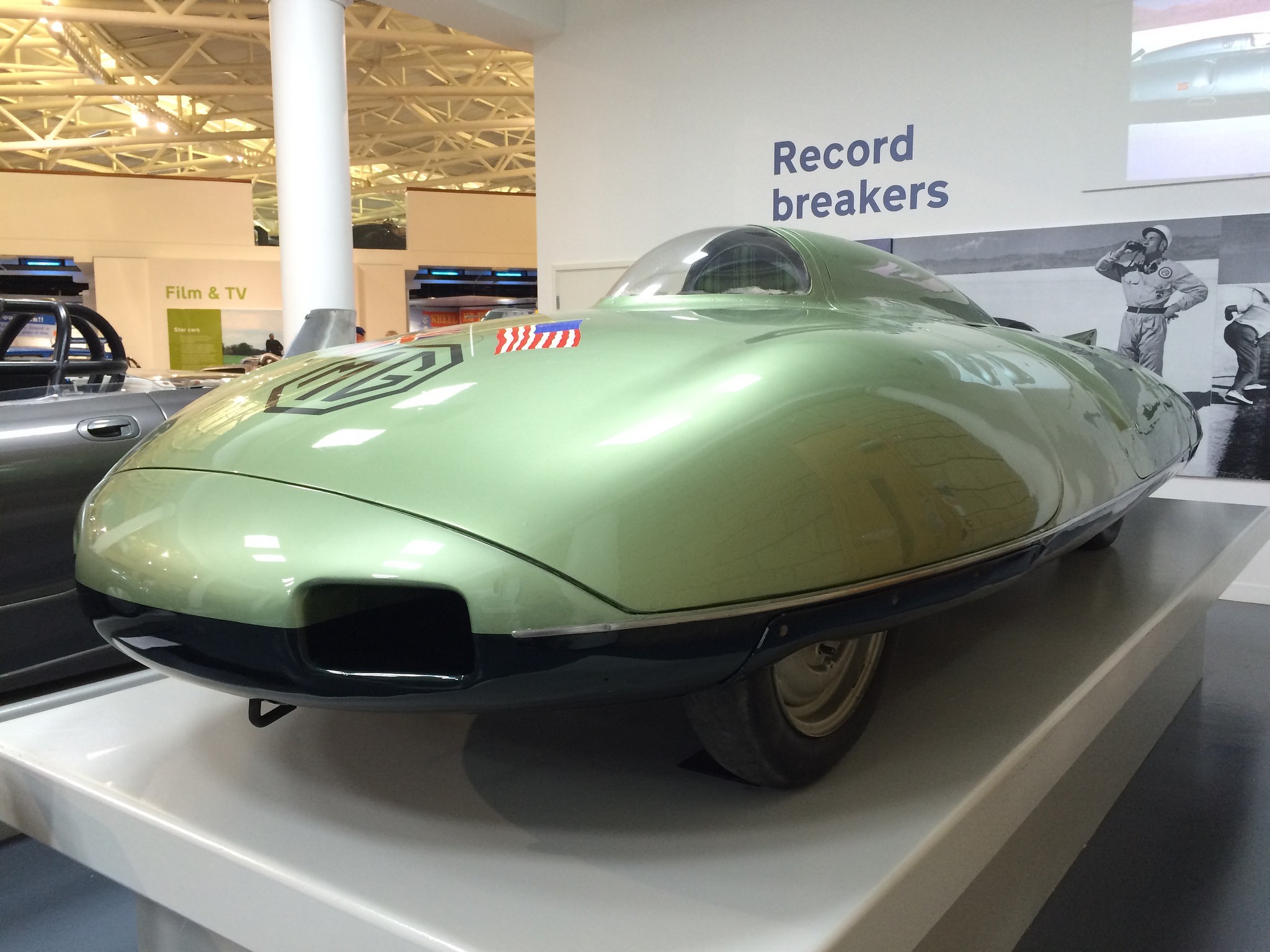 MG was not done just yet either, they came back to the Salt Flats in 1959. This time the engine was bored out to just over 1500 cc, putting the car in a higher sub-2 liter category. This way MG could attempt to beat a record in a different class. With more displacement and a few other tweaks, the teardrop shaped car with Phil Hill behind the wheel achieved 410.23 km/h average in both runs. That is more than the original Bugatti Veyron could reach with more than three times the power. It just shows you how far the 1950s aerodynamic witchcraft could go.