Mercedes C111 - the Sports Car that Gave Us the Turbo Diesel

The saying “practice makes perfect” has a lot of truth to it. The older Mercedes weren't just inherently reliable, they were a result of some of the most notorious testing mankind has ever seen. There were no expenses spared in creating some of the most robust machines.

The Mercedes-Benz C111 is a classic example of a very expensive test bench that never went into production. Intended mostly to test the use of plastic-fiberglass in body construction and wankel engines it ended up collecting data for far more and even made it into the record books.

The first C111 that came out looked something like from Chop-Shop's garage. It was very edgy and had interesting proportions. This was because the rushed body was made from aluminium just so the chassis department could begin work on the suspension earlier.

Finally, when the Bruno Sacco design came out in 1969 the shape was a success. Not only visually. After some work in the wind tunnel the car's CD was crafted into a quite slippery 0.35. An interesting feature about the design is that the iconic rear opening was not in the original sketches - it ended up this way to improve visibility. 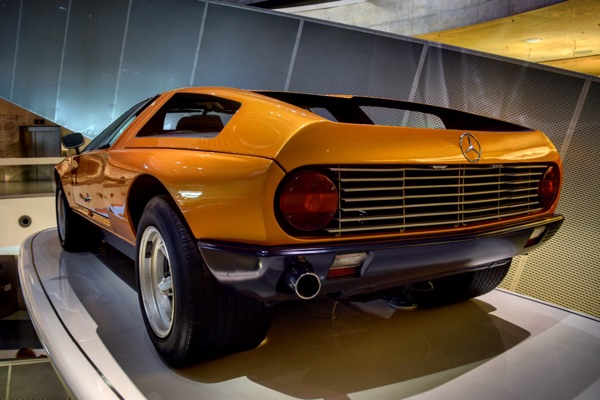 The iconic rear open area of the C111
© Personal archive 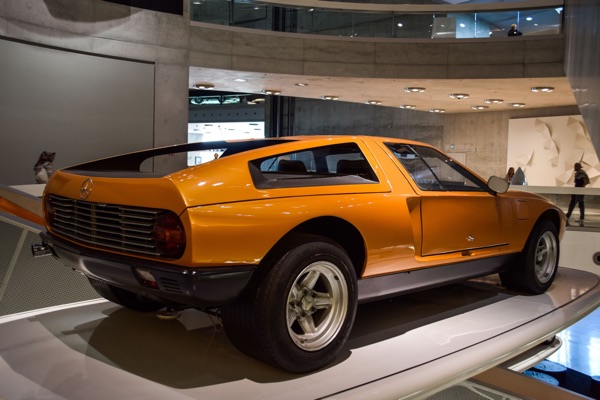 In the 1970s Mercedes wanted to make a properly competitive sports car. While looking for performance they turned to the wankel engine. At first they used a 3 wankel configuration which was good for 280 hp and could reach 270 km/h. Later they added one more wankel which made a total of 350 hp and could get the car into the 300 km/h club. The 0-100 time was also an impressive - 4.9s.

Although those numbers were very reassuring the fuel economy and most importantly the reliability weren't. The idea to use this engine was scrapped. Nevertheless, out-of-the-box thinking was not and for the second and third generations the engineers decided install a "filthy" diesel engine. They started out with the very passive 3.0-liter naturally aspirated 80 hp OM617 five cylinder and ended up with a record braking turbocharged 230hp masterpiece. This was enough to get the aerodynamic car to 314-321 km/h and keep it there for 12 hours with an average fuel consumption of 16 liters/100km. The duration and the fuel consumption were just a few of the many diesel and gasoline car records the C111 broke. The "filthy" out-of-the-box thinking paid off well.

Feeling encouraged Mercedes went even further to beat the unofficial average speed of 355.84 km/h record at the Nardo circuit. For that purpose, the final C111 fourth generation was created. Improved aerodynamics and a heavily modified M117 twin turbocharged 500 hp V8 put the previous record to rest with an average speed of 403.78 km/h. 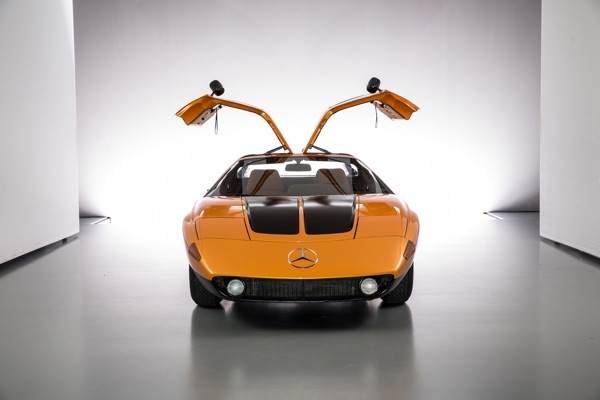 Like the 300SL the C111 had Gullwing doors
© Mercedes archive 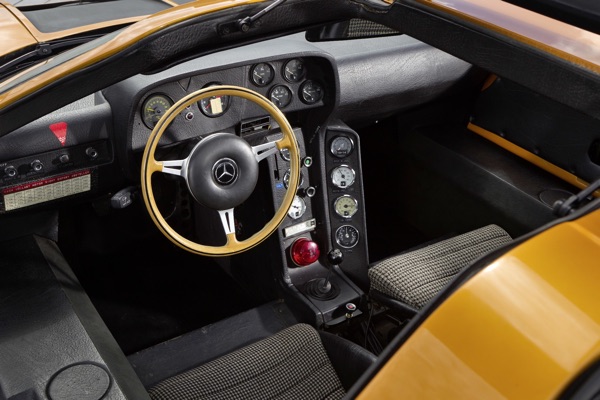 It was a completely functional interior with air conditioning
© Mercedes archive

Although allegedly Mercedes was sent offers in forms of blank checks to sell one of the C111s they were declined. The car never made into production mainly because the body did not meet the stringent passive safety standards. The plastic-fiberglass shell had no crumple zones, only snapping zones. Many were disappointed because it could have been a great successor to an another fast roadworthy record braking GT with gull-wing doors - the 300SL. 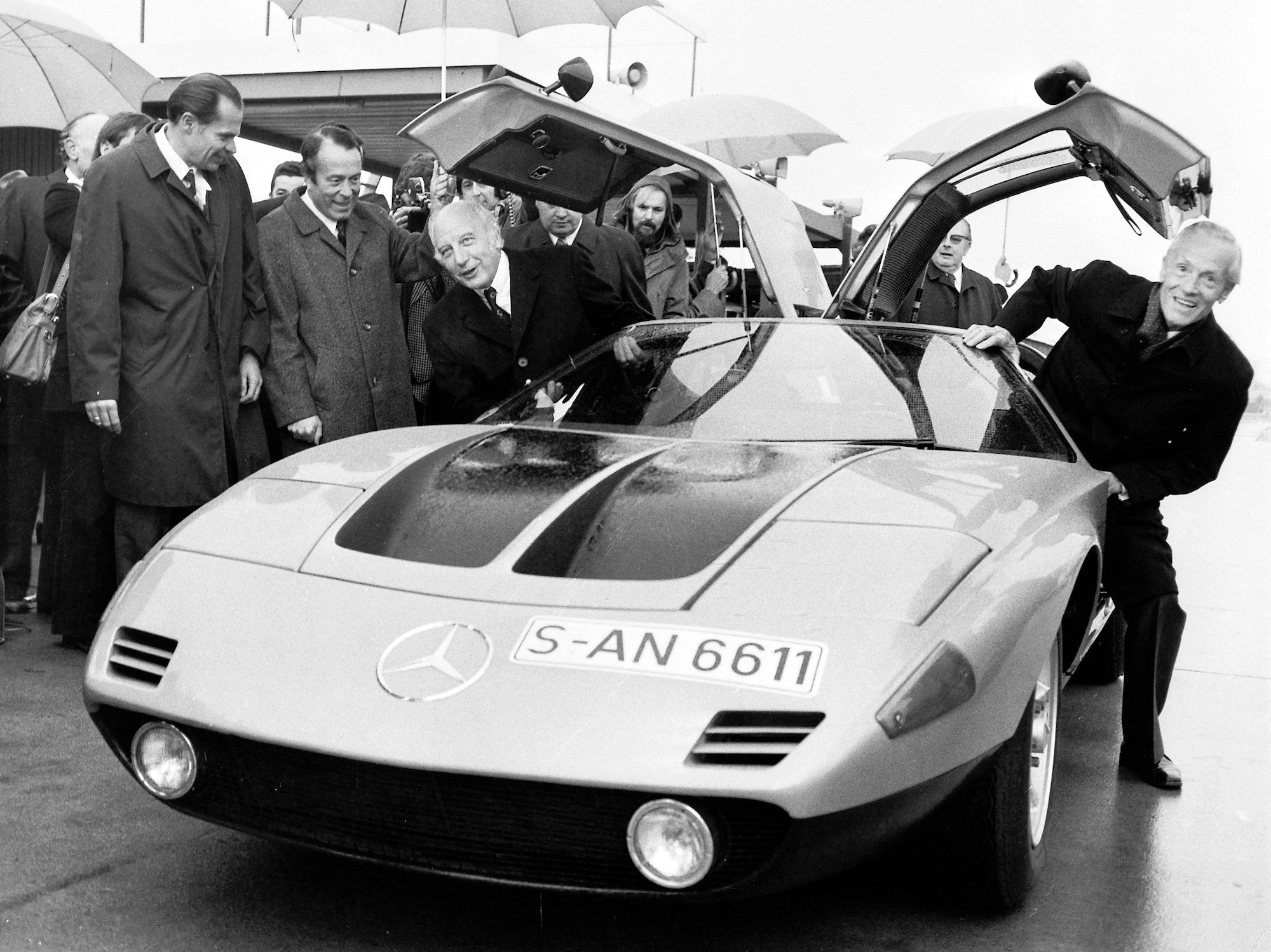 Despite this shortcoming there were a quite a few achievements. The C111's rear suspension made it into production and became the trademark multilink design and most importantly the successful diesel engine tests led to the world's first production turbo diesel - the 1978 w116 300SD. 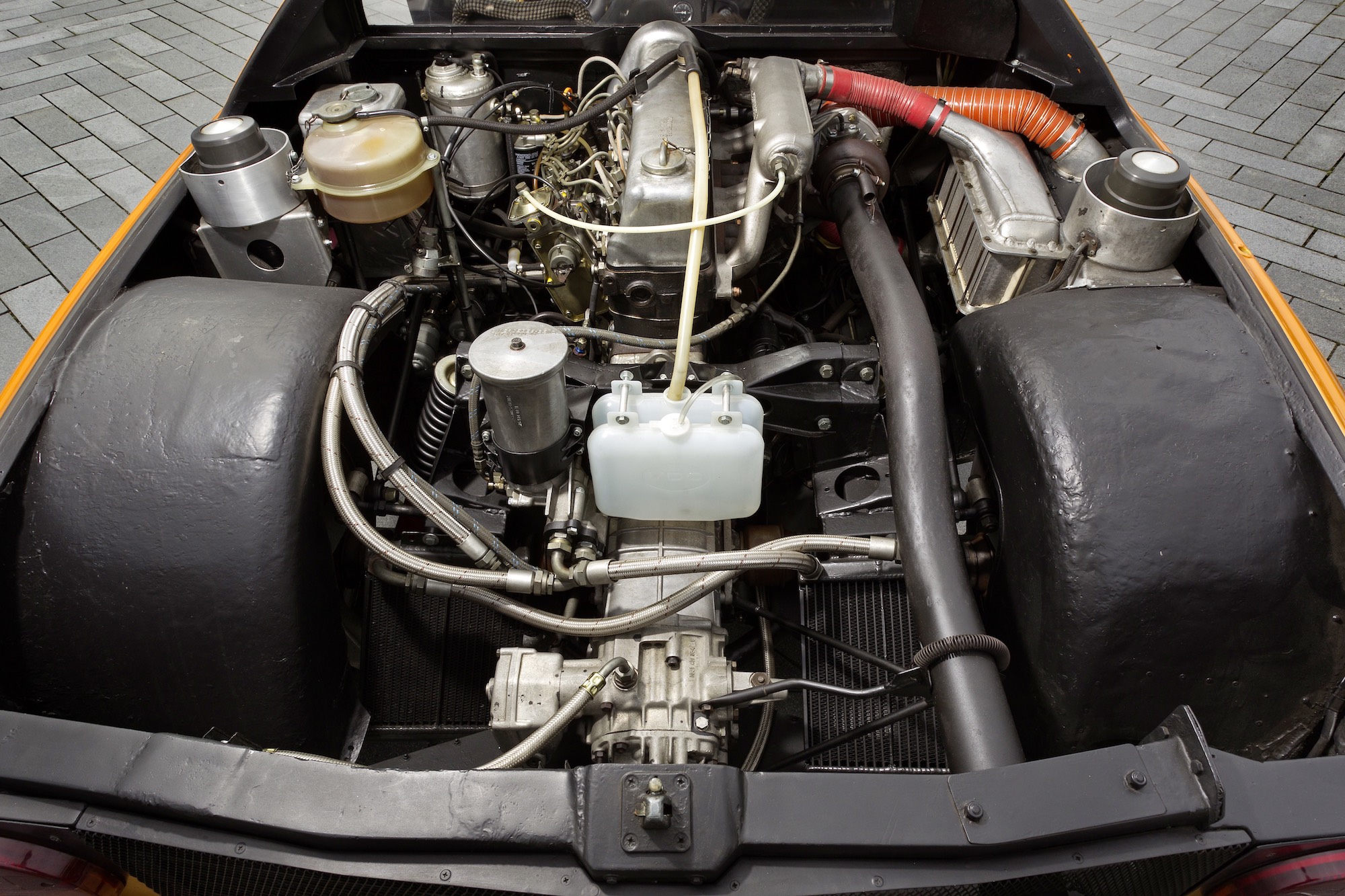 One of the biggest achievements - the turbocharged 3.0l Om617 diesel engine
© Mercedes archive

In 1991 the C111's successor - C112 was unveiled. It had nowadays well-known innovations like active body suspension control (abc), active aerodynamics, four-wheel steering, warning of upcoming traffic and a mid-mounted 6.0-liter V12. All this made it very desirable and Mercedes initially accepted 700 deposits which were all later returned because just like the C111, the C112 ended up for testing purposes only.