Most people associate Romania more with stereotypical Eastern Europe than with innovations in car manufacturing. Cheap Dacia Logans have flooded Europe's roads, but few would ever think of comparing their manufacturers with such innovative brands as Volvo or Citroën. But it was in Romania that the importance of aerodynamics in the production of cars was first truly understood.

Many people would say that the first aerodynamic car was the Beetle, which Hitler envisioned would soar down the autobahns of the Reich. Those more interested in the US industry might bring up the Chrysler Airflow that Detroit released back in 1934. Complete auto geeks would nominate the Czech Tatra, which was already making very unusually shaped cars before World War II. And it would definitely never occur to anyone to mention Aurel Persu's name. Yet he was the first one to realise what body shape meant at the time when all of the cars around could have competed with shoe boxes in terms of how streamlined they were.

Aurel Persu was born in Bucharest, Romania in 1890; in a Romania that had just recently become independent. It was the age of technology in Europe at that time. The Eiffel Tower was going up in Paris, Marconi was experimenting with radio waves, and young Aurel was captivated by engineering. Persu studied engineering science at the Royal Technical Higher School of Charlottenburg in Berlin and managed to graduate right before World War I began – in 1913. The young man's talent was already apparent while he was studying – just having turned 23, he was given an award by the German Ministry of Education for his research on the behavioural features of space ships in outer space. And all that at the time when spaceflight was considered not only a dream, but absolute science fiction that was only possible in the cinema, where actors landed on the Moon. 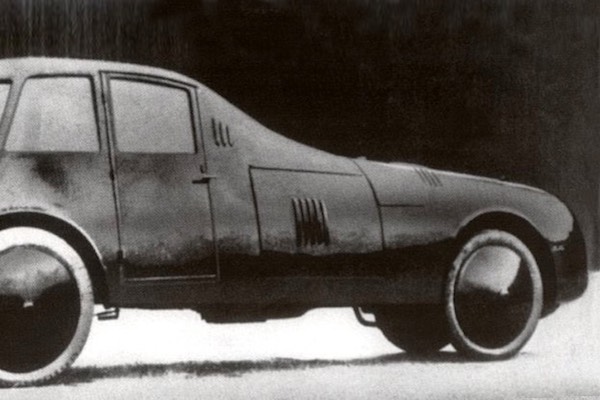 World War I ended, and as Europe rose from the ruins, it began to be flooded with cars. Given, they were nearly indistinguishable – at a distance, you could hardly tell if it was a Ford, a Citroën or an Austin jolting along the cobblestone streets – and not a single carmaker in the world was thinking about something as trivial as aerodynamics. Slick forms and headlights that weren't mounted on the fenders were for the noisy world of racing, while everyday cars were made as simple and cheap as possible – basically an engine moving a slightly modernised carriage forward. Aurel Persu understood that the car of the future could not be reminiscent of a carriage without horses, with it fenders protruding over the front wheels.

A sketch of aerodynamic car made by Aurel Persu
©automobileromanesti.ro

Persu stayed in Berlin – probably because the conditions for research were more favourable there than in his homeland – and devoted himself to calculations. The main objective of his calculations was to create the most aerodynamic car possible. Since it was difficult to find inspiration in the cars that were on the streets at the time, Persu took the route of another genius – Newton – and found the shape of the future car in nature. Or more precisely – in a drop of water.

In 1922, development of the most aerodynamic car in the world began, financed by Persu himself. That same year, he patented the shape of his future car, and it was very unusual compared to the cars clattering on the roads at the time. In 1924, his patent drawings finally materialised into... a vehicle that looks very out of the ordinary, even today. The drag coefficient of the Tesla Model S – one of the most advanced cars ever produced – is Cx 0.24. For most of the cars made by Persu's contemporaries, this number was as much as Cx 1. Meanwhile, the drag coefficient of the car created by Persu was Cx 0.22! Nearly 100 years ago, the genius had already designed a car that was more advanced than the Model S that is called the car of the future. 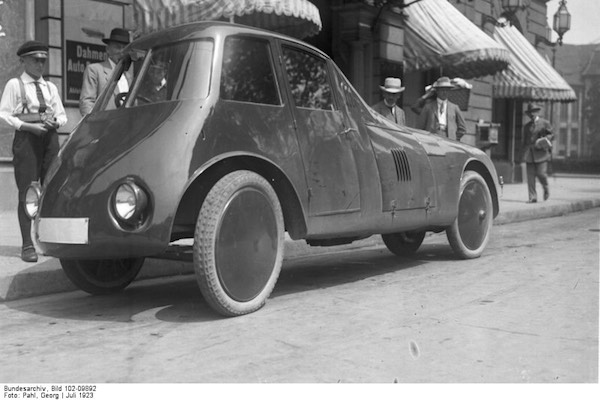 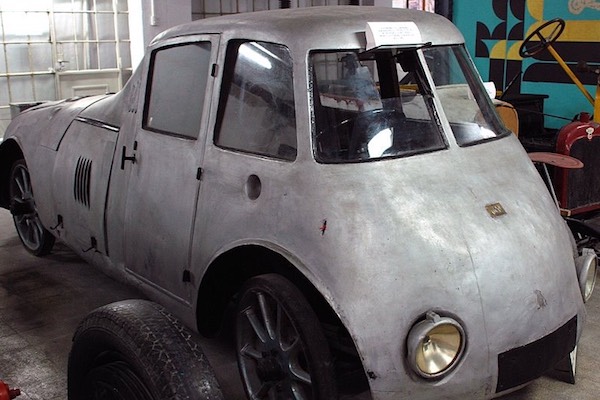 The drag coefficient of the car created by Persu was Cx 0.22
©Dimitrie Leonida Technical Museum archive

Now to sidetrack a bit. Have you ever wondered what was the first car to have pontoon styling – that is, without running boards or protruding fenders? Russians love to push the idea that it was their post-war Gaz M-20 Pobeda. Germans would retort that it was the Hanomag 2/10 PS "Komissbrot" ("Loaf of Rye Bread") – a small economy car manufactured in Germany during the era of the Weimar Republic. And that would also be wrong. The first car in the world to have integrated fenders was the aerodynamic masterpiece created by Aurel Persu.

Admittedly, the car was quite primitive from a technical point of view, despite its modern shape. Cable brakes were only used for the rear wheels, which (due to the small distance between them) did not have a differential. The inline-four engine, 10 horsepower and insanely aerodynamic body made it possible for Persu's car to accelerate up to 80 km/h. It should be noted that due to the lack of a differential, the car was able to make very sharp turns at considerable speeds without any danger. 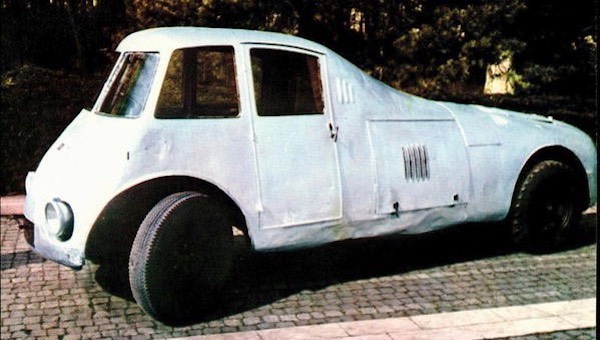 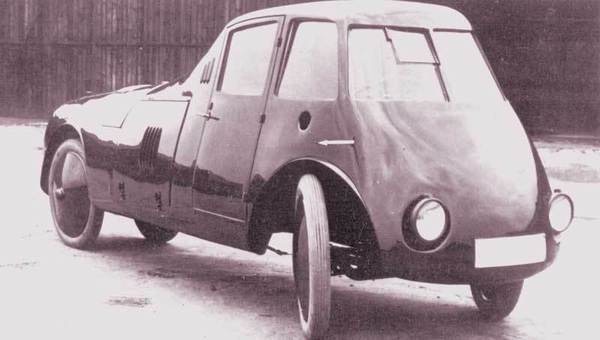 It probably would have been successful in racing if Persu could have somehow managed to organise mass production of his car. Actually, the car had a chance of making it to the assembly line. Both Ford and General Motors had approached the engineer in an effort to buy up the patent for production of the car, but Persu turned them down and used the car himself until 1969, when he gave it to the Romanian National Technical Museum in Bucharest, where the car is still safeguarded today. It no longer runs and needs to be restored, but it is still on exhibit, which means that you can see one of the most aerodynamic cars ever created with your own eyes! 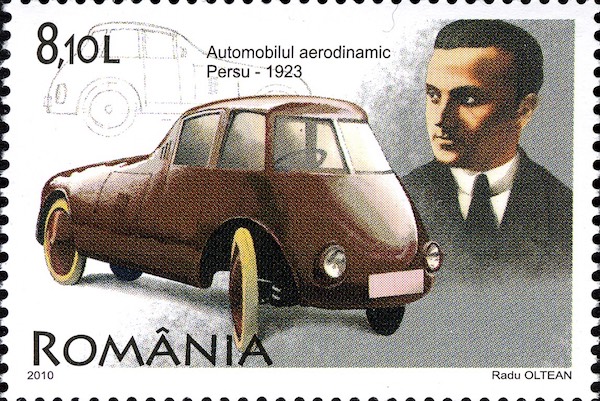 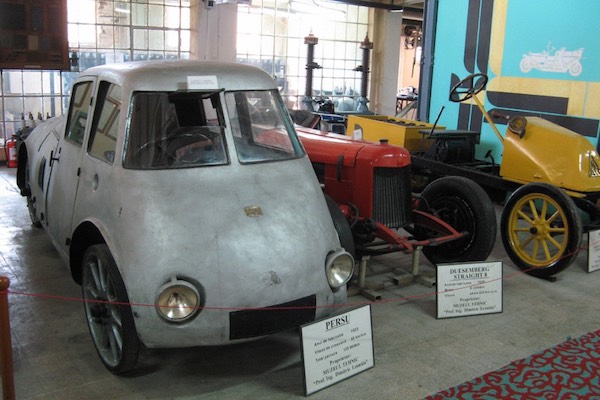 Having returned to Romania together with his car, Persu himself never left his homeland again. The engineer retired in 1950 and died in 1977, after writing a number of scientific papers on engineering and aerodynamics. Due to the Cold War and Romania's isolation behind the Iron Curtain, Aurel Persu's talent and works had been widely forgotten in the world of cars. In 2006, the national television and World Auto magazine – in an effort to publicise Persu's name and works – founded the Aurel Persu Aerodynamic Car Award for cars with a drag coefficient of less than Cx 0.3. The award has since been presented to the Opel Insignia and a few other cars.