The year is 1956... A lone sports car is flying down an empty road. Wonderful composition, speed stopped for a moment, and a beautiful contrast between the blur of the road and the sharp contours of the car. Looking at the shot, it’s almost as if you can feel the power and hum of the Ferrari 250 GT’s engine.

However, in the lower right corner of the frame, you can see a fragment of the car that the picture was taken from. This is a press car, carrying René Pari, who took this spectacular photograph that captured an episode from the 1956 Tour de France Automobile race and its participants – the Spaniard Alfonso de Portago and the American Edmund Nelson, who were in first place at the time. One year later, these two drivers were tragically killed in a crash during the 1957 Mille Miglia.

Looking at it from today’s perspective, the photograph On the Road to Victory – Alfonso de Portago – Tour de France 1956 doesn’t really seem like anything special, but it is a small part of motor sport history. On the other hand, Pari’s acrobatic and professional skills also have to be given due consideration, since he took this shot leaning out of the rear window of a car with a classic twin-lens Rolleiflex camera which was not designed for such extreme situations. 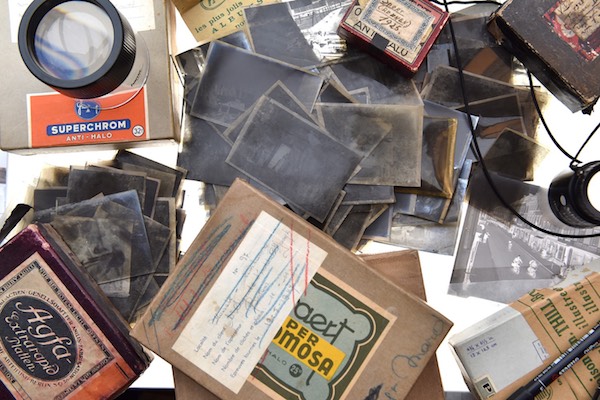 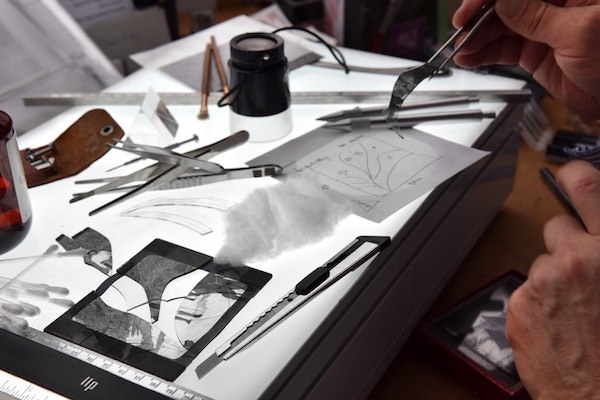 Restoration artists‘ goal is to blend the best of the original with the advanced technology of today
©MB&F M.A.D.Gallery 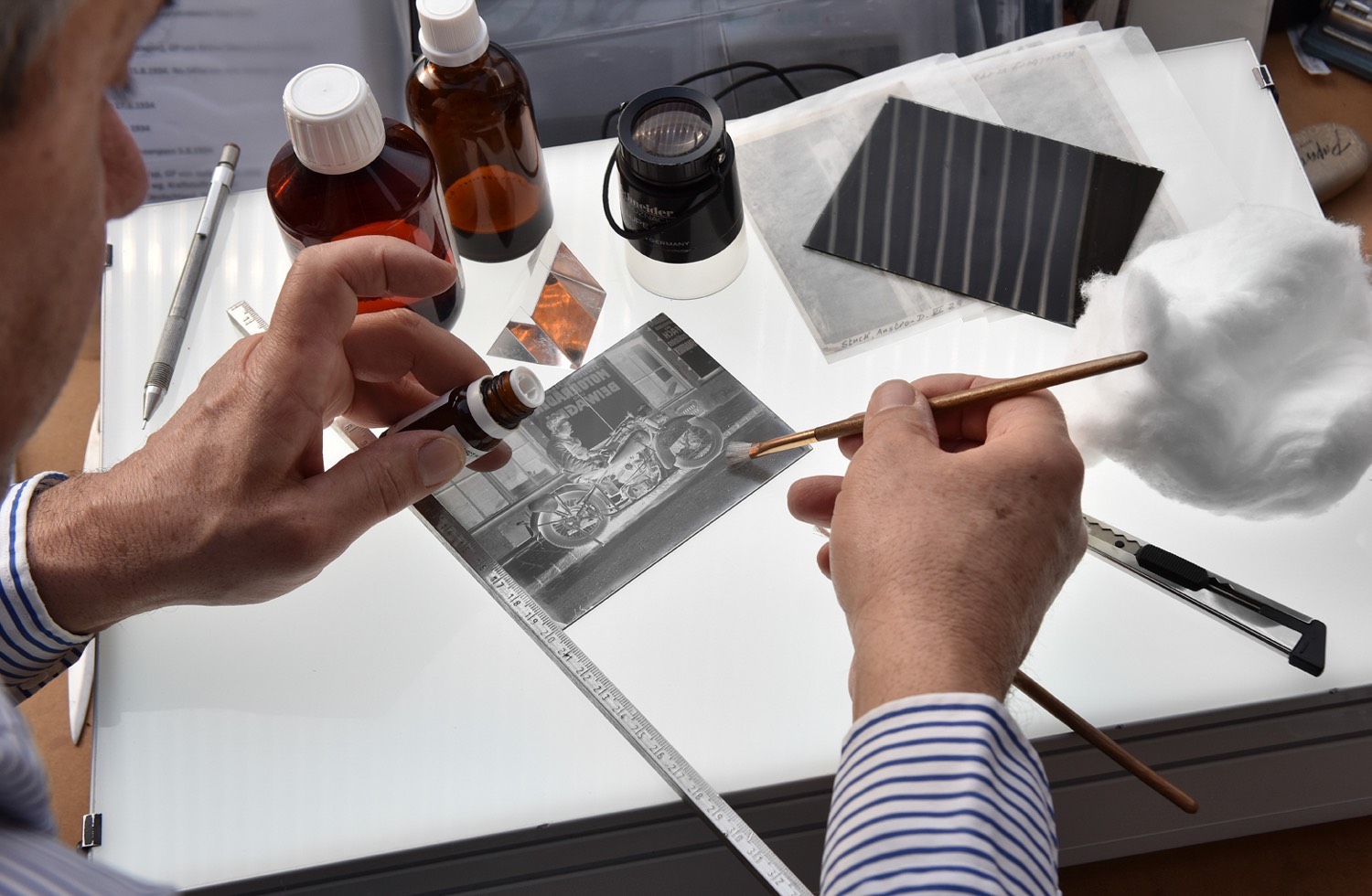 Meticulous restoration work may take a few hours for a gelatine negative up to several weeks for a highly damaged glass plate
©MB&F M.A.D.Gallery

René Pari was born in Paris in 1913 and began working as an aerial photographer in 1935 while serving in the army. Immediately after WWII, he began his career as a photojournalist for Libération, a daily newspaper, and collaborated with the French-Presse agency and other publications – France-Soir, France-Dimanche. In 1951 he began working at Le Figaro and photographed many of the celebrities of the time. However, Pari was also a great motor sport enthusiast and was constantly out there on the most famous tracks, capturing many of the most notable racing drivers of that time. He died in 1974, just a few weeks after the 24 Hours of Le Mans.

Many people are fascinated by classic and historic cars, and enthusiasts are trying to preserve and thoroughly restore this technical heritage. Automotive history is captured in photographs, but time is merciless for them as well, so various fragments of this history are irretrievably lost. Two motor sport enthusiasts, Daniel Berque and Serge Brison, could not come to terms with that. They met in 1995 while participating in the Liège-Sofia-Liège rally. After that, they raced together on various occasions, including six times at the Monte Carlo Rally alone! And that’s how they went into business together. In 2009, they opened the Art Speed Gallery, the aim of which is to preserve the historic heritage of automotive racing while delivering human emotions through each artistic work. 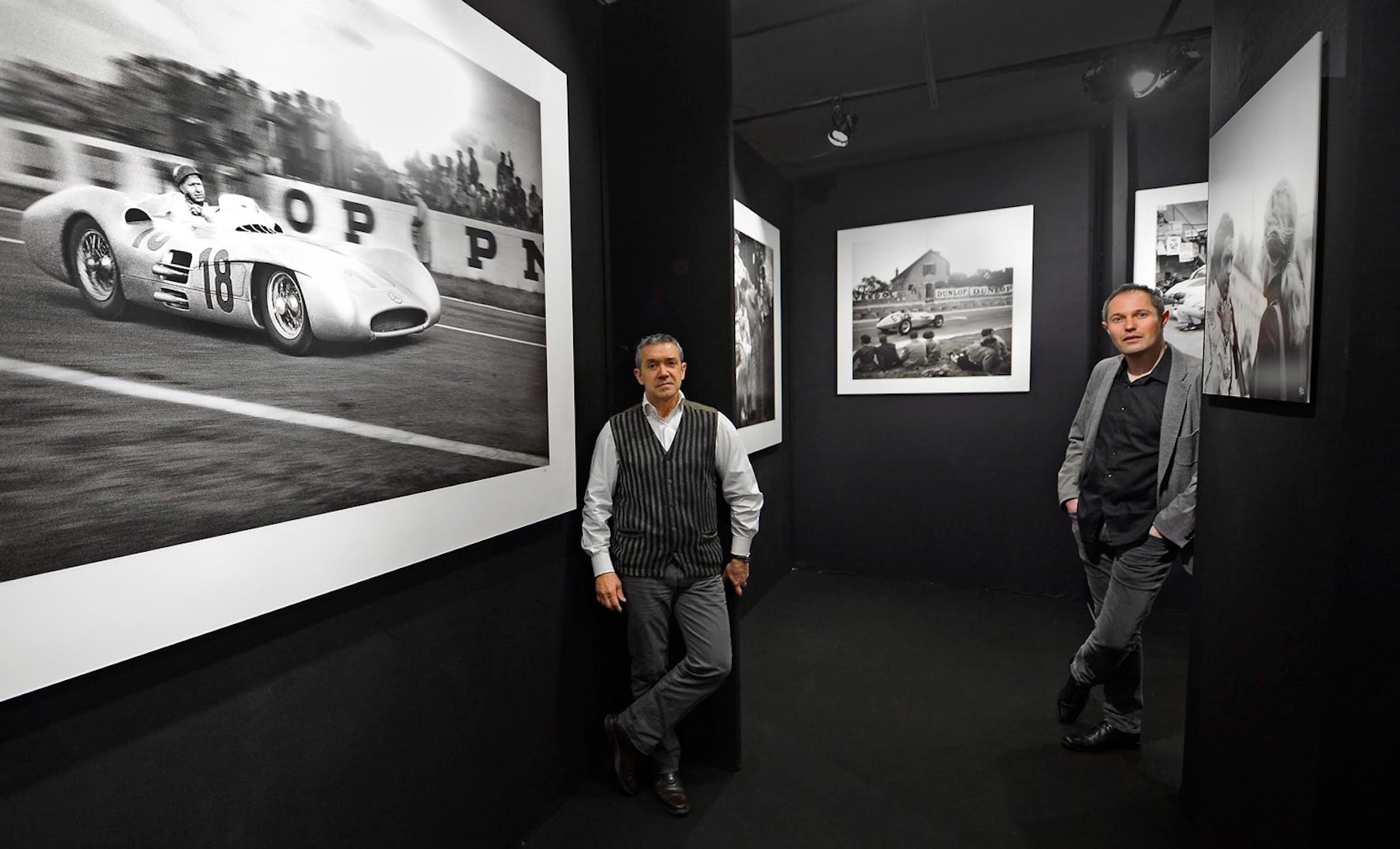 The two men’s job and mission is to look for and rescue negatives themed around automotive racing. Over the past ten years, they have been constantly travelling the world looking for rare and unique pearls of photography, being especially keen on glass-plate negatives. Berque and Brison have gone through tens of thousands of negatives and have purchased hundreds of the most valuable. This is followed by a long and meticulous job – using modern technologies to restore the negative and give it back its original quality. 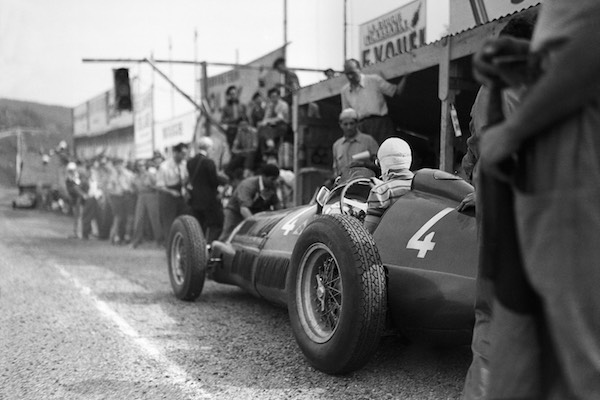 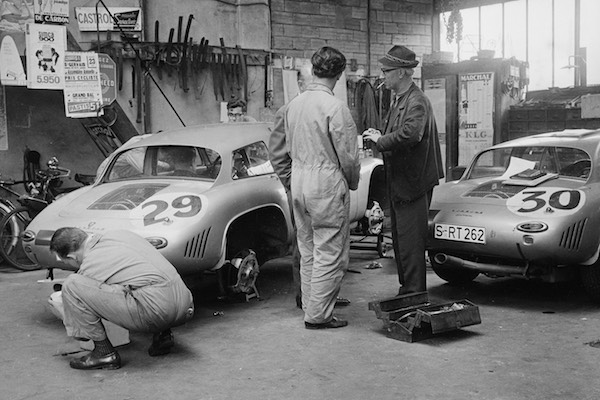 The secret preparation of the Porsche team for the 24 Hours of Le Mans in 1963
©René Pari / MB&F M.A.D.Gallery

This begins with a talented team of restoration artists to remove the marks of time, including breaks, scratches, slits, folds, and stains, using specific techniques depending on the nature of the problem. In many cases, this requires an enormous amount of work and time depending on the photographic negative mount along with its age and level of preservation. This meticulous restoration work may take a few hours for a gelatine negative up to several weeks for a highly damaged glass plate. The work finishes with fine-art-quality printing of the negative, a crucial and decisive stage to properly frame the work of the artist.

“We scrupulously respect the negative of the photographer; we don’t have the moral right to make any changes or modifications to his work,” explains Berque, “It’s also this strict respect that gives our collection its exceptional and unique nature.” 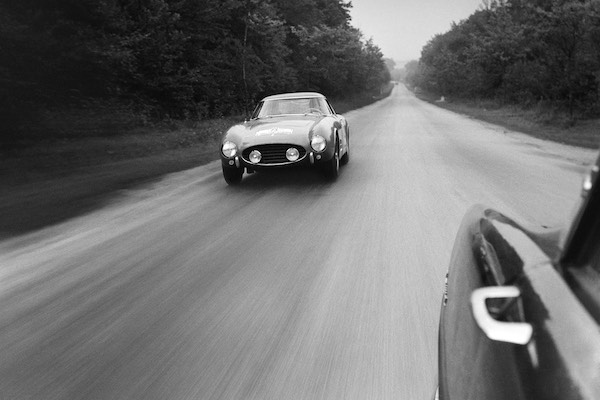 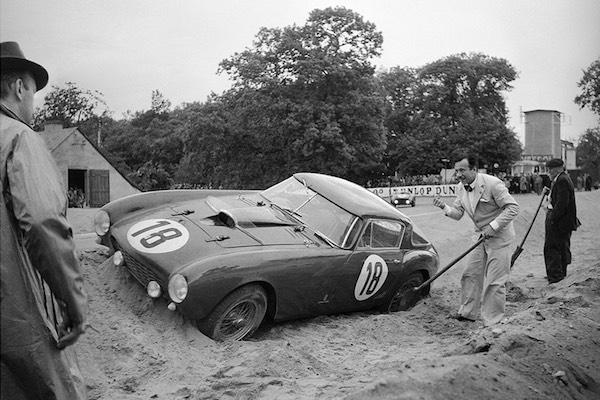 Historic photographs which are available for purchase are currently on display at Geneva’s MB&F M.A.D.Gallery, the owners of which are unquestionably crazy about Berque & Brison’s work.

“Motorsport is clearly a mechanical thing, but the story is mostly about human relationships. Behind every adventure are the men and women,” Berque explains. 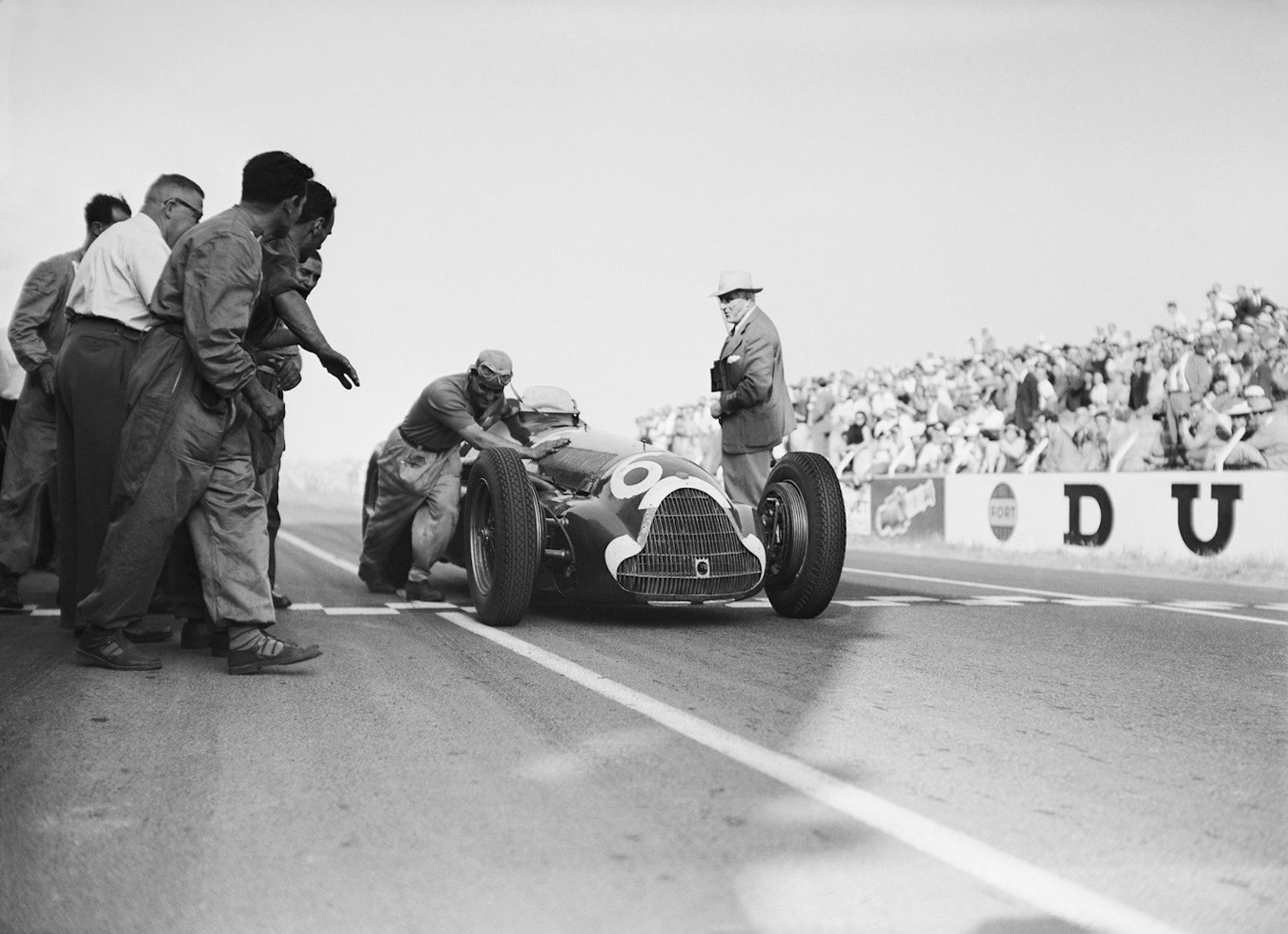 The grit and perseverance of works driver Consalvo Sanesi pushing the Alfa Romeo 159 no. 6 after a mechanical failure
©René Pari / MB&F M.A.D.Gallery

Each original negative produces a limited collection of 21 fine art photography prints by René Pari and anonymous authors bearing a certificate of authenticity, including a serialized hologram. The artworks are printed on museum-quality paper and mounted under Diasec, a premium anti-reflective acrylic glass, and framed in aluminium.