It’s hard to imagine the United States of the 1950s without suburban homes with white picket fences, rock and roll, and a lot of cars. Standing out among the cruisers from Detroit with their tail fins held high and the imports from Europe that were just beginning to find their way onto the Interstate were hot rods – cars from the 1930s and 1940s with lowered rides, almost completely stripped-down bodies, wild paint jobs, and teenagers behind the wheels. Even now, they are recognised around the world as symbols of American culture just as much as the Big Mac. Where did this car culture come from, how is it doing now, and what are its prospects for the future?

The precise origin on the term “hot rod” is unknown. There are several theories, with one being that “hot” refers to the car being stolen (making it a much more interesting choice in races where only one will survive), and another that “rod” is short for roadster. However, the most popular theory is that it comes from “hotting up”, which means modifying a car for greater performance. The hot rod’s forefathers were the modified cars driven by moonshine runners – how else were you going to elude the cops during the Prohibition?

The first real hot rods appeared in California. Back in the late 1920s and early 1930s, there was a growing number of Ford Model T and Model A that had seen their day. At the time, these were the most widespread cars around, so you could get a used Ford for under 50 bucks. Even in America just coming out of the Great Depression, this was not a lot of money, so this is how many youngsters bought their first wheels. But what kind of young man would be satisfied with a standard Tin Lizzy, sporting the black paint that was the only option the factory offered and hardly able to make it down the road? 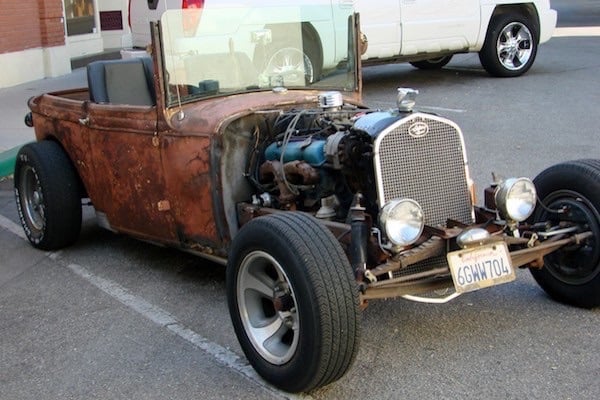 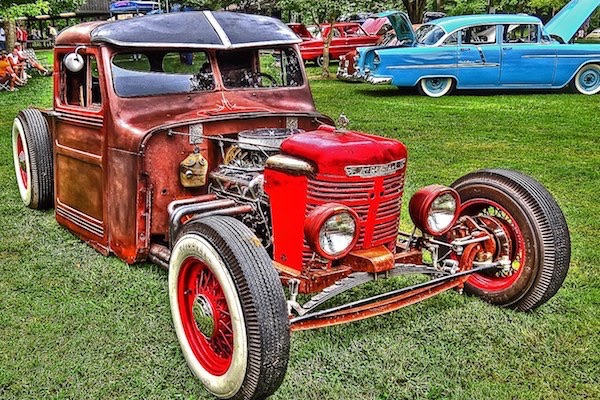 The first modifications started with the engines. In the early 1930s, Ford launched its first V8 engine, and in a few years the junkyards – which is where hot rodders used to shop for parts – were full of them. A Ford Model A or Model T (at first it had to be a roadster so that it would be as light and fast as possible) would be fitted with a V8 engine, its body would be stripped down as much as possible, what remained of the body would be painted with bright colours and drawings, and voila – you have a pre-WW2 hot rod.

Teenagers would race these hybrids on dry lake beds or in the deserts, which California had plenty of. And this is how the Sunny State became the cradle of hot rod culture. Those V8s created a real revolution in the late 1930s – the junkyards became overloaded with them and you could put one in your flaming beauty for just a few dollars and fly from a standing start along the Californian landscape. The main thing was for it to be as cheap as possible, which was the essence of the hot rod movement. 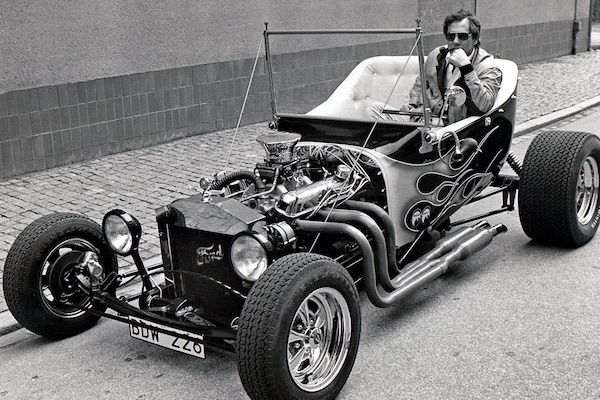 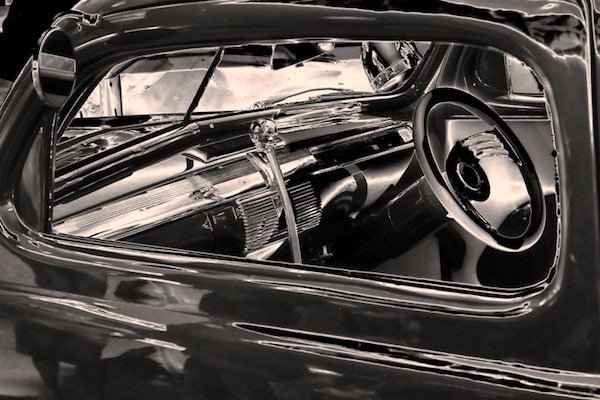 However, the hot rod culture also had its cons – even though they mainly raced on dry lake beds, the hormones, the powerful engines, the old Ford’s poor handling (some hot rods, especially the Ford Model Ts, still had brakes that were controlled by a cable rather than hydraulics), and the fact that there was no other transport around was a lot for the local teens, and serious accidents were not uncommon at their races. 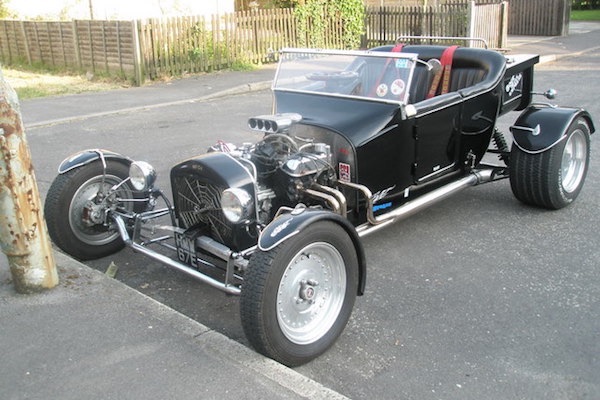 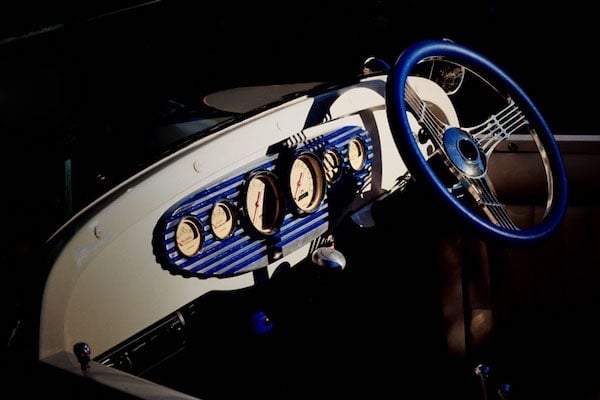 But the real zenith of the hot rod’s glory was at the end of World War II, which directly contributed to the spread of hots rod across the States – for a lot of young veterans, sticking a V8 in an old Ford was a form of self-realisation. Especially in California, but in other states as well, more and more performance tuning shops began popping up that could make hot rods for anyone who wanted one. And although anything that came out of Detroit could become a hot rod, most hot rodders chose something from Ford or Mercury – to this day, these are the brands that are recognised as the most authentic hot rods.

The cars were lowered, repainted with several layers of paint, and decorated with various drawings. They were fitted with mufflers that changed the sound of the engine, etc., and most importantly – a V8 flathead engine to make them suitable for racing, sometimes even to the death. Admittedly, hot rodders later took a liking for engines from other Detroit manufacturers as well, especially after more advanced models were introduced with better characteristics than Ford that made them faster. 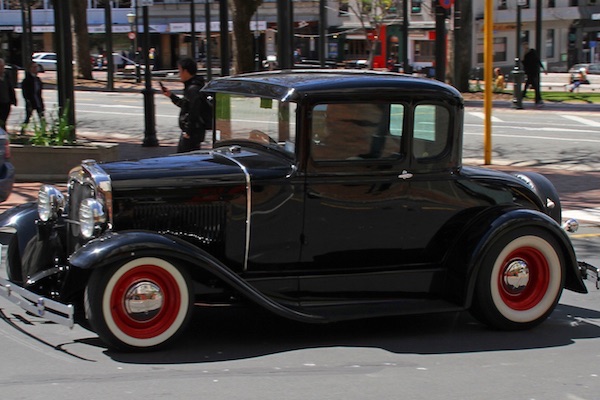 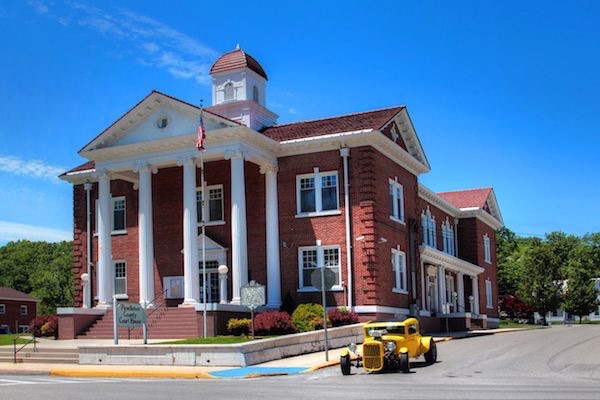 Hot-rod on the crossroad
©Wikimedia Commons

By the late 1940s, hot rod fever had spread throughout the States and they quickly became a popular adolescent attribute that Hollywood took a fancy to as well – for example, Rebel Without a Cause, which was one of James Dean’s most celebrated films, features quite a few hot rods. The hot rod culture spread, and, along with rock and roll, started the greaser subculture among teens, with modified cars becoming one of their symbols. As this expanded, publications devoted to hot rodding started to emerge, the first being Hot Rod magazine, which began to be published in 1948. Official hot rod racing associations followed, which made it possible to legally race on closed drag racing tracks without having to worry about the police. Hence, it was from the hot rod culture that the drag racing that is still popular to this day was born.

Given, the hot rod cultures on the east coast and the west coast were somewhat different. While in California, hot rods were true works of art that sometimes had nothing left in common with the original car, the hot rod design in the eastern part of the country was a bit more subtle and focused on technical capabilities. 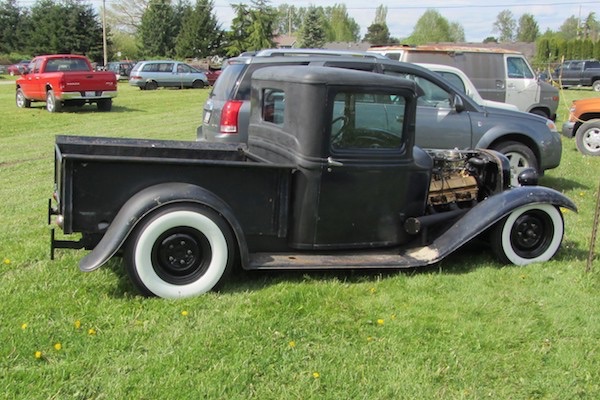 The 1949 Mercury Eight (which among enthusiasts is considered the last suitable model for constructing real hot rods) even led to the emergence of a separate hot rod sub-culture: lead sleds, the essence of which was to make the car as smooth as possible by lowering the Mercury, “shaving” off the unnecessary trim, and giving it an aggressive paint job. Teenagers tinkered with old Fords in suburban garages everywhere, turning them into real gems that they’d take out on Saturday night to cruise around town and go to the drive-in. It seemed like the hot rod’s glory days would never end, but...

In the mid-1960s, Detroit came out with two new classes: the muscle car and the pony car. Suddenly there was no longer any point to making your own fast car when you could get a stallion (or a Mustang – pun intended) with a few hundred horsepower at the nearest car dealership. The hot rod culture quickly began to fade, and died out completely by the mid-1980s – the growing population of sporty European and Japanese cars also contributed to its demise. 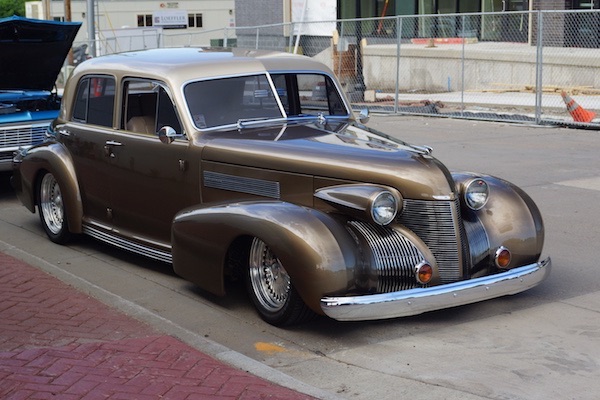 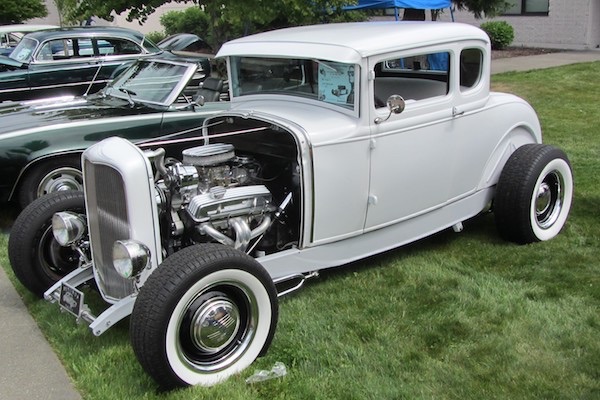 However, hot rods became trendy again in the early 1990s, just this time not as a way for teenagers who wanted to race to spend their evenings, but as a separate type of performance tuning. The hot rod movement is alive again today, and Ford recently began producing the 1940 Ford Coupe body expressly for hot rod enthusiasts. However, if you want to join in on the fun, you’re going to have to dig deep – a hot rod built on a Ford or a VW Beetle can set you back tens of thousands of dollars. And they’re not available in all countries – mostly just in the USA, UK and Australia.

Incidentally, Sweden and Finland have their own type of hot rods – since there aren’t many old American cars like the Model T left in Scandinavia, the Swedes make replicas from old Volvo parts and even have their own hot rod clubs. And the Plymouth Prowler that was introduced in the early 2000s was launched with that precise intention – as a 21st century hot rod. So the culture that gave the world things like drag racing, hot rod shops and performance tuning is alive and well today, and is likely to continue to flourish in the future!