The name of Pagani is known all around the world. A joint venture of Italy and Argentina began in 1992. Shortly after, the company became famous for its sports cars. But Pagani's story began earlier and is closely related to Lamborghini.

Horacio Pagani, an Argentinian immigrant, came to Italy with a dream to work in the auto industry. All he had was a recommendation letter from the F1 champion Juan Manuel Fangio. It allowed him to get a job at Lamborghini and become the chief engineer. 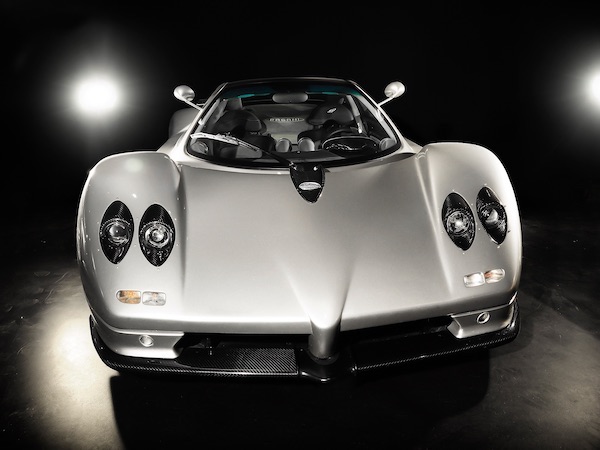 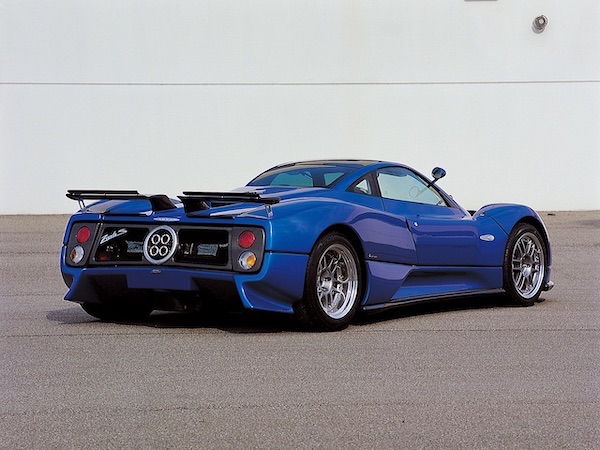 H. Pagani saw this as an opportunity, left Lamborghini in 1988 and opened his own company - Pagani Composite Research. This company worked with different Lamborghini projects and later built its own car, which was called the C8 Project. Pagani wanted to name the model Fangio F1 - in honour of Pagani's buddy, Argentinian F1 champion Juan Manuel Fangio.

In 1992, the company started to construct Fangio F1. In 1993, the prototype was already being tested at the Dallara wind tunnel. After a year, Pagani made a deal with Mercedes-Benz and bought V12 engines from them. In total, the final product would cost 2,300,000$.

However, in 1995, H. Pagani's friend Fangio died. That is why in 1999's Geneva International Motorshow, the first Pagani vehicle was presented - Zonda C12. In Argentinian language, Zonda means hot, dry wind. The car had 6-litre, 444 HP engine of 640 Nm torque, and six-speed gearbox that would allow to reach 100 km/h in just over 4 seconds.

Until 2017, when Pagani stopped the production of the Zonda model, there were 140 cars made in total. 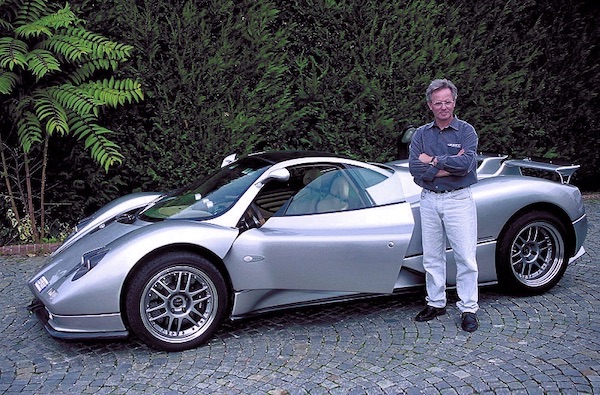 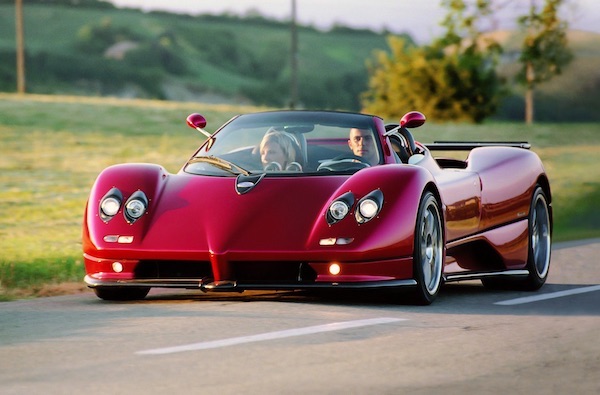 There were only 5 of first Pagani models made in total. One was used for crash testing, the second one served as an exhibition model, and the remaining three were sold to clients. What is interesting is that the first car that had 001 plates and was wrecked in a test, Pagani brought it back to life in preparation for 2019, the 20th anniversary of Pagani Zonda. Despite that, there is only one bright yellow Pagani Zonda C12 currently driving on the Swiss roads.

Zonda S came out after Zonda C12, and later in 2002 Zonda S 7.3 model. It got such a name because it had a new Mercedes-Benz AMG 7,3-liter engine with 547 HP. Because of the increased power, additional security systems were necessary: traction control and ABS were included in the standard supercar's set. After a year, Pagani made a convertible version of it - Zonda Roadster. The company assured that the car would not be weaker than the coupé version. It weighed 30 kg more than the standard model. In total, there were 40 roadsters made. 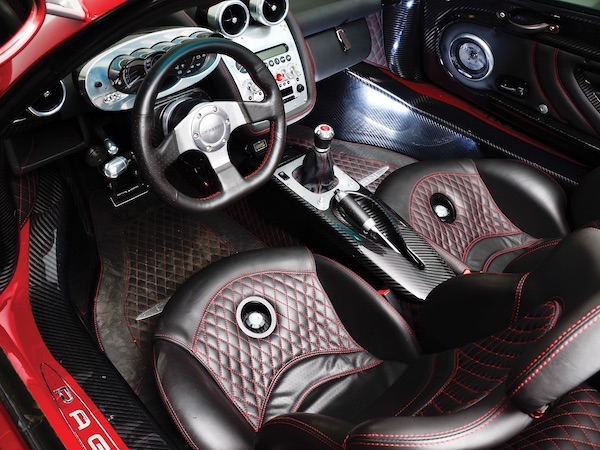 In 2005, Pagani released Zonda F, or Zonda Fangio - a model that got H. Pagani friend's name. A convertible version came out a year after. To create the latter, the company used a lot of methods learned on a racing track. As a result, the roadster would weight as much as coupé. There were 25 units of the coupé model made in total, the same as the roadster.

In a history of Pagani, there is a Zonda racing version In 2007, Pagani presented the Zonda R model. It had the engine from Mercedes-Benz CLK-GTR with 730 HP and 710 Nm. The official calculations suggest that the maximum speed of this limited edition (only 15 units were made) car is 375 km/h, reaching 100 km/h in 3 seconds.

In 2009, Zonda Cinque first saw the daylight, and later Zonda Cinque Roadster roofless model. In Italian, Cinque means "five" - that is how many roadster and coupé units were made. By the way, this model has been built by Pagani-dealer from Hong Kong.

Cinque had 7,3-liter, 669 HP engine with the max torque of 780 Nm, as well as six-speed sequential gearbox which allowed to increase the acceleration to 100 km/h to 3,4 seconds. Besides, the model's bodywork was made out of specific carbon fibre and titanium alloy (carbo-titanium). It improved the bodywork's firmness and stiffness. 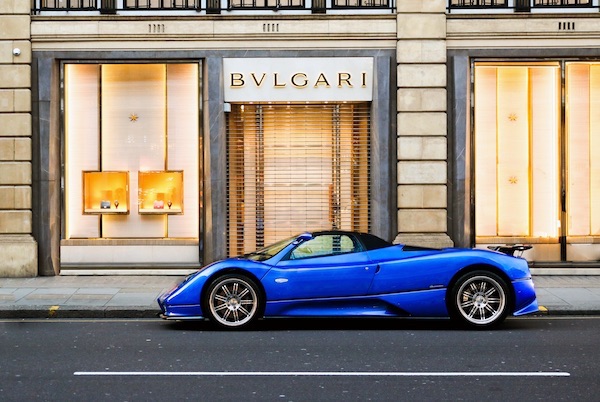 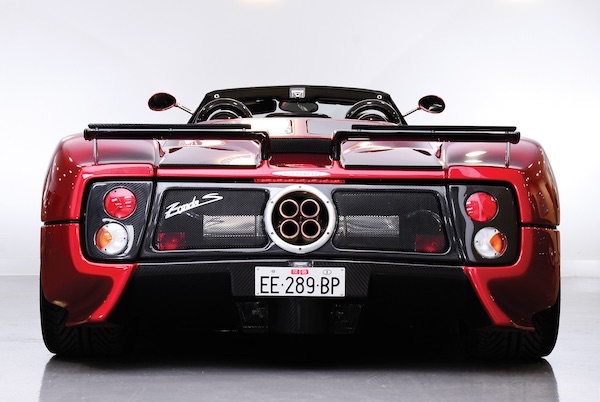 Making only a few supercars in a year, Pagani had plenty of time for unique Zonda versions. Zonda Tricolore released in 2010 had to be one of a kind. However, there were three models made for Frecce Tricolori, an Italian team of acrobats. This model inherited many details from Zonda Cinque. The bodywork was not painted but covered in transparent blue polish, and in front, there were three stripes painted - red, white and green. It is presumed that the Zonda Tricolore model costs around 2,000,000$. 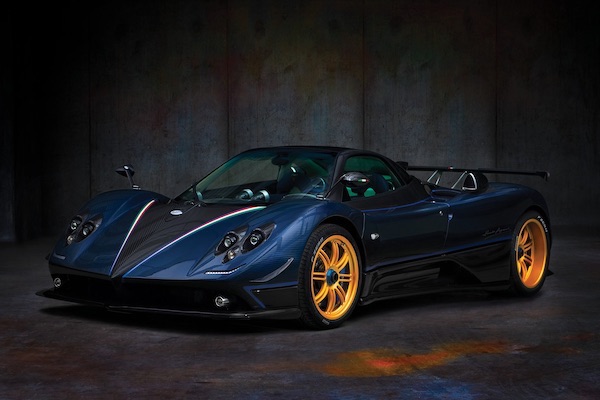 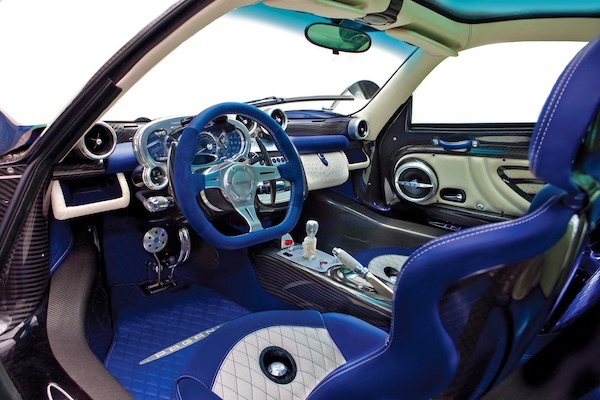 Another unique version was Zonda Revolucion. This model, which had to be the last one, was intended for special clients and Pagani family members and came out in 2013. Under the hood - 6-litre, 700 HP and 729 Nm torque engine. The car weighed a bit over 1 ton. This unusual model has DRS system just like F1 race cars, and two driving modes: one is for driving below 100 km/h, and the other one when going faster, shifting rear-end position and increasing the force of compression. There are five Zonda Revolucion models, and each costs 2,000,000 Euros, taxes not included. 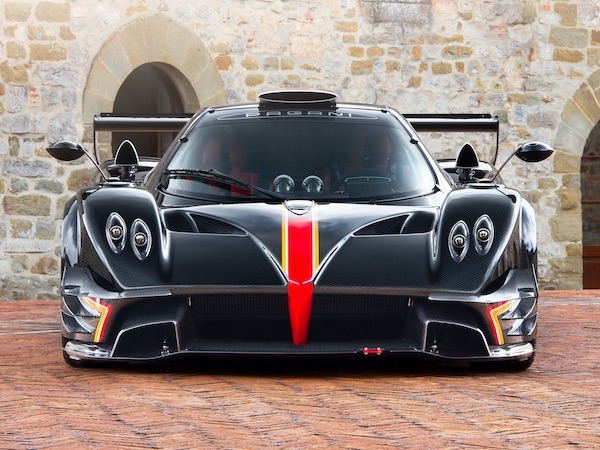 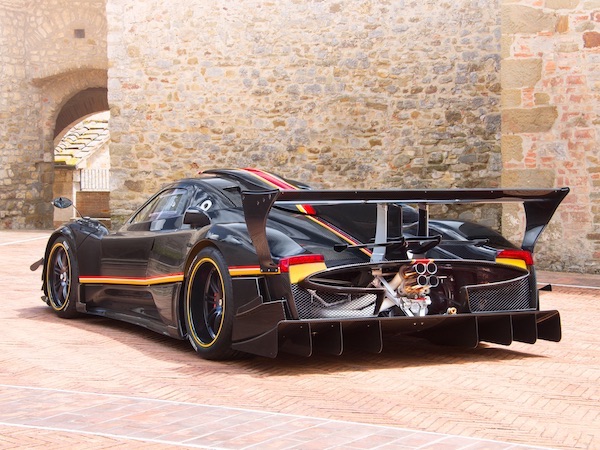 Zonda HP Barchetta is another magnificent creation from Pagani, released in 2017 in the USA. It was dedicated for two occasions: H. Pagani's 60th anniversary and the 18th birthday of Zonda model. The vehicle has an entirely custom bodywork and rear wheel covers. The rear spoiler, air intakes, and tail lights are borrowed from Pagani 760 series' models. Also, seats and chassis come from Huayra BC. The inner part of the rims are of a different colour - rims on the left side are golden, whereas on the right side they are blue. 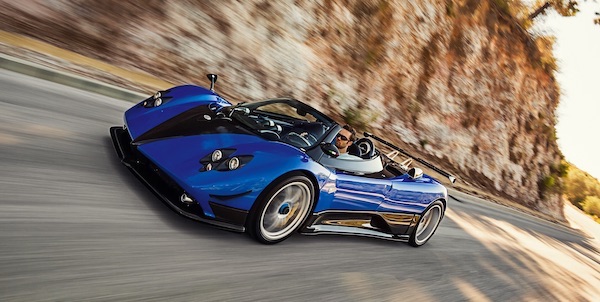 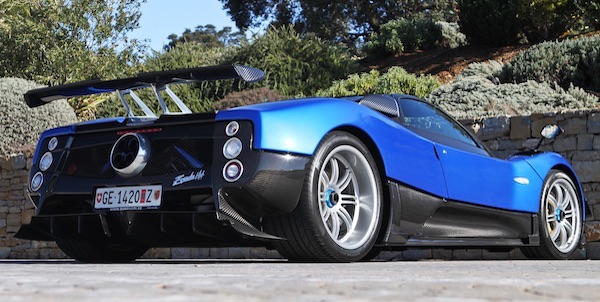 The engine that powers the car is 7,3-liter Mercedes-Benz V12 motor, generating 790 HP and 850 Nm torque. It is the most potent Zonda model to date. It is also limited edition - there are only three models in existence. It is said that Zonda HP Barchetta is the most expensive Pagani model ever. Its price reaches 15-18 million US dollars. Worth noting that only two models were intended for selling. The third one went straight to the H. Pagani personal car collection. 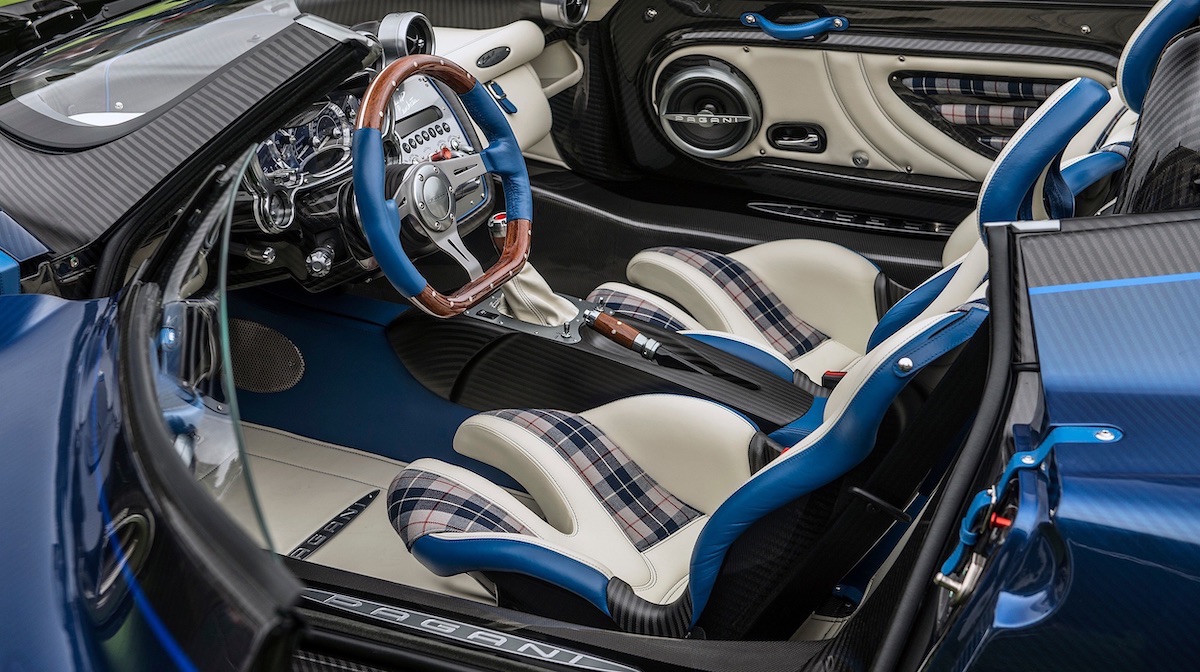 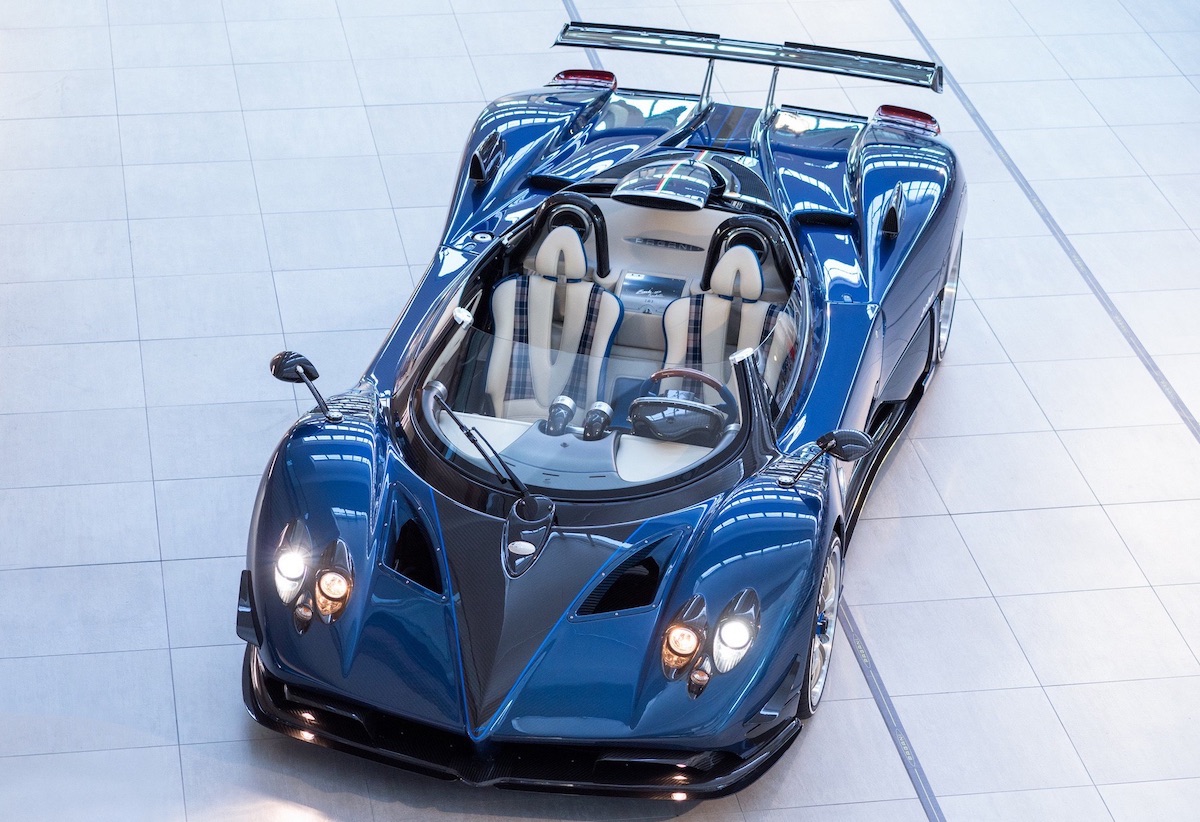 This model also marks the end of Zonda era. Despite that, Pagani could make another Zonda if clients would order it. The company has built a couple of such cars in recent years. For example, the Monza version released in 2004 was made for an artist King Moka, Uno model went into the garage of Sheikh Abdullah bin Nasser Al-Thani, the member of Qatar royal family. By the way, the sheikh's family is also in possession of a Zonda 750 model that was featured in a Hollywood movie Need for Speed: Hot Pursuit. This model is also known as Zonda 760 La Nonna. The HH version went to the hands of the Danish coder, David Heinemeier Hansson. Zonda Absolute was sent to Hong Kong, and PS, which was repainted in white and decorated with yellow stripes on the sides, went to the car collector Peter Saywell (and was wrecked in Great Britain in 2017). Zonda GJ's owner was the Scottish businessman Gareth Jones after his Zonda S crashed in an accident.

Pagani also made 760 model series exclusively for select clients - the most powerful version that could drive on public roads.