Fangio: A Racing Legend With an Extremely Valuable Name

These days, success in motorsport depends on more than the driver's skills – your technical capacity, team and wallet also have a huge impact. This was always the case, but the proportions half a century ago were a bit different – the final result was still largely determined by the driver's expertise.

Today, a driver's skills still have a significant impact on the final result (as the huge point difference between Ferrari teammates Sebastian Vettel and Kimi Raikkonen illustrates), but they aren't worth beans without a fast car, as is being proven by Fernando Alonso, who believed in Honda's potential and is now fumbling for the key to unlock that potential as he watches the leaders move farther and farther away on every lap.

In the first years of Formula One racing, there was one driver who was seemingly unaffected by a change of teams. This is Juan Manuel Fangio, whose record of World Championship titles (five) stood for 47 years before being surpassed by Michael Schumacher; however, his other records will probably never be broken. The Argentinian won his F1 Championship titles with four different teams (Alfa Romeo, Ferrari, Maserati and Mercedes-Benz), and he won almost every other race that he entered – 24 of 52 (46.15%). He also won the Argentine Grand Prix four times, and this record is practically impossible to beat since this circuit is no longer part of the F1 championship. 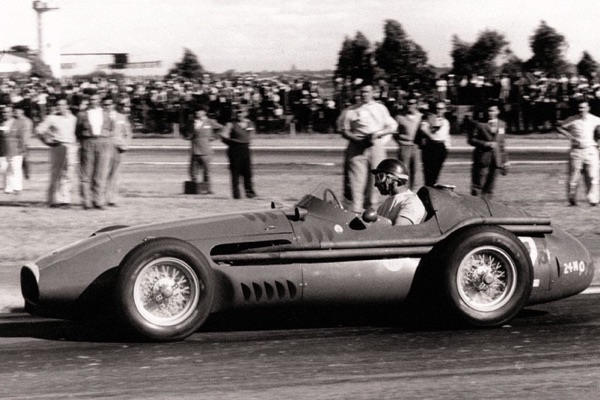 So who was this person who used to turn into an alien behind the wheel of a sports car?

Like many Argentinians, Juan Manuel Fangio Déramo (his full name) descended from Europe: his parents emigrated from Italy at the end of the 19th century. Born in 1911, Fangio was interested in football, and after discovering auto mechanics as a teenager, he abandoned his studies to pursue it further. Meanwhile, his penchant for driving came to light... in the army. 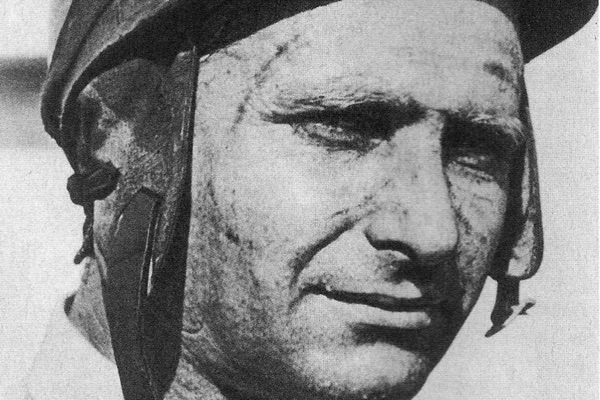 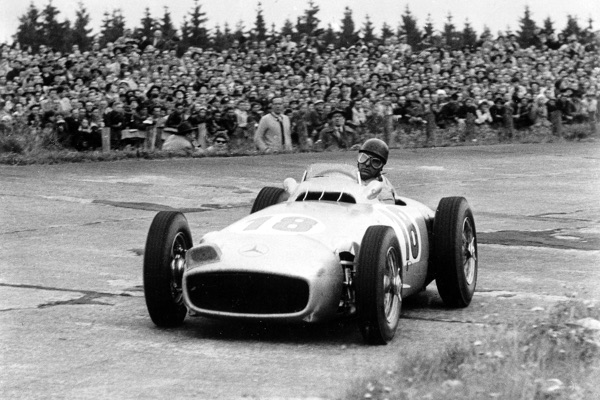 Car races in Argentina differed from their European counterparts in their duration: many of them lasted several days and covered thousands of kilometres – for example, in 1940 Fangio won the Gran Premio del Norte, which was almost 10,000 kilometres long and lasted two weeks. The race started in Buenos Aires and ran up through the Andes to Lima and back again.

Fangio's achievements didn't go unnoticed – he became the Argentine champion a couple of times and, and despite taking a few year off from active racing, he was sent to Europe in 1948. He was supported by the Argentine Automobile Club and the Argentine government, which was able to allocate some funding for the perspective racer. 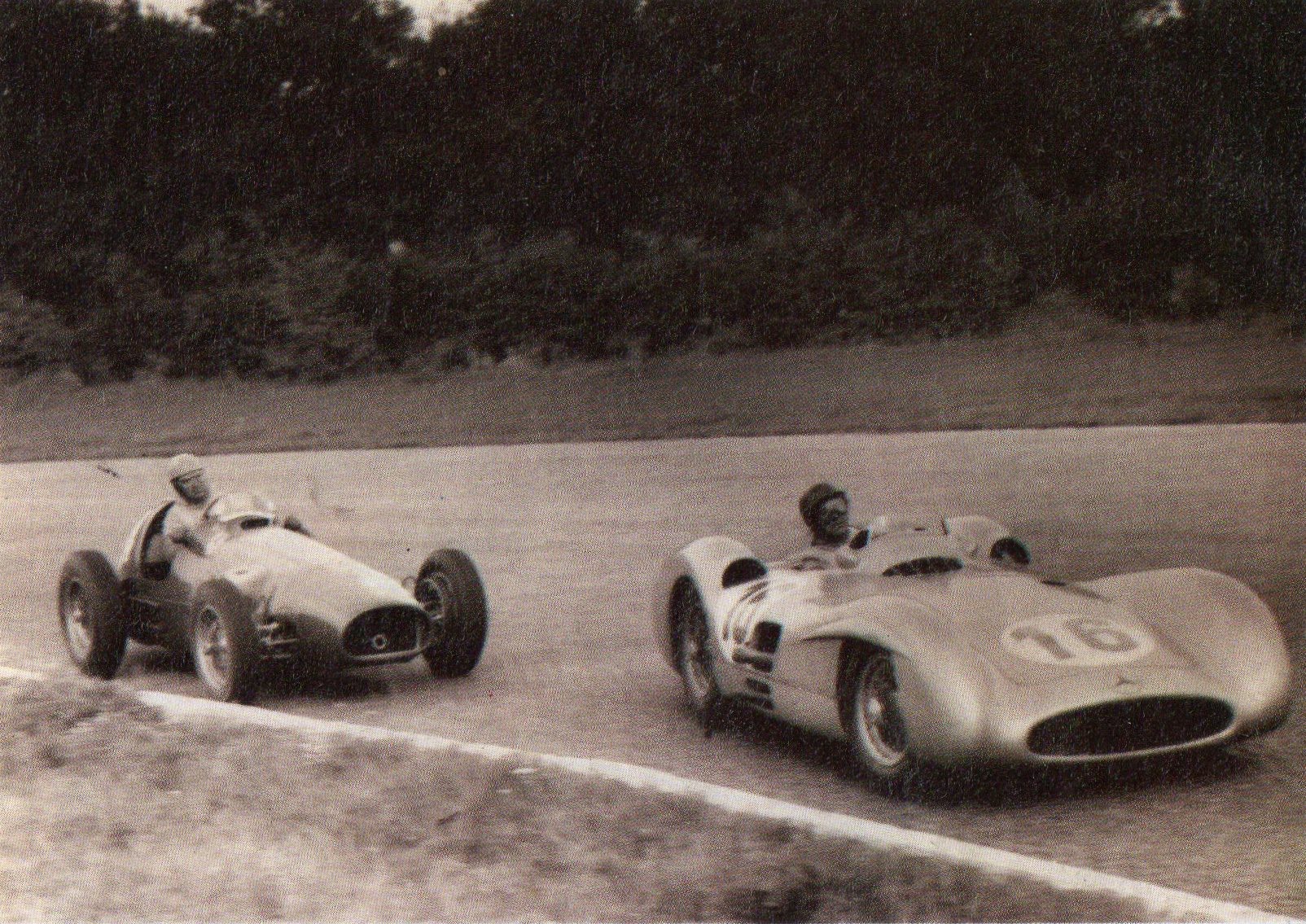 Fangio being chased by Alberto Ascari during the 1954 Italian Grand Prix
© Wikipedia.org

Making his debut in F1 in the 1950s, Fangio was old enough to be the father of many of the drivers – after all, he was almost 40 during his first year. This wasn't a problem for the Argentinian: he finished second in the championship, only being beat by his Alfa Romeo teammate Giuseppe Farina, and in 1951 he took the title.

In 1952, the World Championship regulations changed, so the Alfa Romeo team was unable to use its supercharged Alfettas and was forced to withdraw, leaving the defending champion without a car. In the middle of the season, Fangio tried to get on the Maserati team, but he had a terrible crash in his very first race and missed the rest of the season due to injuries. Fangio had arrived at the track just half an hour before the start – he had missed his flight and decided to drive from Paris to Monza through the night, leaving him badly fatigued for the race.

This didn't discourage Maserati – they signed Fangio for the 1953 season, where the Argentinian finished second. After bringing the team two victories at the beginning of 1954, Fangio moved to the Daimler-Benz team after three rounds and brought them the championship title; he repeated this accomplishment in 1955 as well. 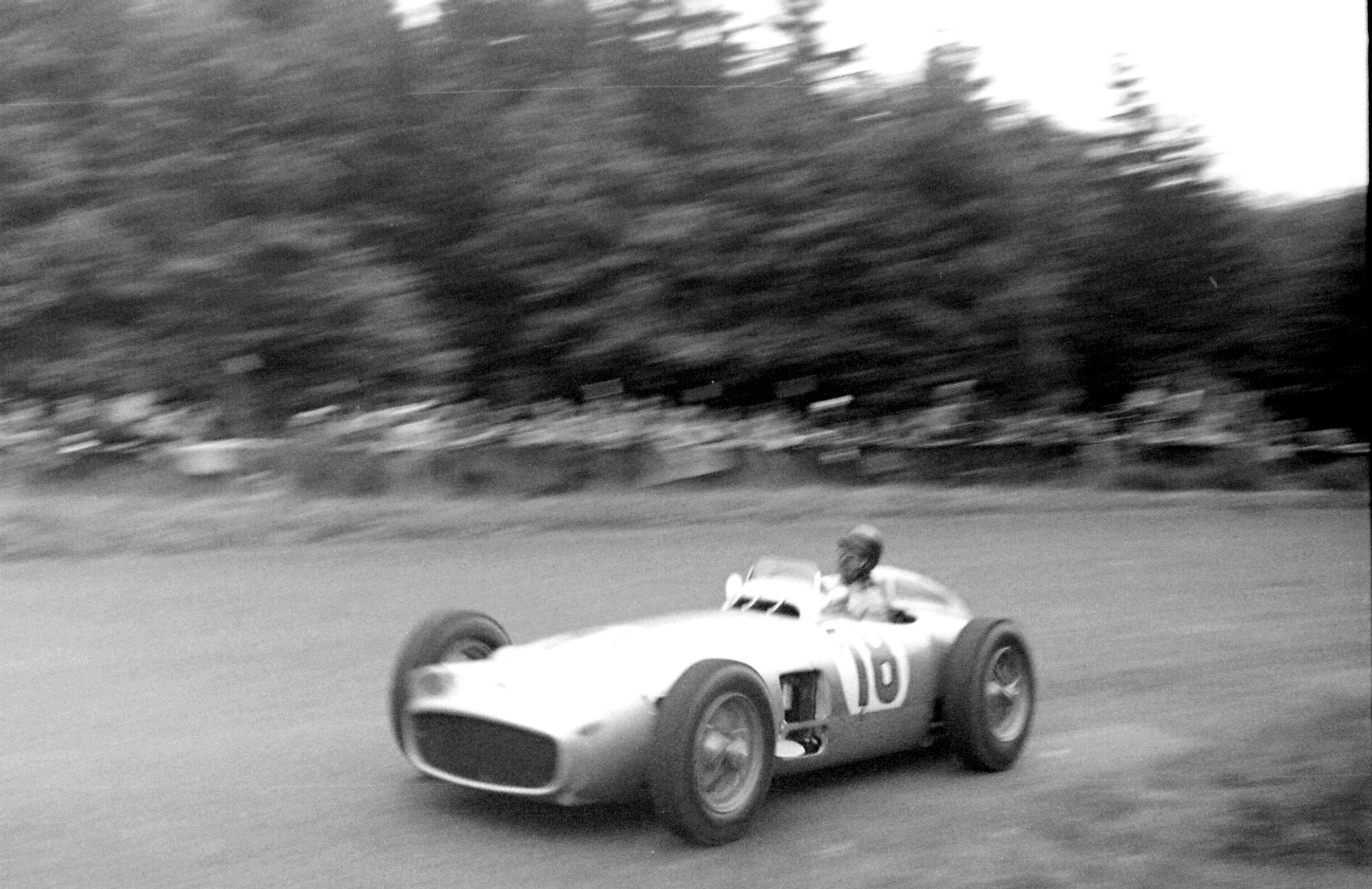 In 1956 he drove for Ferrari and brought this team the championship title. He returned to Maserati in 1957, and after winning four out of seven races (finishing second in two and not finishing in one), he became the F1 champion with his third Italian team.

Fangio's last F1 victory, which was at the German Grand Prix, was the ultimate for both him and Maserati. After starting in pole position, Fangio took a pit stop in the middle of the race to change his tyres and refuel, while his main rivals drove non-stop. 60 years ago, F1 pit stops took a bit longer than they do today, so Fangio went in with a 30-second lead and came back out of the pits 50 seconds behind Peter Collins, who was then up front. Nailing one fastest lap after another, Fangio caught up with the Ferrari, ultimately passing it and taking the win by three seconds.

I have never driven that quickly before in my life and I don't think I will ever be able to do it again, said Fangio after his win.

And he was right: after the 1957 German Grand Prix, Fangio never took another F1 victory, and eventually retired from the prestigious competition in 1958.

The year 1958 also marks an odd moment in Fangio's life: the Argentinian was kidnapped before a race in Cuba. Fangio was held by activists from Fidel Castro's 26th of July Movement for 29 hours; he missed the race, but he ended up practically befriending his captors (they say he developed a case of Stockholm Syndrome) and became a sympathiser of the Cuban revolutionaries.

In the course of his career, Fangio also partook in both the Indianapolis 500 and the 24 Hours of Le Mans, but his achievements there pale in comparison to Formula One.

Fangio died from illness in 1995, at the age of 84, but only after being inducted into the International Motorsports Hall of Fame, opening a museum named after him in his home town of Balcarce, and seeing sculptures of himself in several Argentine cities.

The Argentinian was best summed up by the words of Michael Schumacher when asked to compare his championship titles with those of Fangio: "Fangio is on a level much higher than I see myself. <...>. You can't take a personality like Fangio and compare him with what has happened today. There is not even the slightest comparison."

Today, Fangio is known not only as a great race driver, but also as a person who added value to the cars he drove. For example, the Mercedes-Benz W196 that Fangio drove in 1954 was sold at the 2013 Goodwood Festival of Speed auction for what was then a record amount – GBP 19.6 million (approximately USD 29.6 million). The car had not been touched since the very end of the 1954 season, which increased its value even more.