1967 was a special year for the world. From one pole to the other, everyone who had gotten space fever was building space ships, making their way into the universe, signing contracts for the conquest of space outside of Earth's boundaries, and all the while – giving each other dirty looks, because everyone wanted to be the first to leave their footprint in space.

Japan's Mazda was no exception. It was that year that they released the Mazda Cosmo, which was the company's first car with a rotary engine, sometimes also known as the Wankel engine (after Felix Wankel, its inventor). With the name of what became the company's signature model of that time, Mazda paid tribute to the cosmos that was making headlines around the world, and also emphasized that the future belongs to rotary engines.

A sporty prototype was introduced in 1964 at the Tokyo Motor Show. The concept car made its debut after the NSU Spider – the first Western car with the same Wankel engine – was shown at the Frankfurt Motor Show. A total of 80 prototype models were released between 1965 and 1966.

Mass production began in 1967 and lasted through 1972. The first brochures were not exactly humble: “Judged on the basis of engine size, weight and cost, the 110S accelerates faster and goes faster than any other car in the world.” The Cosmo could accelerate to approximately 100 km/h in about nine seconds. The models intended for export were called the 110S.

Five years of production would be enough to build thousands of modern-day cars, by the Cosmos was assembled by hand, so only about one coupé left the factory per day. To calculate exactly – 1,519 first-generation models with the codes L10A and L10B were released in all. 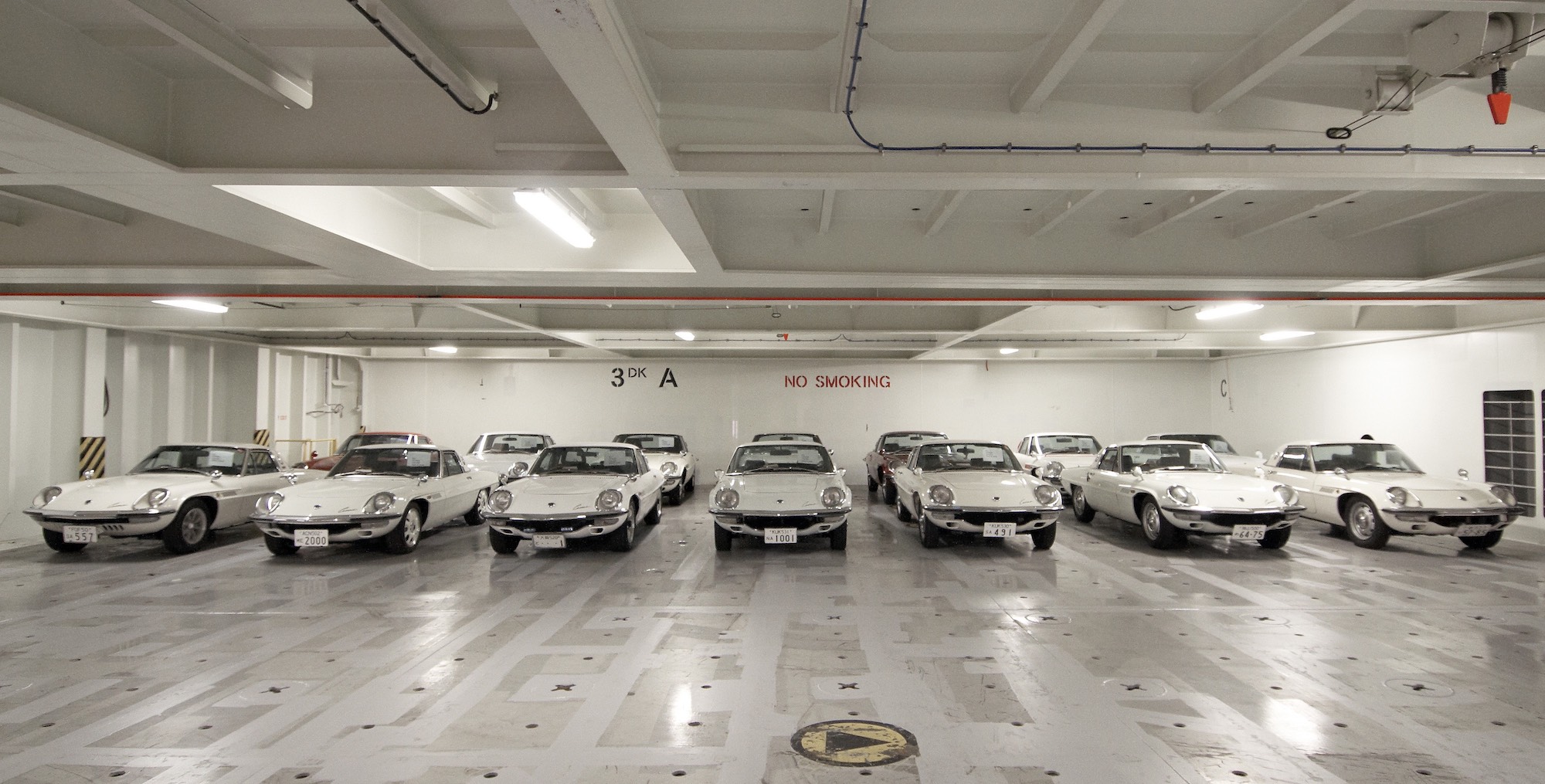 The L10A models had a two-rotor, 110-hp, 1-litre engine. The latter was especially suited for the Japanese, because by purchasing the Cosmo with a rotary engine, they could have more power than equivalent conventional engines generate without having to pay taxes for higher capacity engines.

The Cosmos coded as L10A are also called Series I models, and by 1968, only 343 were produced. For a car in relatively good condition, you would have to pay about USD 140,000, although, for example, one white coupé in mint condition was sold for USD 264,000 at a Gooding & Company auction. The asking price at auctions for a Cosmo that needs to be restored is USD 60,000–70,000. And the majority of sellers are from the Far East. 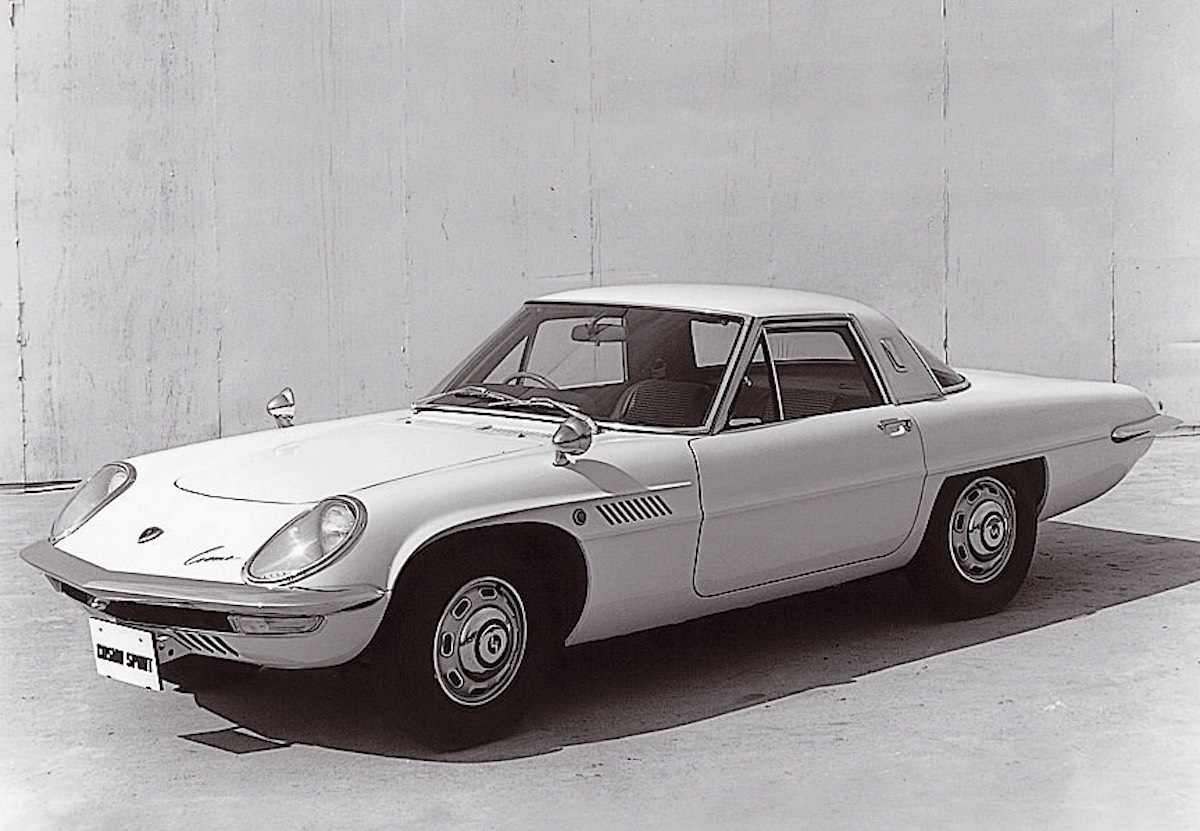 The Series II (L10B) got a more powerful 128-hp engine and a five-speed manual transmission (the previous model had a four-speed automatic). The wheelbase was expanded by 38 cm for more room. This Cosmo could break the 190 km/h barrier, and was a few seconds faster than its predecessor in drag races.

In order to prove the reliability of the rotary coupé, Mazda decided to participate in the 1968 Marathon de la Route at the Nürburgring circuit in Germany. Two Cosmo models were at the start line of the 84-hour race. With just a couple of hours left until the finish, the Cosmo with the Japanese team was forced to retire; meanwhile, the other car driven by Belgians completed the race in fourth. 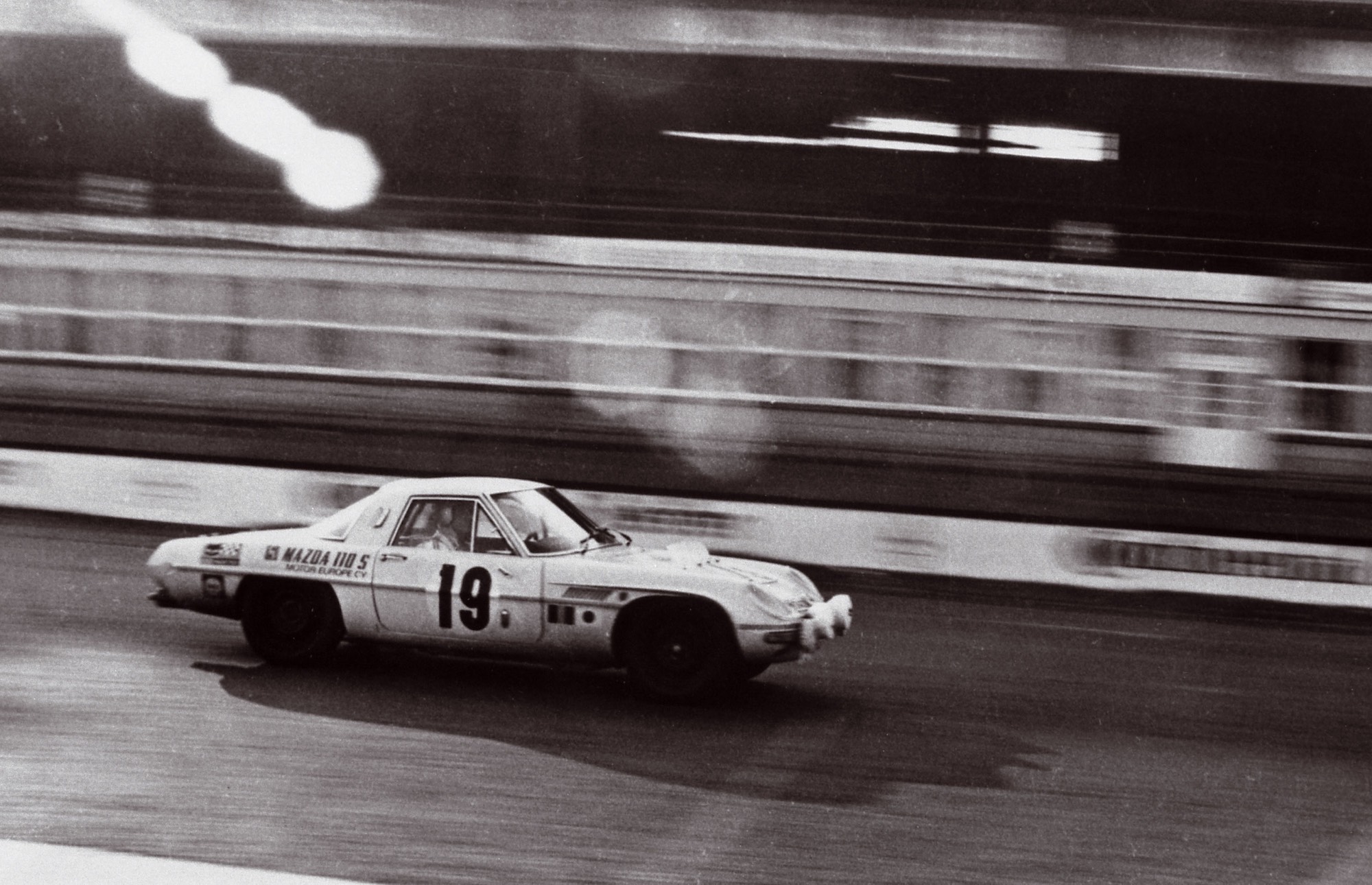 Race drivers weren't the only ones who liked the sporty model. Stand-up comedian and talk show host Jay Leno owns a 1970 L10B. The American Speed Channel dedicated a separate episode of the My Classic Car series to this car in 2006. At the time, it was believed to be the only remaining Cosmo in the United States.

However, Mazda's US division managed to find another Cosmo in 2007 and purchase it. Jay Leno called his car very special, but "ahead of its time".

It should be pointed out that Cosmos were not sold outside of Japan, so Western restorers might have a tough time finding parts. Some parts can still be purchased at Mazda dealerships, and many are up for sale at Japanese car auctions, but obviously – they are not cheap. 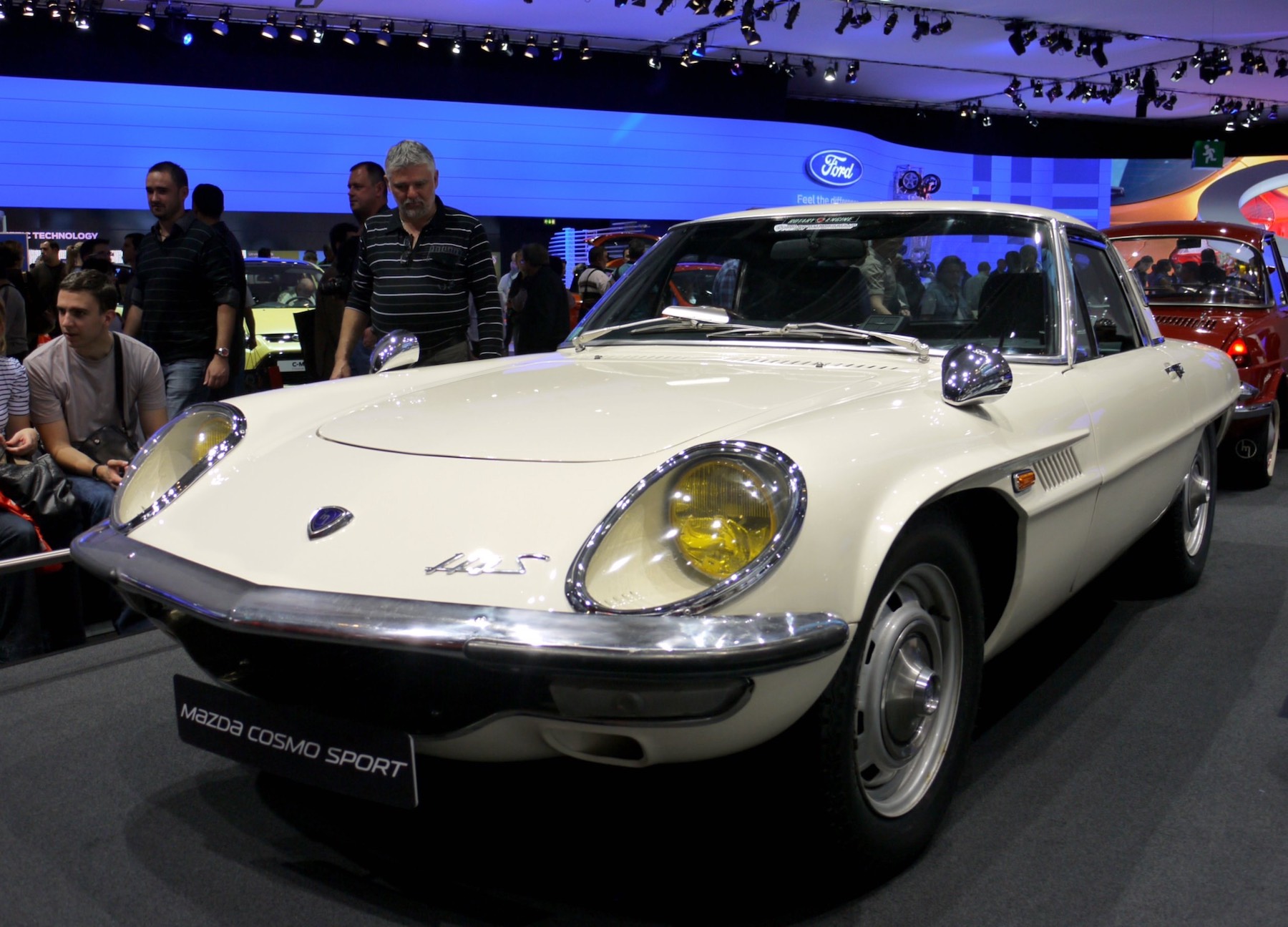 The second-generation Cosmo (the CD Series) was produced from 1975 to 1981. In the West, the rotary model was known as the RX-5, while the versions with standard engines were called the Mazda 121; in Japan, it was tagged as the AP (Anti-Pollution), meaning that it was a relatively environmentally friendly model. This Cosmo was an enormous success in Japan, where over 50,000 cars were sold in the first year alone. Export markets behaved differently, where buyers turned up their noses to the RX-5. Finding a Cosmo of this generation in the West is difficult, since back then, everyone was waiting for cheaper, lighter cars. For example, just 35,000 Mazda models were sold in 1976, of which only a few were Cosmos. 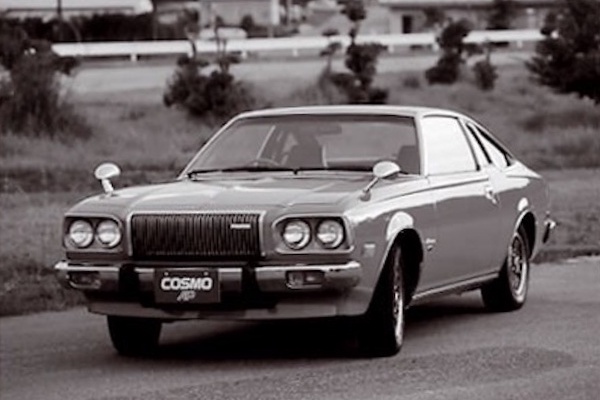 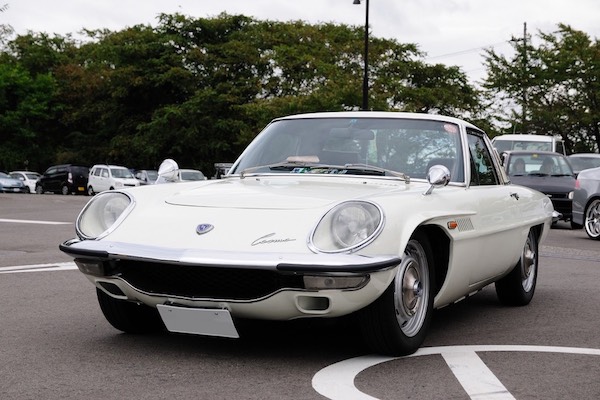 Together with the second generation, Mazda's rotary models lost the Cosmo name in Western markets. The latter was left for the local Japanese market. Thus, the third-generation Cosmo marked with the HB code and produced in 1981–1989 had twin brothers: the 929 and the Luce. In addition, the HB series was the only one in the world where buyers had a choice of gasoline, diesel or rotary engines.

Mazda made three different rotary engines for HB models: the 12A, the 12A-turbo and the 13A. The latter was only available with automatic transmission; meanwhile, the 1982 12A-turbo Cosmo was the fastest production car sold in Japan until being overtaken by the Nissan R30 Skyline RS. 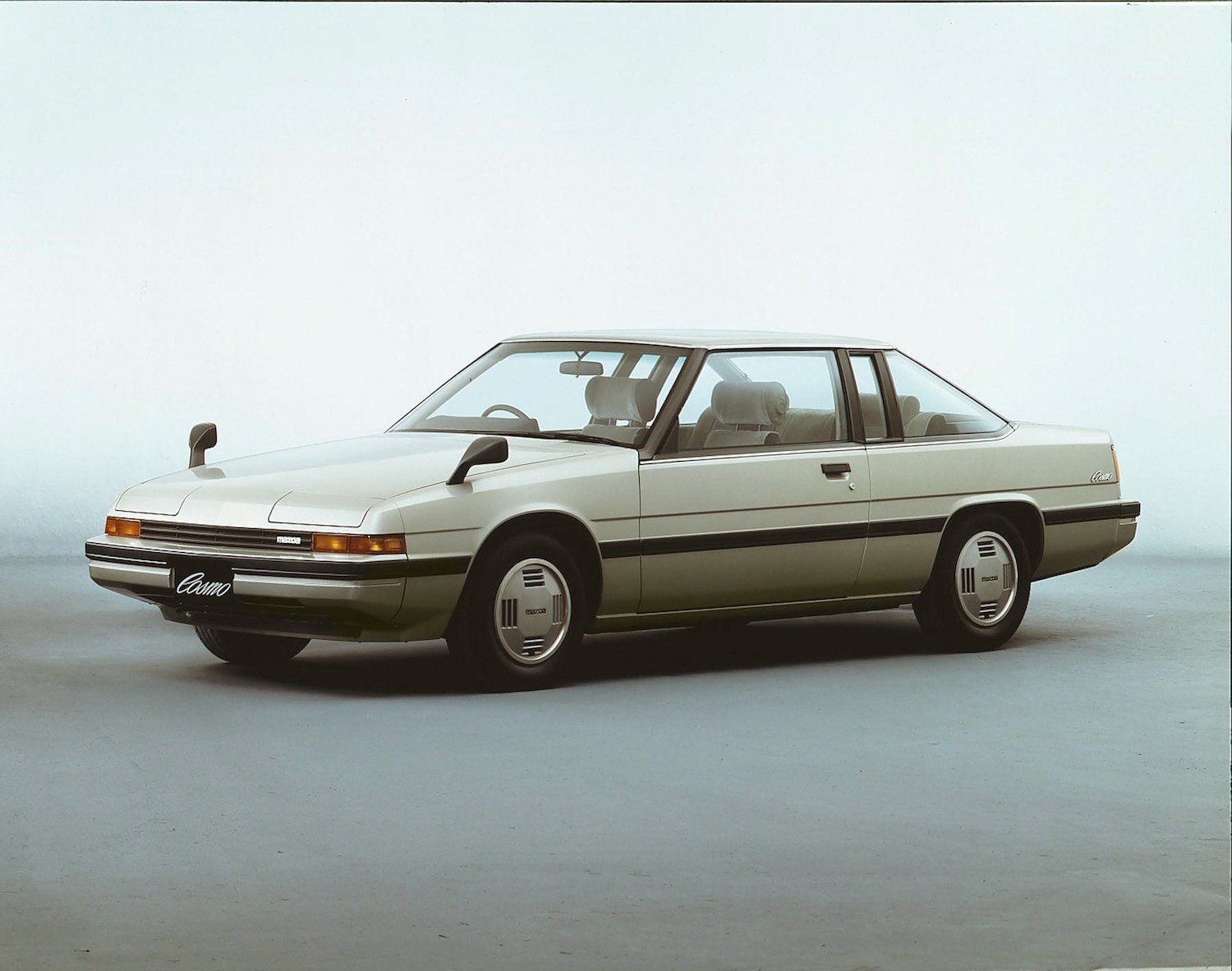 Starting in 1990, the manufacturer added the word "Eunos" to the Cosmo name – this was how the Mazda Auto dealership network where it was possible to purchase Eunos Cosmo models was renamed. The four-seat (2+2) JC series coupé was offered as a luxury car with a triple-rotor engine and was only available with a four-speed automatic transmission.

The Japanese didn't like the Eunos Cosmo – it didn't comply with the Japanese Government dimension regulations, so its owners had to pay higher taxes. 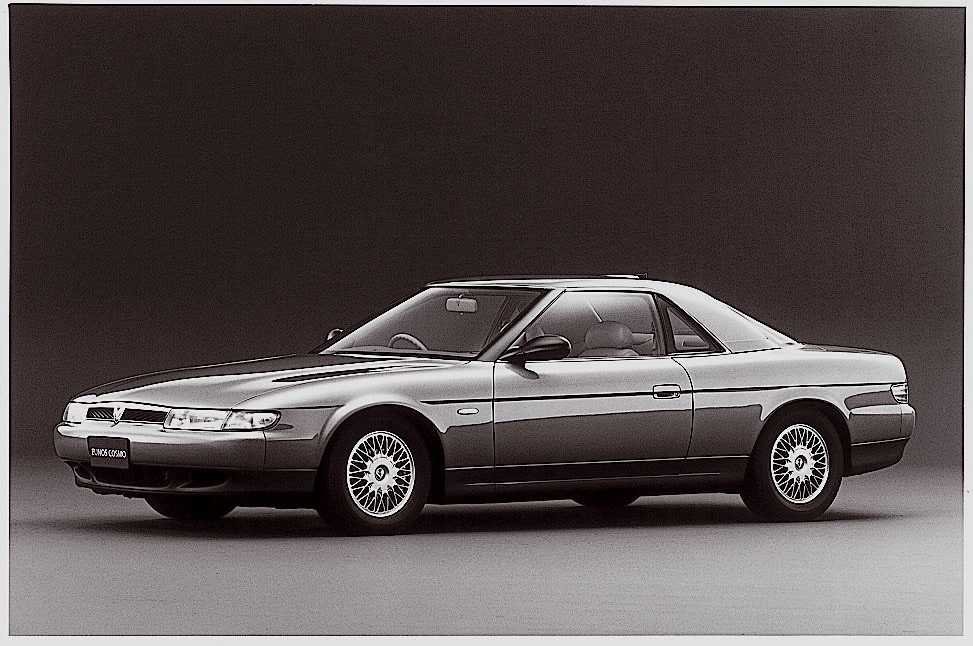 Mazda offered two different rotary engines: one with a twin turbo, and the other with two litres of displacement and 300 horsepower. With this last Cosmo generation that was produced until 1996, Mazda set several "firsts". For the first time in automotive history, the Japanese offered twin sequential turbo systems for a rotary engine. It was the first time a production car got a built-in GPS navigation system. And it was the first time that the PALMNET data communication system was used in Japan for ECU-to-ECAT.

By 1995, Mazda had only produced 8,875 Cosmo Eunos coupés. Fewer of these had the 2-litre rotary engine, so models with this particular powerplant are rarer and more valuable. Since it was decided not to produce this version for export markets, the Eunos Cosmo was only imported to places with left-hand traffic. Today you would have to pay about USD 15,000 for the last Cosmo model with a 2-litre rotary engine, but it is worth noting that just 3,000 Cosmos with this engine were released.