The BMW i8 Coupe and BMW i8 Roadster - Is BMW’s Green and Clean Hybrid Sports Car a Modern Classic?


At the end of April 2020, BMW ended production of its iconic hybrid i8 sports car after six years.

A trailblazer in many ways, the BMW i8 combined the traditional BMW driving experience with the aerodynamically-efficient design of a 2+2 sports car, pioneering hybrid technologies, and groundbreaking greentech production methods.

In this piece - co-authored with the BMW experts from Hexagon Classics of London - Dyler.com takes a look at the history of the i8 and considers whether BMW’s sports hybrid will be considered a modern classic car.

From Hybrid Concept to Hybrid Reality


The BMW i8 started life at the 2009 Frankfurt Motorshow as the BMW Vision EfficientDynamics concept car.

Blending innovative efficiency with the performance of one of the Munich manufacturer’s powerful M Cars, this aesthetically compelling BMW concept car captured the attention of everyone who saw it. Its striking aerodynamics combined with a layered design effect opened up a fascinating glimpse into the future of ultra-sleek, highly aero-efficient automobiles.

The BMW Vision EfficientDynamics stood out as an automotive tour de force in terms of interior and exterior automotive design, and many components of the vehicle were visible as the BMW sought to showcase the virtues lightweight technologies.

The chassis and suspension of the BMW Vision EfficientDynamics were made completely of aluminium, whilst the outer skin on the doors were made almost completely of a special polycarbonate glass, which darkened as when light shone upon the car. 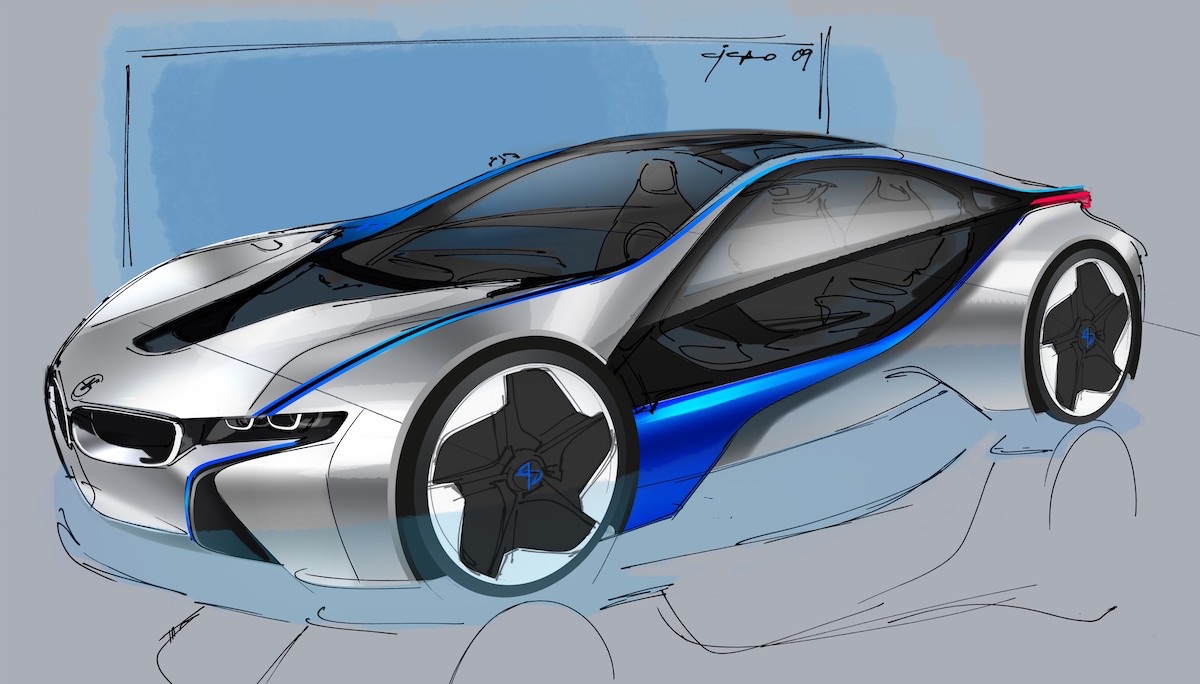 Depending on driving conditions, the two electric motors could be used both for acceleration and regenerating energy when applying the brakes. This principle ensured efficient energy management, whilst the charge status of the car’s lithium-polymer battery would remain within its optimum range.

The result was a fuel consumption of just 3.76 L/100km (EU test cycle) and CO2 emissions of 99g/km. Fast-forward two years, and the car had evolved into the BMW i8 Concept, which appeared at the 2011 Frankfurt Motor Show. The 2011 car was much closer to the production version and a petrol engine had replaced the original concept’s diesel motor.

However, it would still take another three years of perfection until the BMW i8 was ready to roll off the production line. BMW began accepting orders for the futuristic i8 in Autumn 2013 and both the car hit the market the following year.

The BMW i8 arrived to critical acclaim and its impressive headline figures included acceleration from 0-62 mph in 4.4 seconds, a limited top-speed of 155 mph, 357 bhp and thanks to its intelligent hybrid powertrain, and a remarkable 135mpg.

Its combination of performance, cutting-edge technology, and concept car looks meant that this intriguing 1.5 litre, three-cylinder petrol engined 2+2 hybrid sports hybrid tugged at the heartstrings of even the most ardent petrolheads.


Hexagon Classics of London was established in 1963 and offers enthusiasts seeking an automotive investment a large array of both classic and modern classic cars to choose from.

To assess the potential of the BMW i8 Coupe and BMW i8 Roadster becoming a modern classic, they have gone through the criteria of what makes a car fall into this category. 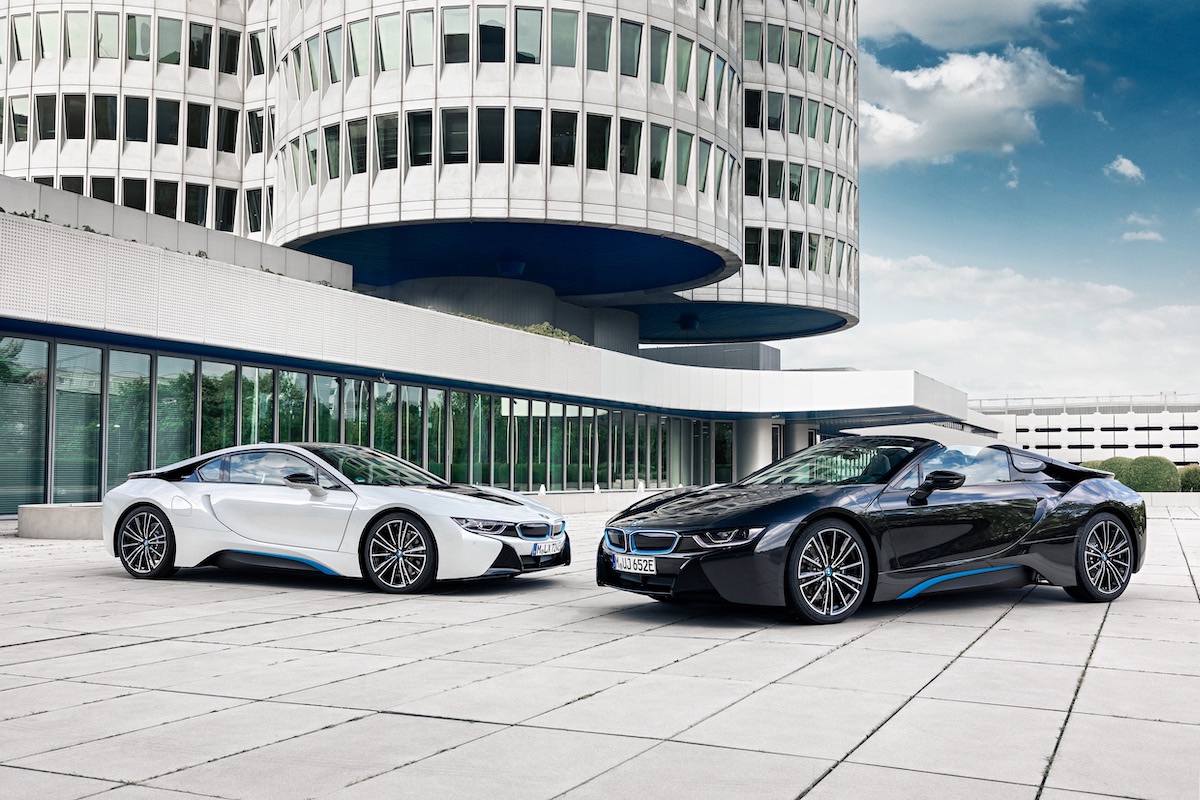 Whilst it is worth remembering a modern classic can be considered a collectible regardless of its age, its definition remains a subjective one and is a matter of opinion.

A good starting point to determine the potential future value of a vehicle surrounds the rarity of it. Thanks to advances in modern technology coupled with the DVLA records, it is possible to quantify the number of examples of specific cars that are still on the road today, alongside the original number of models produced and the time period during which they were manufactured.

A car’s exclusivity by looking at the examples below:

Whilst exact production numbers for the i8 have not been confirmed, BMW built the 20,000th i8 in December 2019, prompting the Bavarian manufacturer to claim that the i8 is the best-selling hybrid sports car of all time.

With production having ended in April 2020, it’s pretty safe to assume that production numbers will not much exceed the 20,000 mark. The limited edition models of the BMW i8 Coupe and BMW i8 Roadster add further exclusivity to what was already a rare car and are likely to become even more desirable amongst modern classic car enthusiasts with time. 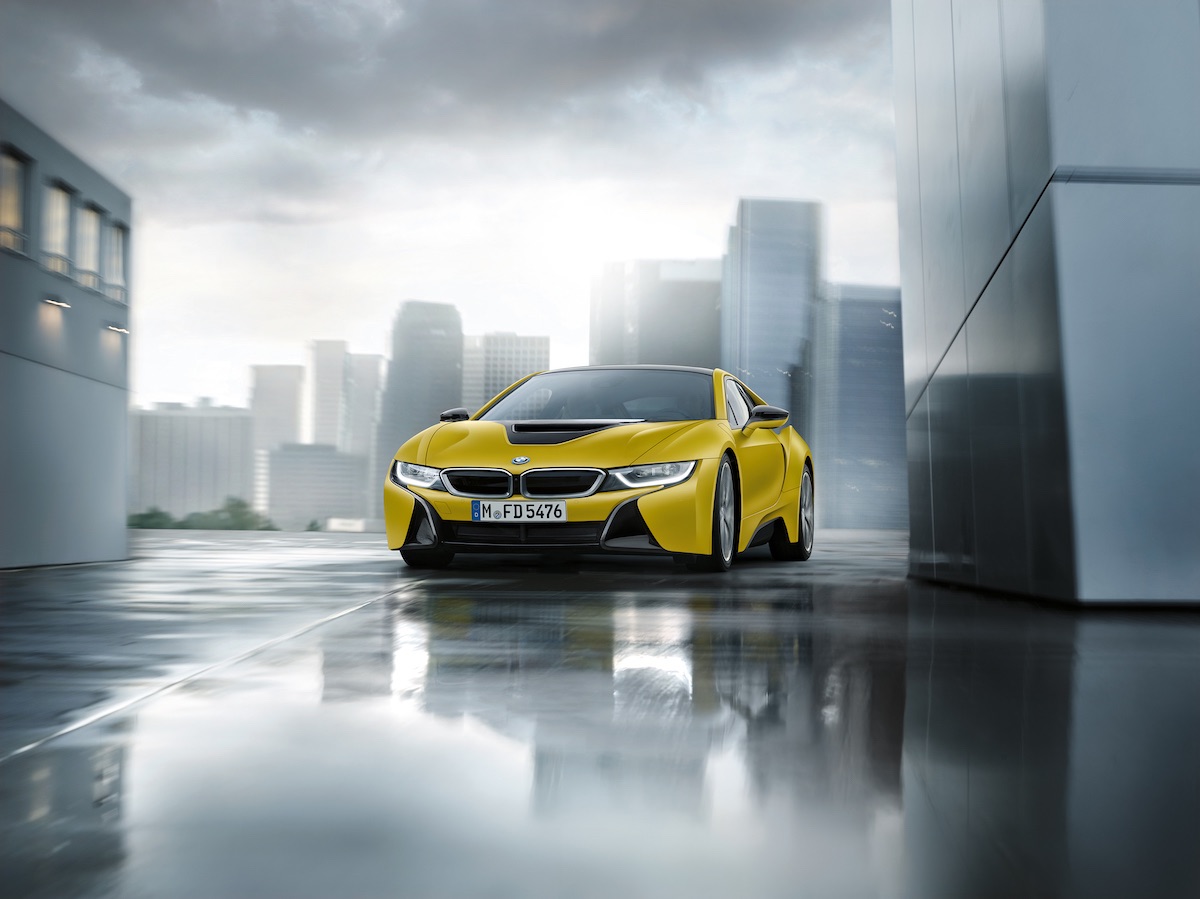 As BMW concluded its chapter on the i8, one last special edition was created and its Leipzig plant is currently producing 200 of the limited edition Ultimate Sophisto Edition model.

Looking through BMW’s back catalogue, the sales figures for the i8 are well ahead of other sporting classics from its history - only 399 units of the iconic BMW M1 were produced for homologation purposes, whilst only 5,000 of the retro BMW Z8 roadster from the late 1990s were built.

With the BMW i8 now consigned to history, what is certain is that its existence forged the hybrid sports car niche and the BMW i8 Coupe and Roadster have certainly secured their place amongst BMW’s greatest hits.

What to Look For When Buying


It will come as no surprise that a well-cared for low-mileage i8 will come with a high price tag. With a six-figure price when new, the i8 is the kind of car that owners tend to look after. Even so, it’s worth checking the wheels for obvious scrapes and scratches. Look around the bodywork for damage - particularly around the doors, which require a lot of space to open - and ensure that the tyres are in good condition and have plenty of tread remaining. 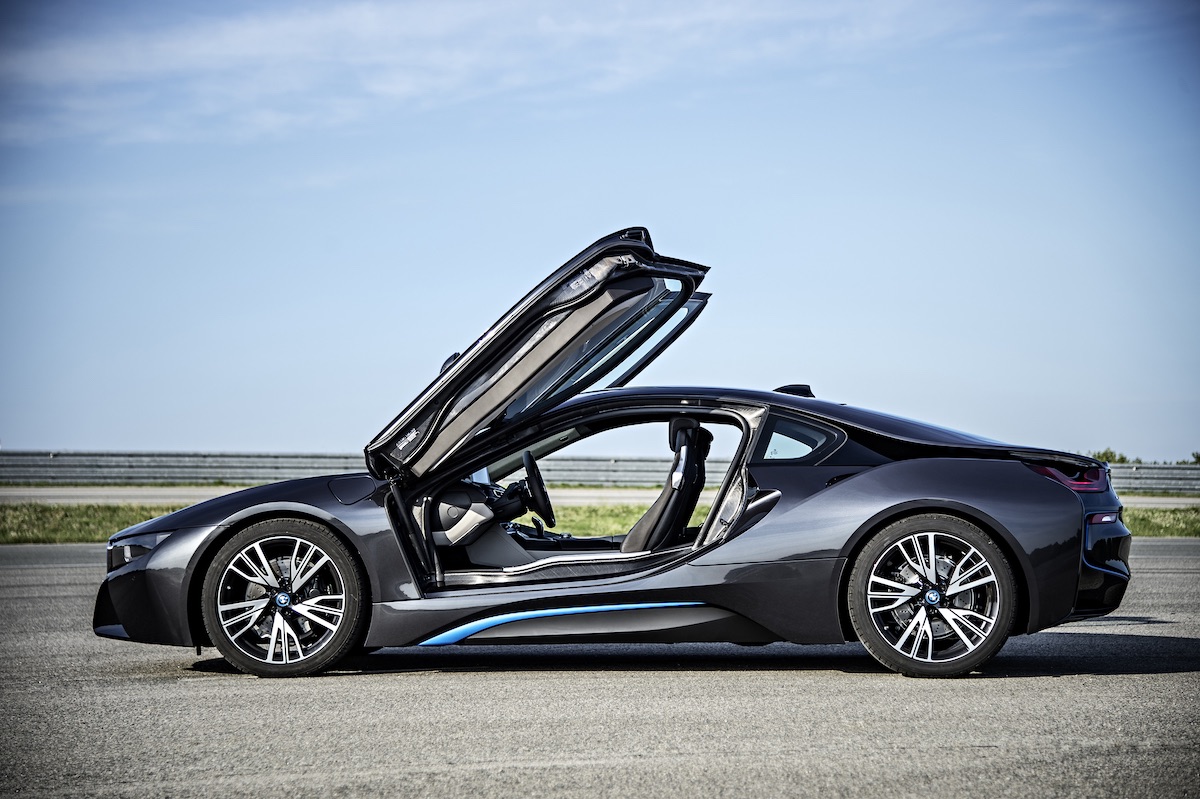 2018 Facelift and Other Updates


As a high-end sports car, BMW was not tight with the options list on the i8. There were a total of 20 options and six of these were paint jobs.

When the BMW i8 was given a mild facelift in 2018, BMW chose to focus on small tweaks to the body and mechanicals. Whilst the front-end, battery, and engine received minor upgrades, the BMW i8 has remained largely the same as it was since it launched.

On 2018 models onwards, the high-voltage storage battery of the BMW i8 Coupe and i8 Roadster had its cell capacity increased from 20 to 34 Ah and a gross energy content of 11.6 kWh. At the same time, optimized battery cell technology made it possible to increase the peak output of the electric motor by 9 kW/12 hp to 105 kW/143 hp.


The BMW i8 was a success because it represented a coming together of futuristic design and pioneering technologies, but the leading purpose of the i8 stretched far beyond incorporating BMW’s hybrid and electric eDrive technology into a sports car.

The BMW i8 was the world's first sports car to have been developed with sustainability in mind from the outset. The Munich manufacturer set new eco-friendly standards in the automotive industry when it created the LifeDrive architecture exclusive to its range of i8 and i3 models, as well as the plug-in hybrid system eDrive system that powered them.

The architecture’s passenger cell made of carbon fibre reinforced plastic (CFRP) combined with an aluminium chassis was a revolutionary step in car production, as was the intelligently- controlled interaction between the car’s regular internal combustion engine and its electric motors. 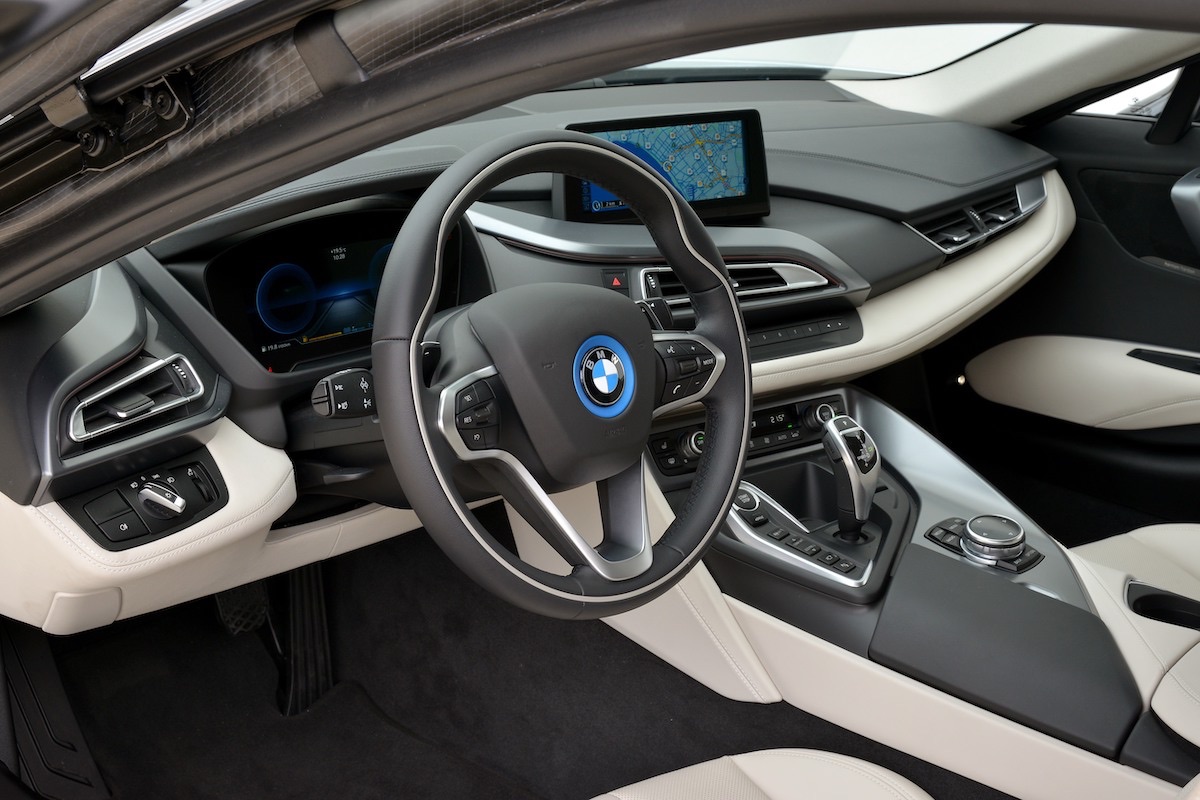 In terms of production methods, the leather used for the surfaces of the seats and instrument panel is tanned with an extract from olive tree leaves. Meanwhile, the base material for the textile materials is a polyester granulate, which comes from recycled PET.

Alongside the exceptionally-high proportion of recycled materials in its production, most of the aluminium used to build the BMW i8 is sourced from recycled metal and forged using regenerative energy.

The electricity required for the production of the BMW i8 Coupé and the BMW i8 Roadster at the manufacturer’s plant in Leipzig comes from four on-site wind turbines.

To further underline the i8’s green and clean credentials, the electricity required for the production of its carbon fibre panels at BMW’s in Moses Lake plant in the United States is 100% generated from hydropower.

Do They Deserve Iconic Status?


There is no clear way to define what makes a modern classic car. However, the awards that the BMW i8 won in its lifetime may go some way to helping it on its way

Each year between 2015 to 2019, the plug-in hybrid motor that powers the BMW i8 won at least one title at the world-renowned Engine of the Year Award. During its six-year lifespan, the BMW i8 also took class victory in the All-Wheel Drive Car of the Year survey and was chosen by Top Gear as its Car of the Year. Its innovative and pioneering design also saw it scoop iF Design and Red Dot awards. 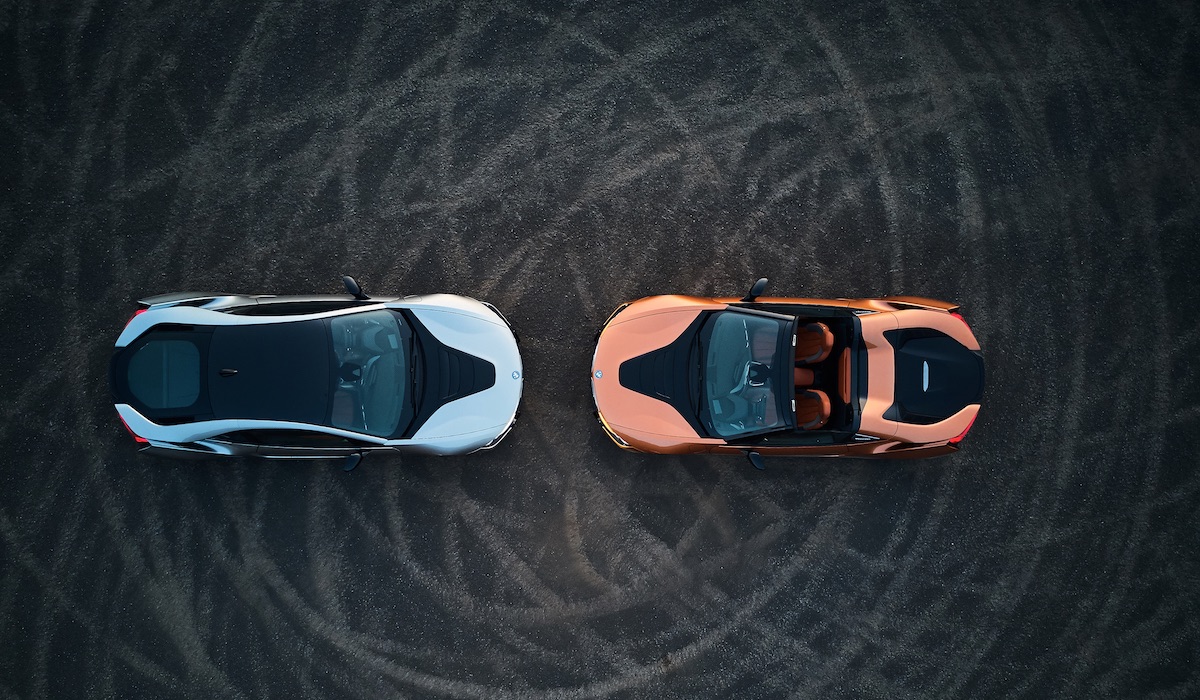 The big question: Will the BMW i8 Coupe (left) and BMW i8 Roadster be remembered as future classics?
© BMW

As the BMW i8 takes its final bow, its amalgamation of aesthetics and technical prowess will see it remembered as the car that set out the foundations for BMW’s range of plug-in hybrids

When launched in 2014, leading German car magazine Auto Bild Klassik declared the BMW i8 as a “classic of the future.” Looking through this car’s journey from the BMW Vision EfficientDynamics to pioneering hybrid sports car, they may well have called it right.