The 28-year-old Müller is one of the six Audi DTM drivers who are competing in the #RaceHome championship - an Esports category which was founded by fellow Audi DTM driver and 2013 DTM title champion and Le Mans 24 Hours winner, Mike Rockenfeller.

#RaceHome is an online charity championship organised to raise awareness and funds for freelancers in motorsport whose livelihoods have been affected by the global COVID-19 pandemic. All funds raised from the proceeds are then donated to motorsport-focused charities such as Mission Motorsport.

Those interested in taking part in #RaceHome can do so on Gran Turismo Sport for the PlayStation 4. 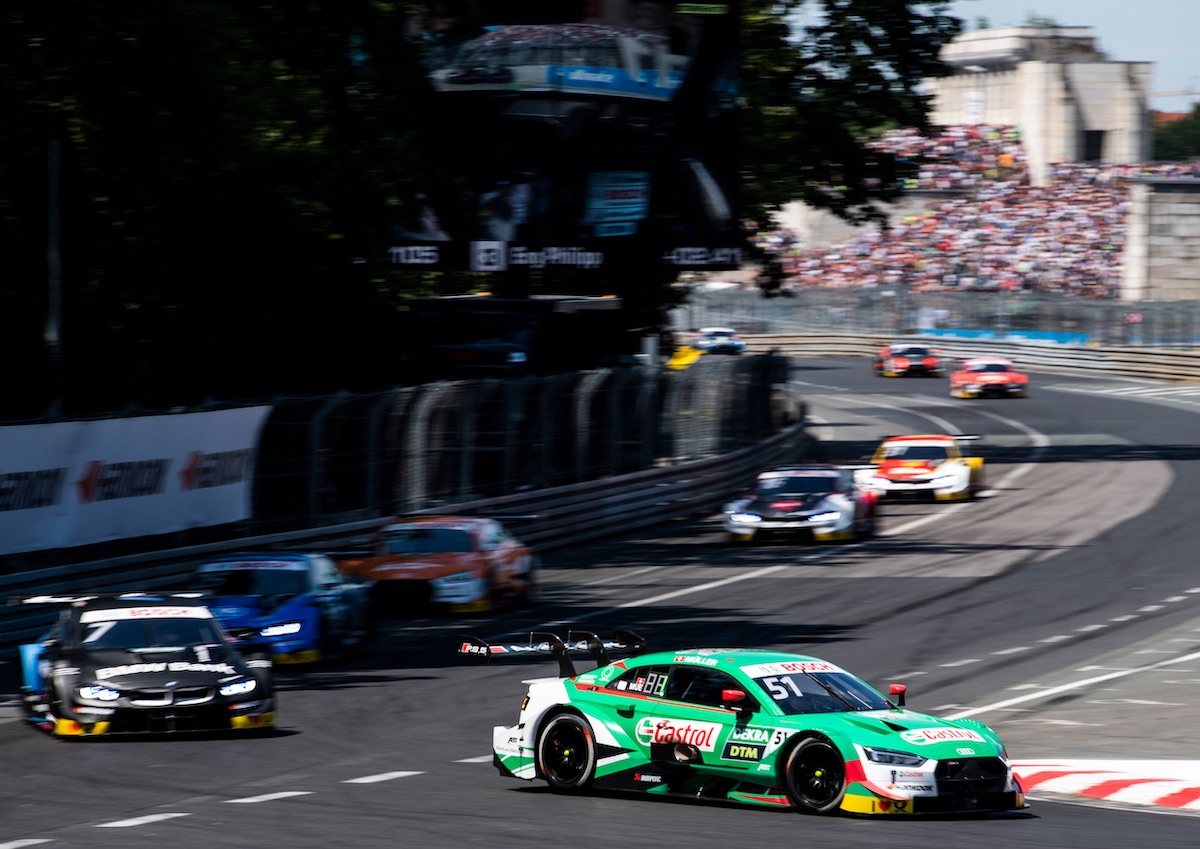 Nico Müller: “Sim Racing is a Great Way to Get Your Daily Dose of Racing and Hang Out Online”

The participating drivers then select the winning livery, and its creator will be invited to race alongside the Audi works squad in the next event on the #RaceHome calendar. Another way of involving Audi and DTM fans in the initiative is by allowing them to bid for a slot on the starting grid.

Müller, who finished runner-up to Rast last year is the current leader of the #RaceHome championship after three consecutive wins at Interlagos, Bathurst and on the famous Nürburgring-Nordschleife and two second places (most recently on a very wet Red Bull Ring) in the first eight rounds of the series. 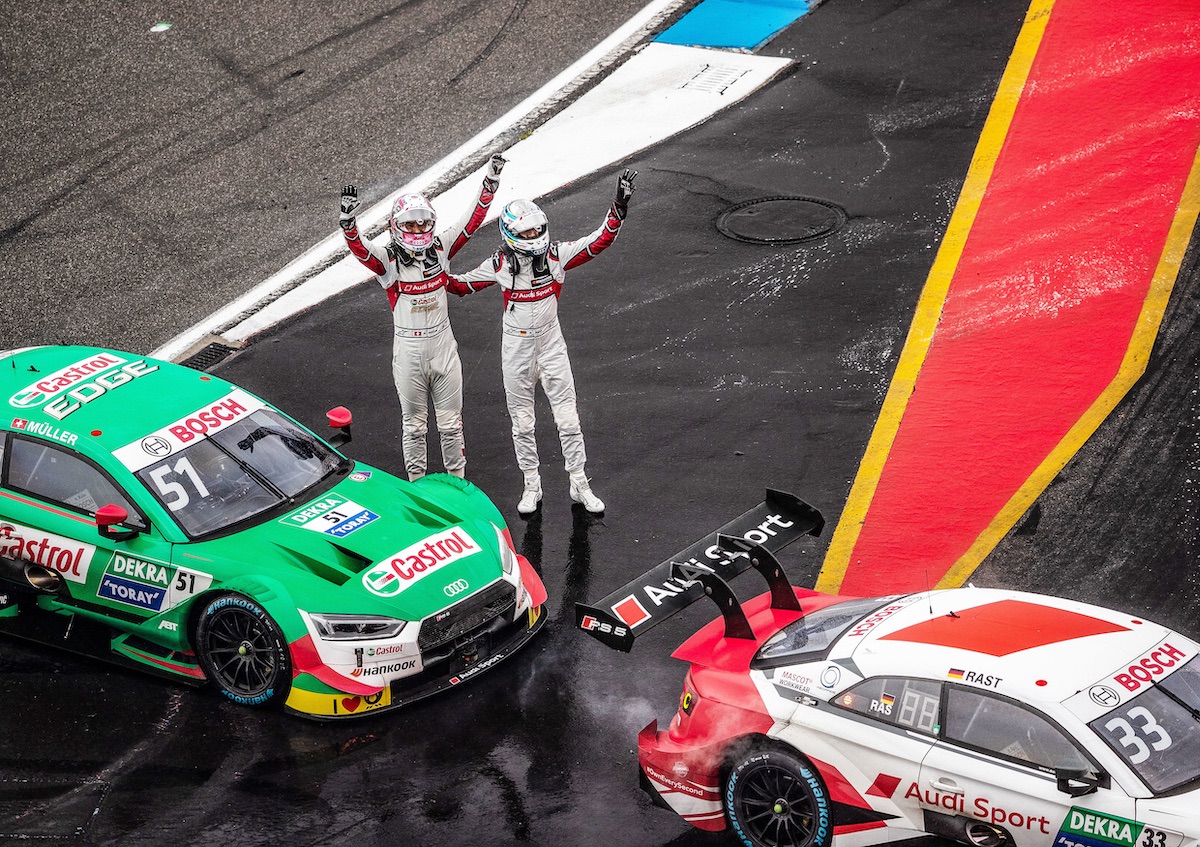 Despite being a relative newcomer to the world of Esports, the Swiss believes that online sim racing serves as a way of keeping race-fit and is also a way of engaging with the wider motorsport community.

“During these ‘corona times’ where we have a bit more time at home than expected, sim racing is a great way to get your daily dose of racing and hang out online with the guys you normally race with on the track to challenge each other and keep the competitive spirit alive,” Müller told Dyler.com. “Whilst the unique g-forces and smells and heat that come with racing a ‘real-world’ racing car could never be replaced, the software used by sim racers such as Gran Turismo is very close to what you experience in real life.

Nico Müller: “I Find that Our Fans’ Creativity Just Keeps Evolving and I’m Already Looking Forward to What the Future Brings”


Müller added that he was impressed with how fans have been engaging with #RaceHome and said that he hopes race teams will begin to adopt - or at least draw inspiration from - the fan designed liveries he has seen submitted to #RaceHome. 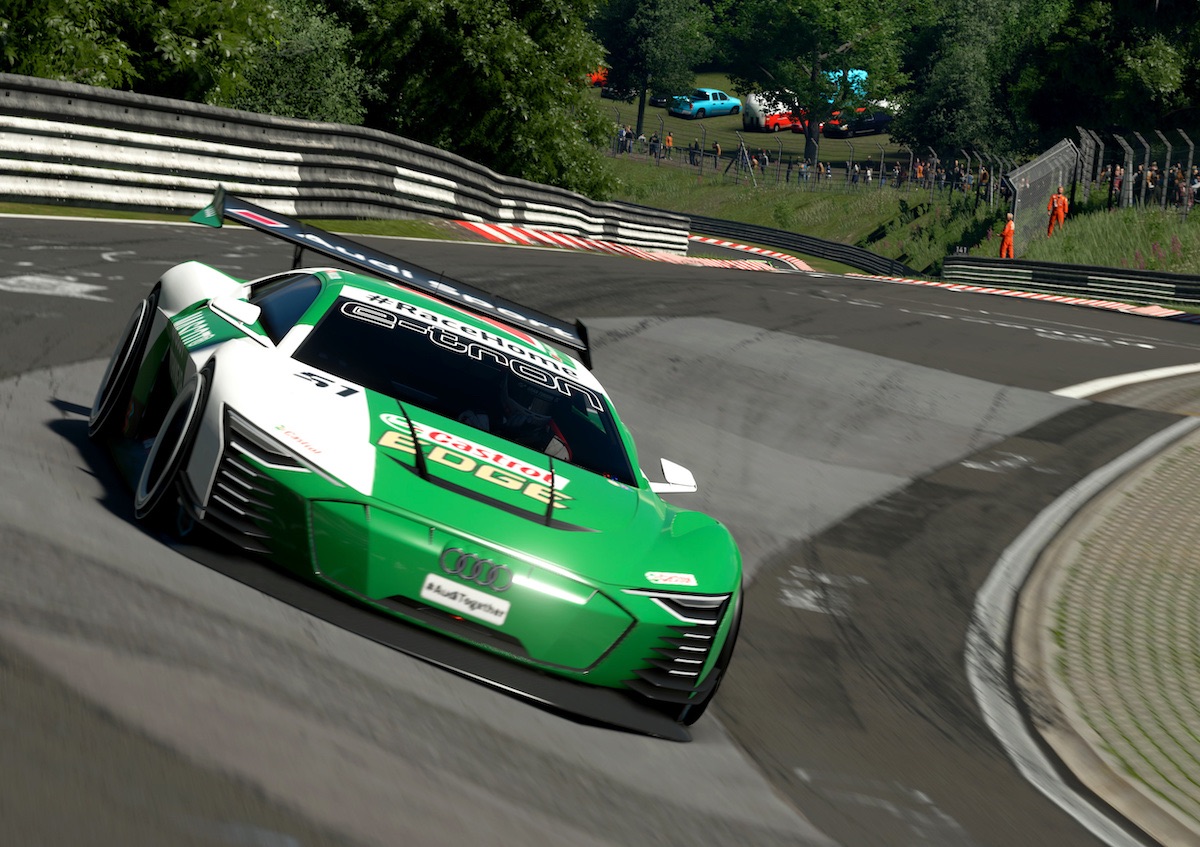 “There have been some really, really great fan liveries, and the creativity, passion and motivation to join #RaceHome has been amazing to see,” he continued. “When we race each week, I find that our fans’ creativity just keeps evolving and I’m already looking forward to what the future brings!

“Many of the fan designs seen on #RaceHome have been inspired by iconic race car liveries from the past, so why shouldn’t we turn that around? It would be very nice in the future if teams took some inspiration from what our fans made in virtual world! I think that’s definitely something to look at!”

Alongside his DTM drive with Audi - a seat he has held since stepping up to the series in 2014 from Formula Renault 3.5 - Müller is also a regular driver in Formula E. 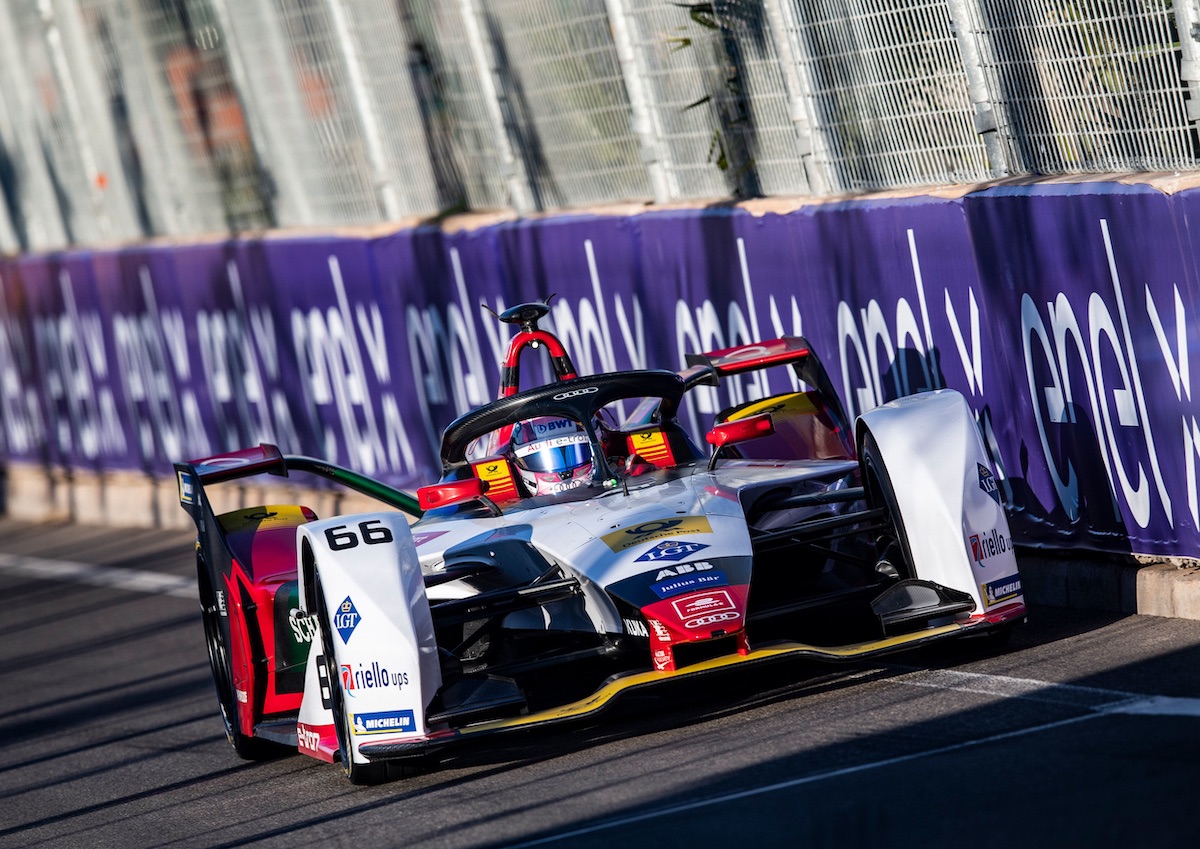 During the 2017/2018 Formula E season, he was the official test driver for the Audi Sport ABT Schaeffler outfit. For the suspended 2019/2020 season, Müller has moved to a full-time race seat with the GEOX Dragon team alongside former two-time FIA World Endurance champion and ex-Formula 1 driver, Brendon Hartley.


Based on his experience in Formula E, Müller said that the simulated delivery of electric power in his virtual Audi e-tron Vision Gran Turismo is comparable to how it is deployed in the real world.

The car is based on the Audi e-tron Vision Gran Turismo - a real-world EV developed between Audi Sport and Polyphony Digital, the creators of Gran Turismo, for use as a race taxi at Formula E races. 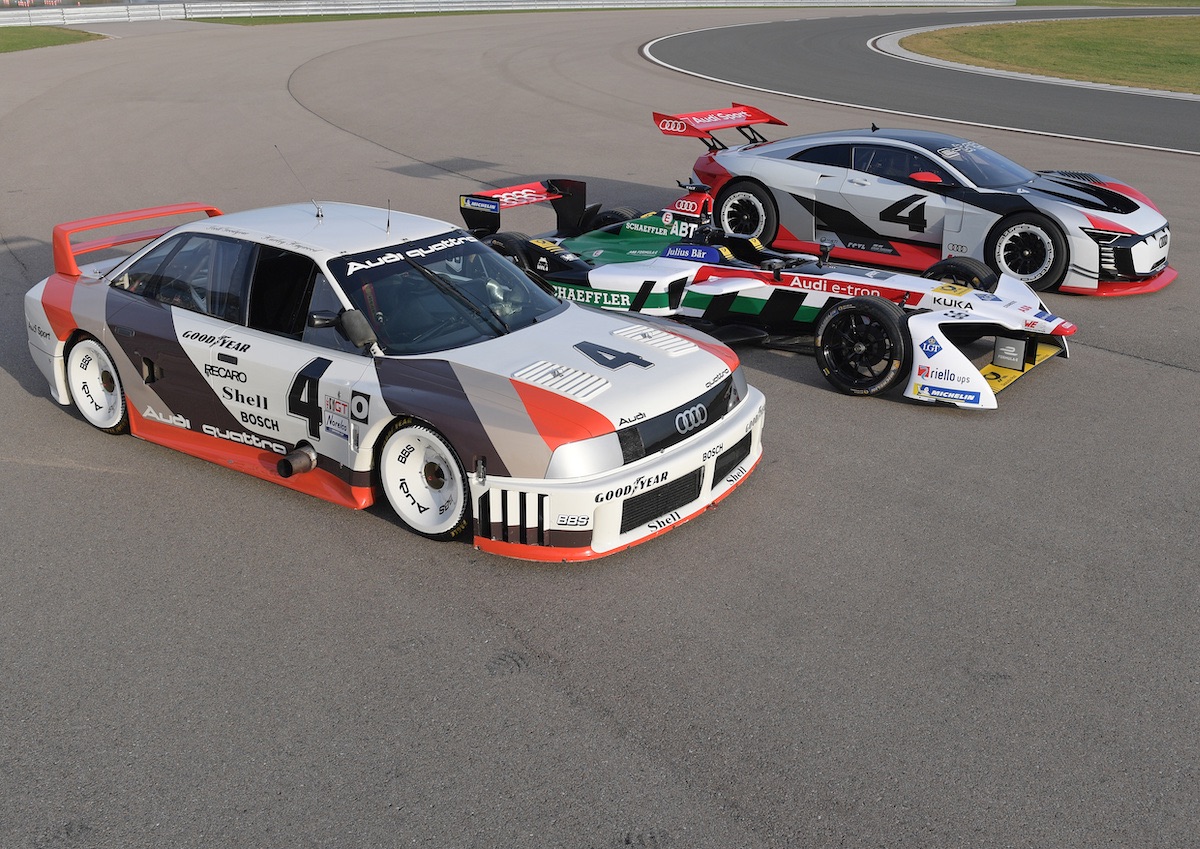 The Audi e-tron Vision Gran Turismo is powered by three electric motors which give it a total power output of 600 kilowatts (815bhp). It takes design and technology cues from Audi’s current range of e-tron EVs as well as an historic livery based on that worn by the legendary Audi 90 quattro IMSA GTO of the 1980s. It is driven by Audi’s pioneering all-wheel-drive quattro drivetrain.

Nico Müller: “Having the Audi Quattro System is Obviously Something We are not Completely Used to as We don’t have It in the DTM, but It Helps a lot to put the Power Down”


“Gran Turismo has done a really good job in transferring the physics that the Audi e-tron Vision Gran Turismo has in reality to the virtual world - so yeah, it does feel like it would in reality!” Müller explained. “Like in a real electric race car, its power delivery is instant and we don’t have to wait to reach a certain rev-range for optimal torque and performance delivery as we may be used to. You pretty much have all of the power available immediately and that makes it very exciting!

"Overall though, the Audi e-tron Vision Gran Turismo is super fast and we’ve seen it reach speeds above 380 kilometres per-hour at the Nordschleife, so it feels incredible because you never see or experience these numbers in reality. 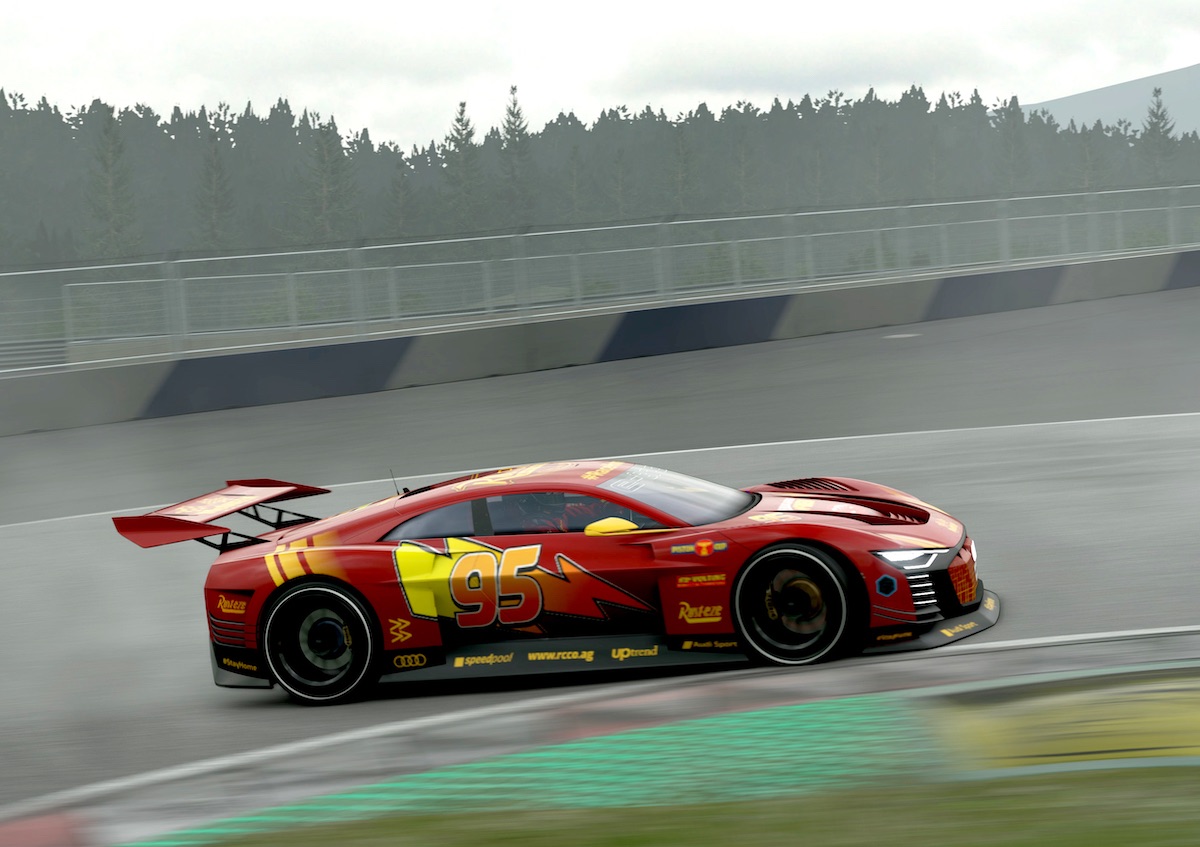 "Having the Audi quattro system is obviously something we are not completely used to as we don’t have it in the DTM, but it helps a lot to put the power down and give you great traction out of the corners. I think one more unique characteristic of this car is probably the brakes - you need them to be properly sorted to distribute the energy in order to make the car work properly."


Müller added that when Audi withdraws from the DTM at the end of the 2020 season, he could be tempted to make the switch to an electric racing series.

Should he do so, Müller would be the second works Audi driver in as many years to have made this move. For 2020, his former DTM teammate Mattias Ekström moved to Cupra to lead the Spanish brand’s assault on the all-new, all-electric eTCR series. 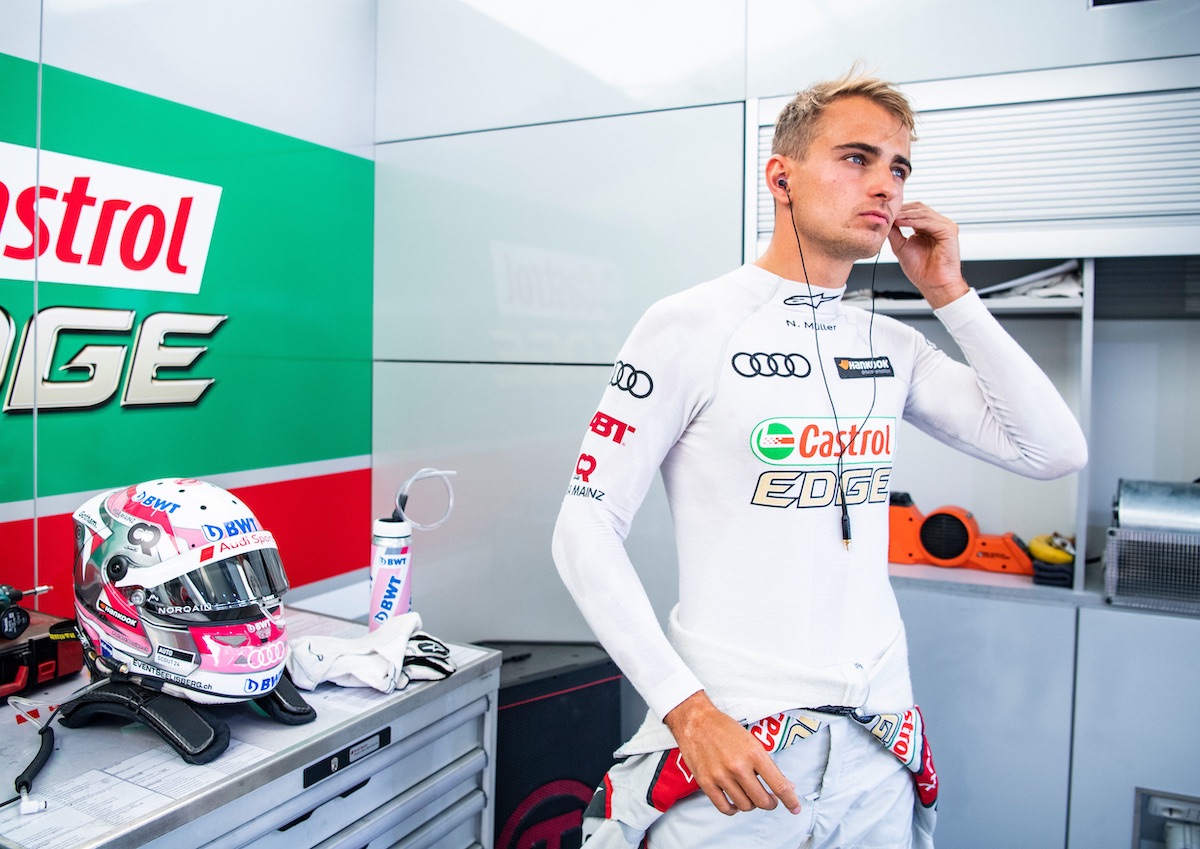 Will 2020 be the year that Nico Müller wins the championship for Audi in its final year of DTM?
© Audi Sport

“As for my future, what can I say?” he asks rhetorically. “I’m definitely open to new things! I’ve always loved new challenges and I’ve always found driving new cars and competing in new championships very exciting.

“I’m a big DTM fan and I hope the series has a future. This is something I really believe in because that’s my focus for now.

“However, I think we - the motorsport community - have to be open to new ideas and new concepts because Electric mobility is also on the rise and I’m already quite deeply involved with that in Formula E. I find electric race cars super exciting because they open new worlds from the driver’s perspective - you make much more of a difference on the software side than the mechanical set-up which kind of requests a rethink from our side.

“We’re not only considering cambers, tyre pressures and so on. we have to look much further ahead and that’s something I really enjoy doing because I like learning new things!”

The 2020 DTM championship will begin at the Norisring on July 10th 2020. The start date for the 2020 Formula E season is still to be confirmed.

The #RaceHome championship is streamed live on the Audi Sport FB and Twitter channels. The next round of the series will be streamed on June 16th, with the final round of the championship happening a week later on June 23rd. To be in with a chance to race alongside Nico and the other works Audi DTM drivers, please follow this link.

To take a look at the selection of Audi cars listed on Dyler.com, click here.