This new weekly feature called The Dyler.com Week in Cars is where we bring you five Modern Classics cars for sale on our site because at the end of the day, we just like them. These could be anything from first-generation hot hatchbacks, to ‘90s JDM rally weapons for the road, or supercars that once adorned the wall of every teenage petrolhead as posters. In short, if a car can be considered a Modern Classic, we’ll feature it.

Along with the selected cars themselves, we’ll also be adding some top-quality photos and some useless car trivia that you can use to bore impress your car and non-car friends alike. Oh, there’ll also be a weblink to our weekly selection, so you can take a further look around them on Dyler.com. You might also then decide to rehome one and give it a nice warm place in your garage where it’ll be well-loved. Not that we’re giving hints or anything.

We’re big fans of hot hatches of all ages, and that’s what this first edition of Dyler.com’s Week In Cars is all about. We love the fact that cars such as the Ford Focus RS and Honda Civic Type R have as much - if not more - power as supercars from around 25 years ago. We love that they’re able to handle vast amounts of power, yet simultaneously transport flatpack furniture and/or children with ease and air-conditioned comfort.

However, we can’t talk about modern hot hatches without mentioning the trailblazers - mighty little machines from the 1980s and early 1990s such as the iconic Volkswagen Golf GTI Mk1, Peugeot 205 GTi, whose low-power-to-weight ratio, punchy engines, and hatchback body-style shook the car world by combining the joy of driving with all the practicality of a family hatch.

In 2020, it would be churlish to compare first-generation hot hatches with their latest incarnations. They’re not as powerful, they’re not as practical, and if we’re being honest, they’re nowhere near as sophisticated. Yet in terms of handling and driving purity, there’s very little else out there that’ll bring as big a smile to your face. Given how they reshaped the automotive landscape some 40 years ago, these little cars fully deserve their status as Modern Classics.

I’m quite bored of waffling on now. You’re probably bored of reading me go on, too. Without further fanfare, these are Five Fine Modern Classic Hot Hatches we’ve selected this week for the first edition of The Dyler.com Week in Cars. 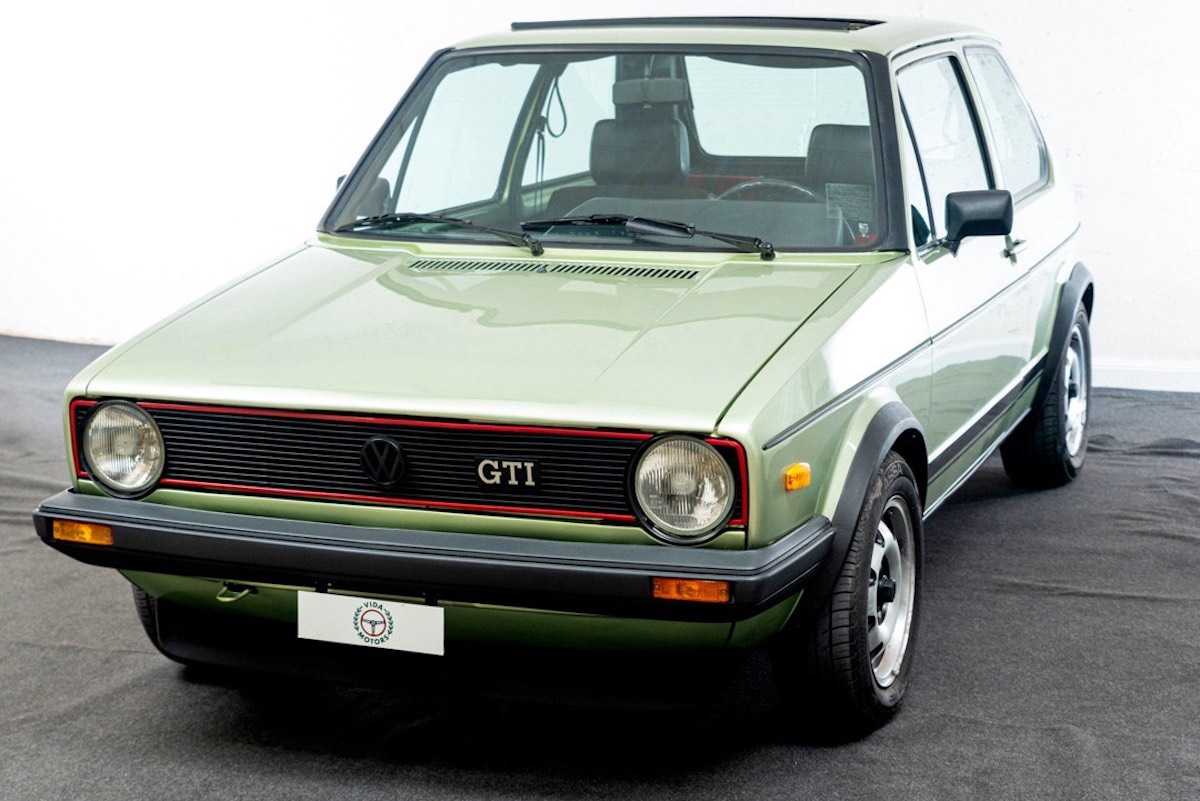 No list of hot hatchbacks would be complete without the Volkswagen Golf Mk1 GTI - the godfather of all hot hatches. Launched in 1975, the Giugiaro-designed Golf GTI was the one that started it all. Volkswagen proved it was possible to get a fun and spirited driving experience from a small, front-wheel-drive family hatch. Early Mk1 Golf GTIs were powered by a 1.6-liter engine taken from an Audi 80, which was good for 108bhp, whilst later models enjoyed a 1.8-litre motor, which upped the power to 112bhp. By today’s standards, this isn’t a lot, especially when you consider that the latest top-spec Golf GTI - the Mk8 - will produce 350 horses in Clubsport spec. Yet the Mk1 GTI weighed just 810 kilograms. Its low-weight combined with VW’s peppy engines gave the car a sub-10 seconds 0-62mph time, and created a sensational driving experience that is still enjoyed today. If you’re looking for a Mk1 Golf GTI, you’ll have to look hard for one that’s not been messed around with and be prepared to pay decent money for it. If you find a good one and decide to invest into an iconic car that’s only appreciating in value, you’ll be buying a bundle of laughs and a piece of automotive history.

PRICE:
EUR 18,500
LINK TO CAR AND DEALER:
ViDa Motors
USELESS CAR FACT:
In North America, Volkswagen marketed the Mk1 as the Rabbit because it was positioned as a cheap, young persons’ car, and they thought Golf sounded too similar to a sport played by old, rich people. 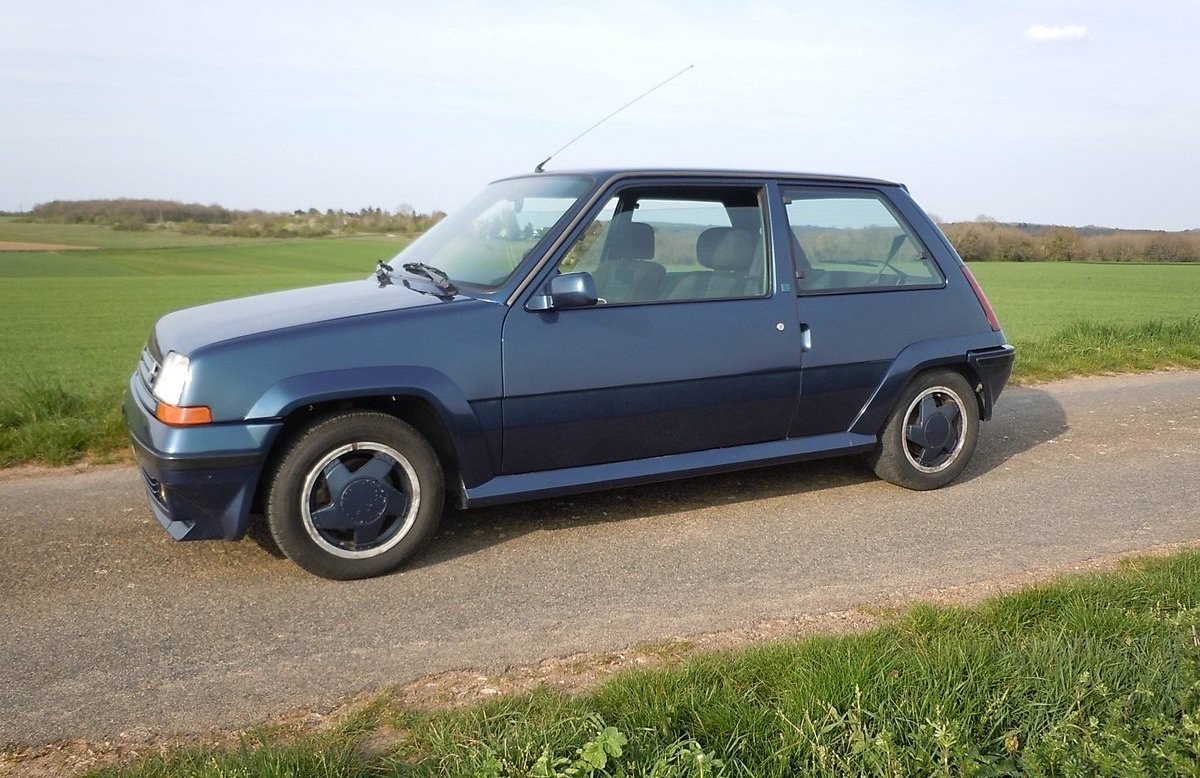 Launched in 1985, the Renault 5 GT Turbo is everything a turbocharged classic hot hatch should be. Yes, its turbocharging tech is stuck way back in the 1980s, but as anyone who enjoys cars knows, talking about turbo lag with your mates earns you bragging points. The 5 GT Turbo is still quick for today’s standards, and its 1.4-litre turbocharged engine took it from 0-62mph in just 7.5 seconds. Like most of its contemporaries, power steering is non-existent, but in our current world of electronic driver aids, this is seen more of a blessing as the lightweight 850kg Renault is still praised for its engaging driving experience and smiles-per-gallon. After all, if it made it onto TV’s Richard Hammond’s list of iconic cars, who are we to judge? Like the Mk1 Golf GTI, do look for a Renault 5 GT Turbo that’s been well-taken care of and not ragged to within an inch of its life. Then promise us you’ll love it some more, because this is the least this little car deserves.

PRICE:
Price On Request
LINK TO CAR AND DEALER:
WoowMotors
USELESS CAR FACT:
Now considered a fine example of a modern classic hot hatch, the Renault 5 GT Turbo was the star of the 2002 Sasha Baron Cohen comedy, Ali G Indahouse. During the 1990s, the 5 GT Turbo had a reputation for being often heavily modified and driven badly around industrial estates to the sound of drum and bass. Thankfully though, those days are long gone. 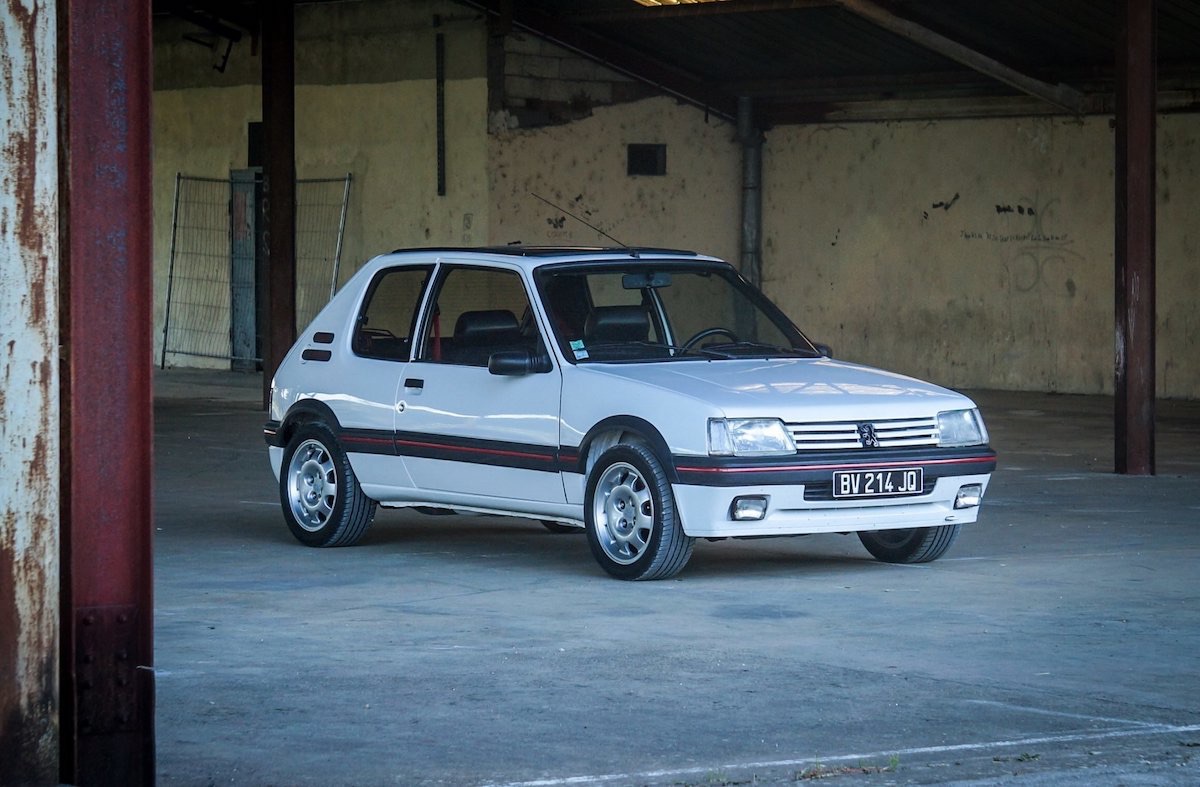 The Gerard Welter-designed Peugeot 205 GTi is widely considered to be one of the greatest hot hatchbacks of all-time. In fact, some car journalists claim it to be THE definitive hot hatch. Weighing in at just under 900kg, the 205 GTi was released in 1984 and went out of production a decade later. The 205 GTI won immediate praise from the motoring press for its revvable engines, surefooted handling, and finely-tuned chassis. Early cars were powered by a naturally-aspirated 1.6-litre motor which boasted 105bhp and a top-speed of 116mph. In 1986, a more powerful 205 GTI was released. Its power was upped to 130bhp, and it produced a thoroughly respectable top-end of 127mph. Like all the other cars on this list, many 205 GTIs were on the receiving end of some pretty rough treatment during their lifetime. But if you can find one that’s been well-loved and/or restored, you’ll sleep well at night knowing that you own one of the finest drivers’ cars of all time.

PRICE:
Price On Request
LINK TO CAR AND DEALER:
WoowMotors
USELESS CAR FACT:
In 1992, Peugeot UK revealed a special limited edition of the 205 GTi to celebrate BBC Radio 1’s 25th birthday. Called the 1FM, the was only available in black with bespoke ‘Radio1FM’ badging and decals, grey alloy wheels and individual brass-plate numbering marking the build number. A total of only 25 205 GTi 1FMs were built. 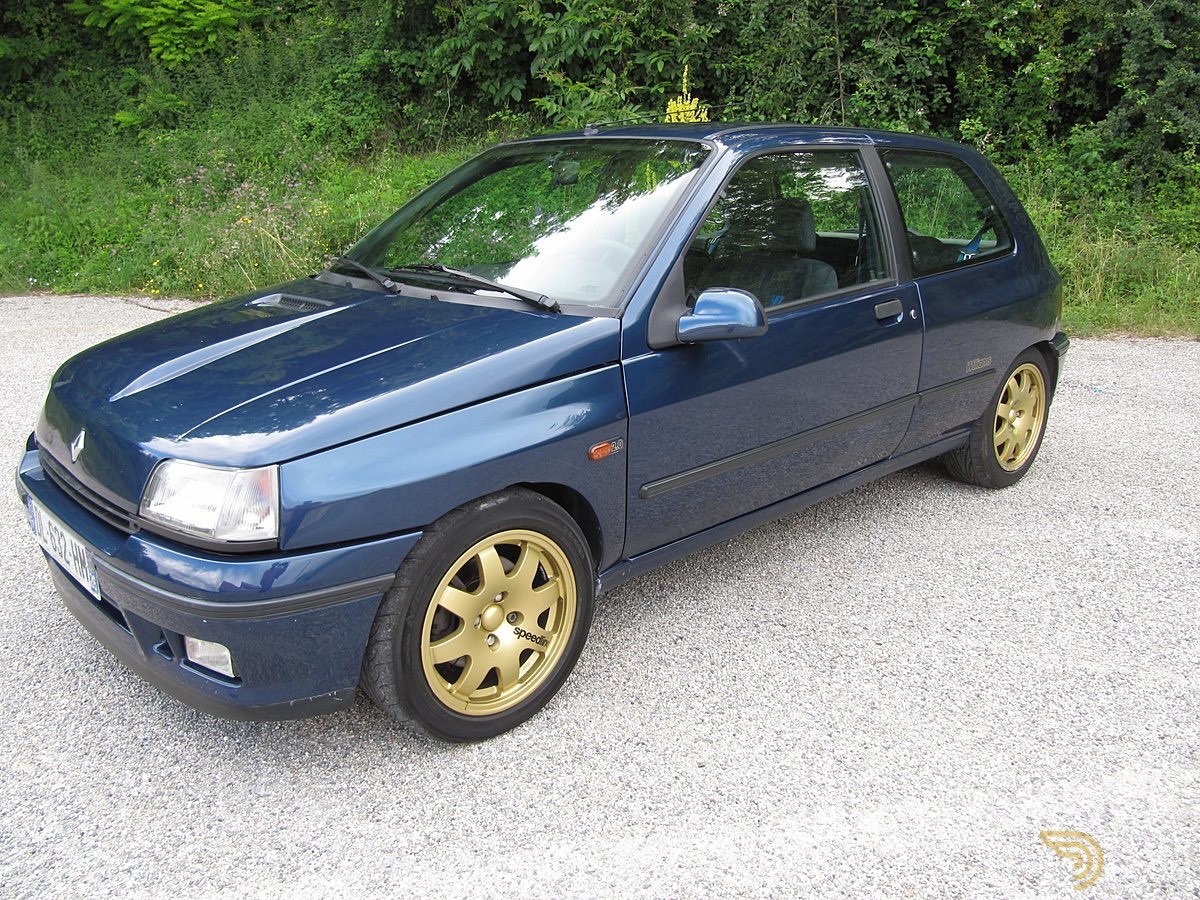 The Renault Clio Williams was described by EVO magazine as a car that “put the Peugeot 205 GTI in the shade”. High praise indeed. Released at a time when the 205 GTI was reaching the end of its life, Renault decided it wanted to show arch-rival Peugeot how it was done by maintaining the essence of the hot hatch and adding in some extra comforts and refinement. The Clio Williams had a peppy 2.0-litre, RenaultSport-developed engine which was good for a limited 148bhp. Considering this little car weighed just 981kg, this made it properly quick, and thanks to a sprinkling of RenaultSport magic powder over the chassis, properly fun to drive. Whilst a 205 GTI would be skittish down a B-road, a Clio Williams would soak up the potholes and deal with the undulating surfaces thanks to its better-sorted rear axle. That’s not to say it’s a soft touch though - early cars had no ABS, and that soft part in the middle of the steering isn’t an airbag. It’s purely decorative. The Clio Williams is effectively the grandad to the Renault Mégane and Renault Clio RS - two cars considered to be amongst some of the finest drivers’ hot hatches on sale today. In our books, that’s yet another reason to be thankful to this astonishing little car.

PRICE:
Price On Request
LINK TO CAR AND DEALER:
WoowMotors
USELESS CAR FACT:
The Renault Clio Williams actually had very little to do with the Williams Formula 1 team. It was mostly a marketing ploy because the car came out at a time when Williams Renault was hoovering up F1 wins and championships. That said, RenaultSport wanted to go rallying in the early 1990s, so Renault built 12,100 Clio Williams’ just to make sure that the car’s production numbers were way above the FIA’s homologation requirement of 2,500 vehicles. 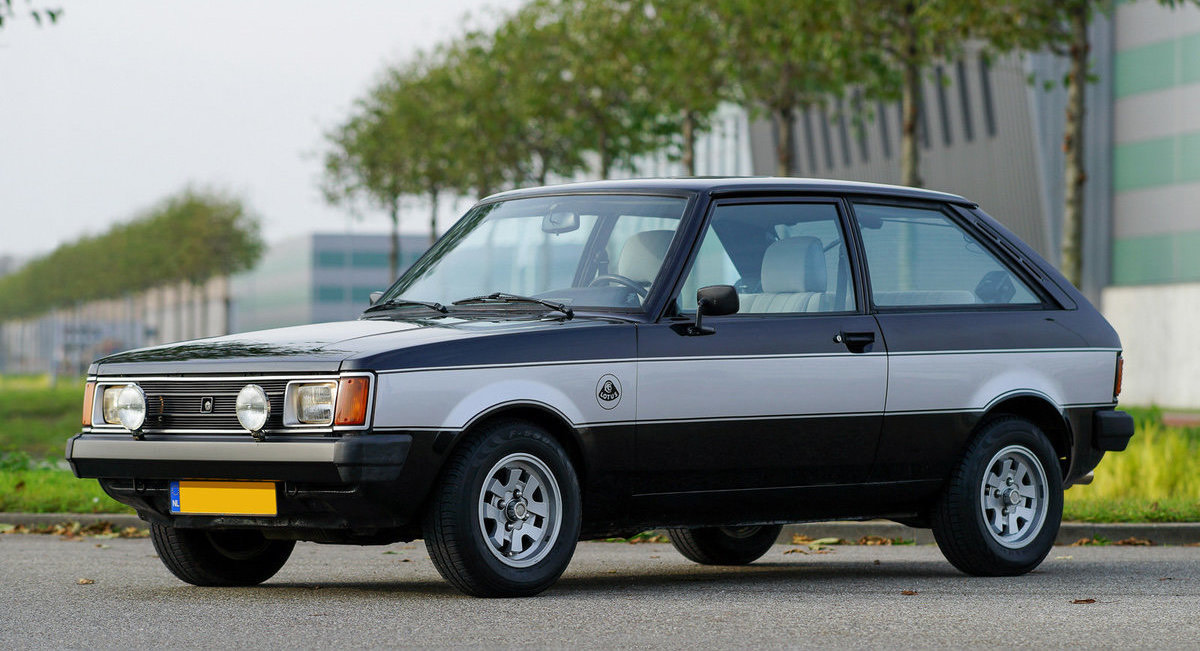 The Talbot Sunbeam Lotus is an anomaly on this list. Unlike the four other cars here, the Sunbeam-Lotus is rear-wheel-drive. It came about when Des O’Dell, then-motorsport director of Chrysler Europe (who then owned Talbot) bought a 2.2-litre, 16-valve Lotus engine with his own cash, and shoehorned into the front of its rather ordinary Sunbeam hatchback. Why? He wanted to take on - and beat - the all-conquering Ford Escort in the World Rally Championship. The production version of the Sunbeam Lotus had 150bhp, but when tuned, the rally car boasted a whopping 250bhp - still quick today, and unthinkable at the time of its launch. Only 400 of these very rare birds were made, and for all the reasons above, they rightly enjoy a cult following amongst Talbot enthusiasts.

PRICE:
EUR 27,950
LINK TO CAR AND DEALER:
Imparts Cars and Spares
USELESS CAR FACT:
The Sunbeam Lotus helped Talbot win the 1981 WRC constructors title in the 1981 with Guy Fréquelin and co-driver Jean Todt. That’s the same Jean Todt who would later go on to play a key role in Ferrari and Michael Schumacher’s domination of Formula 1 in the early 2000s.

We would also like to thank car journalist, Sniff Petrol founder, Top Gear scriptwriter, and all-round good chap, Richard Porter, for kindly giving us the Golf/Rabbit fact, and allowing us to get inspired by other useless car facts from his book, A Medium-Sized Book Of Boring Car Trivia. You should buy it here from Amazon because it’s rather excellent. It may also help you win a box of cider in a pub quiz someday.