This Week in Cars: VW Marks The Birthday of Its Legendary Golf GTI With The Clubsport 45

When Volkswagen launched the VW Golf GTI back in 1976, little did they know that they had created an icon that would go on to celebrate its 45th birthday in 2021.

The concept of the hot hatch had already been around for a few years prior to the arrival of the VW Golf - or ‘Rabbit’, if you were a US buyer - GTI. The Simca 1100TI, a car considered to be the first proper hot hatch launched in 1973, and the Renault 5 Gordini (or Renault 5 Alpine in the UK) predated the Golf by just a few months.

Yet how did VW take its humble Golf hatchback, and turn the hot GTI version into such a much-loved automotive icon?

The key to the success of the standard Mk1 VW Golf was that it was practical. As a Volkswagen - and unlike most cars from the 1970s - the Golf was also very well made, very practical and in-light of the oil crisis that plighted the decade, it was also very economical.

The interior of the Mk8 VW Golf is virtually buttonless, and the GTI Clubsport 45 is no different
© VW UK Media

The Mk1 Golf was already a light car, with a curb weight of between 790 kilograms to 970kg. When VW gave the GTI a 110bhp, 1.6-litre engine, it meant that the Golf was still the sensible, dependable car it had always been, but now it could keep up with much more expensive, and much faster (on paper at least!) machinery.

Throughout its life, there has never been a bad VW Golf GTI. Sure, the model lost its way a little bit with the heavy Mk4, but VW rebooted the model with the exceptional Mk5 in the mid 2000s and recaptured the magic that made the original car so special. Every iteration of the Golf GTI since has not missed a beat.

To celebrate the birthday of its wildly successful hot hatch, VW has launched a limited edition, 45th anniversary special of its Mk8 Golf GTI called the GTI Clubsport 45. If you hadn’t twigged already, this is the car you see at the top of this edition of our weekly This Week in Cars feature. 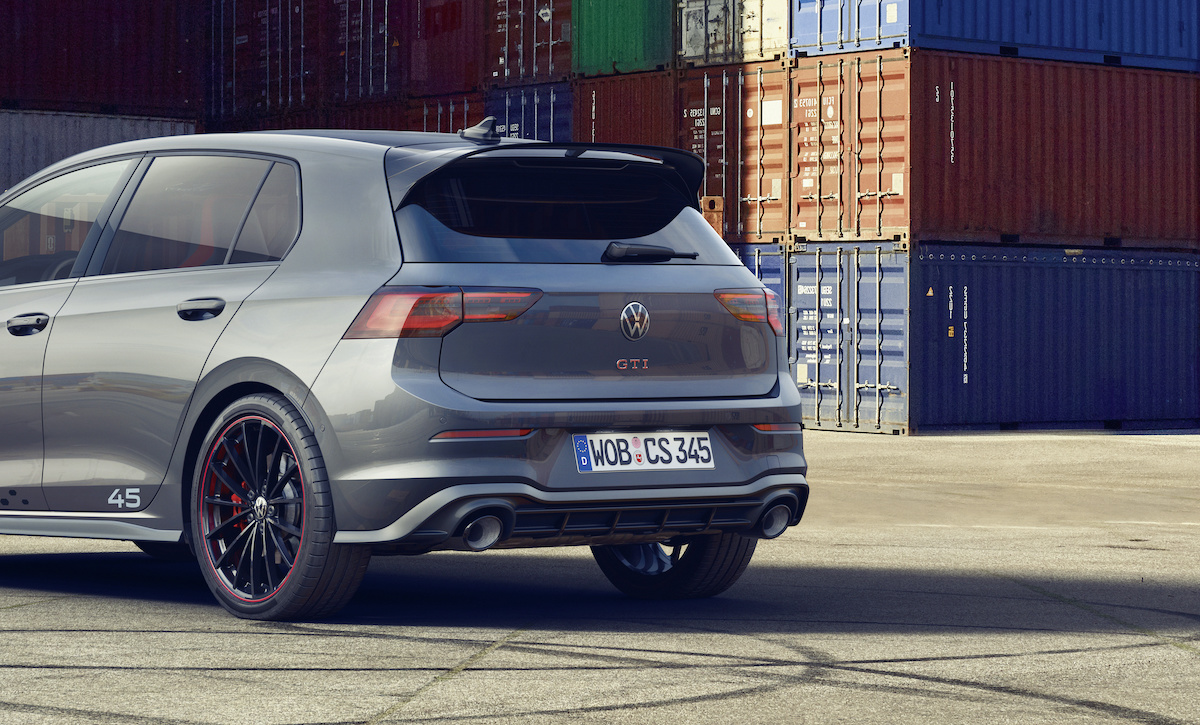 Alongside the striking performance enhancing bodykit, the Golf GTI Clubsport 45 boasts almost 295bhp, some ‘45’ badging, a (limited!) top speed of 155mph, and all new 19-inch alloys. In a tribute to the Mk1 VW Golf GTI, the Clubsport 45 also has a black roof, rear spoiler, and matching wing mirrors which are both throwbacks to the car that started the ball rolling.

Whilst we haven’t yet got our hands on a new Mk8 Golf GTI (yet!), we’re certain that it will carry on VW’s tradition of making excellent hot hatches. In the meantime, this latest This Week in Cars feature lists some of our favourite hot Golf GTI models from over the years listed on Dyler.

Oh, and happy birthday, Golf GTI! Here’s to many more. 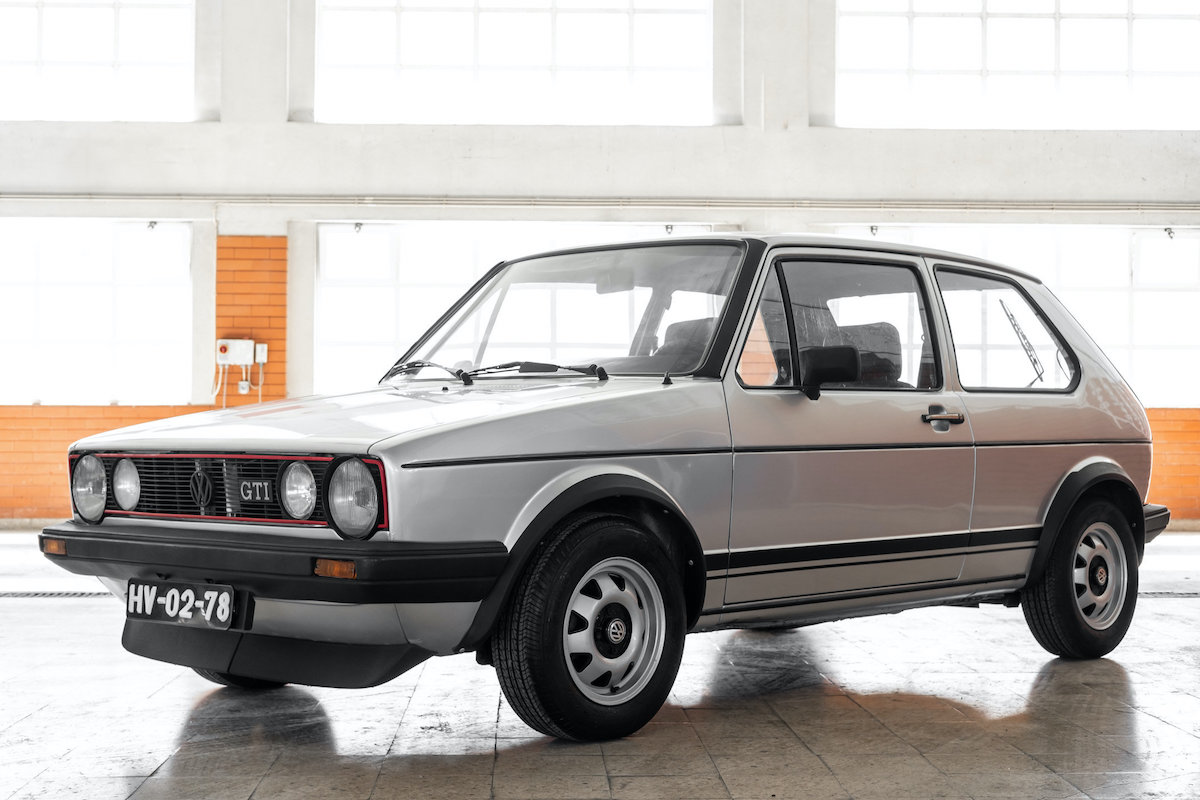 The VW Golf GTI Mk1 was the first properly usable hot hatch thanks to its blend of practicality, performance, and quality
© Cars & Co

The Giugiaro-designed VW Golf GTI was the one that started it all. Volkswagen proved it was possible to get a fun and spirited driving experience from a small, front-wheel-drive family hatch. Early Mk1 VW Golf GTIs were powered by a 1.6-liter engine taken from an Audi 80, which was good for 108bhp, whilst later models enjoyed a 1.8-litre motor, which increased power to 112bhp. By today’s standards, this isn’t a lot, especially when you consider that the latest top-spec VW Golf GTI - the Mk8 - will produce 350 horses in Clubsport spec. However, the Mk1 VW Golf GTI weighed just 810 kilograms. Its low-weight combined with the peppy Audi engine gave the car a sub-10 seconds 0-62mph time, and created a lively driving experience which is still enjoyed today. If you’re looking for a Mk1, you’ll have to look hard for one that’s not been messed around with. You’ll also have to be prepared to pay decent money for it. If you find a good one and decide to invest into an iconic car that’s only appreciating in value, you’ll be buying something that runs on smiles-per-gallon and is undoubtedly one of the most important pieces of work in automotive history. 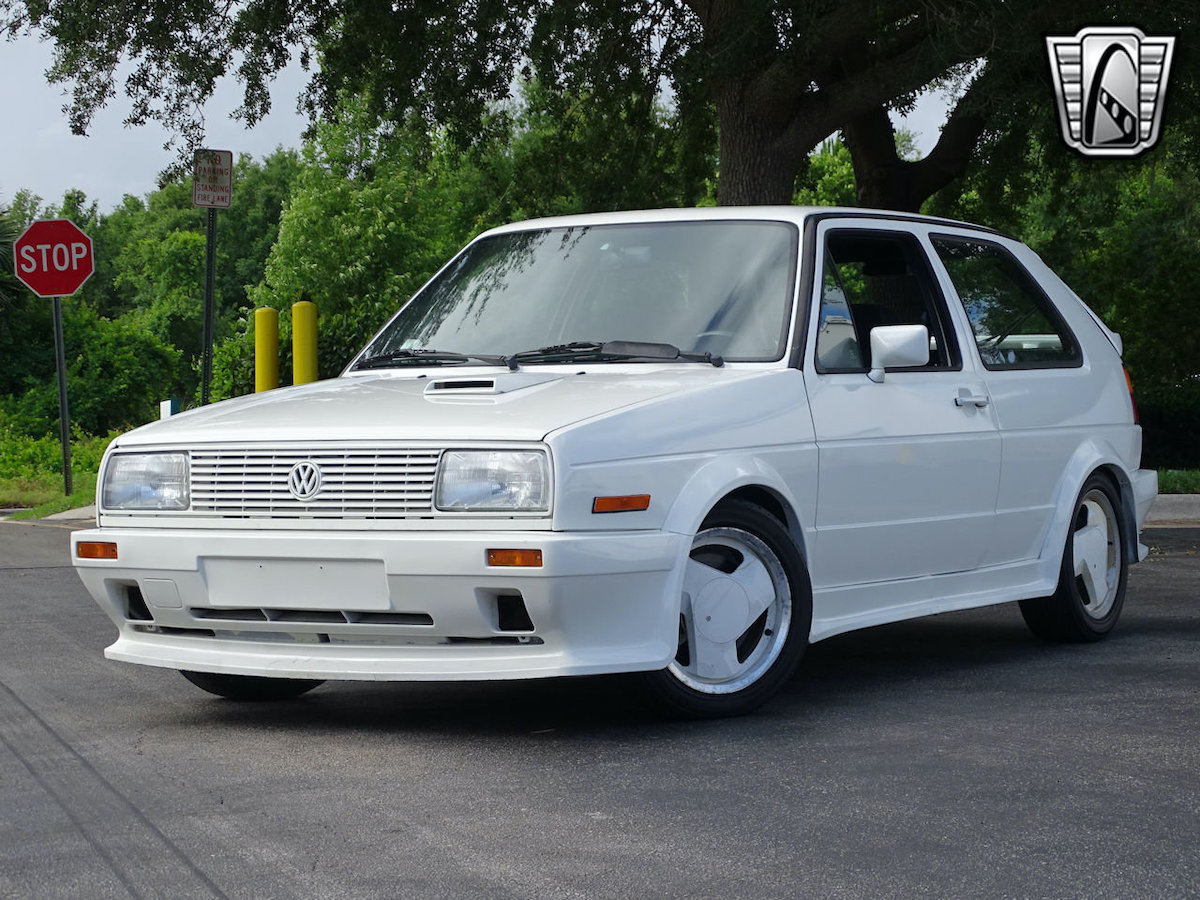 If a standard Mk2 VW Golf GTI is too ordinary for your tastes, then this full Radwood Mk2 GTI Neuspeed-Callaway should tick your boxes. The 1980s were pretty much a case of anything goes when it came to carmakers and owners letting their imaginations run wild, which is exactly what happened with the Neuspeed-Callaway Turbo. A group of US-based VW/Audi performance specialists called Neuspeed got hold of a regular Mk2 GTI, stripped it down, added the wide Hella bodykit, an all-white paint job, plus Momo road and steering wheels. Under the skin, Neuspeed added their own sway bar and lowering springs to cope with the extra power from the additional Callaway Stage 2 Turbo. Interestingly, it wasn’t Neuspeed who started with heavily modding Mk2 GTIs in the US - tuning house Callaway (whose turbos we’ve already mentioned) kicked things off by giving the Mk2 an aftermarket turbo along with a beefy set of BBS alloys and an equally chunky bodykit. Cool, innit? 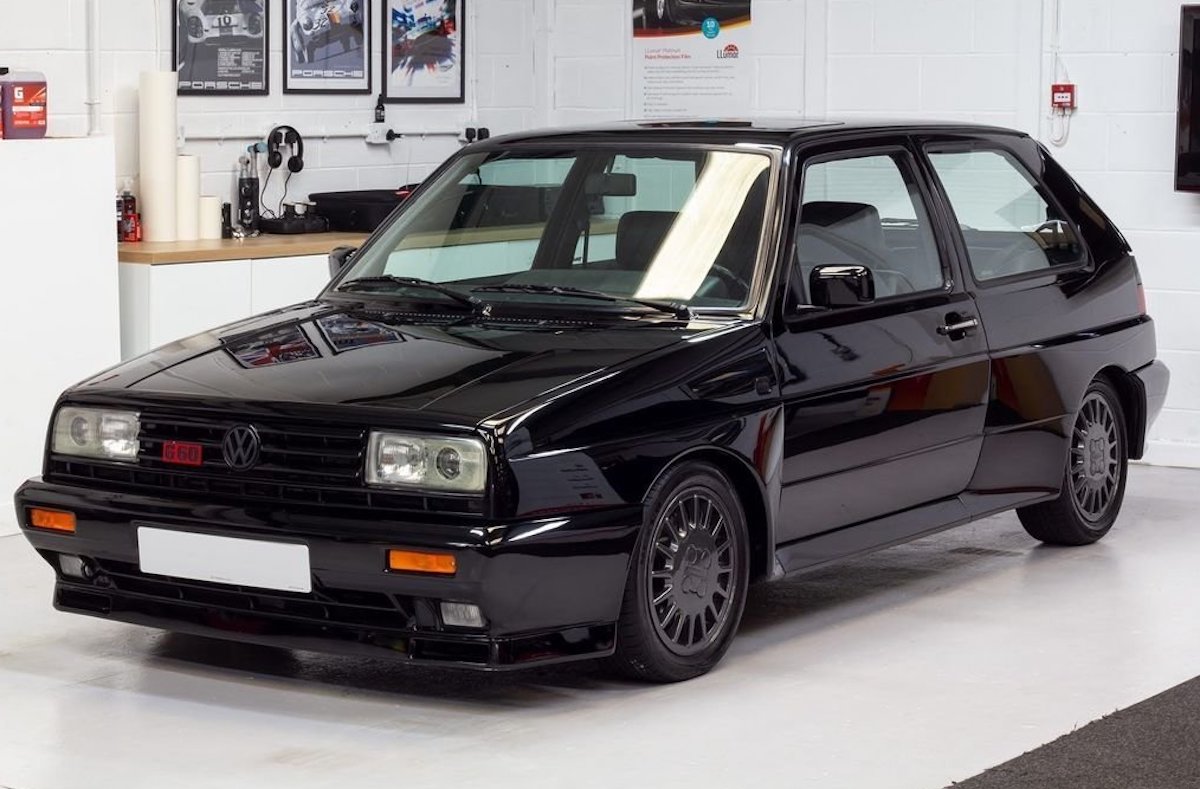 When it arrived in 1989, the all-wheel-drive Mk2 GTI Golf Rallye put down the foundations for what would become the modern day VW Golf R
© Tom’s Car Connections

Alongside the aftermarket turbocharging trend, the late 1980s saw VW produce a limited run of their own supercharged version of the Mk2 Golf GTI. The VW Golf Rallye G60 was a homologation special built by VW to allow them to go racing in rallying’s Group A category. During its one-year production run in 1989, only 5,000 VW Golf Rallye models were produced. Alongside the blocky aggressive bodykit and revised front-end (the Rallye received square headlights over the standard GTI’s circular units) VW bolted a G60 supercharger to the eight-valve, 1.8-litre engine to give its already hot hatch 160bhp and a top speed of 135mph, which is 216km/h in continental terms. To deal with the extra power and to ensure that the rally-ready cars could deal with the rough stuff on the rocky stages of the WRC, VW also fitted the Golf Rallye with a synchro four-wheel-drive system. To add to the Golf Rallye’s already high position on the Wantometre, VW fitted it with the wheels from the Corrado G60, which is one of the coolest cars from the late-1980s to the mid-1990s to have ever existed. Is the Golf Rallye the great grandad of the present-day Golf R? We’d say so… 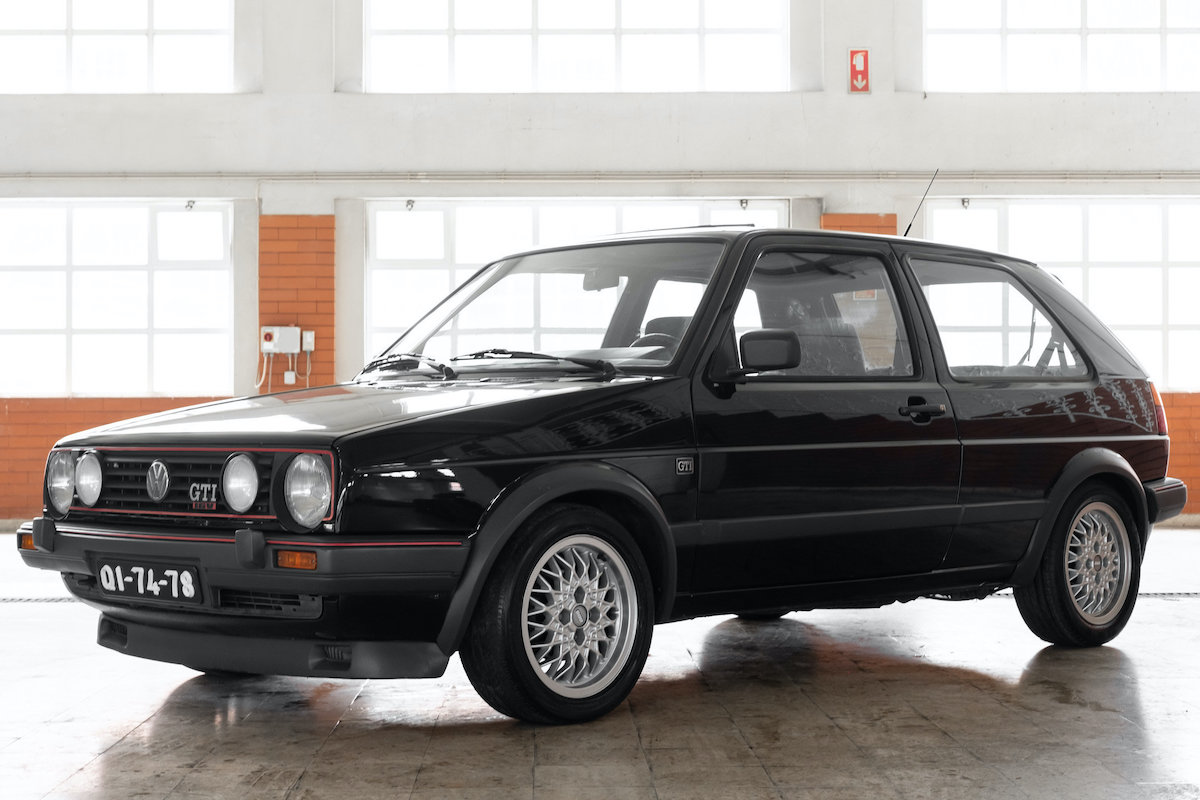 Despite a slow start to life, the VW Golf GTI Mk2 has become increasingly in demand amongst modern classic car enthusiasts
© Cars & Co

When the Mk2 VW Golf GTI came along in 1984, it was more a case of evolution than outright revolution. Wider, and heavier than its predecessor, the Mk2 was also more powerful than the Mk1 thanks to its 1.8-litre, eight-valve, inline four motor which produced 110bhp. With less power and more weight than the Mk1, it seemed that the Mk2 VW Golf GTI had arrived late to the party, especially since the smaller, much more nimble Peugeot 205 GTi became the go-to hot hatch after VW stopped production of the Mk1 GTI. However, in recent years, the Mk2 has enjoyed somewhat of a renaissance. Later cars made from 1987 onwards - especially the “big bumper” cars produced from 1990 to 1992 - are particularly sought after thanks to their instantly-recognisable shape, and improved performance thanks to a choice of either a 16-valve version of VW’s 1.8 motor, or the 2.0-litre unit found in hot versions of the larger Passat sedan and Corrado coupé. Despite a difficult start to life, the Mk2 is rising in costs. If the values of its predecessor are anything to go by, we’d advise snapping one up sooner than later. 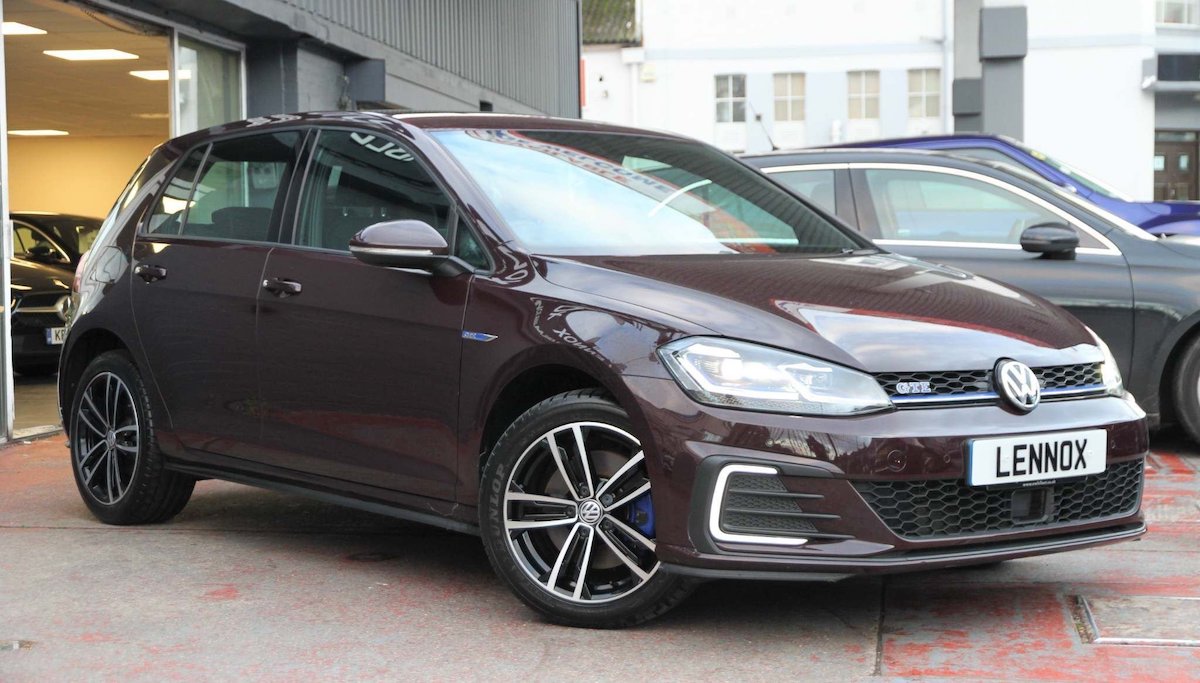 After years of experimenting with EV, the GTE was the first ever plug-in hybrid version of the Golf GTI
© Lennox Auto Limited

After the lukewarm VW Golf Mk4, the Mk5 VW Golf GTI marked a return to form for the famous name in 2003. Fast-forward 9 years, and the Golf Mk7 was a similar turning point - for the first time in its history, the VW Golf Mk7 shared a common MQB chassis with its long-term siblings, the Audi S3, Škoda Octavia and SEAT Leon. Most importantly though, it marked the mass production of a plug-in hybrid version of the VW Golf GTI, the GTE. Since the Golf was born in the 1970s, it was no stranger to electrification. In the late 1970s, VW converted a Mk1 to run on electric power. They later followed it up with the similarly battery-powered Mk2 and Mk3 Golf Citystromer cars which are increasingly rare - in fact, only one remains in the UK. When the e-Golf and the GTE launched, it showed that VW was serious about electrification. The hybrid GTE is fast, good looking, practical and well-made which is what a Golf should be. With an all-electric range of 31 miles and VW’s 1.4-litre TSI engine under the hood, it’s also good for 135mph and 0-62mph in under 7.6 seconds. With the arrival of the ID.3, there won’t be another eGolf or another GTE. For that reason alone, this is why it’s on this list.