VW Struck Gold for the Second Time with Golf

Can there be too much success? What if it overshadows everything else one has created and will ever create? How did Pink Floyd proceed after the smashing success of “Dark Side of the Moon”? How could VW replace their massively popular Beetle? We look at Volkswagen’s “Wish You Were Here” – MkI Golf.

VW Golf was not exactly the first attempt to replace the Beetle, but none of the previous designs deviated as much from the original. All of the Golf’s predecessors were still air-cooled rear-engined affairs, much like their 1930s forefather. In contrast, the Golf had a modern layout of a water-cooled engine upfront driving the front wheels, just like the Austin Minis and Fiat 128s at the time. Volkswagen advocates would even argue that the Golf popularized this front wheel driven hatchback formula in the US, conveniently forgetting the original Honda Civic, which debuted a few years prior.

Despite being radically different from the Beetle, Golf was conceived following the same ethos. It was meant to be an affordable economic vehicle that could reliably lug around a few adults with their belongings. Conveniently, VW had acquired Audi with their freshly developed front wheel drive platform, which was borrowed for the Golf. This way, all of the mechanicals were squeezed up front, leaving the rest of the boxy hatchback to passengers and their stuff. 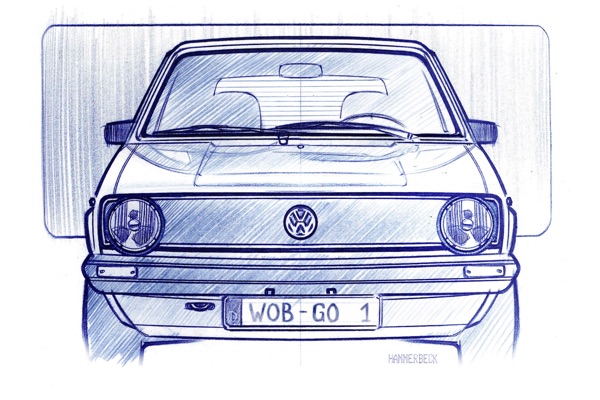 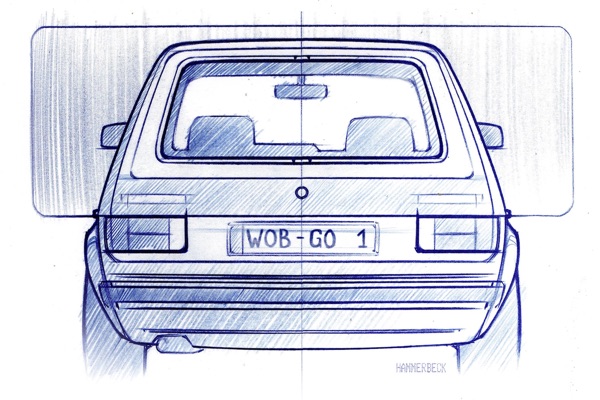 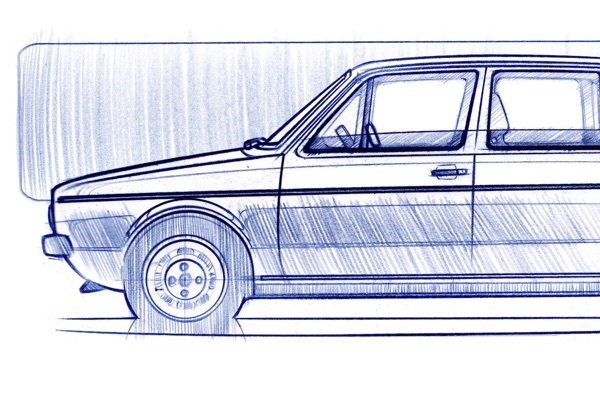 There was no shortage of R&D that went into the mechanicals of this little hatchback, but what about the looks? Luckily, the styling was not done by the rational Germans themselves, it was trusted to the brilliant Giorgeto Giugiaro of Italdesign. This man is regarded as one of the greatest designers and he gave VWs little wonder boy an immediately recognizable face. Car’s essentials were cleverly packaged in a wedge-shaped wrapper, a design language popular at the time. 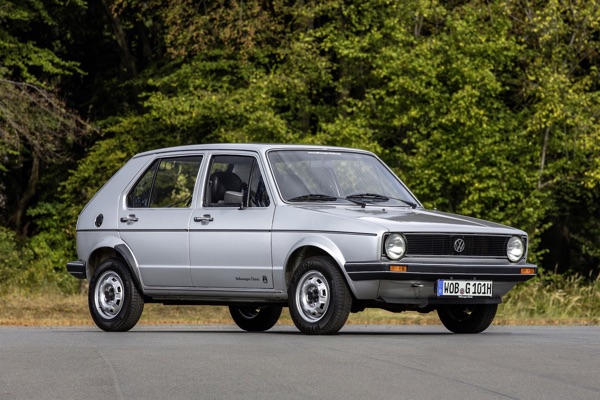 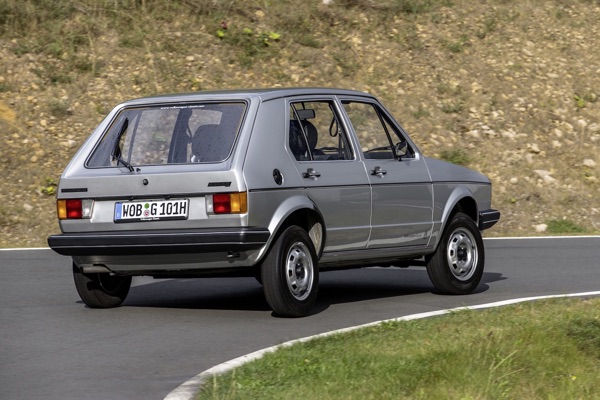 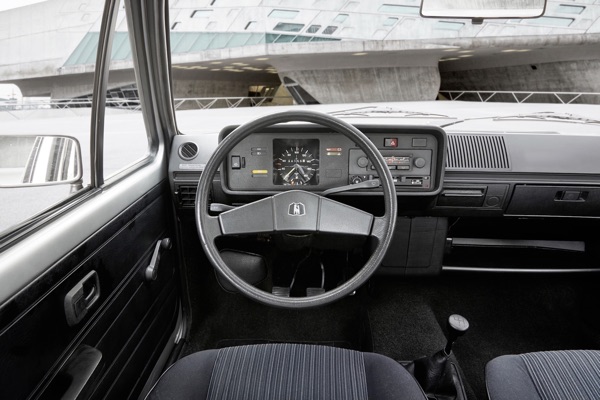 With car’s design and running gear sorted, the new model needed a name. It is a common misconception, thinking this hatchback was named after a game. Golf, incidentally, is German for Gulf, referring to the stream flowing across the Atlantic. It fits neatly with their naming strategy at the time – Scirocco and Passat were both named after winds. Little Golf was marketed as a Rabbit across the North American market, probably to avoid people associating this economical hatchback with a sport for rich people or, God forbid, white plastic balls. To think about it, Rabbit is quite a suitable name, as it conveys the lightweight, playful, almost cute nature of this car. 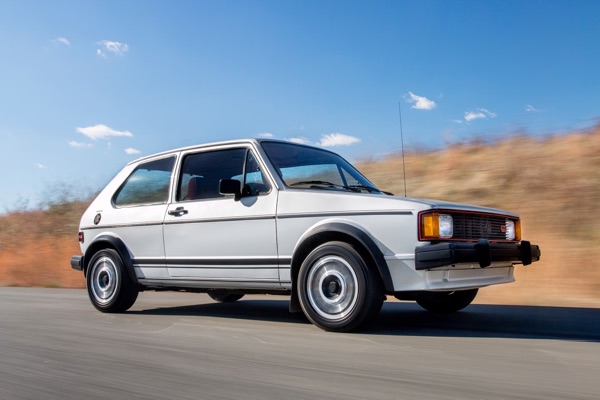 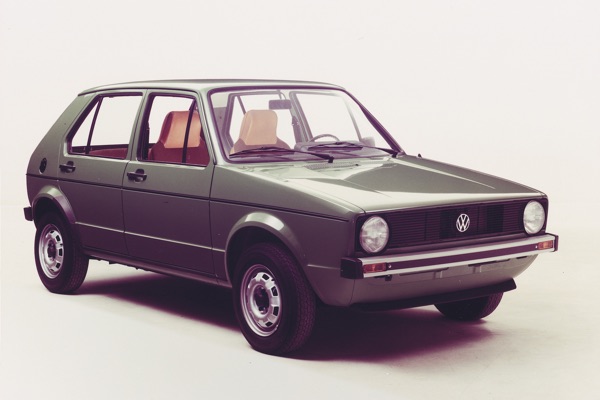 MkI was penned by Giugiaro
© Volkswagen

Volkswagen’s aim was to make the Golf appealing to virtually everyone. They made sure there are options of different flavors for those who are not swayed by their vanilla three door hatchback.

Some, especially Americans, preferred a classic three-box saloon design. There was a Jetta for them, essentially an upscale Golf with a bigger trunk. It came in two and four door guises and was quite successful – at one point becoming the bestselling European car in North America. 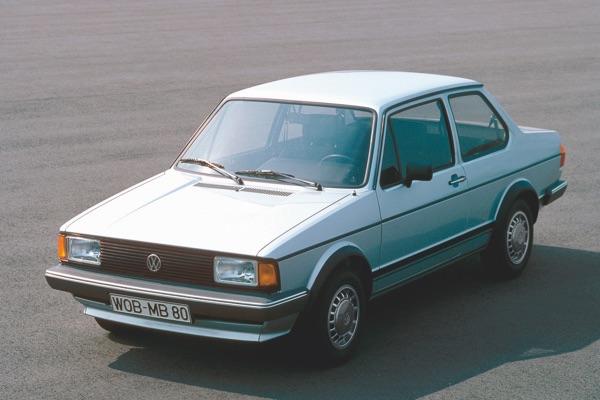 At one point, Jetta was the bestselling European car in North America
© Volkswagen 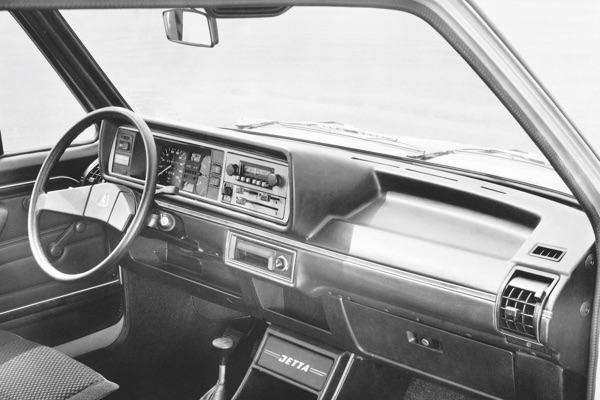 For those who needed more space, there was a five door Golf. If there was a need for a utilitarian car, there was a Caddy (Rabbit Pickup in US), essentially a Golf Pickup truck. For others, who liked the occasional wind in their hair, there was a Golf Cabriolet. Clearly, no shortage of body options for the consumer. 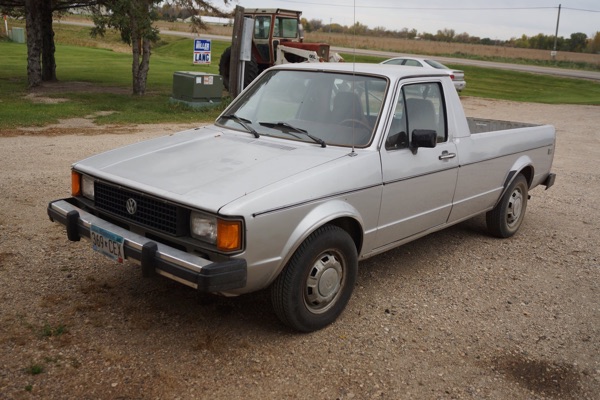 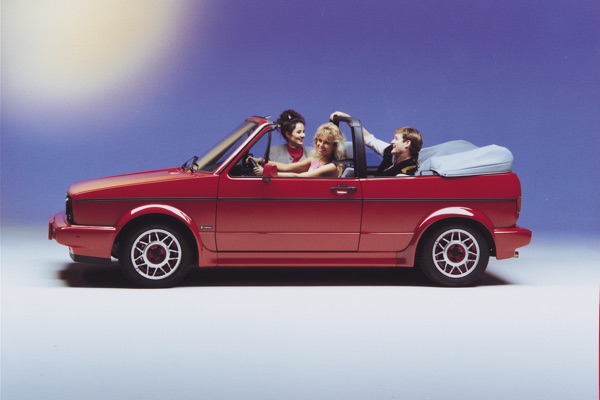 Yet, the most important Golf derivative has to be the GTI. Although it still shared the shape with all of the run of the mill Golfs, it fundamentally changed the way we look at enthusiast car and probably deserves an article on its own.

It is not entirely clear how the GTI came about, but the most popular version of the story is quite romantic and appealing. It claims that there was a bunch of VW employees who spent hours after work cooking up a sportier version of the people’s car. Something that would make owning a practical sports car attainable for a regular Joe. 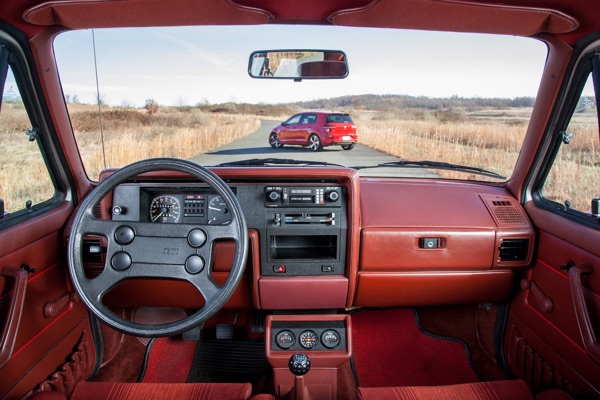 Even top of the line GTIs got pretty spartan interiors. It’s 1970s were talking about here
© Volkswagen 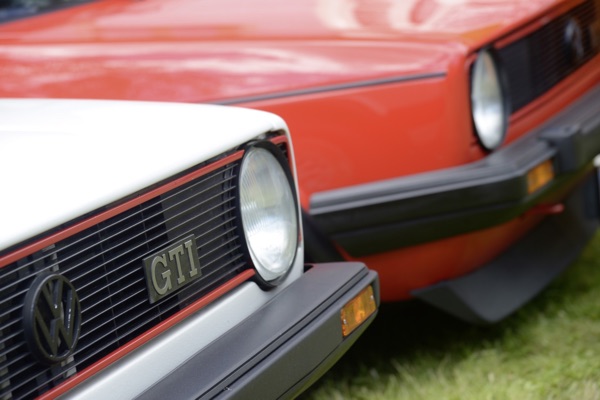 How did they do it? Well, firstly, out went the old 75 BHP engine and in came a 110 BHP 1.6 fuel-injected liter unit, which was enough to make the car a lot zippier. Then, the engineers put better shocks, springs and brakes on the car to accommodate the increased power. Of course, this mean version of Golf had to be differentiated somehow, thus it received a small bumper lip and a red stripe around the grille.

VW executives were not exactly excited about this new idea, but still proceeded with it. They could not anticipate the overwhelming response this little racer would receive at its debut in 1975 Frankfurt Auto Show. Initially, VW expected to sell 5,000 GTIs, but ended up selling around 420,000 of them by the end of MkIs production run. And the world’s need for a fast Golf has not worn down since – GTI is in its 7th generation and is still in high demand.

Additionally, the GTI has spawned a fleet of copies from other manufacturers, starting with Peugeot 205 GTI, ending with modern Focus ST. And you know what they say about imitation. And while we cannot claim that the original GTI singlehandedly brought fun back into affordable cars, but it demonstrated the demand for it.

Due to the affordability and potential of Golf, it has become a platform for modifications. Despite the wide offerings from VW, some owners still were not content with their product and started tinkering with it. Much like the Beetle, Golfs were easy to work on and modify. Soon they became tuners’ darlings, built for spirited driving, racing or just plain aesthetics. What’s more, they have retained this position till the modern day, VW enthusiasts being among the biggest car modification communities in the world. 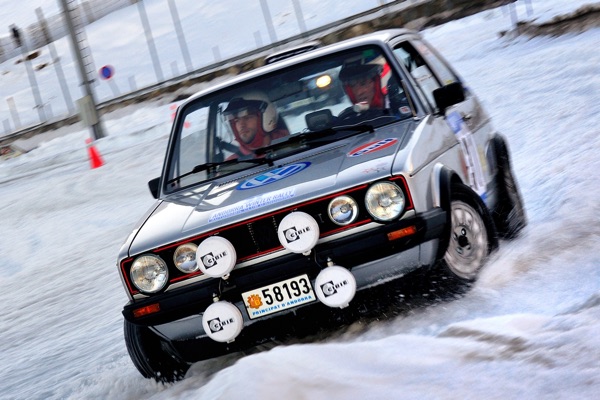 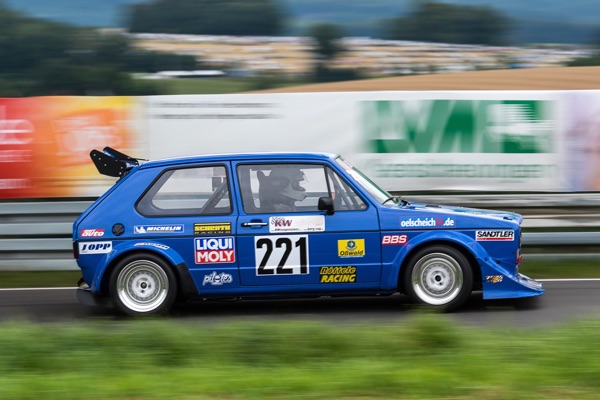 Has the Golf lived up to its forefather’s achievements? Undoubtedly. Albeit it was not the first hatchback in its class, it became a benchmark all of the competitors are compared against. Much like the Beetle, it breaks through socio-economic boundaries and has a virtually universal appeal. 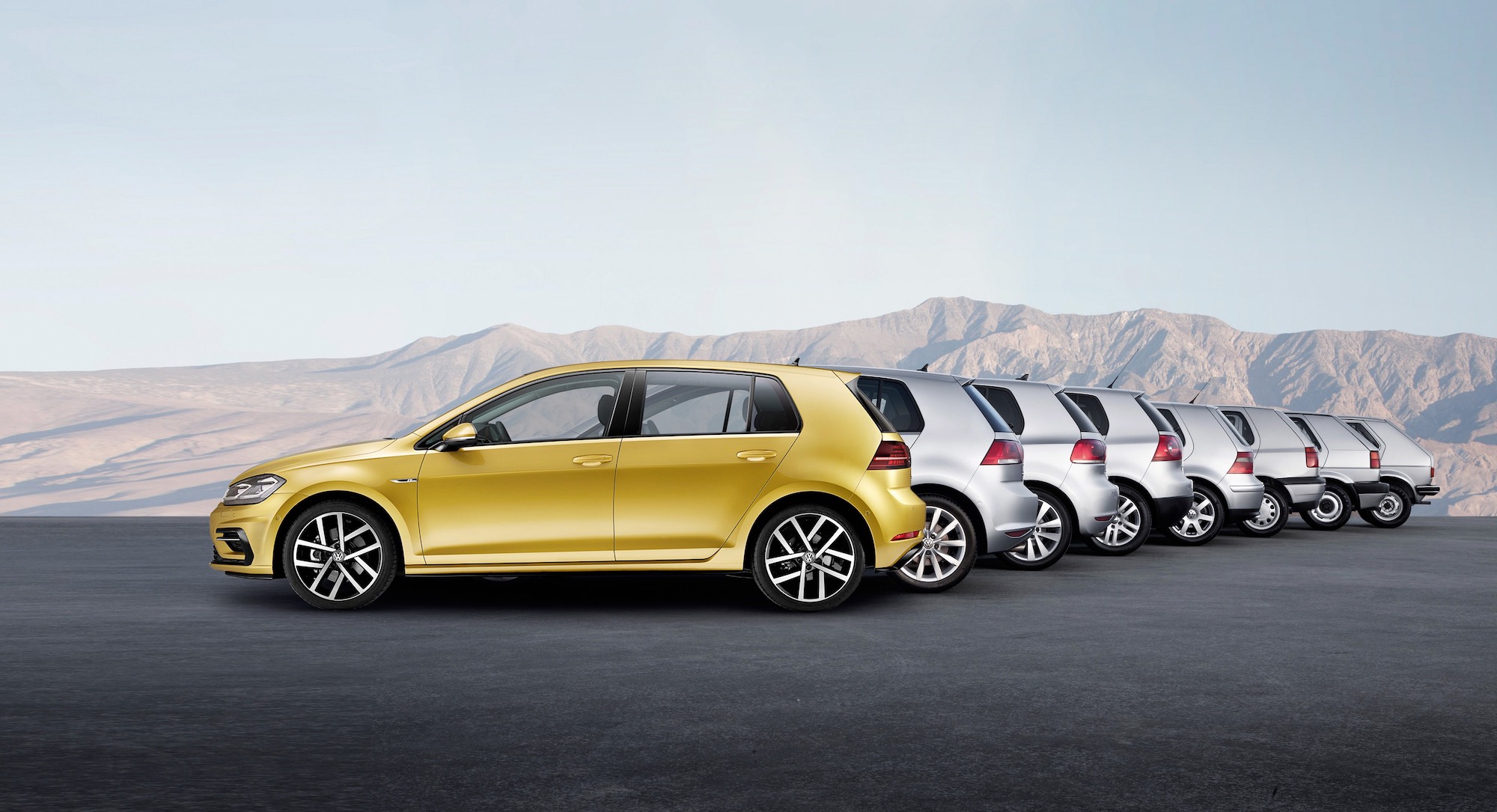